Day 2 of the Best of the Rest GT kicked off with a second Trident Realm Civil War! This time it’s crabs vs (jumping) sharks, up against the dude who would go on to win Best Sports – he got my #1 as well, thanks to him for being such a nice guy as well as meticulous player.

I had watched this army dismantle my first round opponent the Friday before the event, and yea, I’m a fan of it. Frogs are probably the most interesting troops in the Trident list these days, even with being able to disorder flying. Toads I’m not sold on, though ironically I was talking to Kara Brown the night before about how disappointing they are, and the conclusion was Me 3+ would go a long way to help make Dambusters real. Naturally this list has a big ol’ toad hammer that hits on 3+. Solid.

Round 4 was Control. The Scuttlin’ Realm went first, prrrrrobably not by choice. 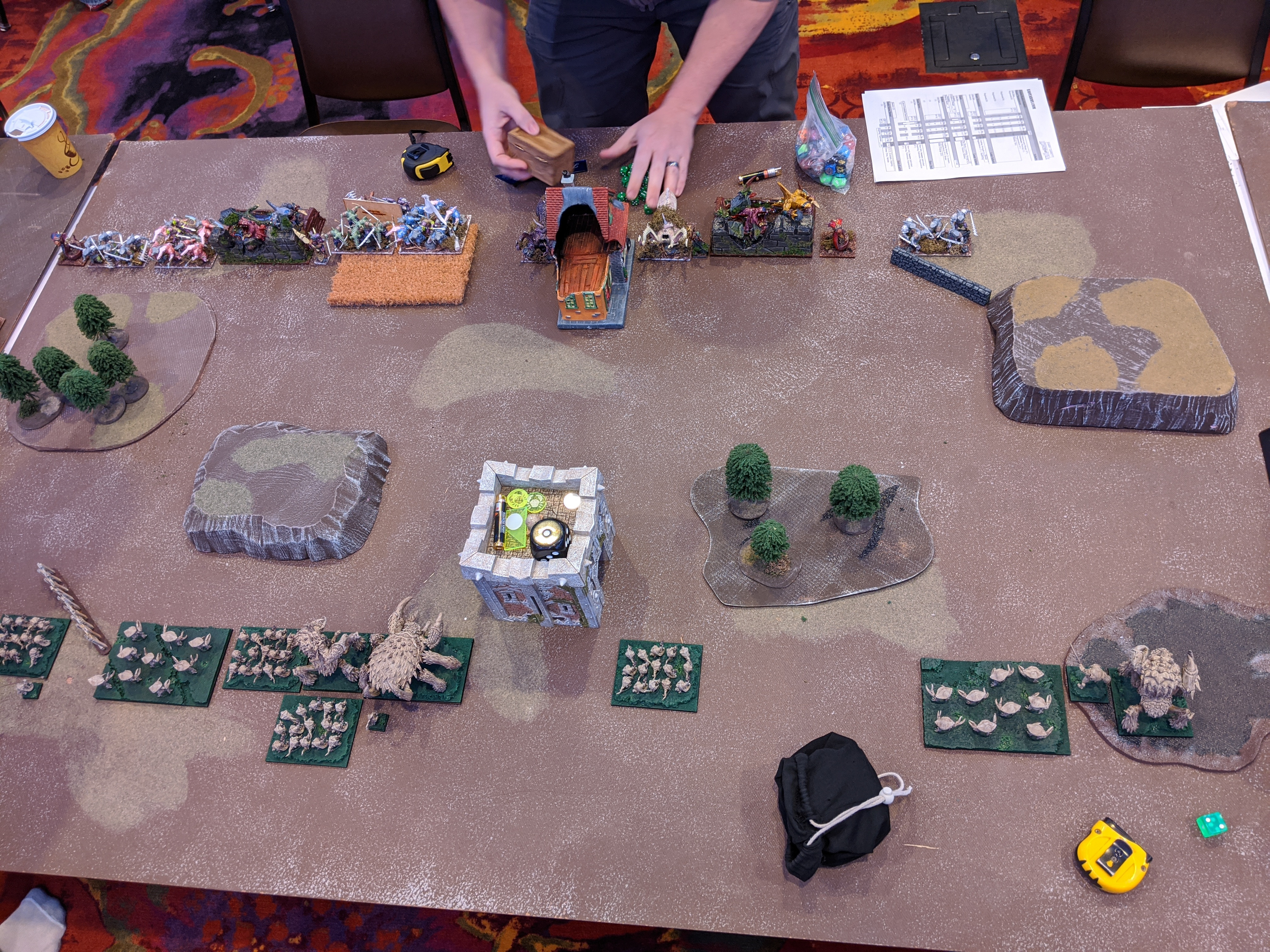 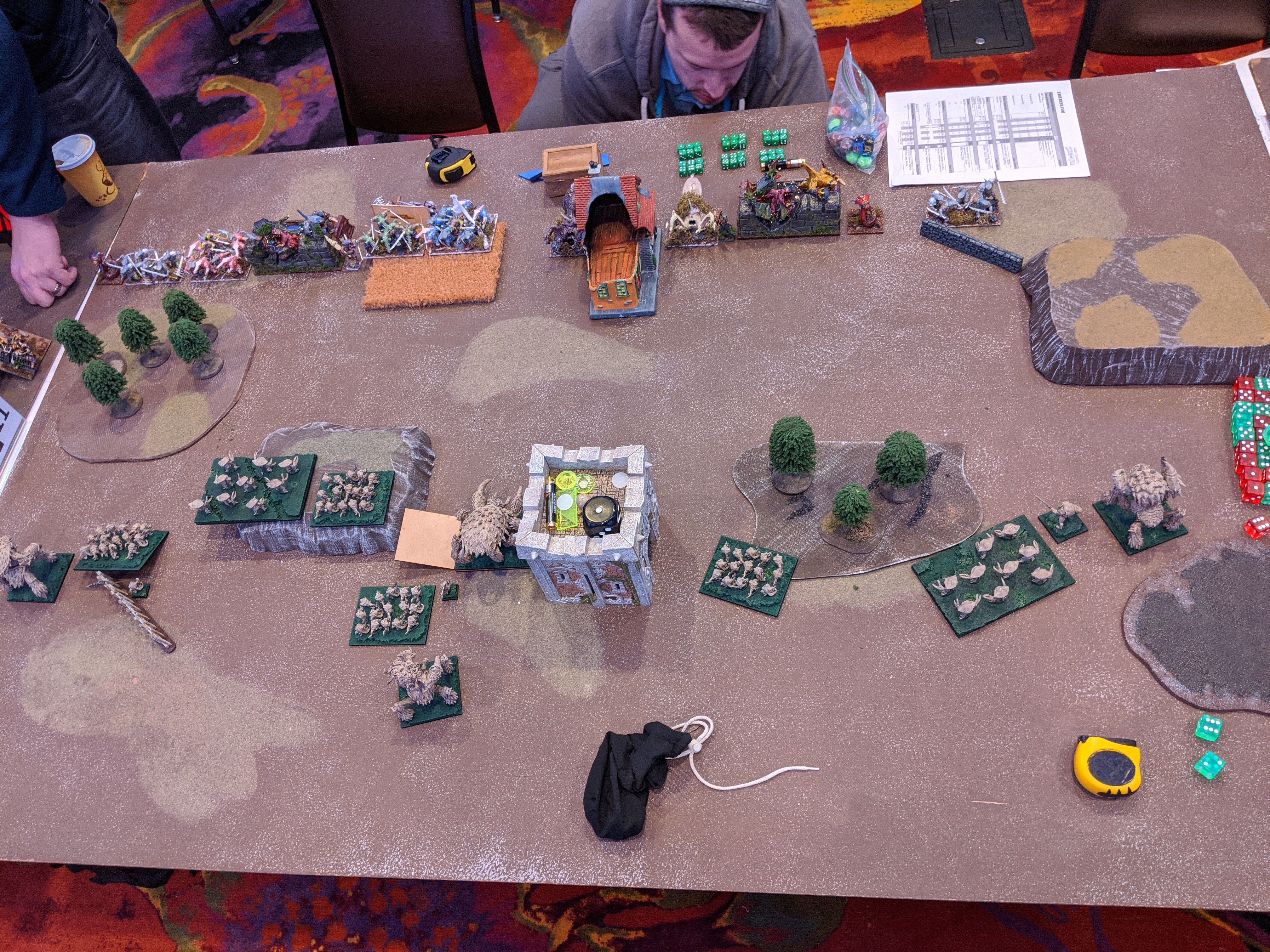 Crabs scuttle up. Krakens project force. Lamentably the right Gigas couldn’t toe that forest with their 5” move. That blank base next to the Water Elemental crab is a Kraken. 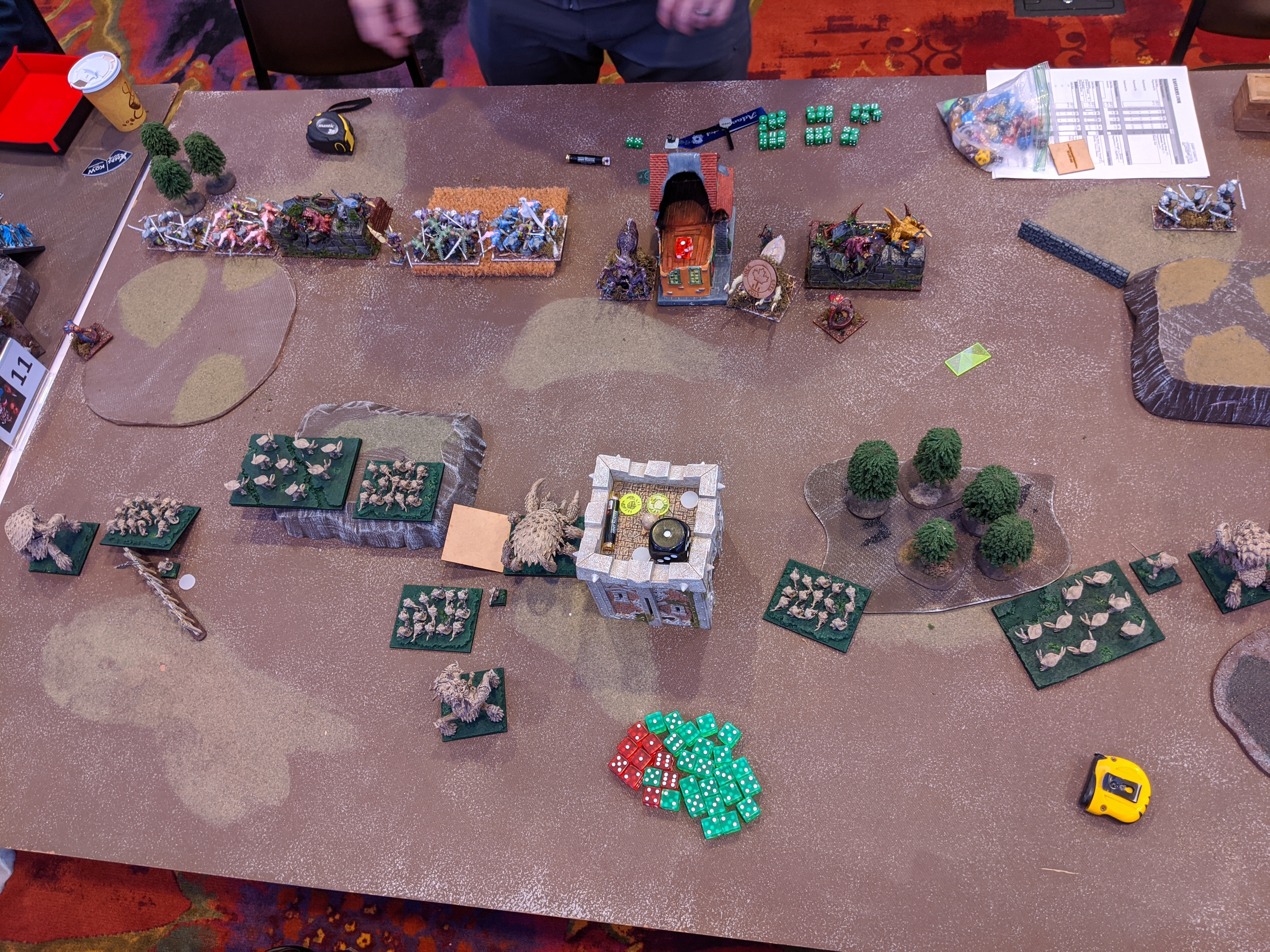 Sharks scooch forward, but mostly it’s about the Knuckers. The Kraken gets bastion and my own bastion Envoy gets hexed! 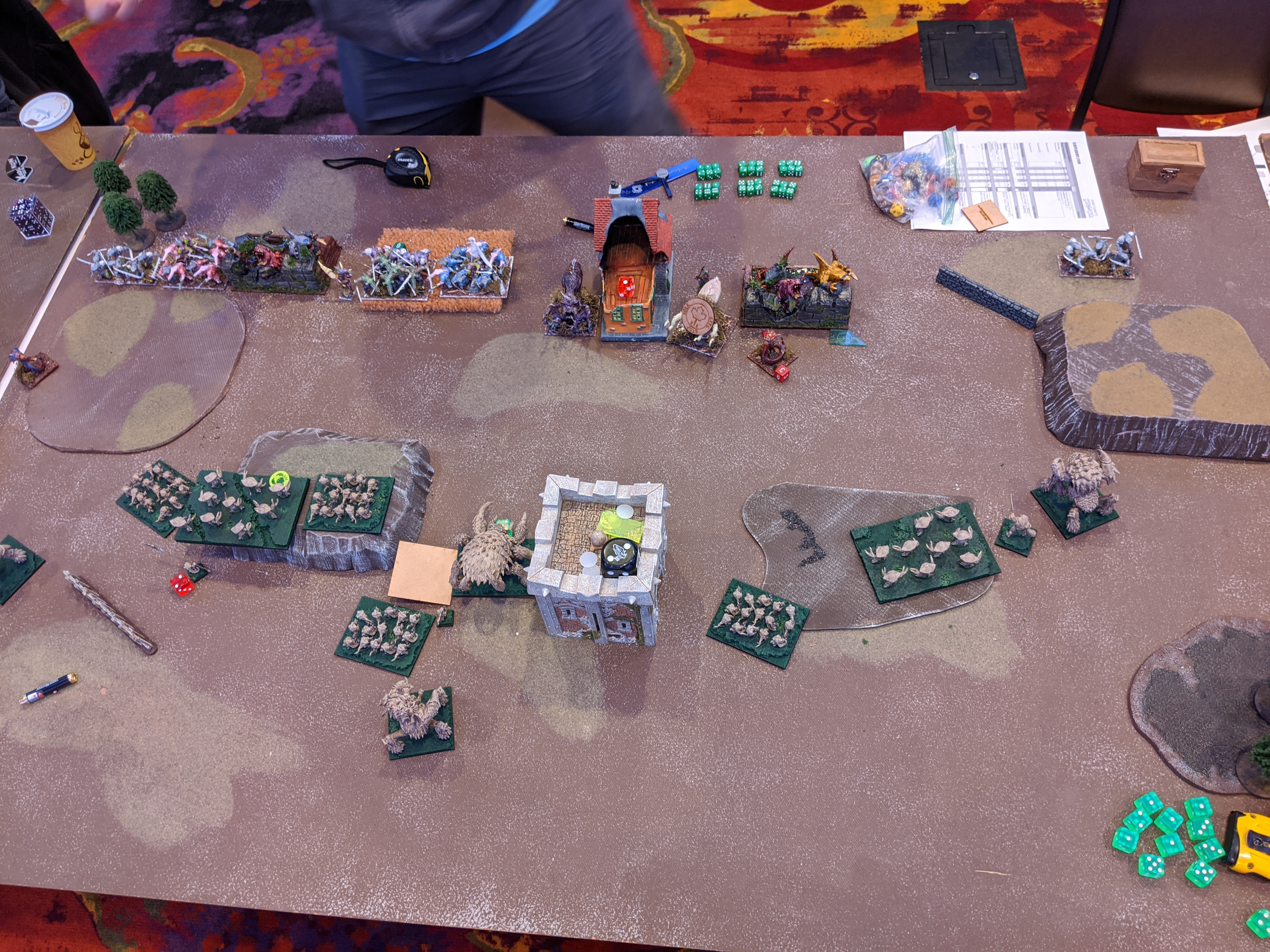 Scuttlin’ Turn 2. We do what we can to prepare for the Knuckers, but I know he’s going to do screwy things I won’t see coming. Envoy takes 2 damage from bastioning the left Gigas, and Heartpiercers stick 6 damage into a River reg and 3 onto the right Knucker.

Knuckers, engage! Left Gigas are flanked by a Knucker (for 7 damage), while the other noms 3 damage off of the right Hearpiercers, wavering them (!) The Riverguard Sentinel leaps on a central Heartpiercer reg, disordering it with 2 damage, and otherwise the shark line continues to play it cagey, save for the wounded regiment that jams the center alongside a bastioned Kraken.

Scuttlin’ Turn 3, and I should note that at this point we are both melting our clocks down with tight positioning and option weighing. Regardless, I eventually keep pressing the right (the Eternal is facing the River troop and where they might hop to), punch down in the center (to the tune of dead Riverguard reg and gently caressed Krakens, the white one having copped a Hearpiercer harpoon), and bait the left with Heartpiercers (who also shoot and waver the leftmost River troop). The Gigas ultimately did not counter their flanking Knucker, preferring to backup out of the Dambuster’s charge and just accept another round of being flanked. With their massive base, turning to face would have invited a whole lot of toady attention.

Also the Heartpiercers fighting the Sentinel began wrecking him, as is their want. 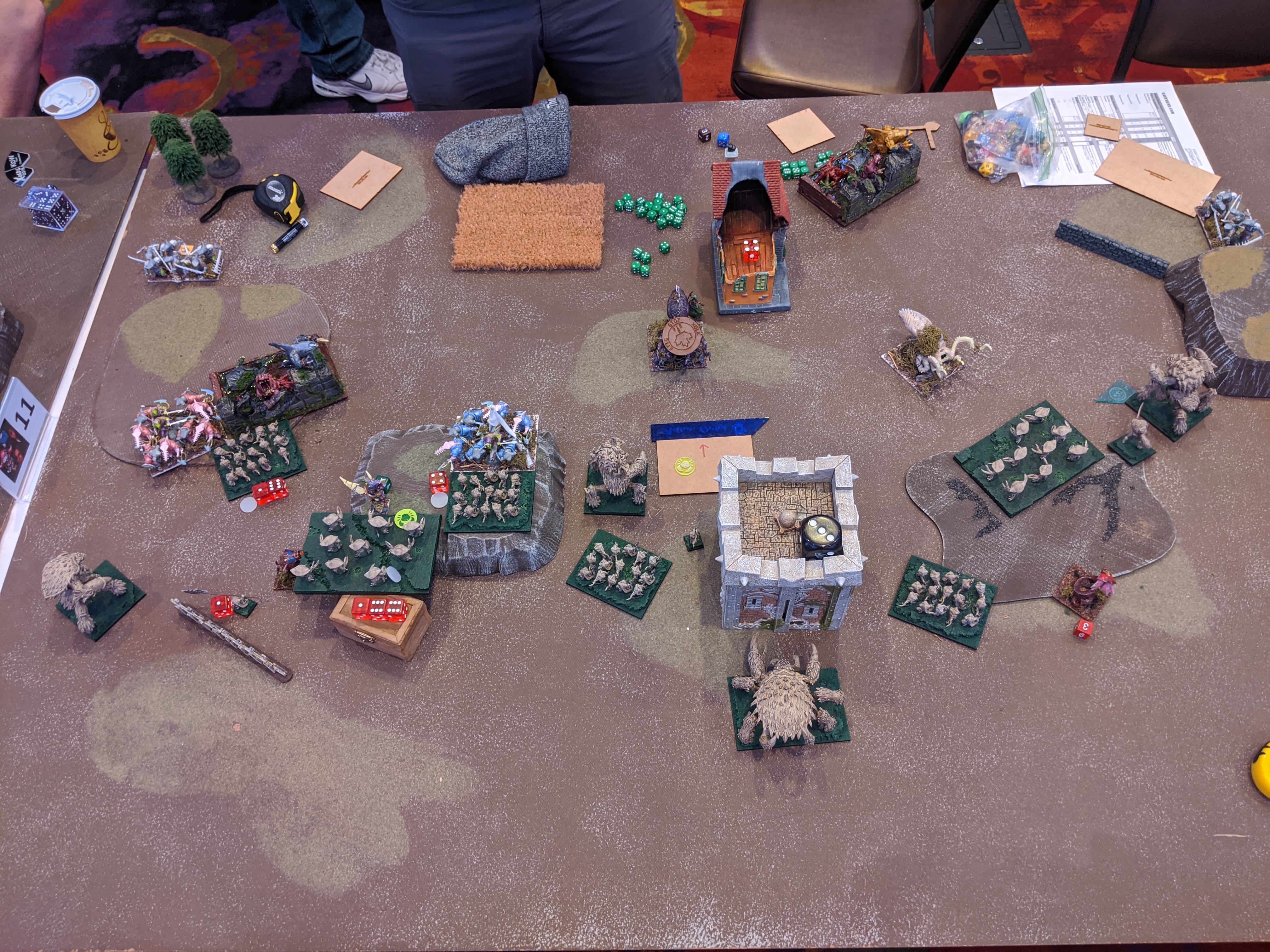 Sharks pounce on the left but wow do they meet with some tough luck. Riverguard reg and Dambuster horde leap on the Heartpiercers in the woods, but 7 damage later they’re only wavered. The Sentinel swaps to the Gigas to help out the Knucker, however it’s another waver despite 13 damage – and these crabs conveniently have fury! More Riverguard jump into the central Heartpiercers, wavering them as well on 4 damage.

In the center, the Kraken actually disengages from the Water Elementals, as the other one goes to pressure the right flank. The Awesome Dambuster horde continues to back away from my right Kraken. 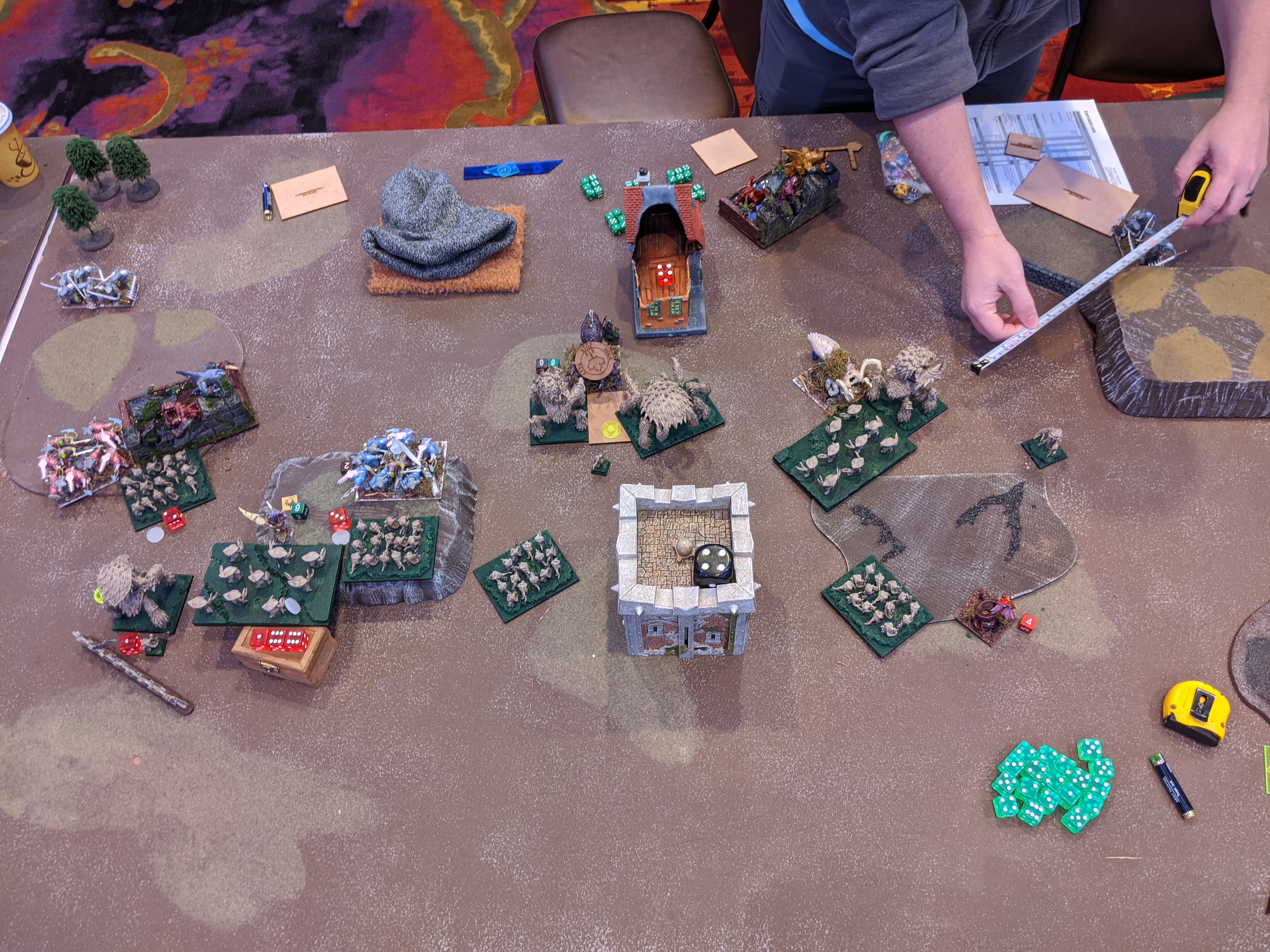 Scuttlin’ Turn 4. With less than 30 minutes left in the round, I tell him I’ve really enjoyed the match but have to play a little dumber now – basically I decide to throw the game away on a couple poor risks instead of waiting for us to clock out in a draw or minor win to him.

Anyway, time to go aggro! Kraken on the left rears and kills the Knucker in the Gigas’ flank, while they counter and waver the Sentinel. Friendly Heartpiercers shoot the sharks messing with their wavered buddies on the hill, for 2 damage. Kraken in the center combo-charges the bastioned enemy Kraken with the Water Elementals, and while they do a solid 12 damage, a double 8 rout test is too much. Finally, the right Kraken and Gigas go into the other enemy Kraken, doing a couple dice of damage but evidently failing to even waver it. In related news, the Heartpiercers on the right wound the remaining Knucker but narrowly miss even wavering it. 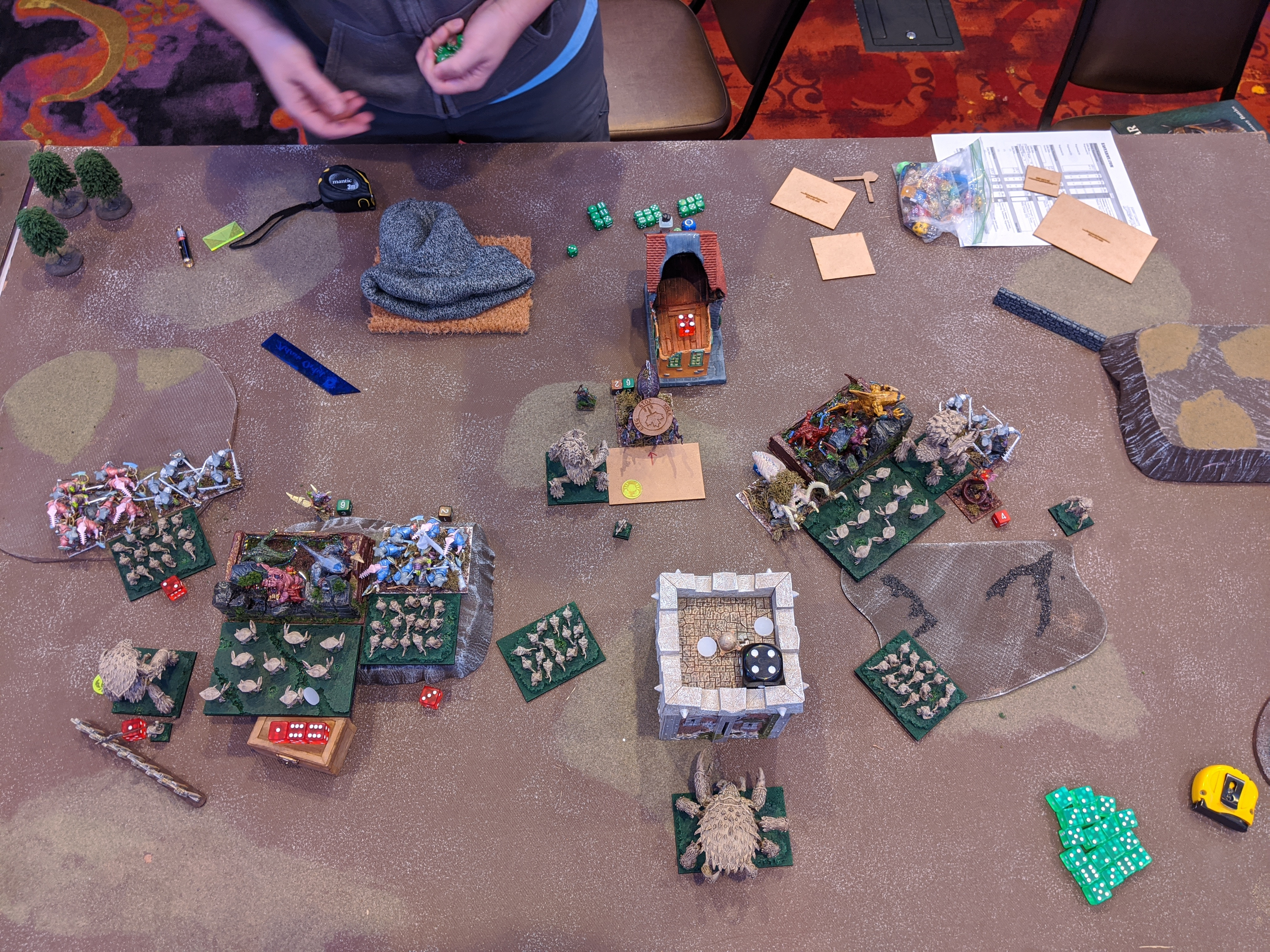 Jumping sharks everywhere! On the left, the Heartpiercers in the forest are charged by a River reg + River troop, the Gigas by the (Me 4+) Dambusters, and hill Heartpiercers by the other River reg. In the center, the Water Elementals are countered by the purple Kraken. On the right, the Gigas take white Kraken and Awesome Dambusters in the front, and the Kraken receives River troop in the flank and Knucker in the rear. 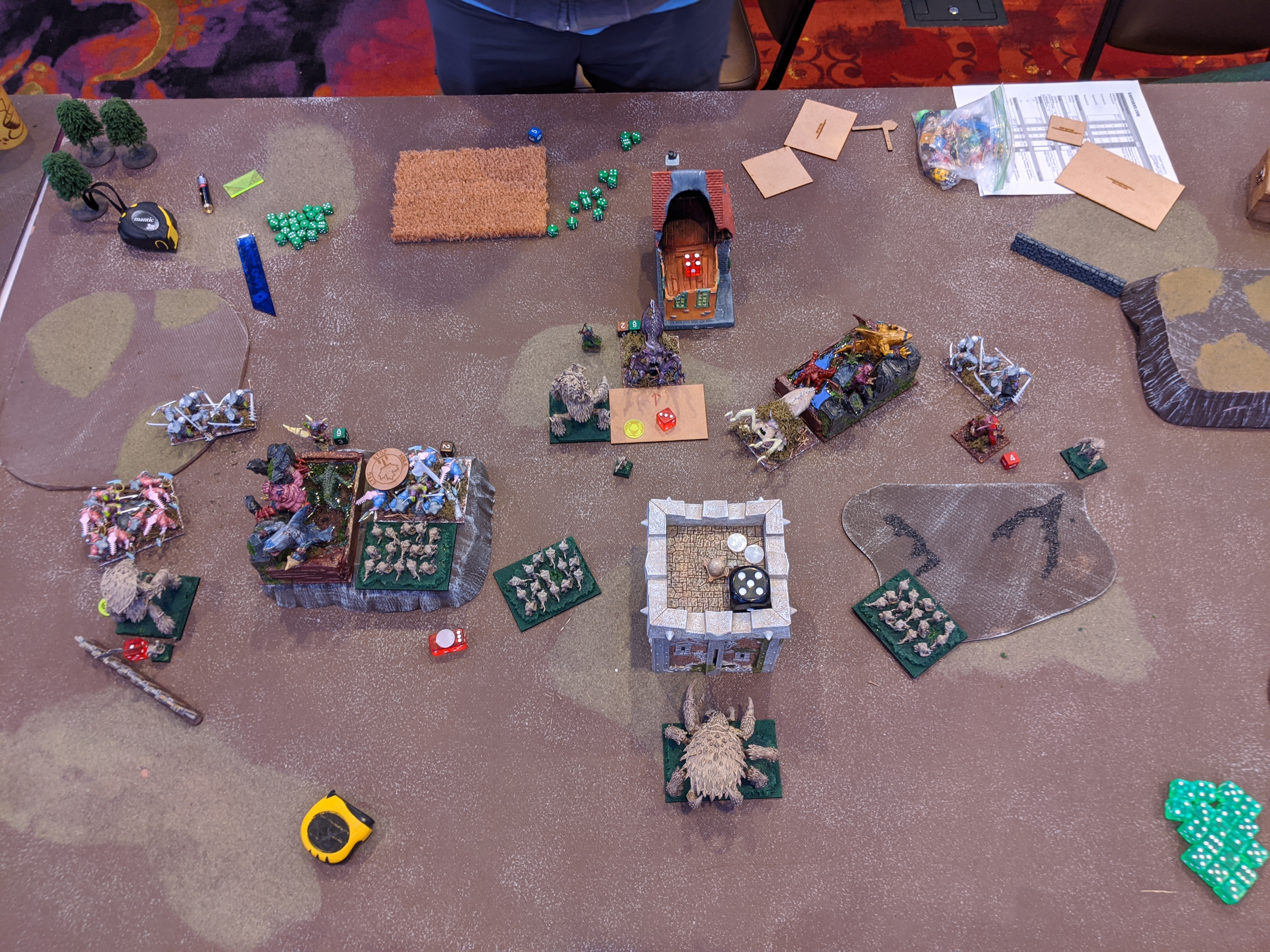 It’s, uh, super effective. All targets die, except for the Water Elementals and the hill Heartpiercers, who are wavered again. 830 point swing! Also: Kraken Count [4]

Scuttlin’ Turn 5, with minutes on the clock (this pic is from the first seconds of Sharktopus Turn 5, when the white Kraken went ham). I floor it for the scenario, sending the Eternal hard into the back right corner; the central Kraken charges, devours and overruns his Envoy; and the left Kraken backs up onto the fence to keep all them flying sharks in his front arc. Some Heartpiercers flank the Riverguard on the hill but can’t work any magic despite 5 damage total. The right Heartpiercers try to blast off the River troop but 2 damage isn’t enough. Finally, Water Elementals in the center slap that purple Kraken back to 10 damage but no lucky 9 pop. 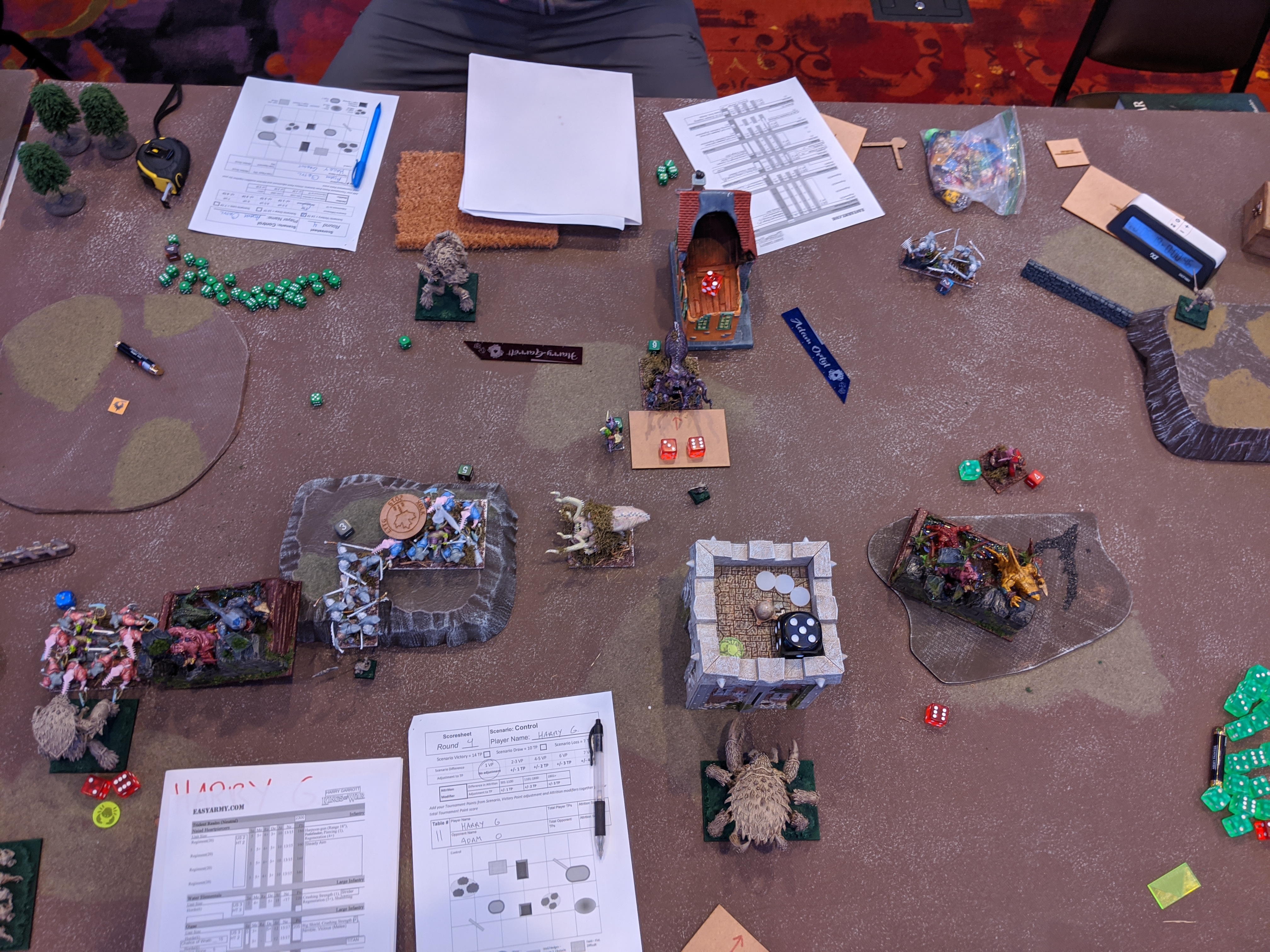 Scuttlin’ Turn 6 (seen here), I use my last seconds to juke the central Kraken into an uncontested zone and then swing into the central Kraken and Riverguard reg down in the lower left. No lucky routs in either case, ensnare sucks, but that was just for attrition, he’s got this 5:3 or maybe 4:3 depending on where that Knucker is at.

A really enjoyable, cagey game that I don’t feel too bad about going ham on. Adam was a very gracious opponent with a very cool list, and I’m inspired to do something sorta similar, with multiple combat units, including punchy troops, and really try to work some careful positioning. Also first time I’ve clocked out O_O

Up Next: Empire of Dust