Mid-tables, baby! After bouncing off the bottom table, I faced off against a new player to the game and his Imperial Dwarfs. A note about this game, I helped him out quite a bit, pointing out for example how corkscrew charges work and when he’d set himself up for some, letting him back that out and in general learn while we wrassled instead of just taking his breaks. This isn’t a humble brag thing, more a comment on how ‘this is a tournament, play as hard as possible’ isn’t particularly interesting to me, nor I think to the KOW community at large. High five, us.

Round 3 was Smoke & Mirrors, which we muddled through almost correctly. Dwarfs took first turn this time. 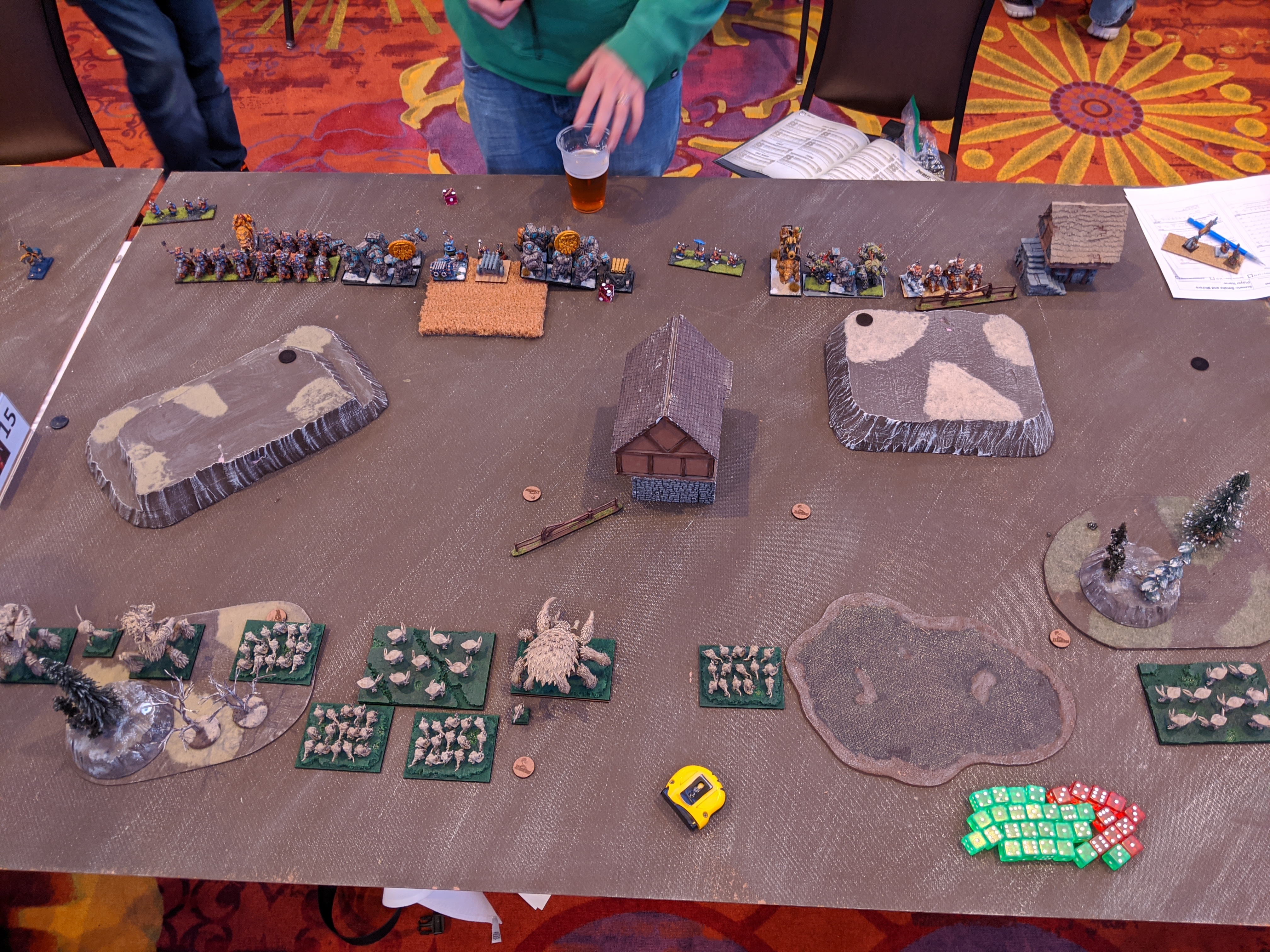 Battlelines! There’s a third Kraken hard on the right flank. 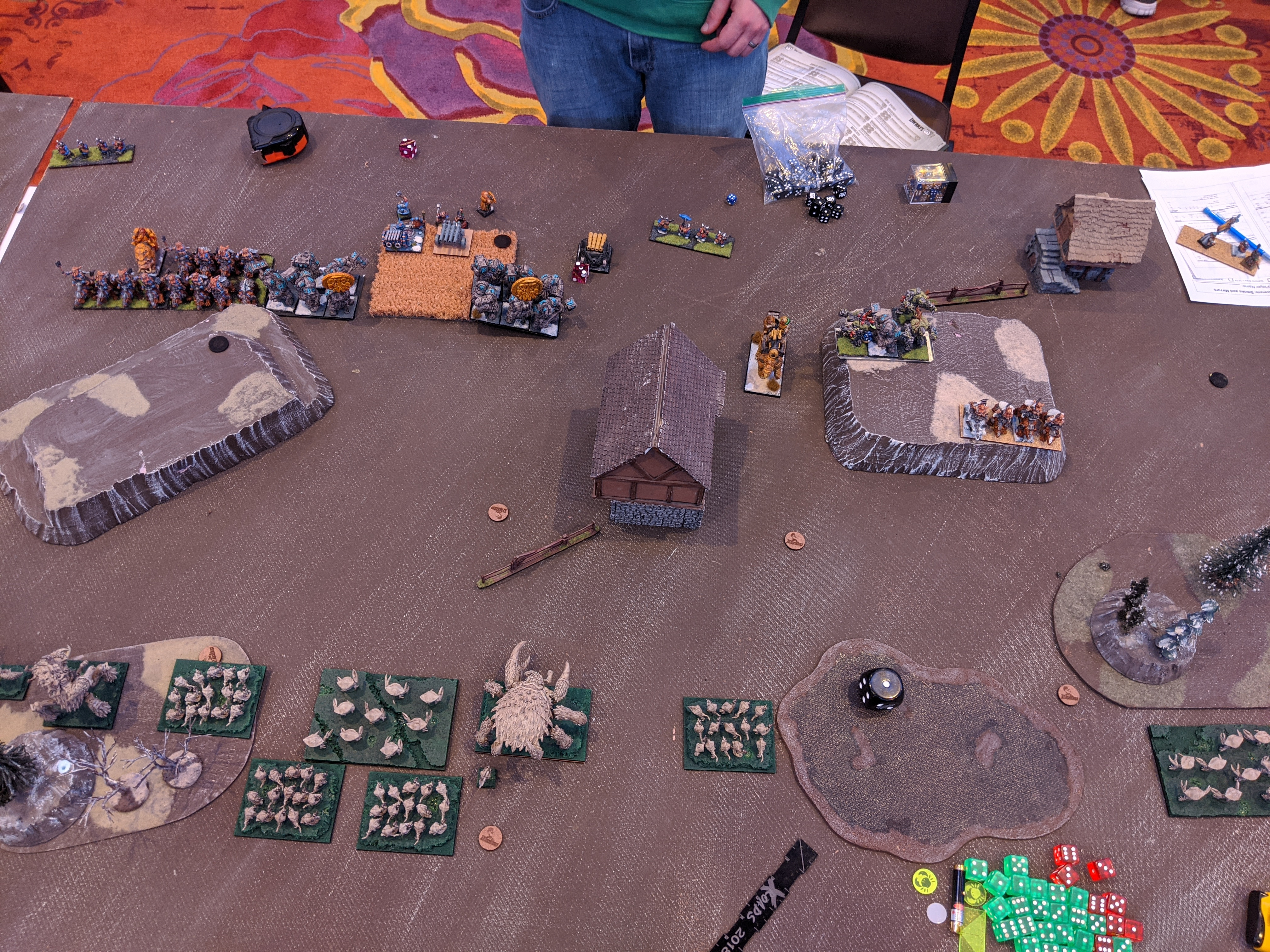 Dwarfs roll out! Except for Sharpshooters, who tag a wound on the leftmost Kraken. 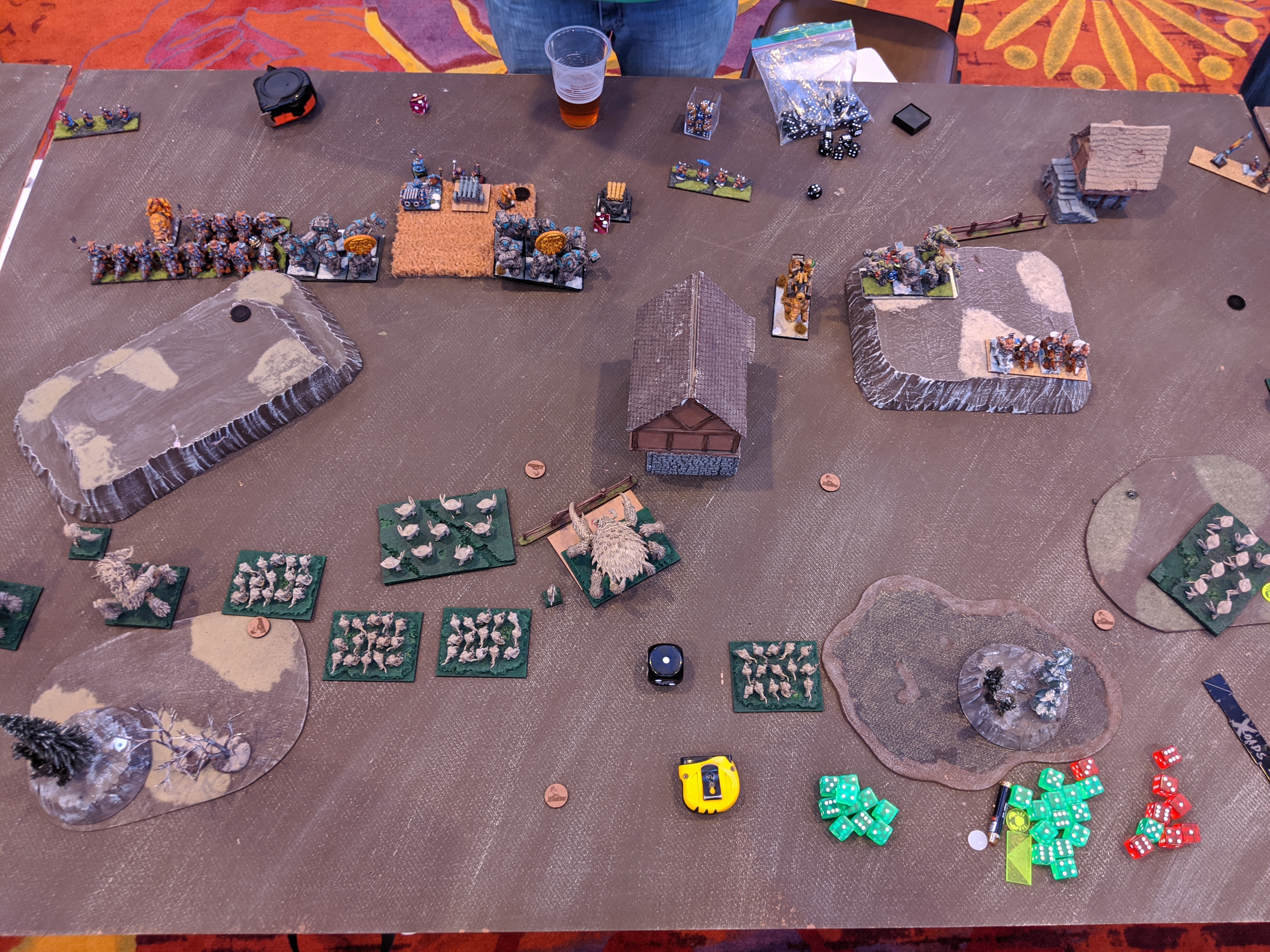 Crabs roll out! Between range, cover or marching, Heartpiercers don’t get anything done. That right Kraken slams 14” up the table edge, intent to murder those Sharpshooters. 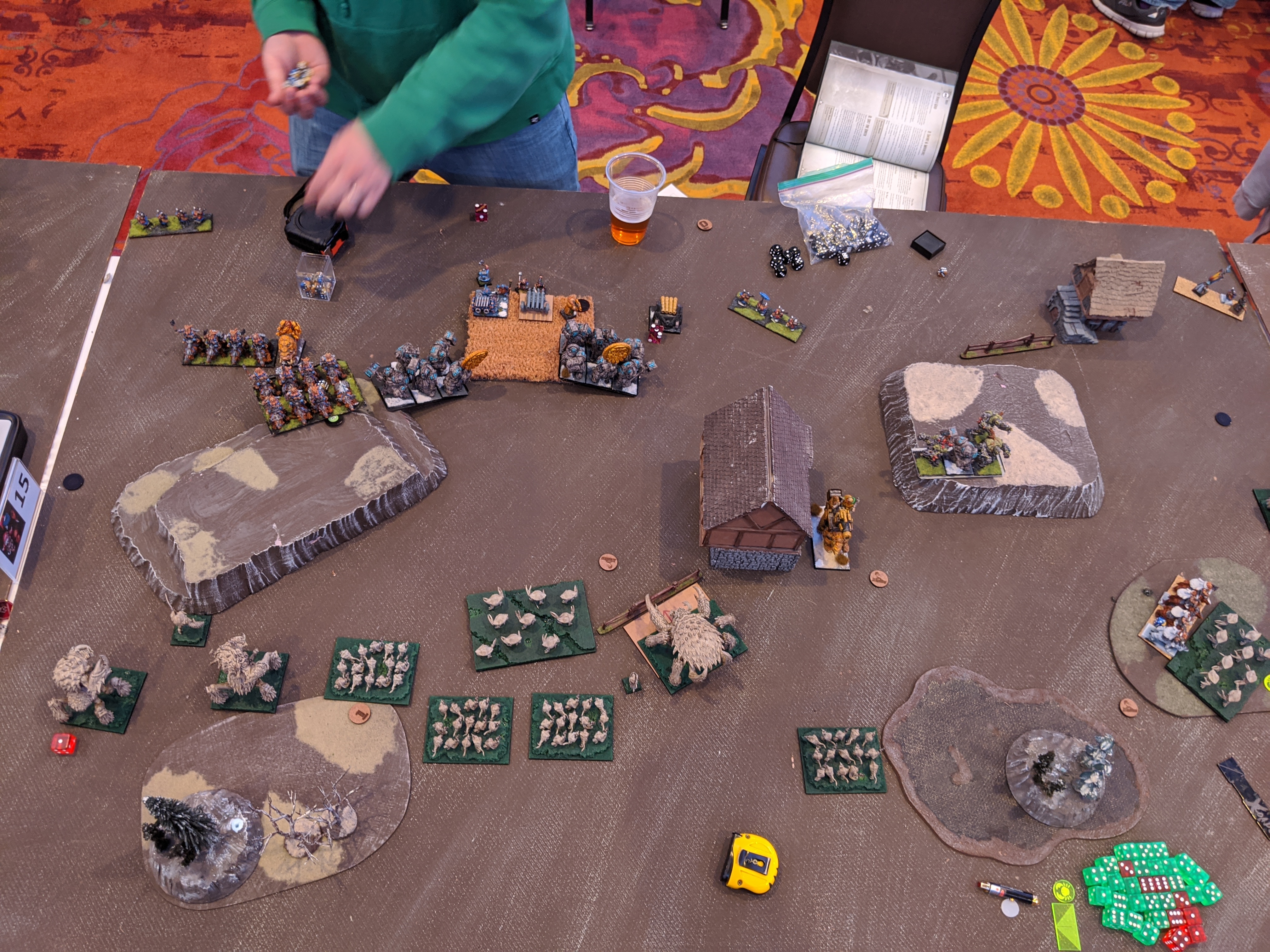 Dwarfs Turn 2, more plodding forward and setting up some traps, tho the right Brock troop throws itself into the right Gigas, hungry for crab meats. 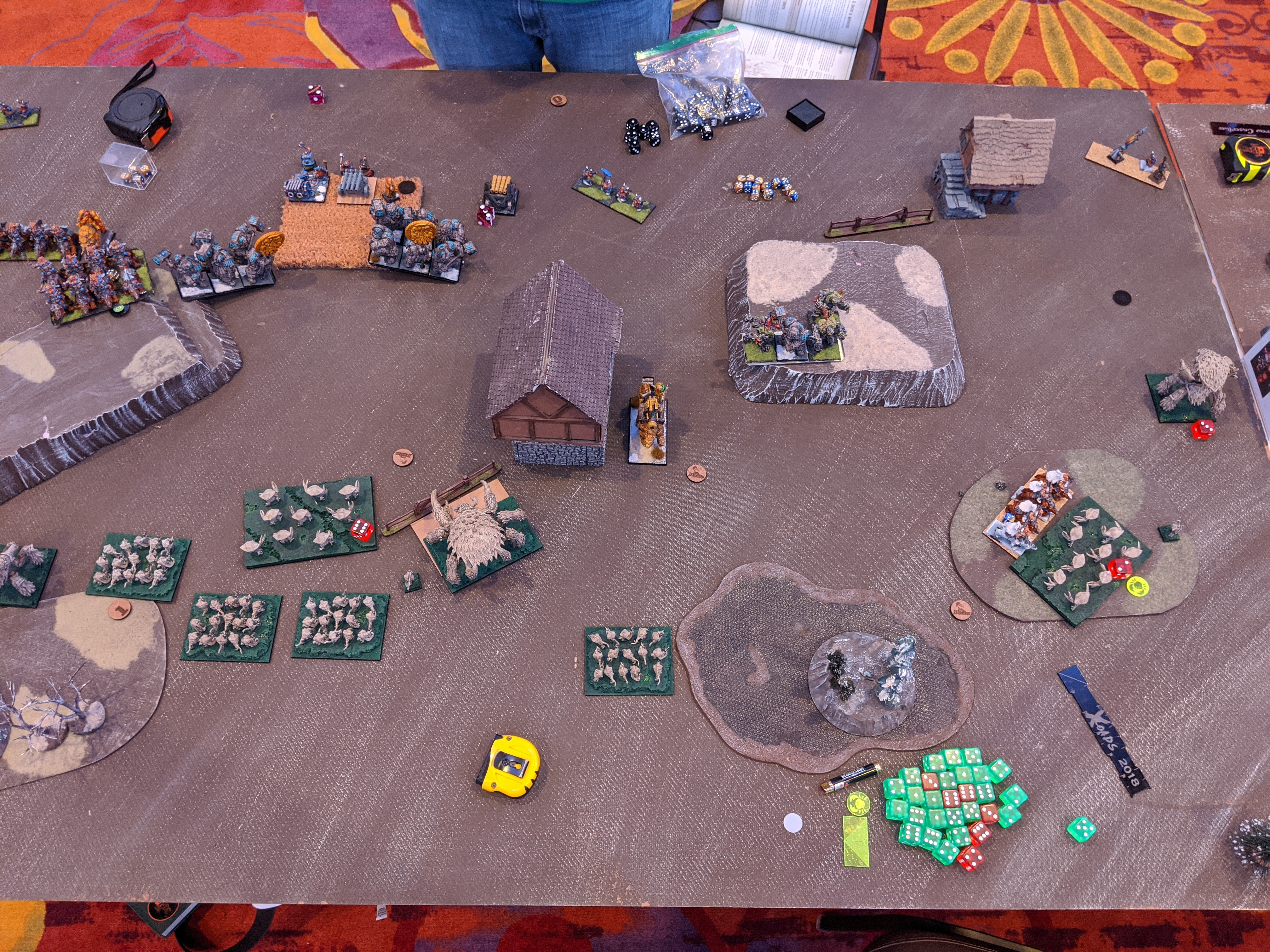 Shooting puts another 1 damage on the left Kraken, 6 on the central Gigas courtesy the Organ Guns and 3 on the right Kraken. In combat, the Brocks gnaw 2 damage onto the right Gigas but they shrug it off. 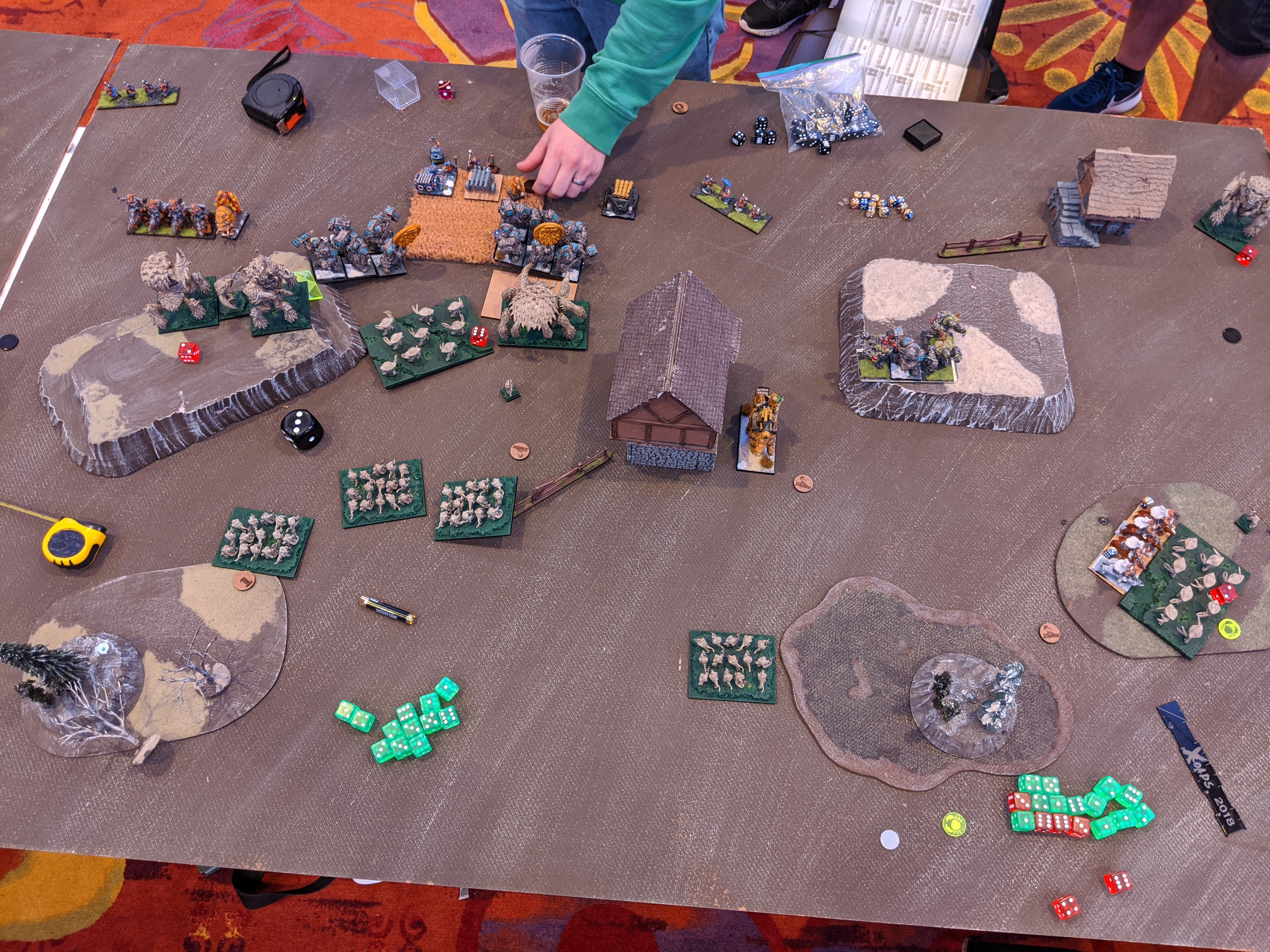 Scuttle Aggression++! Two Kraken and their Eternal escort thunder into the Brock regiment over on the left, the Water Elemental horde slams into the central Earth Elemental horde (they needed to get away from Golloch’s Fury, and I assumed they could grind a couple turns) while the wounded Gigas bodyblock for them (I used their nimble guys!), the right Kraken thunders into the right Sharpshooters, annnd the right Gigas counter-charge their Brocks. Heartpiercers chunk 10? damage (!) into the leftmost Earth Elementals, in a stunning display of 5+ / 5+ rolling.

In combat, the Brocks evaporate, with one Kraken overrunning 1-2”; the Water Elementals do very poorly against the Earth Elementals (not seeing any damage dice!); the right flank Kraken one-rounds the Sharpshooters and spins to face the action; and the right Gigas do 9? damage to their Brocks but only waver their quarry! 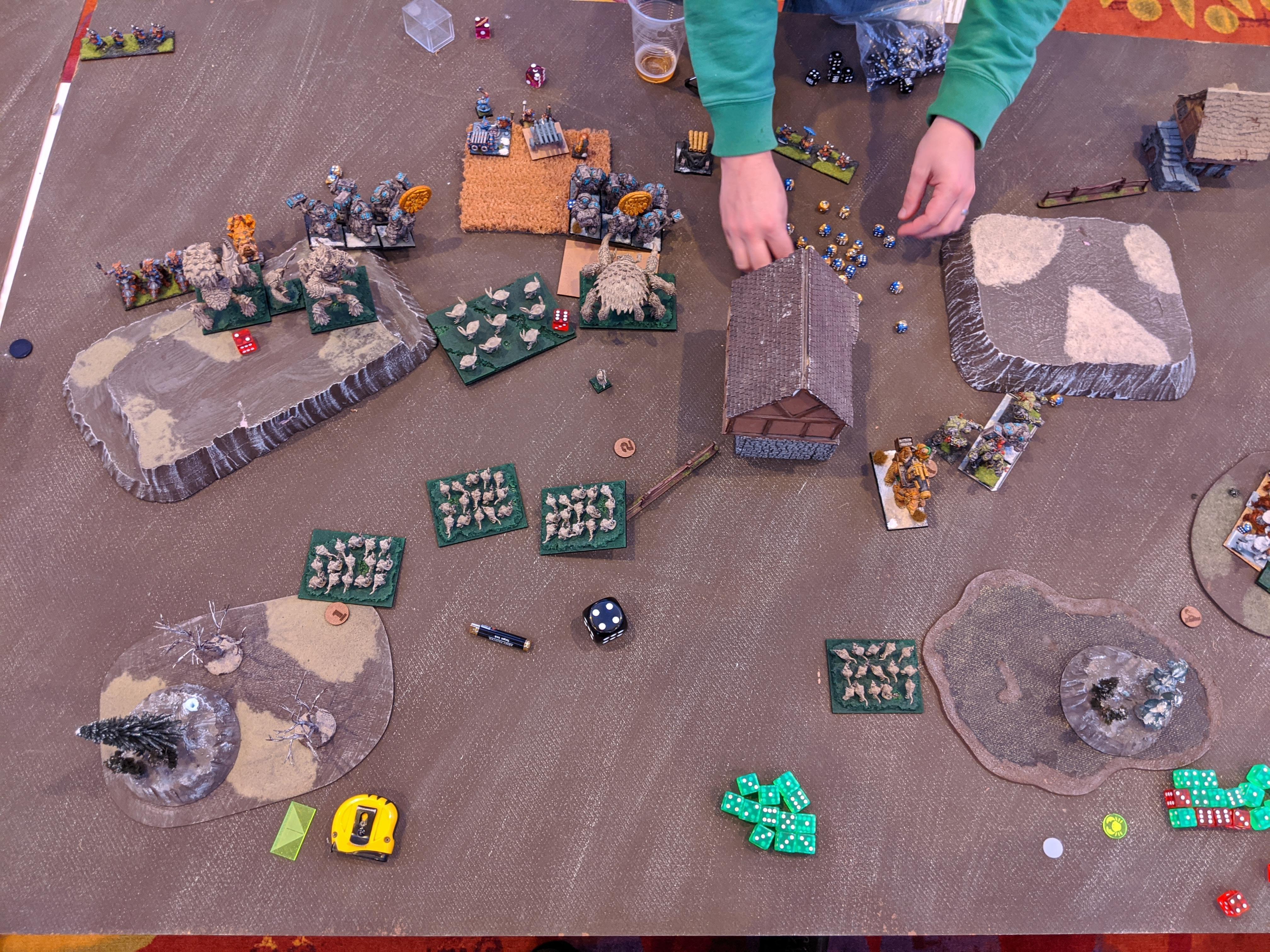 Dwarfs Turn 3 keeps the violence up. On the left, a Brock troop + Brock lord charge a Kraken, while the other Kraken over there is surge-flanked by Earth Elementals. (A brief aside: because reforming is weird, that Kraken basically had to look at the Elementals’ flank or front, knowing it would be flanked in either case. I chose to make him use his surge, because while the Kraken would die, it would keep the bane chant off of the Water Elementals. Luckily for Dwarfs they can cast BC into a surge target, ensuring the Kraken’s demise.) Speaking of Water Elementals, they get counter-charged, and the right half stuff continues forward. 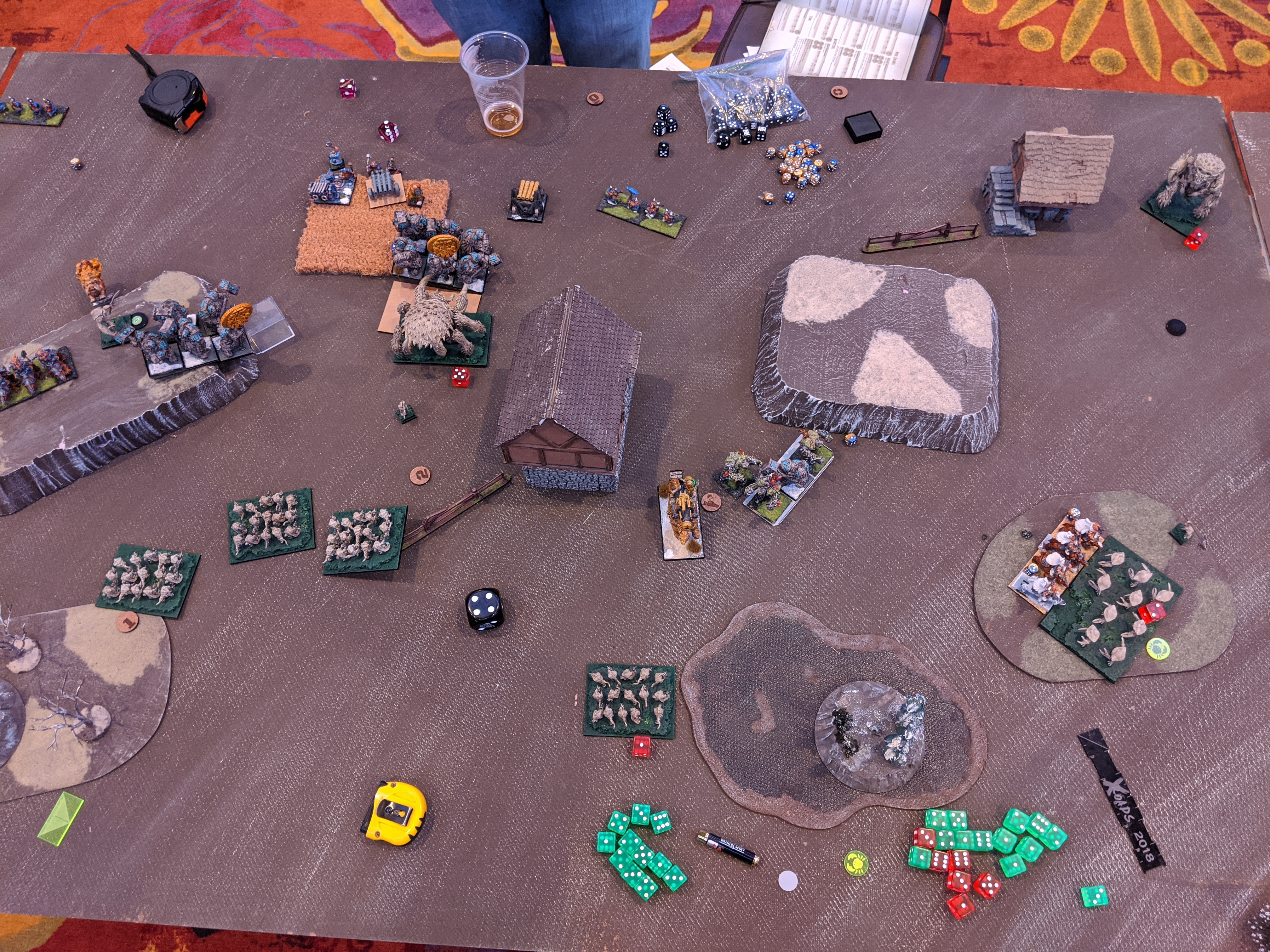 Rather unexpectedly, two Organ Guns finishes off the Gigas! Sadness! And in combat, the Brock troop + lord roll like maniacs and drop a 2 damage Kraken in one go! Less surprisingly, the other Kraken is flanked and killed by CS(2) Earth Elementals, and the Water Elementals cop 5 damage against their own elementals. 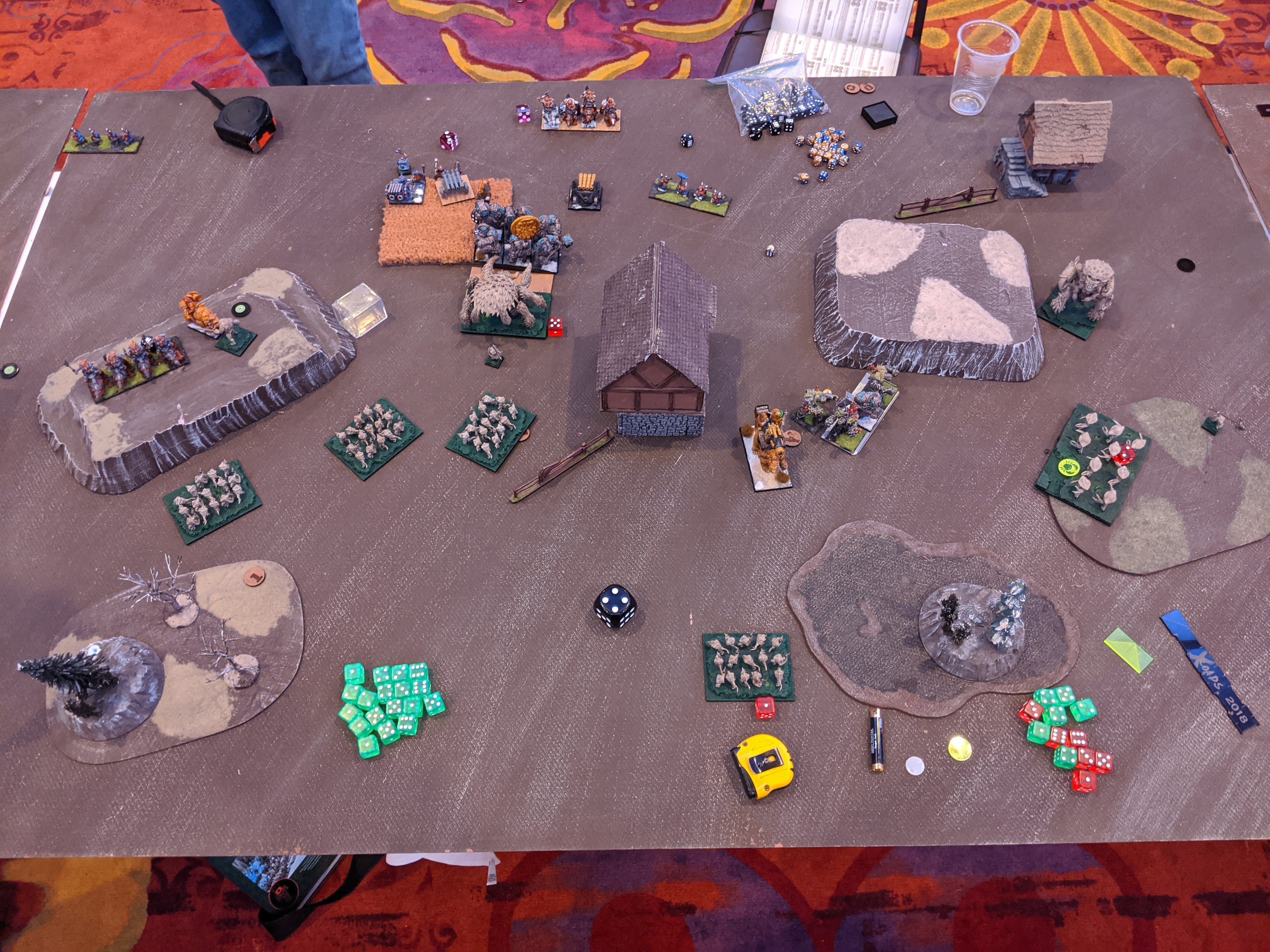 With the heavy hitters evaporating on the left, the Scuttlers have to reassess a bit and start mobilizing Heartpiercers for scenario duty. They also shoot the Brock troop for 6 damage and shoot and rout the Earth Elementals that killed the Kraken. Damn, little dudes.

Meanwhile, the Eternal charges the Brock lord (and whiffs?!), the Water Elementals regen 0 damage but carve a few into the Earth Elementals, the Gigas messily dismember their Brocks, and the surviving Kraken looms large on the right flank. 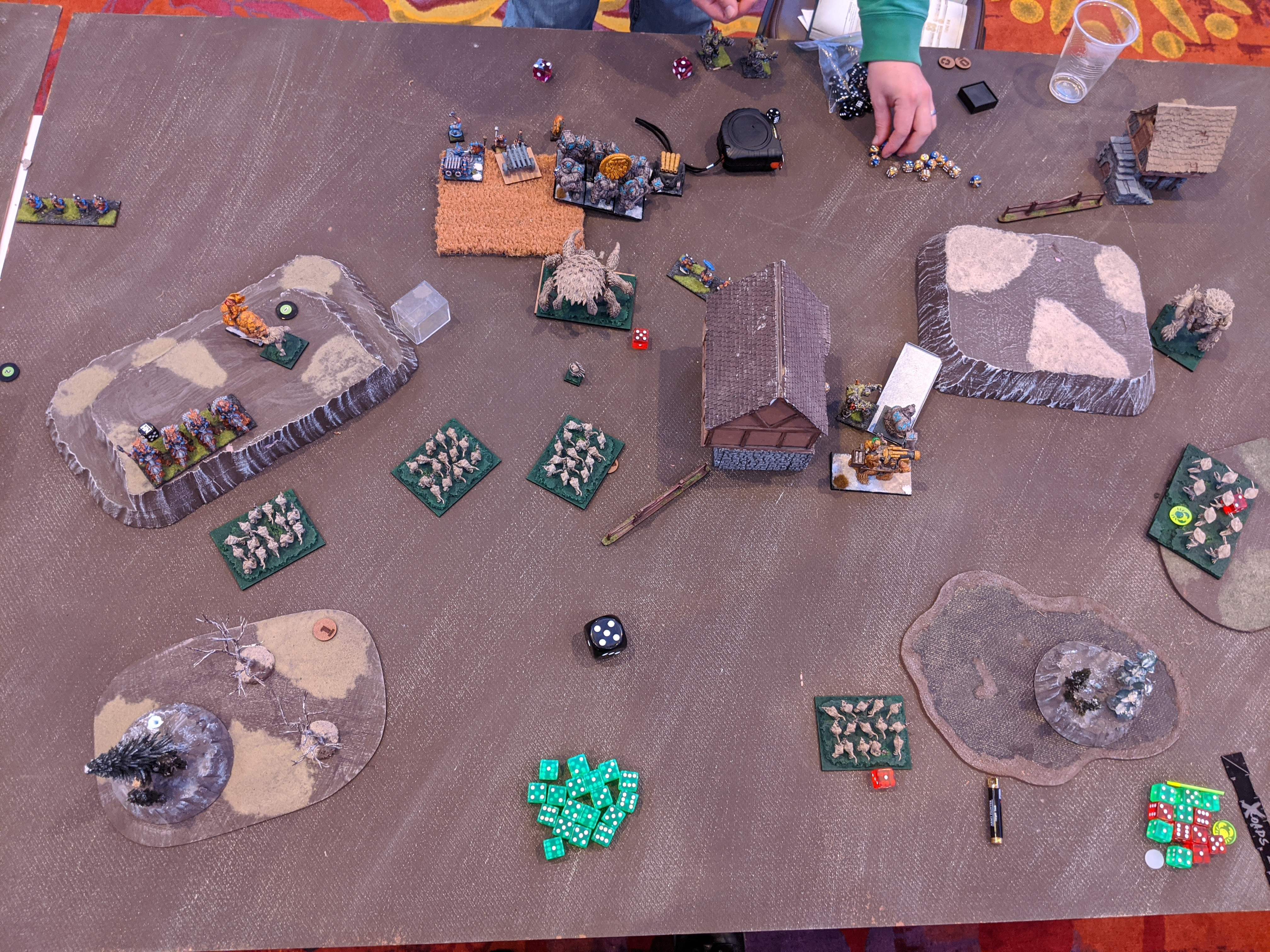 Dwarfs Turn 4, because that turn die has to be off after we used it to prop up some Brocks earlier. At this point in the game we’ve turned over all of the 0 and 2 tokens, so the objective situation is pretty clear – hence his Sharpshooters booking it for the left and central tokens, and Golloch and the right Earth Elementals consolidating around the token to the right of the house. (He’s also scared of the last Kraken …) Also the Brock troop charges some Heartpiercers (who are currently scoring the lower left token), the Brock lord counters the Eternal, and the Earth Elementals fighting the Water Elementals back off, because this dude knows what he’s doing. 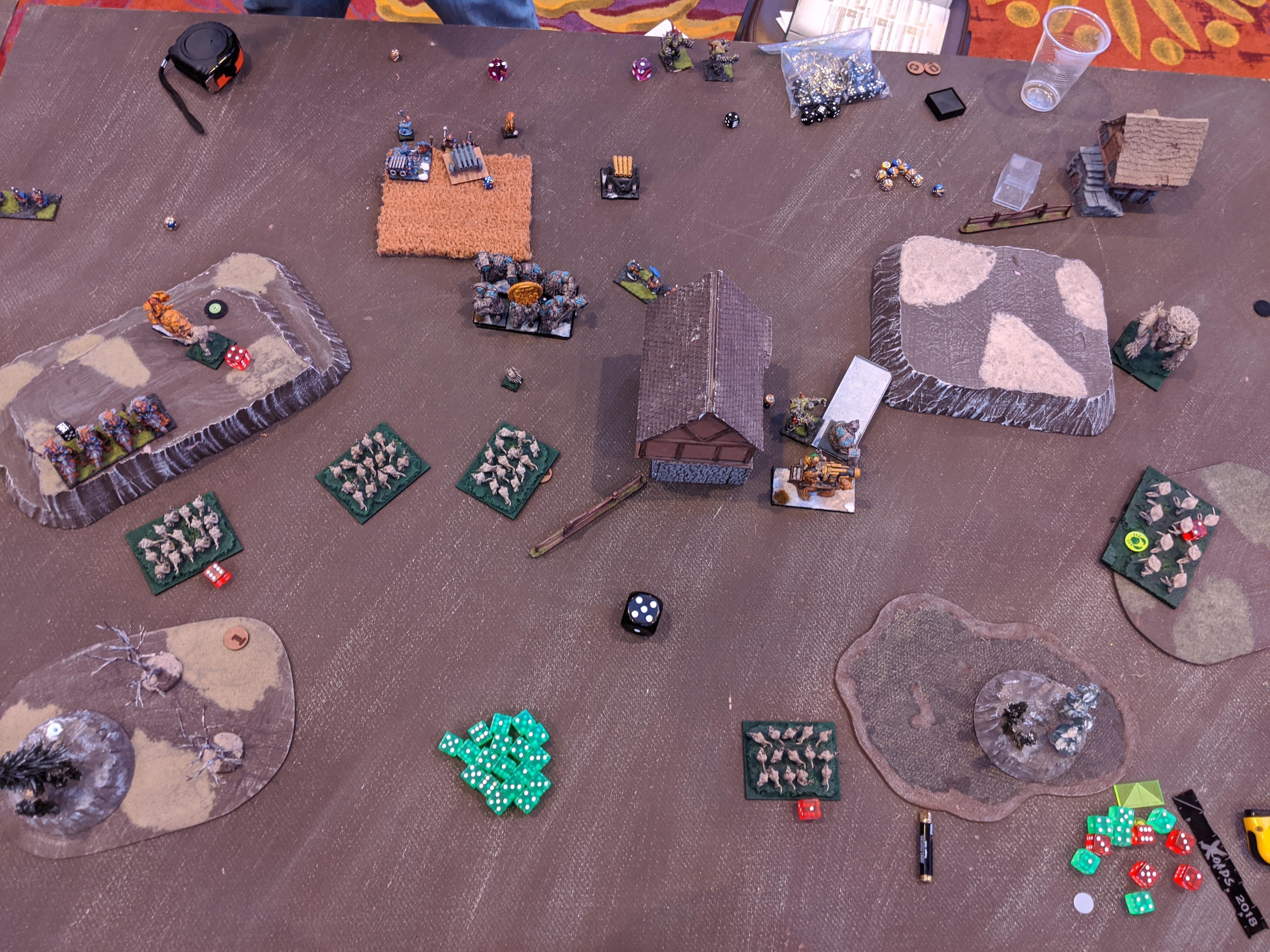 Organ Guns ventilate the Water Elementals before the Earth Elementals surge (+ bane chant) back into them and slaughter the mega crab. The Eternal takes 4 damage from the Brock lord (awesome rolling from this model all game!), and the Brock troop noms 6 damage into those Heartpiercers but don’t waver them. 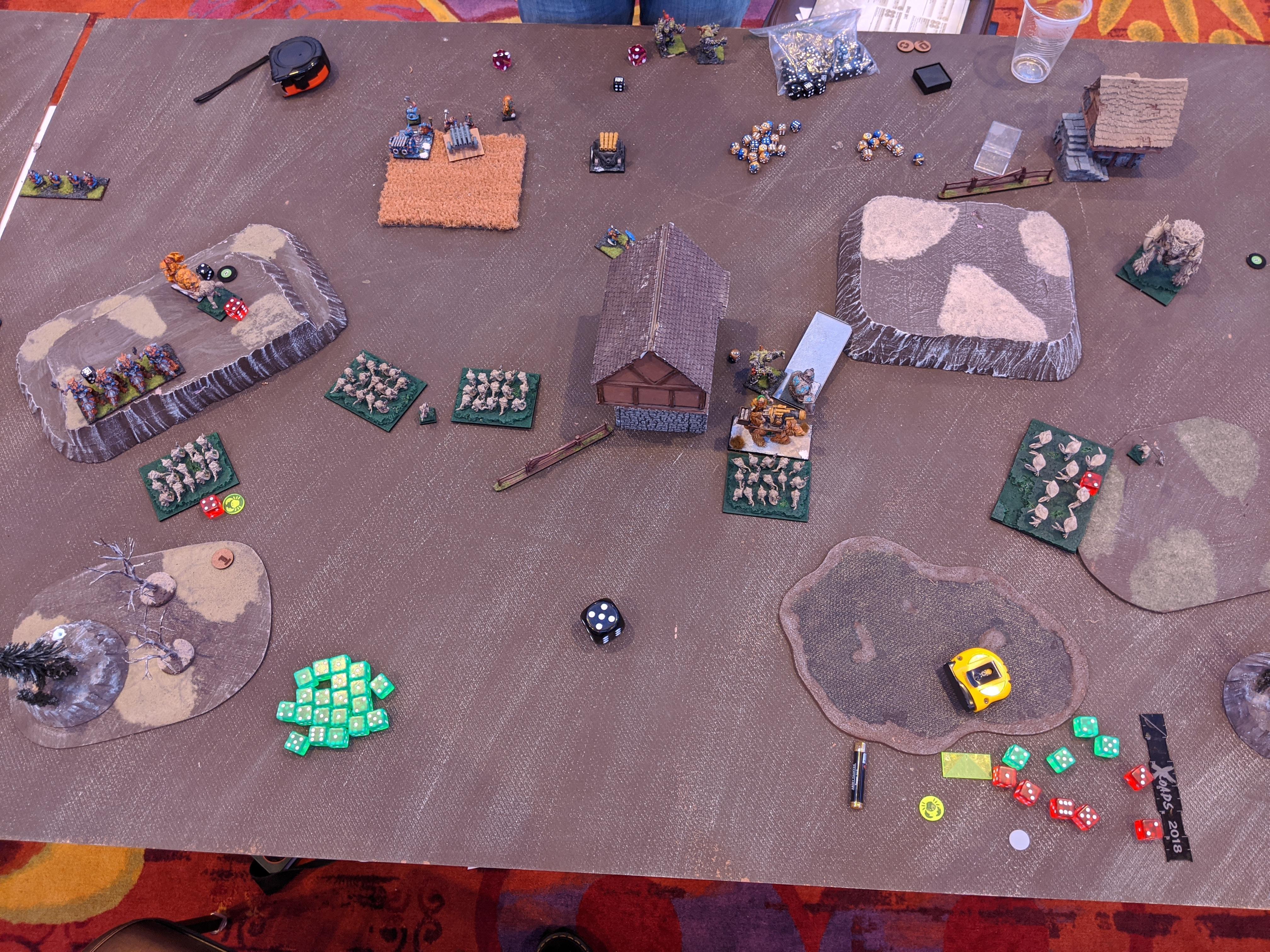 Scuttle Tactics++! Worth noting that the 2 point objectives are hard left, where his Sharpshooters are running too, and to the left of the house, where my Heartpiercers are clustering – you know, in front of 3x Organ Guns + Sharpshooters. Those Heartpiercers fighting the Brocks counter-charge, but don’t manage a single wound even with the lute’s CS(1). The central Heartpiercers must have shot somebody, but totally fail. The Eternal slaps 2 damage into the Brock lord but he cares not.

On the right, the Heartpiercers who spent the game backing away from Golloch’s Fury flank charge the big guy, failing to wound it but getting within 3” of a 1 point objective, which made him think long and hard about his options next turn, as the Gigas hove into charge range. 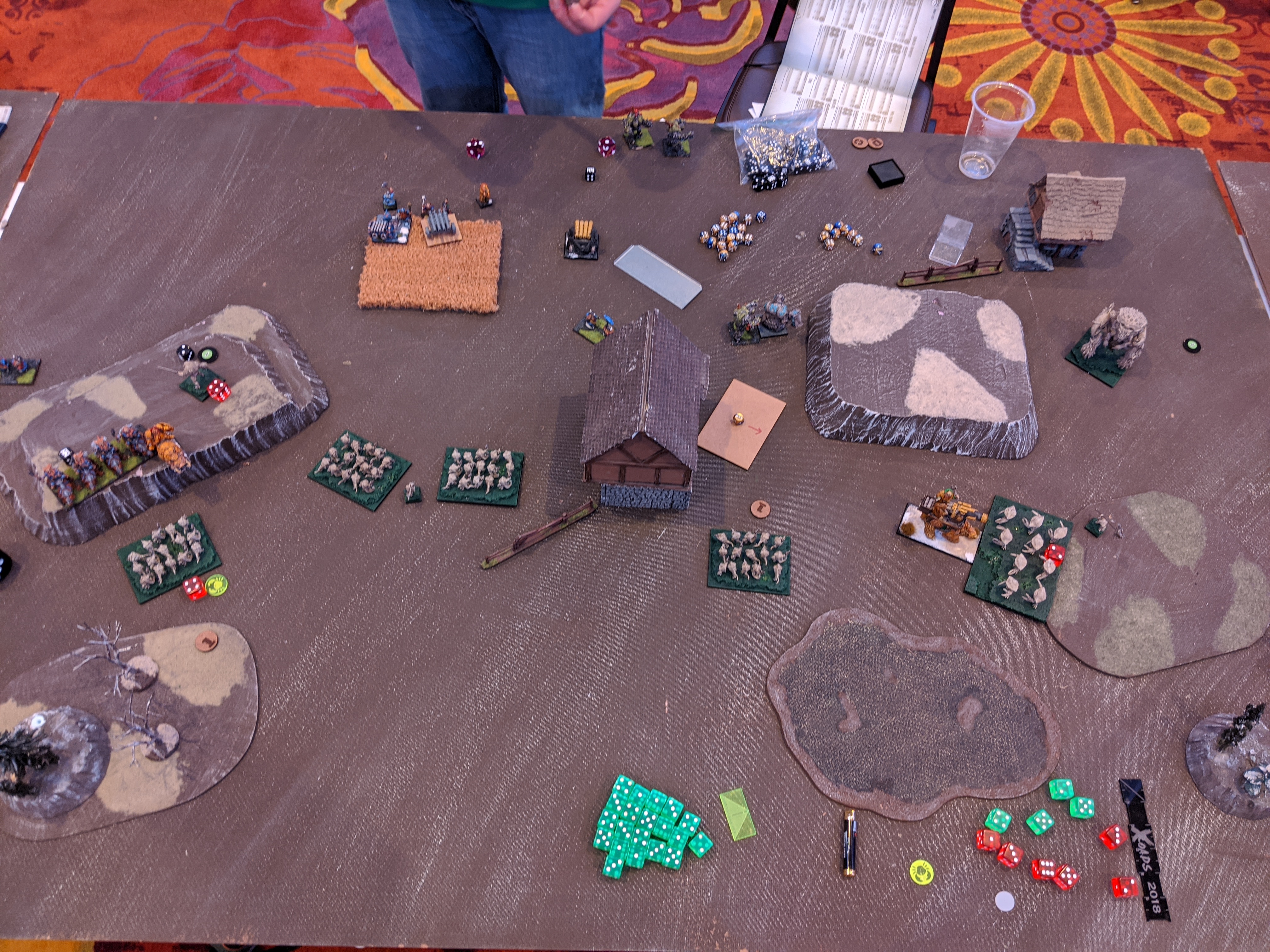 Dwarfs Turn 5, and we spend a long time talking out scenario end game (we thought it was Turn 6). Without a doubt, the Eternal has to die (otherwise he’ll flank charge those Sharpshooters, murder them and grab the other 2 pointer), and ultimately the Dwarfs trust in their guns to take him out. The Brock lord rides off to help the Brock troop drop those Hearpiercers and overrun to their 1 pointer. And Golloch’s Fury, seeing that the Earth Elementals have US 3 to the Heartpiercers’ 2, plows off into the Gigas to keep them (and their US 3) at bay. 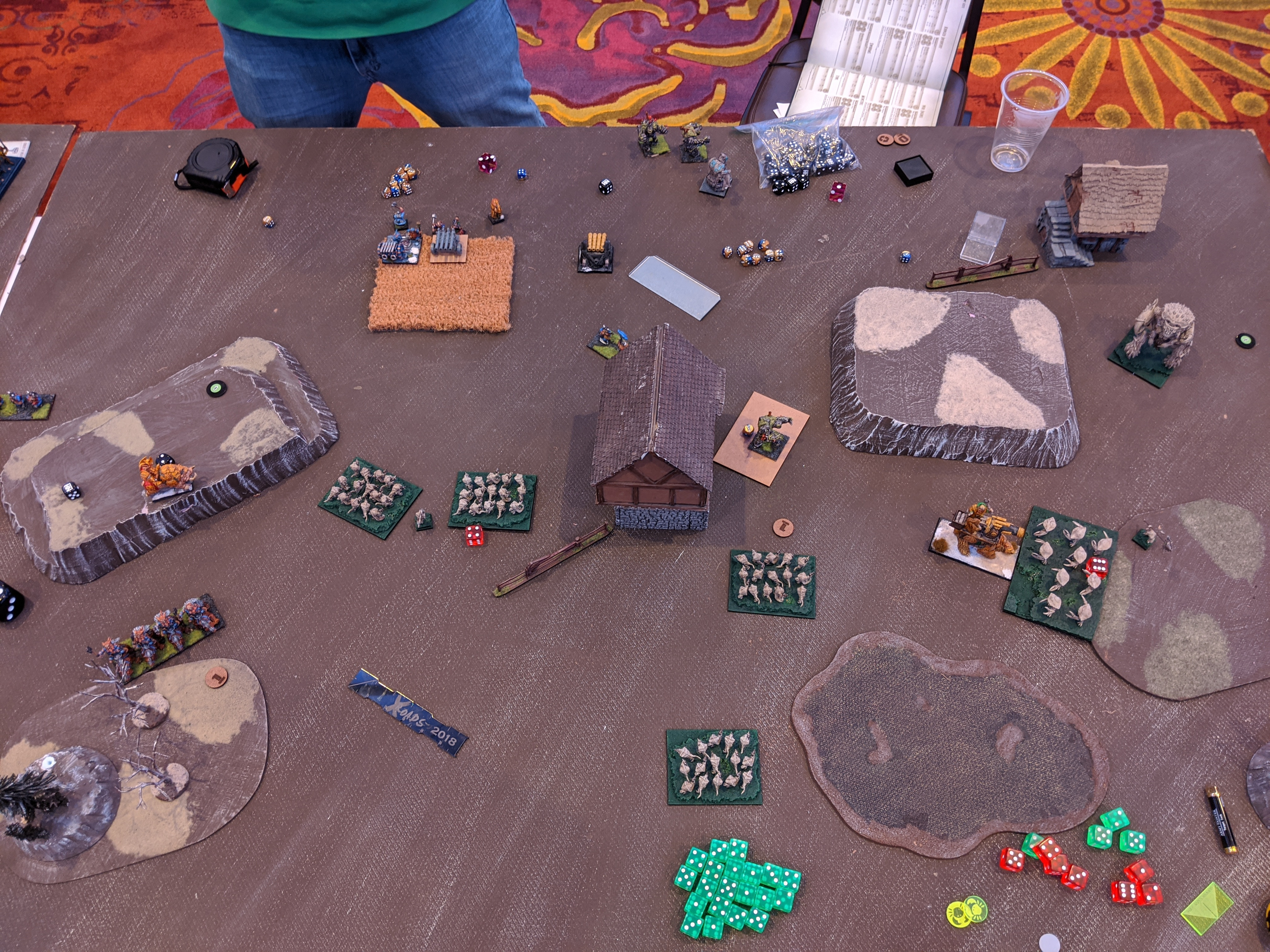 Good calls are good. The Depth Horror Eternal disappears under a double Organ Gun barrage, then the Brocks rock the Heartpiercers and overrun within range of a 1 pointer, and Golloch’s Fury boops 4 damage into the Gigas. The Heartpiercers holding my 2 pointer also took some damage from shooting. 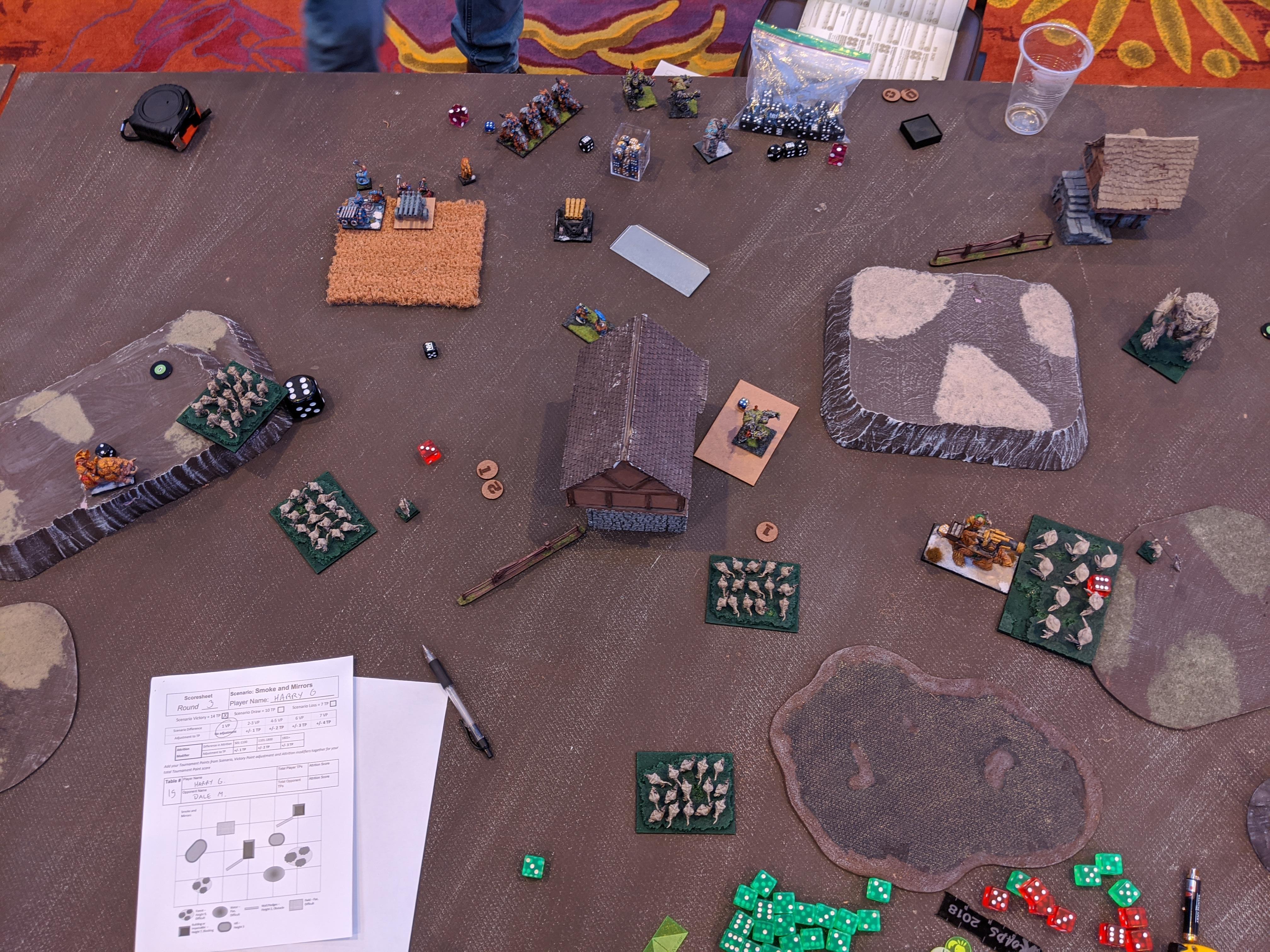 In what we thought was the last round of the game, I did a ton of figuring and balanced a lot of options, and ended up walking some Heartpiercers within range of the 1 pointer on the hill (took some shots at the leftmost Sharpshooters but to no avail), kept the central Heartpiercers within range of their 2 pointer but turned and shot the Brock troop off the table (denying 1 point), kept the surviving Kraken within 3” of his 1 pointer, and couldn’t hot dice off the Earth Elementals holding the 1 pointer to the right of the building.

We rolled but blessedly there wasn’t another turn, so we ended what we thought was Turn 6, 4:3 on objectives.

Sorry about the janky turn die on this one, I think my count here is correct and we only played five turns. That said, great game that was more involved than I thought it would be, and I lowkey love when my Heartpiercers get to decide games since I originally build the army around them. Smoke & Mirrors was … fine. I think a bit needlessly complex, compared to the old version of Pillage with the different token values, but I suppose it did lead to fairly dynamic play as we were kept weighting our options. Also I had gotten my second win! Mission accomplished!