100+ days into 2019 and I’ve only played two games of KOW: one a couple weeks ago, where my Nurglekin swarmed all over Varangur in Loot and crushed everything under hot dice, and then this Bloodfire game back in January that was nearly lost in time. I finally got the photos sorted out and, since I’m thinking of giving the fire crew one last hurrah at Orc Town GT this summer, figured I should try to muddle through the report for posterity’s sake. My Varangur scrum-mate wanted practice for Masters, but unfortunately he got to play against the red blob!

Went with the usual, since we were playing COK18 and Bloodfire also doesn’t change much either way.

Seems legit! If 10 points under, Direfangs might have had a gift or the King an item.

Looks like we played Loot? Varangur won initiative and took it. 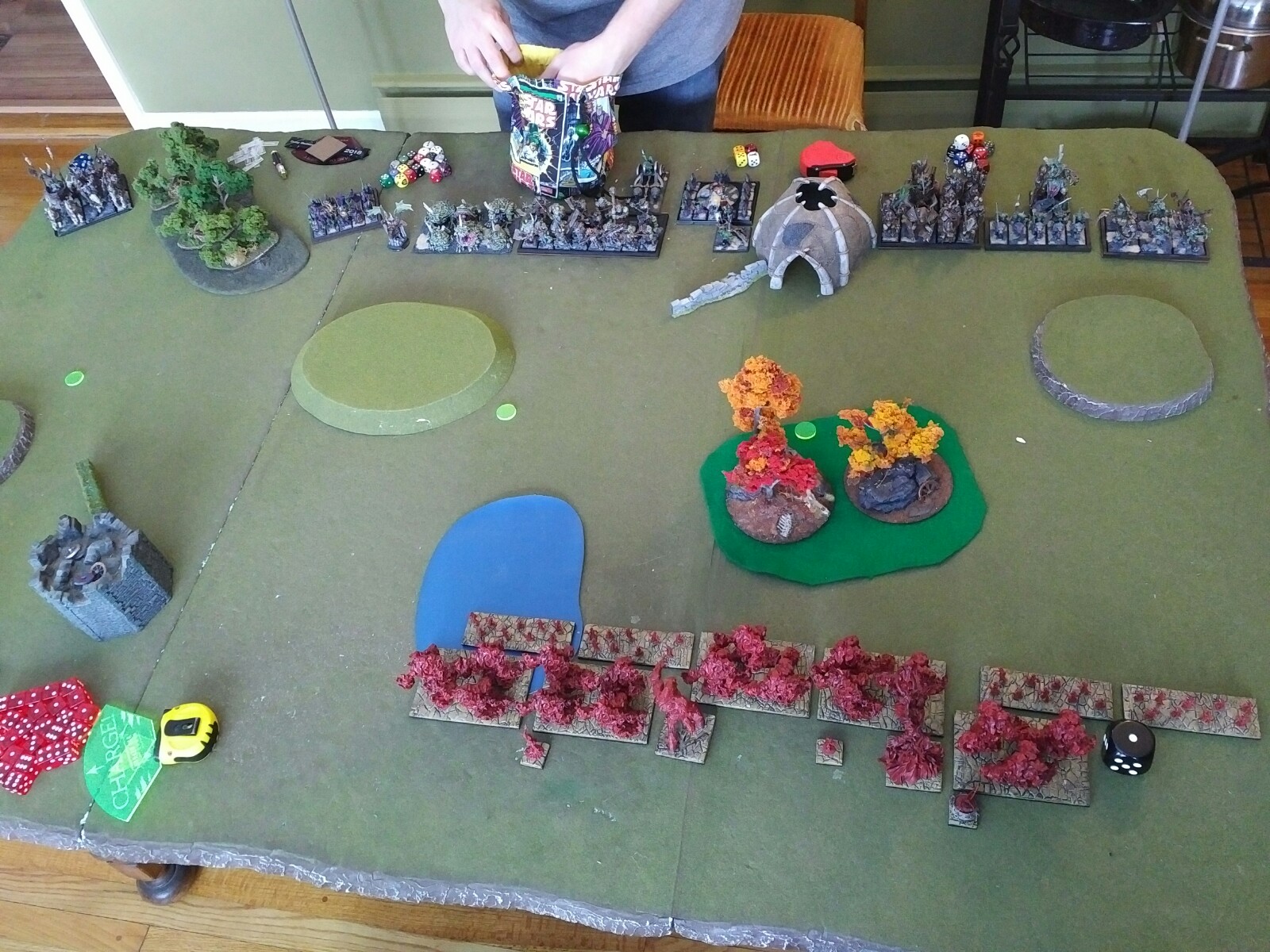 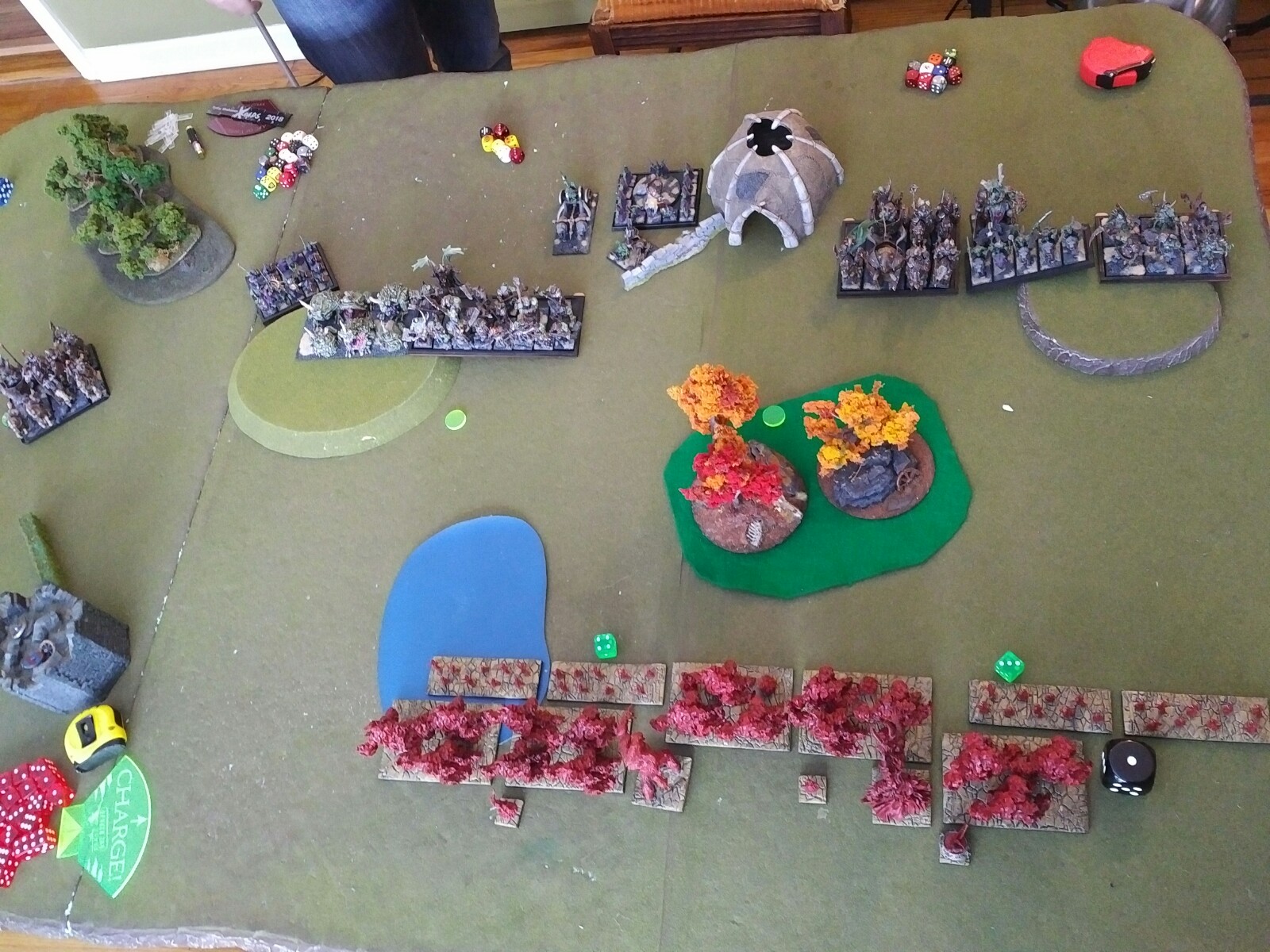 Varangur roll out, with the leftmost Mounted Sons grabbing a loot marker. Spitters and Sniffs shoot some Ember Sprites but the little things stay cool. 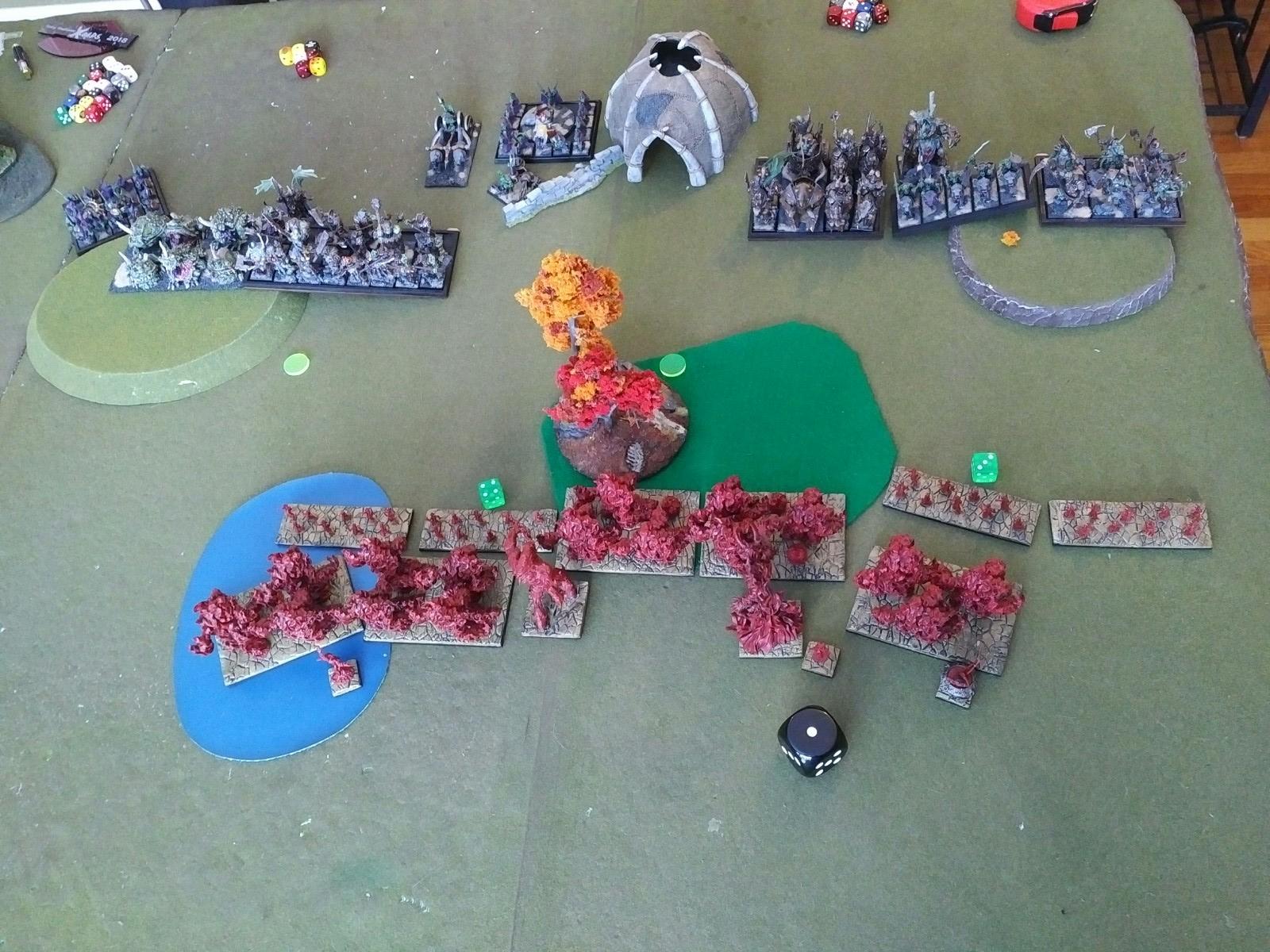 Bloodfire oozes forward, mostly into cover or chaffing range. Ember Sprites put a point of damage on the Bloodsworn horde while the Martyr-Priest cleans off the right Sprites. 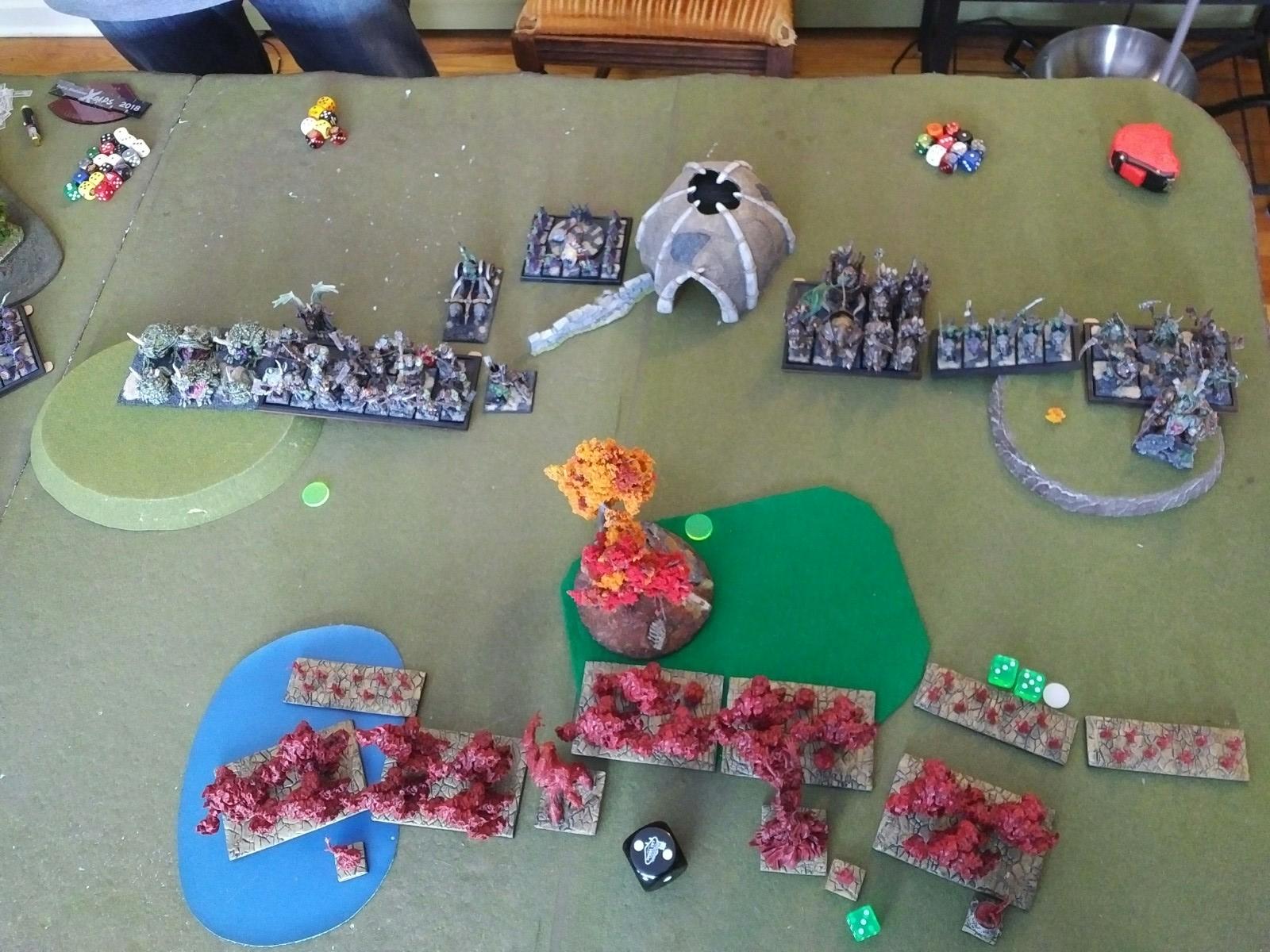 Varangur prepare to engage next turn, trying to clear some chaff in this one. The wounded Sprites are dropped by the Trombone (and I think the Goblin bows fluffed into other targets), and the King on Chimera wavers another unit with a strong breath shot, gumming up the Bloodfire right flank. 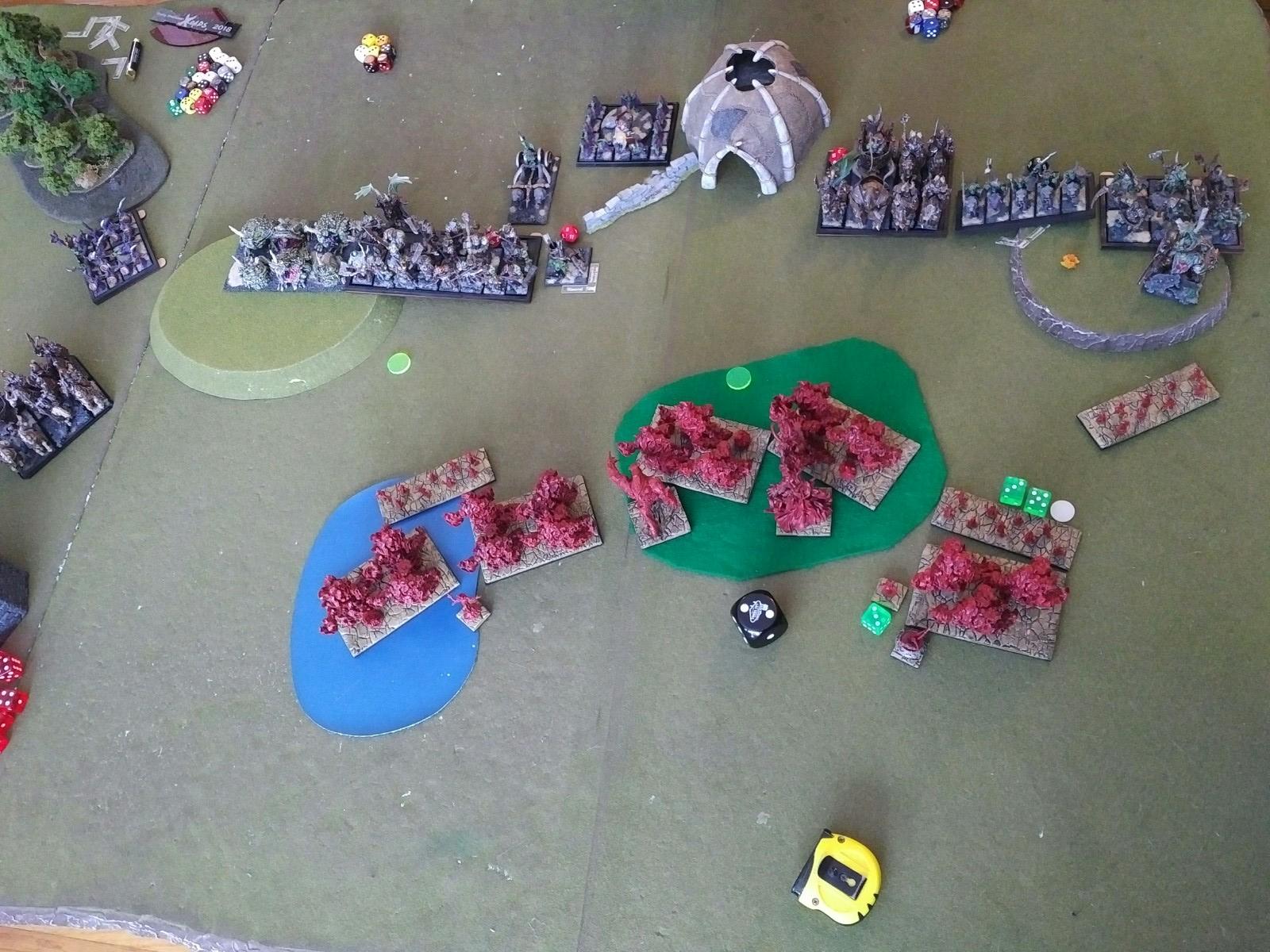 Bloodfire bows out, setting up Nv support, powering up breath weapons and anticipating next turn’s carnage. The CLOFD and leftmost Sprites hammer the Trombone, only managing a waver. The functional rightmost Sprites angle hopefully, wavering the Sniffs in the process, and Agnes rips a few points of damage into the central Mounted Sons with her heat ray. 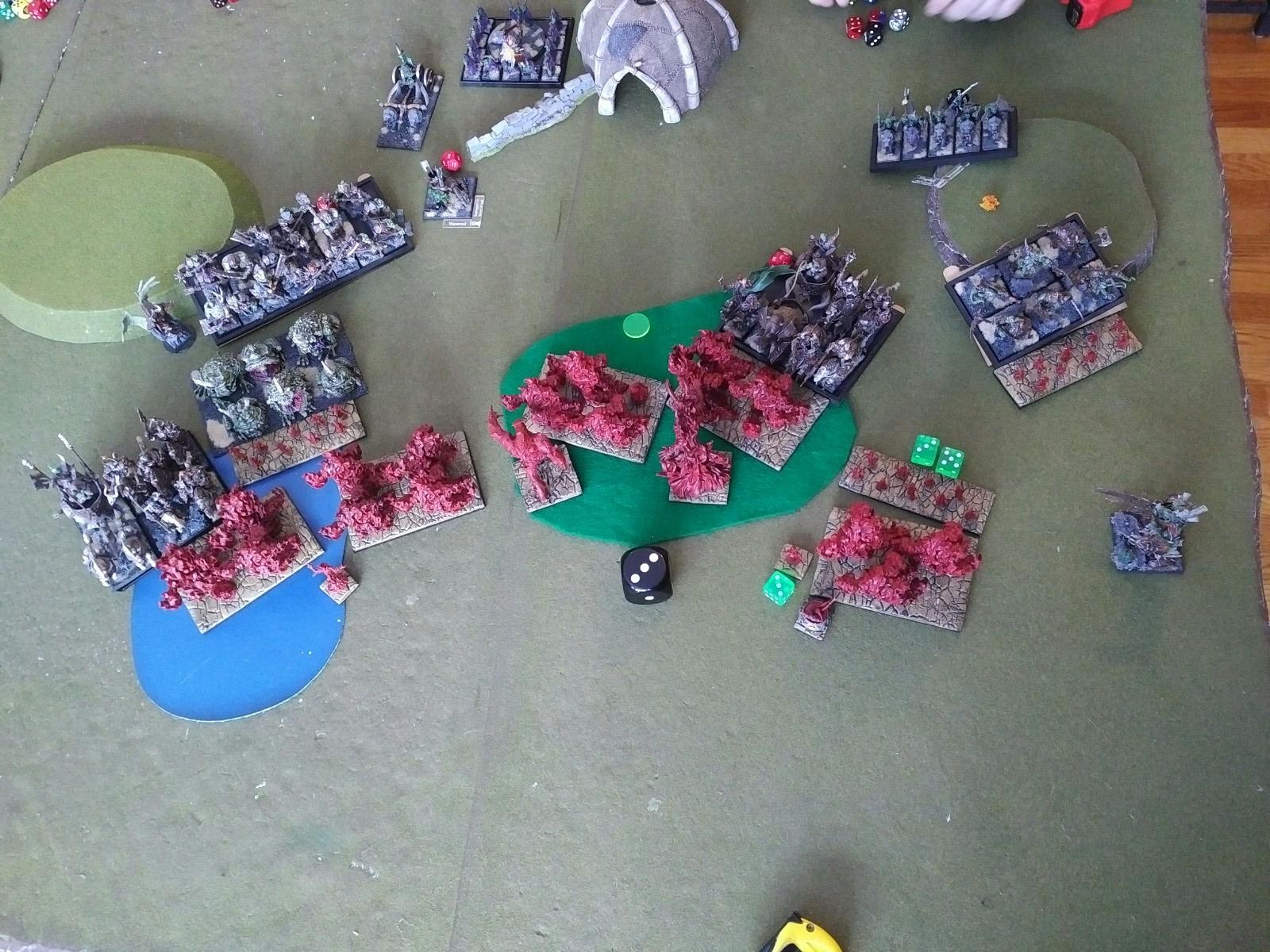 The Varangur, who are calling the shots in this game (as they tend to do), choose their dance partners: Mounted Sons crash into Fire Elementals left and center, while Direfangs and Fallen clear some Sprites. The King on Chimera had a flank on Agnes, despite my attempts to save her, which about gave me an aneurysm, but he deigned to take it as -/20 in a wood is a tough call even for a KoC! Instead the King positions to the flank to cause the red crescent major problems in later turns, pausing to assassinate the Martyr-Priest with his breath weapon 😥 The Bloodsworn also scooped up a second loot marker. 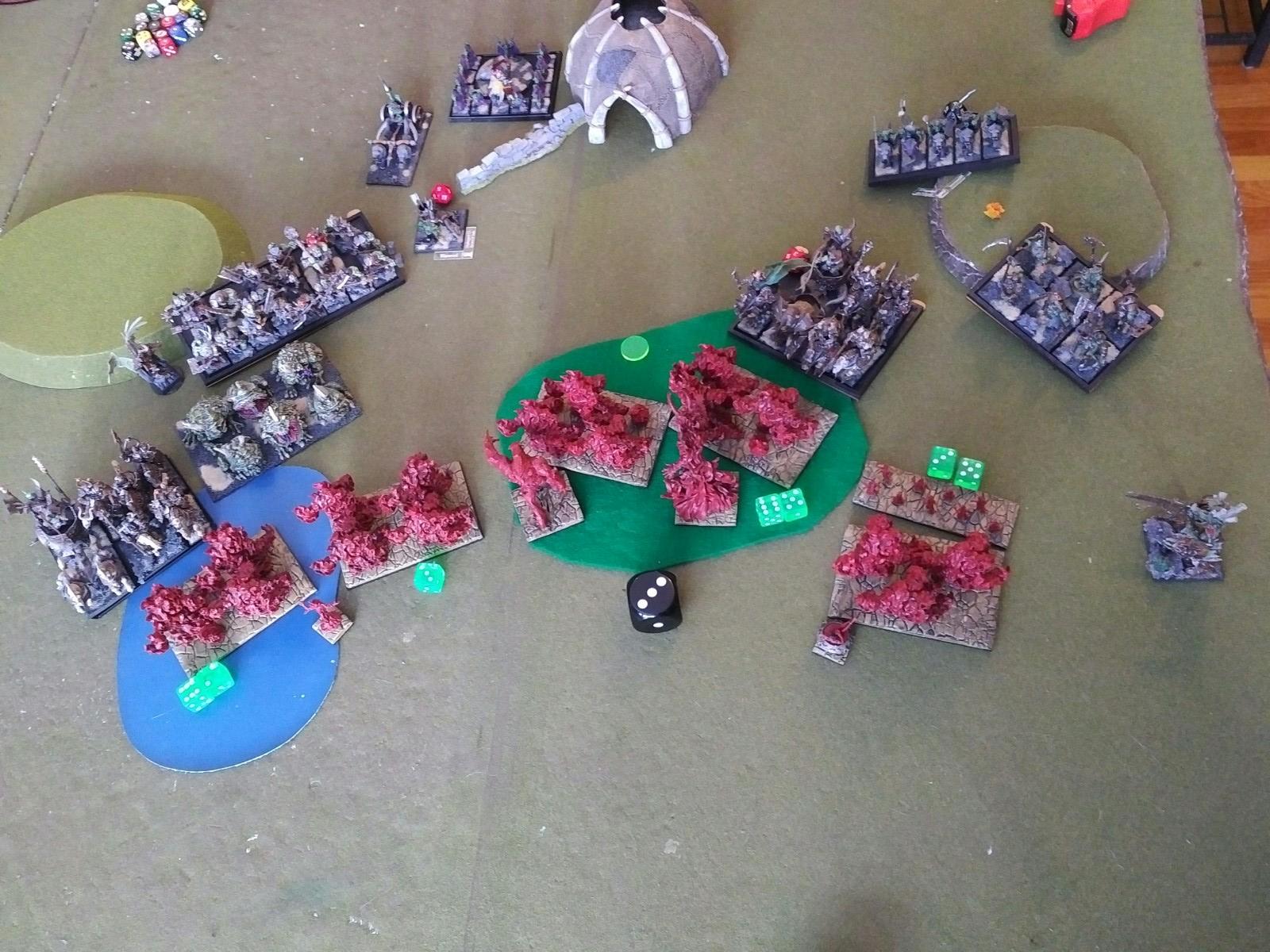 Happily neither Fire horde breaks, despite some significant damage being tossed their way. The Sprites however are toast, and some Goblin bows slap a few wounds on the courageous Fire horde. 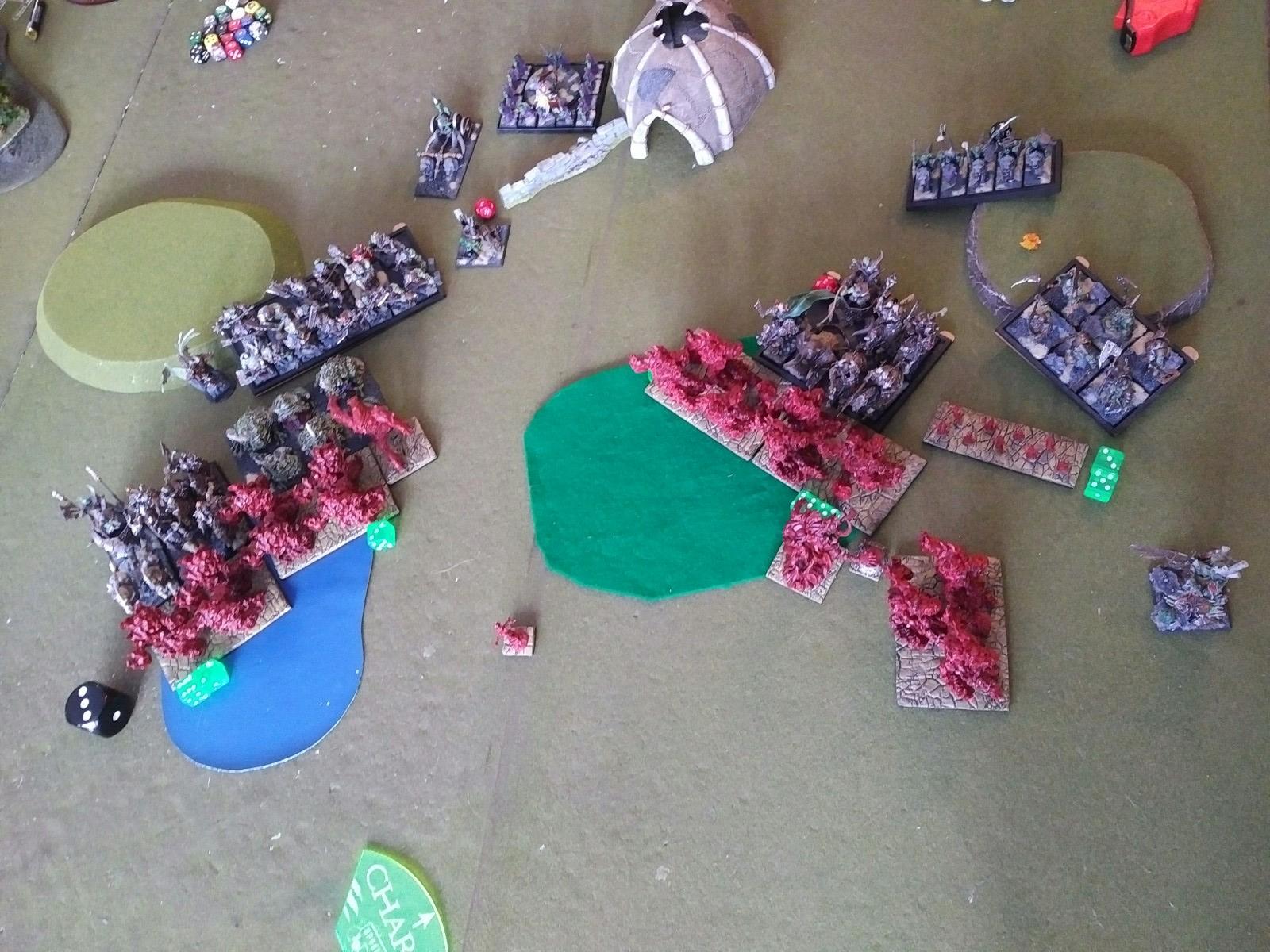 Having taken it on the red gooey chin, Bloodfire goes about returning the favor. Fire Elementals make contact with left Mounted Sons, with Direfangs (along with CLOFD), and double-time on the other Mounted Sons (during which one of those Fire hordes finally picked up the center loot marker). And the final Fire horde prepares for a 5-6” surge into the King on Chimera, which amazingly makes it (after Agnes lasered some damage into him). The last of the Sprites tries for the Sniffs but can’t land the wound needed to test them. 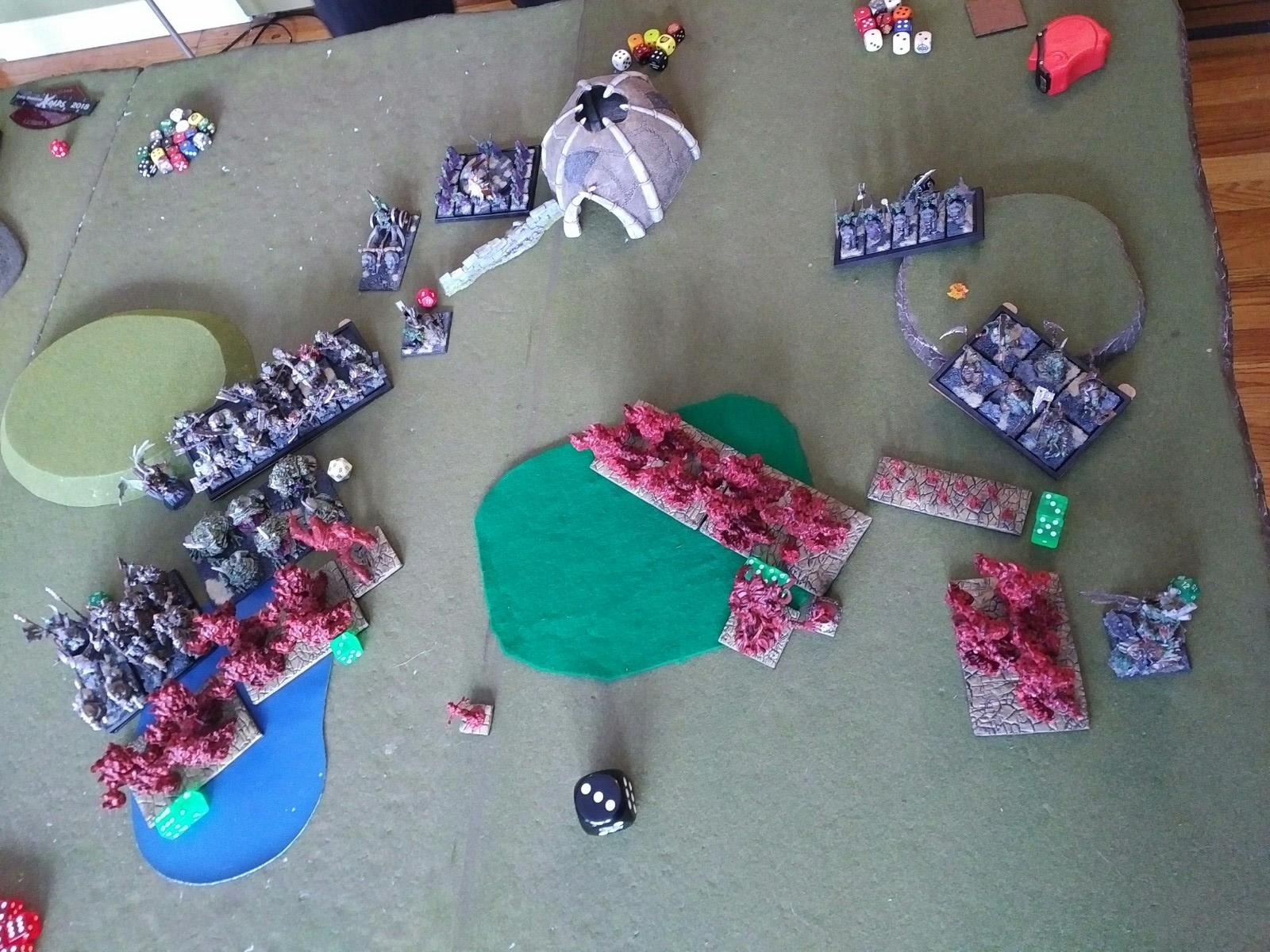 Sadly, while a lot of damage happens, only the central Mounted Sons rout. The King on Chimera actually took an impressive amount of damage (13?) between Agnes and the Fire horde, however the rerolled rout was too much to ask. 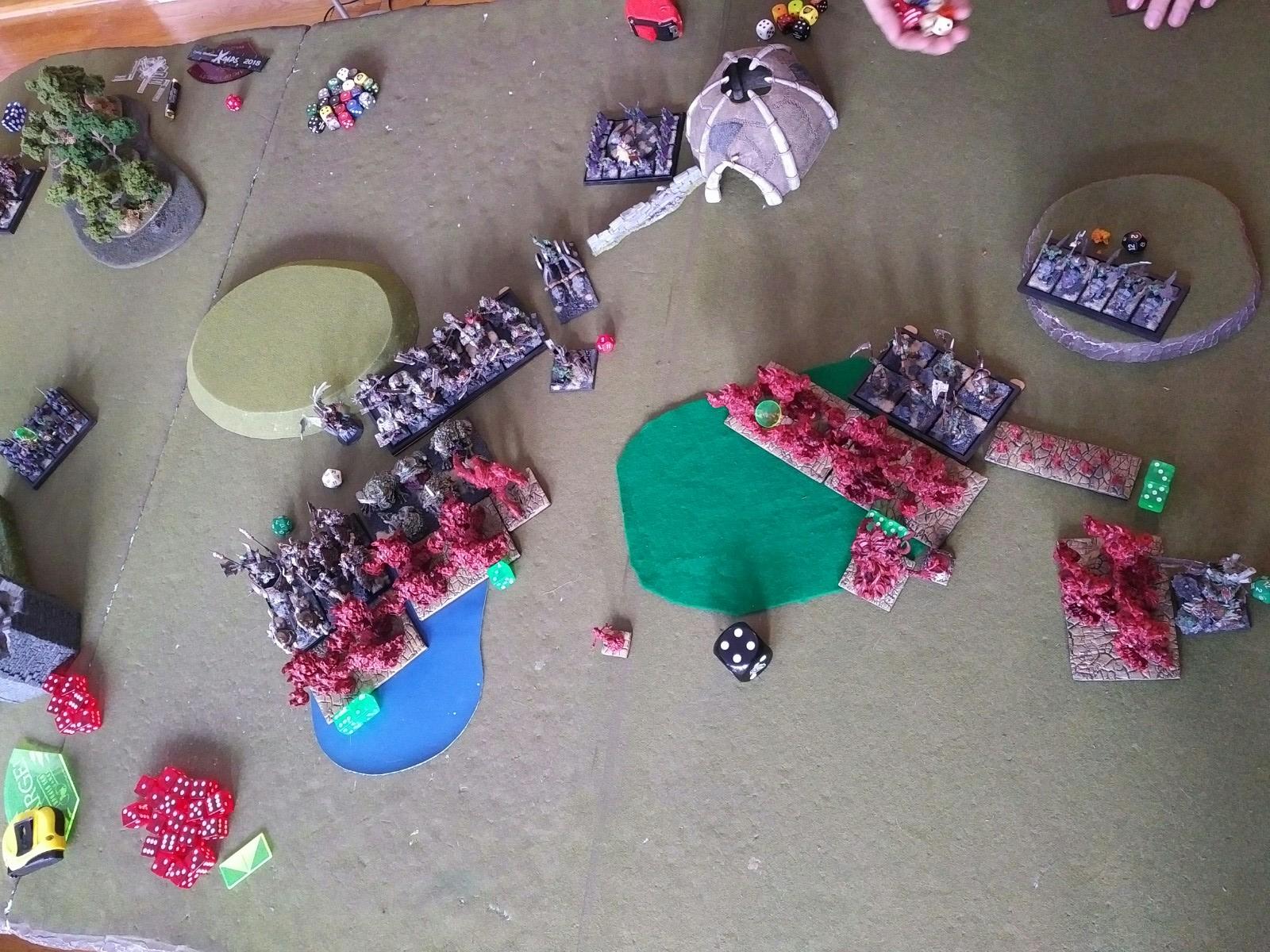 Varangur 4 and the smashing continues. The Mounted Sons and Direfangs go back into their Fire Elemental counterparts, the Fallen jump on the severely wounded central Fire horde, and the King on Chimera counter-charges his Fire horde. All the Fire Elementals in melee die except for the King’s, who take a perfect 10 of 10 damage (THIS GUY!) but hold. The CLOFD also takes 4 damage from Gobliny shooting aggression. 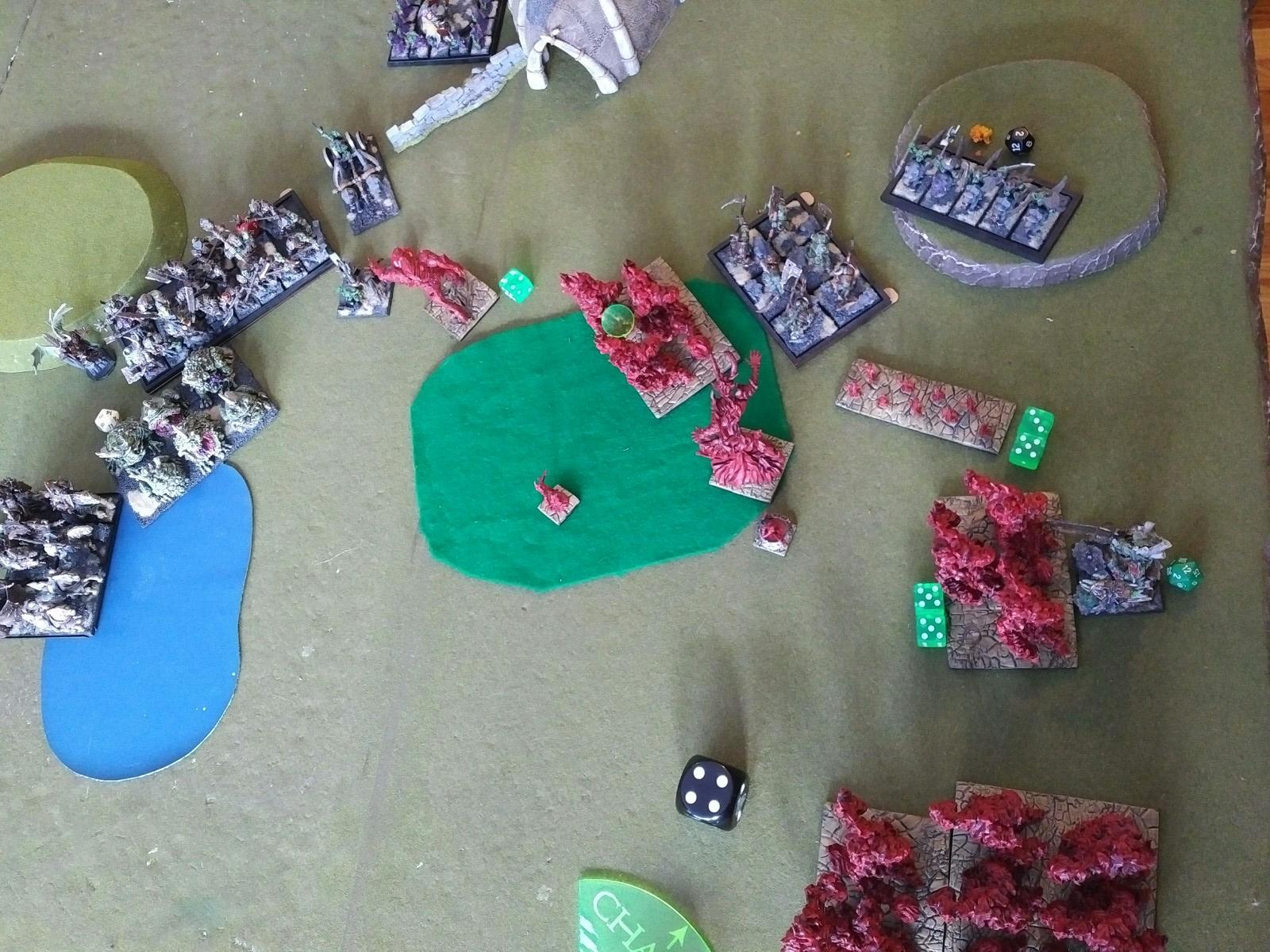 Bloodfire is rapidly melting, but we’ve got plenty of tools left. The King’s Fire Elementals head back in to end his reign, while everybody else prepares for the shooting phase or simply gets the hell out of the way in the CLOFD’s case. The last Sprites puke on the Sniffs, killing them, while Agnes blasts the Fallen and the Inspiring-Priest surges in the loot-bearing Fire horde … 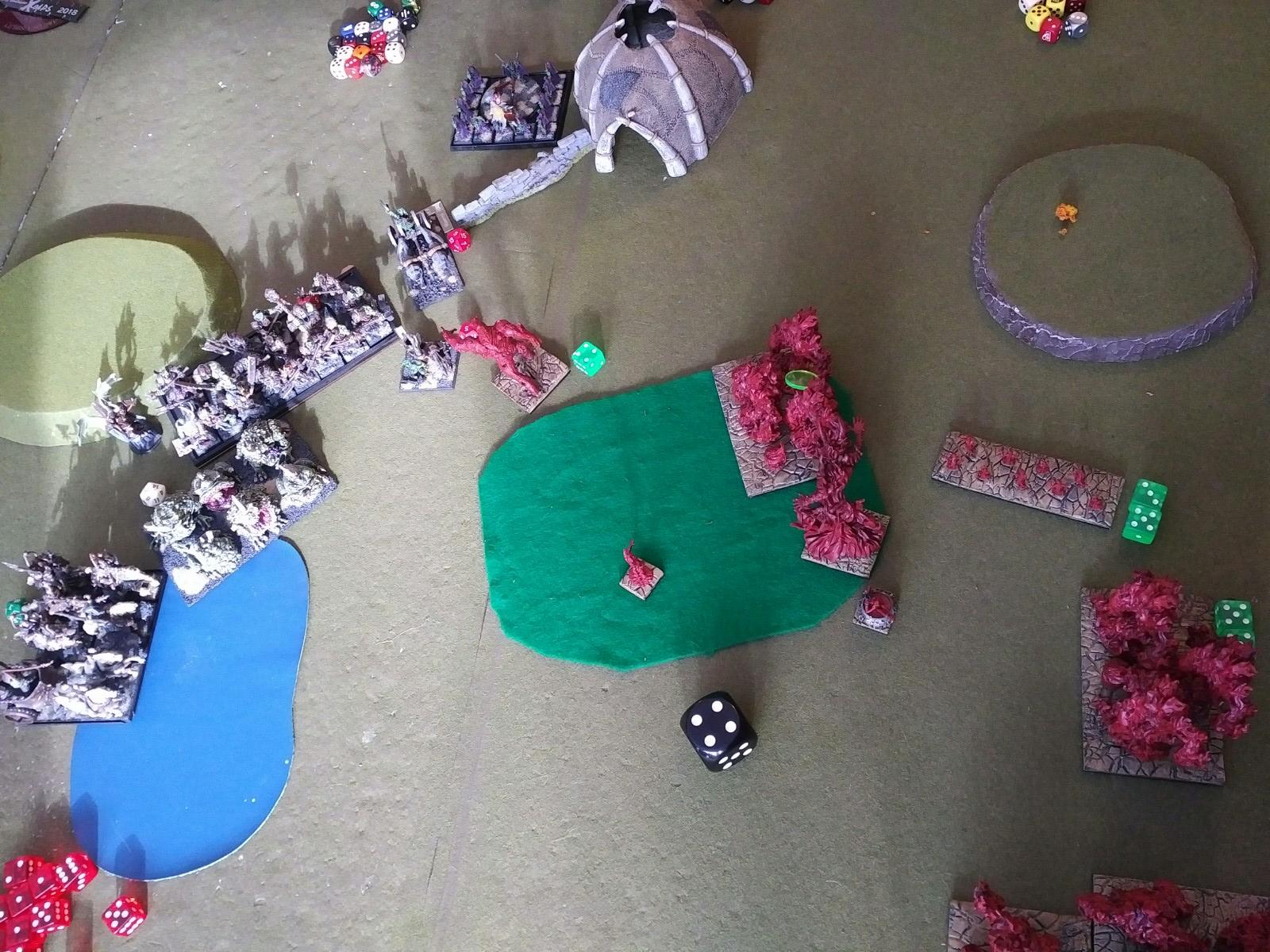 … who smash the Fallen and prepare for more action. The other, mangled Fire horde is able to drop the King on Chimera, which is automatically a victory for me as I rarely am able to take the thing down.

^ I do make a bit of a mistake here, as I made sure the Mage-Priest is out of range of the Mounted Sons but didn’t really check the Direfangs, which it turns out she’s within 12” of by about 0.5”. She couldn’t have moved further, as she needed to cast surge, but she could have accepted her fate and run out into the open to the South, avoiding any chance of an overrun by the toads (and setting them up for counter-charges). This was dumb, and I felt even worse when I saw I had left the flank of the CLOFD open, even if there wasn’t a lot I could have done without nimble. 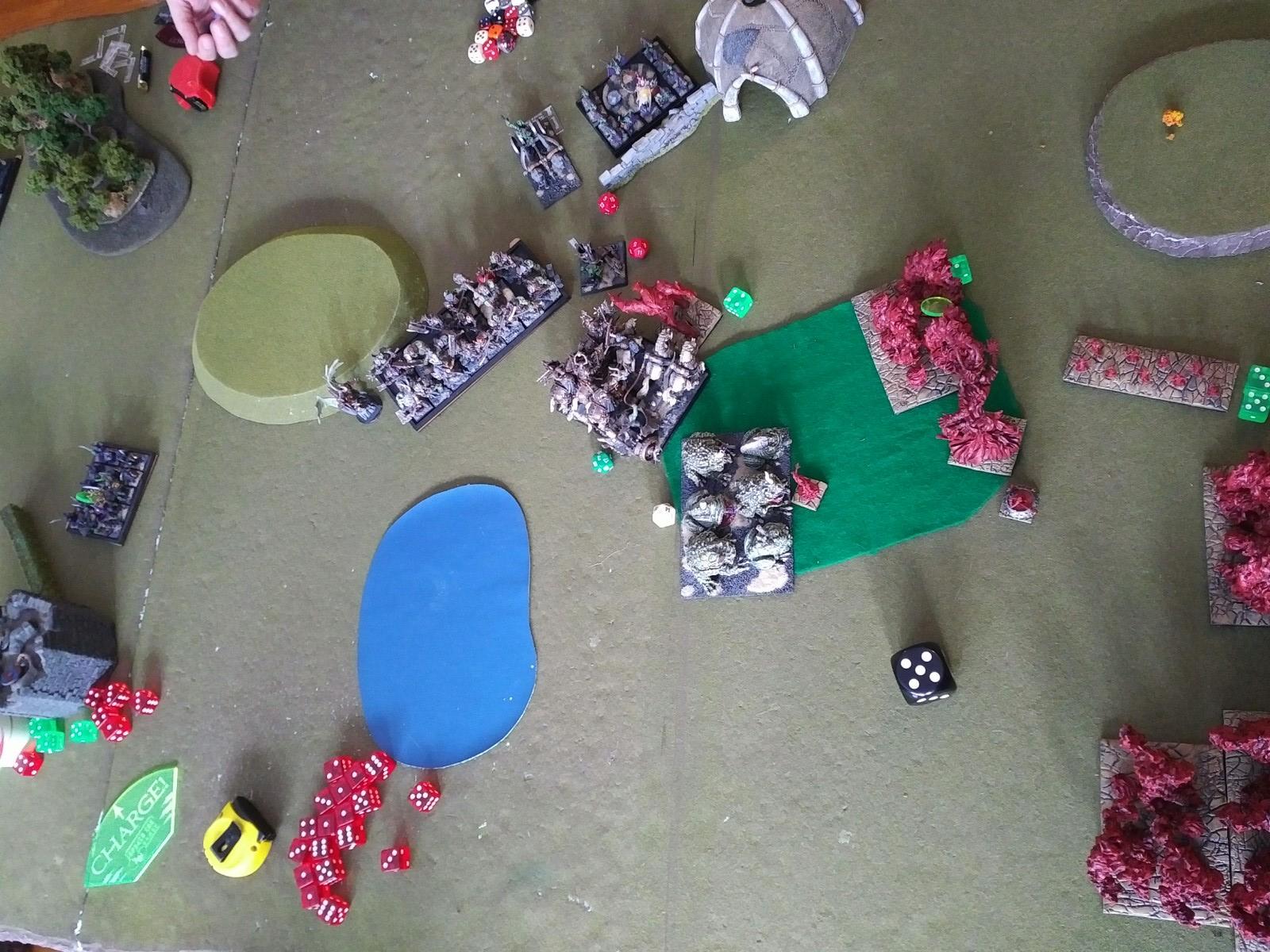 The Varangur left hook continues powering in. The CLOFD cops an unexpected flank from the Mounted Sons (who had given their loot to some Spitters), as does the Mage-Priest, with a potential overrun into Agnes’ flank? CLOFD and Mage-Priest eat it, although there’s no punishing overrun into Agnes / Fire Elementals. The loot Fire horde takes a damage from Goblins in the meantime. 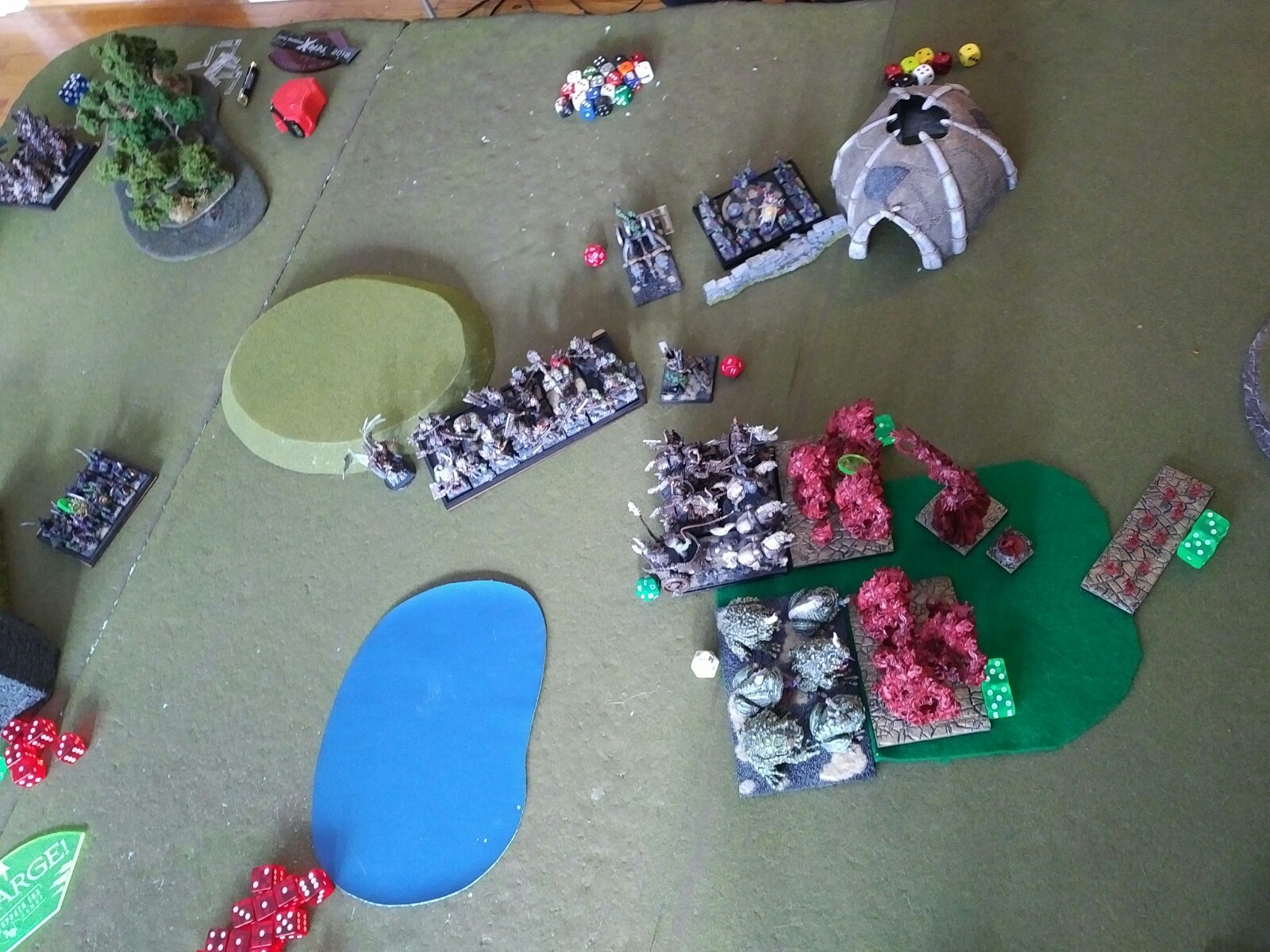 Even less Bloodfire left now! The loot Fire horde charges the Mounted Sons (for vengeance), as does the other Fire horde tackle the Direfangs (more vengeance). 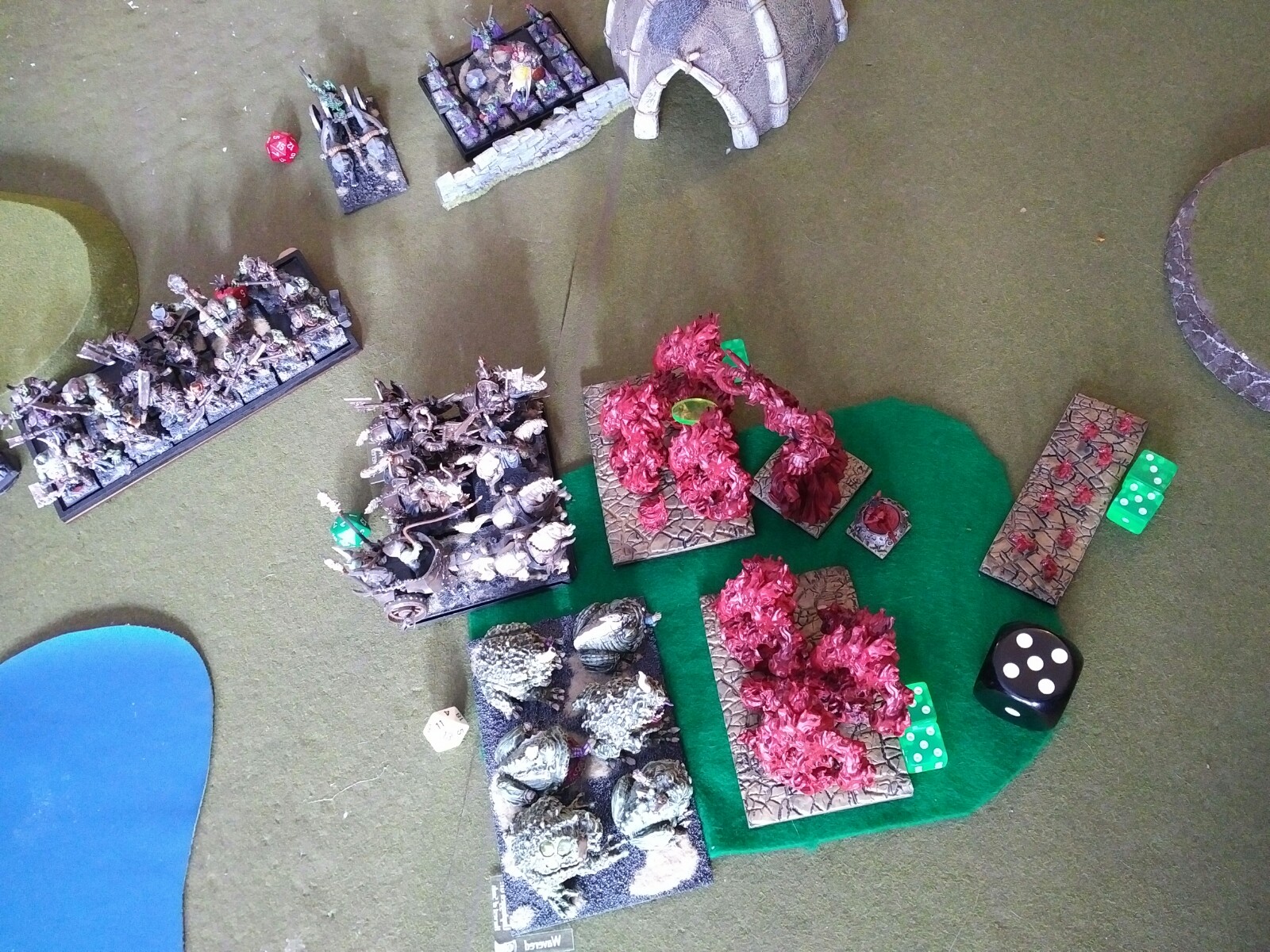 Agnes frags the War-Trombone but the Fire Elementals waver both of the units they’re fighting. 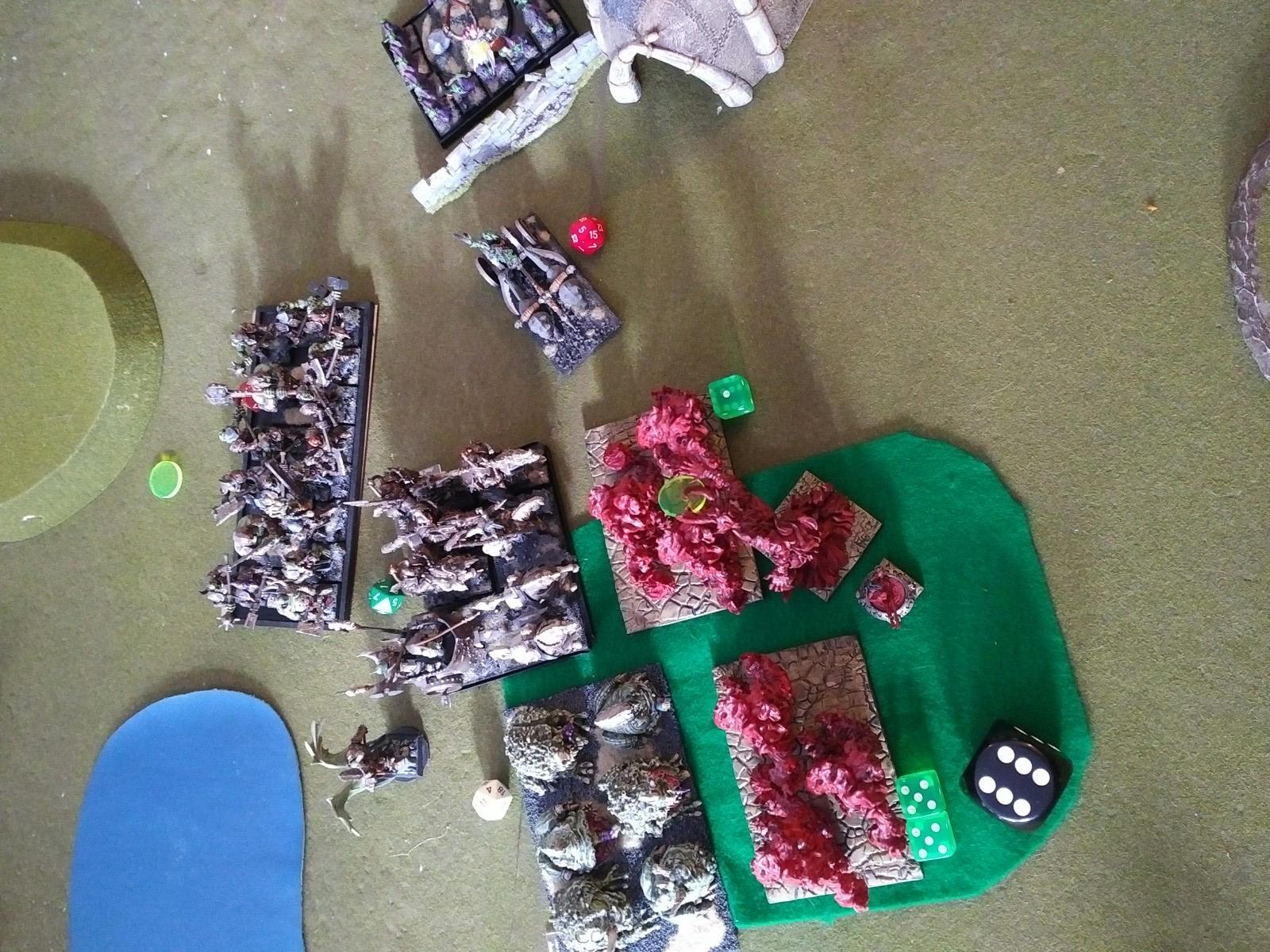 Varangur 6 mostly involves increasing the pressure and shooting Goblin bows at Ember Sprites, who die. It’s unclear what the King on Chariot is up to, he may have tried for shot on the heavily wounded Fire Elementals while blocking Bloodfire charges. 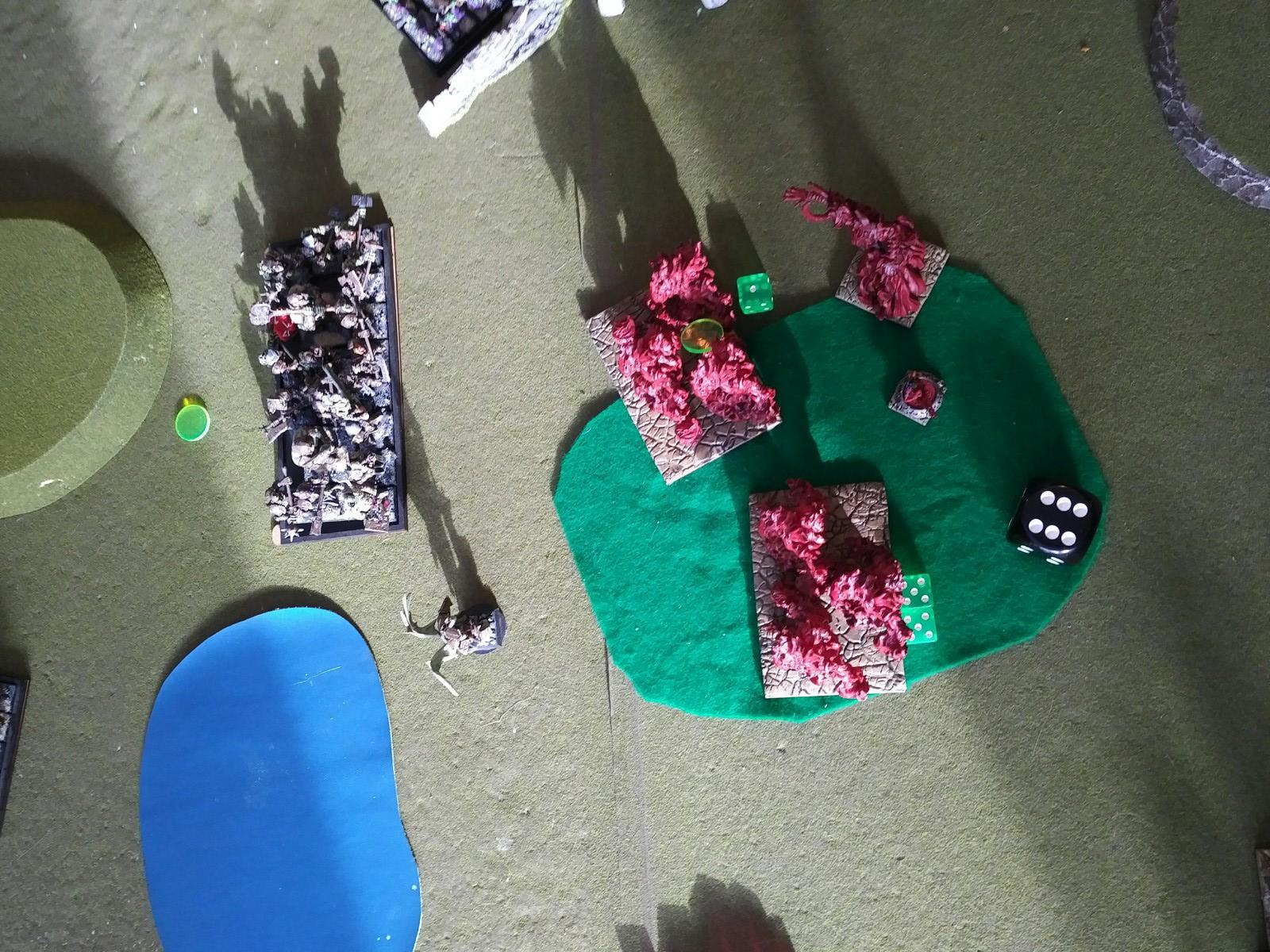 Dramatic lighting for a brutal turn! The Fire Elementals shatter the Mounted Sons and Direfangs, ending their long campaign of terror. Agnes evaporates the King on Chimera under her molten gaze.

With the game 2:1 in the Varangur favor, he rolls and there is indeed a Turn 7! 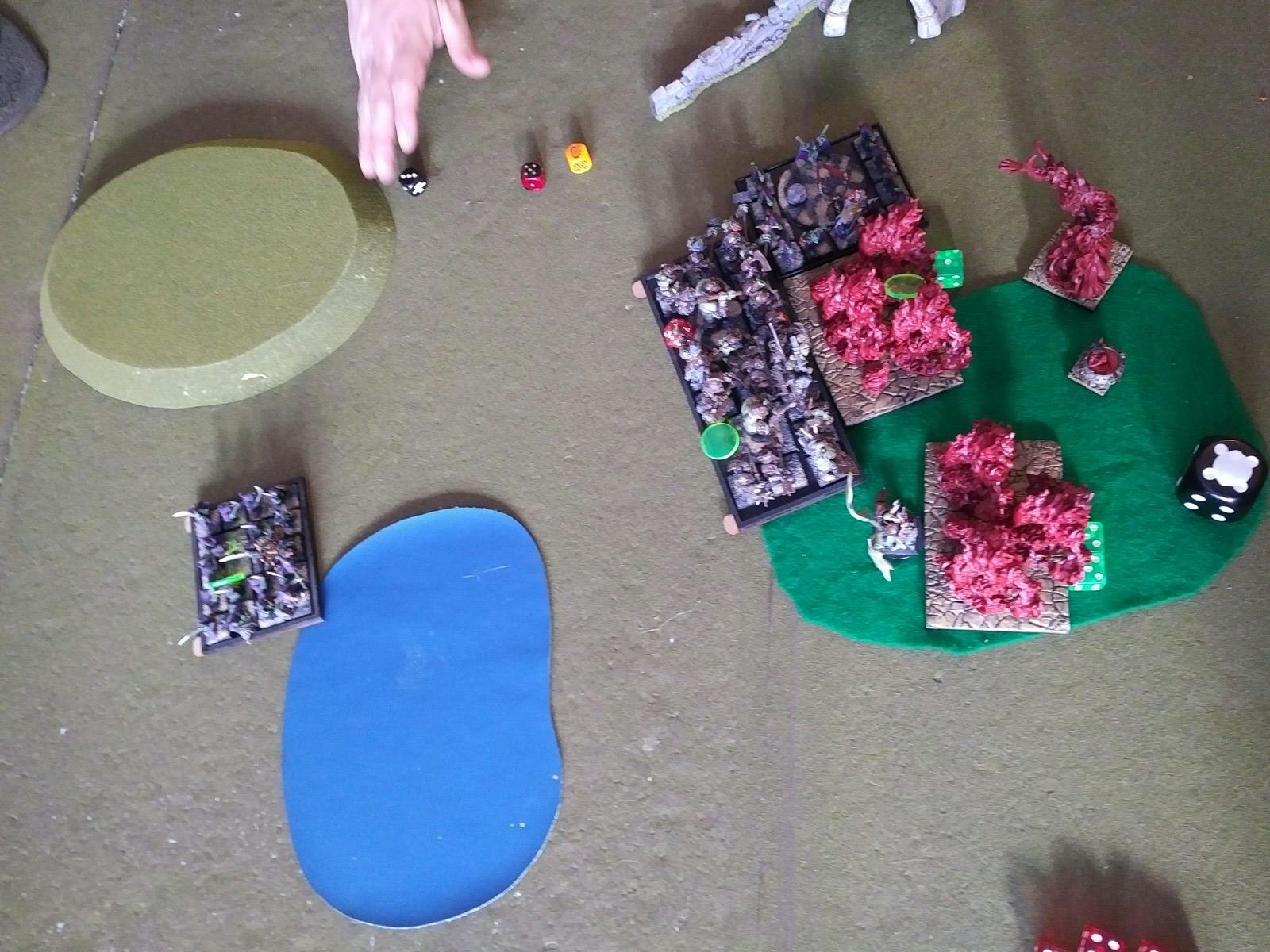 The mostly-fresh Fire Elementals carrying loot are mobbed by Bloodsworn and Spitters, as Magnilde makes an appearance and charges the other, smoldering Fire horde. 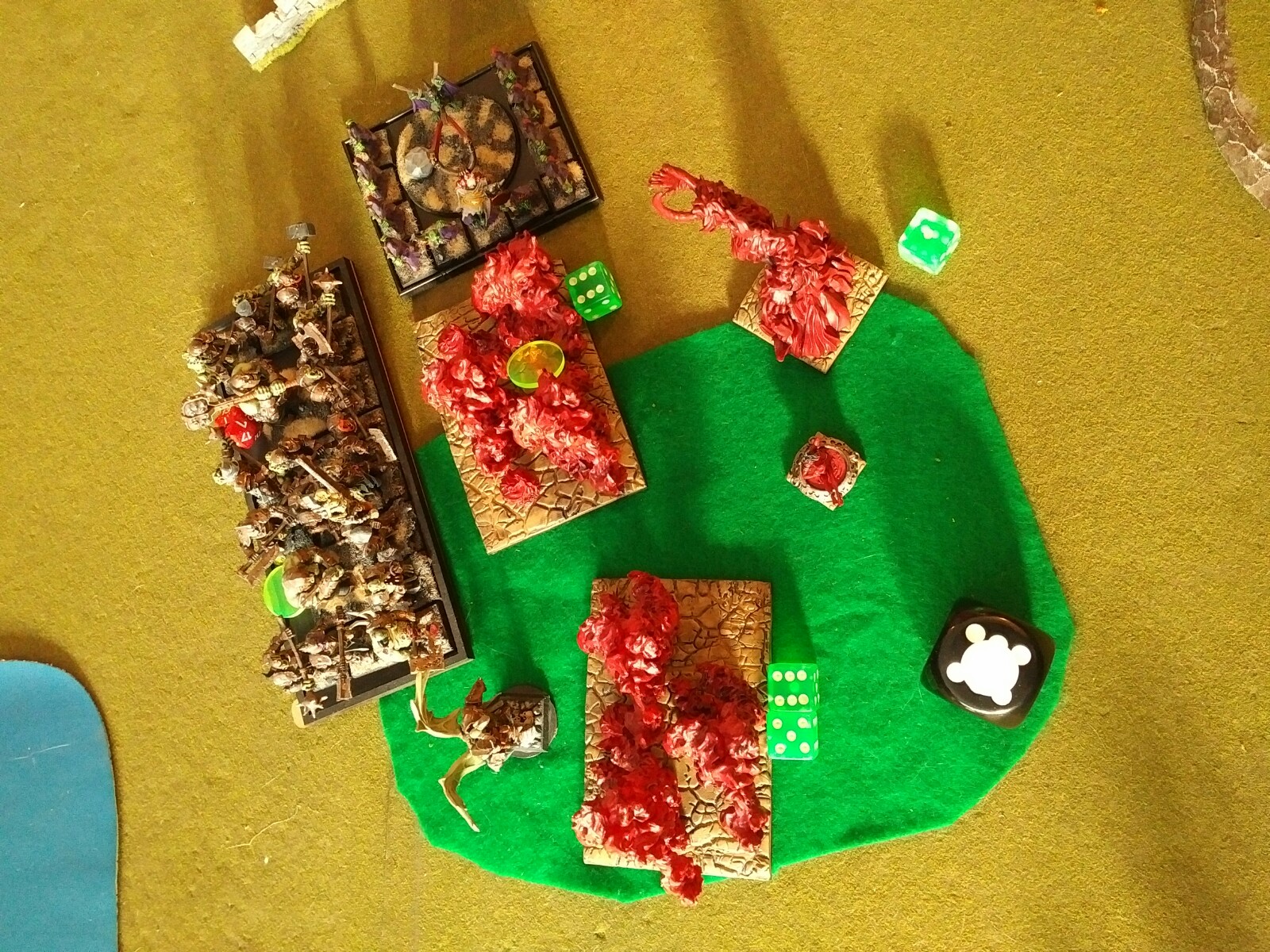 Preposterously Magnilde fluffs, doing a single point of damage, and the loot horde survives on 6 damage. Whoa. The Spitters with loot tag Agnes for a wound, after a long trek into relevance. 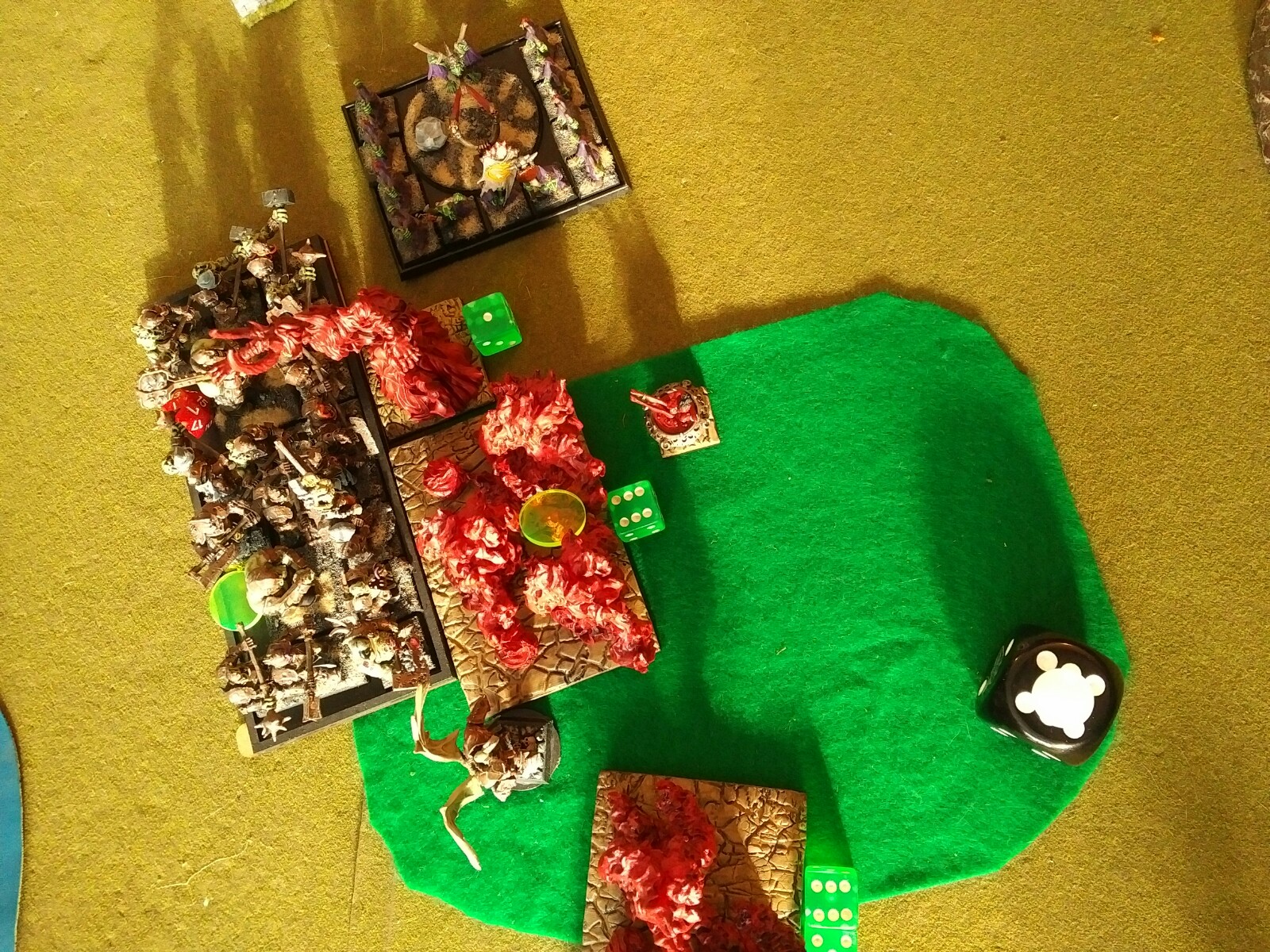 Agnes and the looted Fire Elementals crash into the Bloodsworn, pummeling them for admirable damage but they can’t hit that high Varangur nerve. As fun as that last burst of violence was, it’s still a …

This game turned out much more fun than I expected – I was very tired, up against a Masters-level list piloted by a dude who knows what he’s doing, and me with an army I know is weak and I tend to get frustrated with. There were some dumb positioning things that reminded me how out of practice I am, and I freaked out about that early Agnes flank a lot, as I direly overvalue the King on Chimera and figured she was dead already. But the match turned out closer than things usually are against Varangur.

I should be back with at least one 2350 practice game (I hope!) before Orc Town, then it’ll be a 5-game tourney report and Bloodfire goes into retirement until third edition I’m guessing.