Bottom table, baby! After getting housed by the Green Lady’s lackeys, my crabs plummeted to Table #22 to face off against some other downtrodden fish people. Coincidentally Table #21 also had a Trident Realm army on it, meaning that between the three of us we’d gotten 3 points total in Round 1. Gooooo Trident! 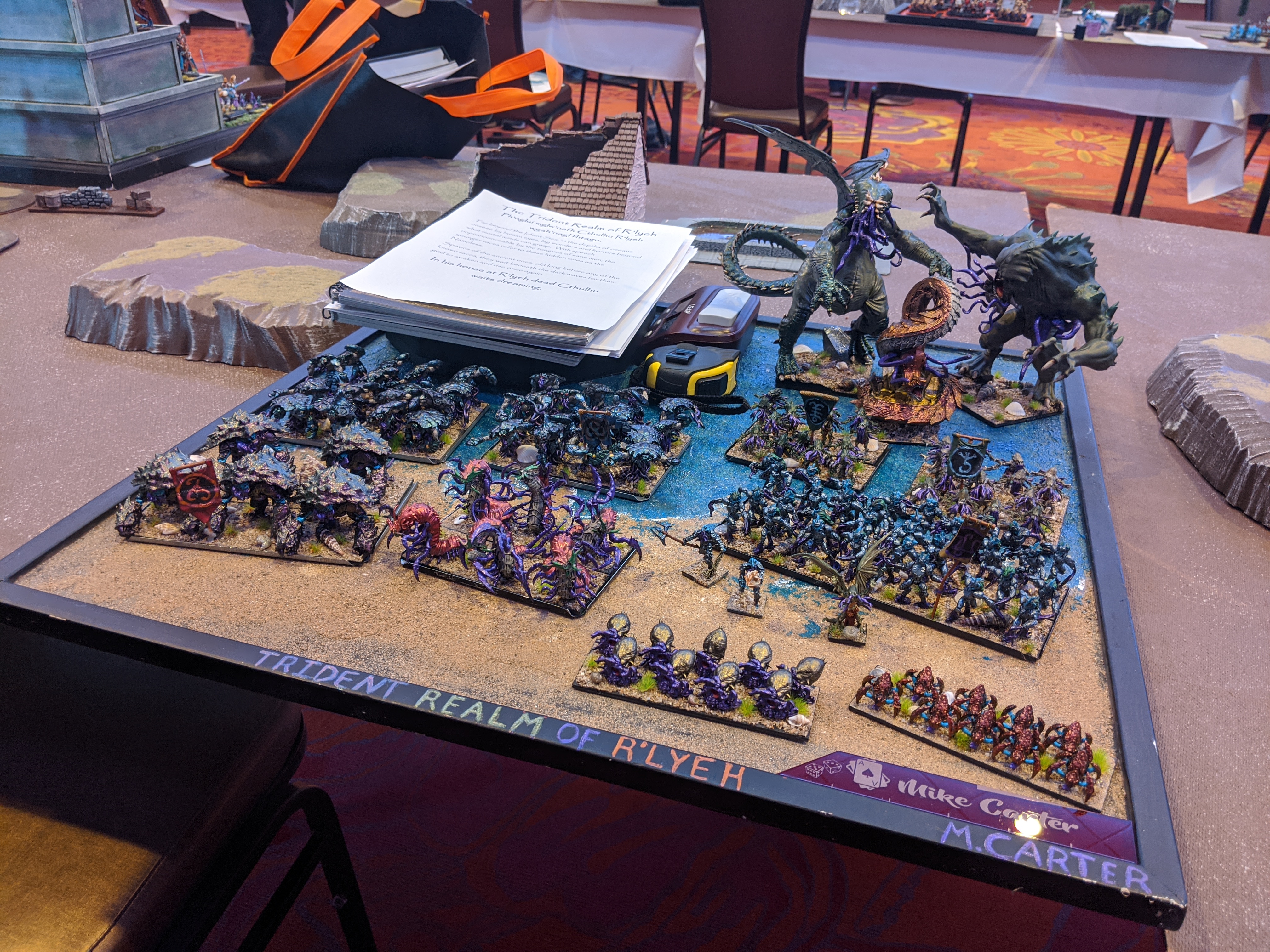 One of the awesome things about playing alongside the US Masters was seeing armies and players I know from the internet – and it’s even cooler to get to scrum against them! This round I faced the dude who runs the Unt l Somebody Loses An Eye, who I had just that morning been talking to about Wyrd’s game The Other Side. I really love his army and how much Mantic he crammed in there by thinking laterally and using Nameless from Warpath, and his big bads are great minis and BIG. Comp-wise it seemed good, certainly more balanced than mine but nowhere near the amount of shooting. ALSO:

Round 2 was Push, and the Scuttlers went first again, probably not by choice. 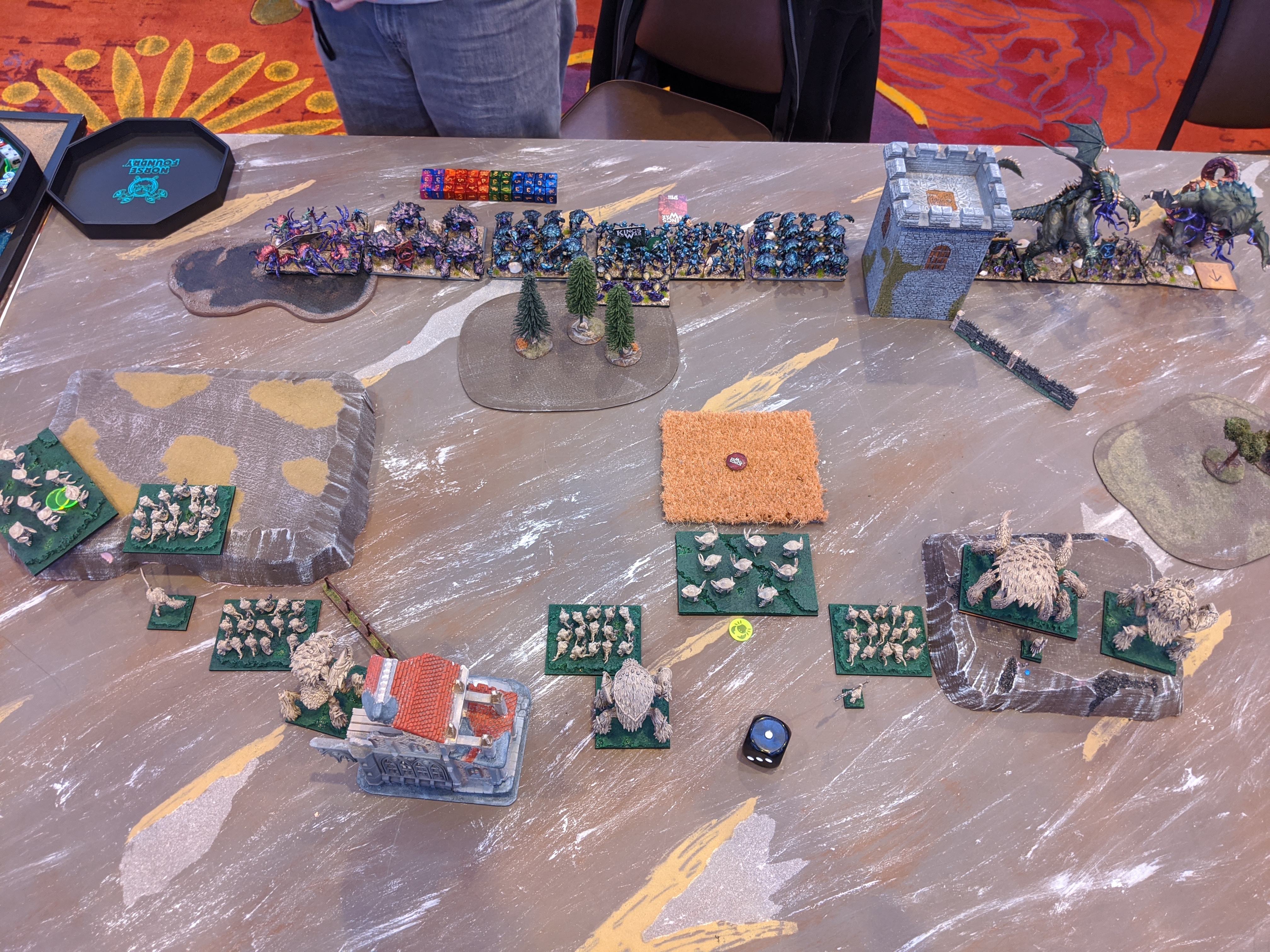 *crab sounds* Lots of advancing. Kraken play it cagey, content to project force, or at least the threat of it. My tokens are in the left Gigas (x2) and the left Kraken near the house; his are all in the central Ensnarer horde (x3). Heartpiercers ventilate a scouted Tidal Swarm for first blood. 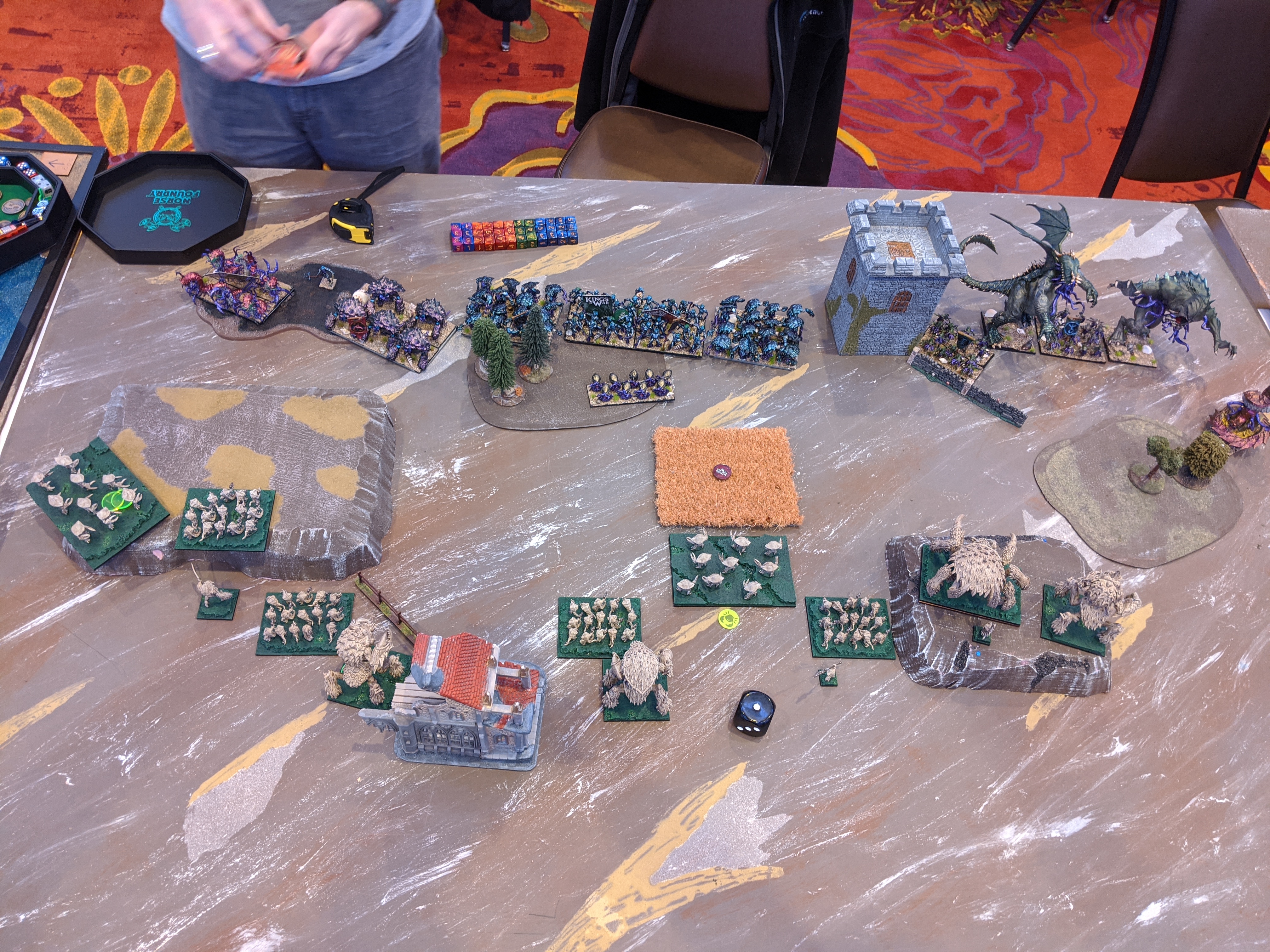 *gribble sounds* Cautious response from Cthulhu and friends. Most relevant note is the Knucker begin to work that flank but not stepping into those right woods. 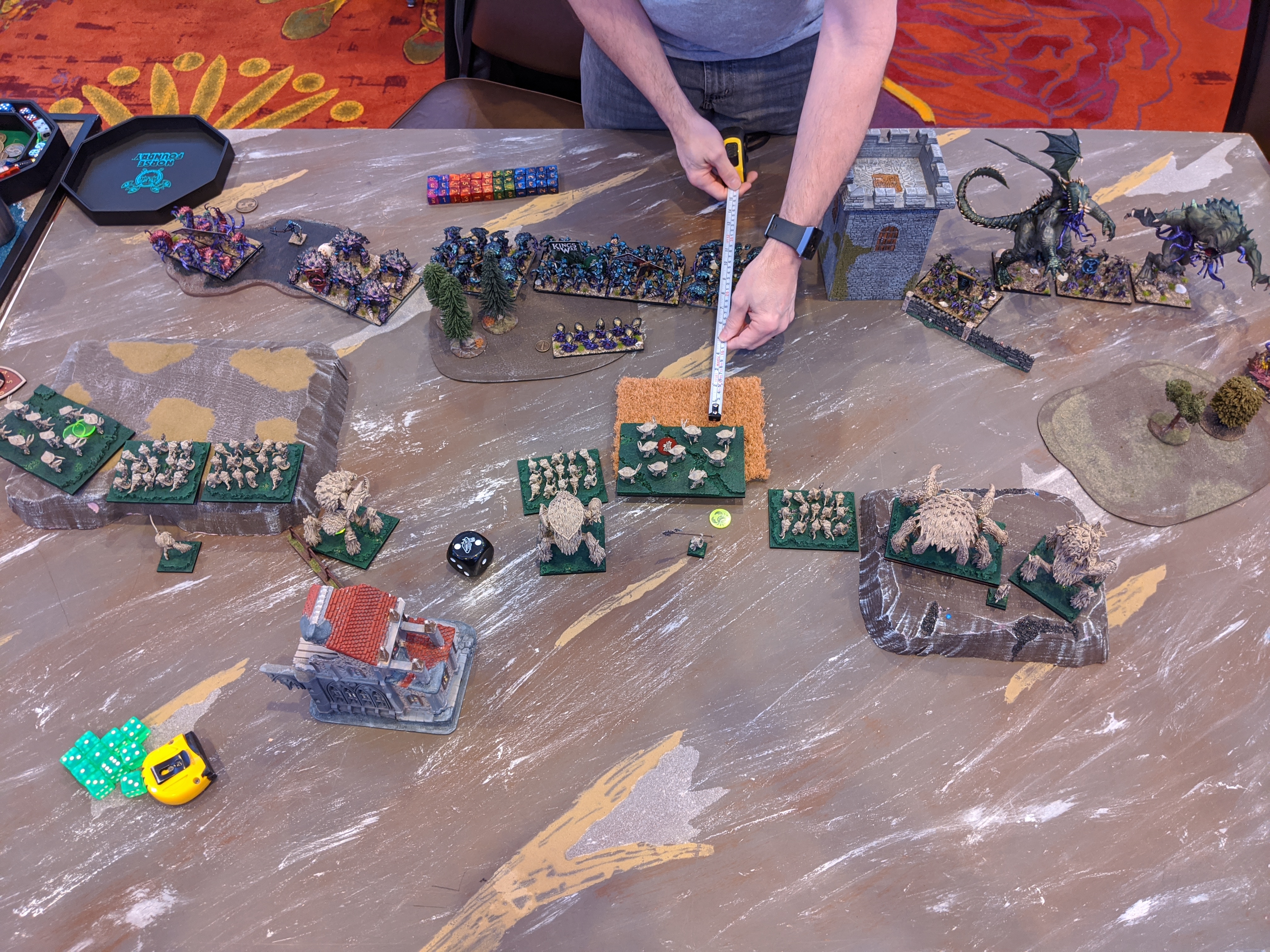 Central Gigas scoop up the central token and prepare to flex hard – tho Ensnarers and Placoderms aren’t the smashiest units, Thuul are lurking nearby. Lots of positioning happened on the flanks, inviting him to break the standoff, while Heartpiercers unload into the Depth Horrors hard left (5 damage) and the Tidal Swarm middle (1 damage). 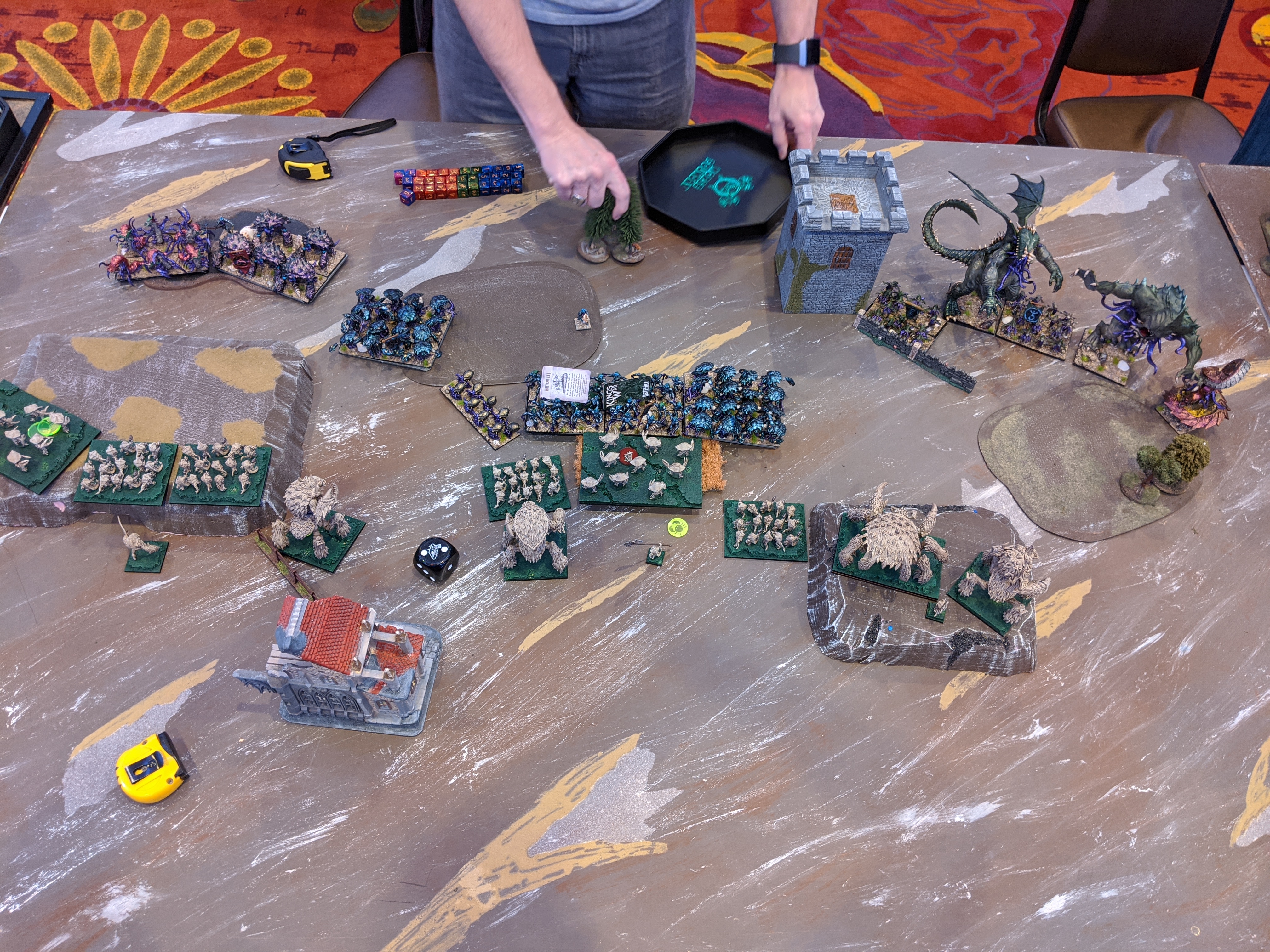 The Gribble Realms let ‘er rip in the center, sending Ensnarers and Placos into Gigas for a proper anvil-off, with that annoying Tidal Swarm getting in the way of Kraken vengeance. His flanks increase the pressure, presenting me with plenty of bad options. Gigas hold easily (3 damage). The Depth Horrors also ate their healing brew. 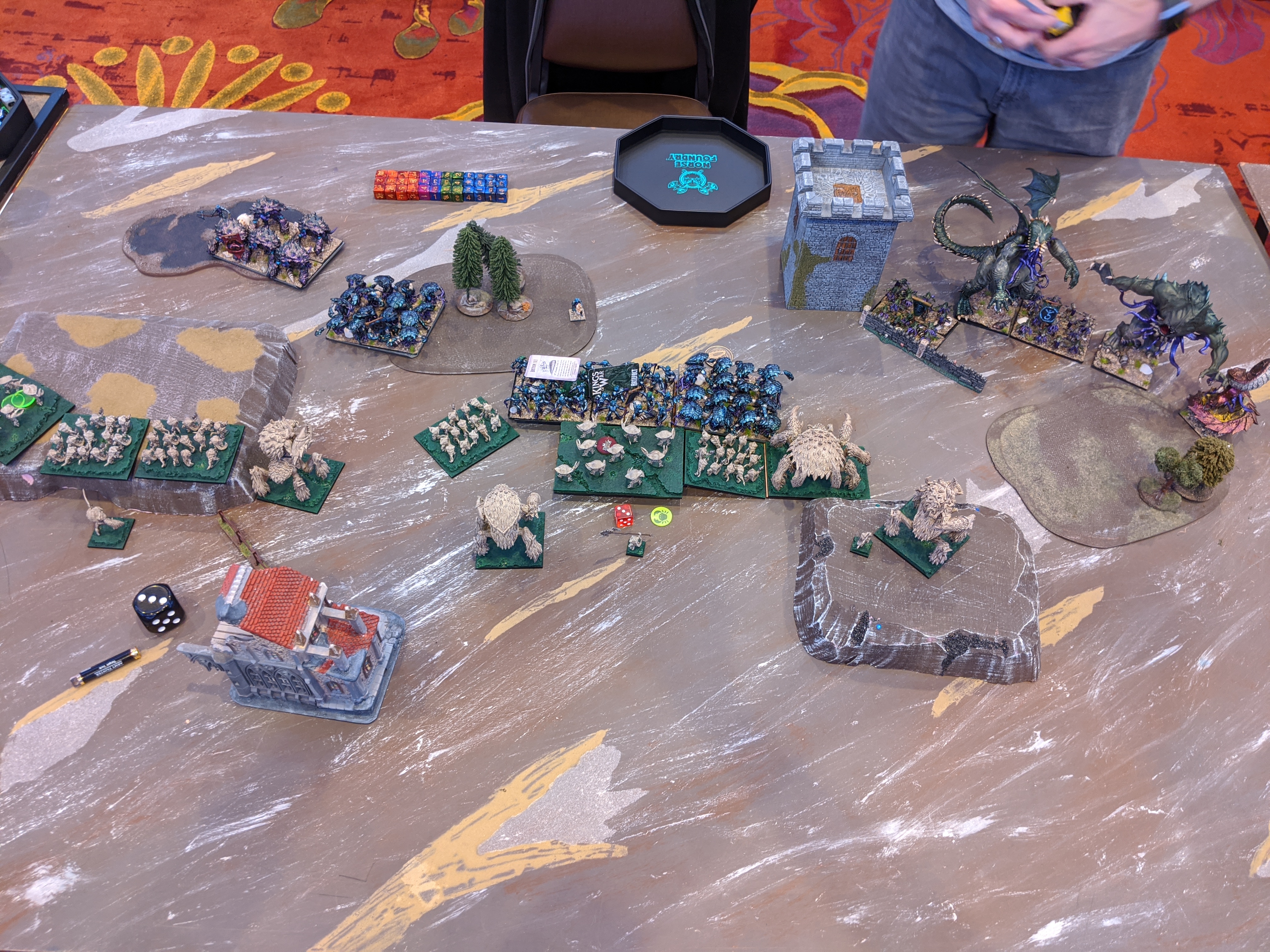 Turn 3, time to take a risk (Spoiler: risks very rarely pay off with TR!) Gigas + Heartpiercers + Water Elementals slam into the central Placoderms, looking for that pop-n-spin. More Heartpiercers charge that Tidal Swarm, while yet more Heartpiercers riddle the Depth Horrors with harpoons, routing them. The right Kraken takes a deep breath and makes sure all those big bases are in his front arc, while the left Kraken (still with a token) invites the other Placoderms to have a go.

Anyway, that big combat in the middle doesn’t work out. Loads of damage (10+) but can’t land the double rout. Sad times ahead, gents. Those Hearpiercers totally rock the swarm tho. 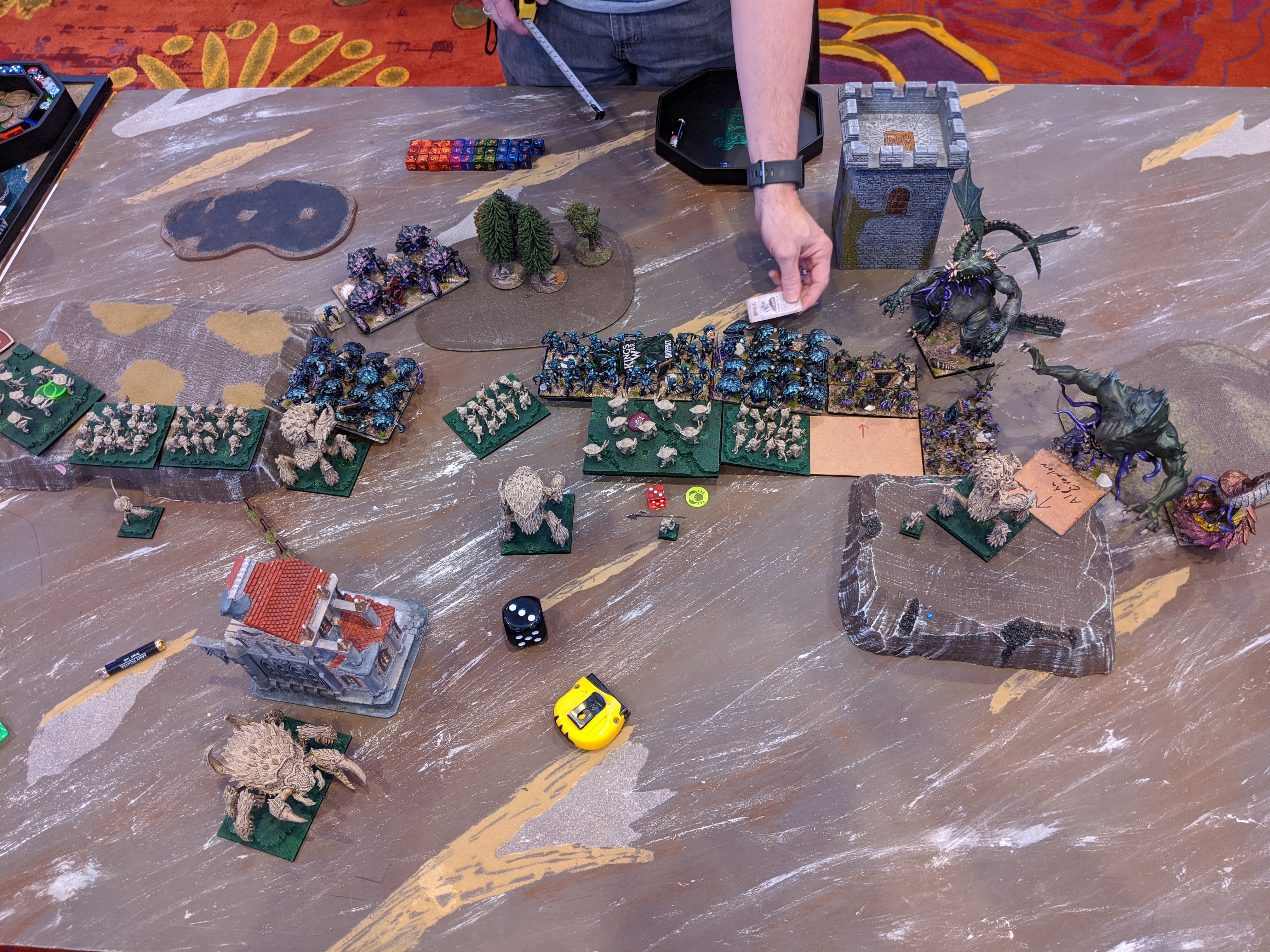 Here we go! Thuul regiments mob the Water Elementals, with some Placoderm support for good measure. A Kraken slams into my right Kraken, with Knucker ready to toss in next turn. The Ensnarers have a go at the central Gigas, and those other Placoderm head in to poke at the left Kraken. His Gigas and Cthulhu-kraken head towards the center. 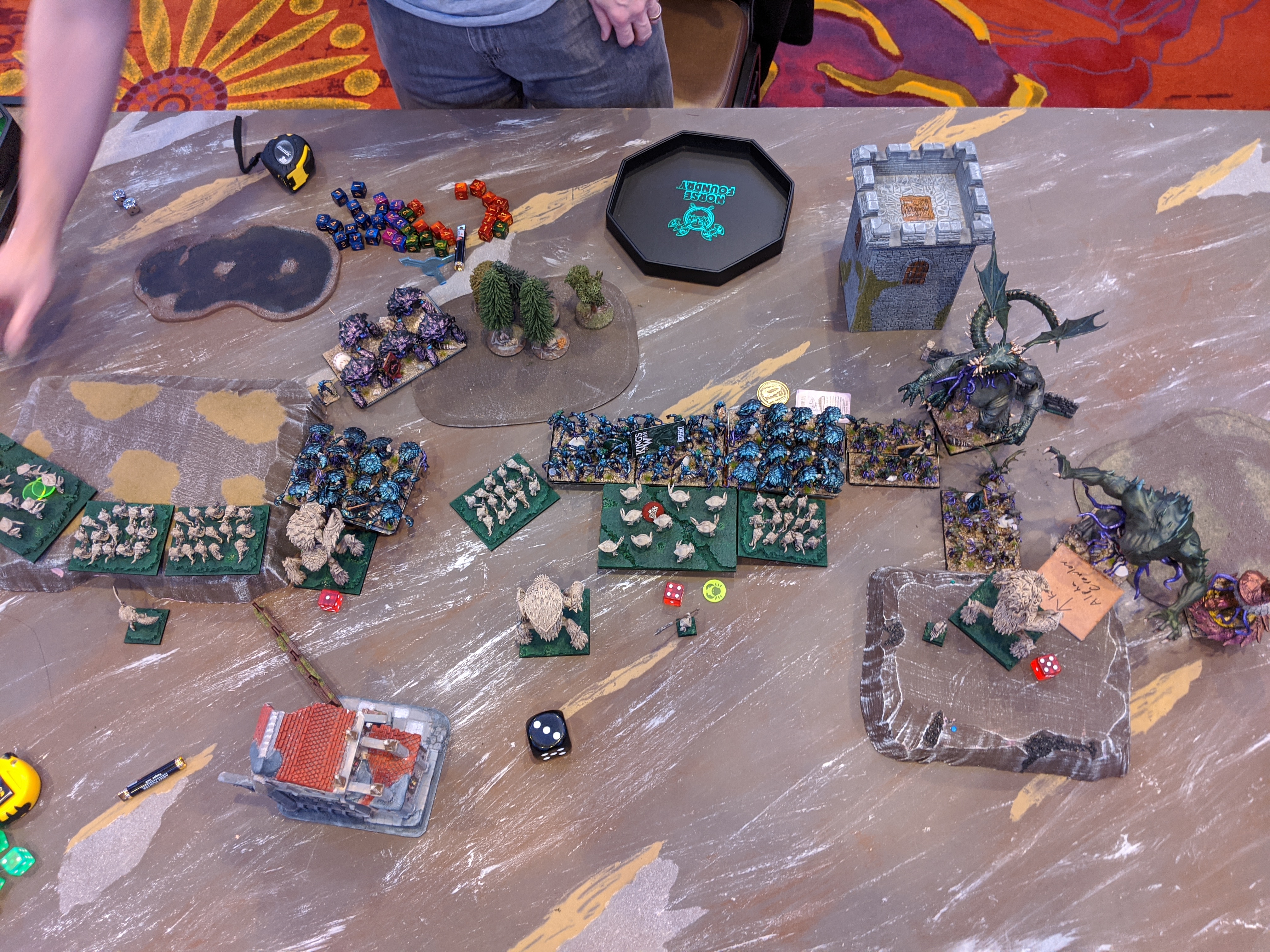 The Water Elementals are shredded by the Thuul wave, but other damage is negligible. 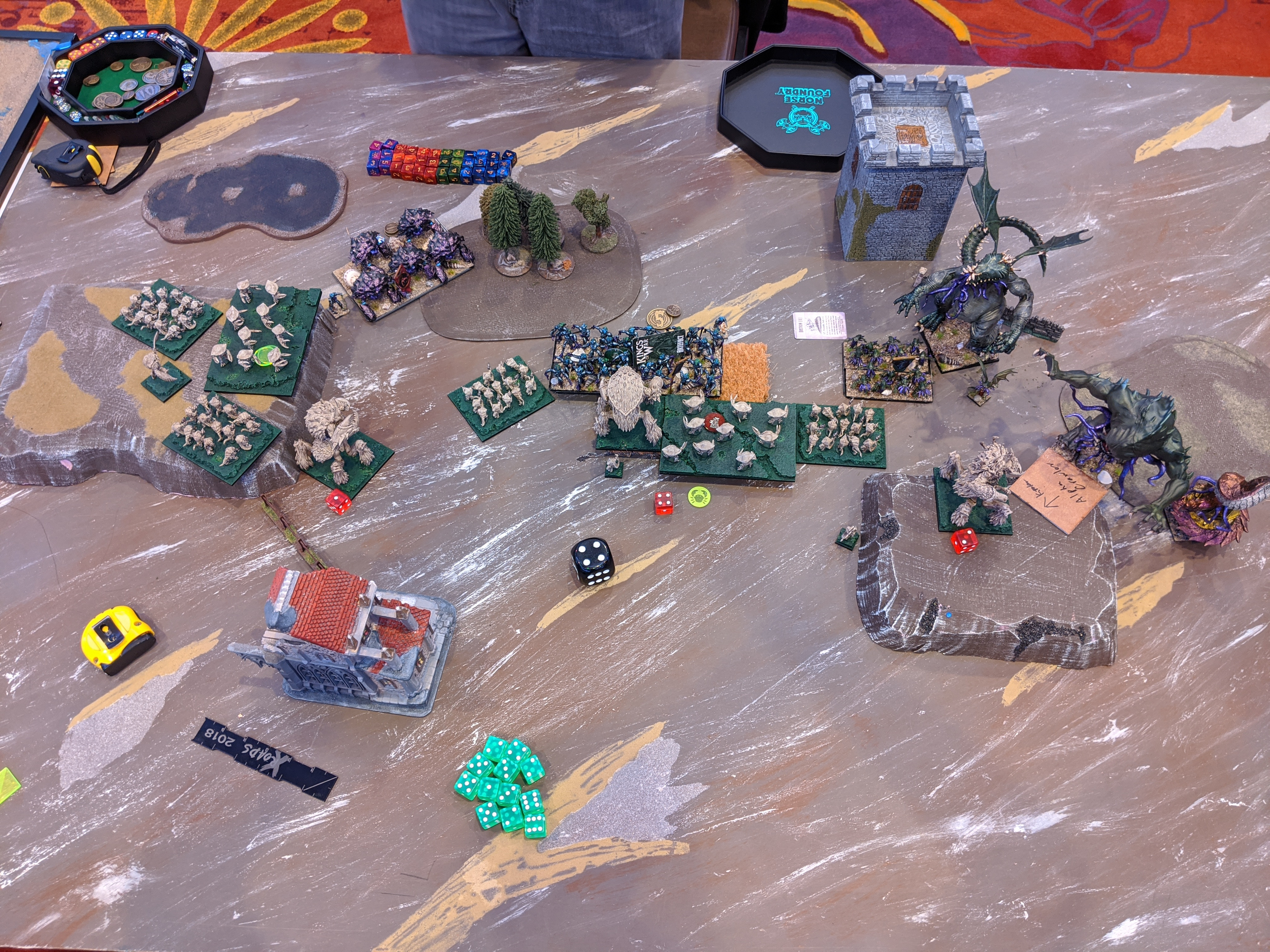 Scuttlin’ Turn 4, the grind increases, with some fortunate flanks. The central Gigas + Heartpiercers counter-charge their Placoderms, finishing them. The right Kraken grabs the flank of some Thuul, devouring them (this may have been a mistake? Or he expected to at least waver my Kraken but did the combats in the wrong order?) On the left, my other Gigas grab the flank of his other Placoderm, shattering them with the Kraken’s help in the front (this was certainly a mistake, he looked pretty crestfallen after missing that flank). The central Kraken mashed into the Ensnarers for respectable damage (6?) but whatever.

In shooting, Heartpiercers rock his Gigas, wavering them. 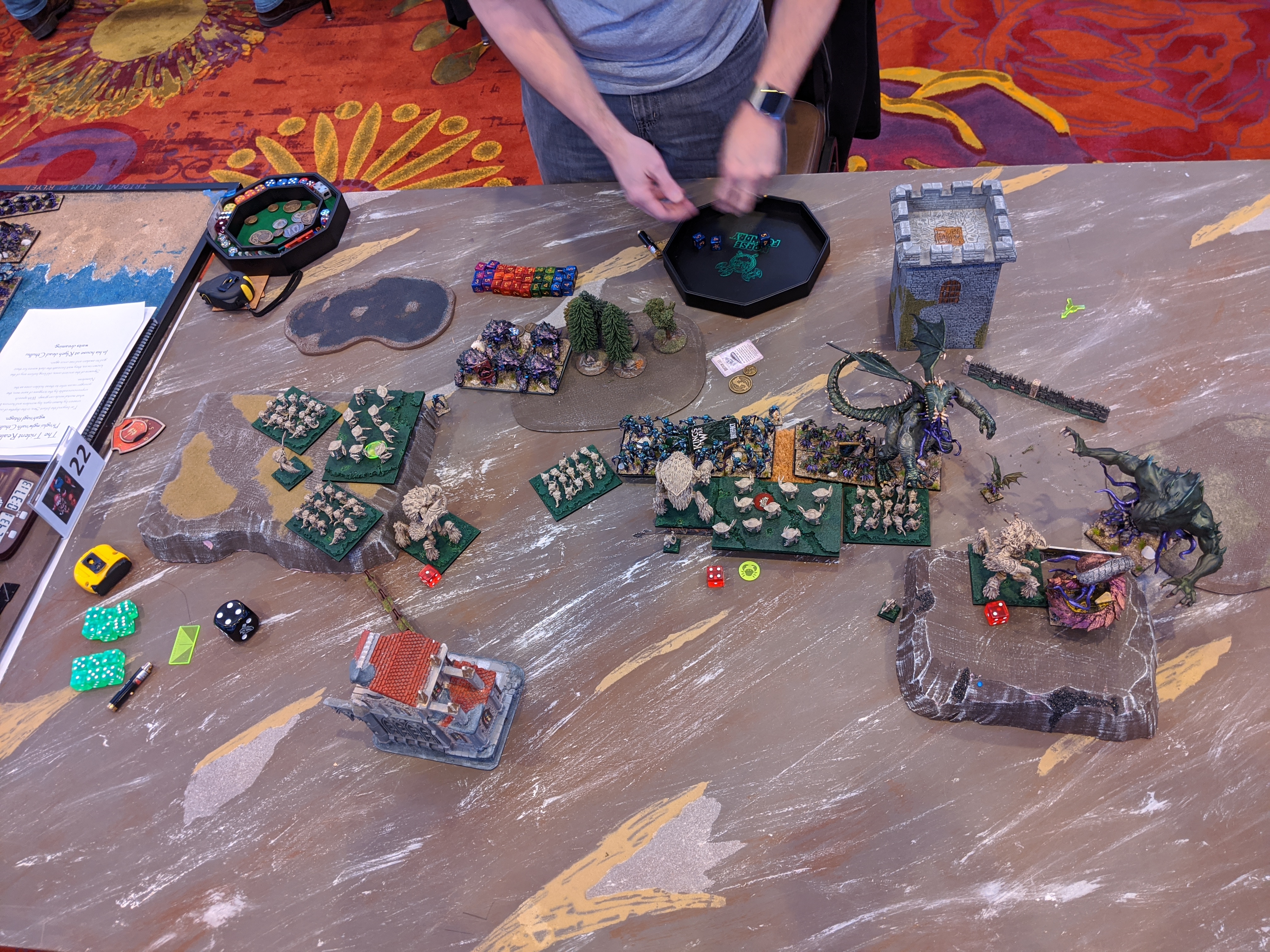 Gribble Realms options are dwindling, but there’s still mayhem to be had. Ensnarers counter-charge the central Kraken, Cthulhu + Thuul thunder into some poor Heartpiercers, and the right Kraken facetanks a Kraken + Knucker. 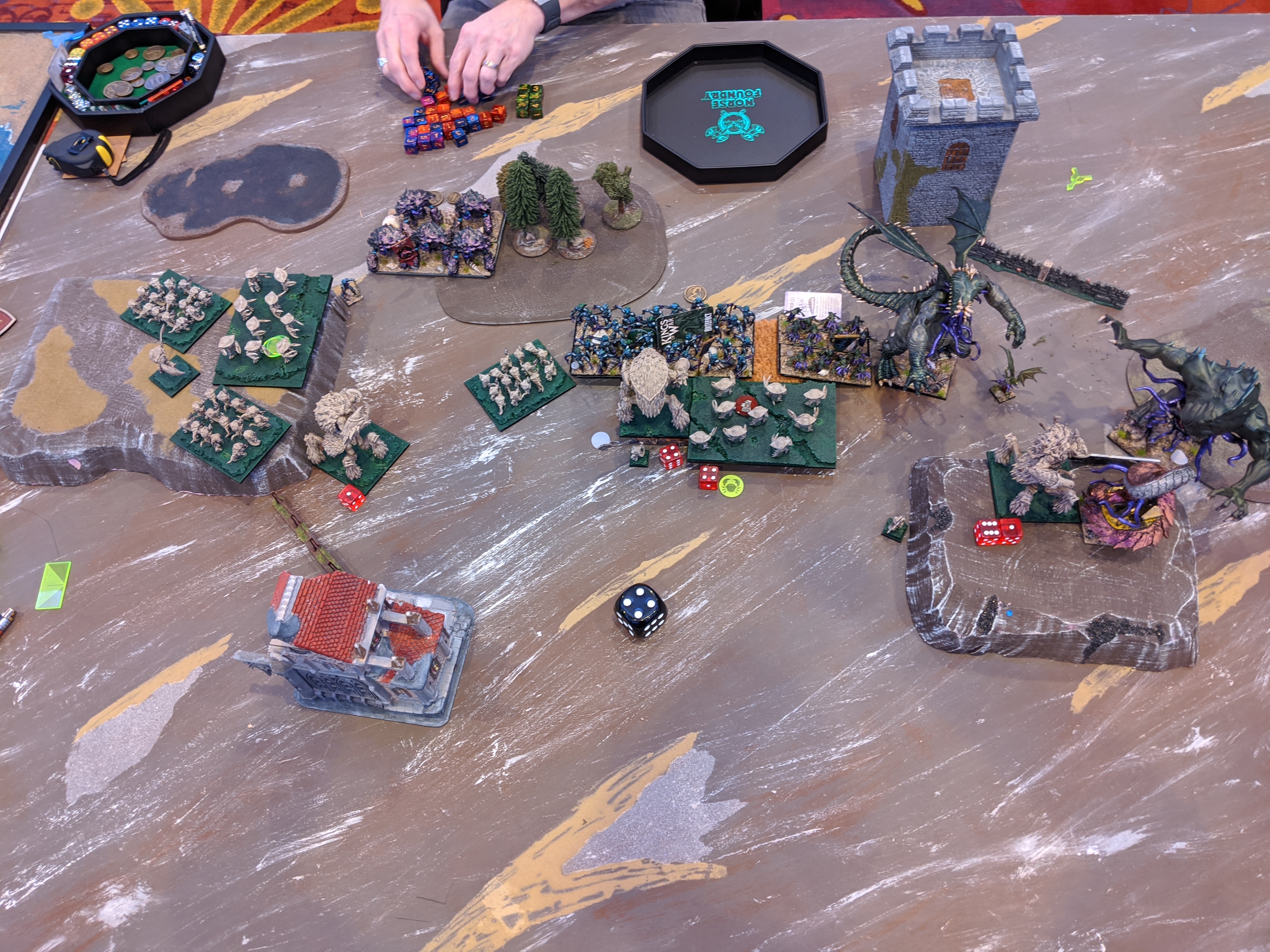 Those Heartpiercers turn to jelly, but otherwise Kraken hold like the towering anvils they are. 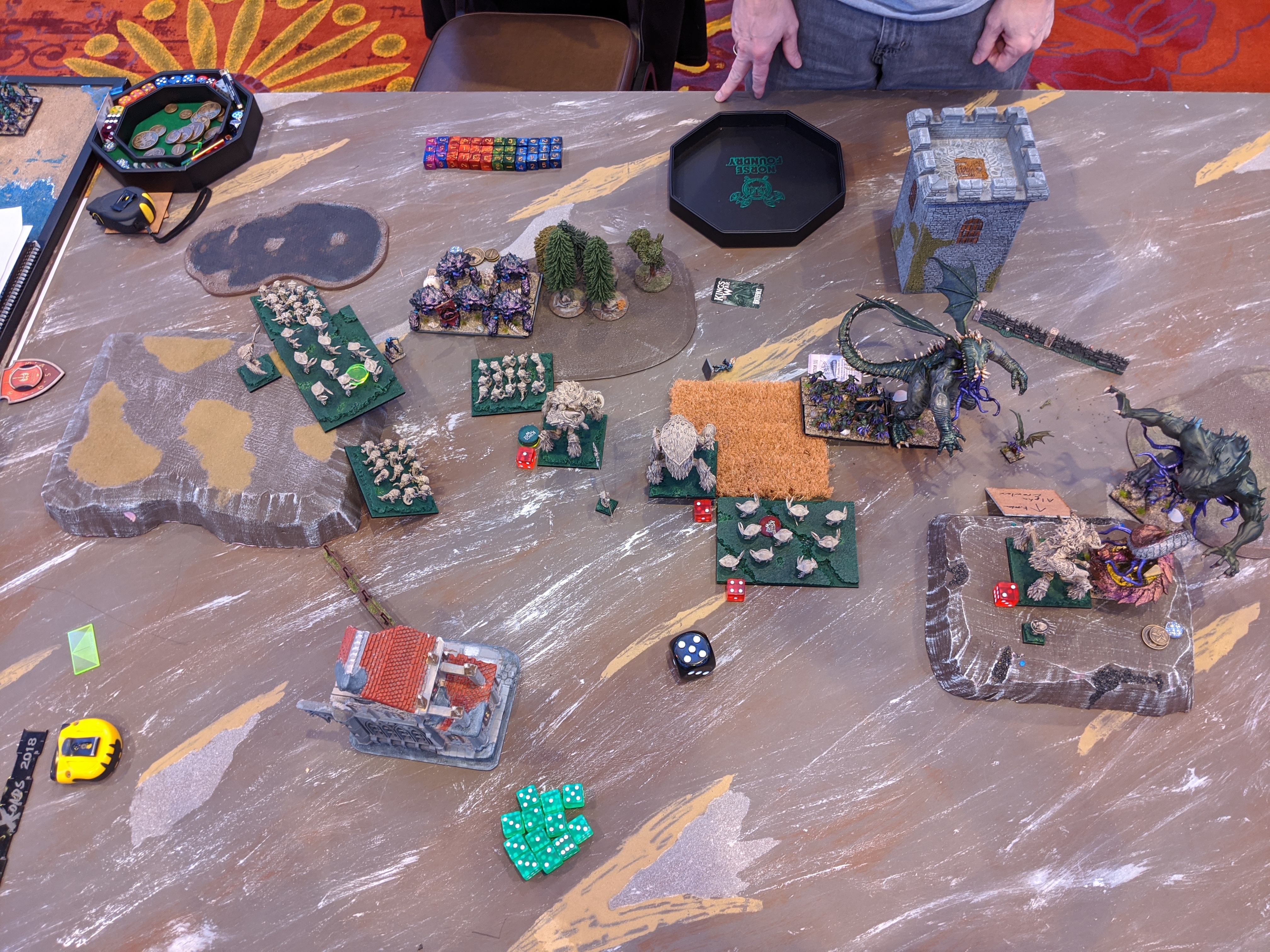 Scuttlin’ Turn 5, check out that big horde-sized hole … Gigas + Kraken in the front and another titan in the flank splatters the Ensnarer horde, and leaves one Kraken loaded up with 4 (!) tokens. My other Kraken swings into the Knucker, because at least it can’t regen? But he wavers it anyway! Beast.

In non-Kraken news, the central Gigas back up 3” after combat but can’t escape Lord Cthulhu … And my other Gigas charge and dismember an Envoy, shortly after 30 Heartpiercer rounds waver his Gigas again. Man, I hate when my Gigas waver too. 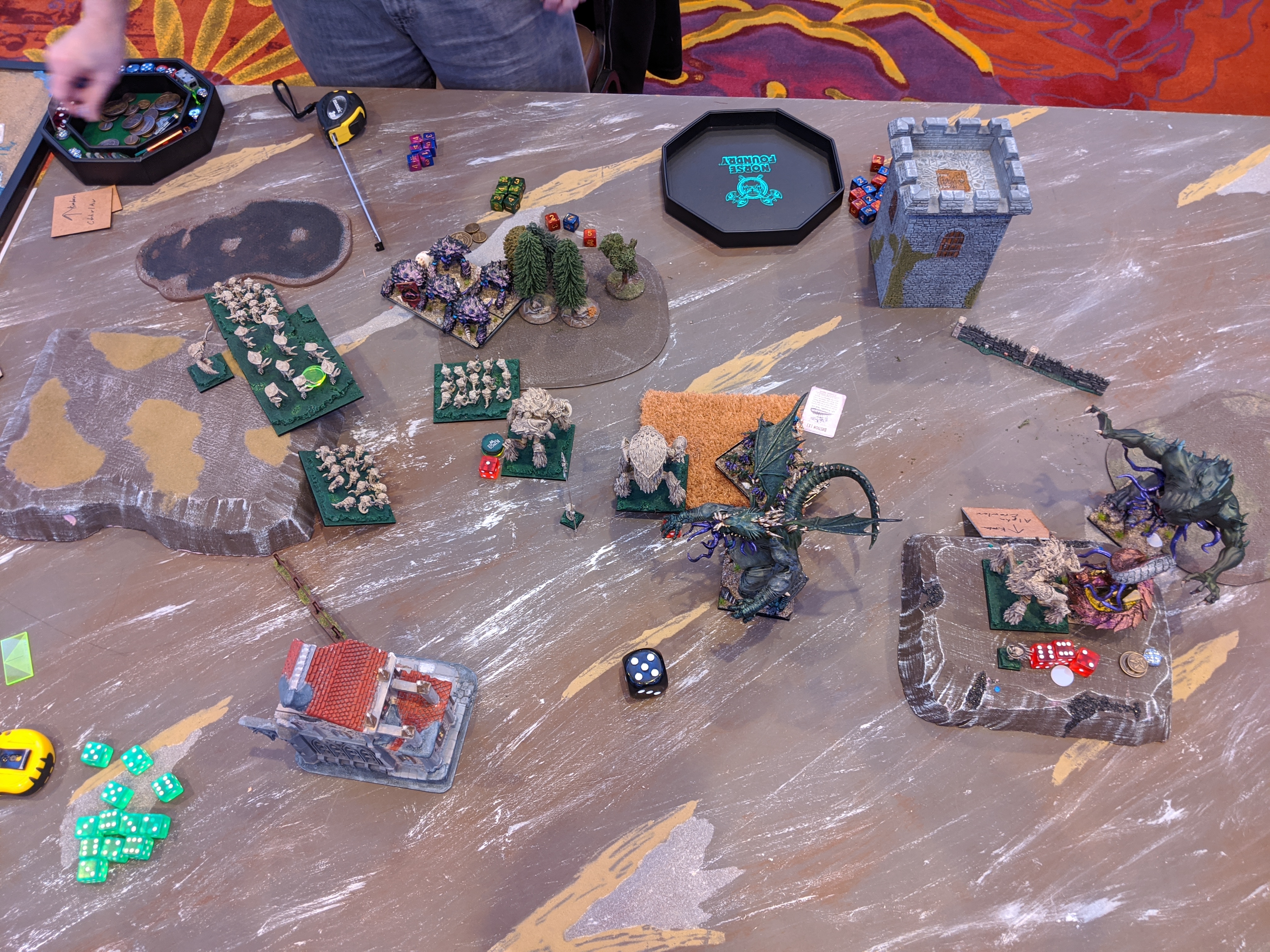 Kraken violence continues, as my central Gigas are charged by Thuul and flanked by Cthulhu, and my beleaguered right Kraken is flanked by his other Kraken. While the Gigas crunch beneath Cthulhu’s feet (who scoops up their token), my Kraken survives on 14 damage! Wavered but still holding, which was his only goal this game. Also his Gigas rotate to face their destructor. 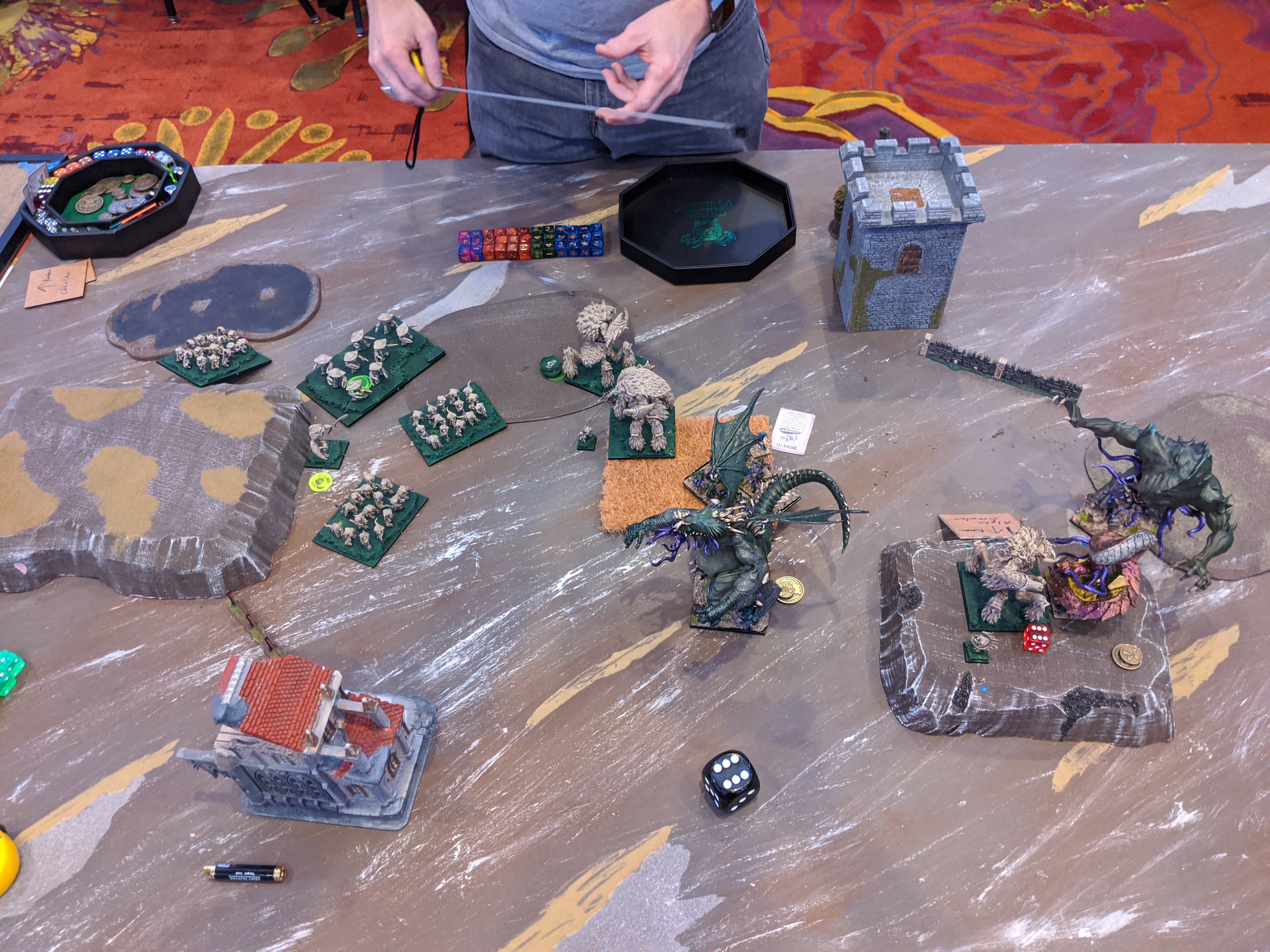 Scuttlin’ Turn 6, scenario time go! The Kraken carting around 4 tokens plows into the enemy half, while the other central Kraken gets out of LOS but prepares to punish if there’s a Turn 7. My right Kraken furiously regenerates 8 damage and keeps looking at the Knucker in a show of disrespect for his Kraken. Then Heartpiercers pincushion Cthulhu but he cares not for their barbs. 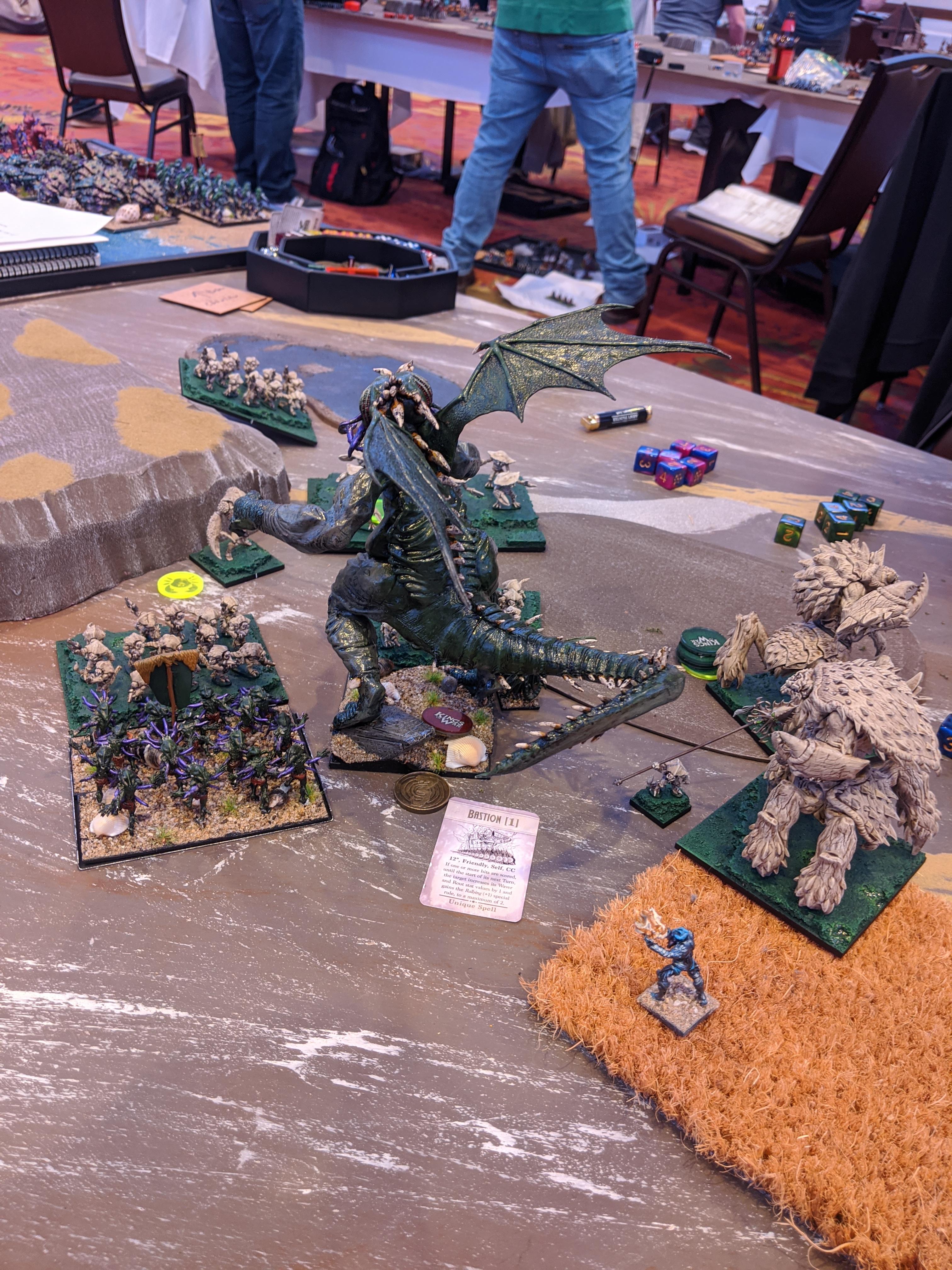 In what would be the end of the game, Cthulhu and his Thuul minions pounded into some Hearpiercers but honestly I think they held. I don’t have a shot of it, however I think my hero Kraken on the right finally ate it. (KRAKEN COUNT = 4)

BUT with so many tokens on his half (5!) this was a pretty serious win for the Scultting Realm. The flanks he offered up in Turn 4 certainly helped, but I’mma give credit to my right Kraken holding up his own titanic flank for FAR longer than he ought to have. I was far more patient than I usually am – I mean, not in that middle combat I guess, tho it wasn’t massively risky – and his delay really gave me the time I needed to wreck the flank and center.