The US Masters tournament for the 2019 Kings of War season was held at Tioga Downs Casino in Western NY, just shy of three hours west of me. More awesomely, there was a side tournament held at the same time in the same room, conveniently called The Best of the Rest. It followed the same rules, points values and scenarios, but blessedly was only five games and not the grueling six of the Masters.

While I very much didn’t fancy my chances, I felt I owed it to the crabs to give them at least one more event before packing them away for the inevitable Clash of Kings buffs at the end of the year (Wyrmriders, I’m looking at you guys!) This also meant I would finish painting more of the army’s stockpile instead of, you know, never getting back to it. 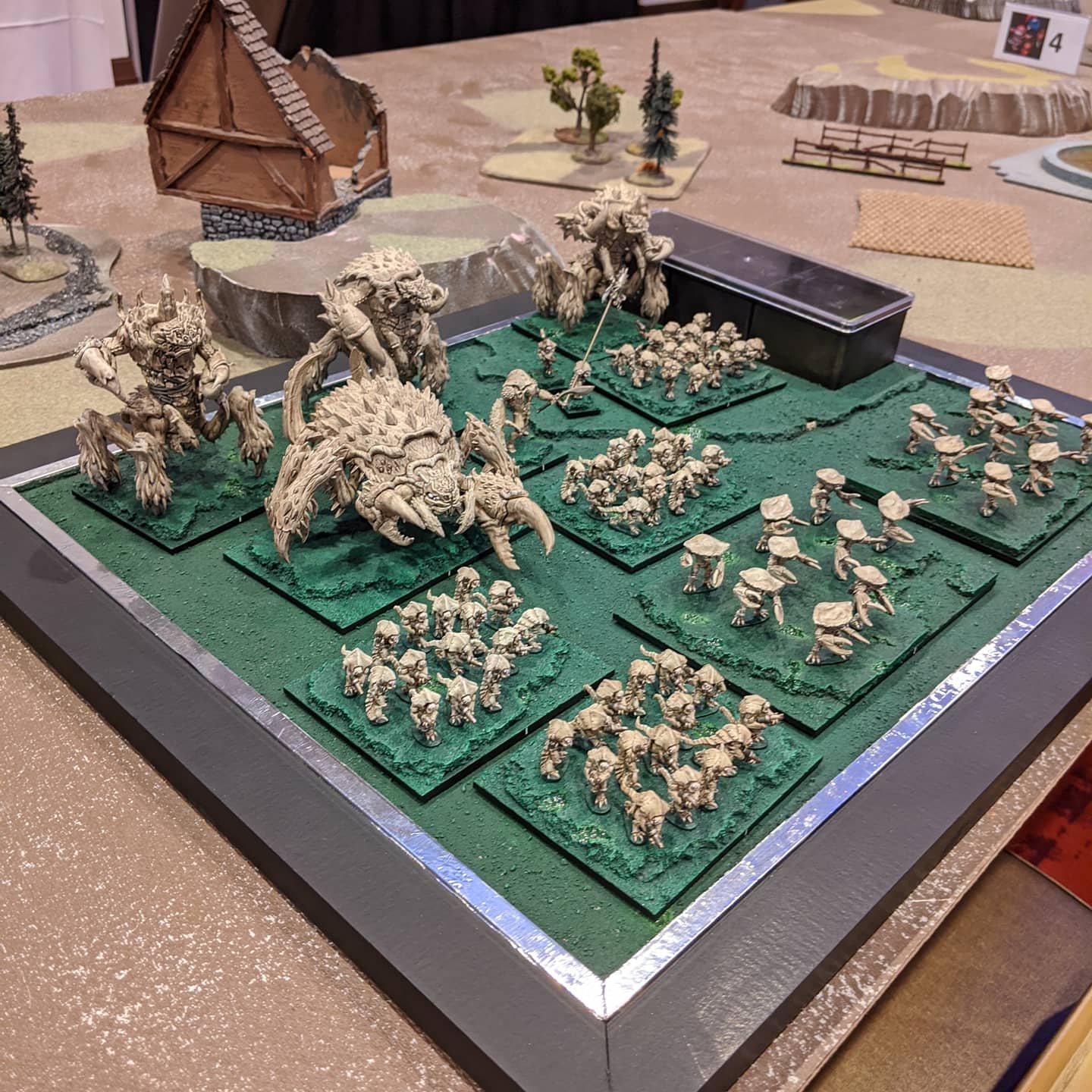 Despite proving scientifically that Kraken are speedy yet pillowfisted pseudo-anvils (aka not hammers), I still wanted to bring all three of the big guys, particularly as I had just finished painting their big little brother, the Deep Crab from Mierce (the Kraken are Mierce’s three Scuttling Nucránca). At some point in my testing I abandoned trying to make Wyrmriders work and had switched to a Water Elemental horde for my unlocks and facebeating purposes. It’s sad when 18 CS1 attaks is your hammer but, well, Trident are like that. Also being natively Def 5+ and Strider (and Regen 5+) are groovy things, as well as putting him roughly in line with the Kraken’s abilities, which is aesthetically nice as all four minis look related.

I kept all the Heartpiercers in, since I made the army around them originally, afforded some anti-wavering tech for the Gigas (being wavered is the worst, especially when you don’t have regen or heal) and grudgingly gave the Eternal true inspiring. It’s always a bad feel to upgrade self-inspo for 20 pts but I really wanted him in there – the only two games I’d won of 3E so far had been because of him – and needed the third inspiring.

I did have a bit of regret going into these games, as a couple days before I realized that I should just give the Water Elementals brew of strength, as they were the lute target 90% of the time … and spoilers, my lute didn’t work 50% of the time. Also CS2 would just fit the model better.

Anyway, while I was sorta ok with Scuttlin’ Realm 2.0, my goal for the event was just two wins. You know, doubling my record for the new edition. 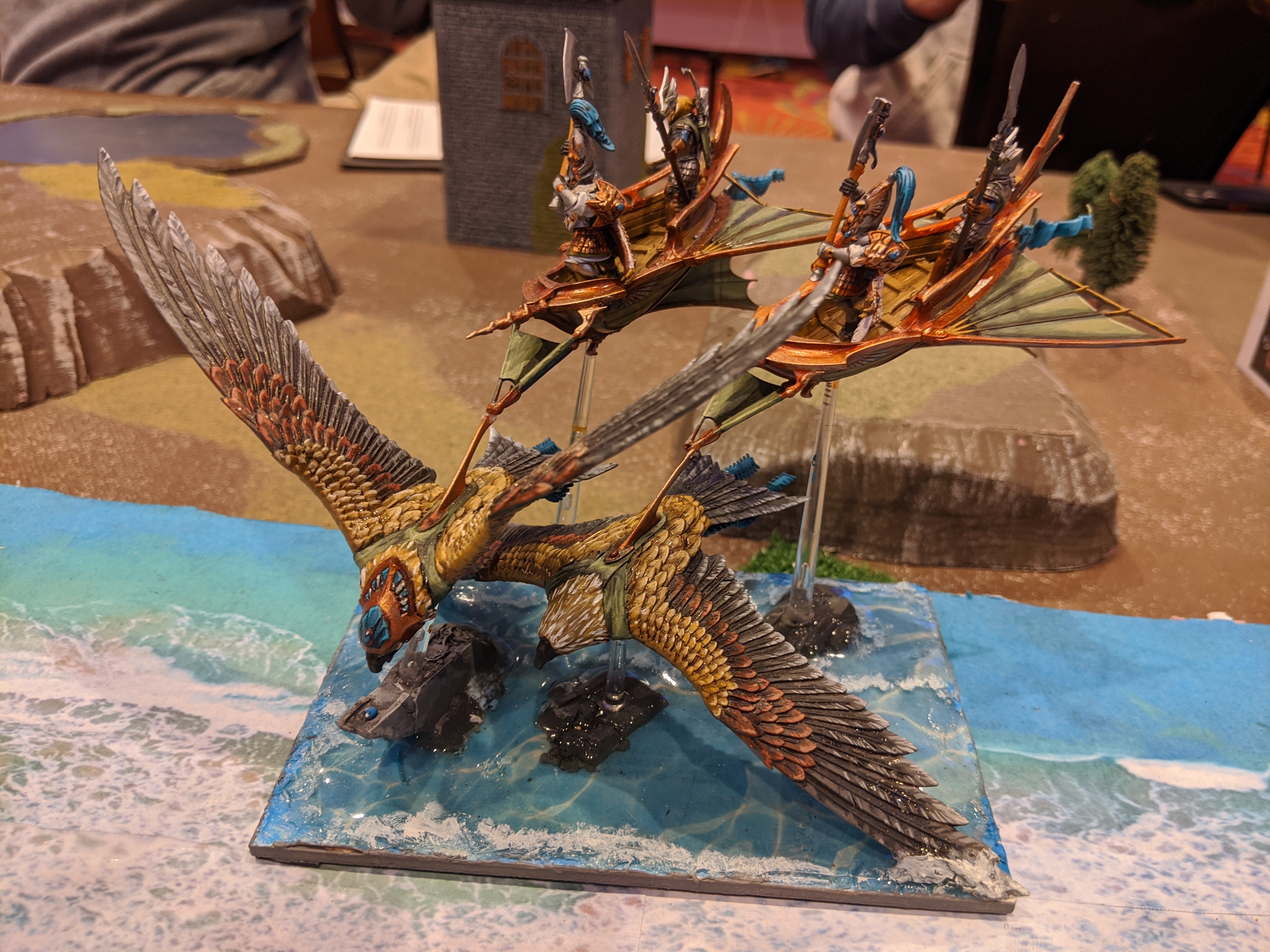 Table #1 baby! Fun fact: I watched this army play my Round 4 opponent the night before the tournament kicked off, as I liked both armies a lot. Smart list with six extremely useful flyers. I obviously didn’t realize how great Exemplar Redeemers are, very reminiscent of pegasus vamps, which are one of the flyers I respect the most in the game. Except these regen, and headstrong, and CS2, and etc.

Round 1 was Dominate, and the Scuttlers kicked things off. Grudgingly. 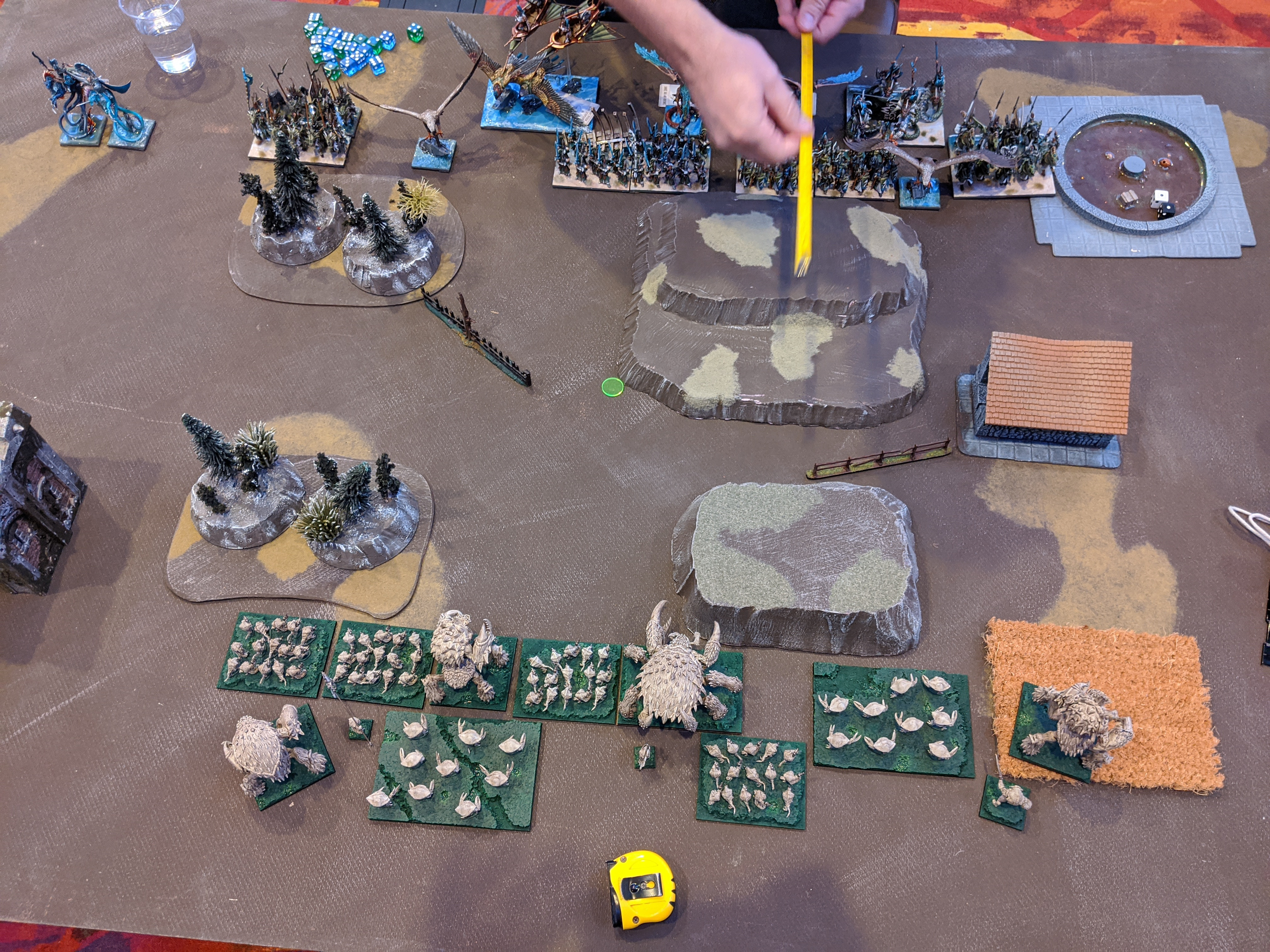 Battlelines! Most relevant notes are the Redeemers stacked on the left flank and the ultra-hammer Order of the Redemption in the second wave on the right flank. 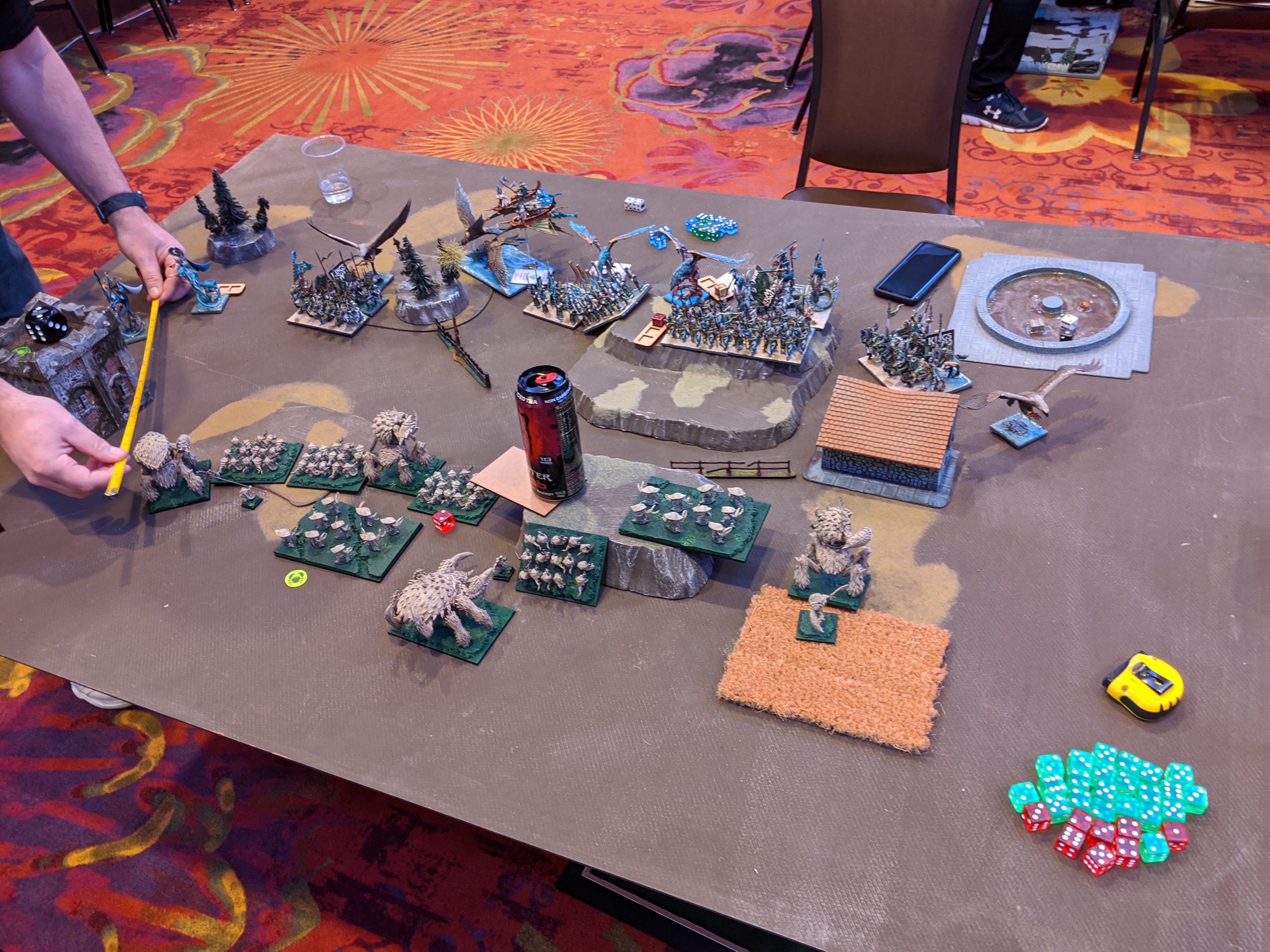 Headed into Order Turn 2. Turn 1 I must have advanced, without being able to shoot my 18” guns, then he advanced, lightninged some Heartpiercers, who regened and returned fire at the offending Unicorn. Worth noting that my dice were ice cold at this point and my brain extremely fuzzy from no sleep / being out of practice (I mean, check out that 10AM Monster :X) 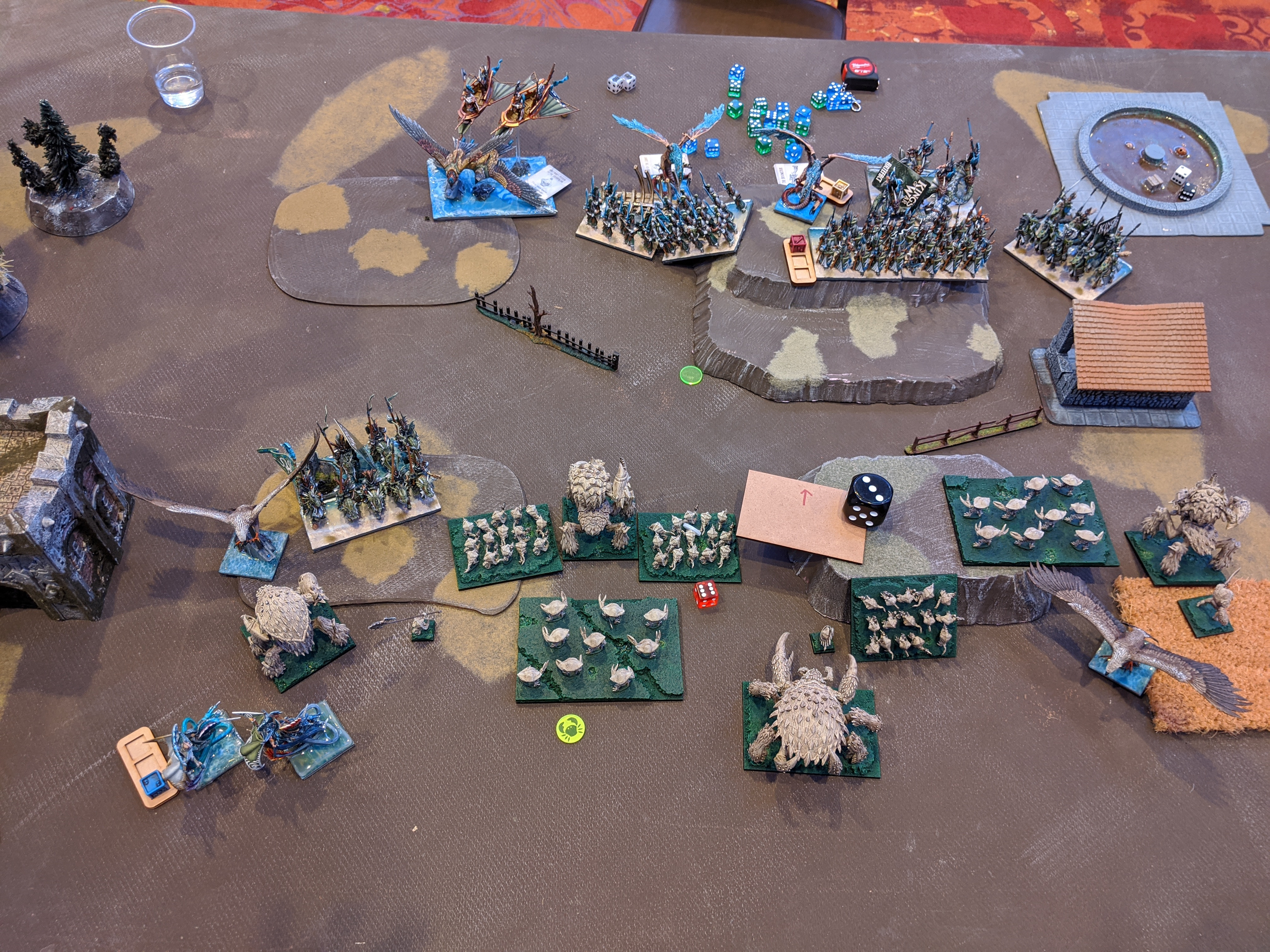 Despite leaving a Kraken over there to intercept one of them, both Redeemers are able to hop my lines. I am well and truly fakked. (The TO walked by at this point, watched the heroes fly over the Kraken, looked at me and shook his head …) Some Brotherhood knights run over some Heartpiercers while the Unicorn zzaps that other unit more, wavering them. Pegasus either try to get in the way or prepare to later. 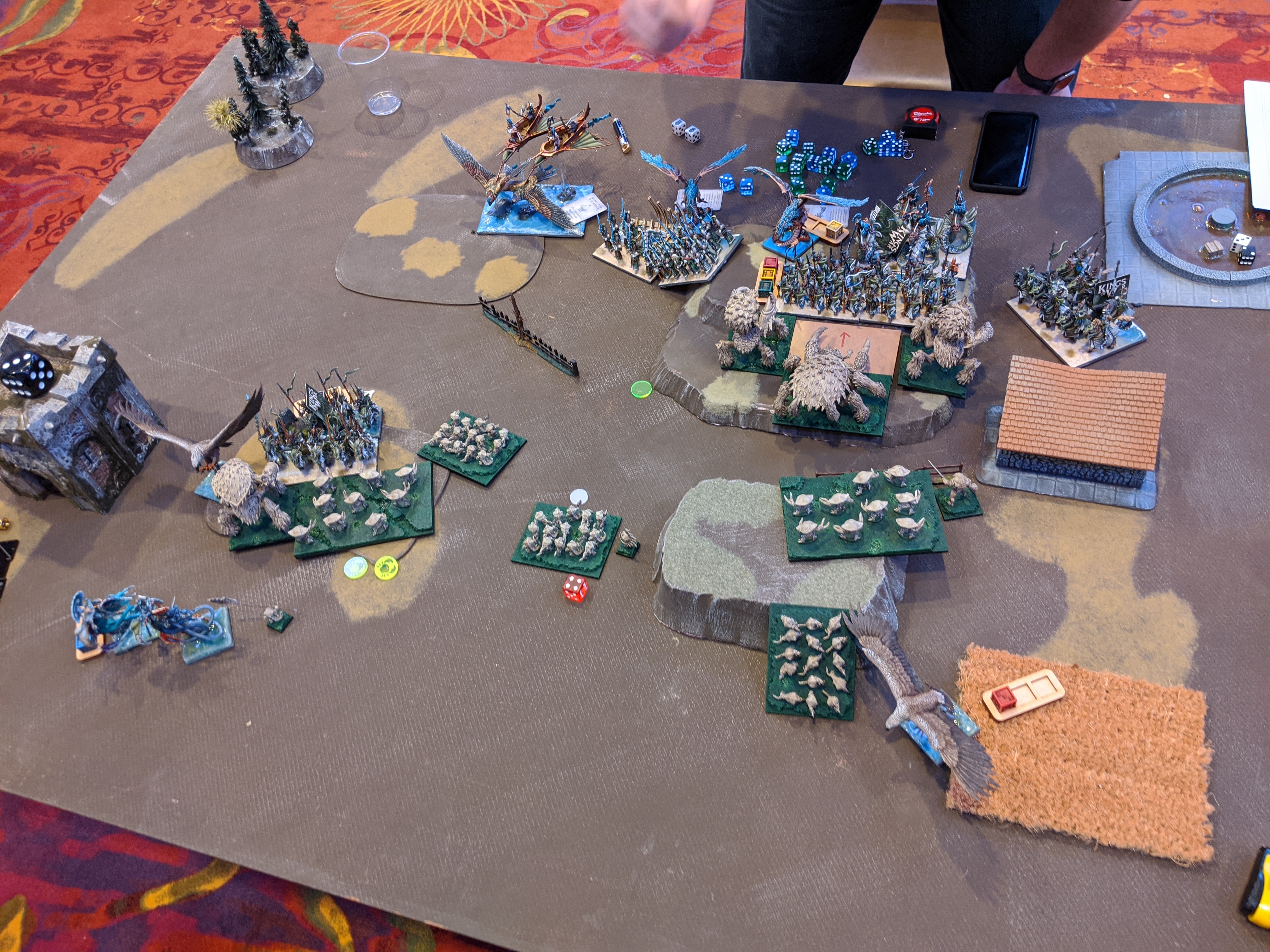 As it turns out, the Kraken is able to get into those rampaging Brotherhood, and combo-charges with some luted-up Gigas. Since this game has already gone sideways, I go hyper-aggressive on the right, sending 42 CS1-2 attaks into the Men-at-Arms. I know it’ll cost me the right Kraken but I want to break up his lines and start grinding. Heartpiercers pump rounds into the same Unicorn and the right Pegasus, for minimal results.

Both combats fail, despite the odds being in my favor / the best this army can muster. The knights may have wavered (then headstronged out of it) but the Men-at-Arms I couldn’t manage the rerolled rout. Bad times ahead. 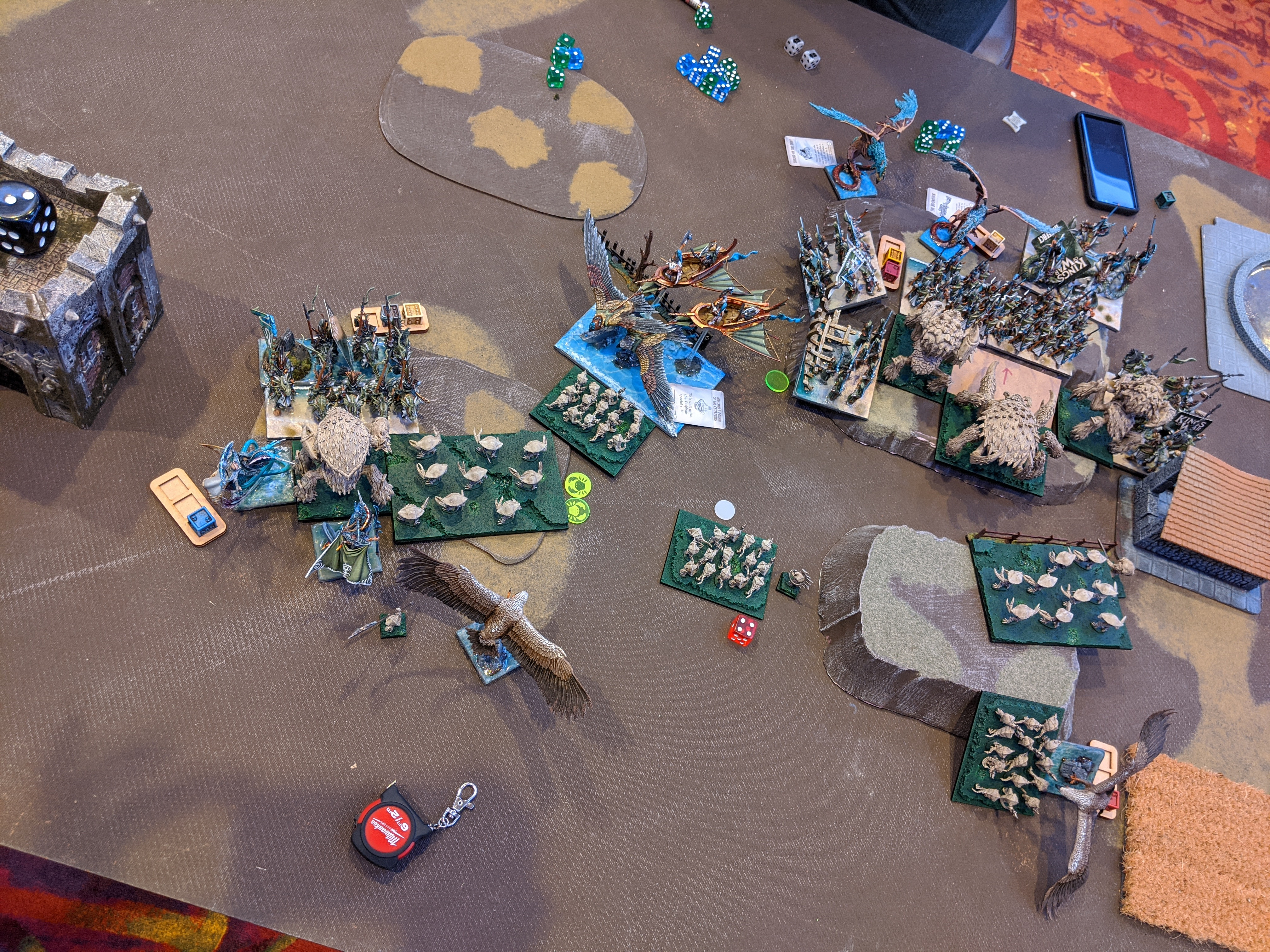 The Order responds by jumping on all three Kraken: Brotherhood knights + flank Redeemer + rear Redeemer on the left, both Men-at-Arms in the center (including an ensnare-free flank), and more Brotherhood knights into a flank on the right. Heartpiercers are plowed into by Forsaken and Pegasus, while lightning wavers the central unit a second time. If there’s a silver lining, it’s that the Men-at-Arms holding has blocked the Order of the Redemption from descending.

After combat, all three Kraken drop in one turn!! But, uh, the Heartpiercers hold.

In Scuttler Turn 4, those left Gigas finish off the Brotherhood knights and turn to face the Redeemers, knowing they’re about to go rear charge somebody. The engaged Heartpiercers counter-charge, grounding the Forsaken (!) and killing the right Pegasus (!!). The free unit shoots the wounded Forsaken, praying for that waver. Finally, the Water Elementals swing at the Men-at-Arms again, who have been very healed at this point, and the right Gigas chunk some damage into the other Men-at-Arms, knowing they’re dead soon. 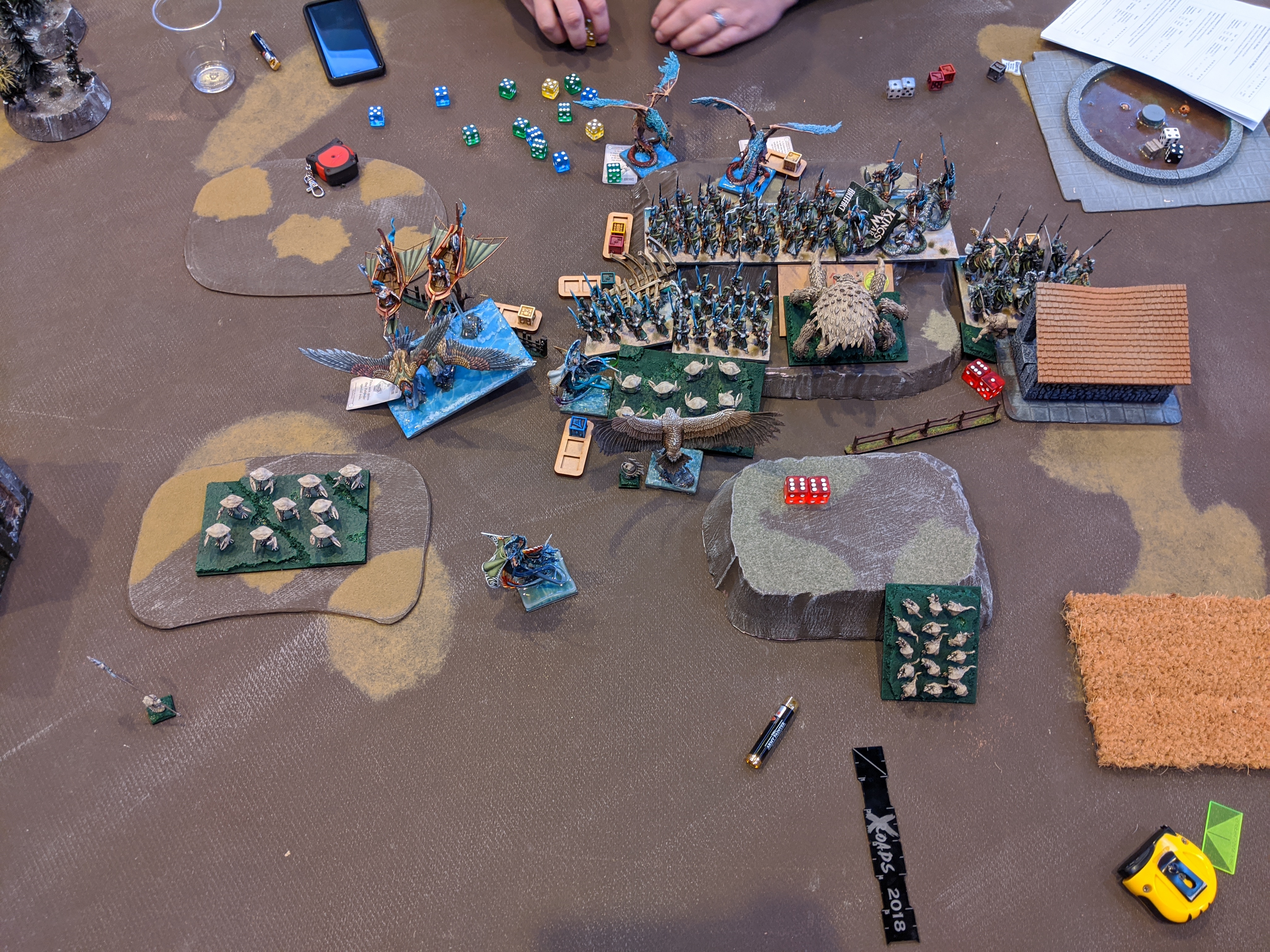 This is midway through combat in Order Turn 4. The Forsaken drop their Heartpiercers, that Redeemer in the center has just murdered some other Heartpiercers, the Water Elemental horde is vaporized by the Order of the Redemption (and a few relevant wounds from the infantry horde), but somehow the Gigas hold Men-at-Arms to the front, Redeemer to the flank and Pegasus to the rear! You can also see the Eternal on the right flank had snuck a flank charge on those Brotherhood knights, then was counter-charged here for really a lot of damage on 4+ then 3+. 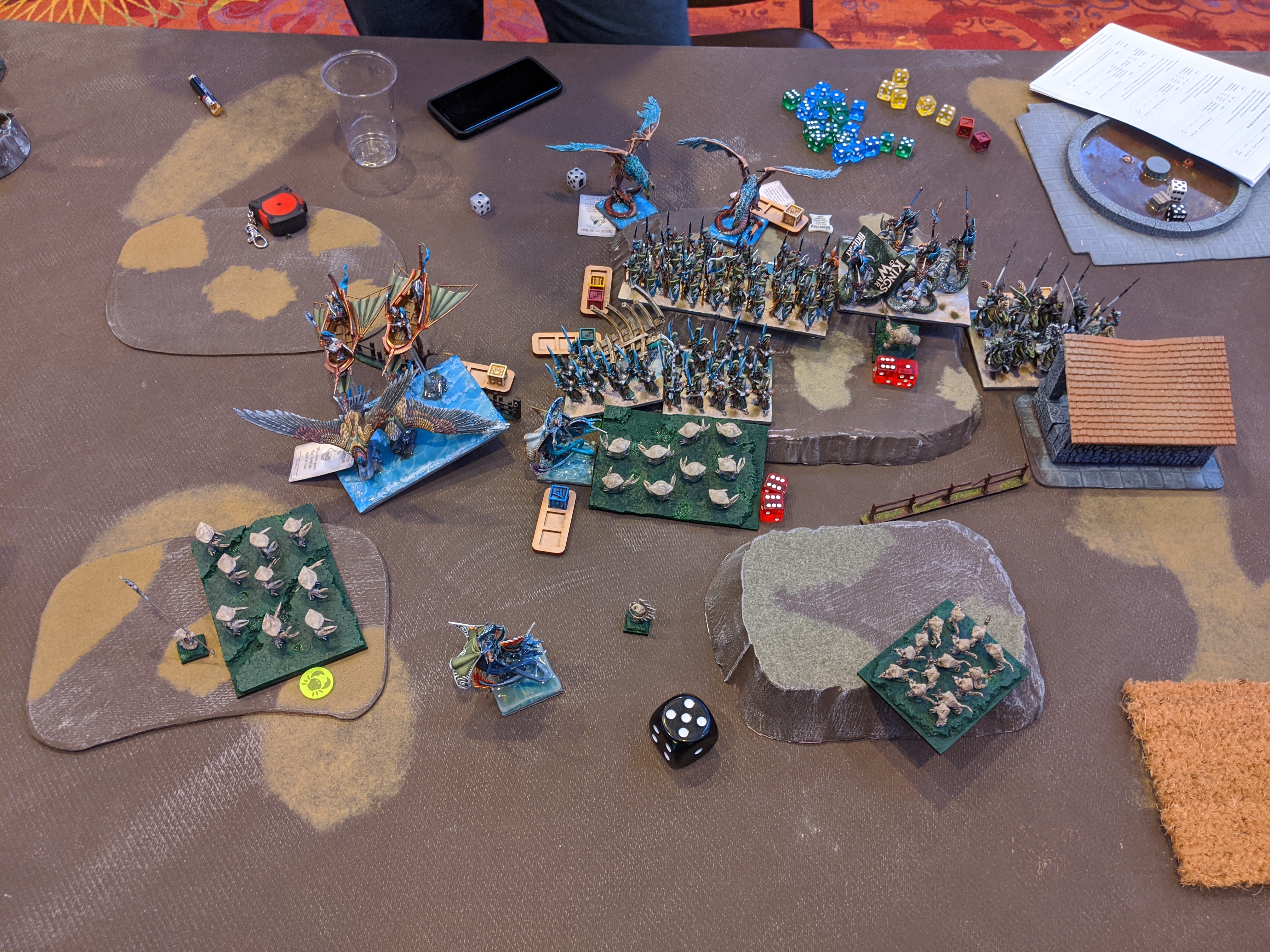 Scuttler Turn 5, the Gigas turn around and eat the Pegasus in their rear, then turn back around. The Eternal nimblers out and hacks into the Order of the Redemption. And the remaining Heartpiercers try to finish off a wounded flyer (probably the Forsaken in the Gigas’ flank). 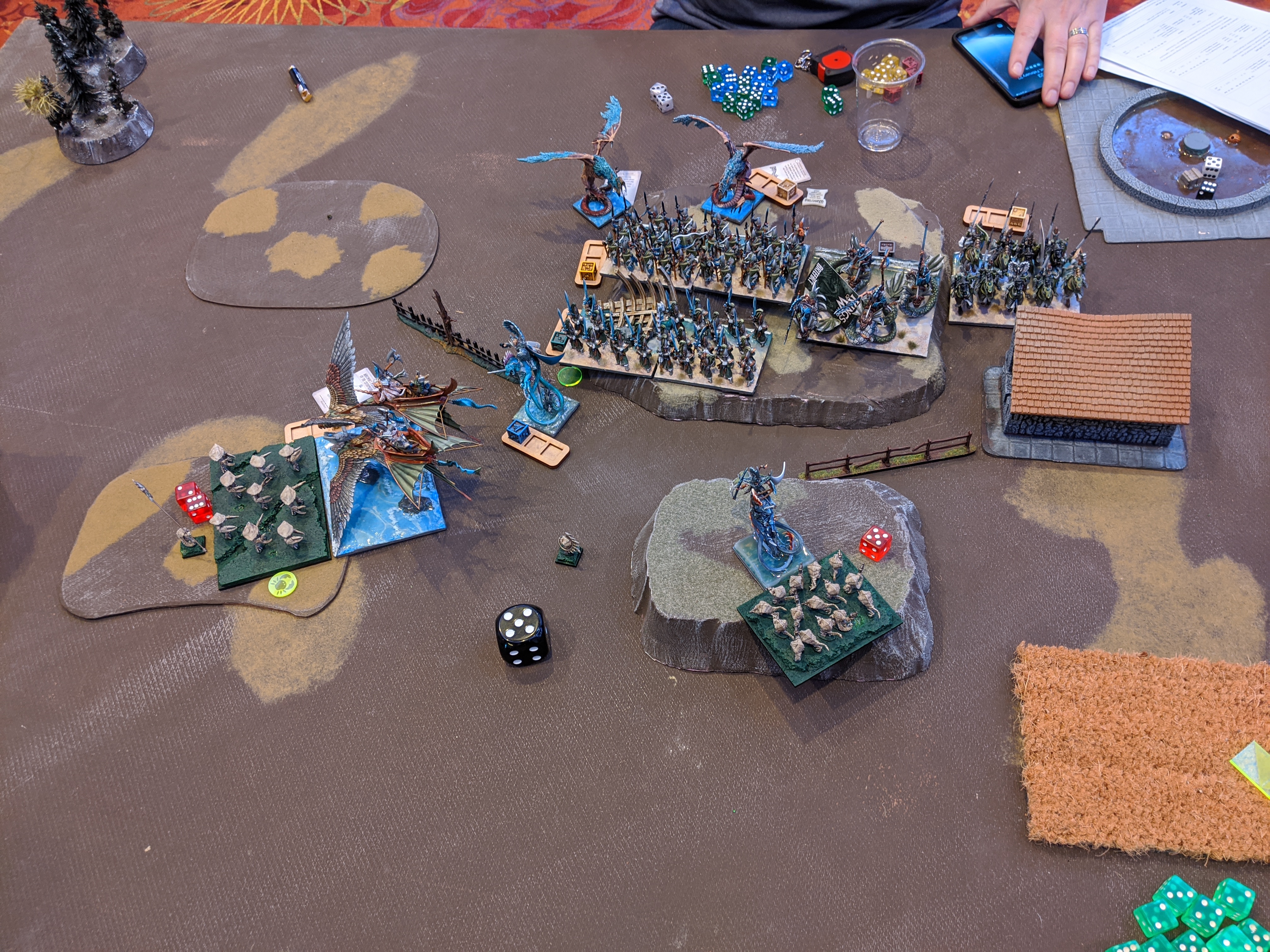 The central Gigas are torn apart, while the other Gigas hold a Forsaken charge and the Heartpiercers likewise repulse the fresh Redeemer. The Eternal is shredded by the Order of the Forsaken, while Unicorns rapidly heal the damage to the Men-at-Arms. 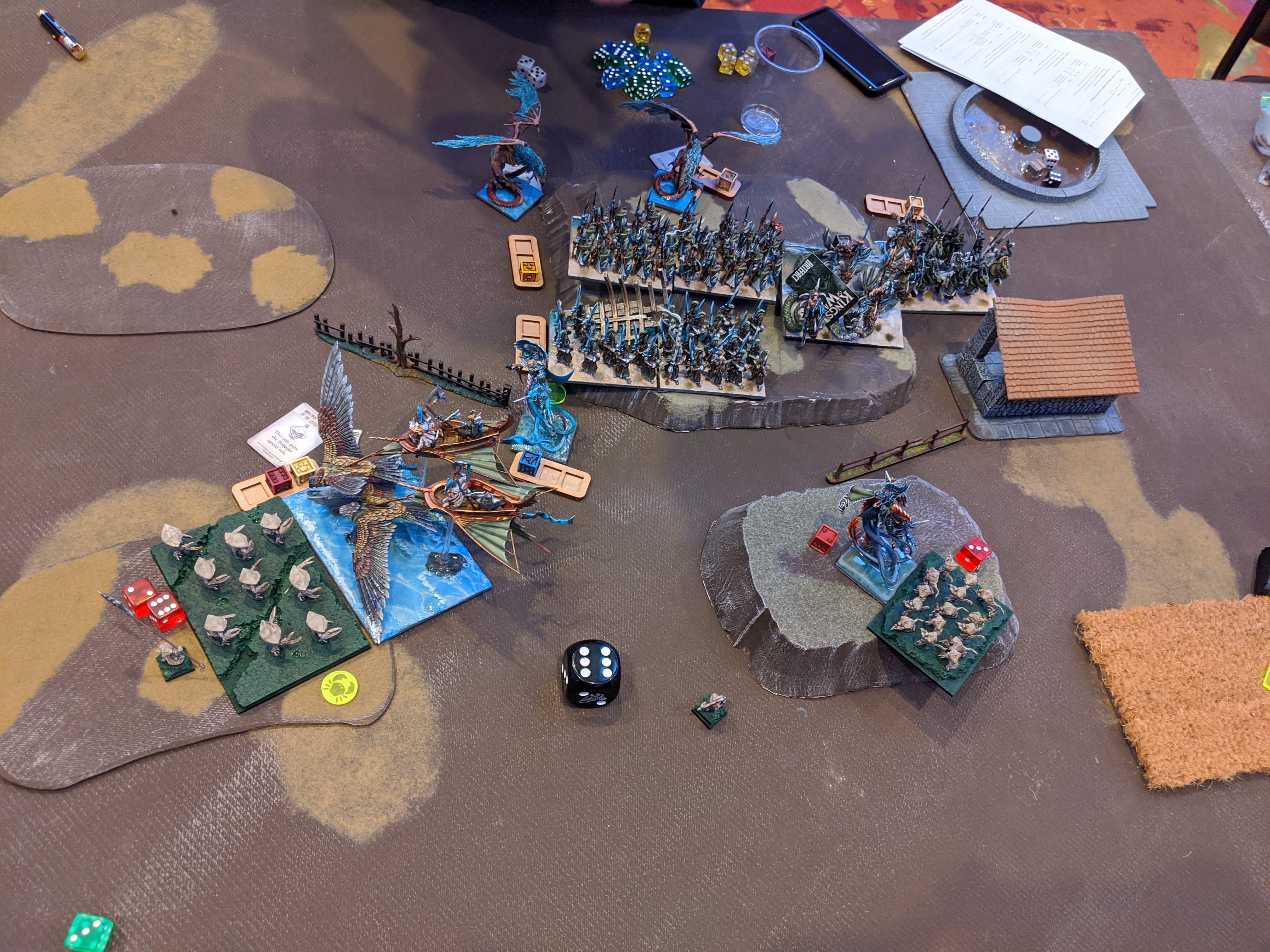 Turn 6 and I’m desperately trying to kill something else. The Gigas swing like champs but botch the rout roll on the Forsaken, while the Heartpiercers cutely slap two wounds on their Redeemer but whatever. 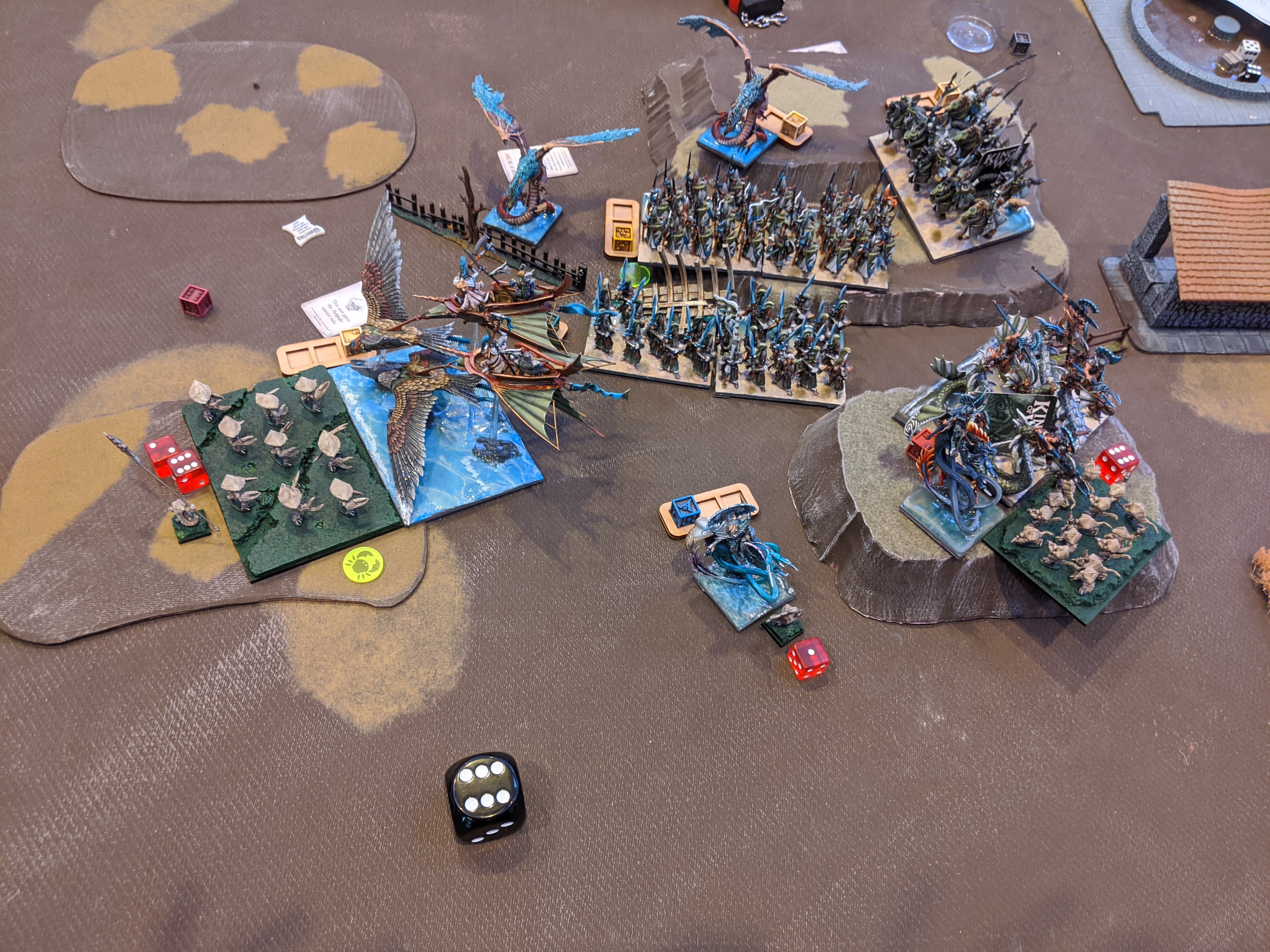 Those offending Heartpiercers are cratered by the Order of the Redemption, and I’m pretty sure the Gigas were torn down with excellent dice from the Forsaken. I end the game with just the Envoys kicking.

Amazingly I was able to kill enough to earn 1 point! Oh right: we’re playing Blackjack, which uses 14/7 for wins/loses and then modifies that based on how well you won the scenario, and then further by attrition difference.

Given all those flyers and how poorly my list handles them – if it’s a single dragon, I can just shoot it to death, but multiple smaller fliers is really difficult – I kind of felt the outcome was inevitable. Having those early combats where I applied fairly overwhelming force just peter out was sad, but my dice weren’t there for me, plus Trident simply don’t have the combat power to make any match up a sure thing.

This army would go on to win Player’s Choice, and the dude was a pleasure to finally face after seeing him around for years.

Up Next: Trident Realm Civil War