It’s the final round of the GT and I’m 2-2 and firmly on a lower-middle table. Sounds about right, and I’ve already accomplished my goal of two wins, so however this rampage ends I’m content. Up against EOD for the first time in 3E, helmed by a dude I’ve seen around for a while now but never played.

The EOD general was pretty down on most of his units who aren’t being repped by a towering bronze statue of Set (obviously Shobik!), however I still rate Enslaved Guardians (Me 3+!) and have distinct memories of being rocked by Bone Giants and struggling to pound through Mummies fast enough in 2E. Also I’m really bad at accounting for Caskets, and they’re everywhere here.

Aside: This game really showed how badly we’ve missed EasyArmy, as both he and I were misremembering EOD stats left and right, and had to keep going back to the giant 3E hardback to double check things. Really the worst.

Found 5 was Raze. Scuttlin’ Realms go first, not by choice. 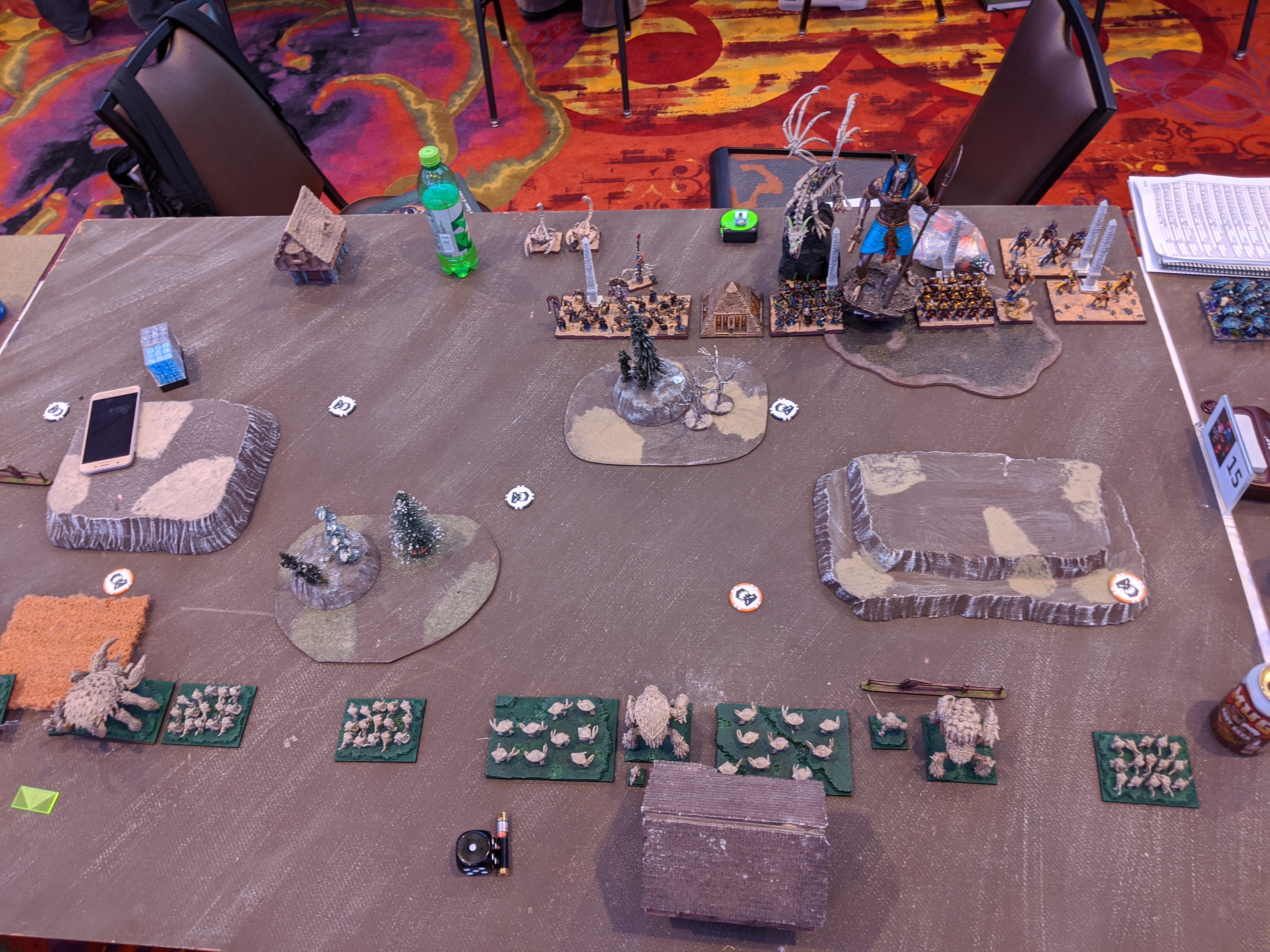 Battlelines! Scorpions are Catapults, pyramid is the Monolith, other stuff is pretty clear. 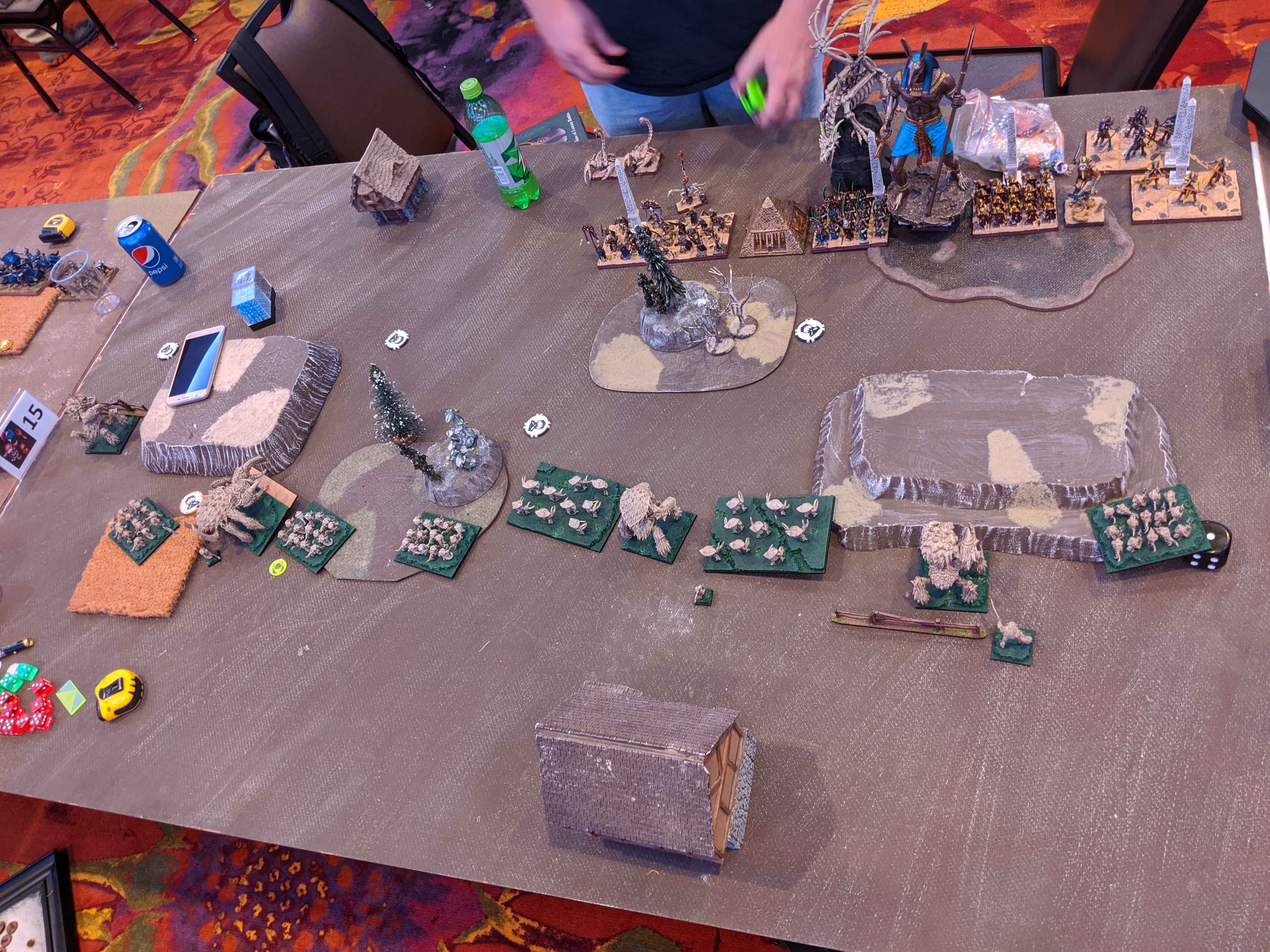 Scuttlin’ Turn 1 sees the stranded left flank push as hard as it can through difficult terrain / shambling, and the right flank kinda chill out. You know, get some shooting in first. 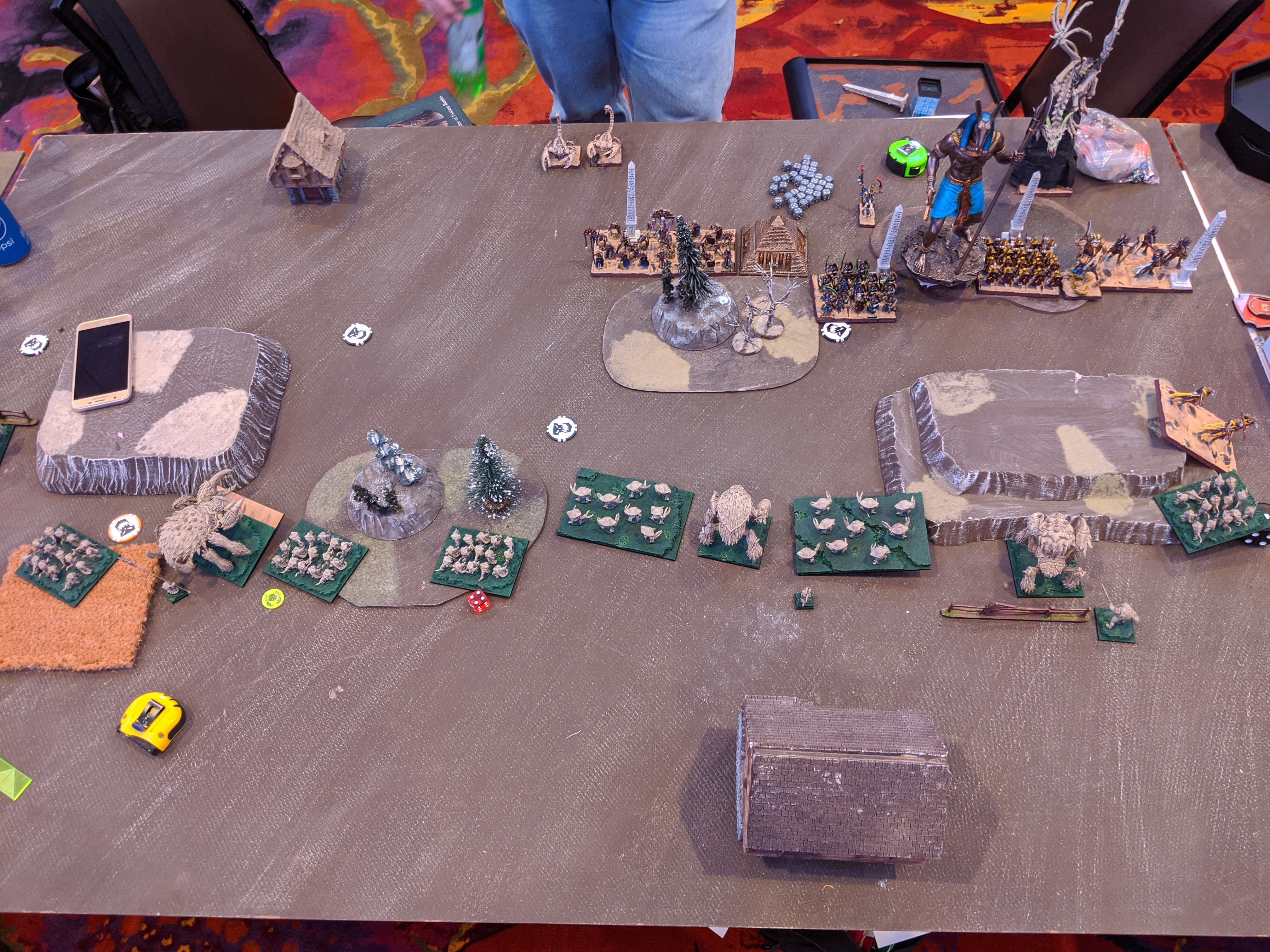 The Empire doesn’t do a ton of moving in response, but a horde of Enslaved Guardians is launched up the table and stops 1” short of the right Heartpiercers. Whoa. Catapults splash 4 damage into some other Heartpiercers. And suddenly I’m reminded what Undead surge is like, except with caskets and Monoliths added to the mix. 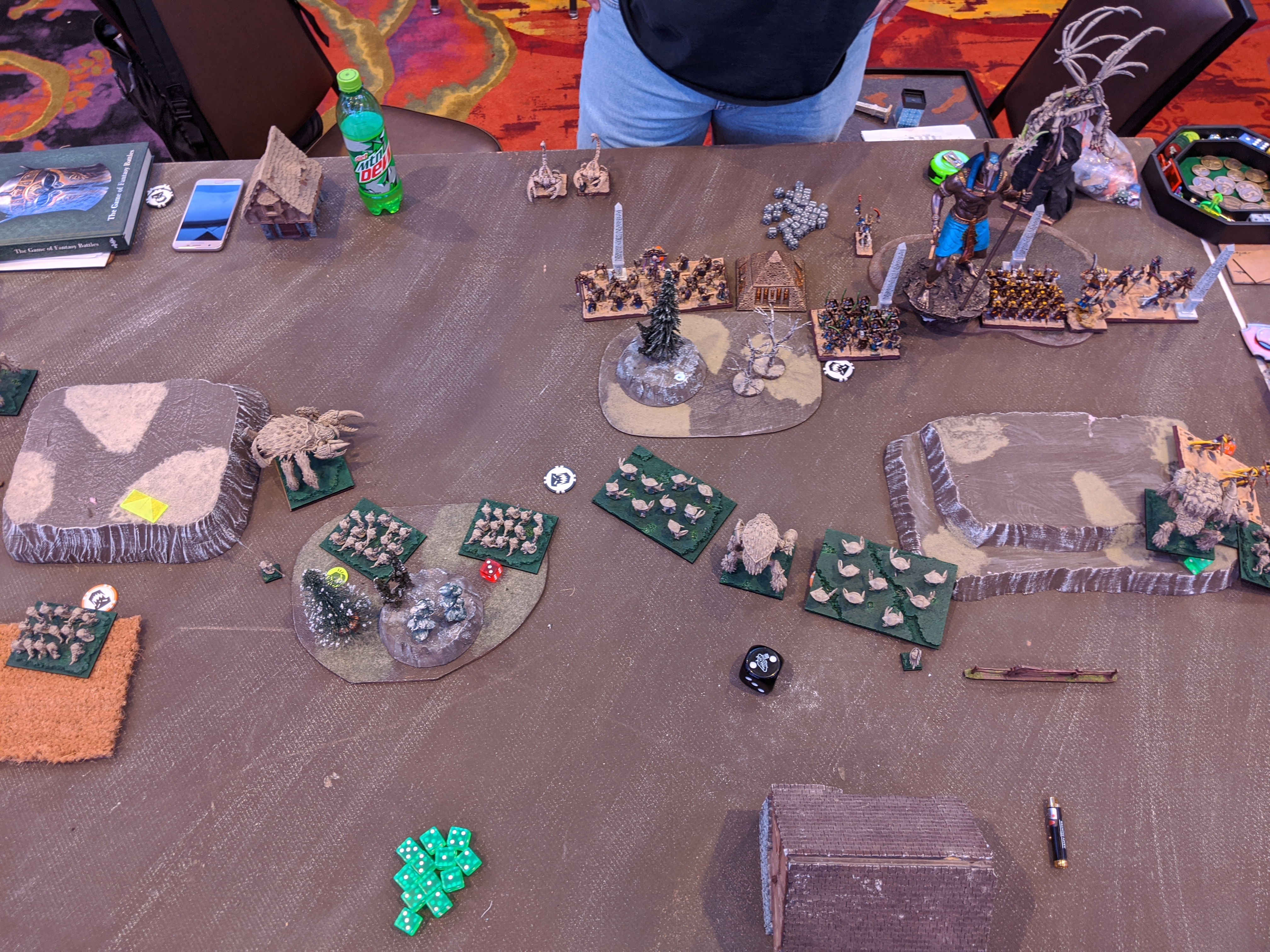 Scuttlin’ Turn 2, and I’mma need those flanking assets in here pronto, m’k? The leftmost Kraken burns a token (1:0), as does the Water Elemental horde (2:0). Central Hearpiercers begin raking the Revenant horde with harpoons while Gigas prepare to receive. But really it’s about the cccccombo charge on the right: Kraken + Depth Horror Eternal + Heartpiercers into Enslaved Guardians … for 7 damage?! It doesn’t work out 😐 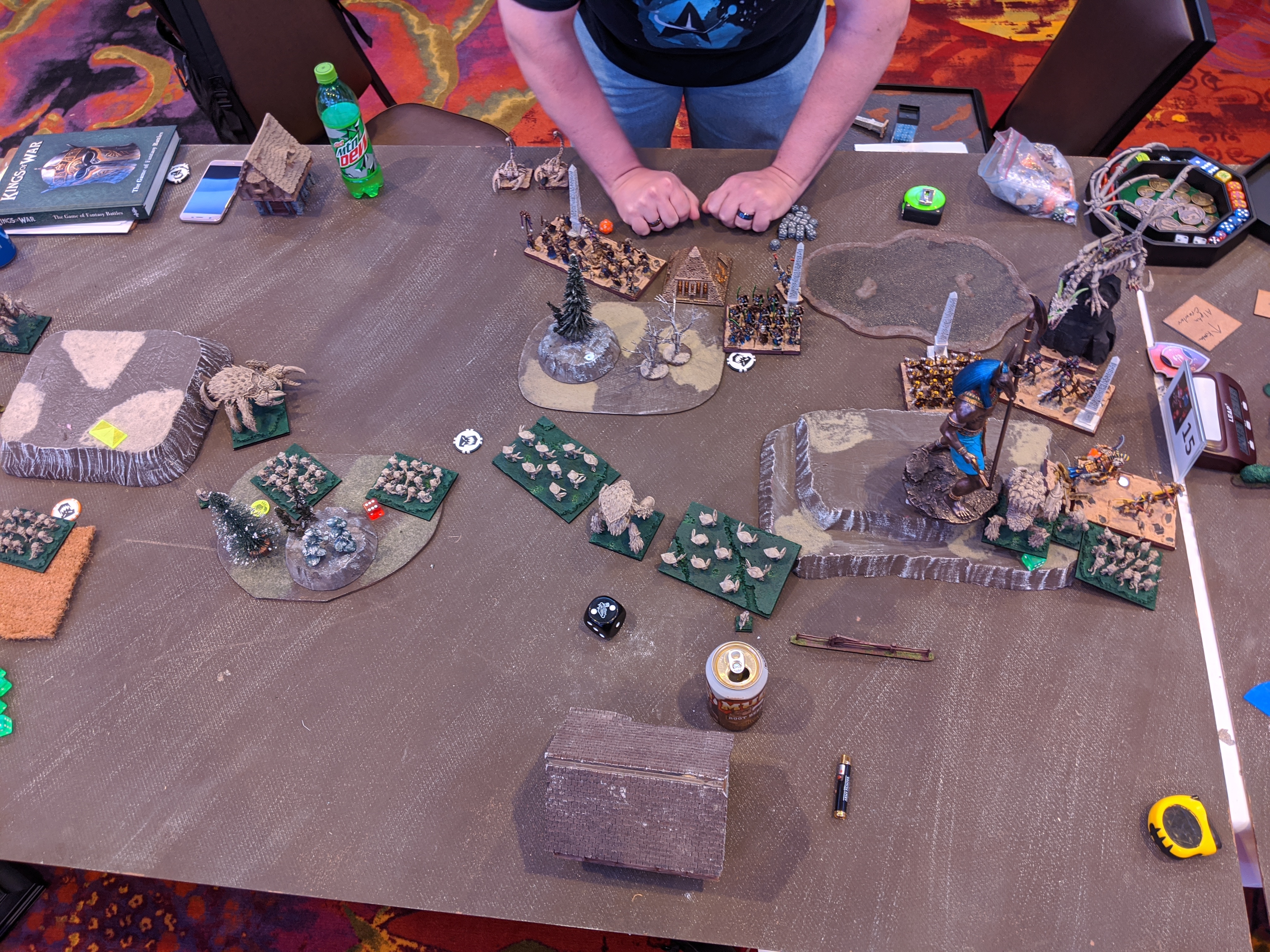 CURSE! CURRRRRSE! Guardians counter-charge the Heartpiercers, the Bone Giant thunders into the Eternal, and Shobik is surged into the flank of the Kraken. Balls. Also Catapults slap those central Heartpiercers back to 6 damage. 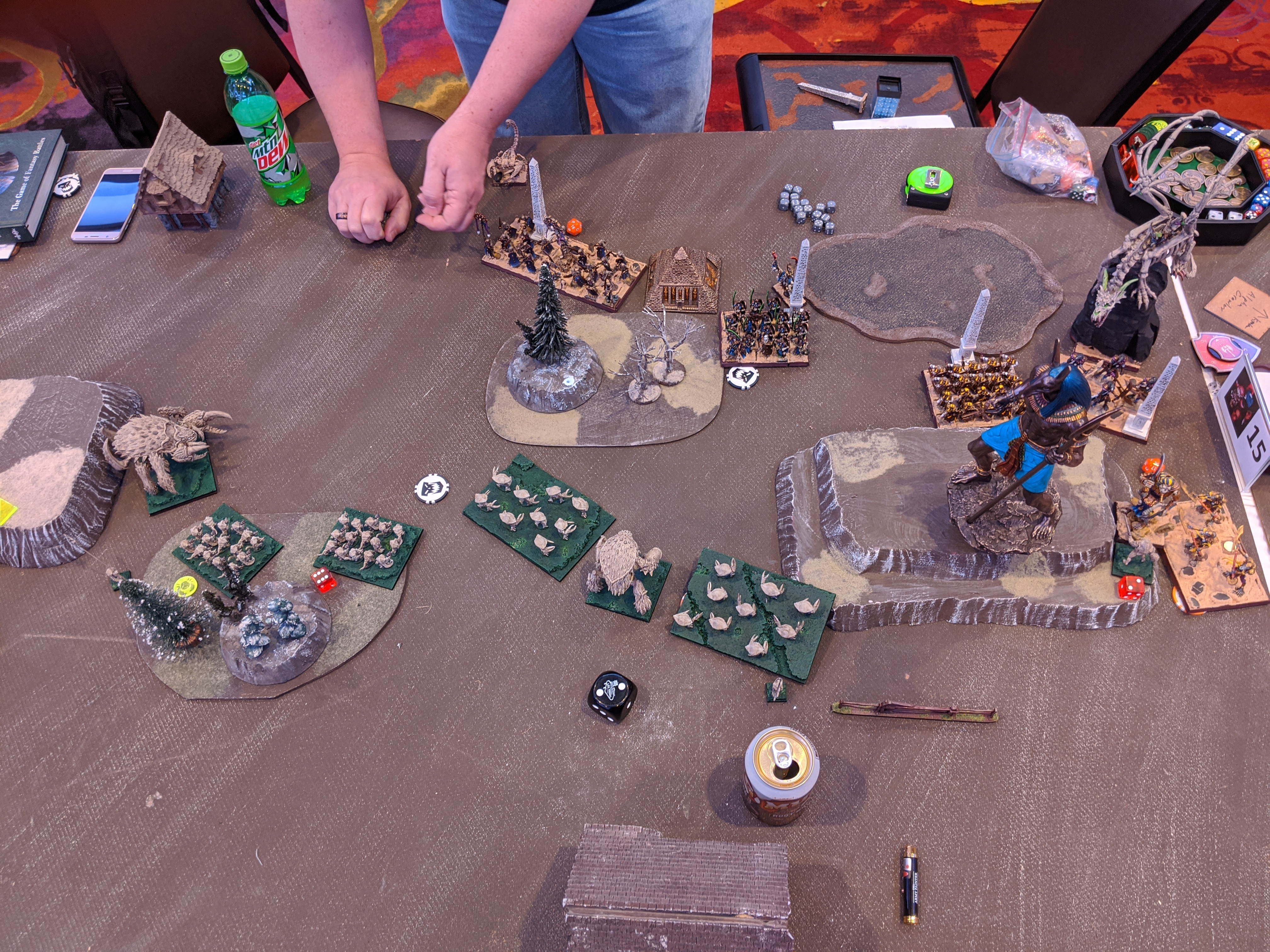 That Kraken is dropkicked and the Heartpiercers blended, but the Eternal only takes 2 damage. Time to flex, bro. The EOD burn my right token (2:1). 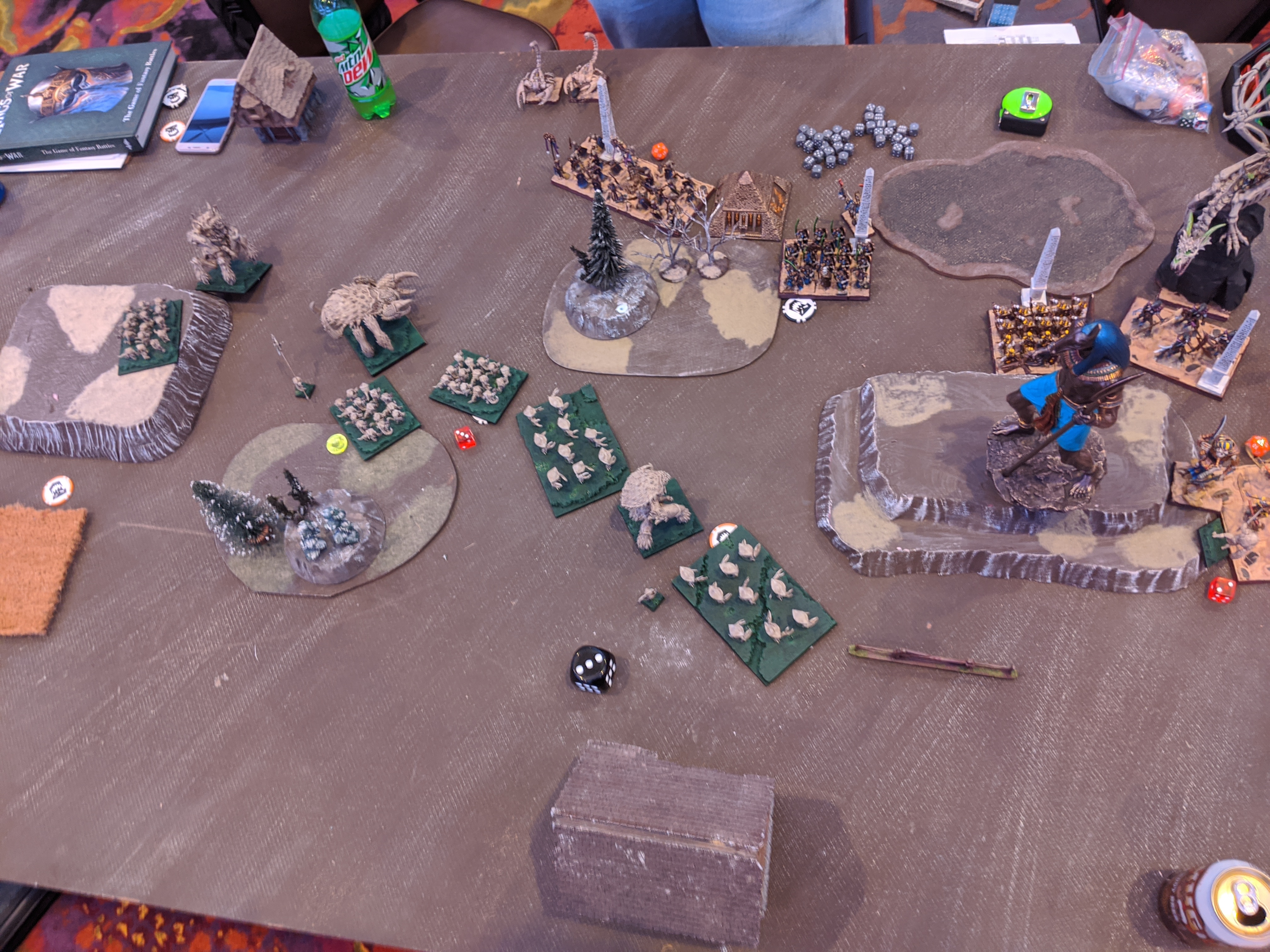 Scuttlin’ Turn 3, the anvils rotate to receive the dead and hope we’ve got all the surge angles covered. Heartpiercers continue concentrating on the Revenants, getting them to 7 damage for future reasons. The Eternal chooses to hack into the injured Enslaved Guardians, for token damage.

Whether through magical means or their own cantankerous willpower, the Revenants flank the Gigas (I don’t remember seeing this, but I also wasn’t worried, since it was 5+/5+), the Eternal is flanked by the Bone Giant and countered by the Guardians, the Mummies fall short of the other Gigas, and Shobik lumbers into the central Kraken … 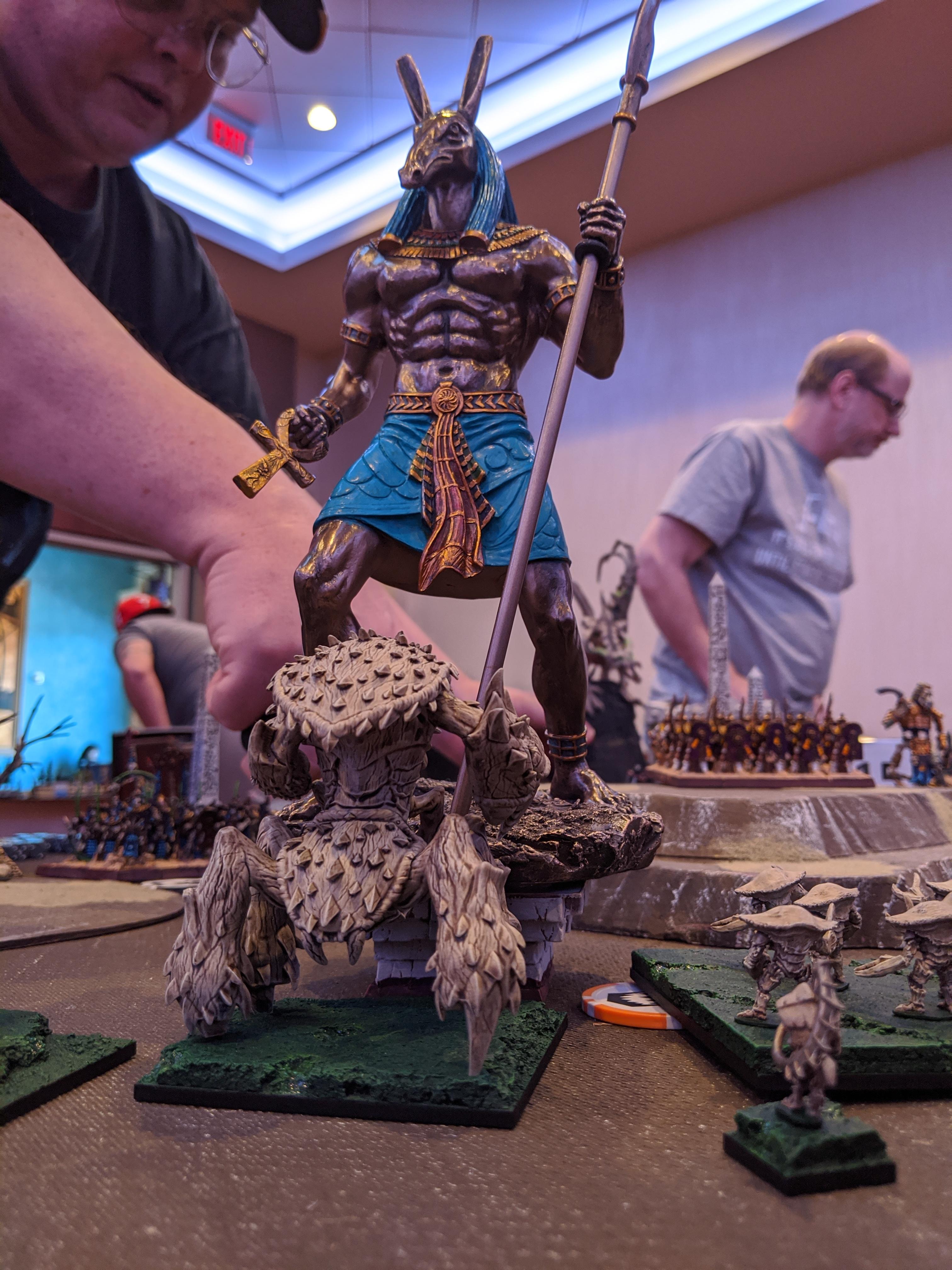 Things turn out pretty well, with the Gigas only taking a predictable 5 damage, the Kraken taking 9! damage from Mega Shobik, and the Eternal getting pulverized and lifeleached.

Scuttlin’ Turn 4, time for crabby vengeance. A catapult gets Krakened (it dies), the Revenants get flanked by Water Elementals + Heartpiercers (they die), Shobik gets countered by the Kraken and flanked by the Revenant’s Gigas (it dies!), and those lower Mummies get charged by the Gigas (they will never die, but also take 2 damage). 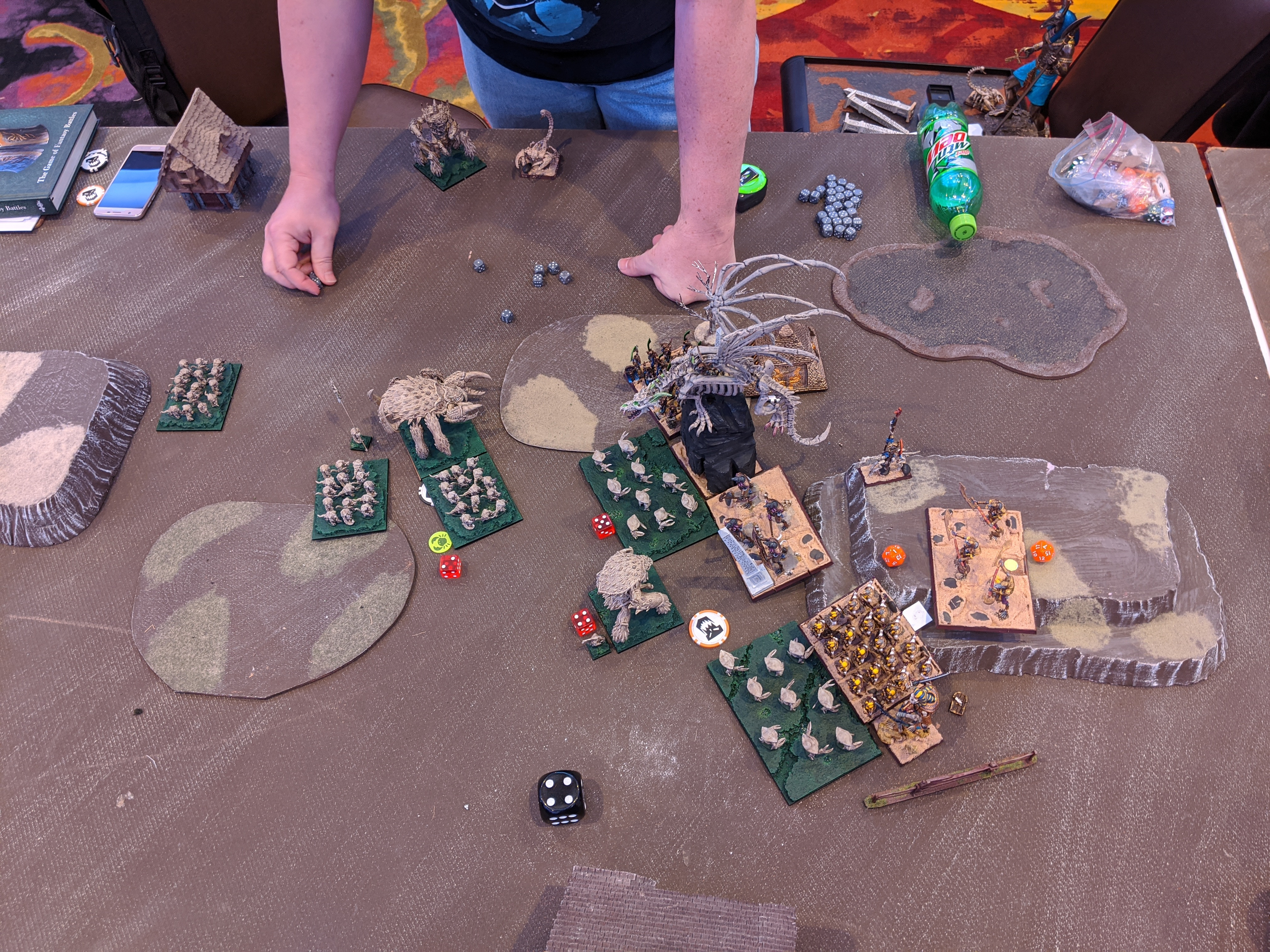 Gigas, prepare to face-tank! One horde takes Mummies + RKOUGFW + Guardians to the front, while the other receives Mummies + Bone Giant. 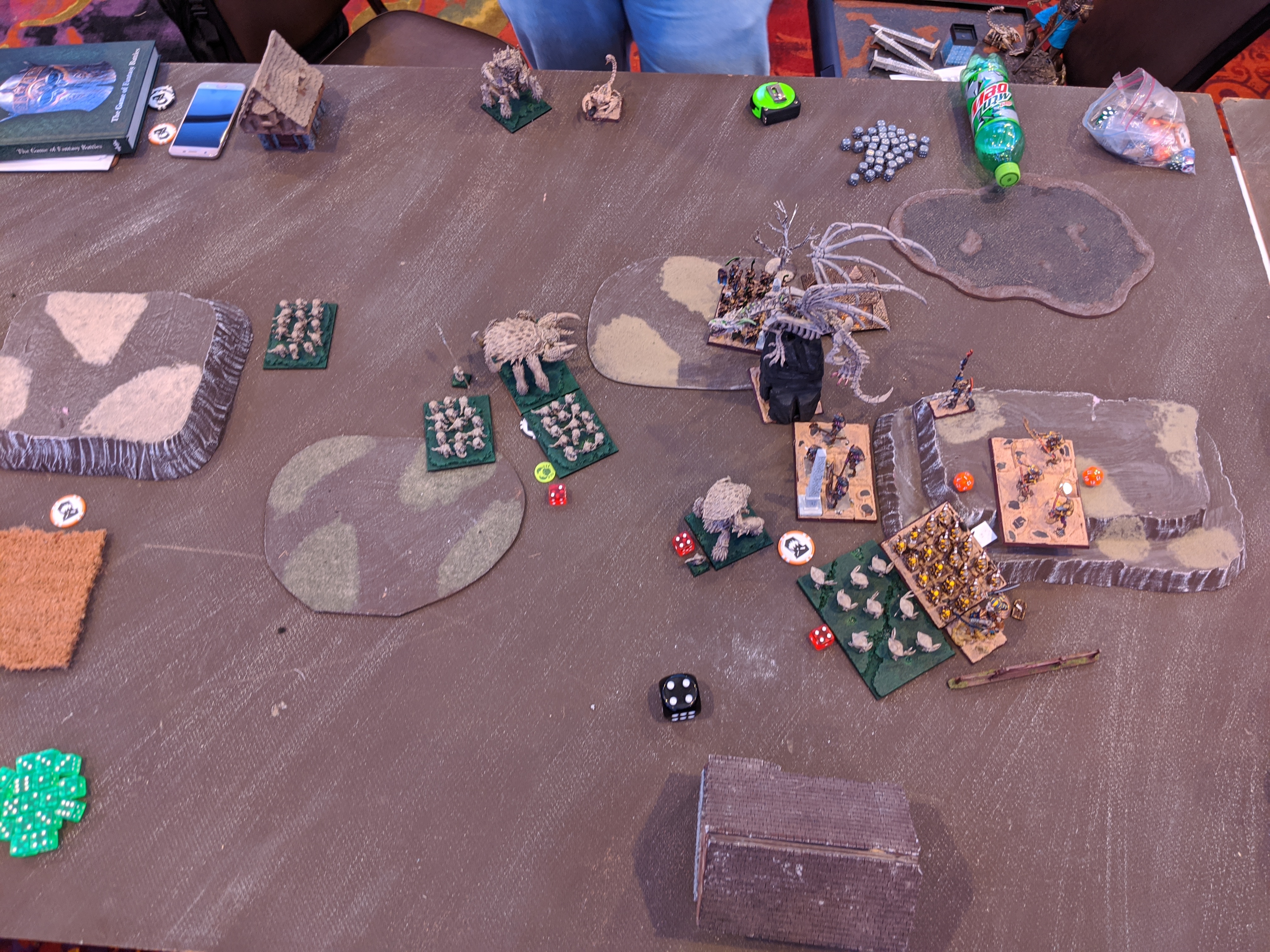 That triple charge is super effective! But the other combat is a fluffer, just 4 damage. 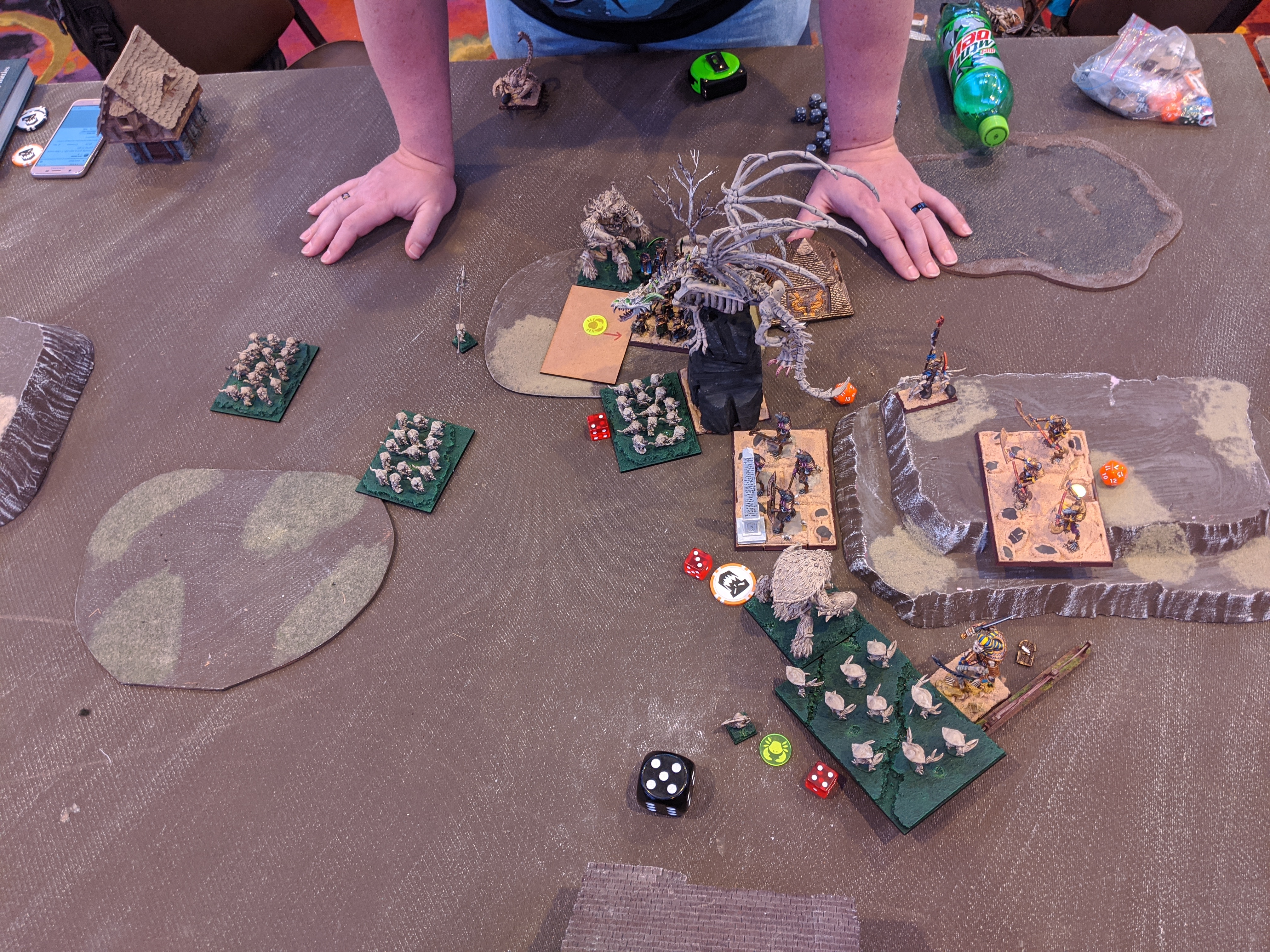 Scuttlin’ Turn 5 – you know, I think that central Kraken has a flank on that Wyrm? Ah well. Instead he combo-charges the Mummies alongside the Gigas (who are shoved onto a fence from whence they will never escape). Up top, the other Kraken + Water Elementals take on the other Mummies, leaving it to some Heartpiercers to ground the Wyrm. Now that’s generalship. Other Heartpiercers put some rounds into the unhurt Enslaved Guardians.

While the bottom Mummies die, the upper ones hold, and the Heartpiercers fail to land the one 5+/5+ they were hoping for. 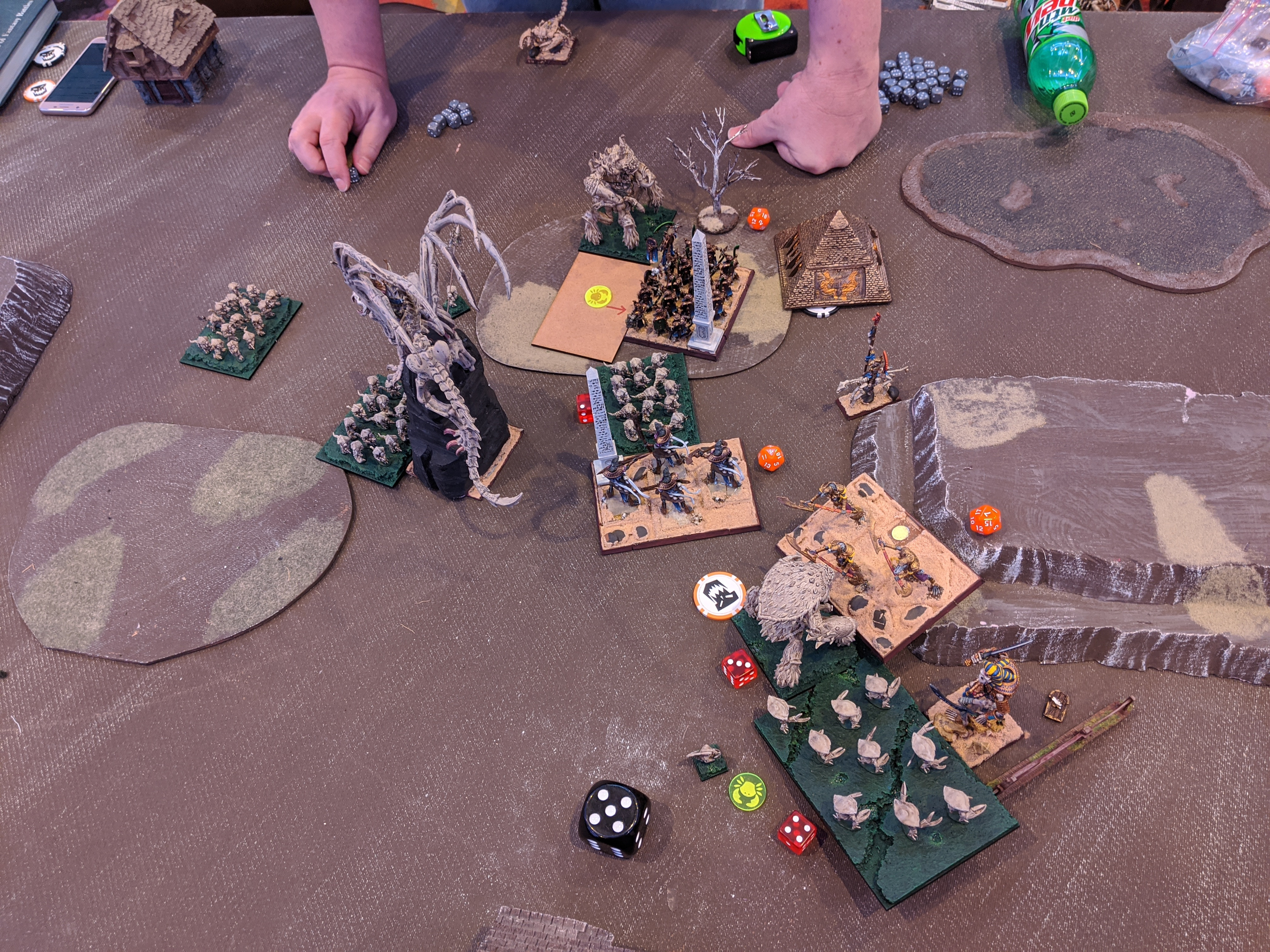 The RKOUGFW hopes into a further back Heartpiercer regiment, letting some Guardians flank the ones trying to poke him. More Guardians front charge the lower Kraken, as the Bone Giant tackles the Gigas and the upper Mummies counter the Water Elementals. 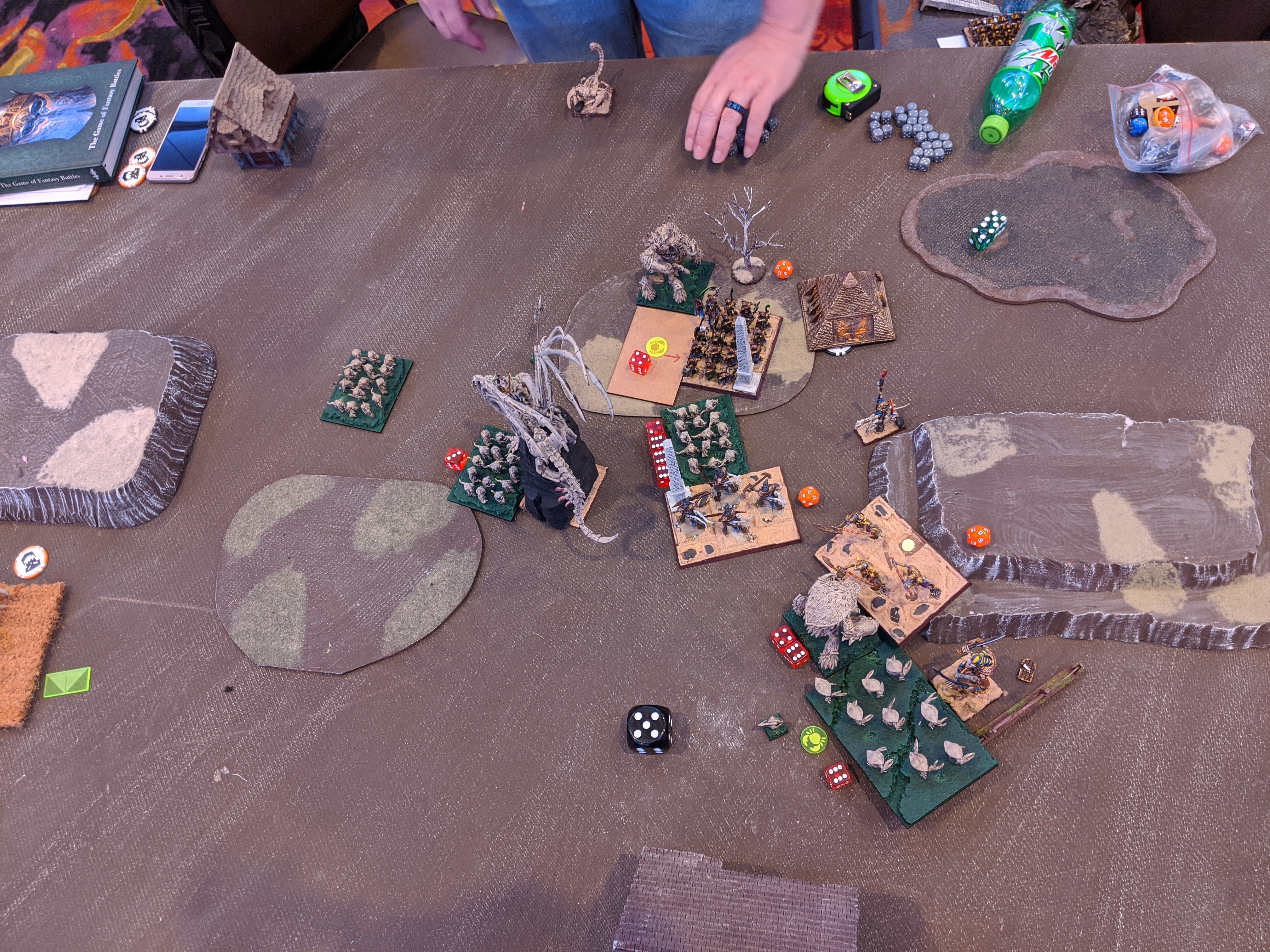 Lots of things get damaged, nothing breaks … because he snaked the Guardian’s Heartpiercers with 20 damage on them! Now that’s generalship. EOD is able to burn another token (2:2). 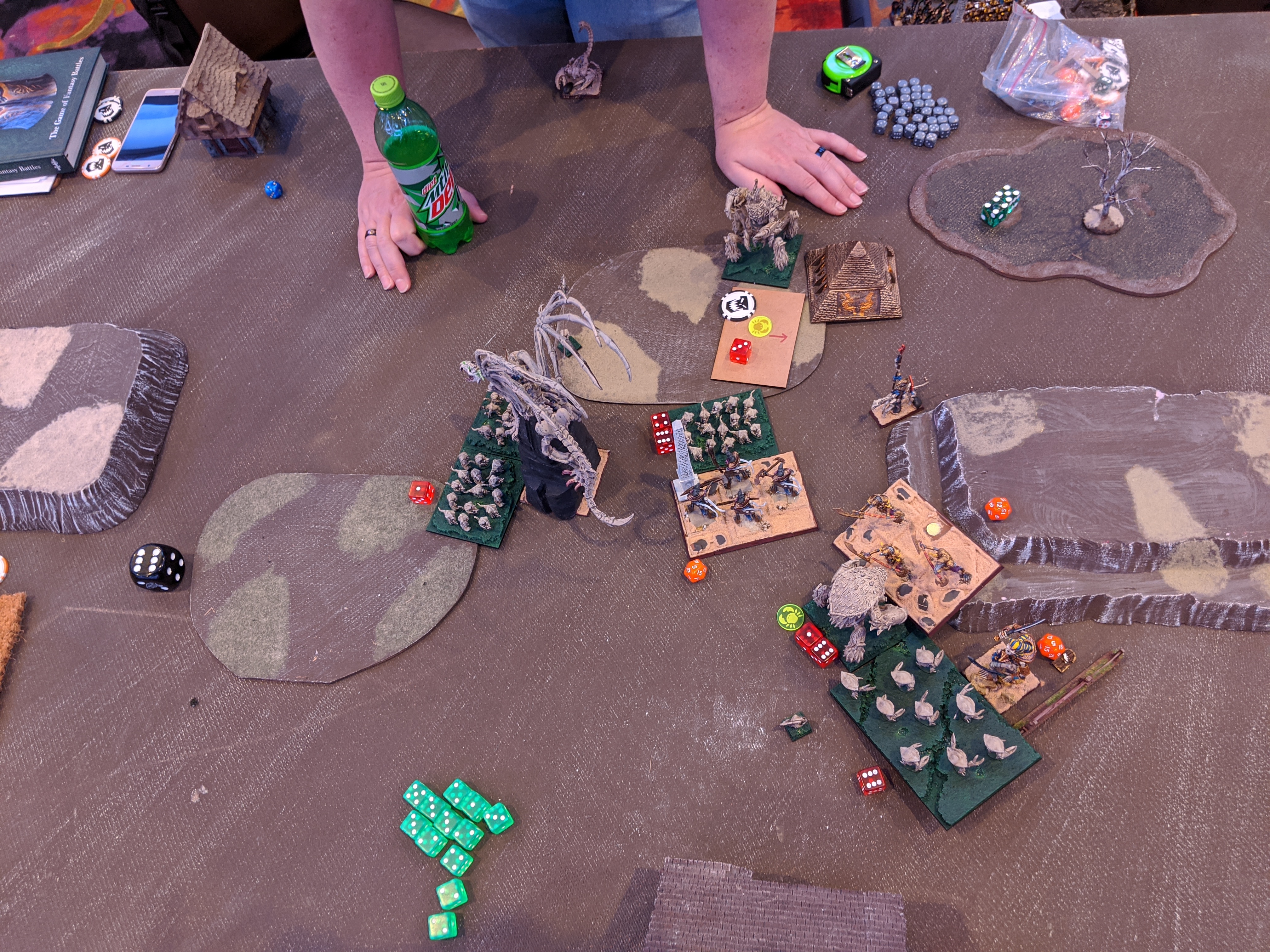 Scuttlin’ Turn 6! Heartpiercers mob the Wyrm and counter-charge the Guardians (10 damage regened!), along with a lot of counter-charging from bigger dudes into Mummies / Guardians / Bone Giants. The upper Mummies rout and the Water Elementals + Kraken overrun, burning my final token (3:2), but otherwise everything holds tight, and the Wyrm fends off the 16 5+/5+ little stabs trying to ground him. 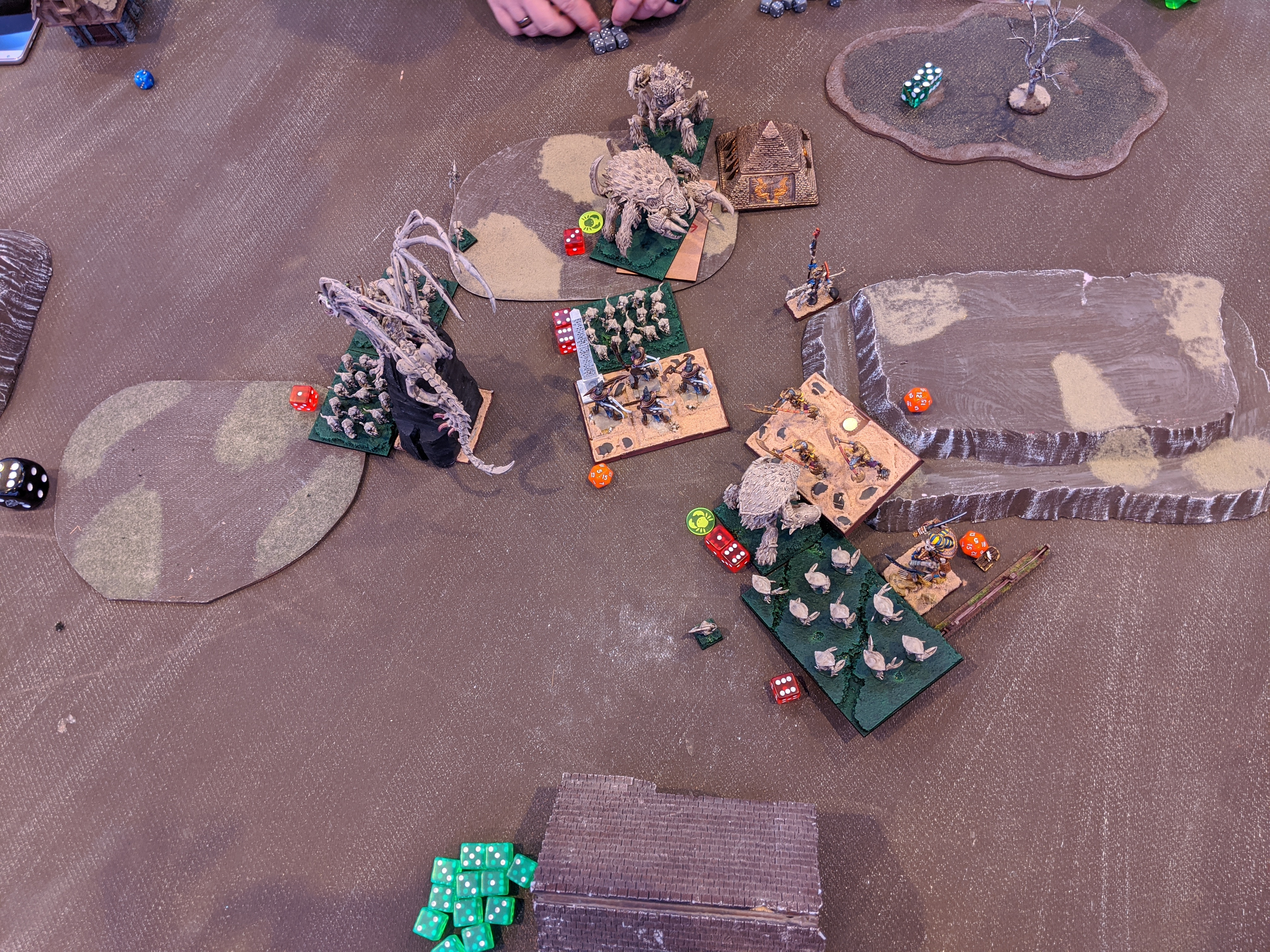 The Wyrm breaks through the Heartpiercer wall, but otherwise everybody wavers … except for those central Heartpiercers, because yes, those Enslaved Guardians got them back to 20 damage and snaked them again! Hahaha! 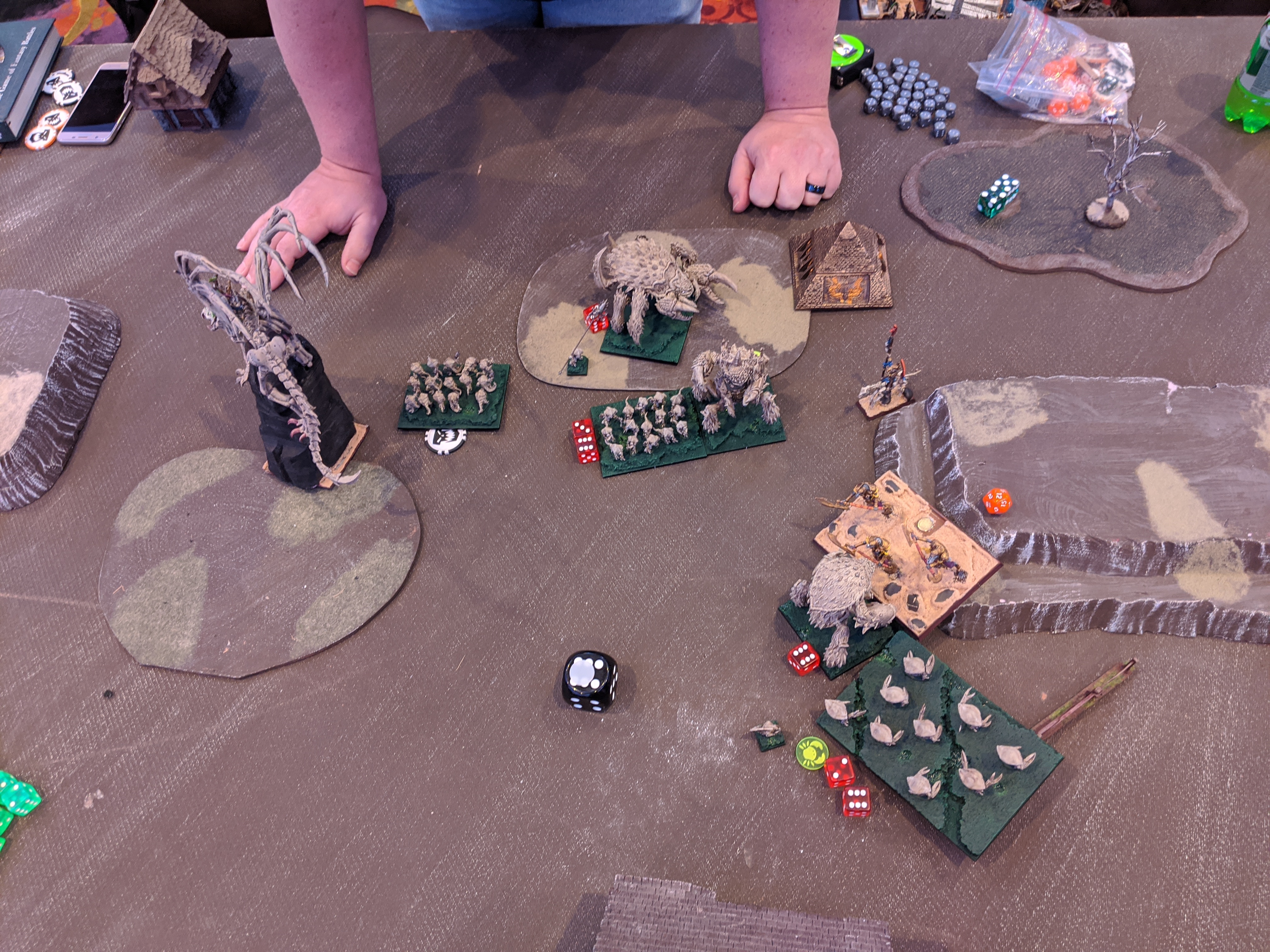 Scuttlin’ Turn 7! The Gigas, thanks to fury, counter-charge the Bone Giant and cut him down at the knees. The Kraken regens furiously (9 of 15), while the other Kraken shoots into those Guardians harassing those HEROMODE Heartpiercers and ends them (said Heartpiercers regen 11 of 20 damage). Finally, the free Heartpiercers luxuriate on the central token and shoot the remaining Catapult off the table. 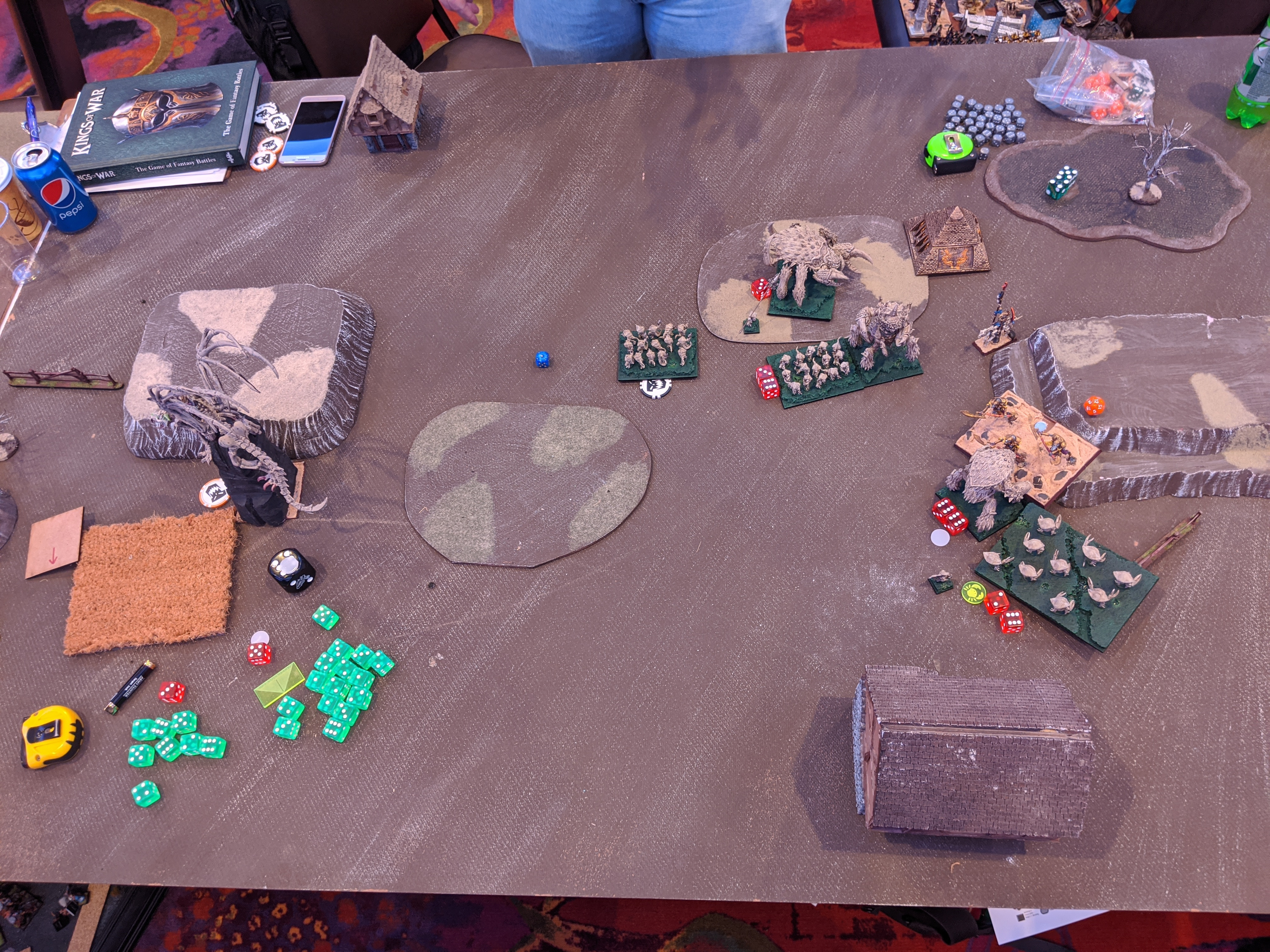 Happy to be done with this farce, the RKOUGFW flies off and burns a token (3:3), and the Guardians swing into their Kraken one more time and wavered it. Crabs take it thanks to the center objective (4:3).

While I started this GT with terrible play and frigid dice, I happily ended it with some actual strategy and deliciously hot dice – particularly if we count my opponent’s double snake eyes, thanks for the assist, man! Good smashy game to end my first 3E GT, and a better run with the crabs than I had expected to have, frankly.

When everything was totaled up, I ended up placing 26 out of 48, just missing the Counter Charge award for dead middle of the pack. But putting the numbers aside, Best of the Rest was a great event that I’m thrilled to have happen in the first place, as it was wonderful to be some small part of the US Masters and share in this amazing KOW community.

Speaking of meeting great players and seeing some of my favorite online armies in person, you can catch some shots of my favorite armies / units (and more of my own) in this album here: BEST OF THE REST #0