After our beatdown at the hands of STG we plummeted down to the bottom and faced Beef & Wings, a crew of 40k players with limited KOW experience, great attitudes and plentiful margaritas ❤ A wonderful follow-up all told.

A weird list with some truly frightening flying monsters. As youll see I continually underestimated the Lord of Lies . . . Worth noting that this was the players second game of KOW using physical minis. Respect.

Second round was Push (1 token), and whoever won initiative the Abyssals headed out first. 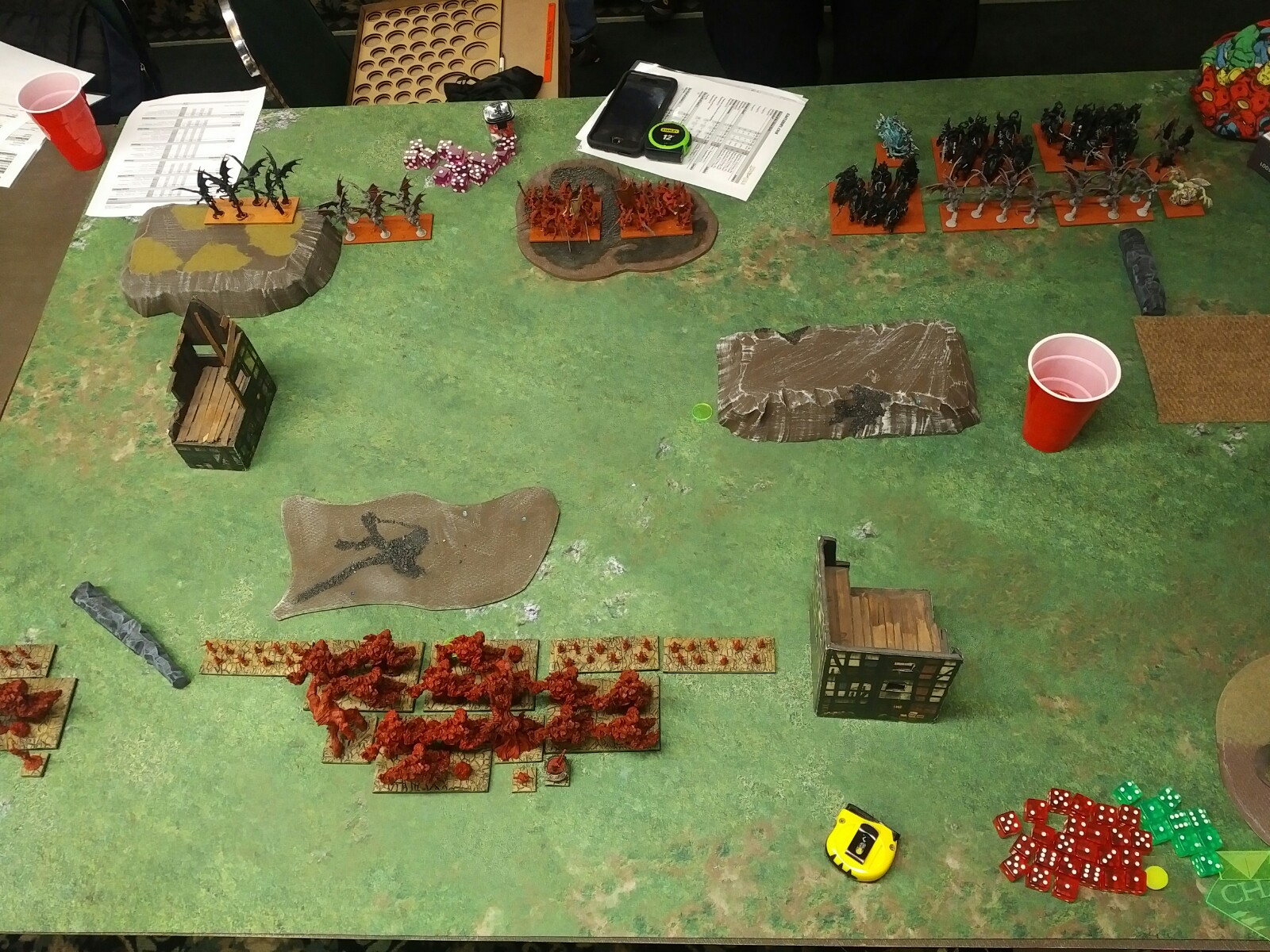 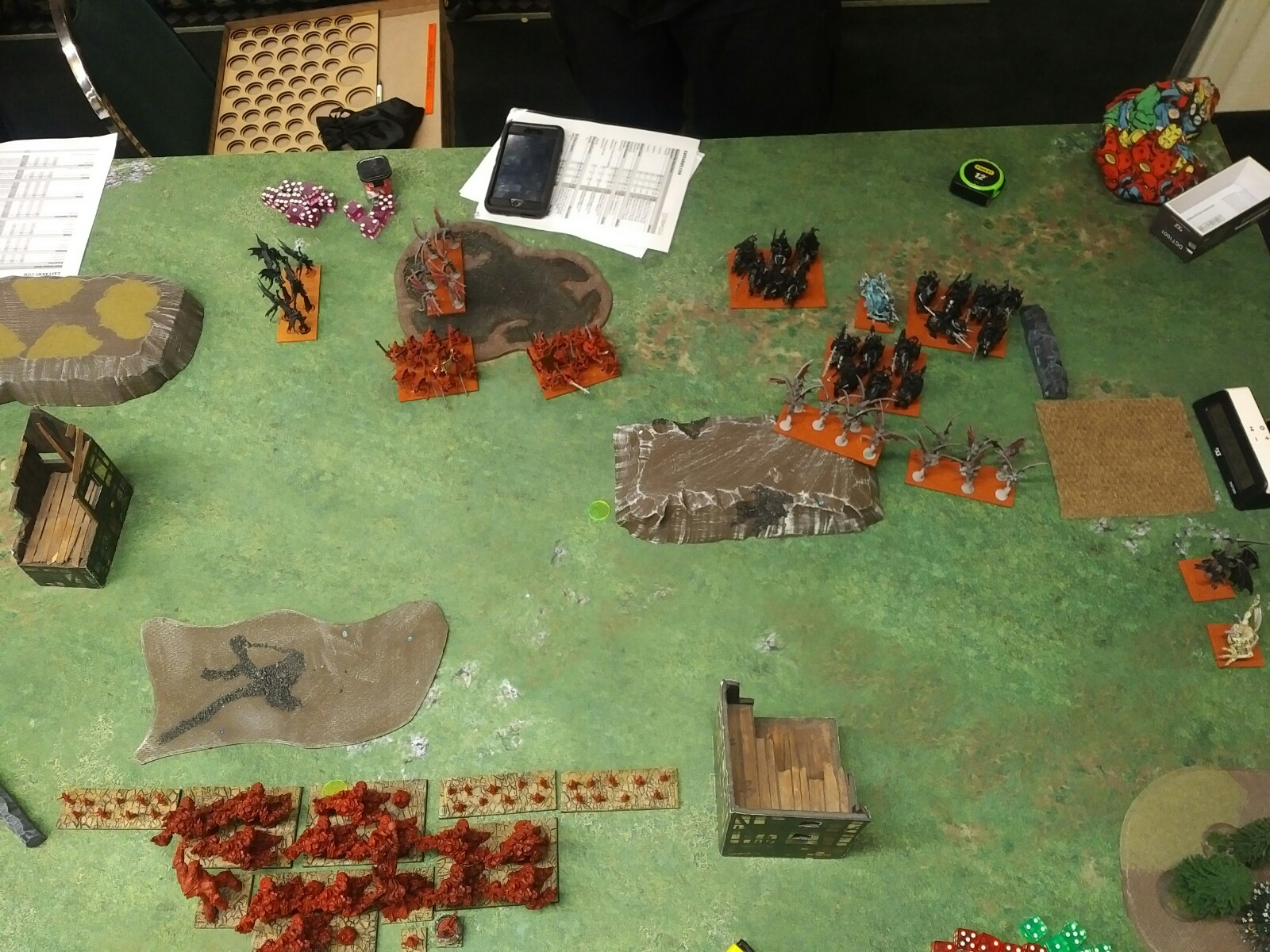 Abyssals roll out! Lord of Lies and Archfiend pound down the right flank as the cavalry gallop in towards the flank of fire. 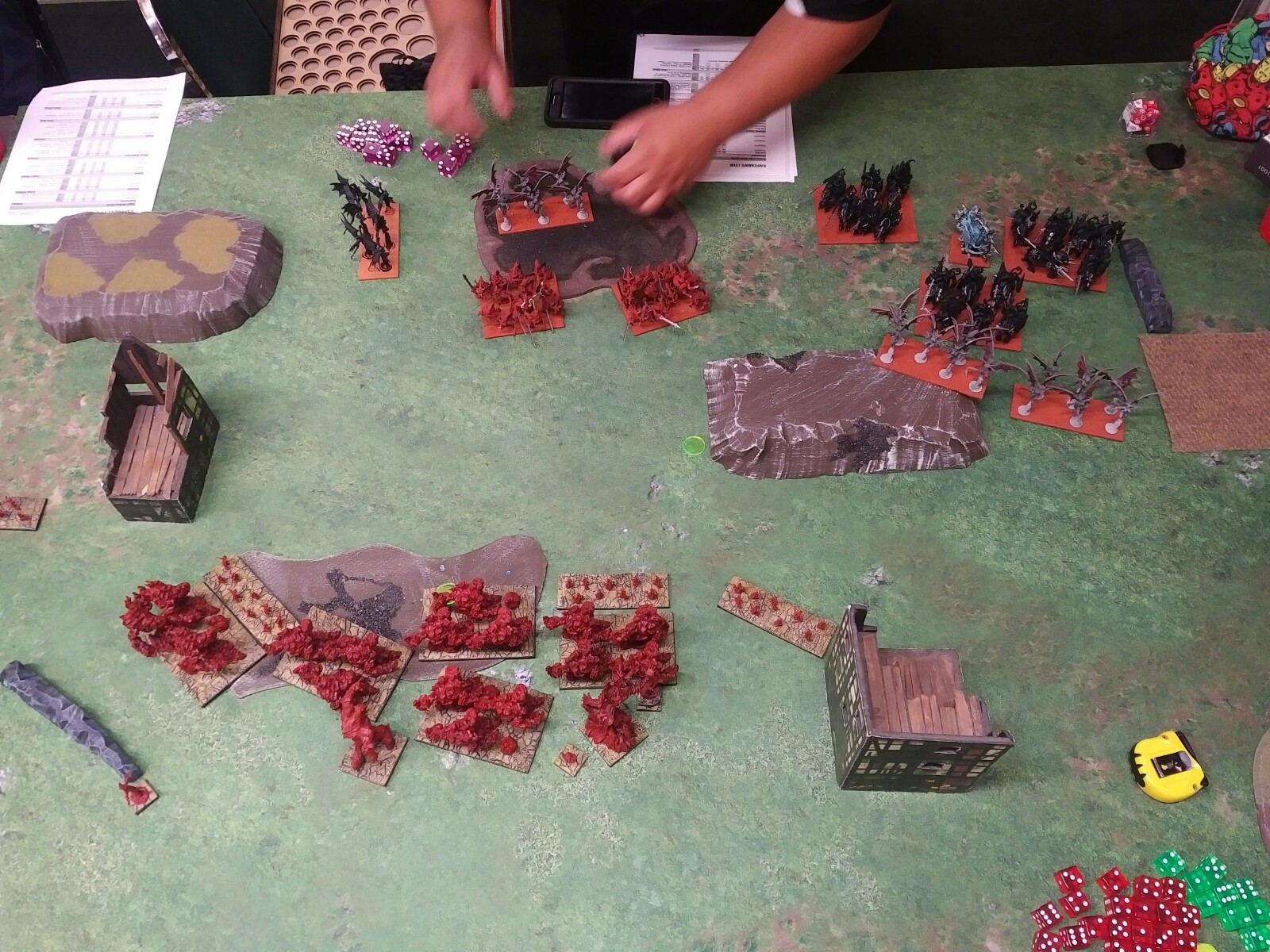 Bloodfire sludge forward, Sprites voyaging out for a proper chaff-off with all of those Gargoyles. 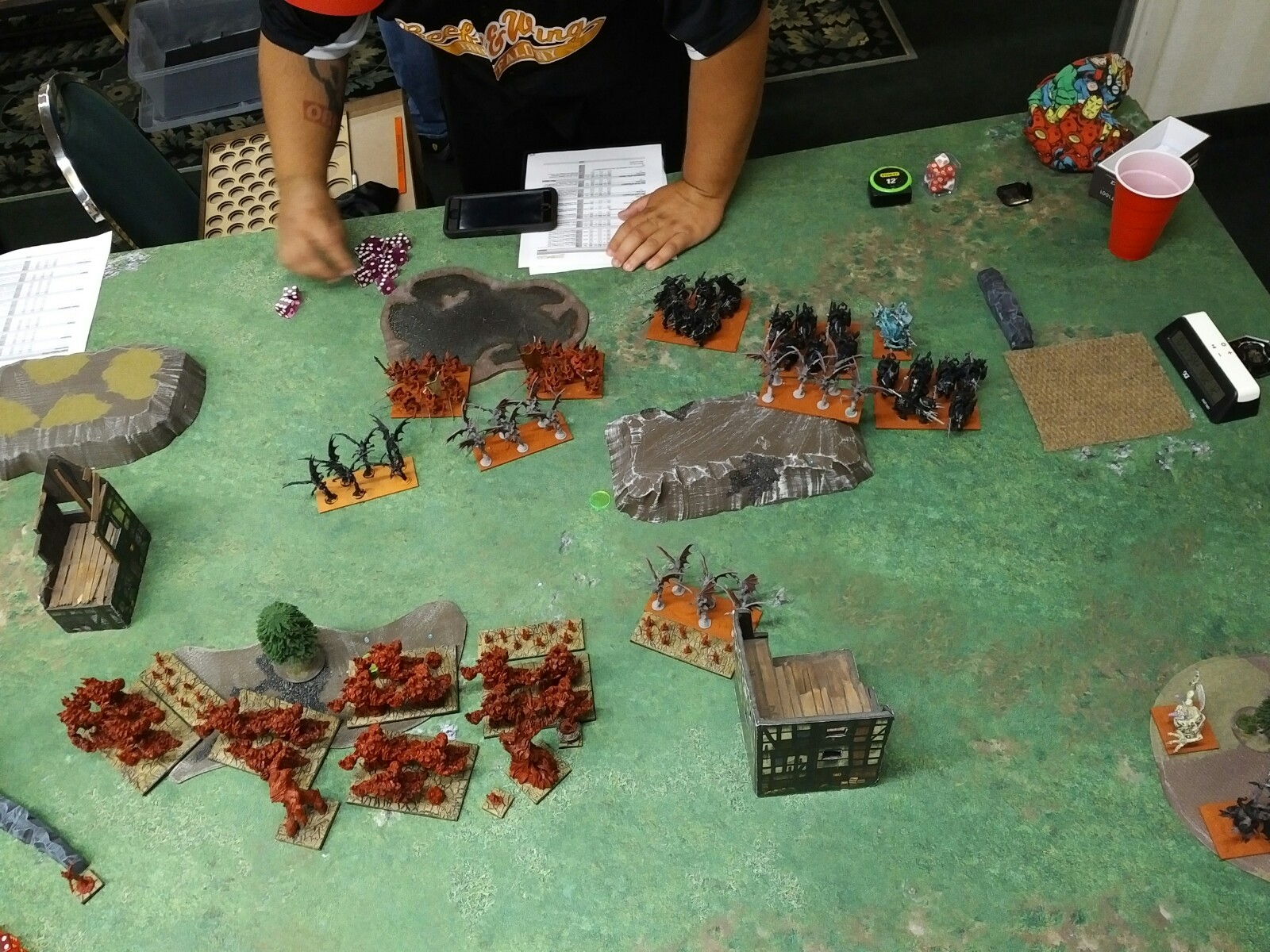 The Abyssals close further, while some Gargs pounce on the rightmost Sprites, doing 5 damage and wavering them. 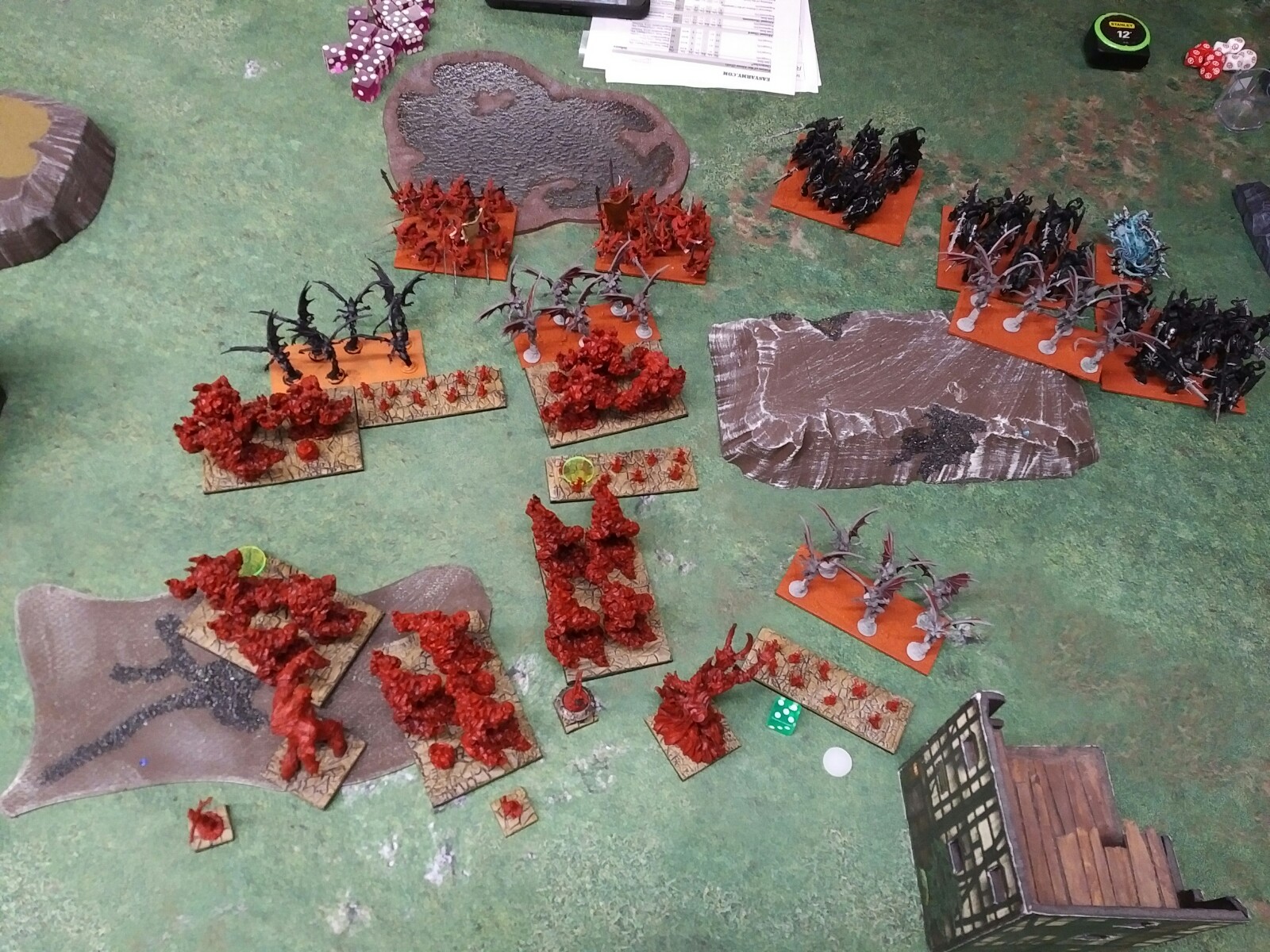 Sallies pounce on the Abyssal chaff, sending Fire + Sprites into one, Fire into another and dispatching Agnes to laser off the ones harrying the Sprites. Yet more Sprites scoop up the central push counter as the rest of the red tide flows forward. 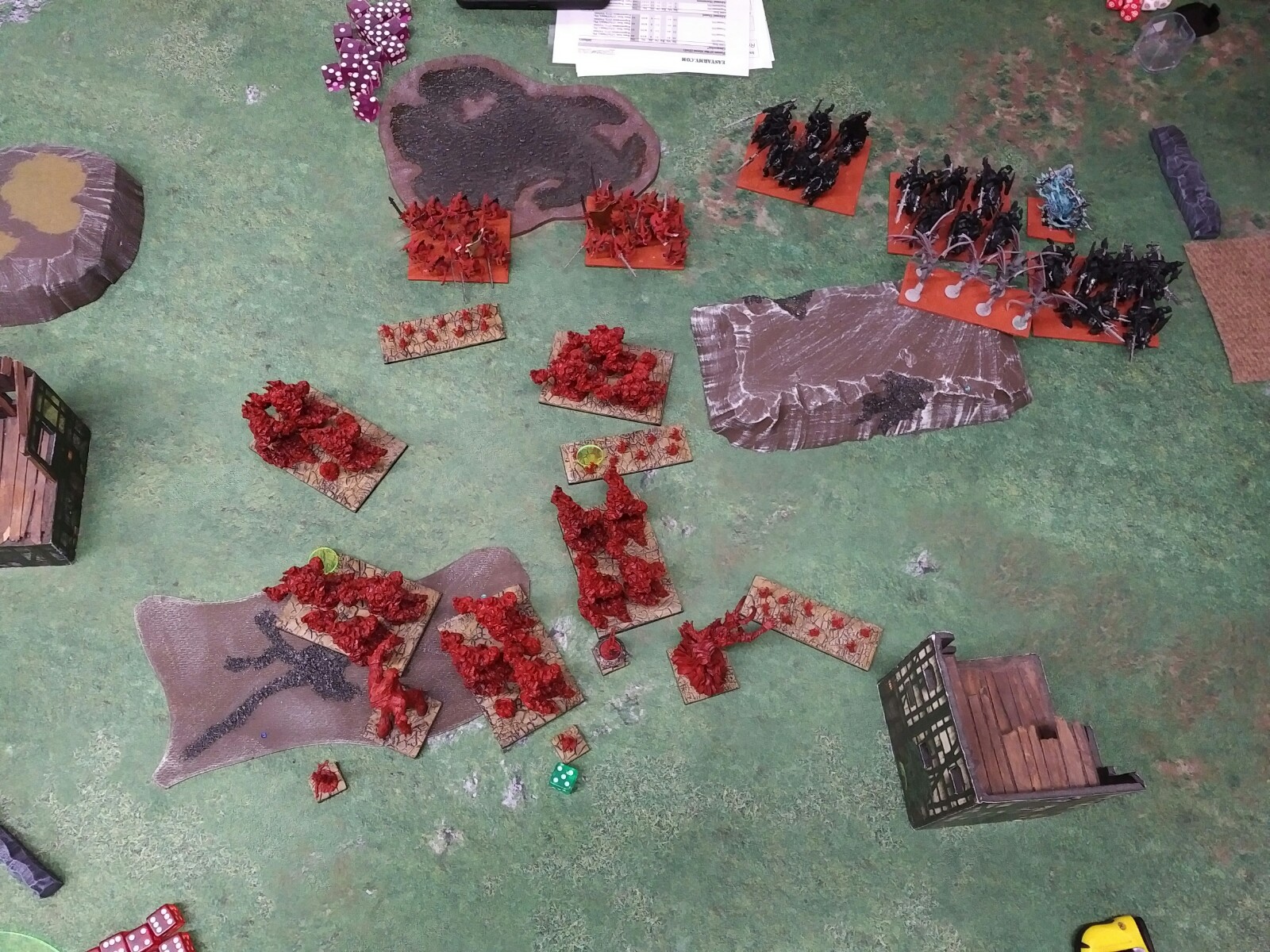 The Gargoyles do not survive ;D And the little Mage prays all 5 wounds off of those Sprites. 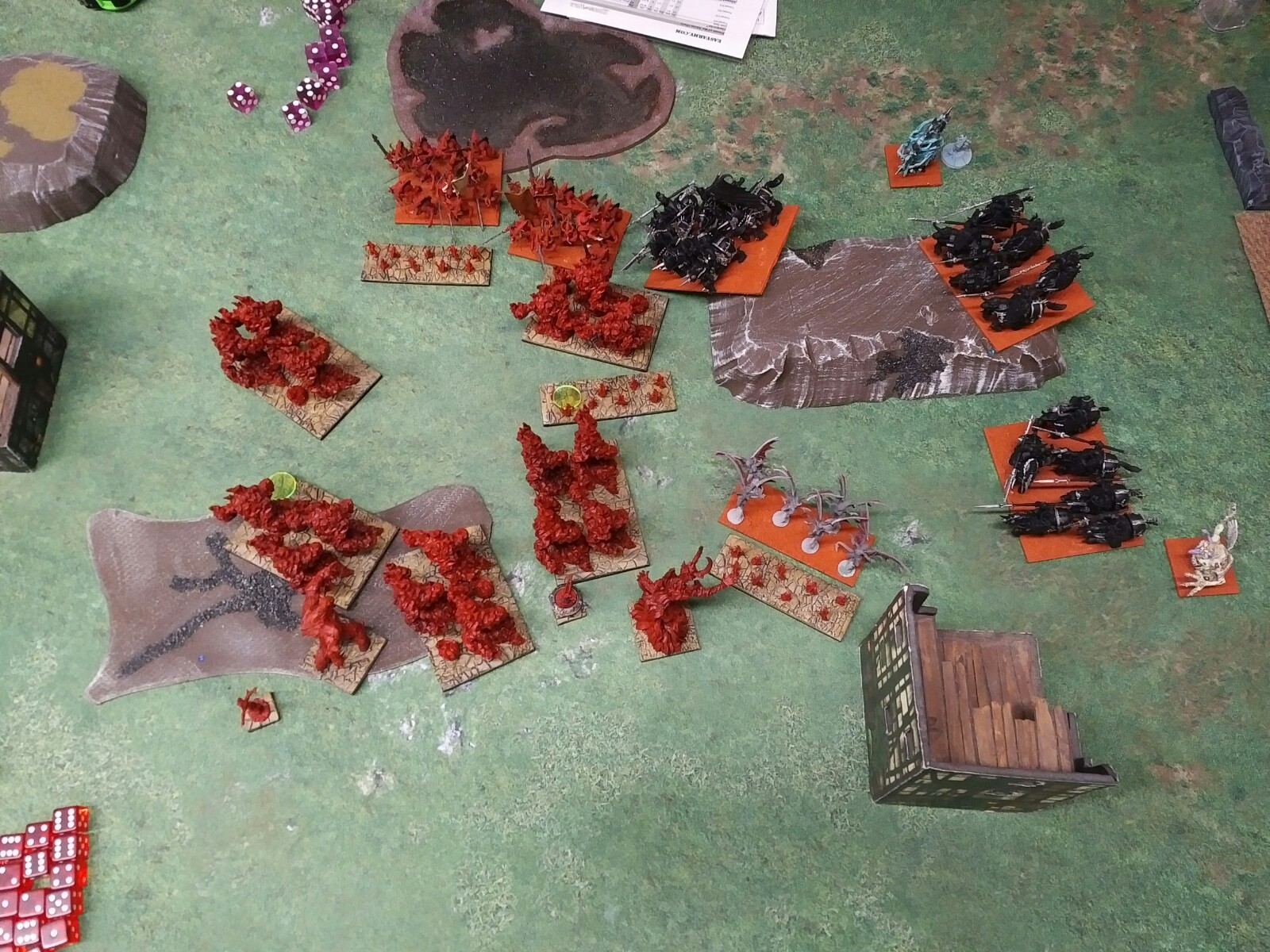 The Abyssals strike back, Guard charging Sprites and more Guard combo-charging the extended Fire Elementals with some Horsemen, while the final Gargoyles swoop down on those same Sprites on the right flank. Off shot the Archfiend starts to round the building in the Bloodfire zone, tagging the little Mage with his lightning and popping her. 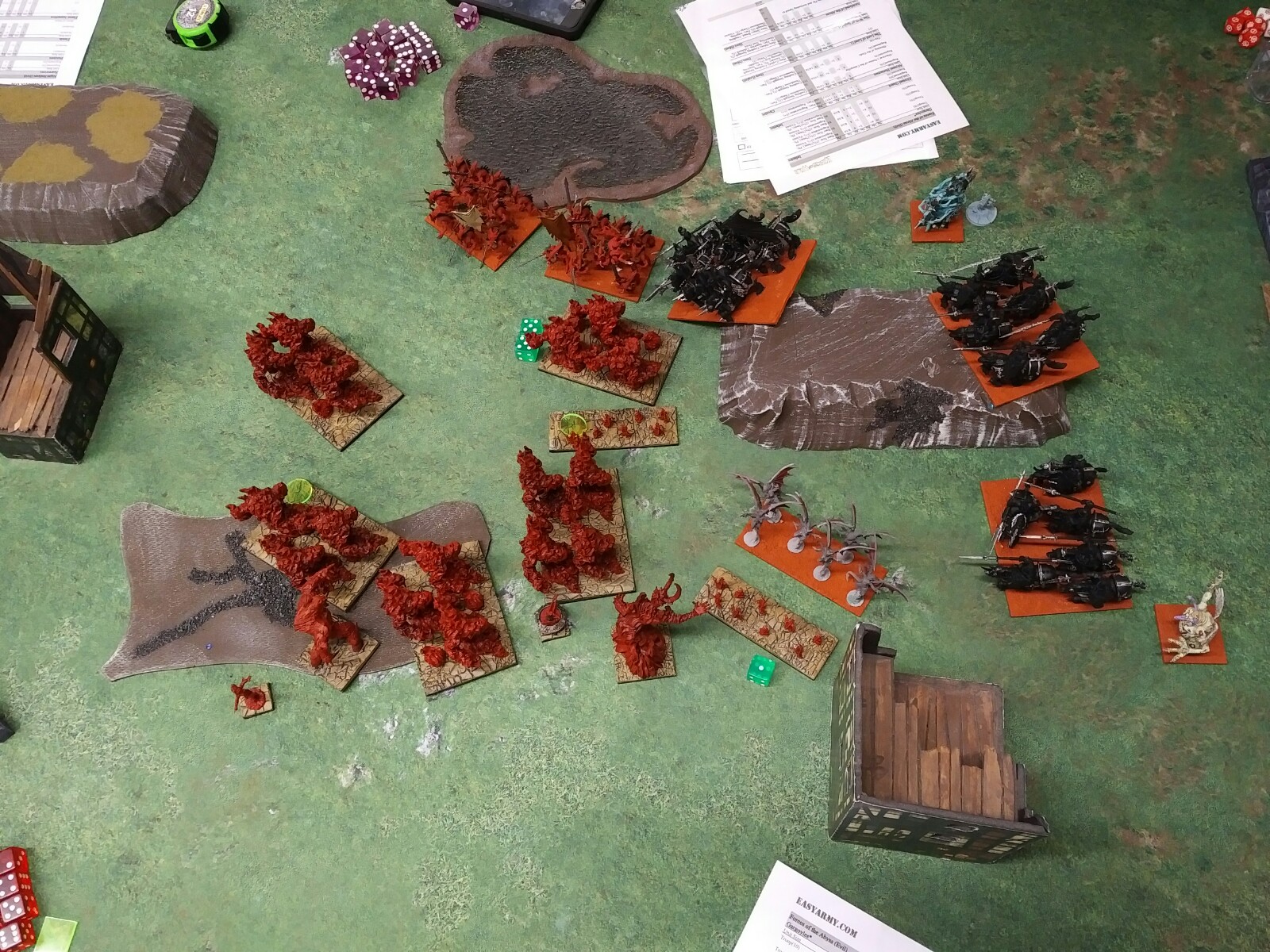 The Guards drive off their Sprites, however the Gargoyles do a single damage to theirs and the Fire horde absorbs 10 damage and holds – possibly without inspiring in range! 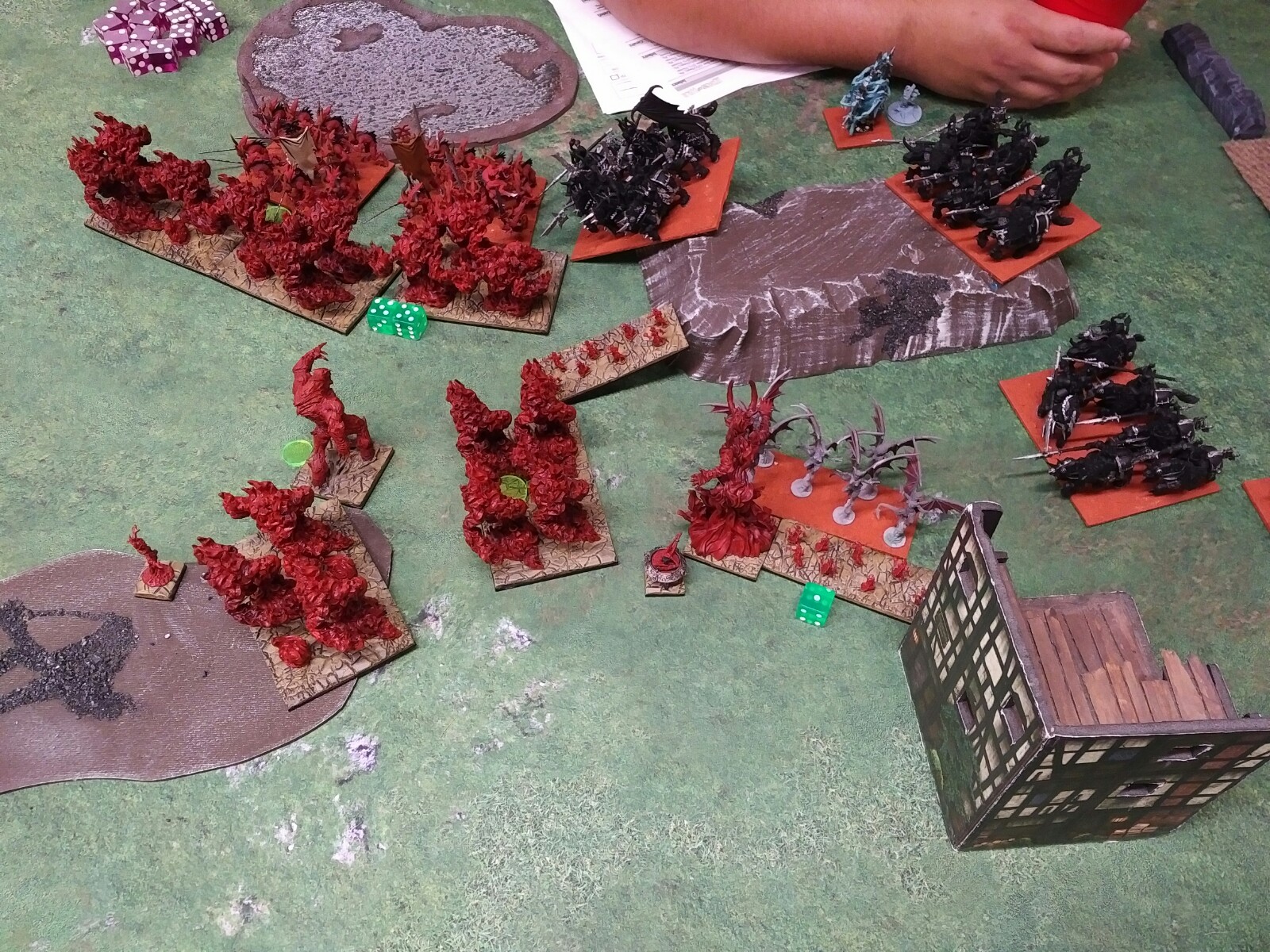 The pummeling intensifies as the left Abyssal Guard are slammed by two hordes of Fire Elementals, the Guard next to them are counter-charged by the wounded horde, and the last of the Gargoyles are plowed into by Agnes and those besieged Sprites. The Sprites give their token to the courageous Fire horde. The CLOFD gets double bane-chanted and vomits on the left Horsemen for a few damage. 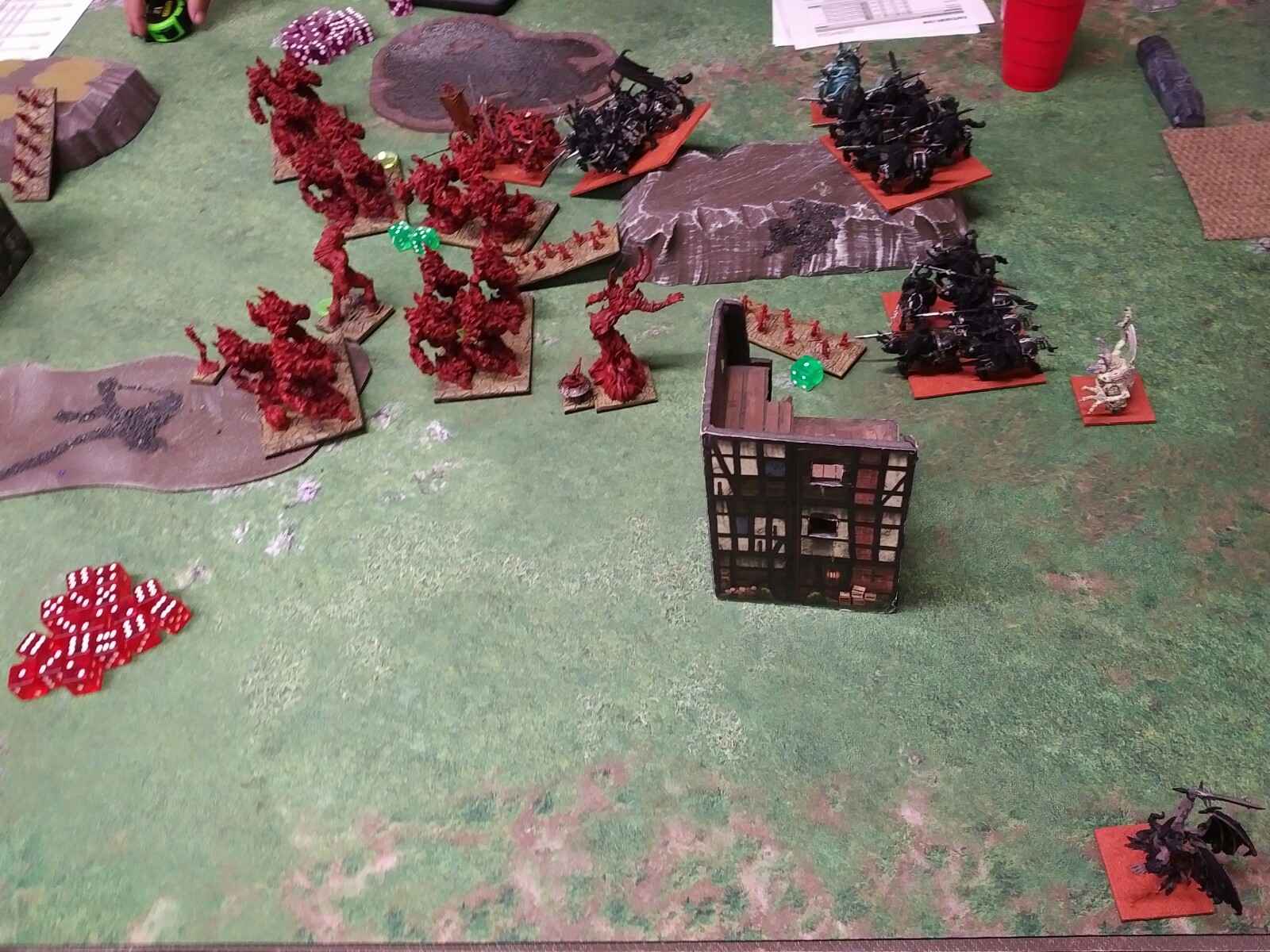 Combat is fairly expected, with the double-charged Guard melted, the counter-charged Guard relatively fine and the Gargoyles snatched from the air and splattered by Agnes and her tiny friends. 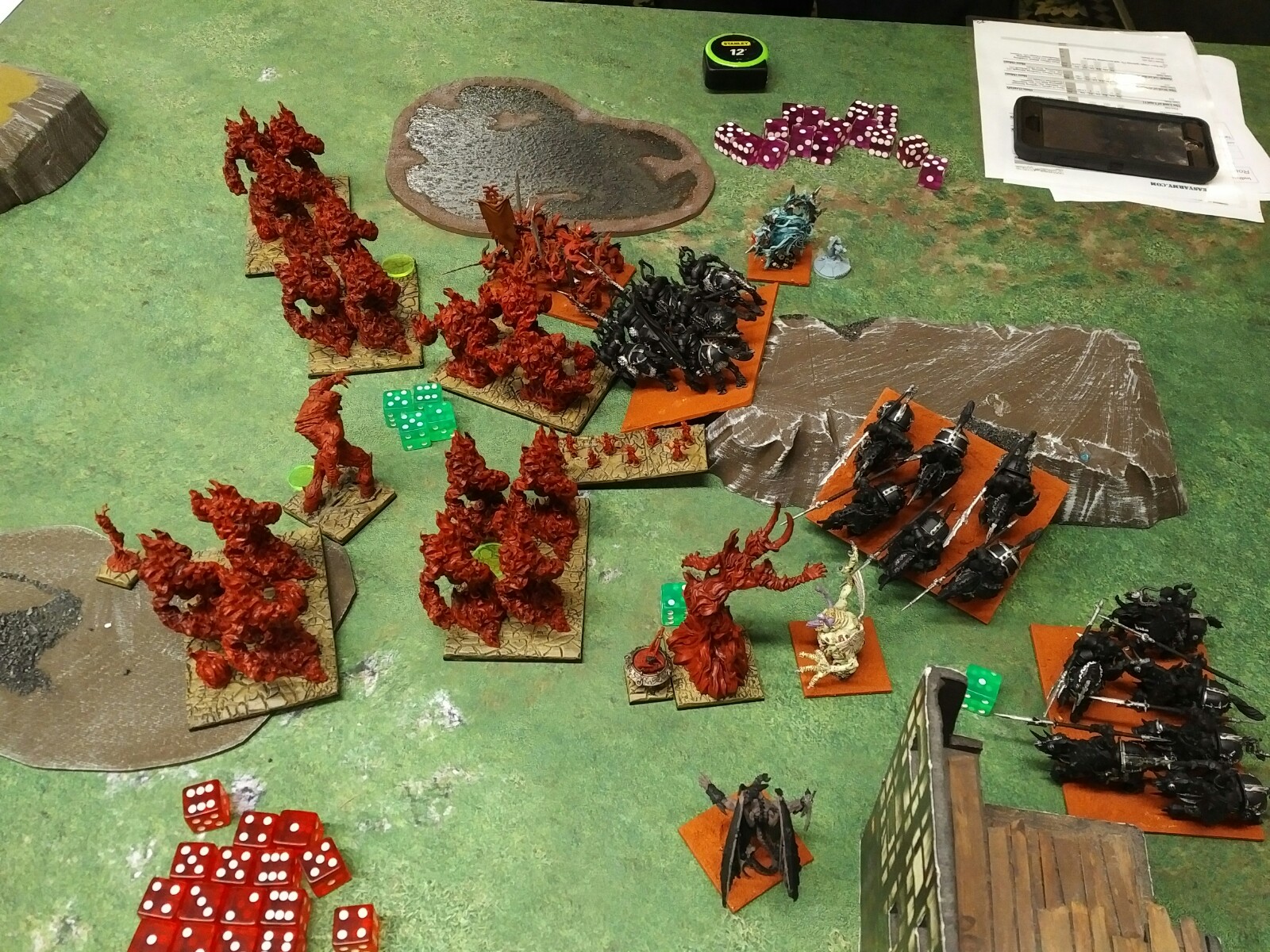 Abyssal Turn 4 starts with the Well pulling the damage off the wounded Horsemen, who flank the wounded Fire Elementals as the Guard head back into their front. They drive their elemental foes up to 17 damage but snake eyes the rout! The Lord of Lies tackles Agnes for 2 damage and the rightmost Horsemen finish off those accursed Sprites. 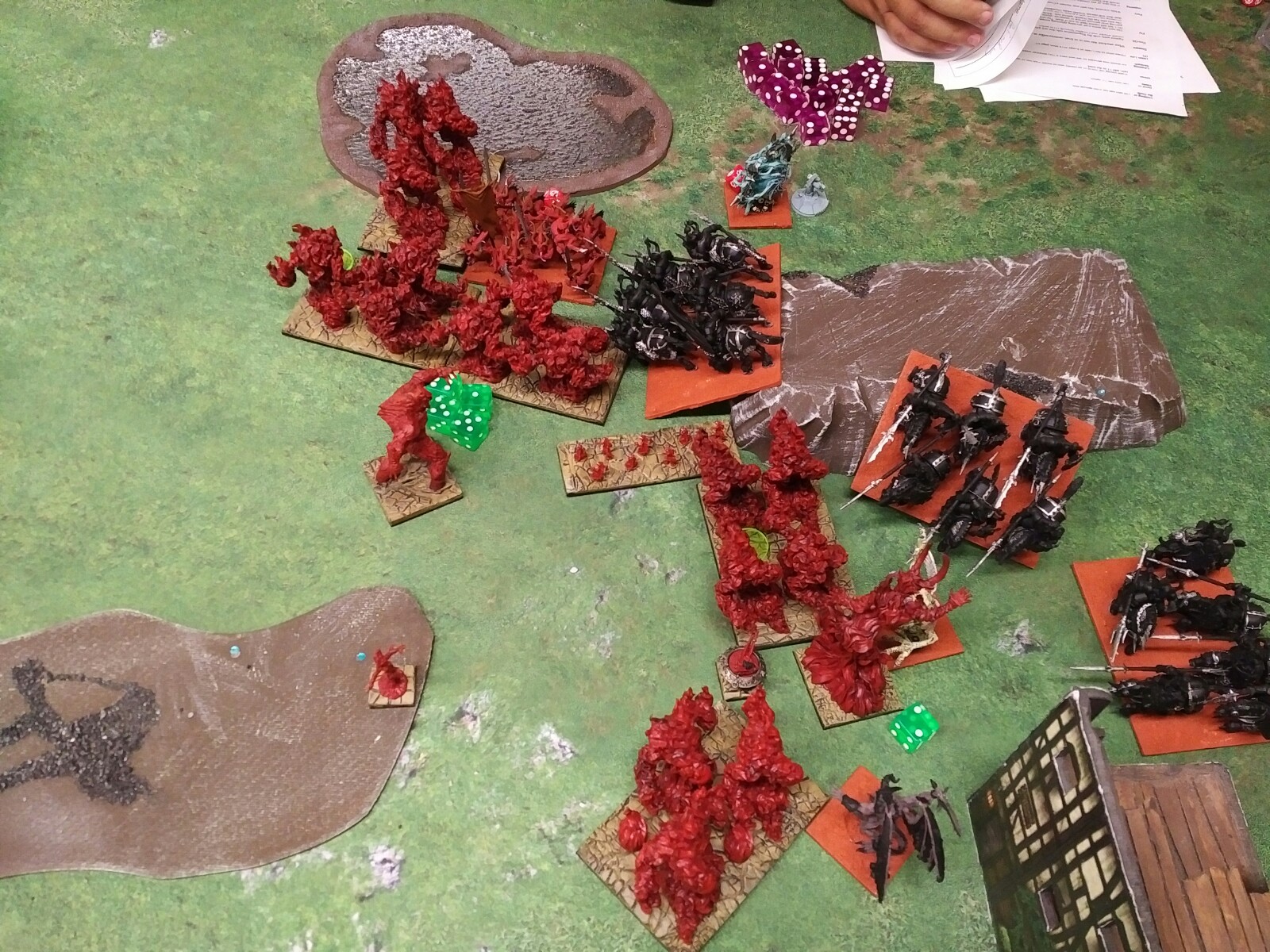 Fire Elementals mob the Abyssal Guard, reducing them to a whiff of brimstone. Agnes and the courageous Fire horde slam the Lord of Lies but cant even manage to waver him (8 damage?), and the Fire horde who was lucky enough to charge the Archfiend smash a sterling 9 damage into him but again cant even waver. In less violent news, the big Mage heals Agnes for 1 damage and the CLOFD pukes a few more wounds into the same Horsemen from before. 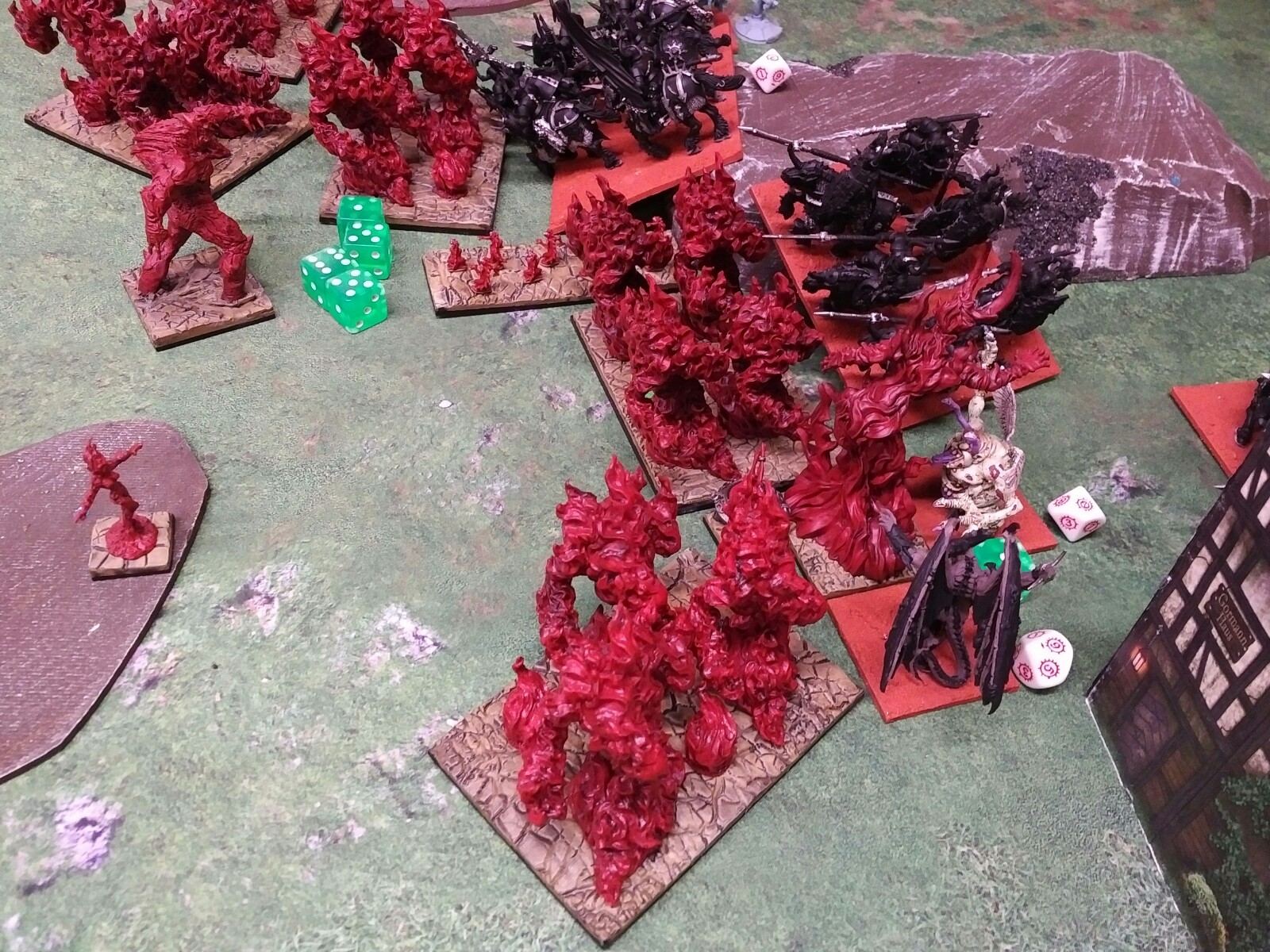 Turn 5 begins with the Well cleaning up the Horsemen again . . . and my heart dropping as Agnes is flanked by the Archfiend and counter-charged by the Lord of Lies. The healed Horsemen charge into the mangled Fire Elementals and the courageous horde takes a charge from a fresh Horsemen regiment. 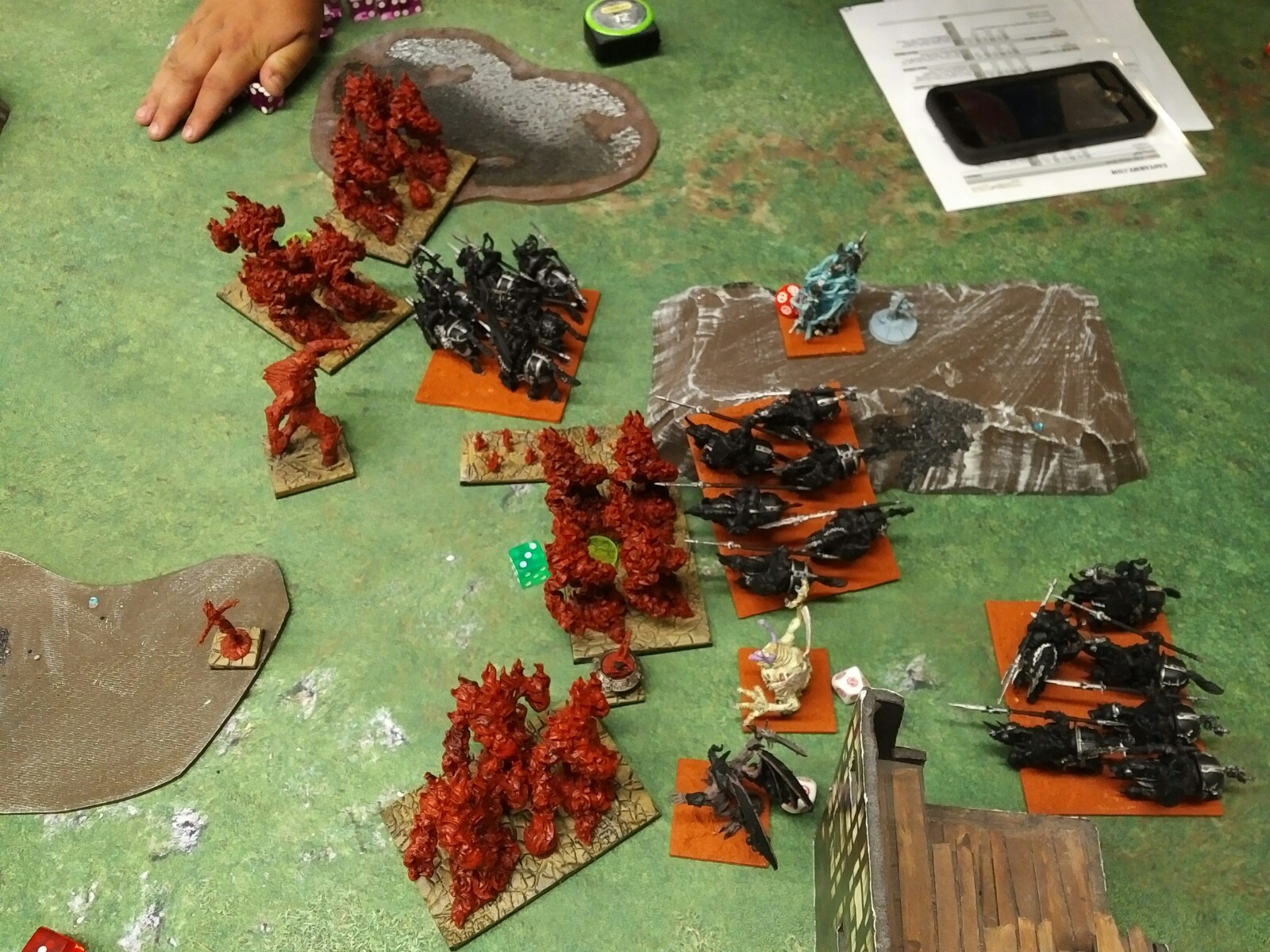 Agnes doesnt make it. Nor does that Fire horde up top, although the courageous horde is fine. 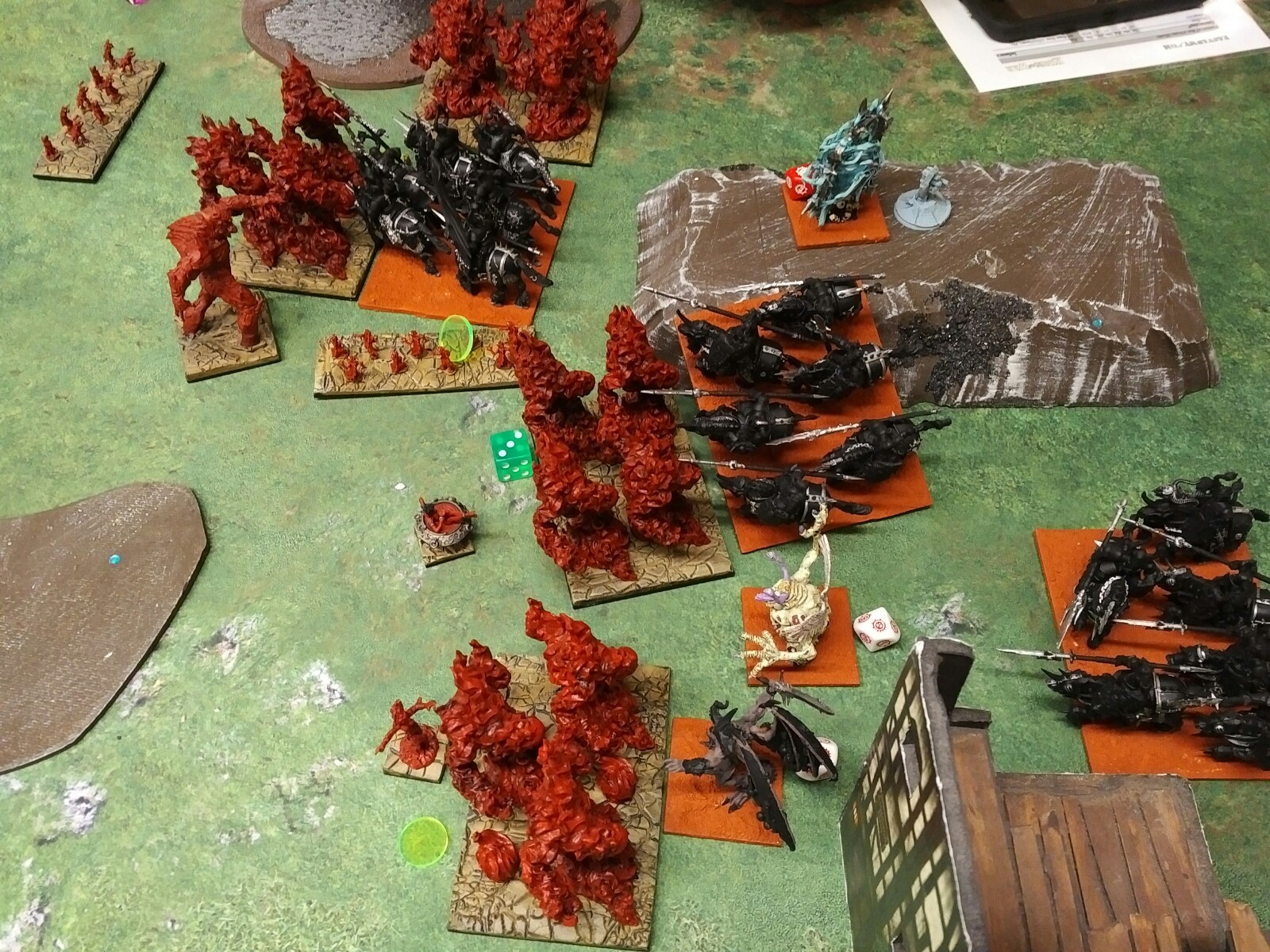 Fire Elementals rage, swarming those Horsemen up top, counter-charging the central Horsemen and heading into the Archfiend for vengeance. The Well comes under fire from the CLOFD and the big Mage bane-chants the horde about to slag the Archfiend. 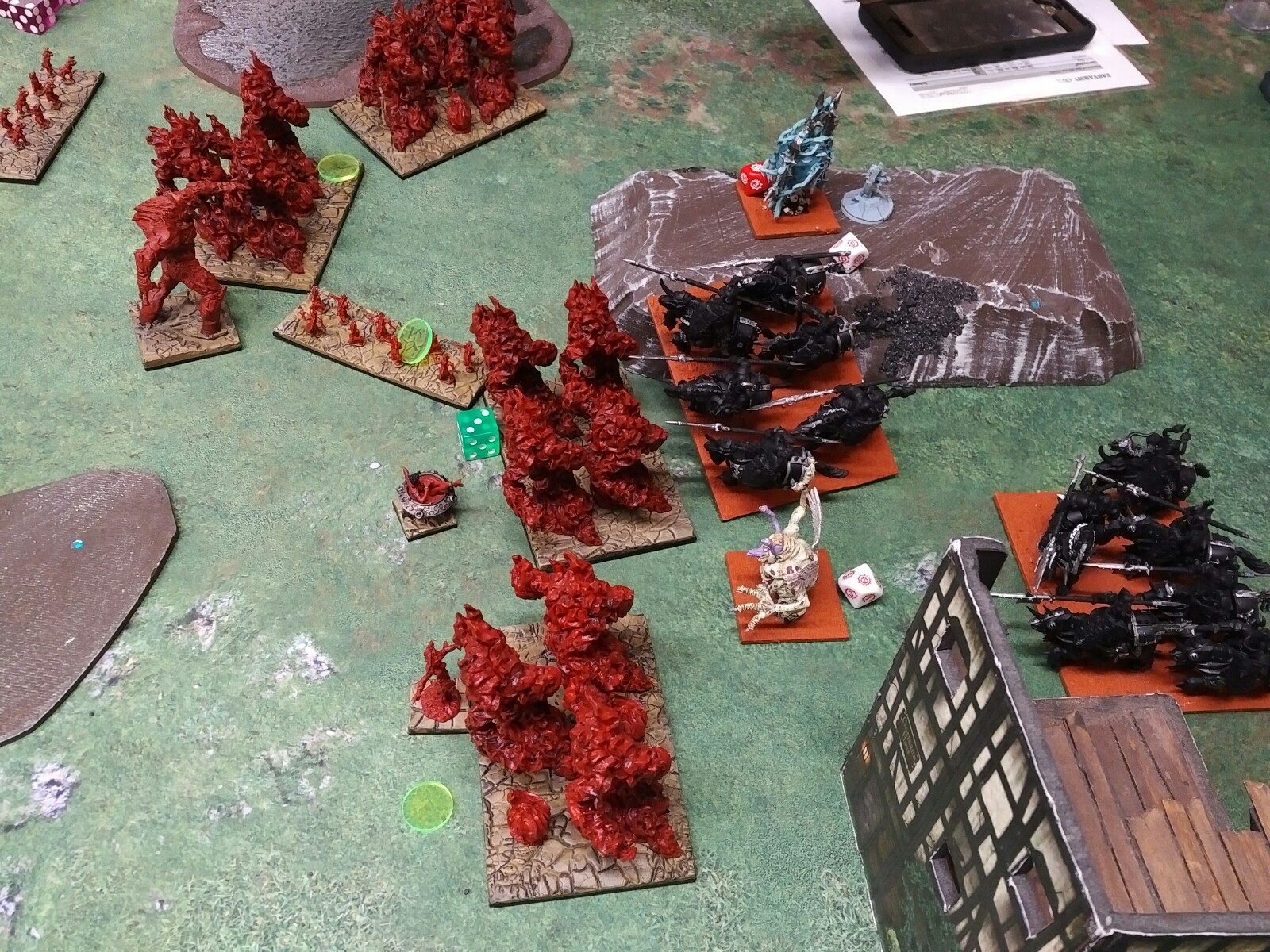 The Archfiend and the surrounded Horsemen get pulped. The central Horsemen merely get batted around. 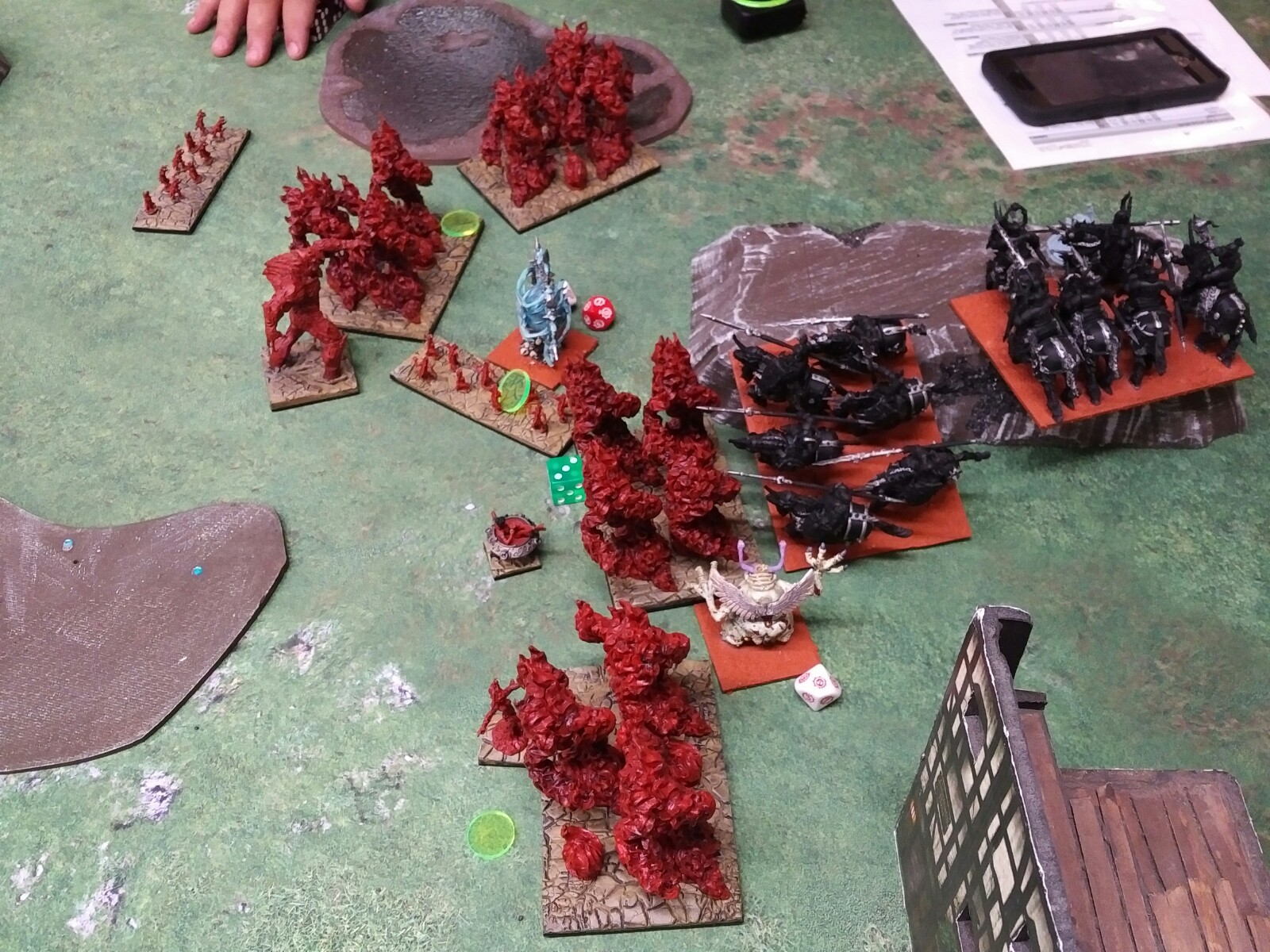 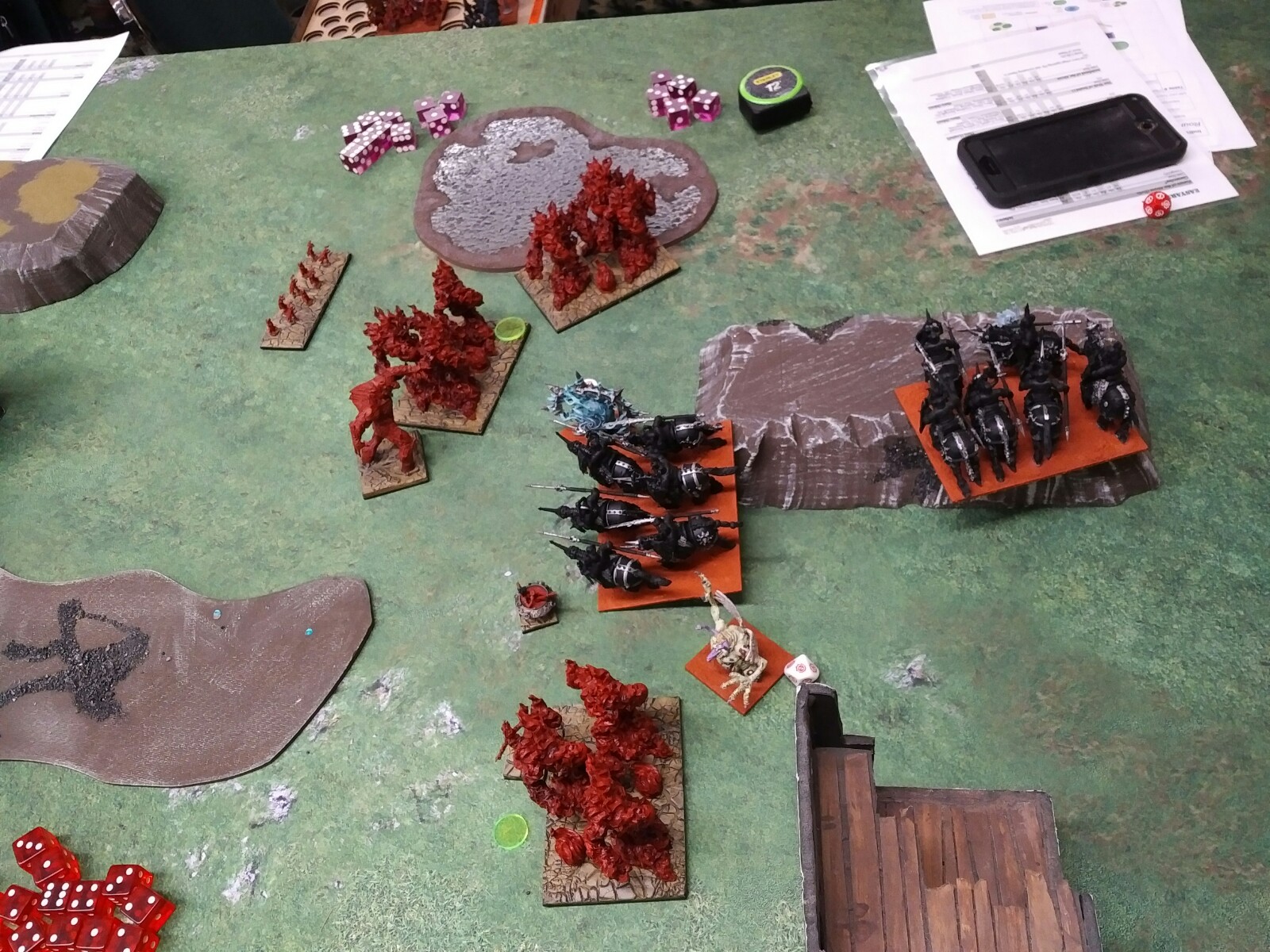 A thrilling success: Sprites are eaten, healing the Well in the process, and the Lord + Horsemen disperse the Nv 19 Fire horde. 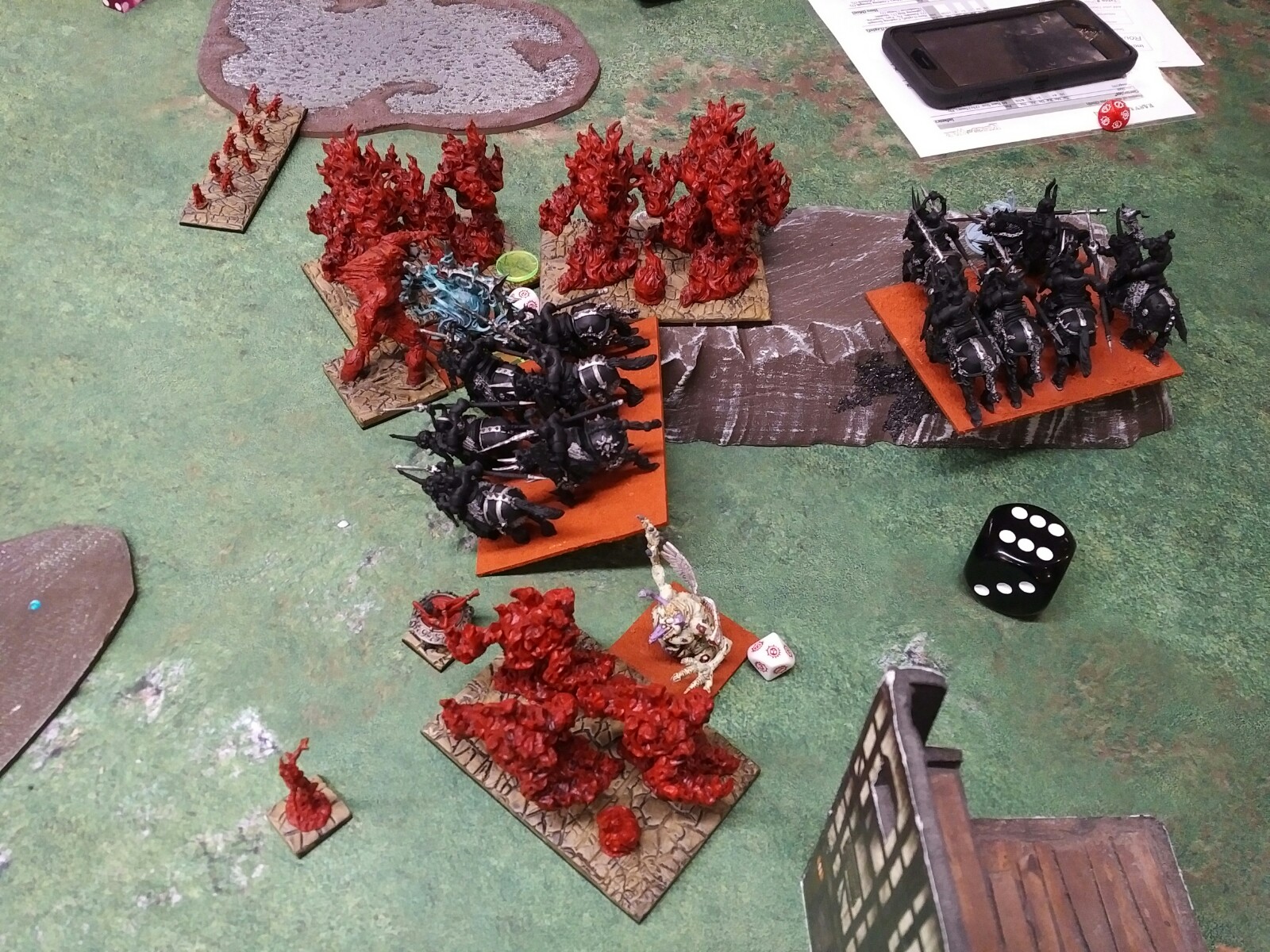 Bloodfire snaps shut on the remnants of the Abyssals, CLOFD + flanking Fire horde grabbing the Well, another Fire horde flanking the Horsemen, and yet more Fire Elementals charging the Lord for another round. 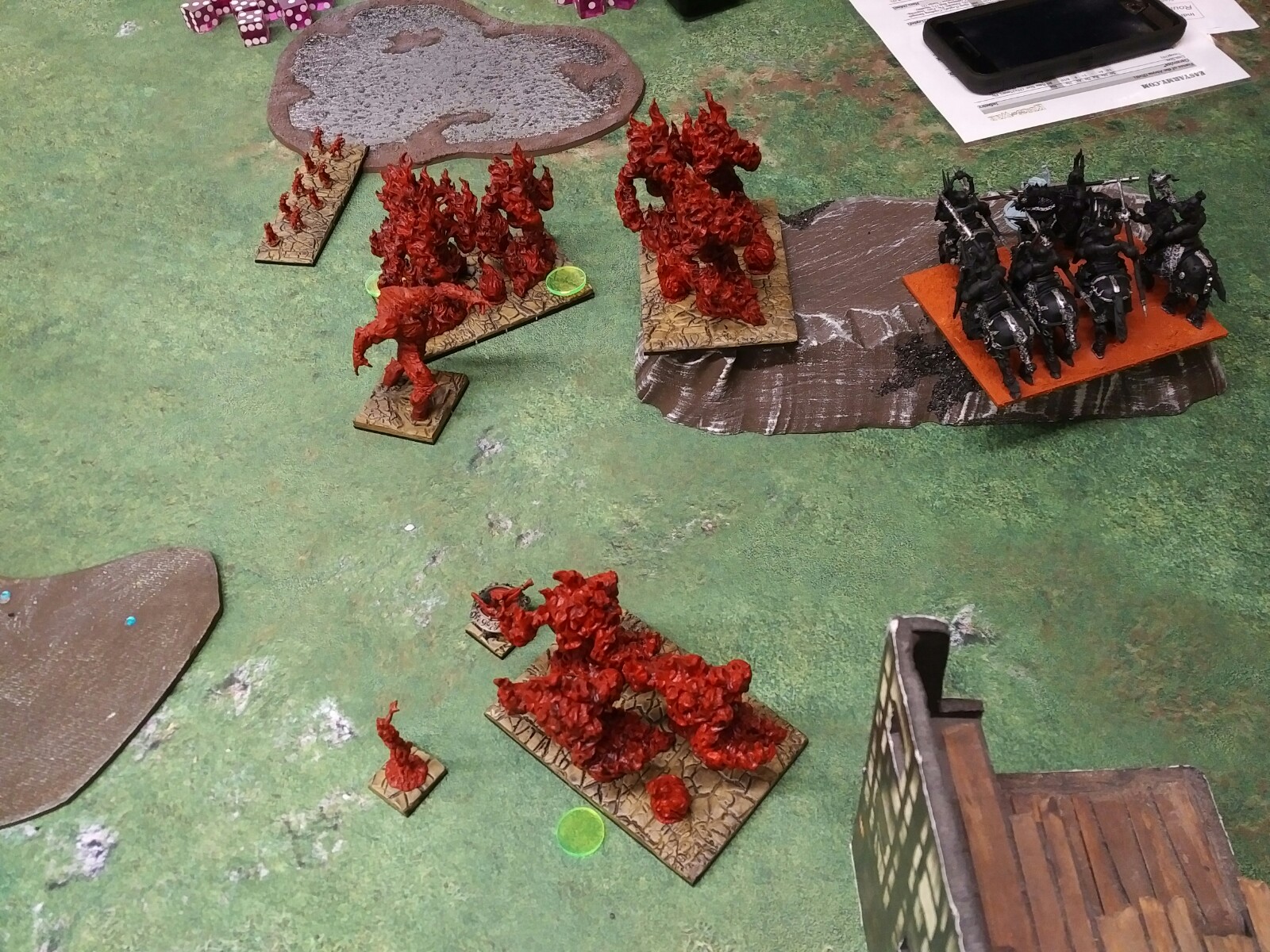 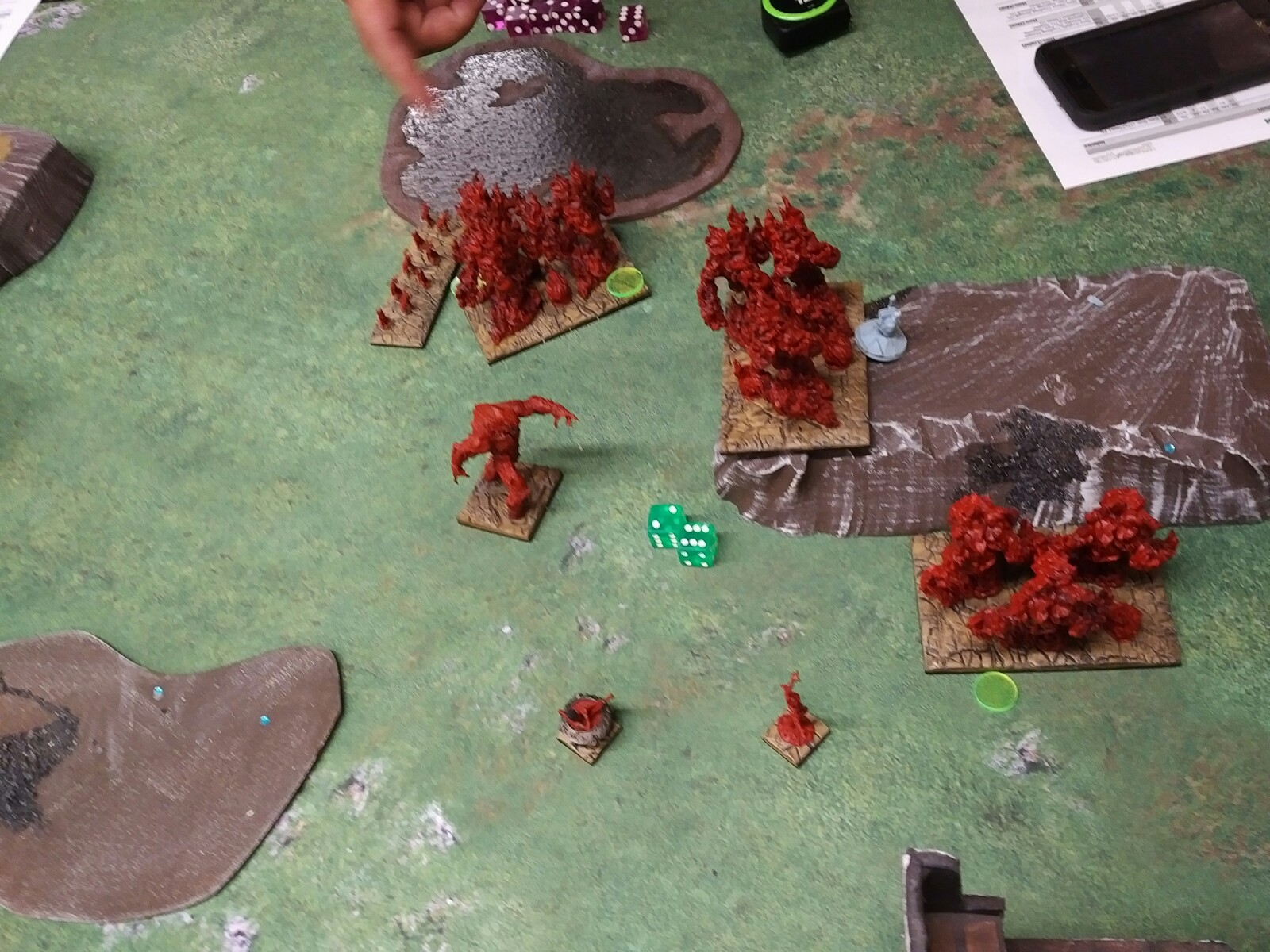 Turn 7 happens! The final Horsemen charge the Fire horde with the Wells token, doing a respectable 8 damage but bouncing. They get flanked + fronted by Fire Elementals and melted to slag.

And big wins for all of Team Cuddle Time, thanks Beef & Wings!

Up Next: UNPLUGGED RADIO