Coming off that big win we were up against one of our sister clubs teams, which included our clubs fearless leader by a cruel twist of fate! We were probably going to get creamed again but at least it would be at the hands of great gents with pretty armies.

I put myself against Abyssal Dwarfs because a) this dude is the last of the Unplugged Gamers I havent played; and b) I rarely face AD and we more or less do similar things, so should be a proper grind. Also I made the Night Stalkers face each other because I could ;D

We ended up playing Eliminate. Abyssal Dwarfs took the initiative. 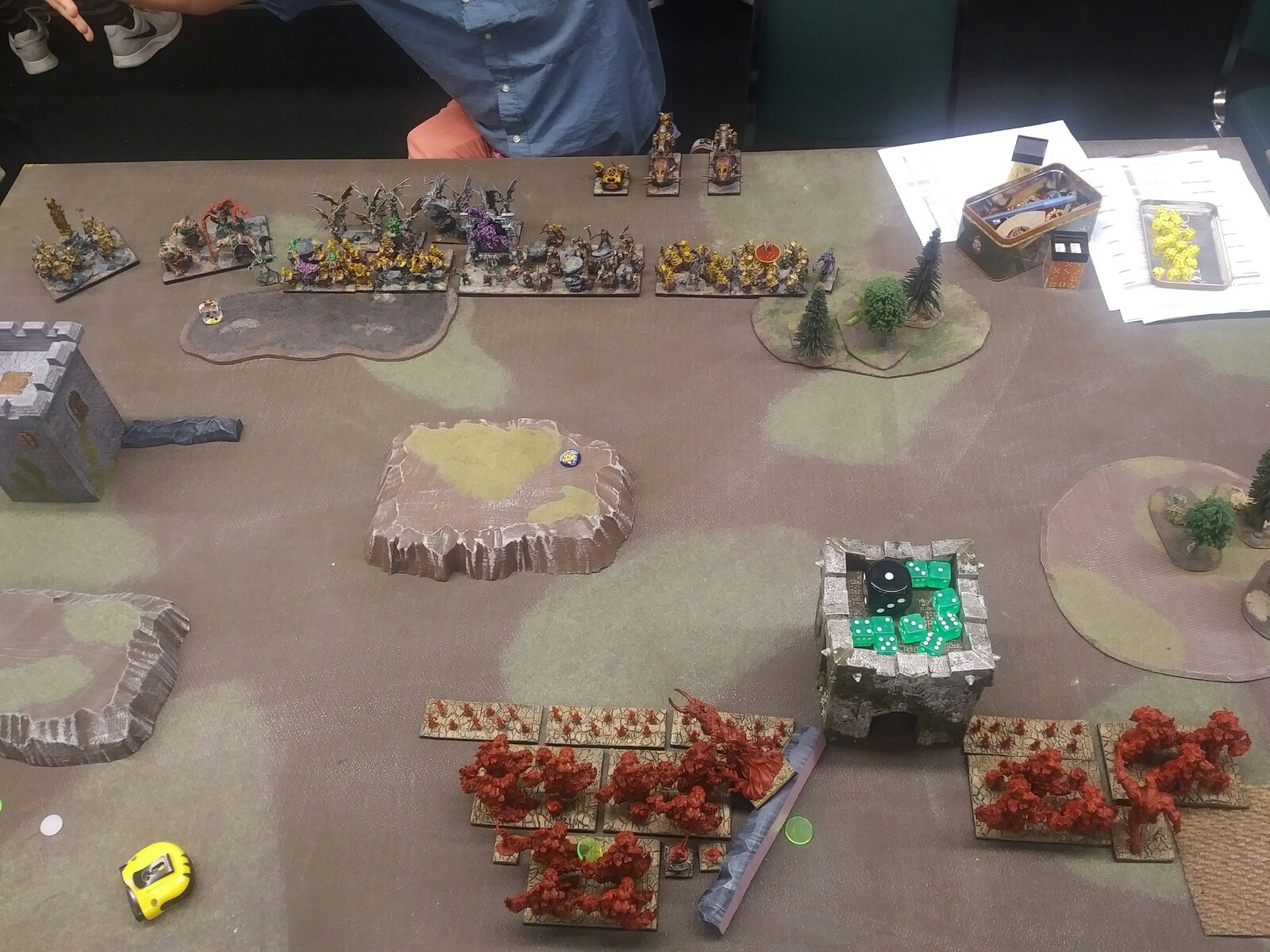 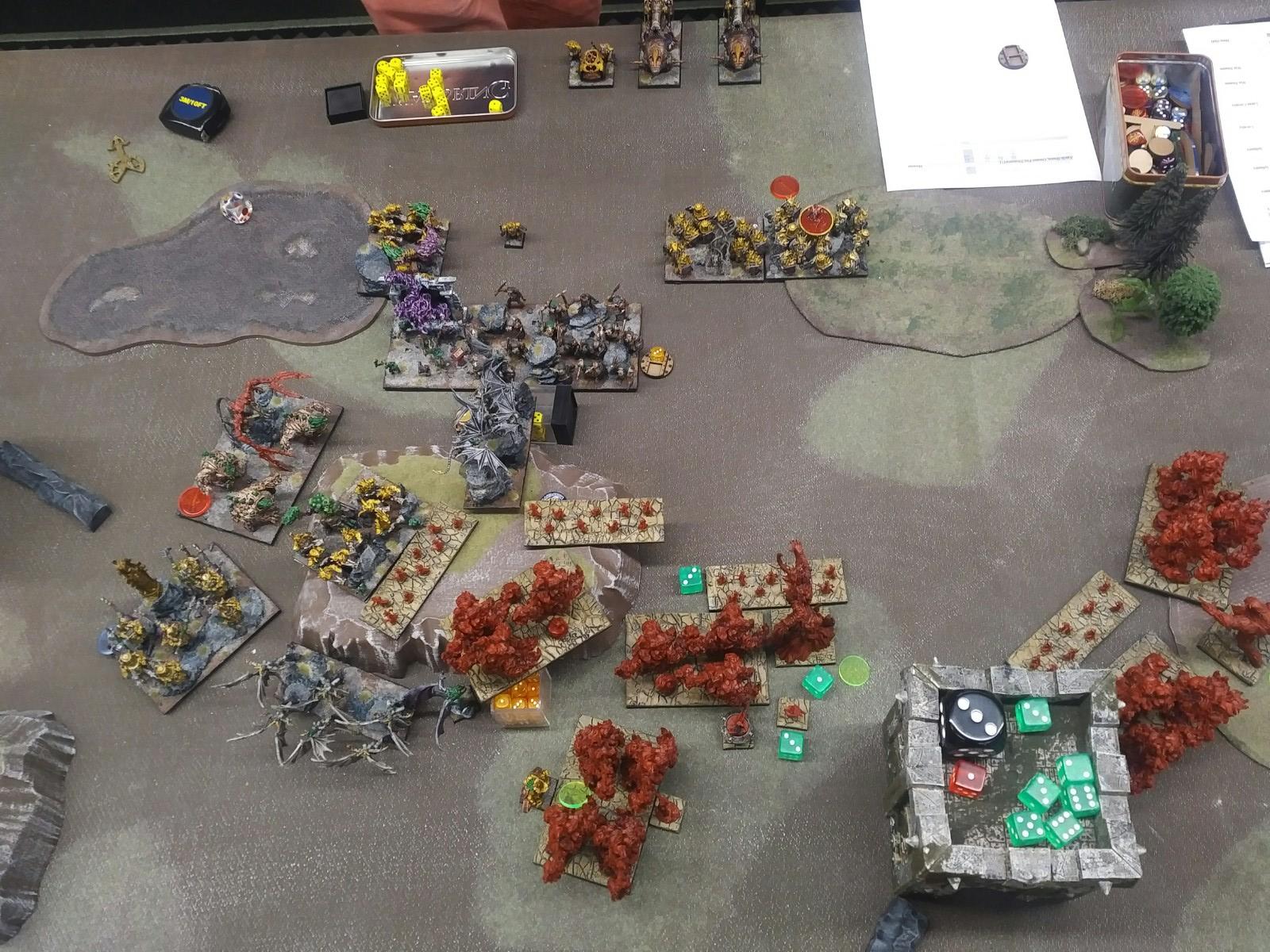 Turn 3 as our flanks swirl into each other. His fast wing is pretty gummed up behind stuff, including Gargoyles that refuse to die, while my heavy right flank has little to do until it crashes into his hordes and obliterates them. Along the way I scoop up a token and he grabs one of mine and sits on the middle, currently giving him the win. 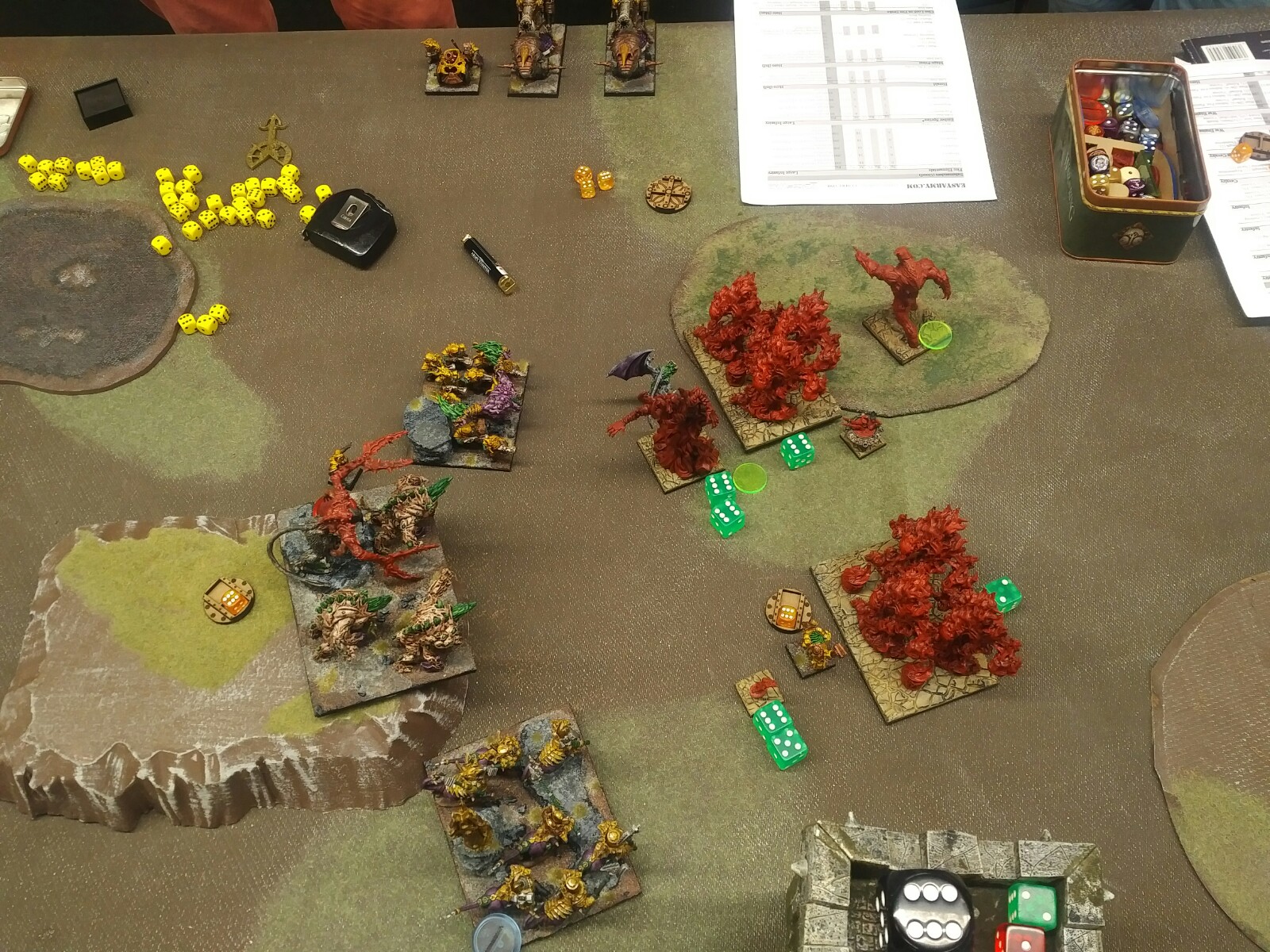 Heres the setup as we go into my Turn 6. The Grotesques in the middle have a token and are sitting on the central objective, however Agnes is my only real active piece since my last Fire Elementals are blocked by individuals. But Agnes is one hell of a piece, and my Mage-Priests are unengaged and ready to rock as well. 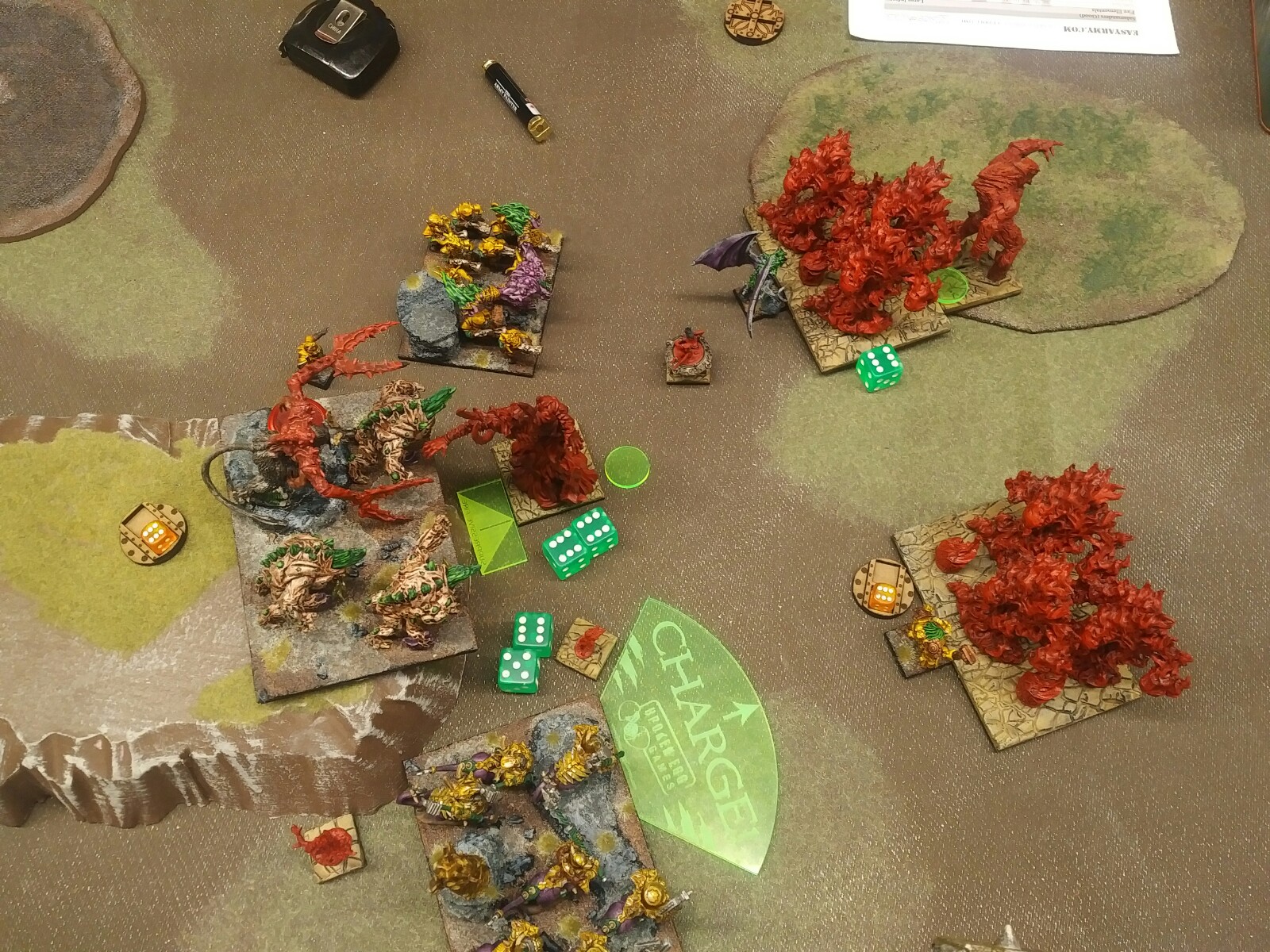 As the hordes pummel the individuals, the girls descend on the Grots. Fireballs are nice and all, but its Agnes death ray that brutalizes the mega cav up to 16 damage. 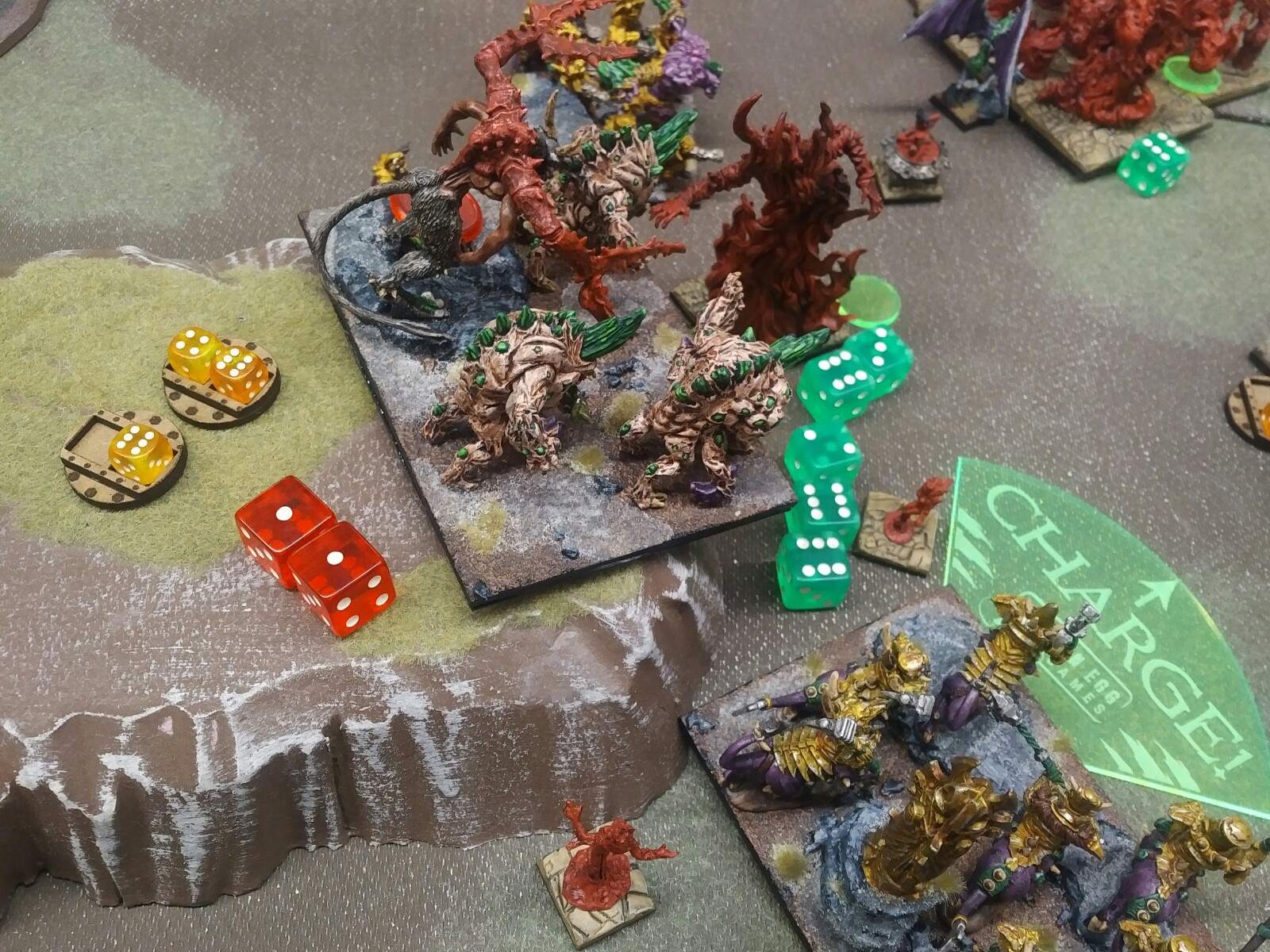 Yep. Snake eyes and Ive lost the game despite the hail mary. BUT THEN THERES A TURN 7! 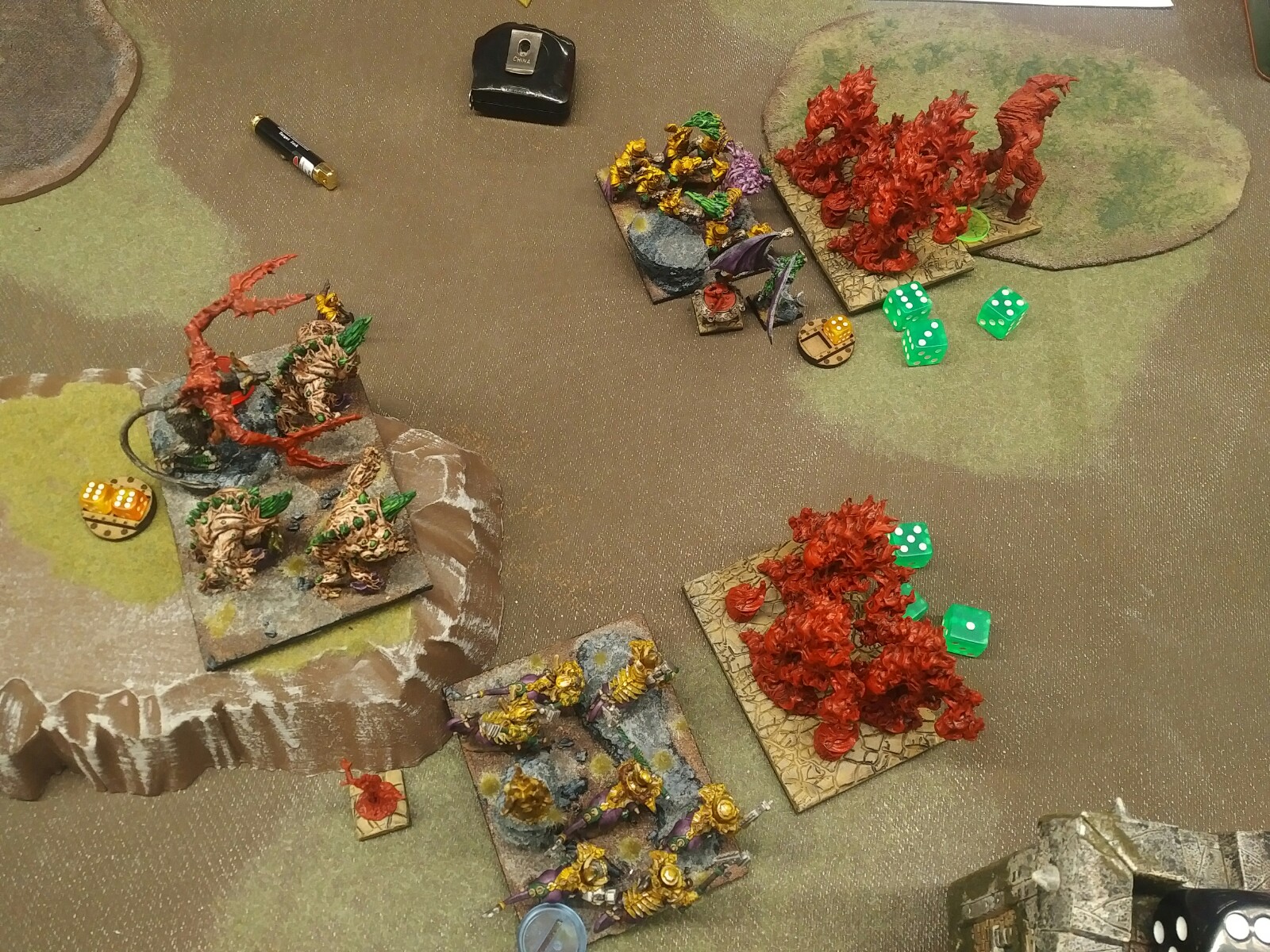 This is after his turn – the lower Fire horde is so far forward because it ate the Overlord and overran. The Grots toppled Agnes and backed up, while the units try to mess with the Elementals for no luck.

In response the lower Fire horde murders the Halfbreeds out of spite, the upper ones faff against the Decimators and Basusu absorbs the CLOFDs aggression and continues to be a beast.* While I gained some needed points in that Turn 7 it was still a . . .

*The reason youre not seeing the CLOFD + surviving Priest blast the mangled Grots (12 wounds after regen) is because I stupidly corkscrewed past the Halfbreeds into the Grots with the lower Fire horde and proceeded to smash them in combat, winning the game UNTIL another Unplugged dude asked WTF I was doing and I realized Fire Elementals cant fly :( And were disordered if they could 😛 So we rolled that combat as against the Halfbreeds, without backing the game out to shooting, which would have given me another shot at the Grots, although if Im remembering Eliminate scoring right it wouldnt have mattered as I couldnt put a model on the center point nor one-round the Halfbreeds.

Up Next: JOHN HOLST HAS A POSSE