Final round, now much more awake and having eaten some pizza for gaming power. Up against one of the largely-similar Elves armies, but happily the somewhat sorter range version (Dragon Breaths instead of Bolt Throwers) commanded by Allen. I wasnt real thrilled at the prospect of being shot and drakond into the dirt, but hey ho.

Seems like pretty standard fair for competitive Elves. The Dragon Breath were good to see, as it meant he intended to engage (though most likely theyre in the list for anti-flier work? Or other hyper-aggro builds).

Fifth round was Occupy, with his primary marker waaaaay in the back left of my zone. Enjoy holding that, whatever noble Elf is sent to push the button. Bloodfire won initiative or might have been given it. 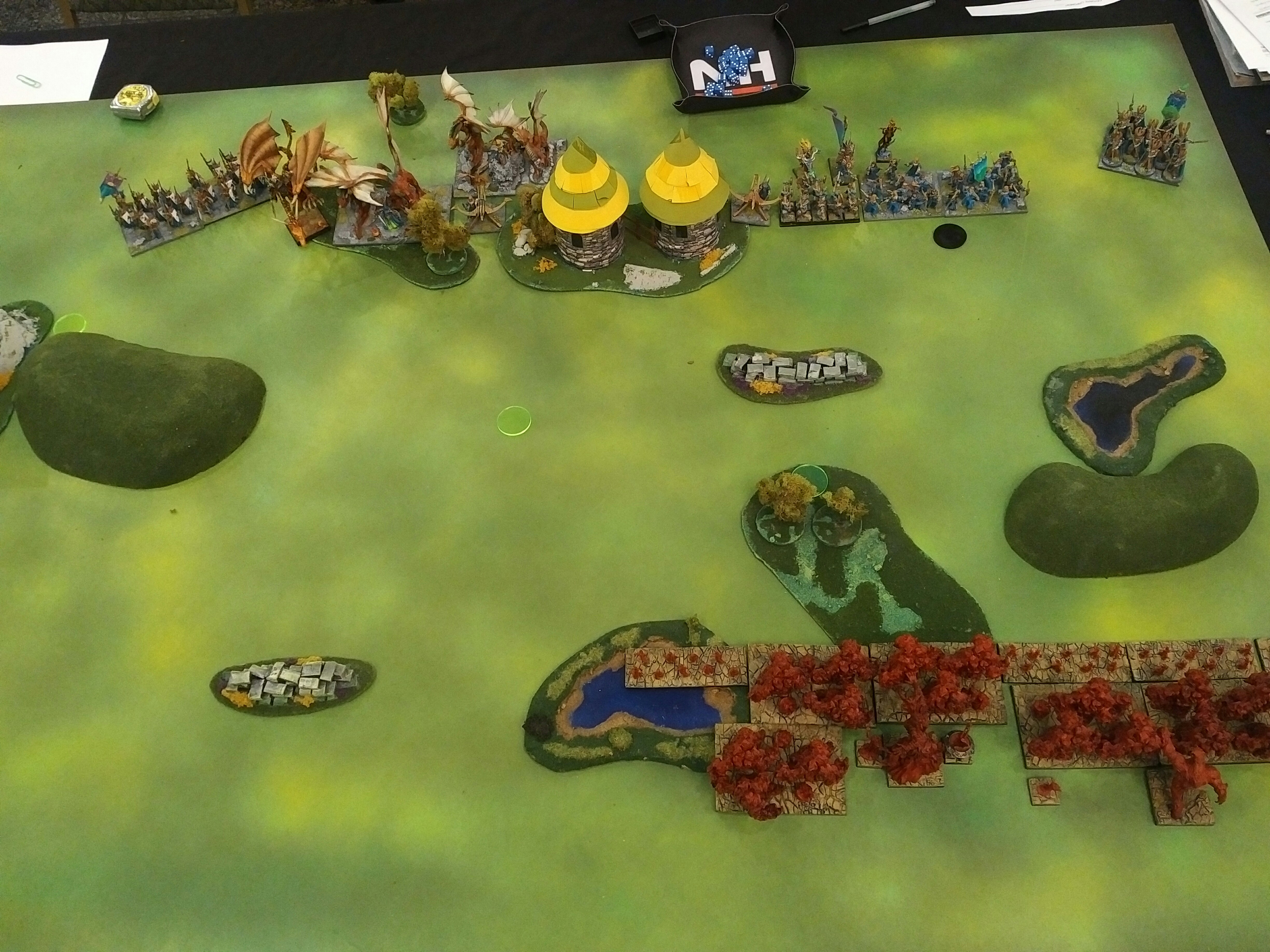 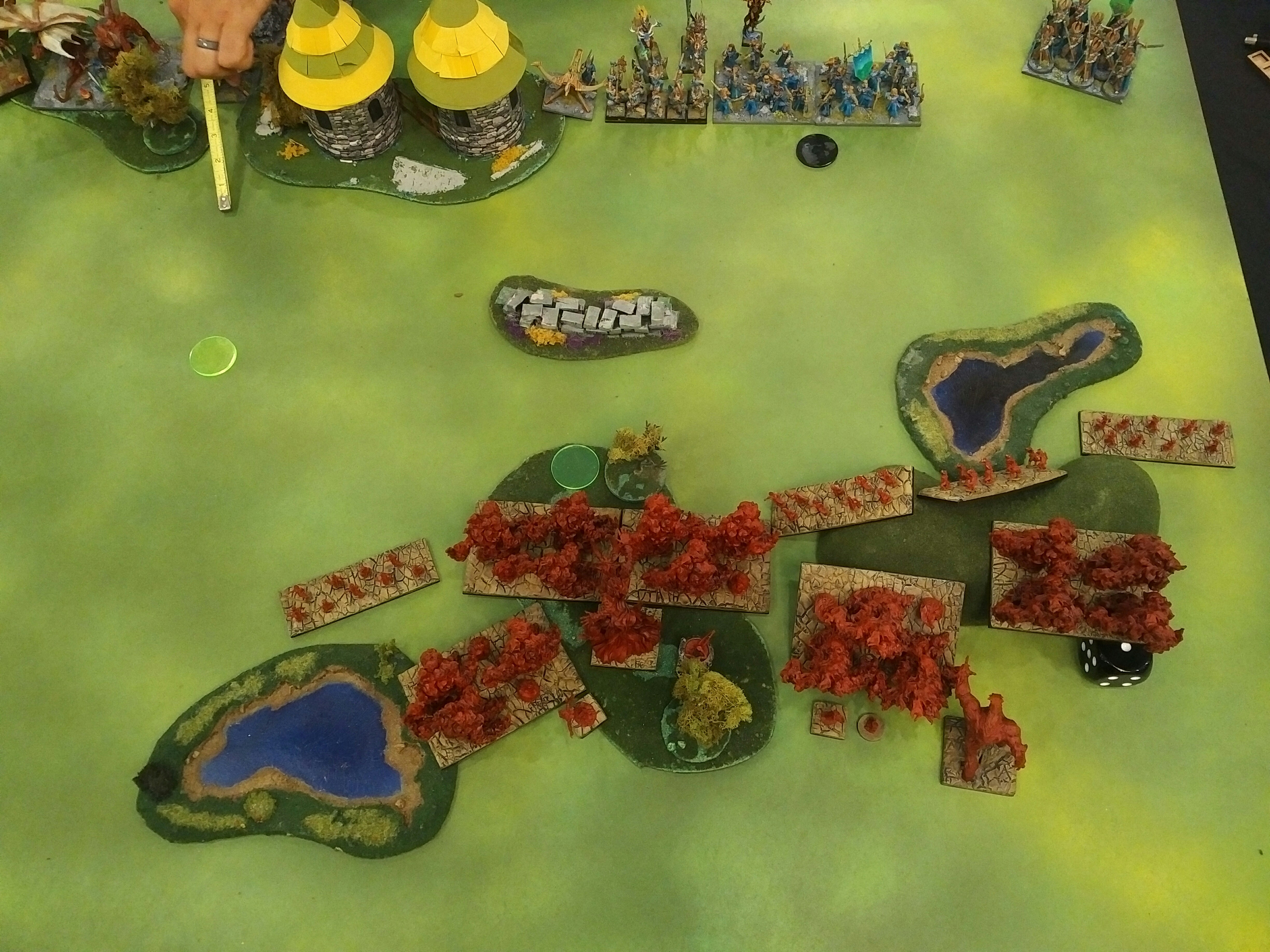 The Bloodfire ambles out once more. Terrain is hugged, hills are annoying. 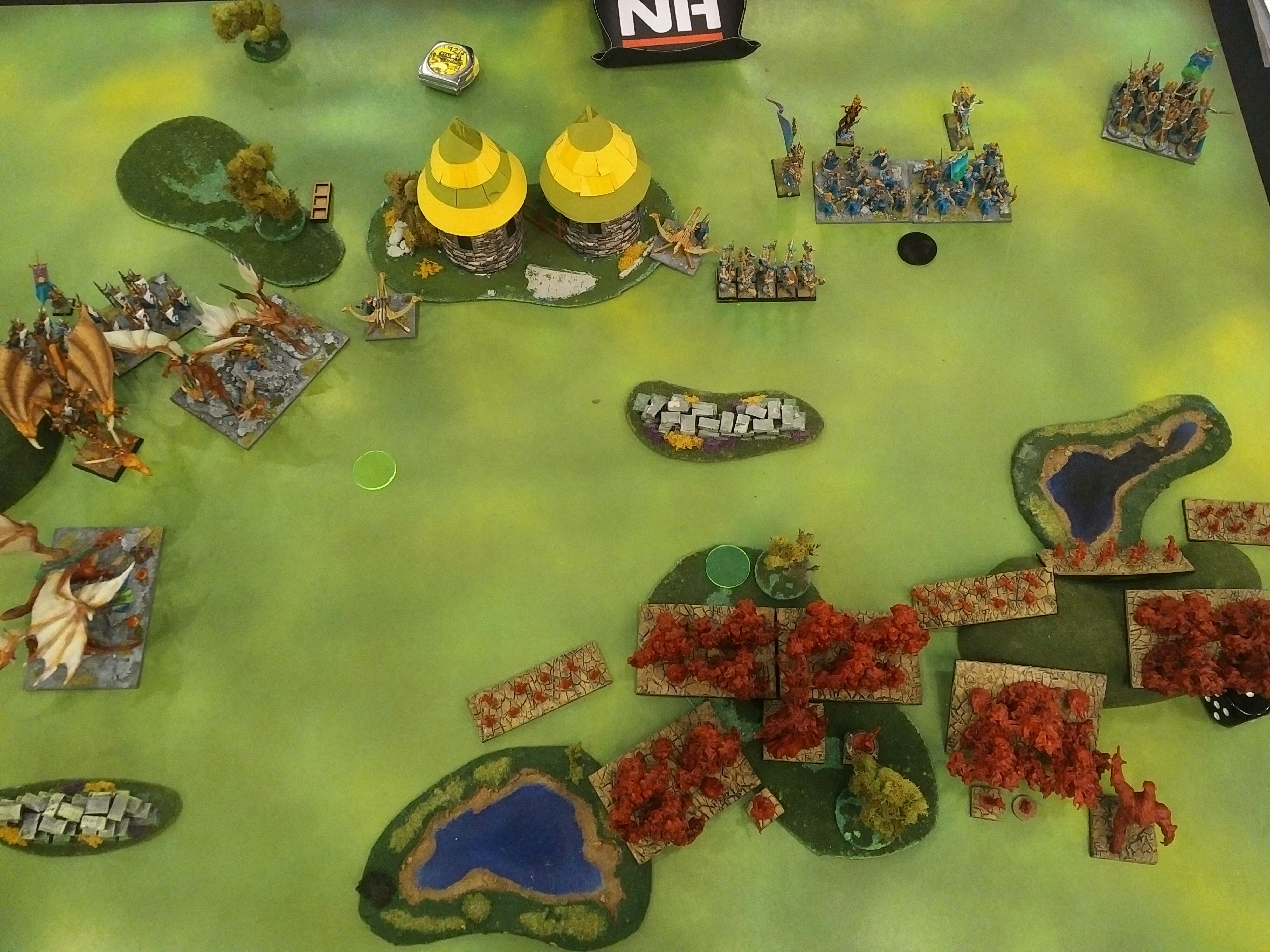 Bam! Elves Turn 1 and the elementals are already corralled. Thats how its done, kiddos. A unit of Sprites is murdered by the nimble archers on the right. 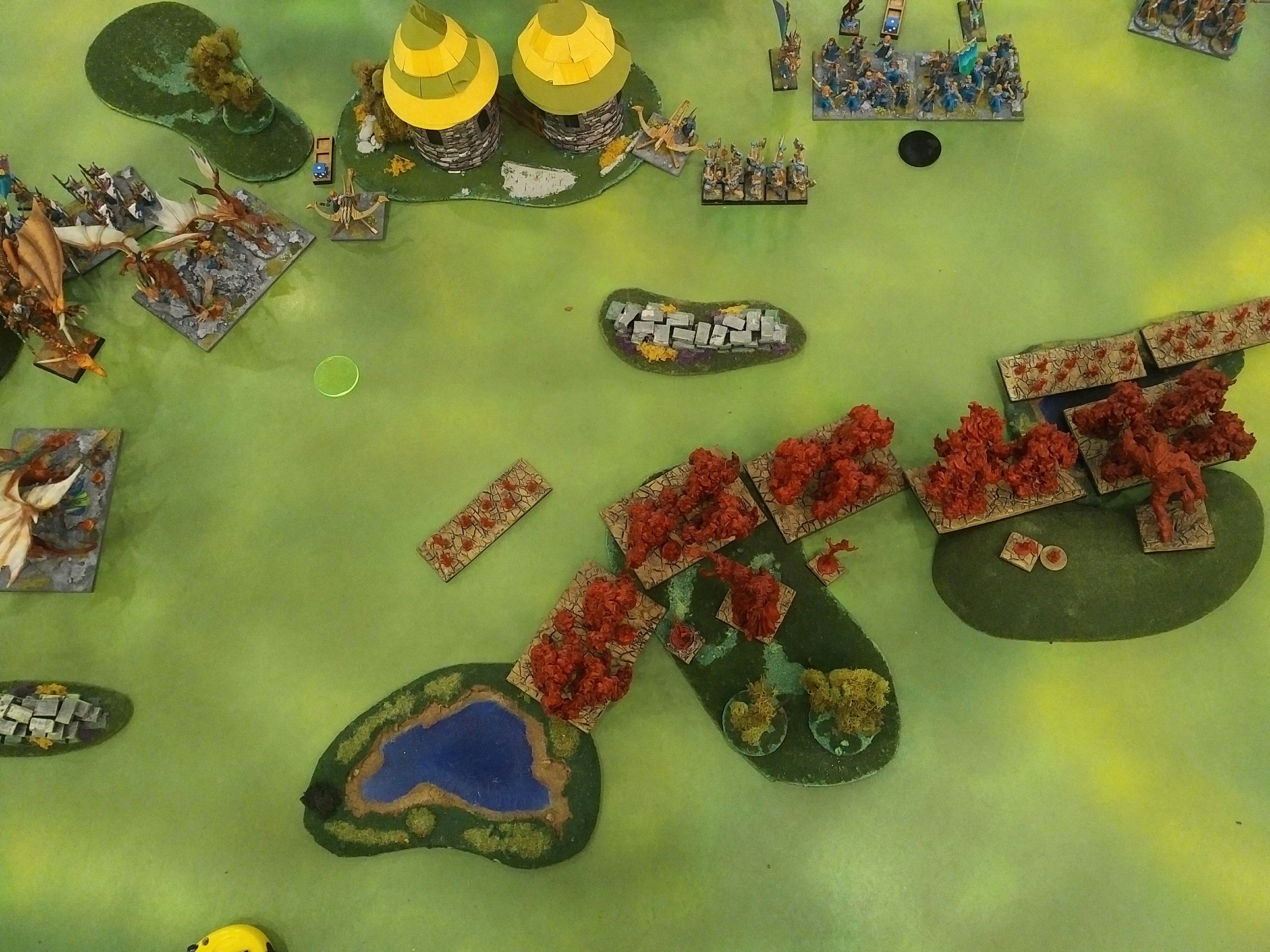 The red battleline bows out, as it does, continuing to keep terrain in the way. Sprites apply light damage to the left Dragon Breath and right Archer horde. 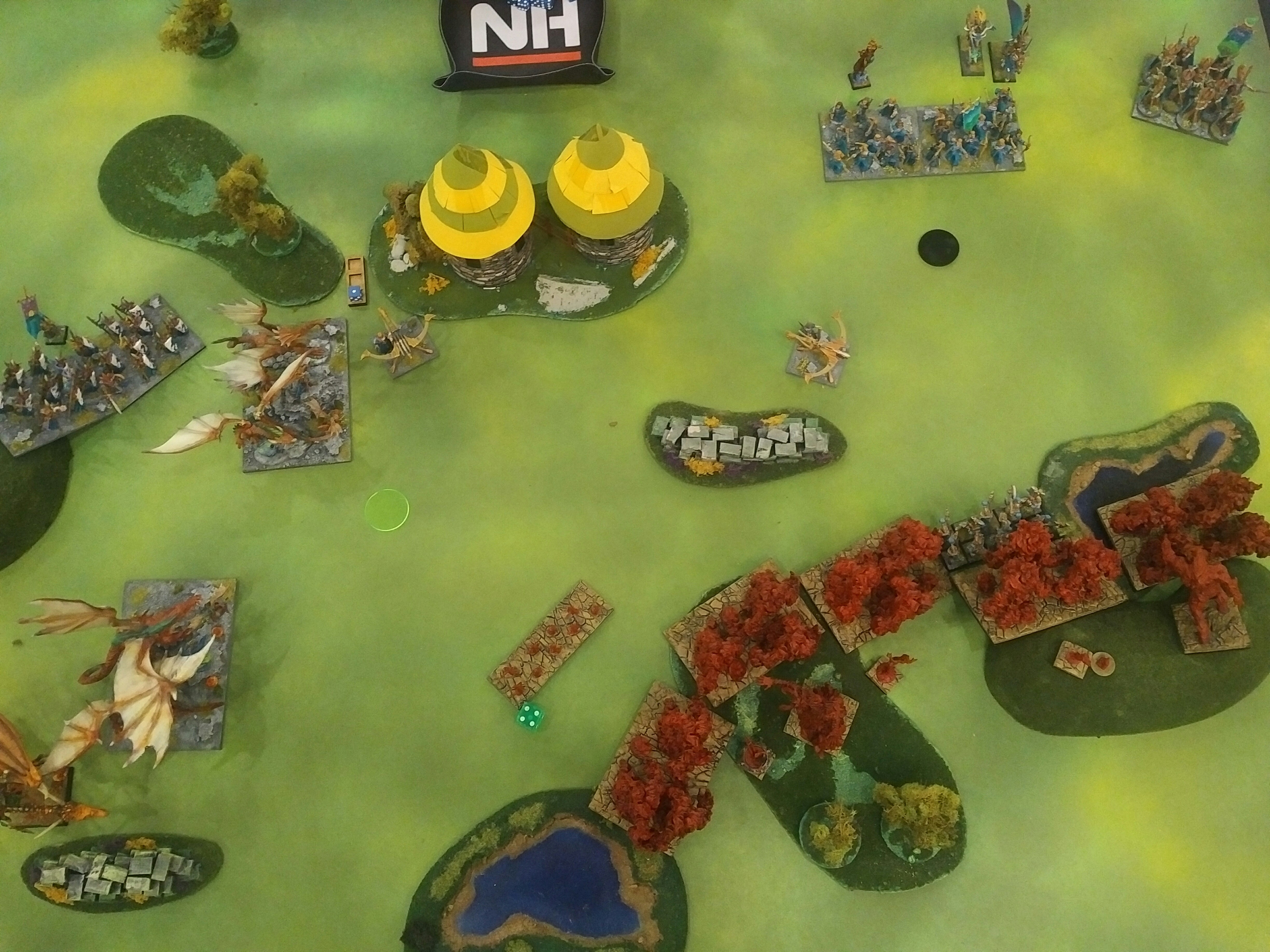 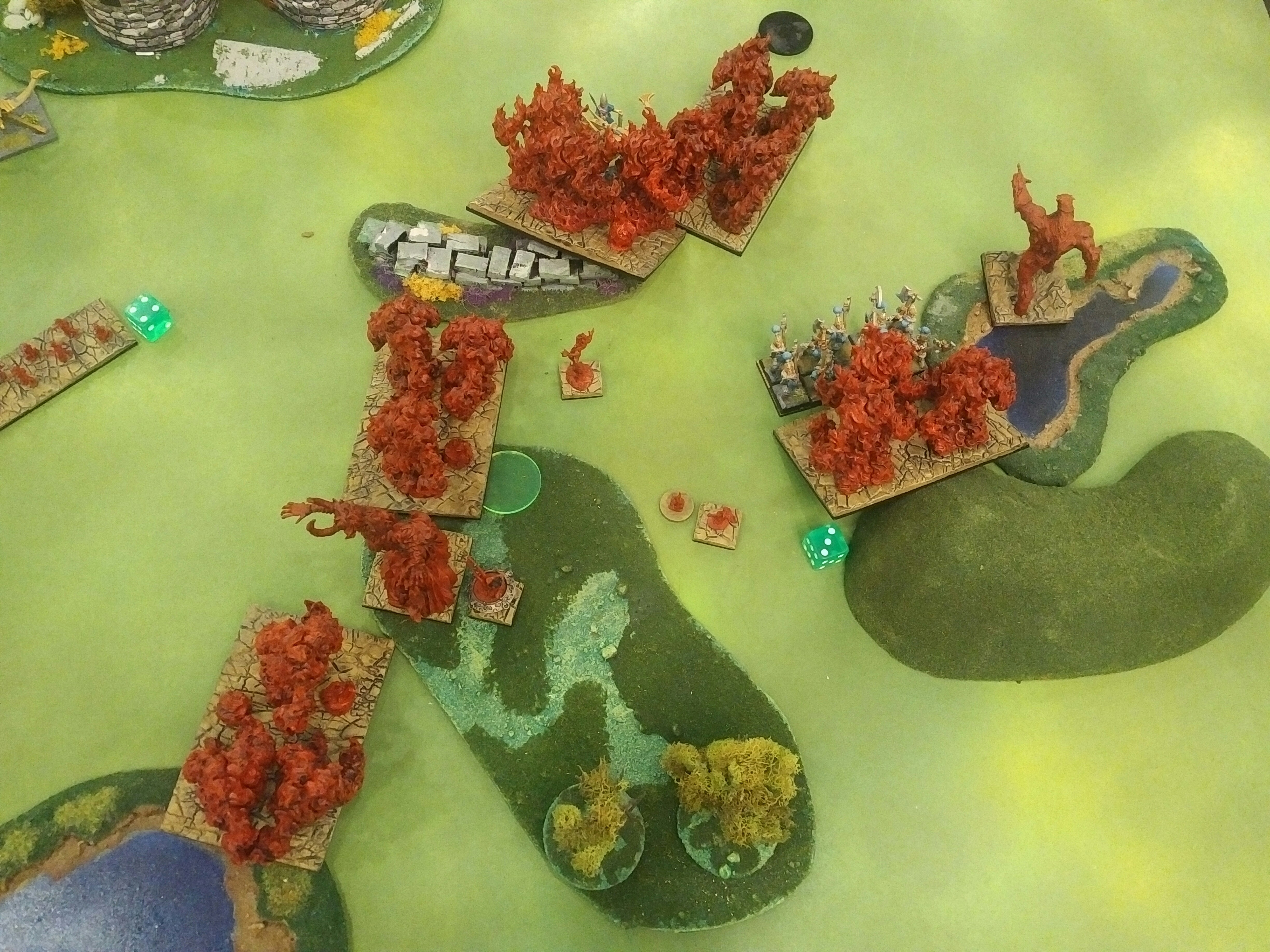 Bloodfire 3, and Im too tired to keep waiting his flank out. Two Fire hordes charge into a Dragon Breath and the engaged Fire horde counter-charges the Palace Guard. Sprites move up and breath on the other Dragon Breath, wavering it, and the bane-chanted CLOFD lathers the nimble Archers with some damage. 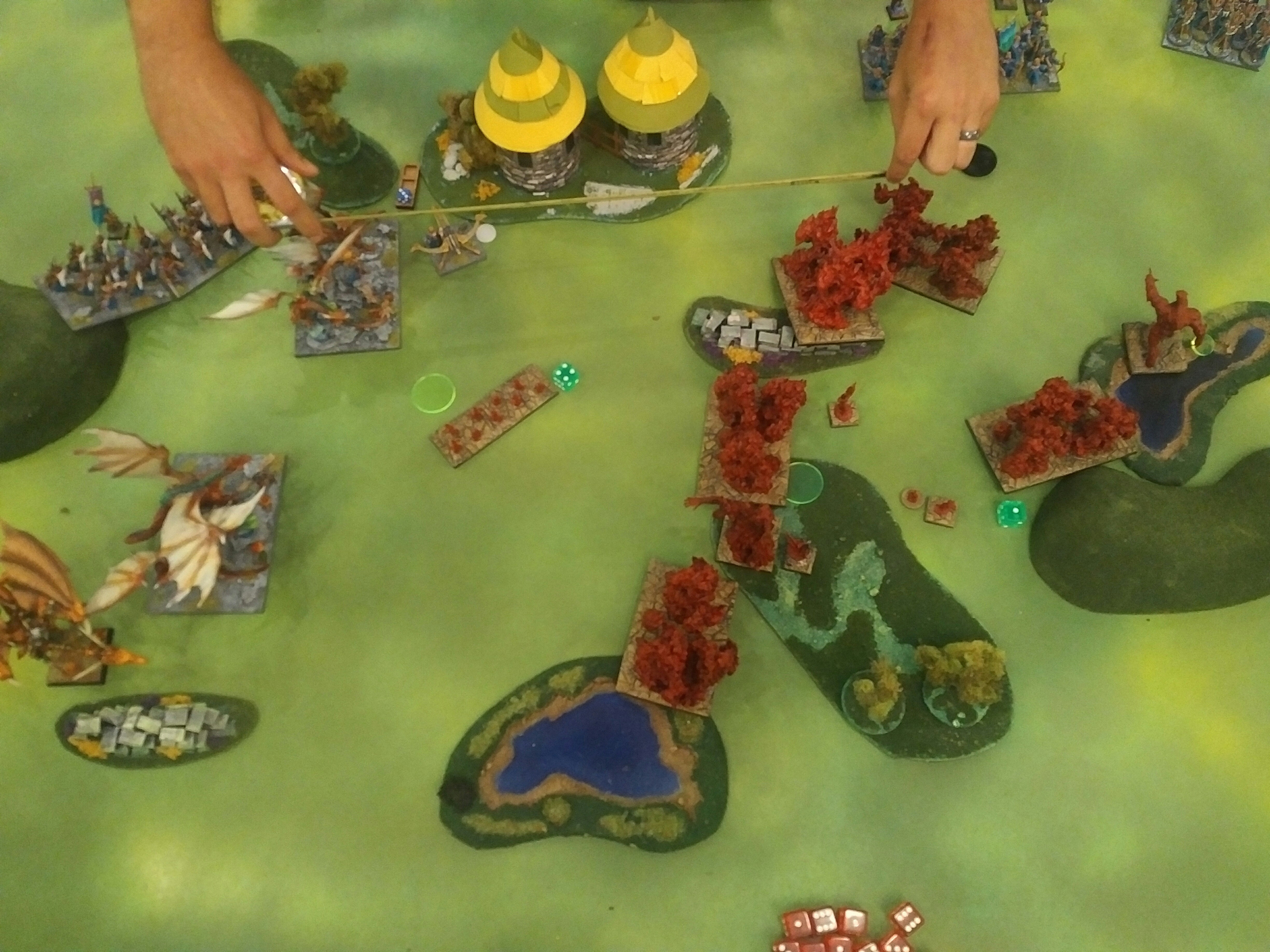 After combats. I struggled a bit with how to reform those Fire hordes off of the Dragon Breath, and ultimately reformed them thusly. He immediately charged the Drakon Riders in their flank, at which point I paused the game:

BS: So yea, thats obvious. Can I ask if there was a better way to reform?
A: You probably would have faced them both towards the Drakon. The Palace Guard are out and Im not going to send Archers into their flank.
BS: But would you have charged one in the front?
A: Probably not.
BS: Right. Lets grind.

Part of me felt dumb for the flank (on my more expensive horde too), but part of me knew that I needed to trade out a piece if we were going to come to grips with enough time for me to retaliate. I needed him to come within 12, and this was by far the easiest way to make that happen. 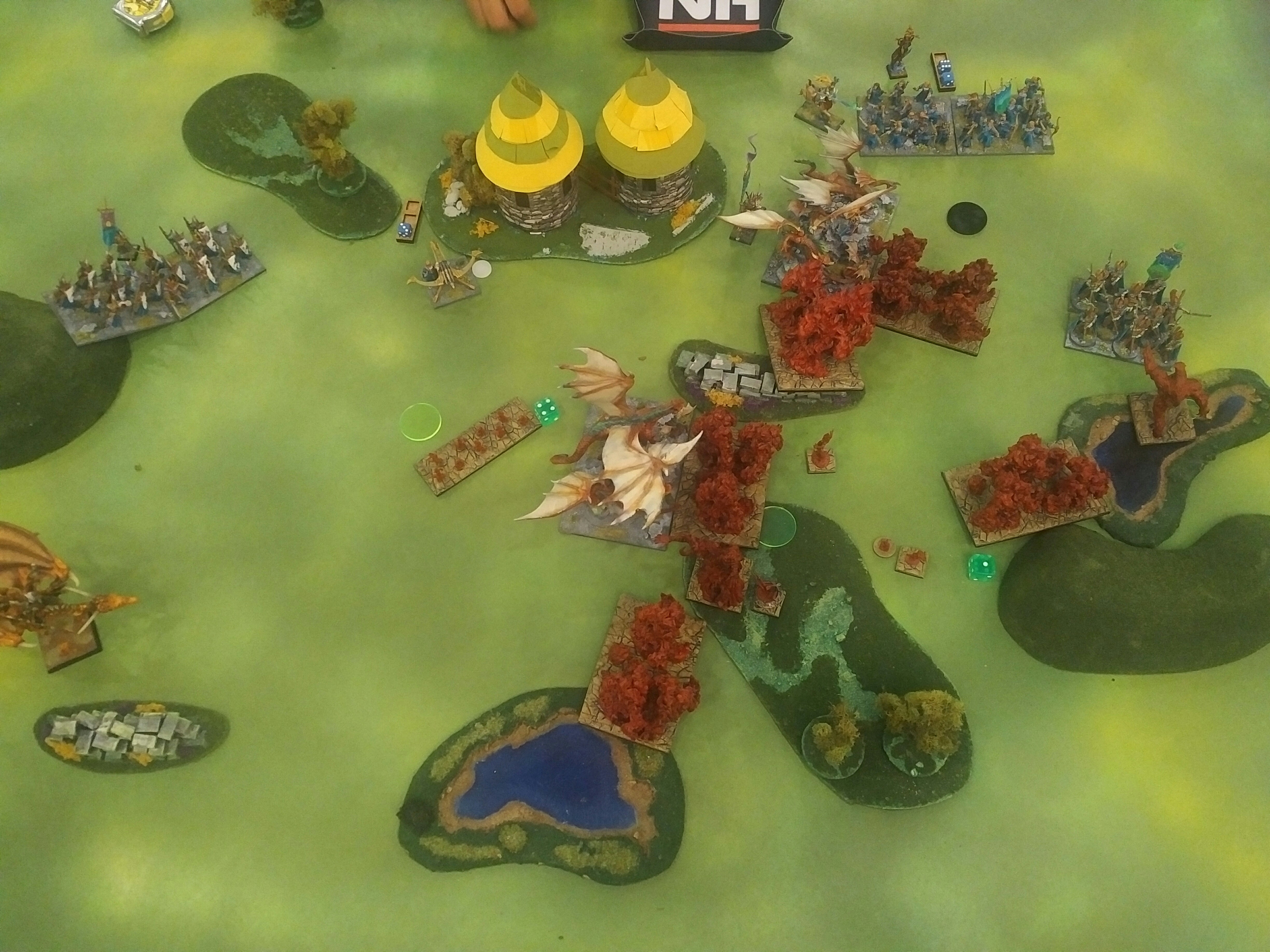 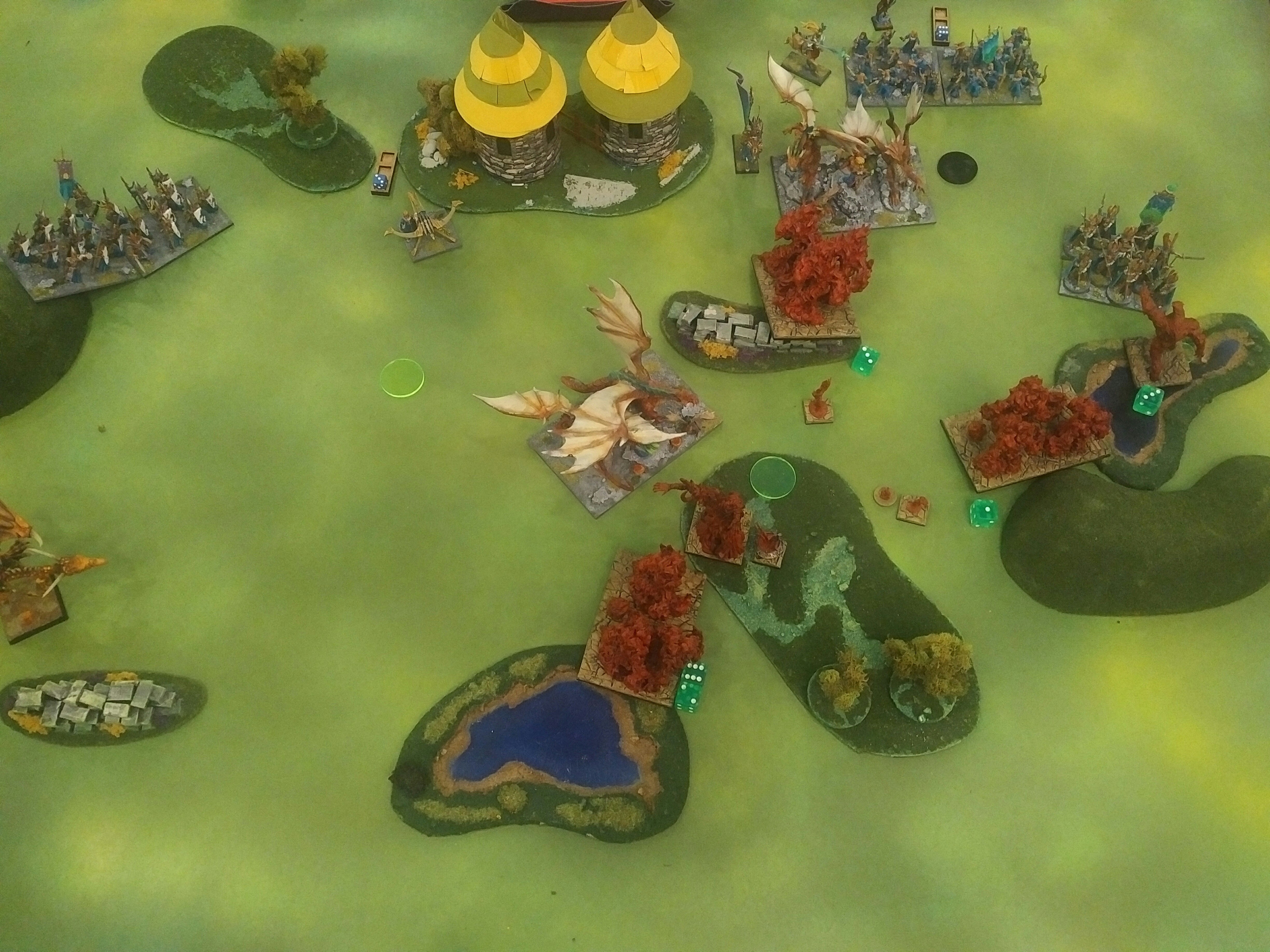 Piercing Archers slam 8 damage into the leftmost Fire horde, the Dragon fries the last of the Sprites, and the nimble Archers land 3 damage on the CLOFD. In combat, the flanking Drakon rip right through the Diadem horde, as expected. More surprising is the front-charging Drakon landing 12-15 damage and one-rounding a -/18 Fire Elemental horde! (Math says 9 O_O) So I guess I wont be flanking them for great justice. Or at least not the mundane way 😛 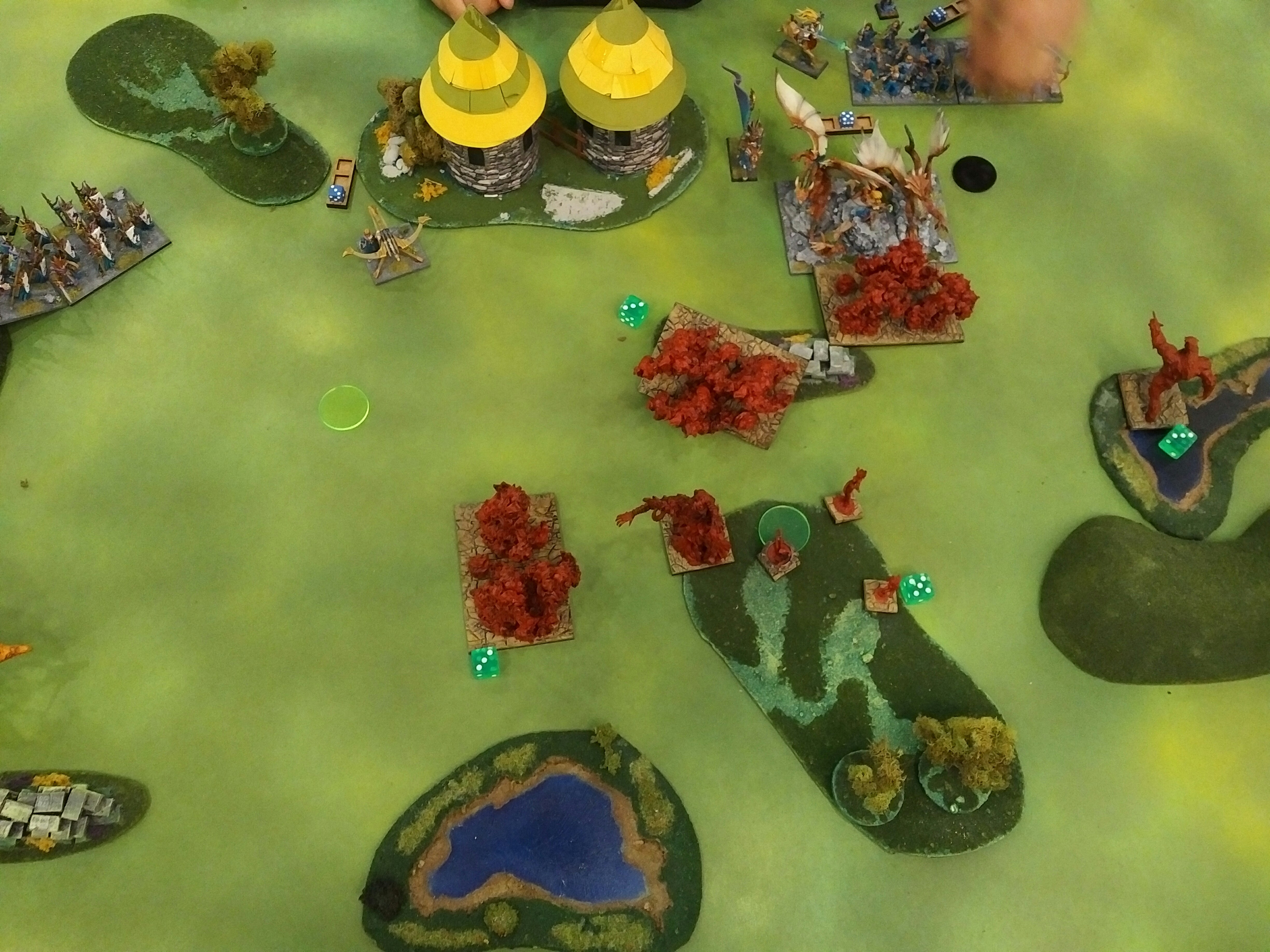 Bloodfire 4: The Elementals Strike Back! A fresh Fire horde tackles the Drakons up top while Agnes hits the lower ones in the front. A walk, pivot and surge later, and theres a Fire horde in their flank as well ;] The CLOFD deigns to charge the Palace Guard, preferring to shoot them with 16 unhindered breath attaks, thanks – which is super effective, routing the unit! The double-teamed Drakon get pulverized, however the ones in the Elf half of things take a gentle 5 damage for no result. (Also the martyr Mage-Priest cleans up the surged Fire horde a bit.) 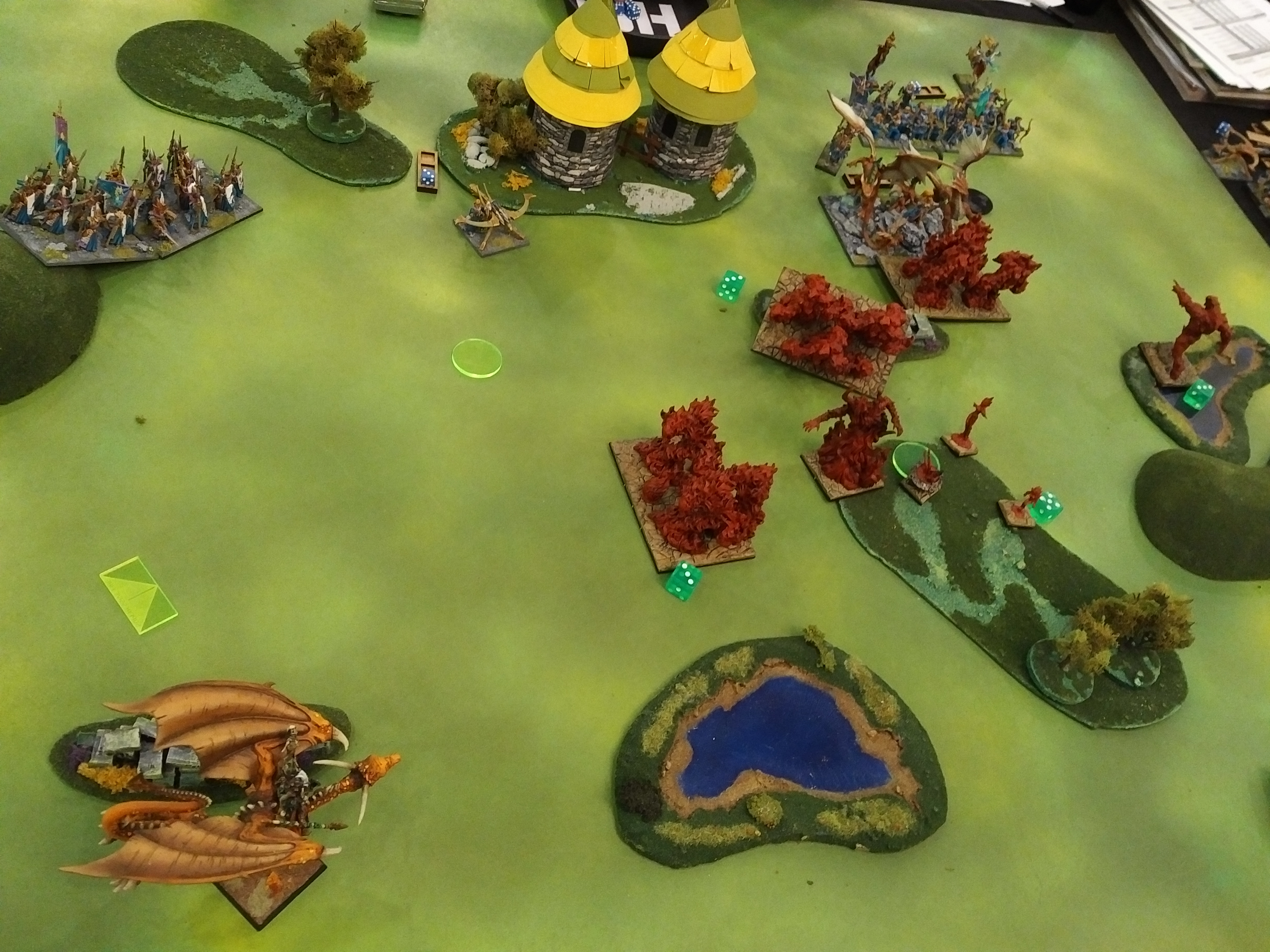 Elfish vengeance strikes hard and fast. The leftmost Fire horde, fresh from flanking the Drakon Riders, is hit with Dragon Breath, Dragon fire and piercing arrows, and is thoroughly routed. The CLOFD likewise suffers the attention of Elven Archers, but the pond hes been hanging out keeps the damage low (6 total). The surviving Drakon Riders, bane-chanted back to 3+/3+, rolling out of the box again, sinking a bonkers 12-15 damage and one-rounding the Fire horde that had charged them. What is going on with these dudes?! 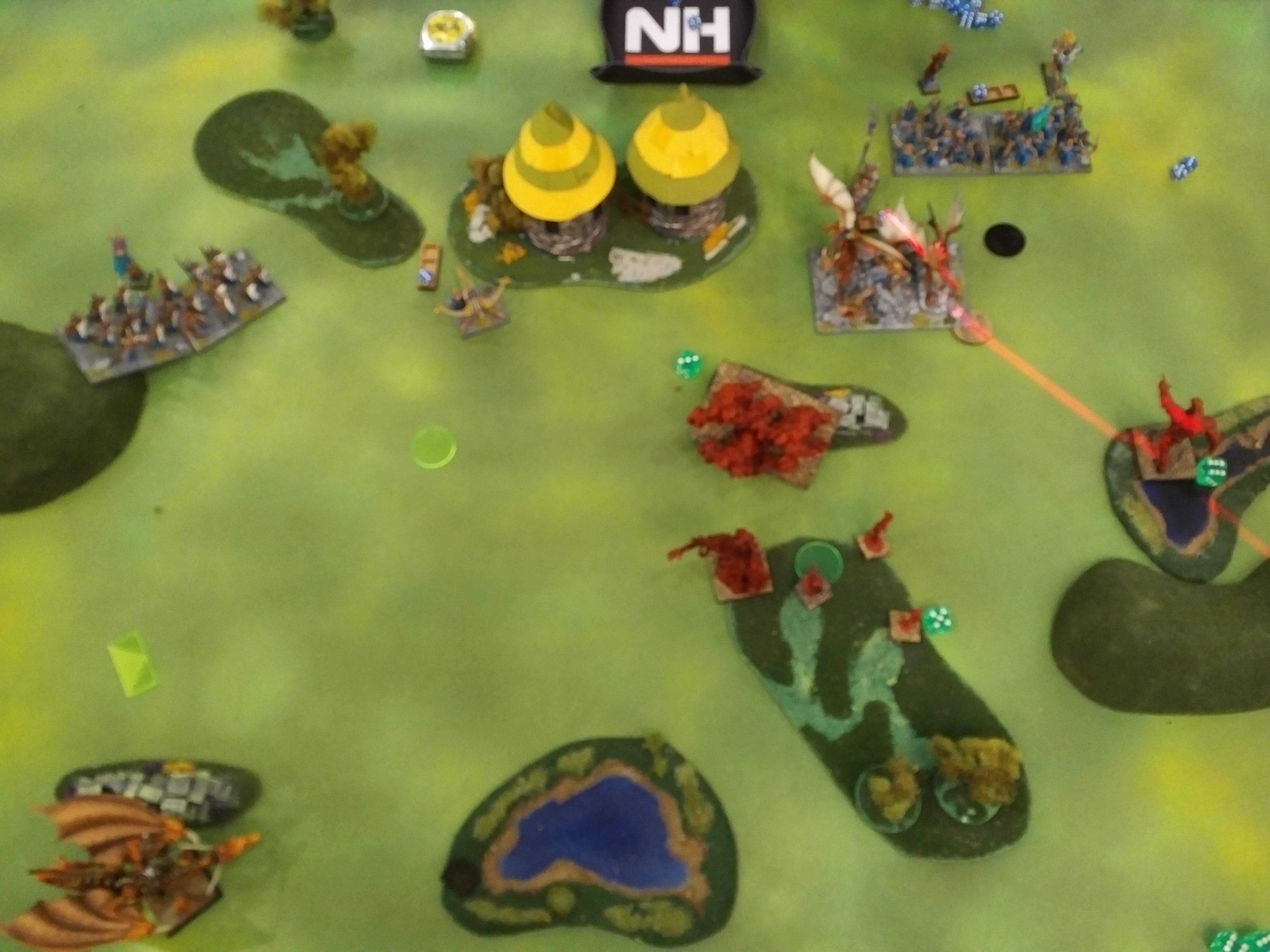 Aye, thats a flank then! 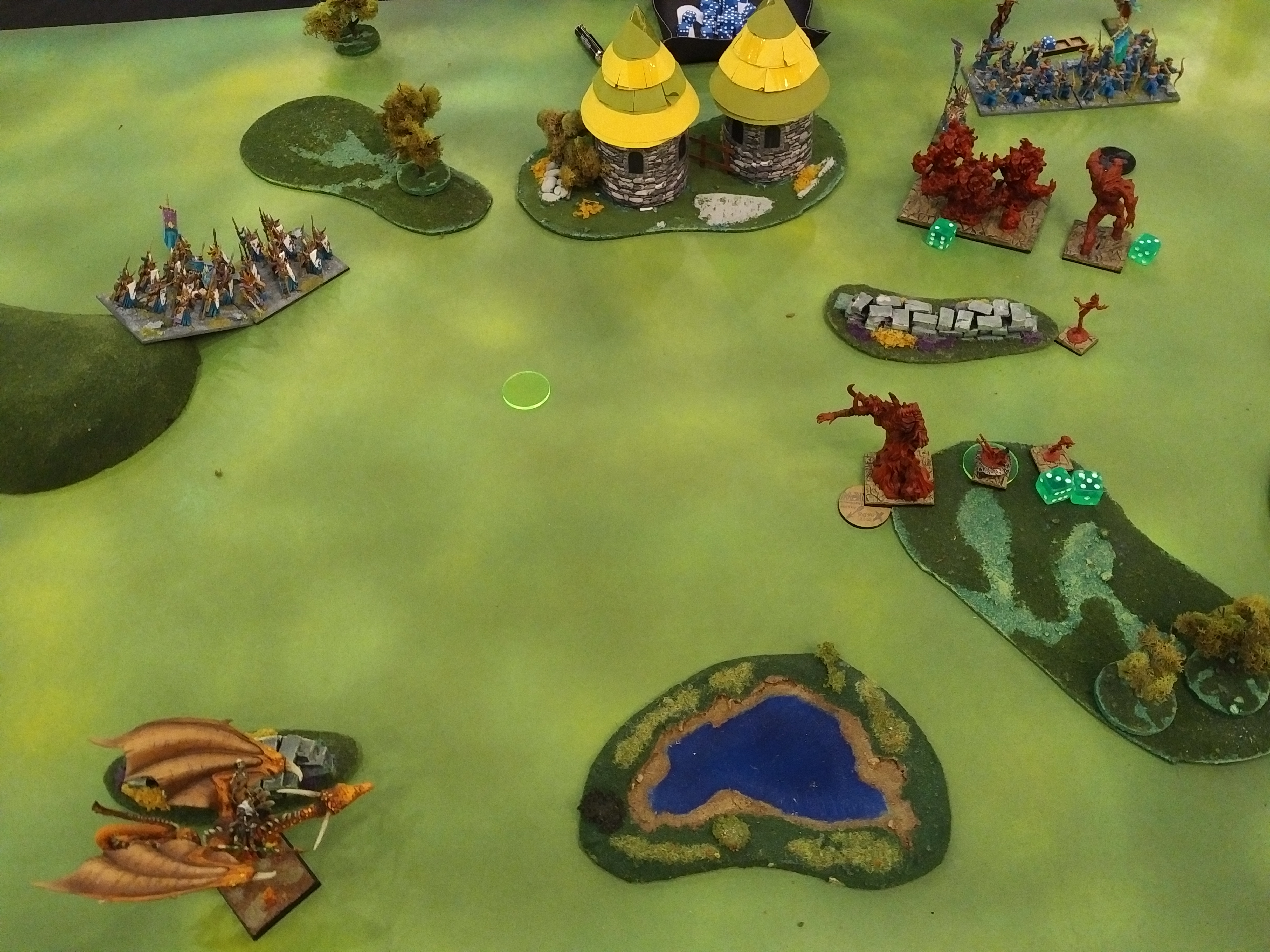 Turn 5, looking pretty light on the ground. The last of the Fire Elementals hits the rampaging Drakon in the front with the CLOFD tackling them in the flank (both hindered). After a bit of healing, the Fire horde fluffs a bit but the Clan Lord picks up the slack, shattering the unit at long last. Agnes and her support staff consolidate on a secondary objective. 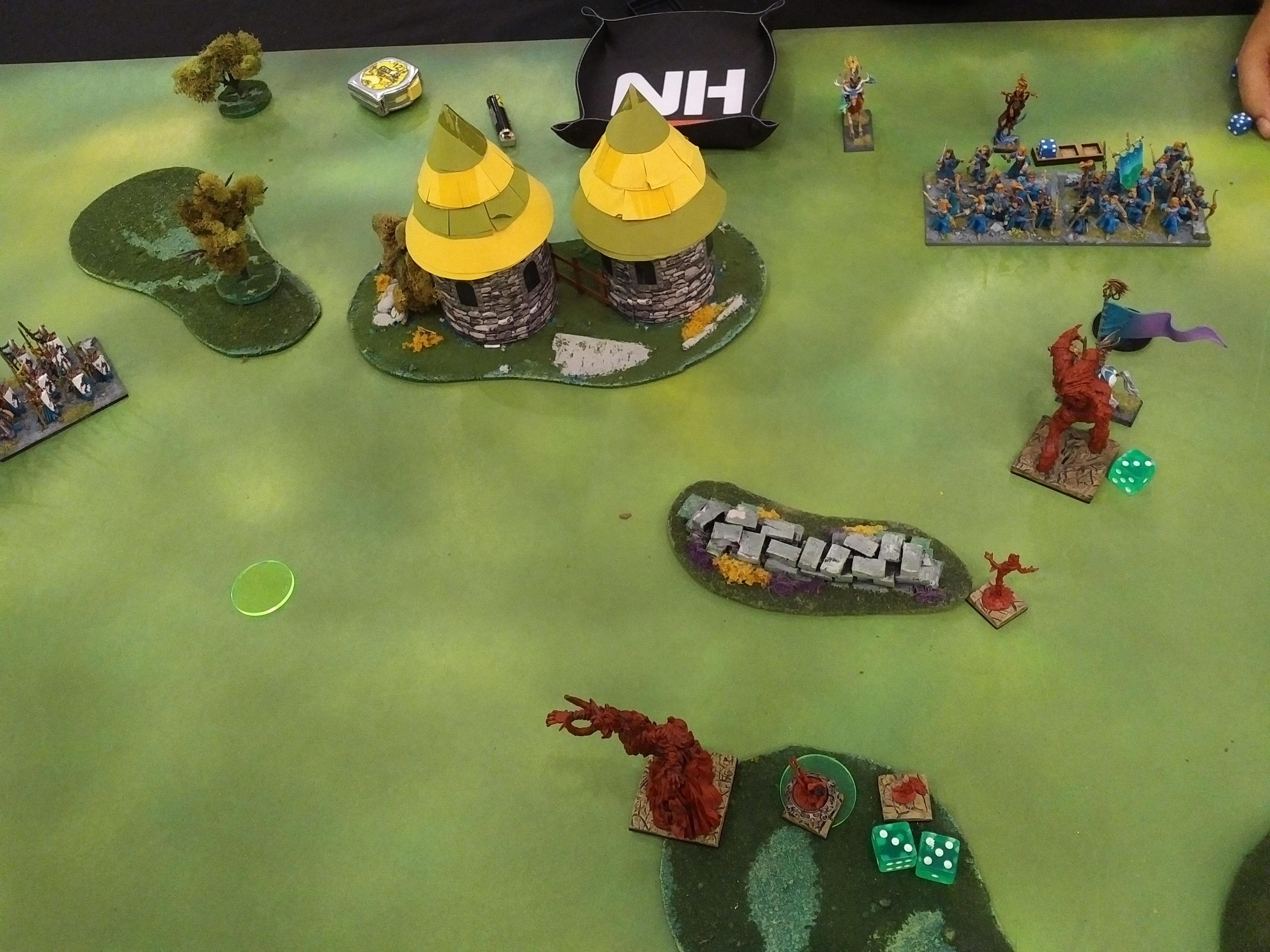 The Elves prepare for the end game. The piercing Archers prepare to take the other secondary and shoot some monsters next turn, while the nimble Archers contest my primary objective and the diadem ASB blocks the CLOFD just outside of 3. Not the Fire Elemtanl-sized hole: the nimble Archers + diadem riddle it with damage and the Circlet of Blood boils them to nothingness. Brutal. 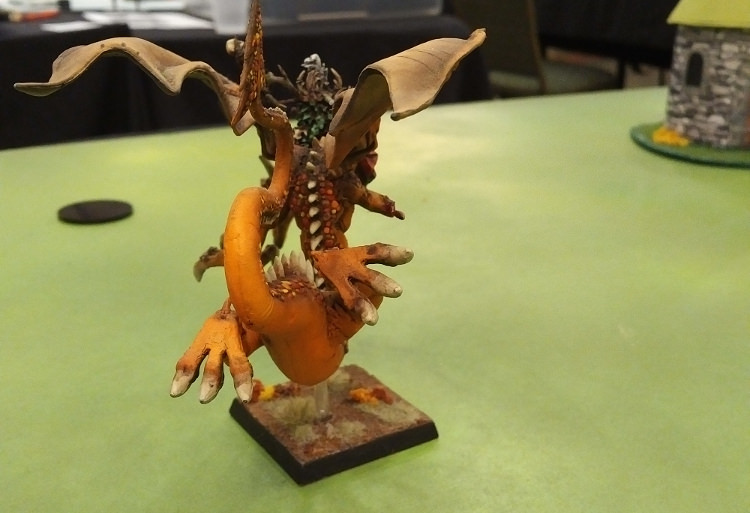 Meanwhile, the mighty Dragon Rider sails off to push the win button 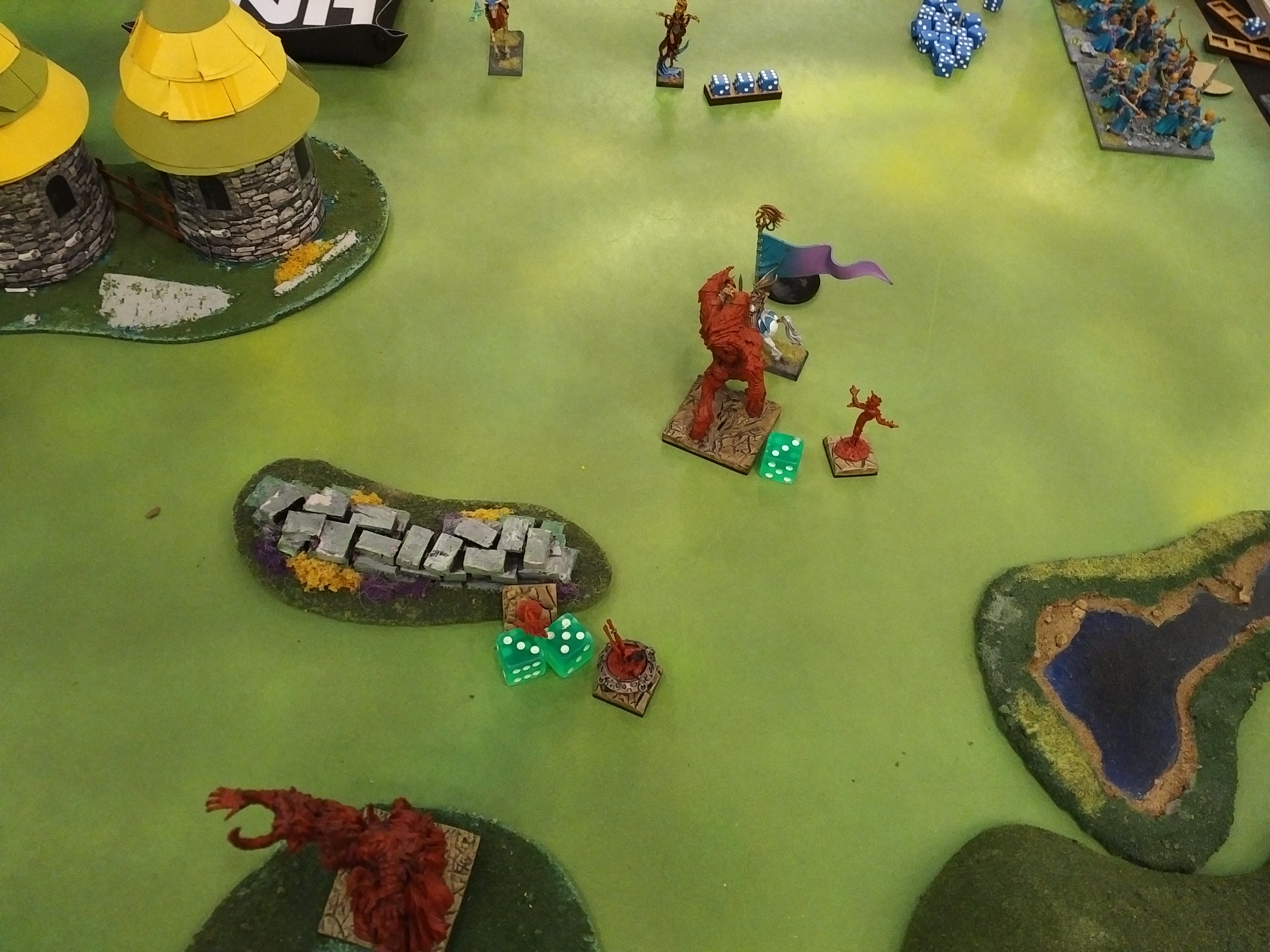 Bloodfire 6. So much thought when into this turn, trying to figure out ways to both kill the nimble Archers and get the CLOFD within 3 of the marker. In the end it just wasnt possible this turn, especially with the incoming piercing Archers, but I could have set Agnes up for a Turn 7 charge into the marker, rather than doing nothing with her. Or at the least used her to heat ray the ASB on pony. Anyway, some fun late game, small scale KOW mind games.

What did happen was the CLOFD and both Mage-Priests roasting the nimble Archers, leaving my primary objective with no one contesting it but also no one within 3 to control. 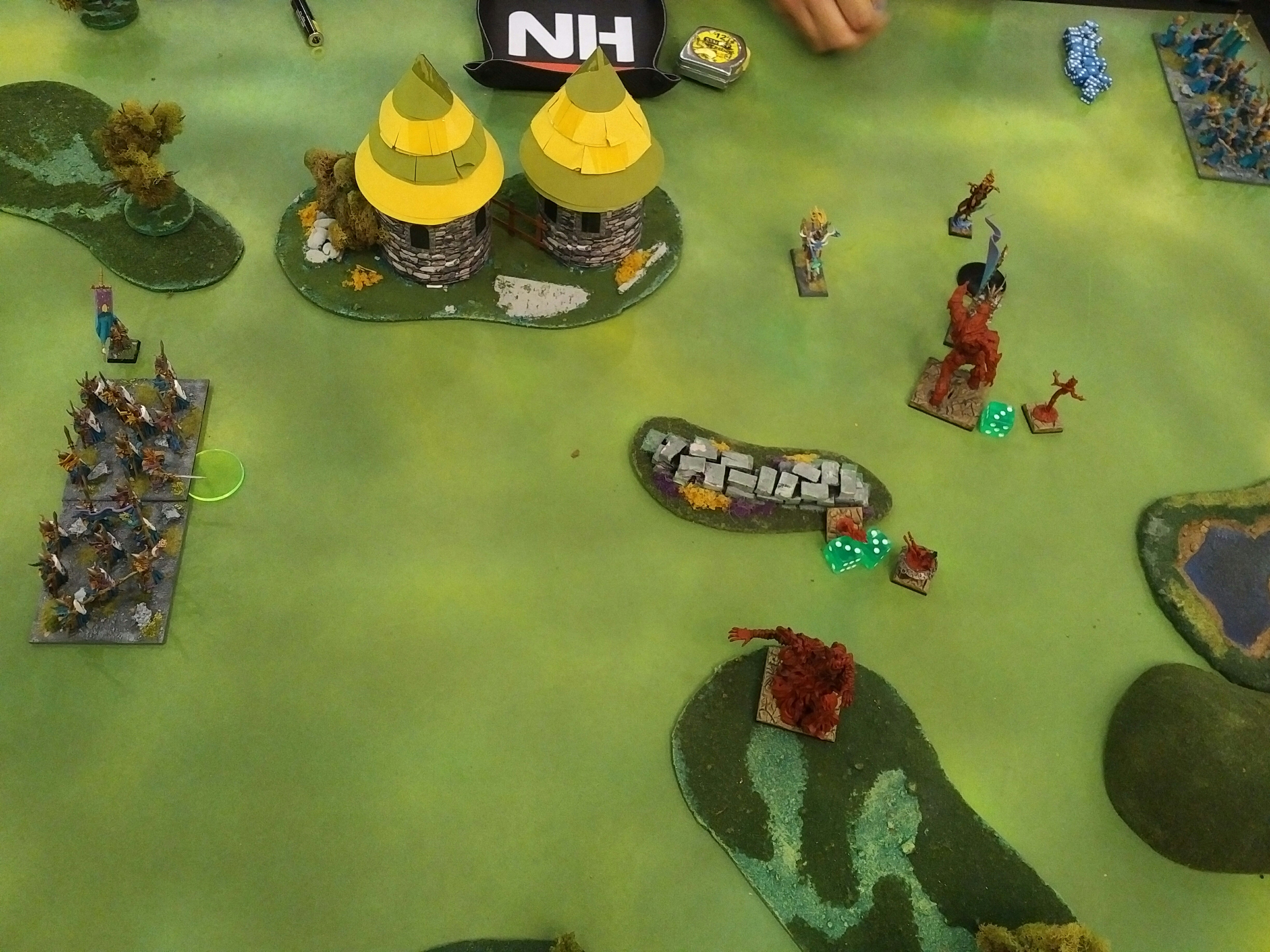 Elves 6 drops one more hammer. The piercing Archers ventilate the CLOFD and then the Mage with Circlet of Blood boils him back to his bloodfire molecules. Annnnd then the war-box ASB shoots the lil martyr Mage-Priest and pops her :O 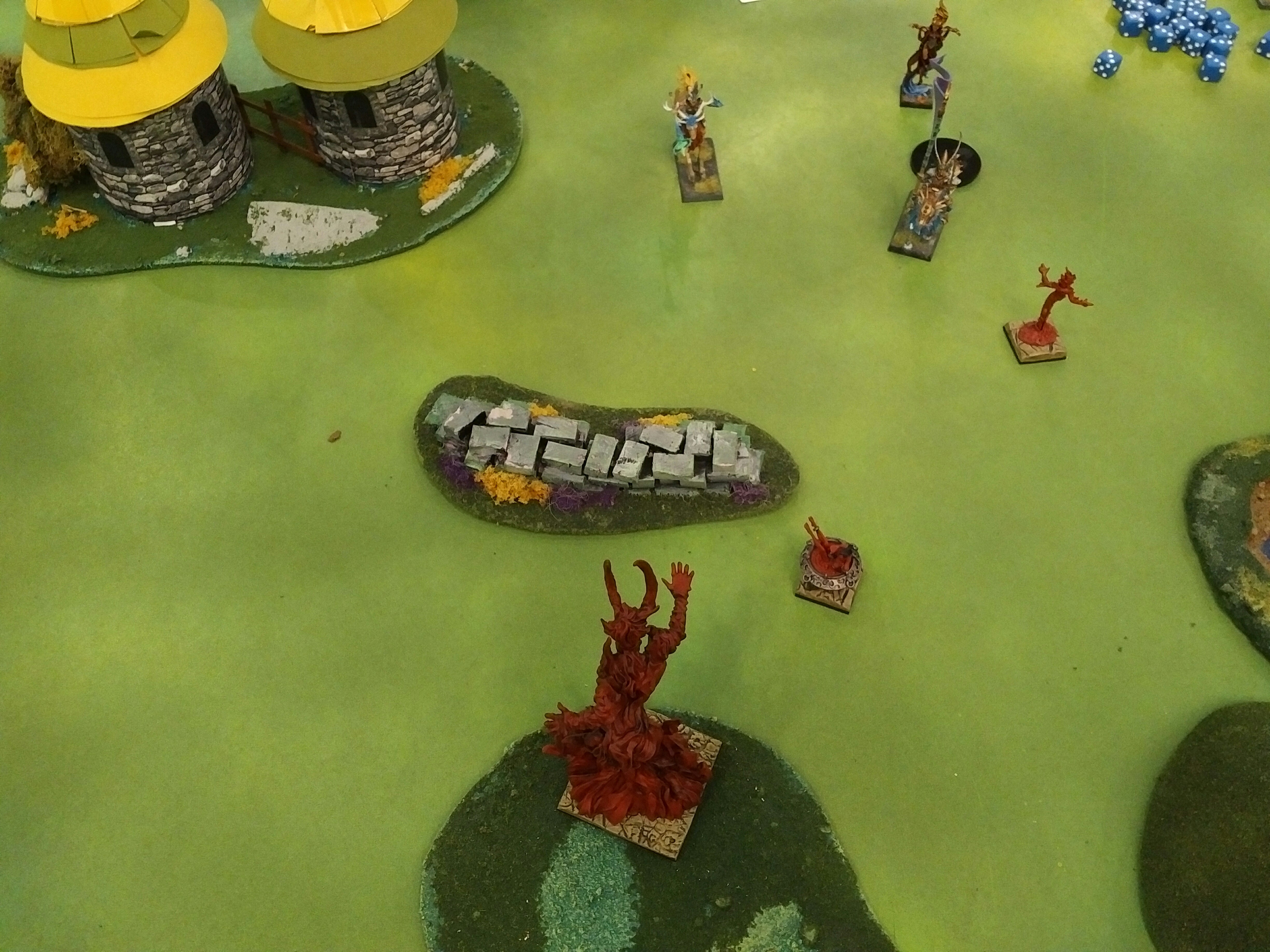 Theres no Turn 7, capping of an entire tournament of six round games for me. Oh, also a …

But a much more fun game than I expected. Allen was engaging to play and I very much enjoyed the late game resource management. Still disappointed I didnt play for the Turn 7 better re: Agnes, who did so very little this game, but it was a moot point ultimately.

With that I ended up going 2 wins, 2 losses, 1 draw, which is pretty typical for me and totally fine. I also walked away with the best painting score this army has gotten, which is probably more to do with the generous rubric used and less the awesome-ness of the painting, but also totally acceptable!

Also happy to announce that Bloodfire will be traveling to the Crossroads GT in September. I had thought about swapping them out for my Ratkin, but Im so tuned into this army it feels dumb to switch horses mid-apocalypse, especially as Crossroads is a team tournament where I (Capt. Salvage) can influence matchups and give the army the leg up it needs, especially when it comes to scenarios. Therell probably be a practice match between now and then, apart from some rat experiments I ran last weekend which went pretty pear-shaped O_O