Bright and early day two, Im up against Steve, another player Ive played near for years but never actually faced (also Tims team mate). An added bonus is that Steve is a very chill, very patient dude. On my part, I was very, very tired from staying up way too late playing Rising Sun and chatting the night before. As one does at tournaments.

Pretty standard Dwarf fare, nothing too crazy, with pairs of important stuff where able. Fun Fact: There were 5 Dwarf armies at this GT, more than any other faction! Madness

Fourth round was Push, and with 1 token each it was blessedly simple. Dwarfs won initiative and get the push going. 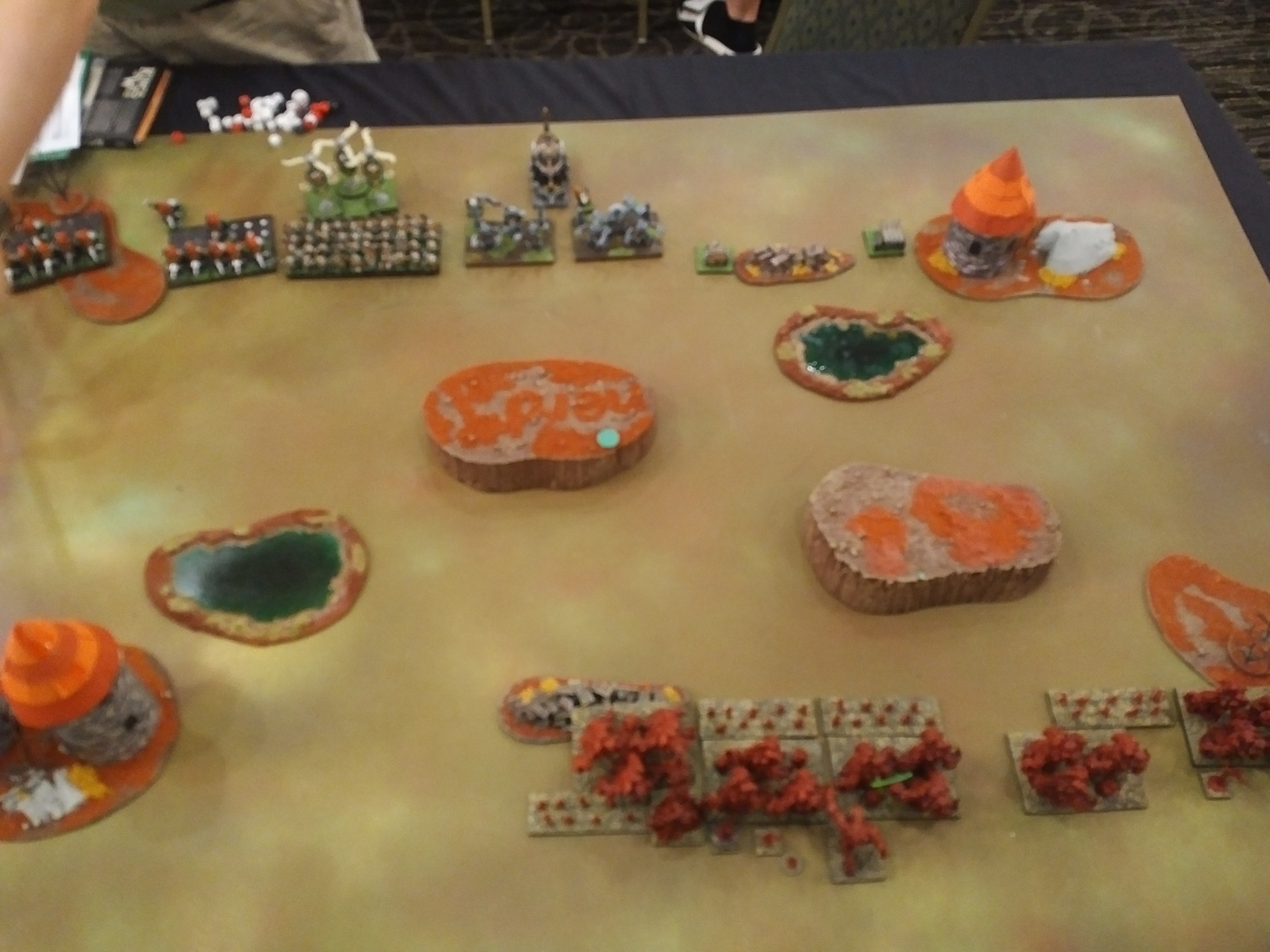 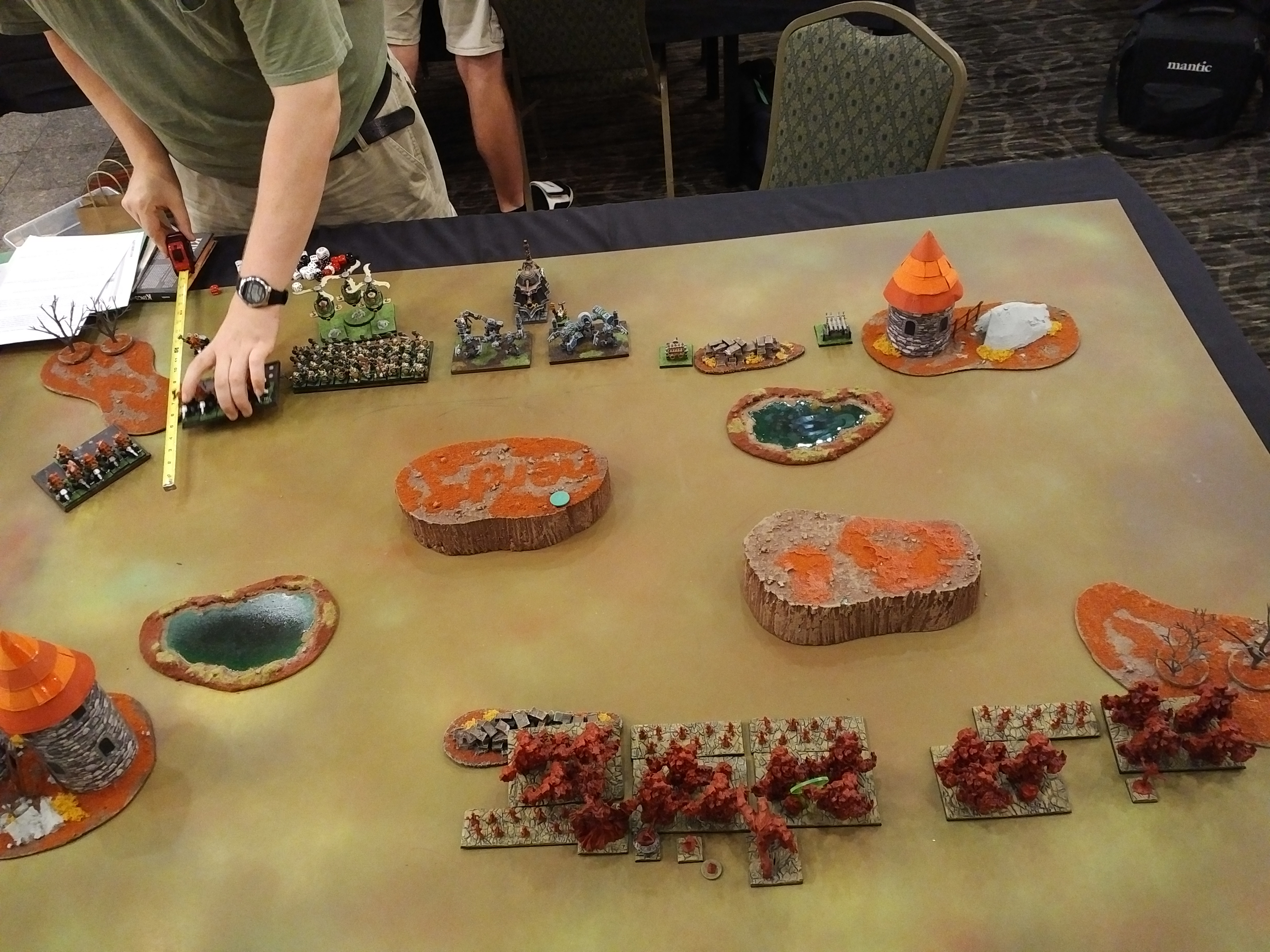 Dwarfs in the midst of rolling out. Getting that speedy flank a-flanking first thing. Pretty sure his push token is in the Ironclad horde at the moment. 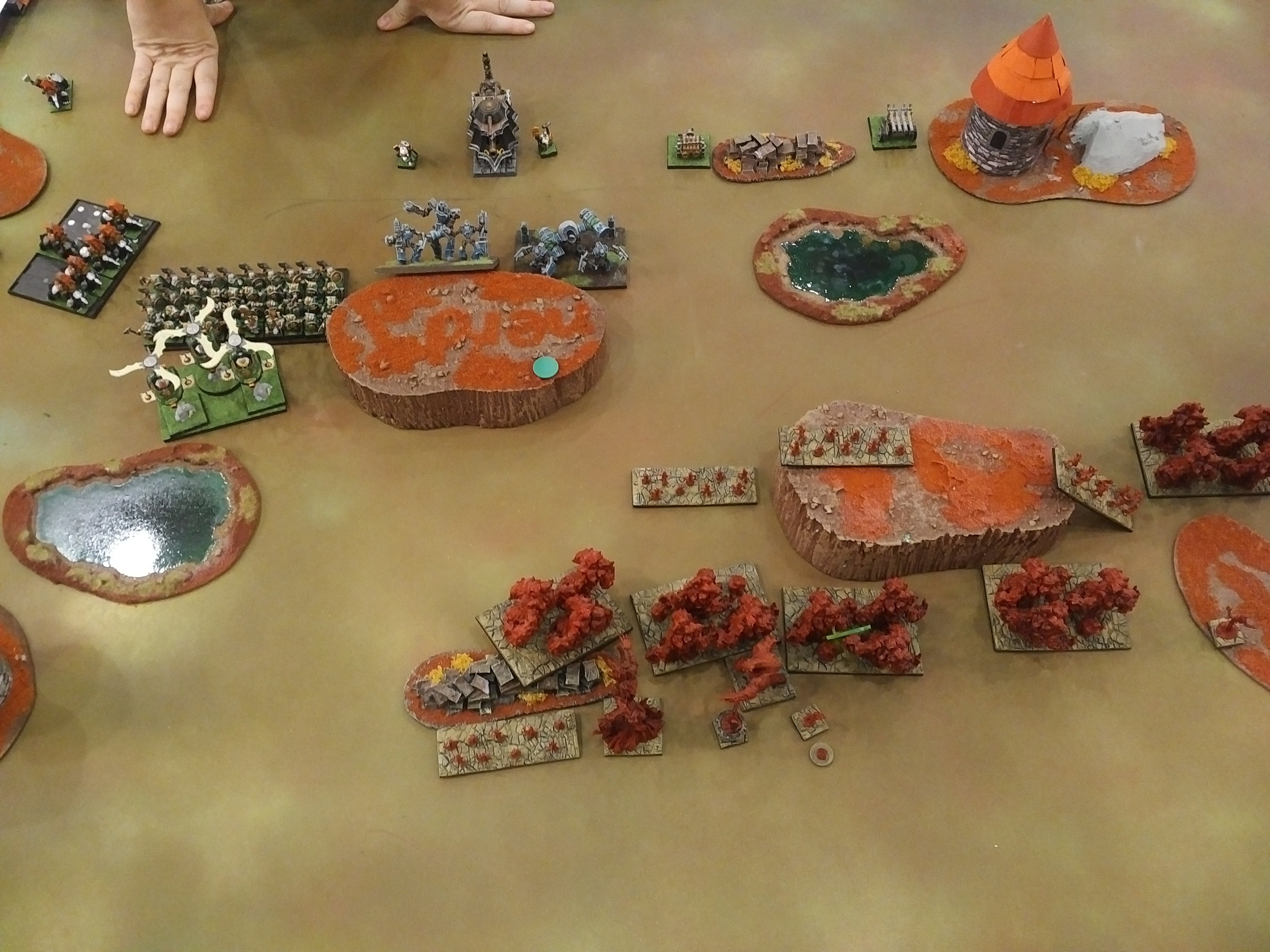 Bloodfire saunters forward in response, getting that battleline wheel a-wheeling. Push token is on the central Fire horde. 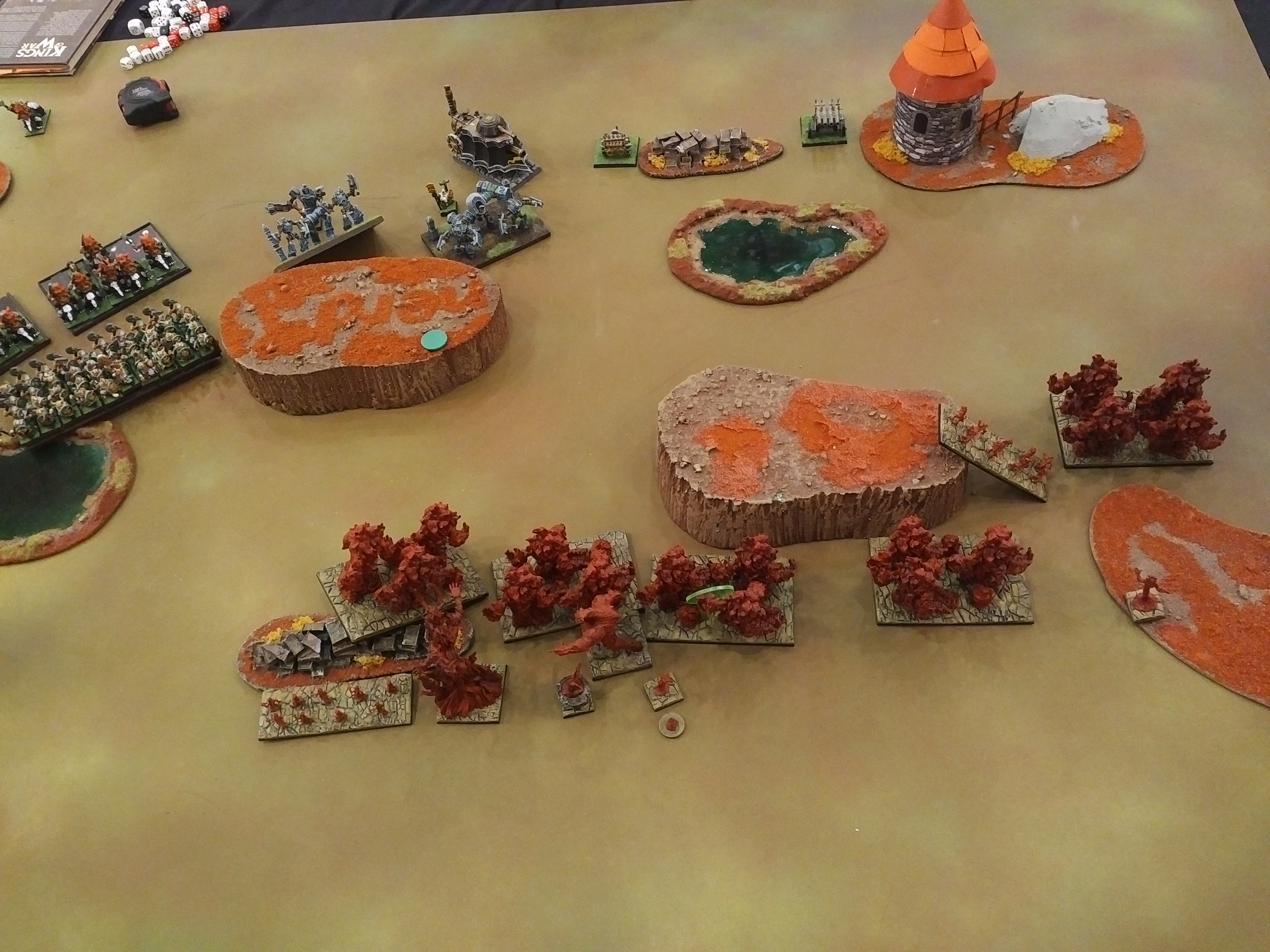 Dwarfs continue encircling the elemental force – Elohi are to the left of that pond, facing inwards. Organ Guns and possible the Behemoth splatter two units of Ember Sprites. Rest In Pepperonis, little dudes. 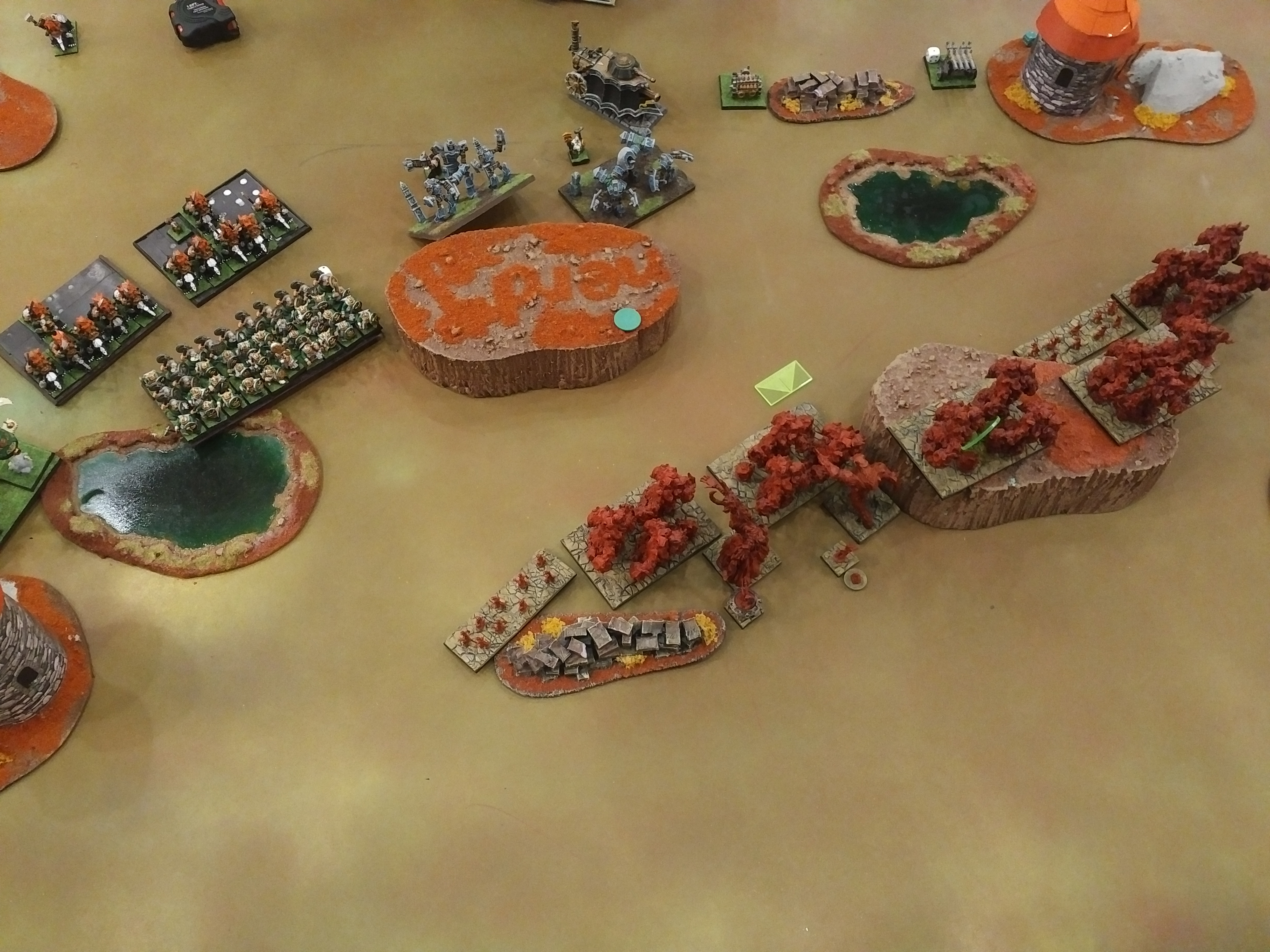 The Bloodfire battleline continues canting around. The Diadem horde on the far right and maybe the Sprites near them land some wounds on the rightmost Organ Gun. The tension is mounting! 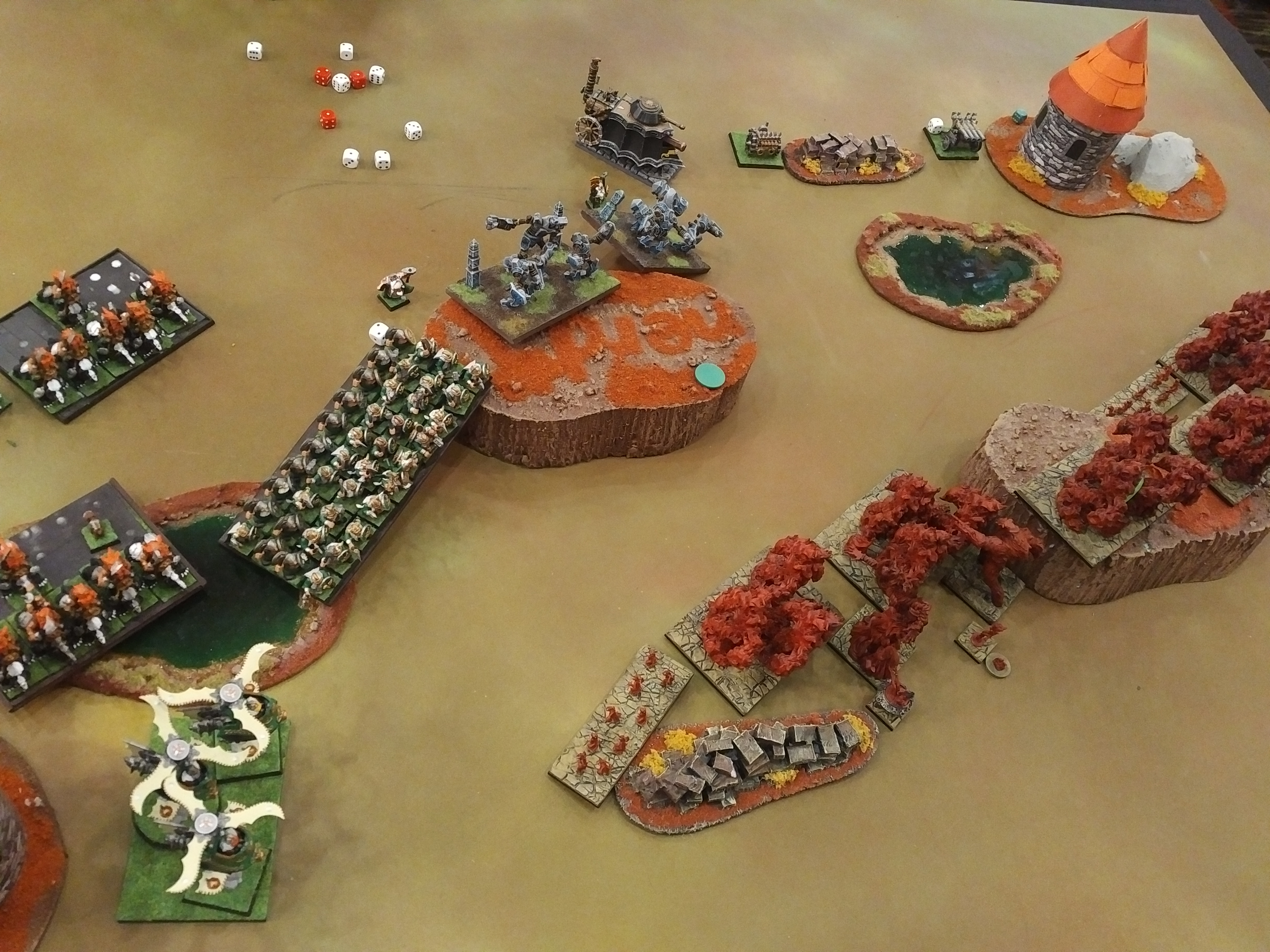 The Dwarfs refuse to engage! Organ Guns patter into the Diadem horde and the nearby Sprites, but only cause chip damage. 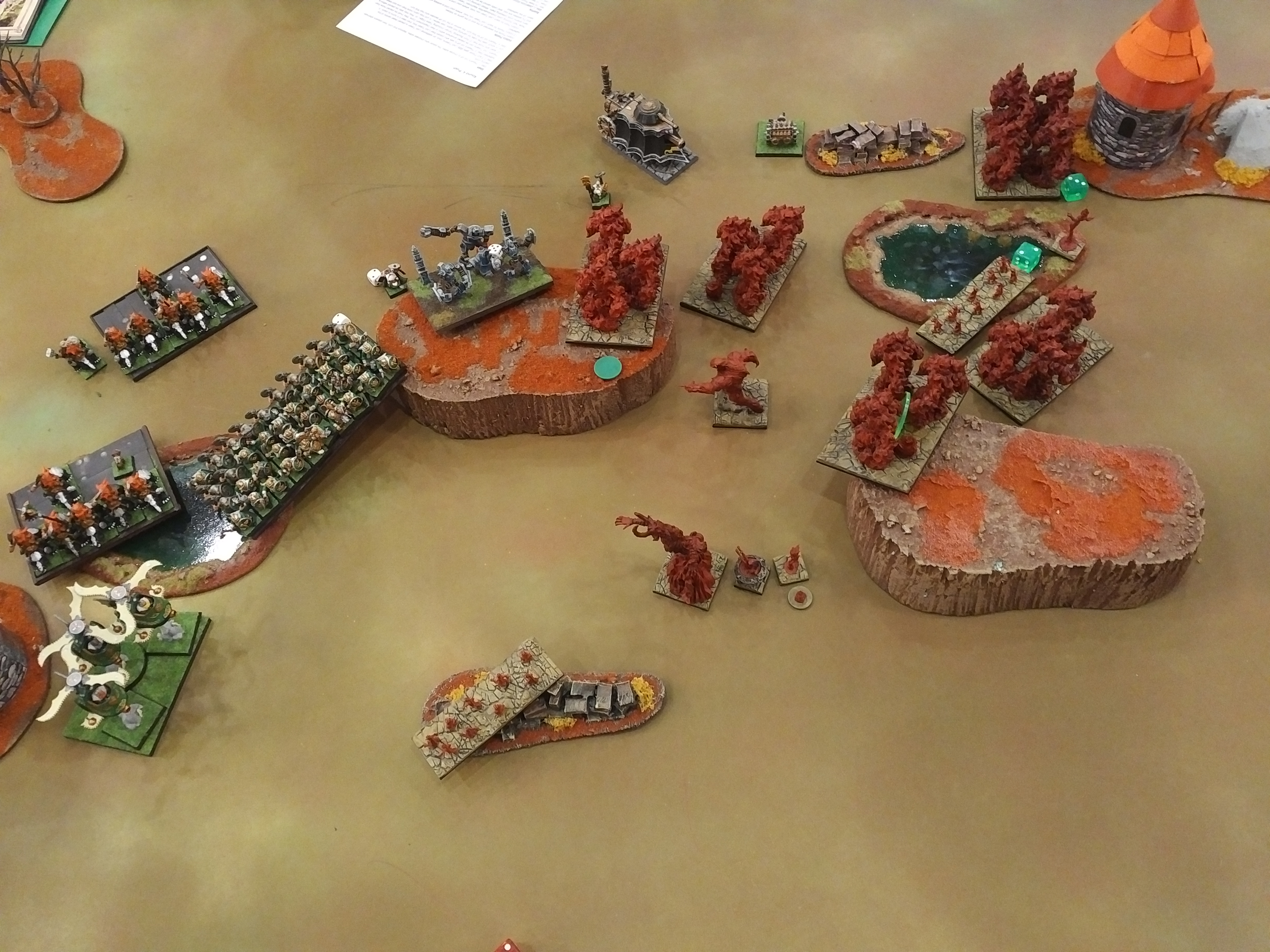 Turn 3 and Bloodfire has potentially disastrous charges it can declare? Here we go! Two Fire Elemental hordes slam into the right Earth Elemental horde, reducing them to slag with the help of at least one bane chant. Meanwhile, the Diadem horde on the right charges and obliterates an Organ Gun, preparing to ride the obstacle into the next one. Sprite fire and hopefully the Clan Lord chips at the Ironclad horde, while Agnes heat rays the surviving Earth Elementals. 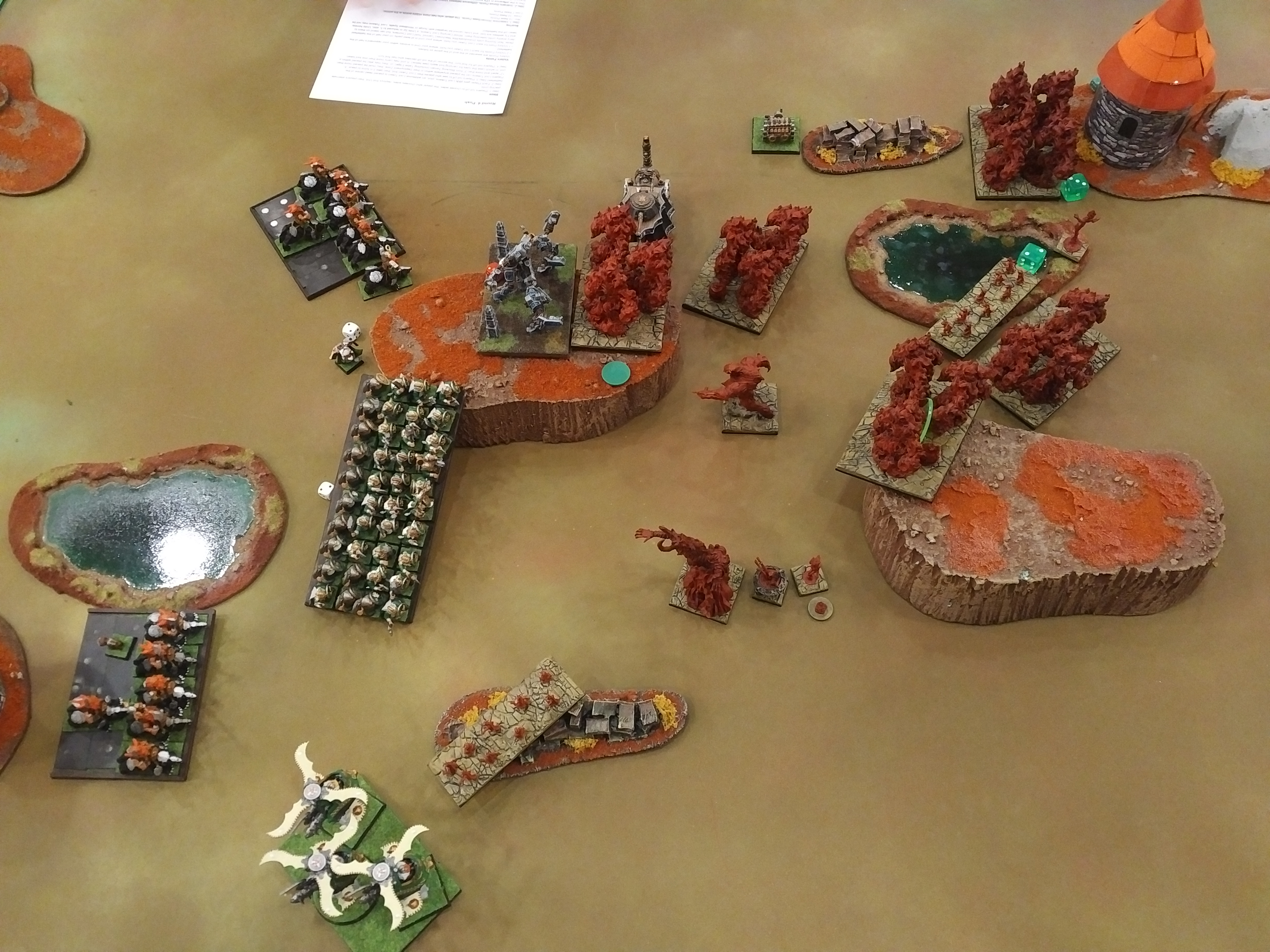 Dwarf 4 and apart from giving a Fire horde a really bad time, the stunties for the most part continue to hold off. Elohi fly deeper into the Bloodfire DZ, with Brocks preparing to invade either side of the board as needed. Worth noting that the Brock Riders on the Bloodfire side of the table are carrying the push token at this point (and are the pathfinder Brocks). 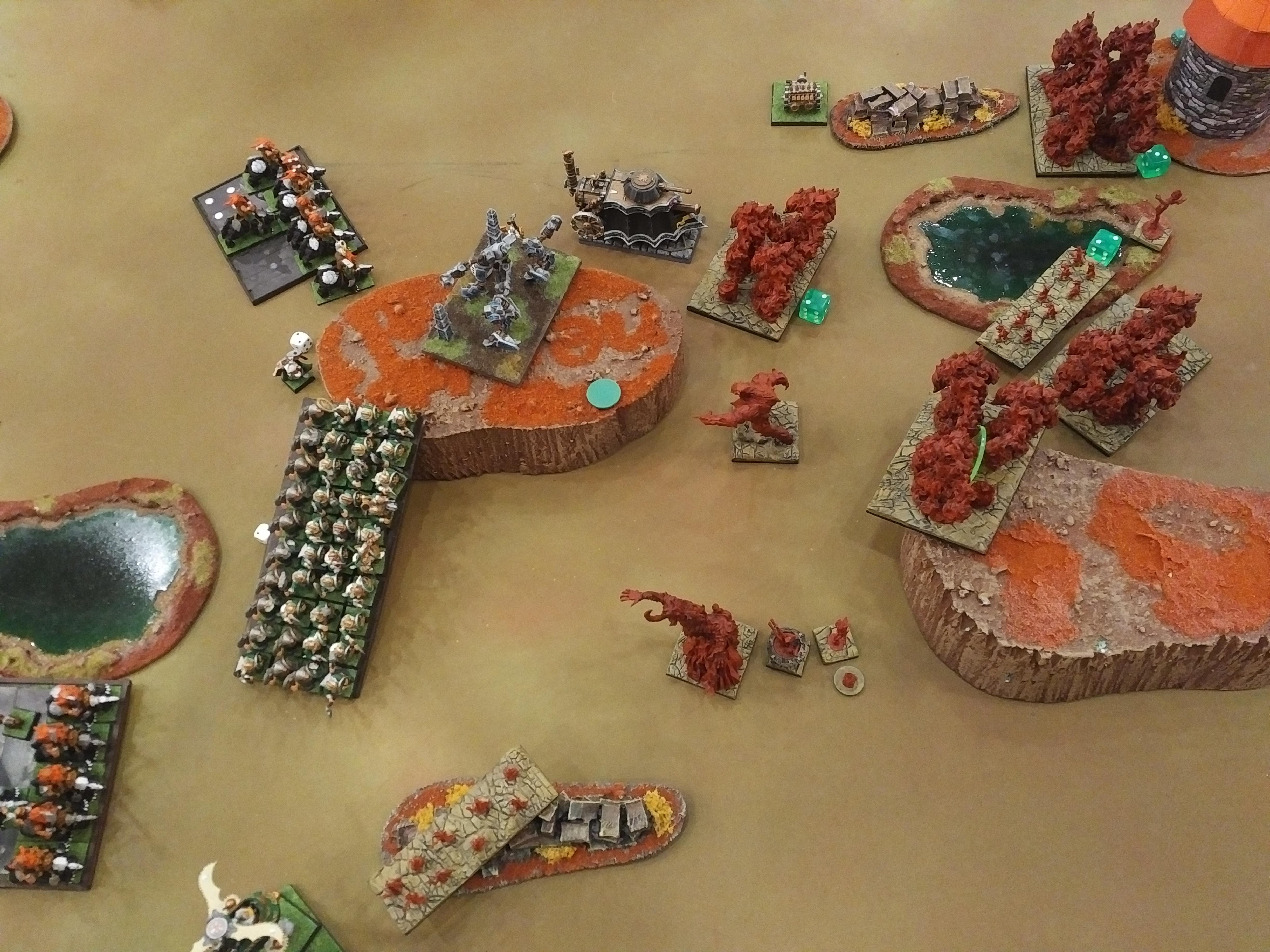 Yep, those Fire Elementals get dead. Their buddies nearby take some damage from the Organ Gun before it gets creamed next turn. 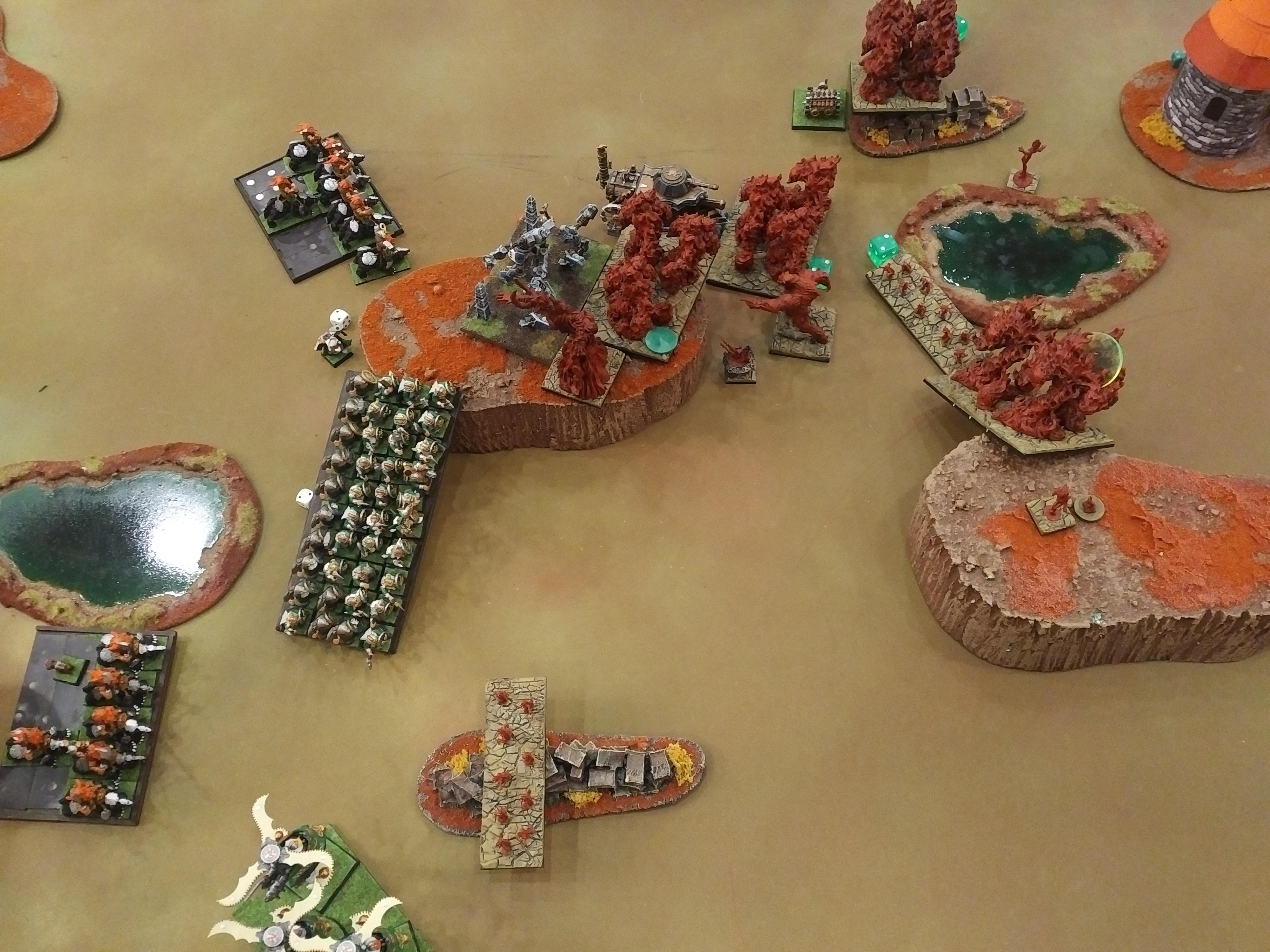 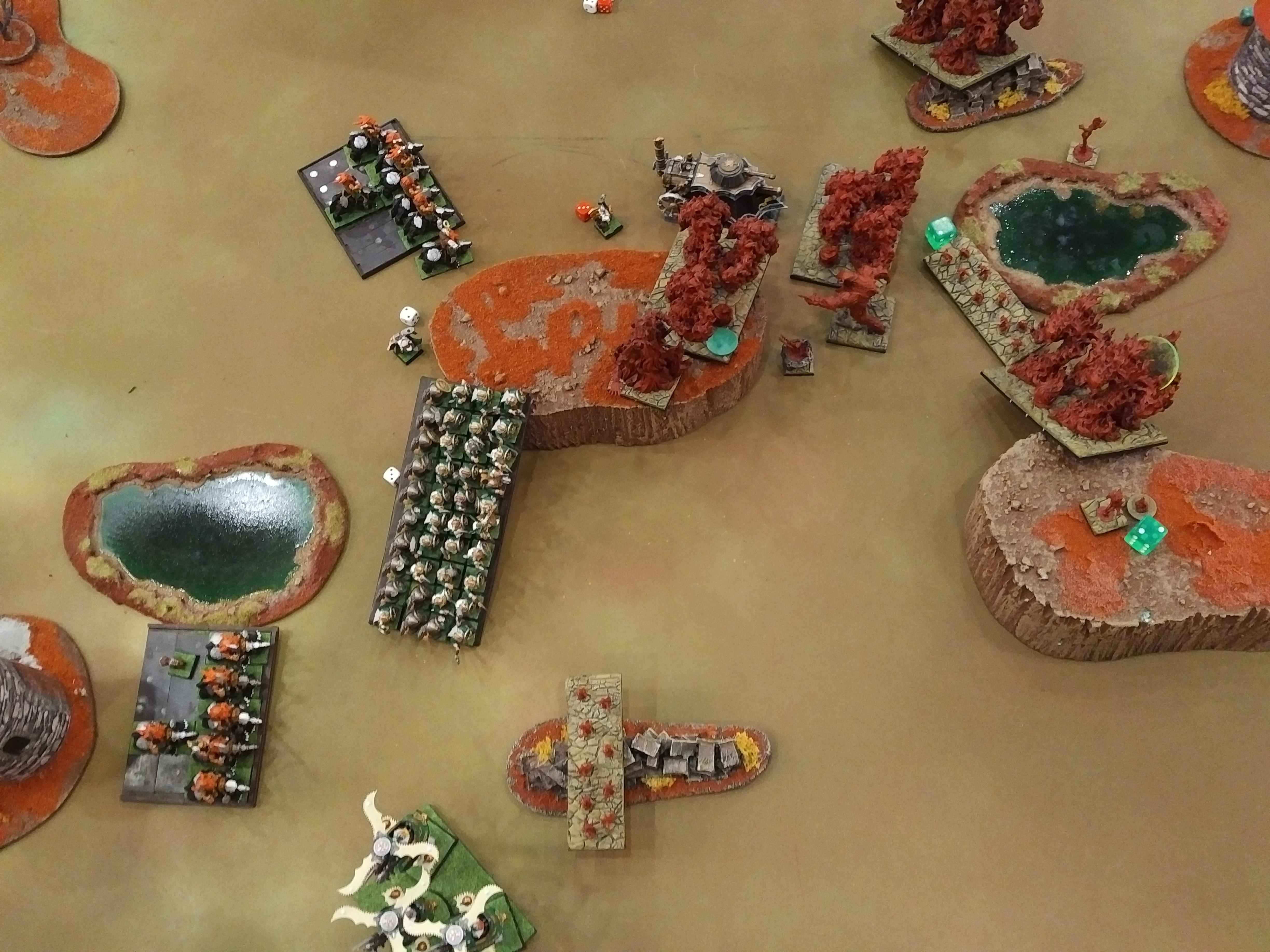 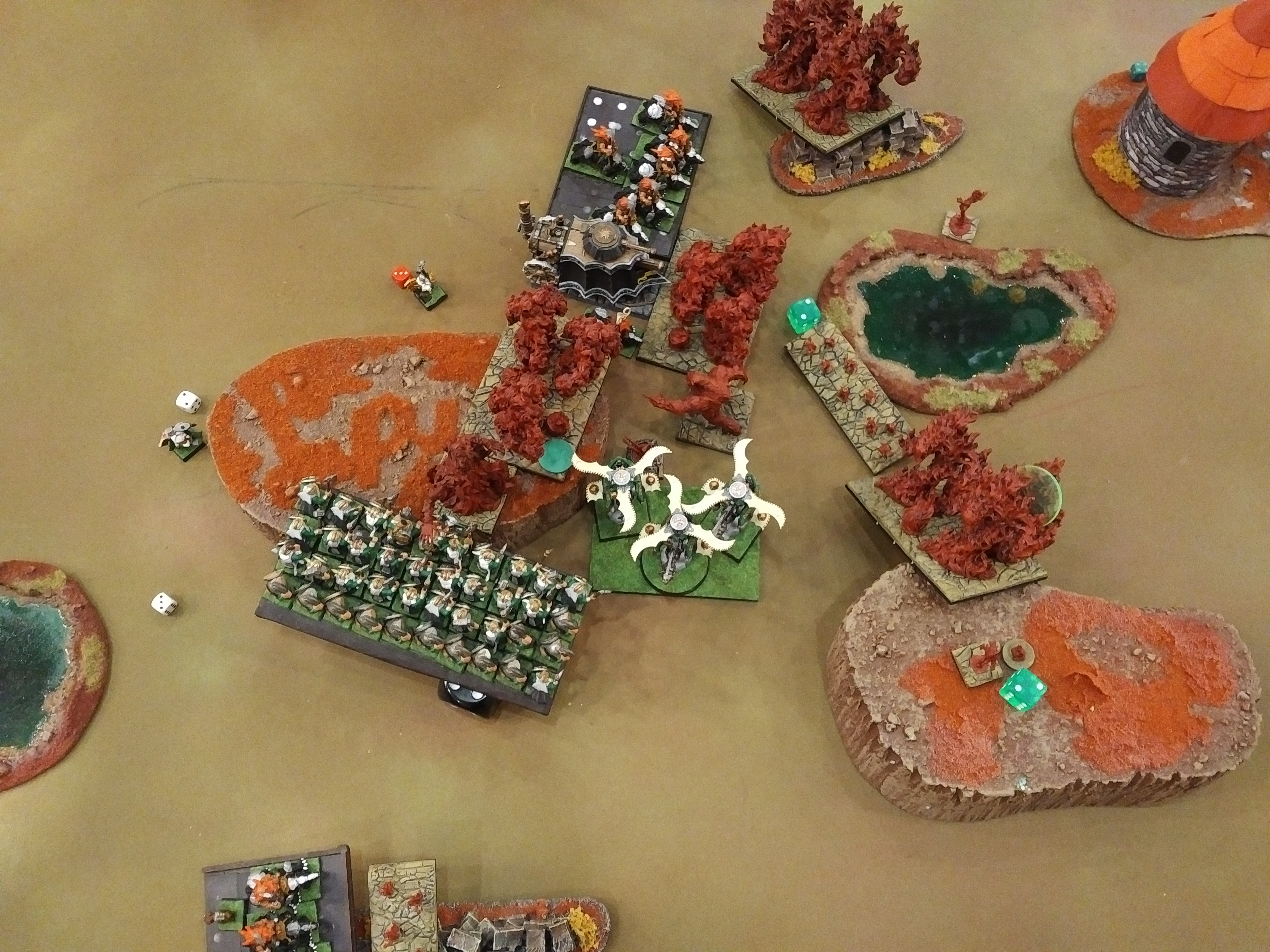 The Dwarfs bring the pain Turn 5. Ironclad tackle Agnes in the front, Behemoth + Brock Riders + Berserker Lord hit the Behemoths Fire horde, and the Elohi sweep into the Herald, with an easy overrun into the CLOFDs flank. Im kicking myself at this point, I always seem to have a game where I setup such a stupid individual overrun. Brocks to the south also nom up some Sprites. 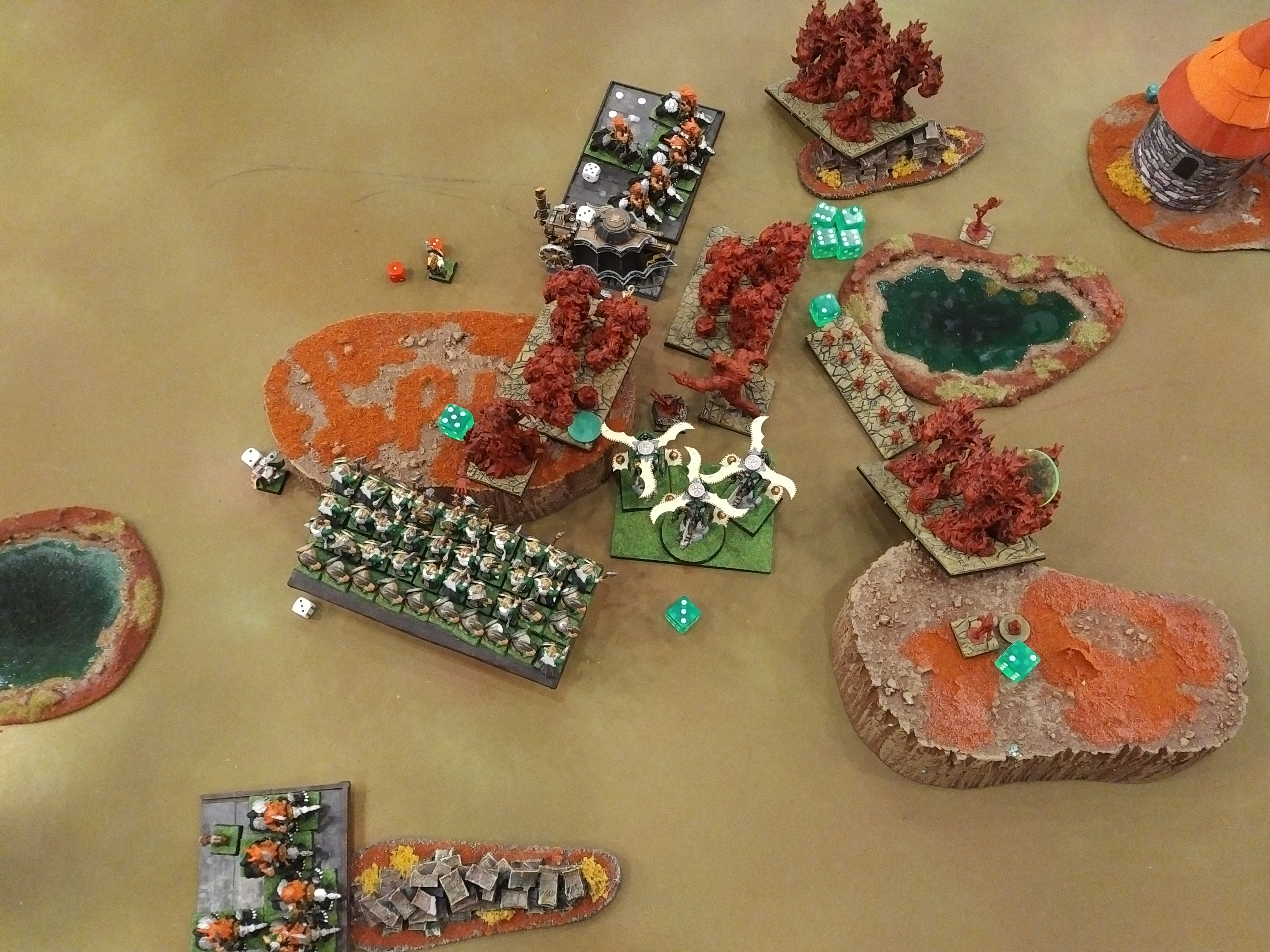 Better to be lucky than good XD The mega charge against the Fire horde rolls snake eyes, leaving them at 22 damage! And the Elohi painfully fluff their hits against the Herald, dealing just 3 damage for no result. Agnes takes a pretty hearty 5 damage but seriously, Steves dice just saved my butt. 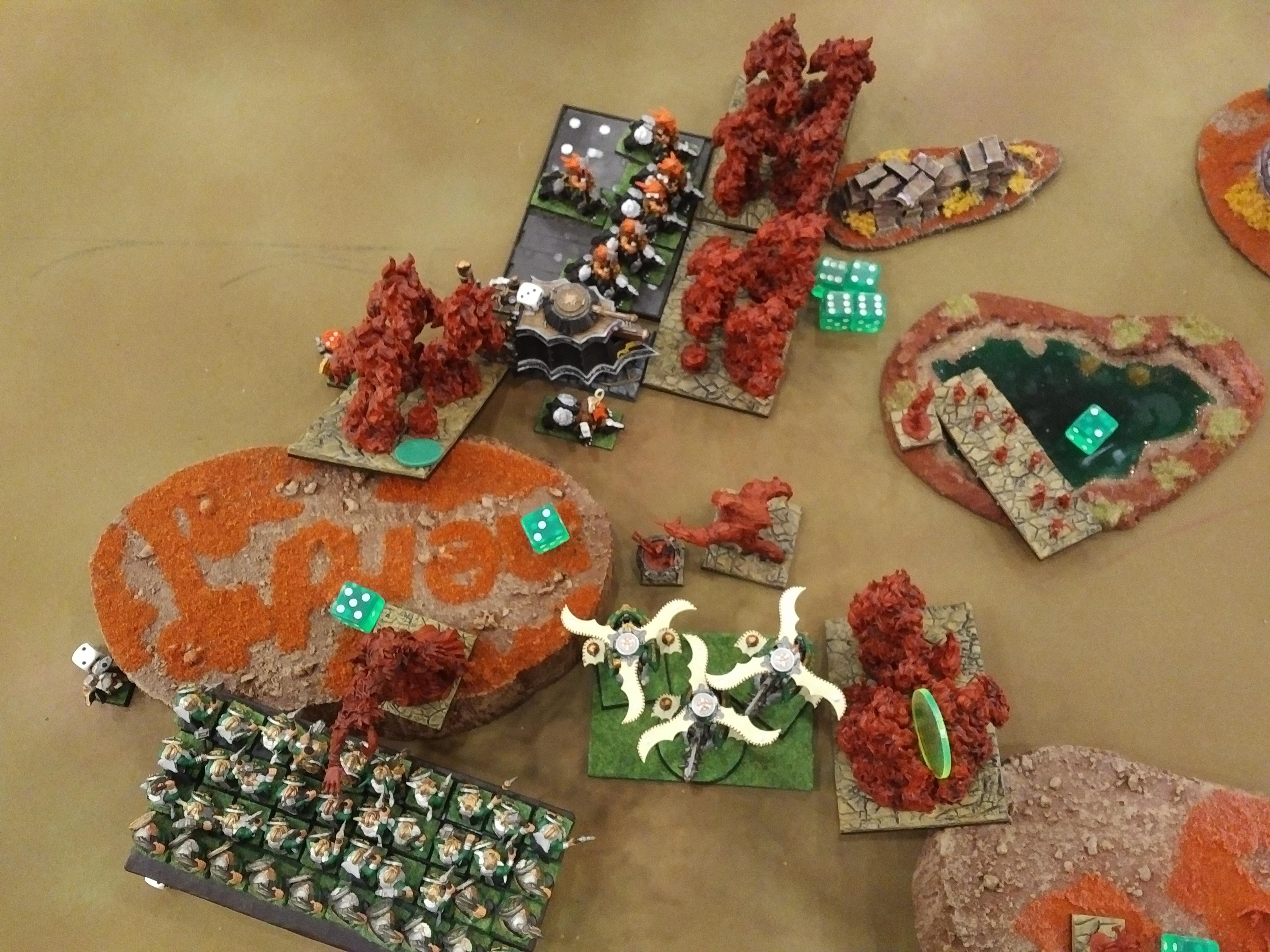 Time to capitalize on the Dwarfs misfortune. The mangled Fire horde and the Diadem horde (hindered) slam into the Brocks, the Fire horde who had grabbed the central push token when they killed the Earth Elementals heads into the Stone Priest, Agnes grumpily counter-charges the Ironclad and the original push token Fire horde flanks the Elohi. The CLOFD doesnt move (…) and preposterously neither does the Herald (SALVAGE, WHY???) 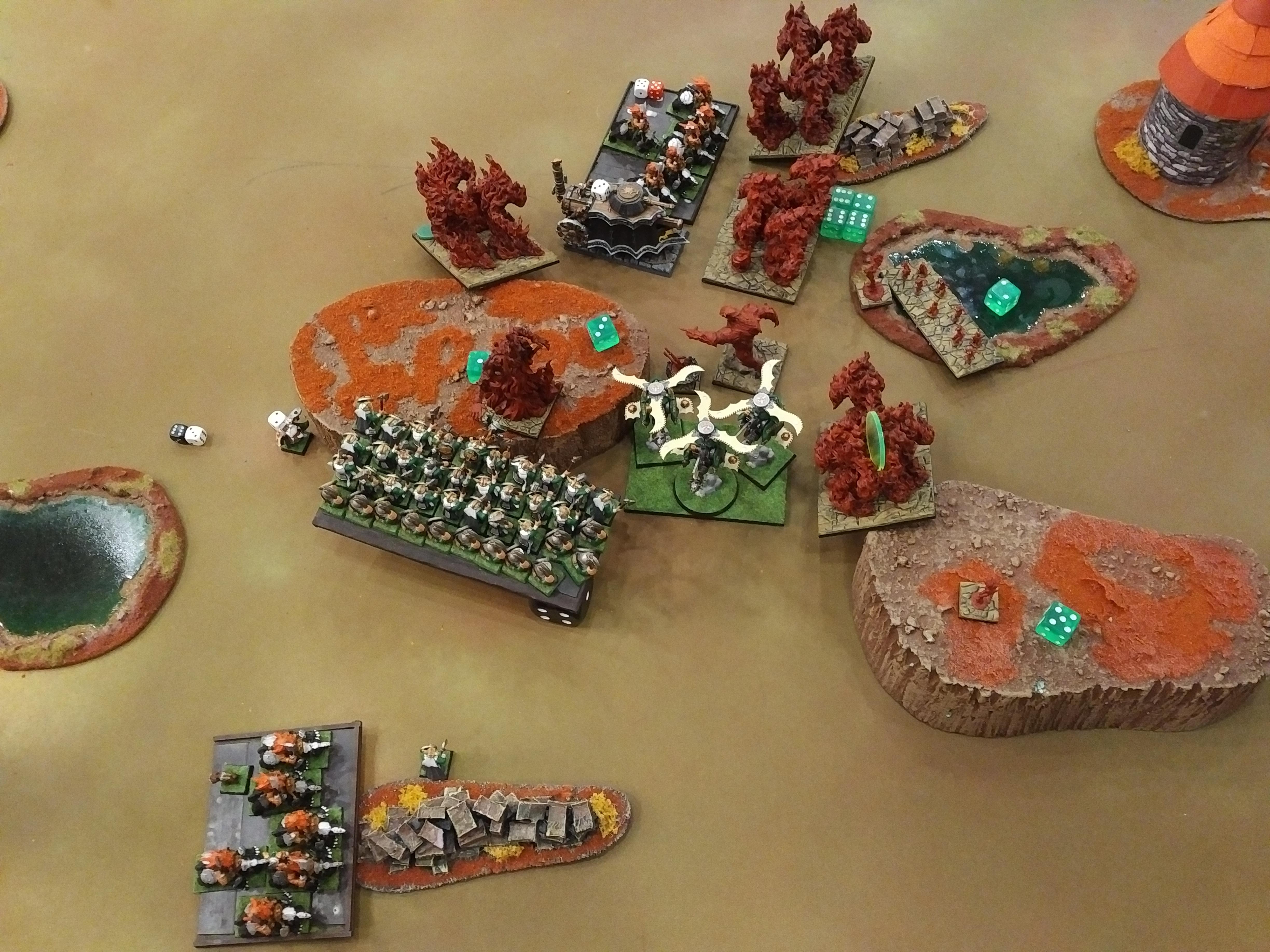 The CLOFD + inspiring Mage-Priest incinerate the Berserker Lord whilst the martyr Mage-Priest heals Agnes down to 1 damage (snacking on her healing brew in the process). And then combat goes less awesome than anticipated. The Brock Riders take 10 damage, but thats a far cry from their bravery, and the 9 damage on the Elohi is not as catastrophic as expected. Im left feeling like I really messed that one up? Or maybe just overinflated what my Fire Elementals could do

(Math Time: 36 CS2 (1/2 of that hindered) into the Brocks = 12.5 wounds, for a 9.5 rout and no chance of a waver. 36 CS2 into the Elohi = 12 wounds, for a rerolled 5 with no chance of a waver. The Brocks were always going to be a grind, especially with the hindrance, but the Elohi wasnt as foolish as I thought at the time. And there also wasnt a lot of options, apart from shooting them with the CLOFD and then surging the Fire horde in, which would have left the Berserker Lord free to rampage. Obviously moving the Herald and rotating the CLOFD where possible was a thing that should have happened.) 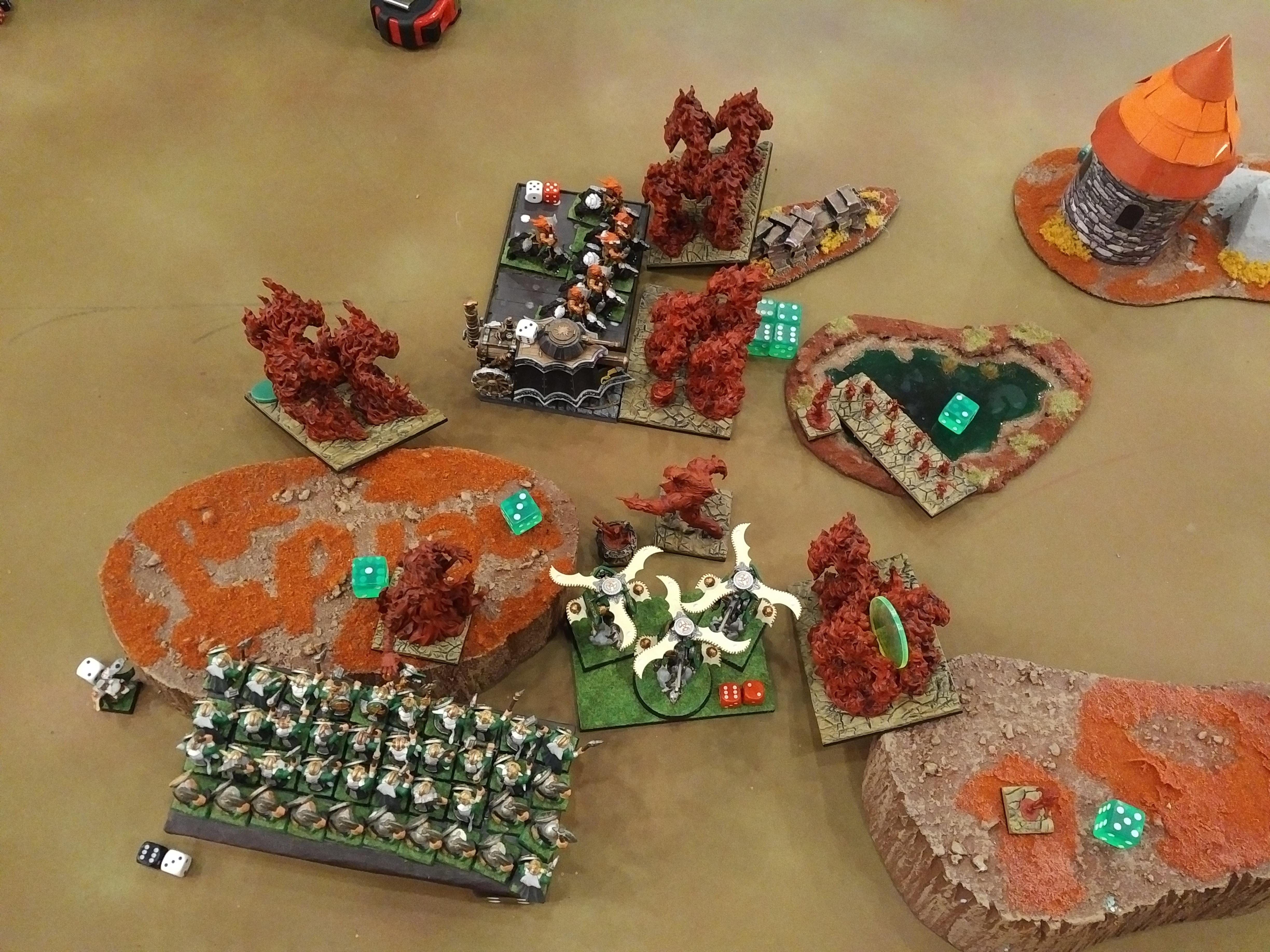 Dwarf 6 and we rinse and repeat. Brock + Behemoth back into the severely damaged Fire horde, Elohi back into the Herald (@_@), Ironclad back into Agnes. 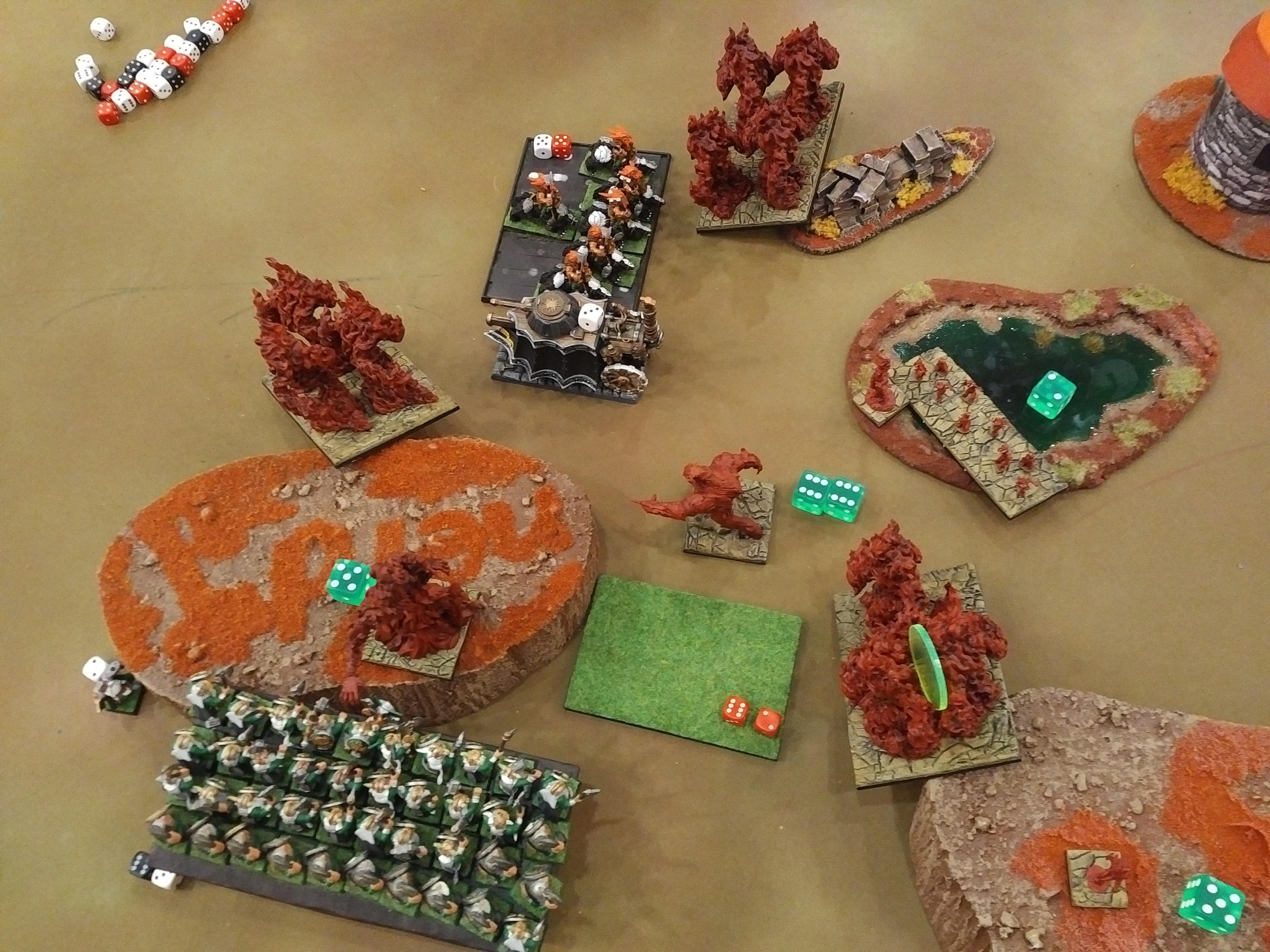 The B+B Fire horde erupts into warm goo, the Herald bites it, allowing the Elohi to flank the CLOFD for significant damage (12) but a failed rout (!), and Agnes goes back up to 5 damage. Inevitable but still ouchful turn. 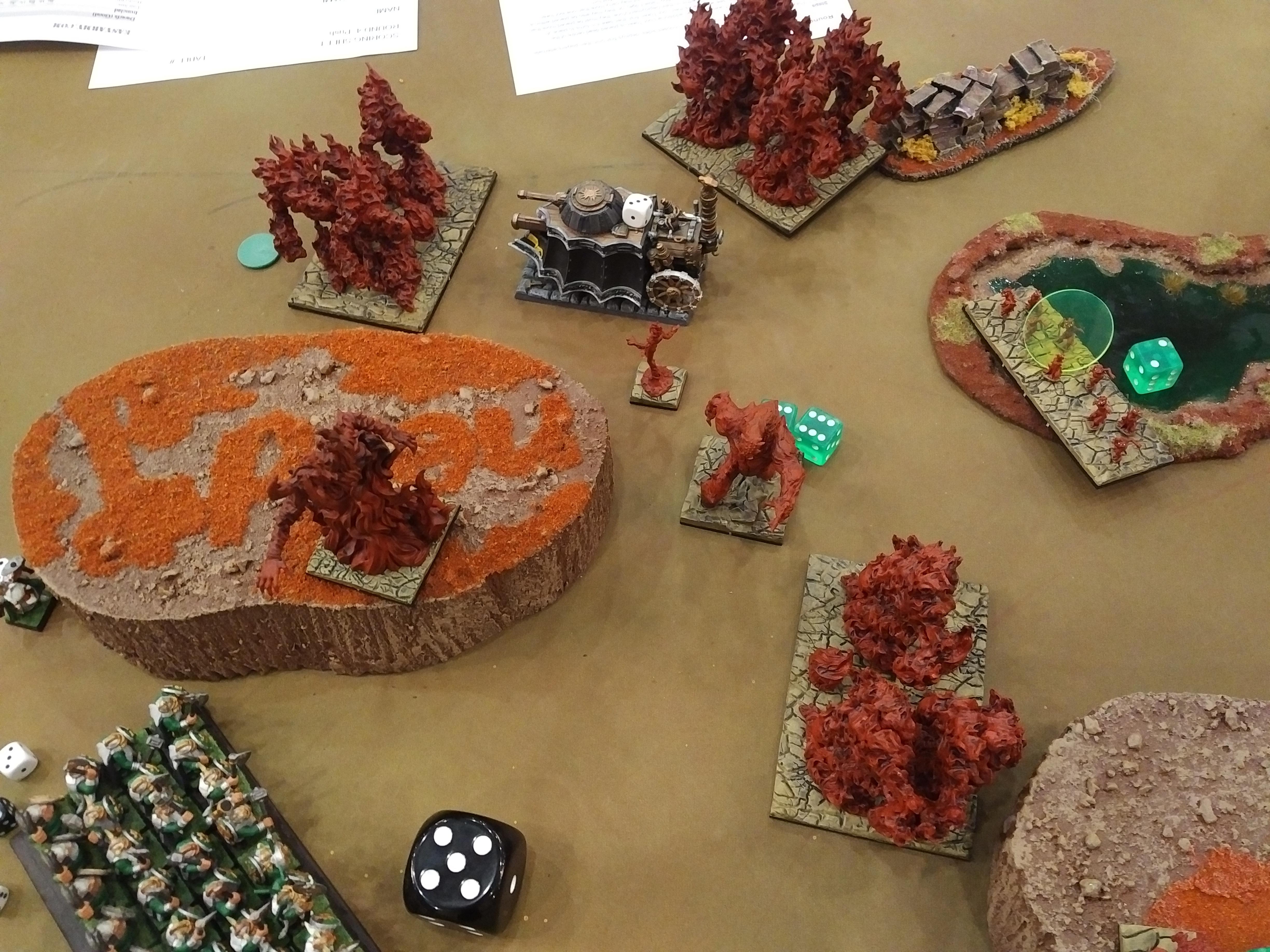 Bloodfire 6 and potentially the end game. The surviving Sprites are tossed a token and then the big boys and girls go to work. Agnes, her damage removed, bats around some more Ironclad (I really dont think they broke). The northern Brocks are removed by the (still hindered!) Diadem horde, while a push token Fire horde punches a meager 3 damage into the Behemoth. And the Elohi are ended, thanks to Fire flank and CLOFD front.

With no Turn 7, this one somehow came down to a …

Up Next: FILTHY. ELVES.