Last game of day one is against Tim, a dude Ive seen at tournaments for approaching a decade but somehow never played. At long last, its wrasslin time!

I just realized how short on inspiring this list is

Id say its probably worth swapping a conclave or two for a Magus with inspiring talisman, but ranged support is conceivably a thing.

Third round was Dominate, one of my favorite scenarios since it ensures a grind and benefits brick armies, like Bloodfire here. And sorta Varangur too. Bloodfire won initiative and got the party started. 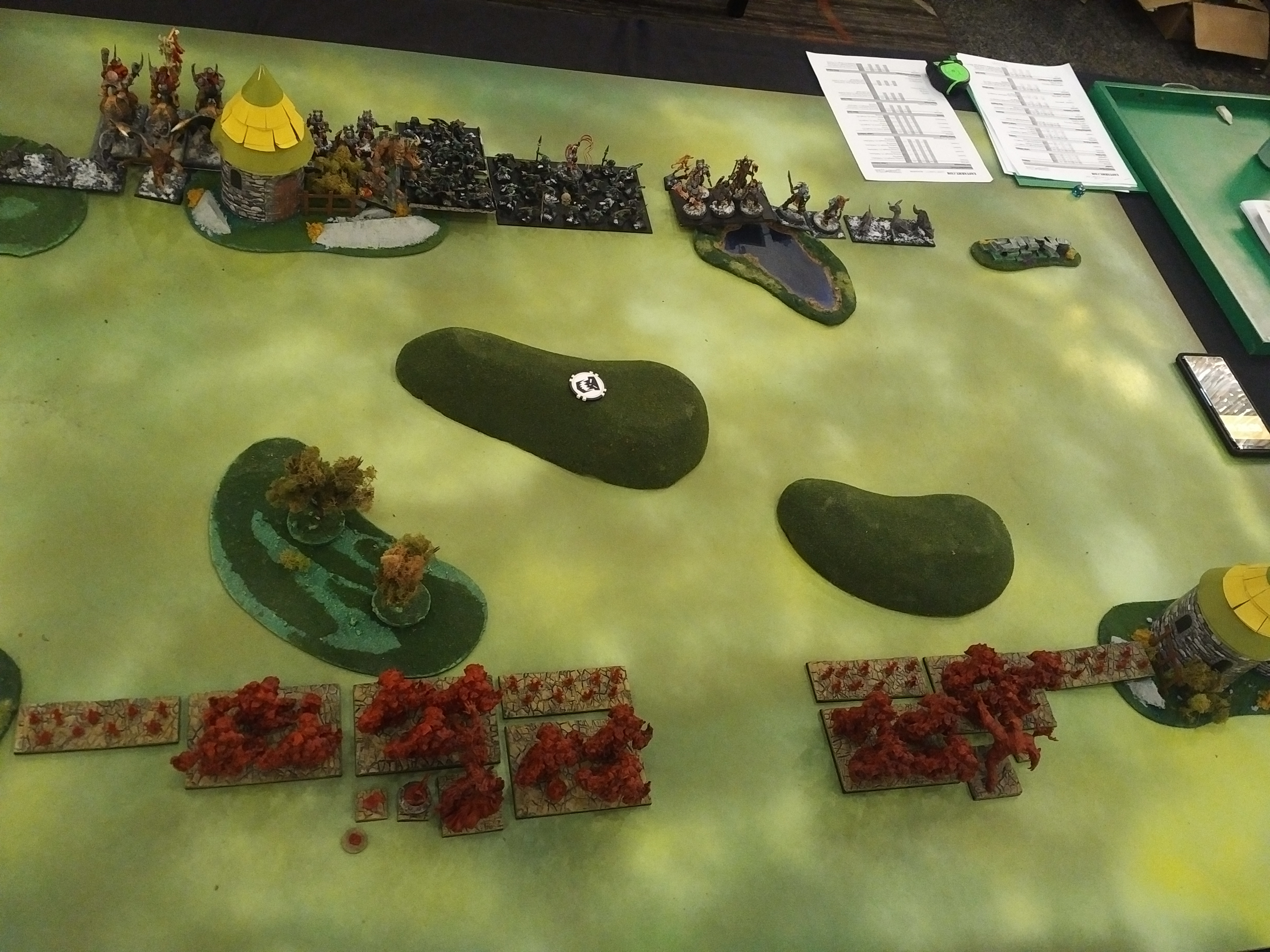 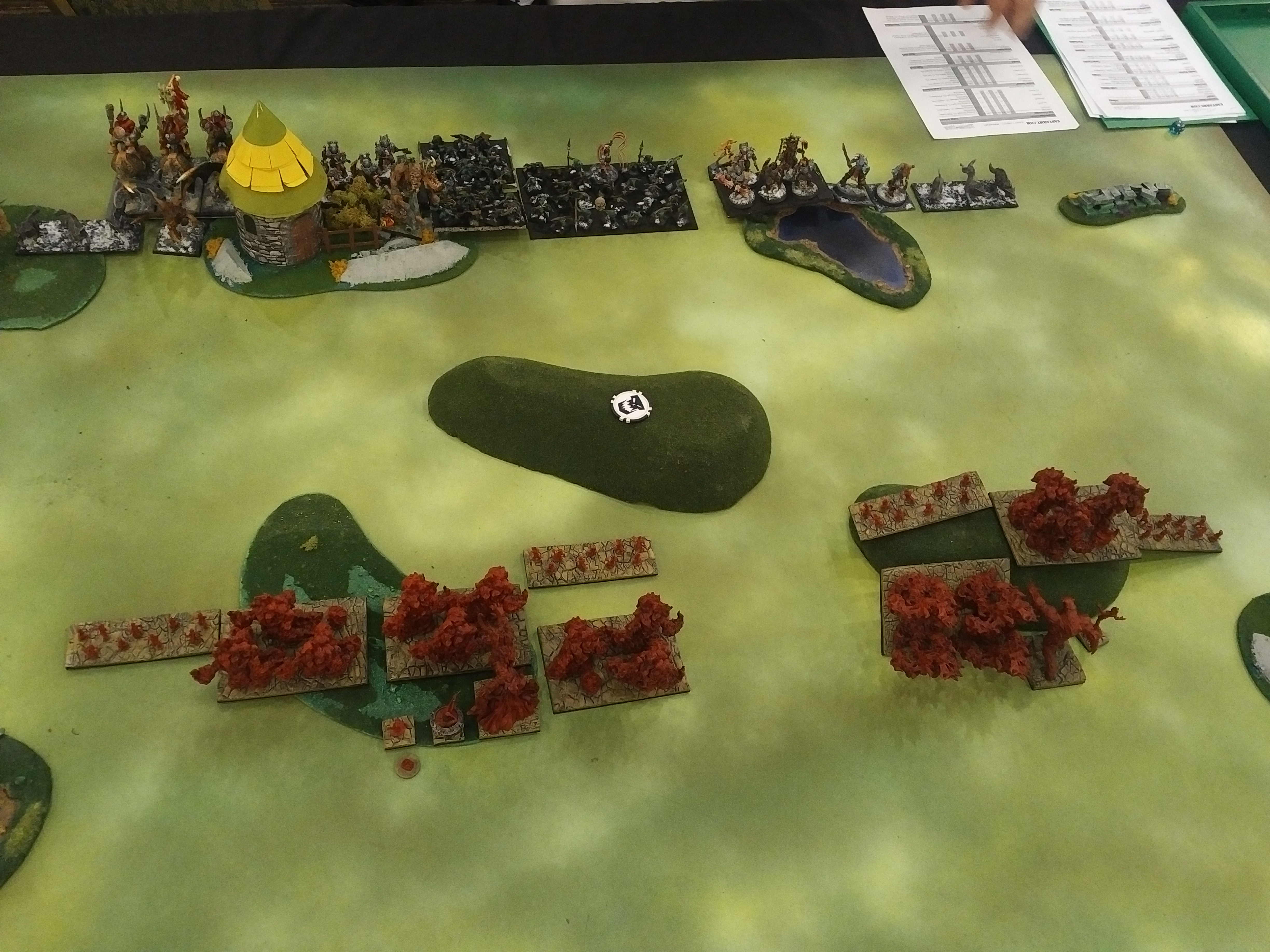 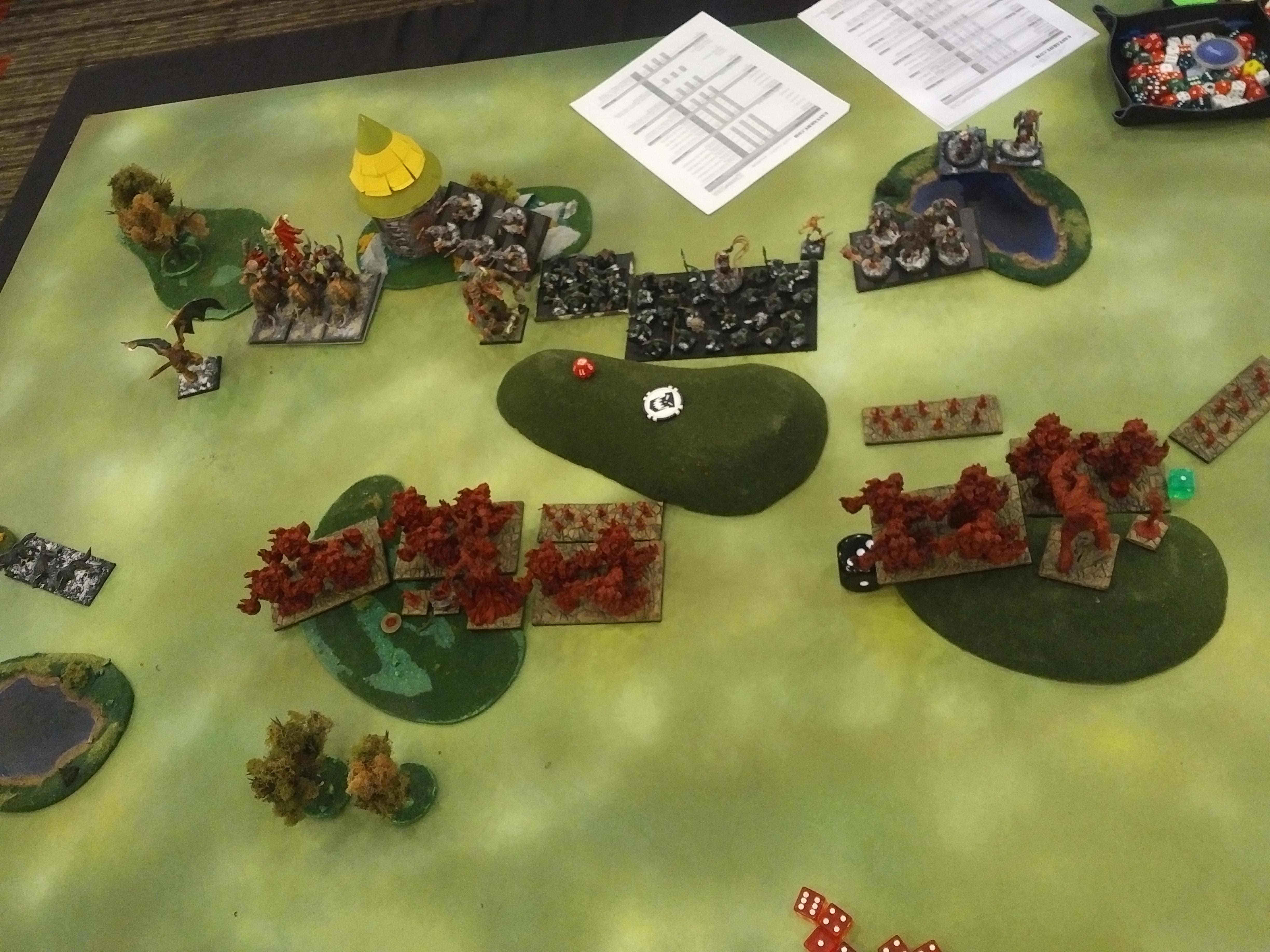 Varangur sally forth in response, a Conclave tagging a wound onto the rightmost Fire Elementals. In Bloodfire 2, the red tide creeps up further, incinerating the Tundra Wolves on the right, flambéing a Thrall regiment that had wandered onto the central hill (where the die is), toasting the Cavern Dweller for 2 damage and gently singeing the right Fallen, who iron resolve the wound away. 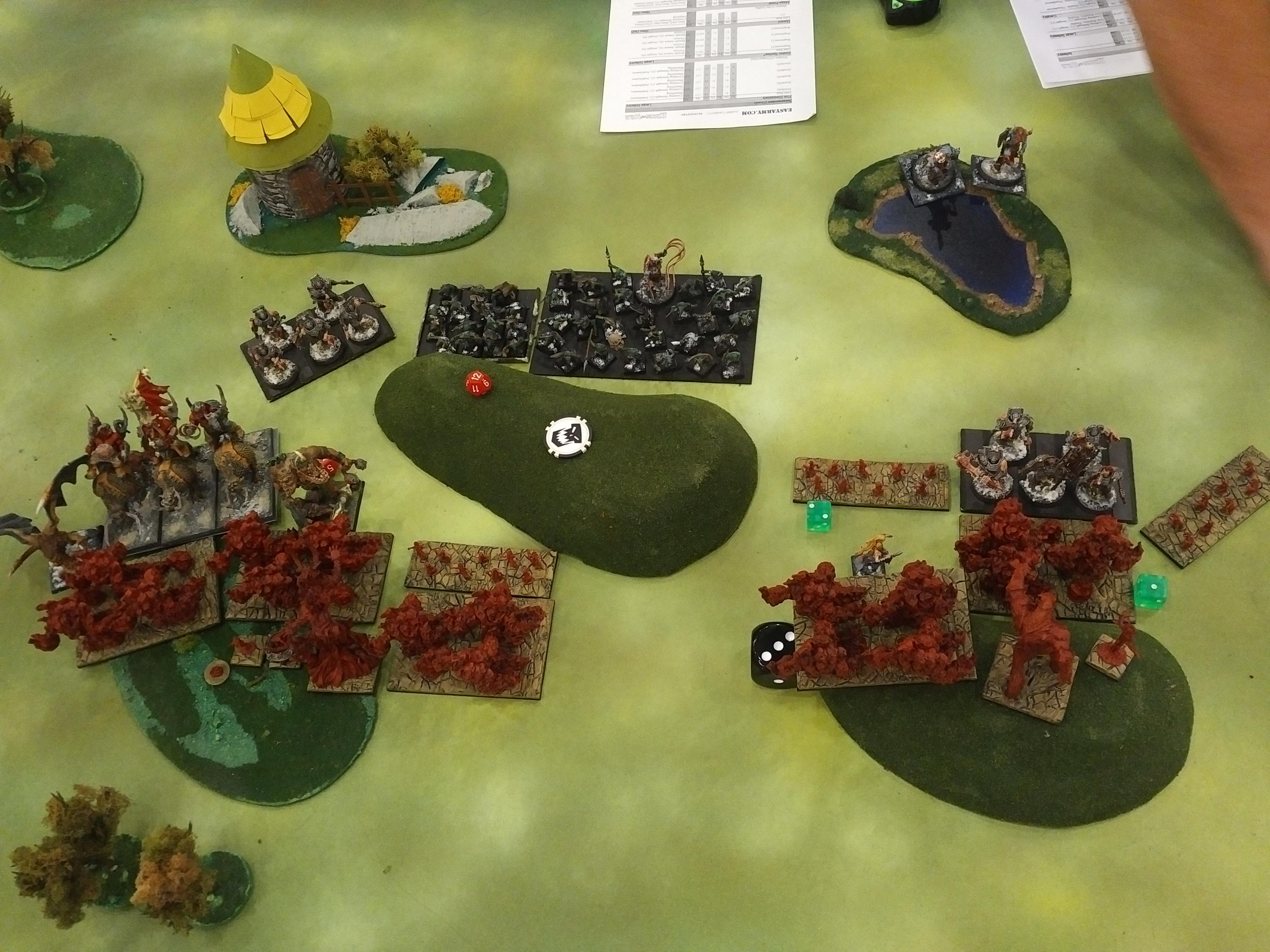 In classic Varangur style, its turn two and time to party! King + Direfangs slam into the leftmost Fire horde, the Cavern Dweller starts grinding on the Diadem horde to their right, Magnilde burns her fly to pounce on one of the right Fire horde and the right Fallen tackle the rightmost Fire horde. A Conclave tags a couple wounds onto a Sprite regiment gunning for them, and its on to fighting. 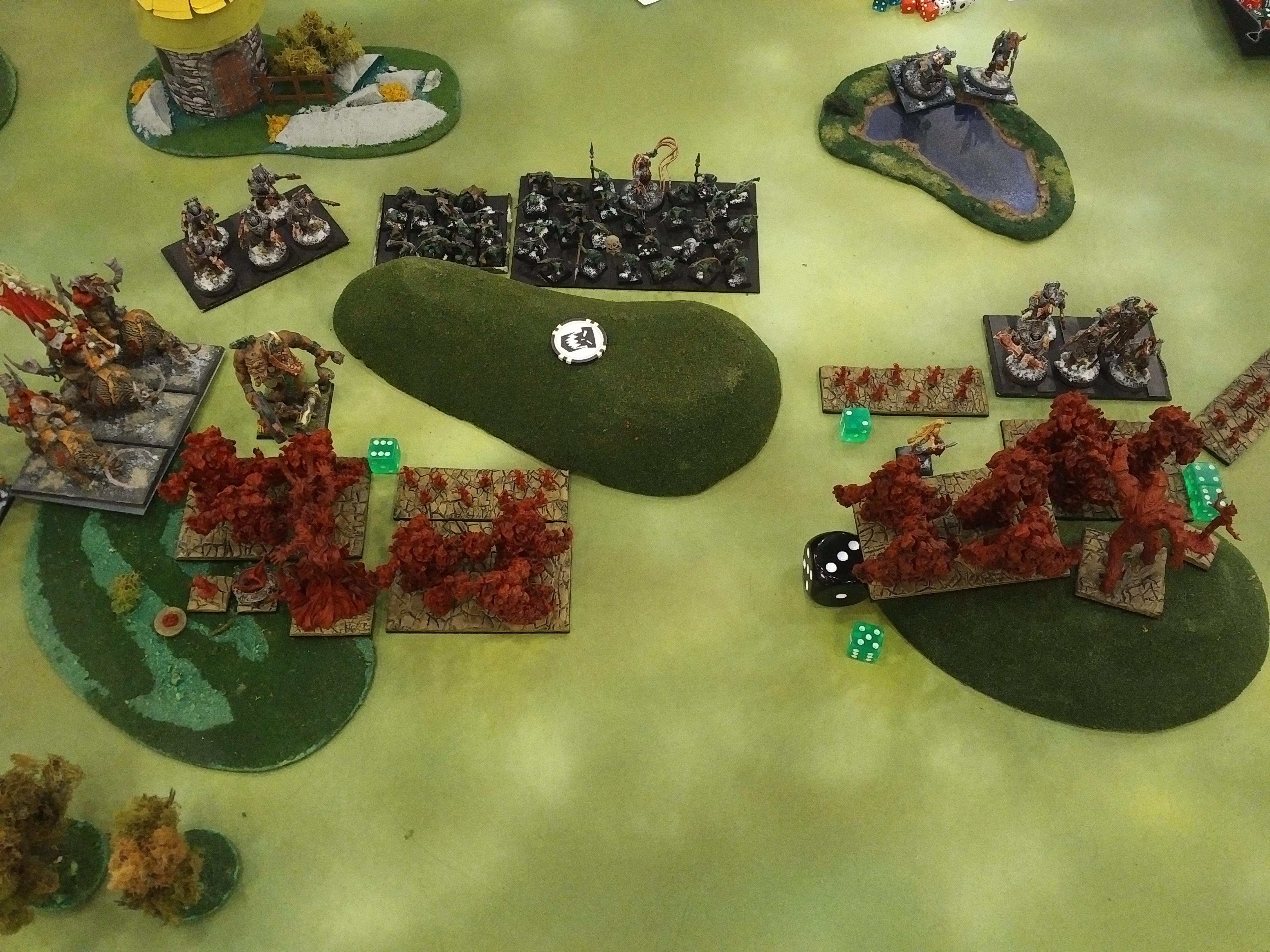 The King + Direfangs splatter their horde, however the other Varangur cant seal the deal with their solo charges. Lots of damage happens but they all backup – Fallen got particularly close with 10 wounds but no lucky double 7. 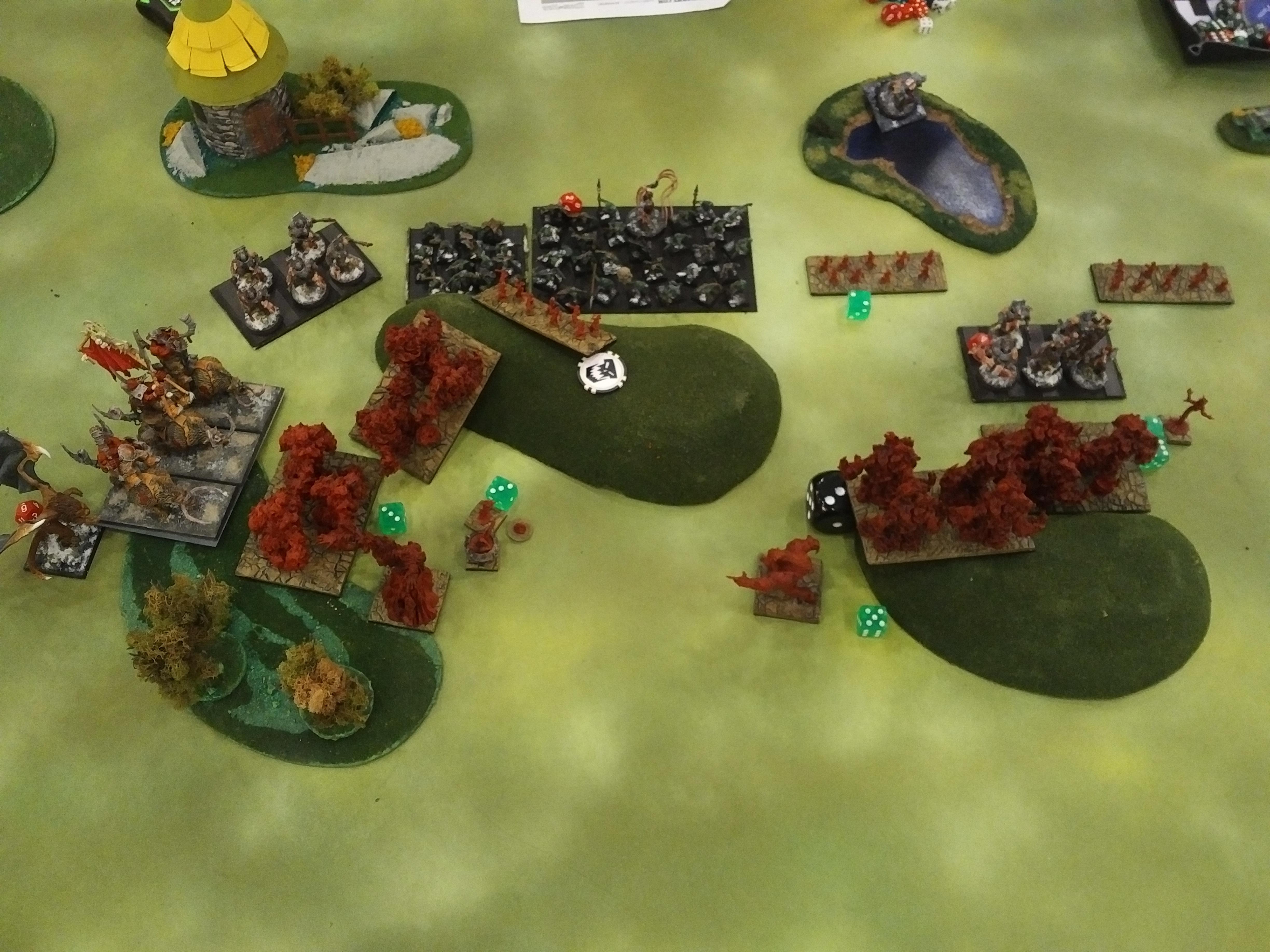 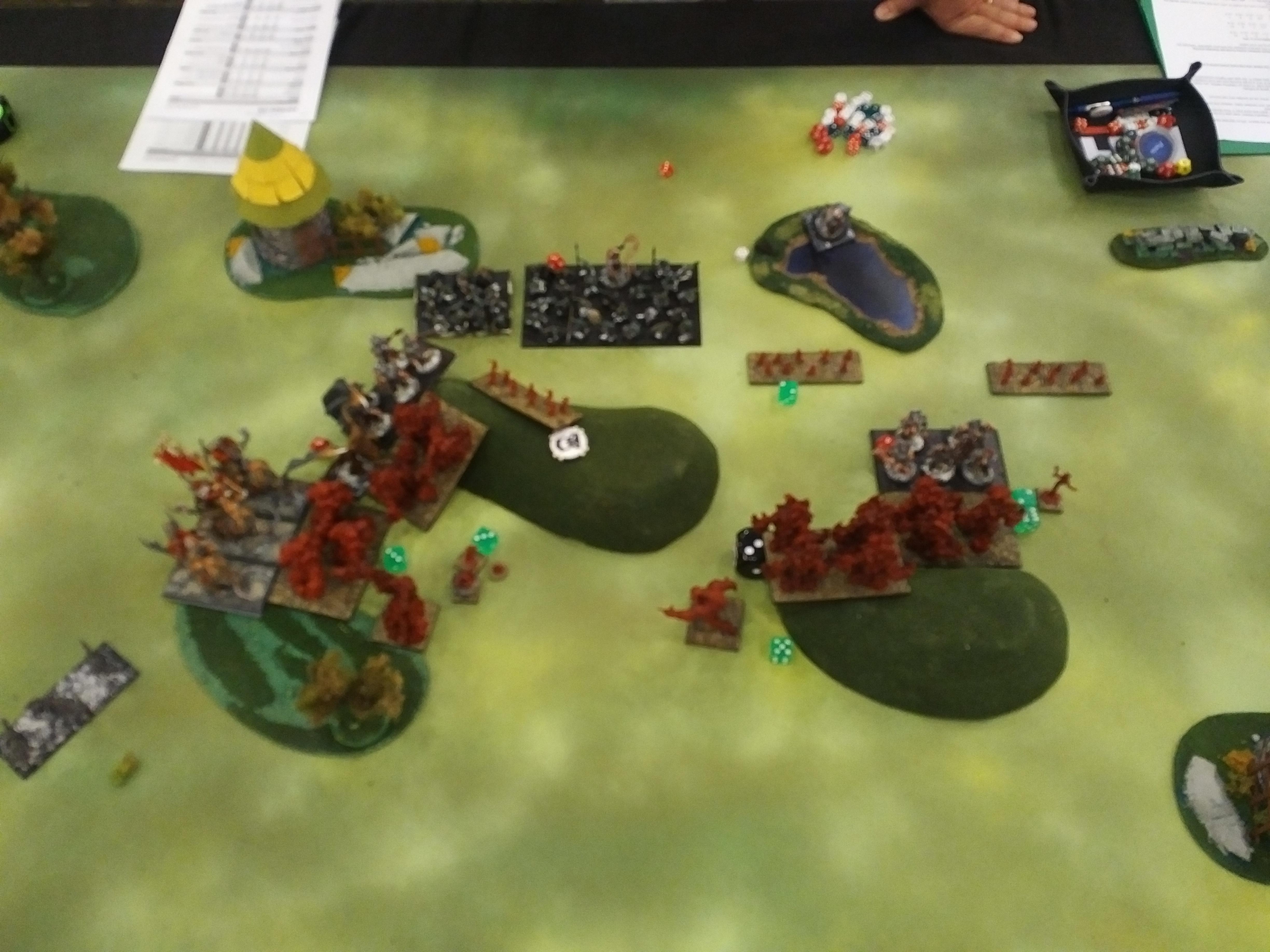 Blurry rage-filled photo is blurry, rage-filled. The Direfangs charge the 3 damage Fire horde, the King + left Fallen take on the fresh Fire horde next to them, and the right Fallen head back into their half-dead Fire horde. The surviving Conclave tags some Sprites for 2 more damage but they hold fast. 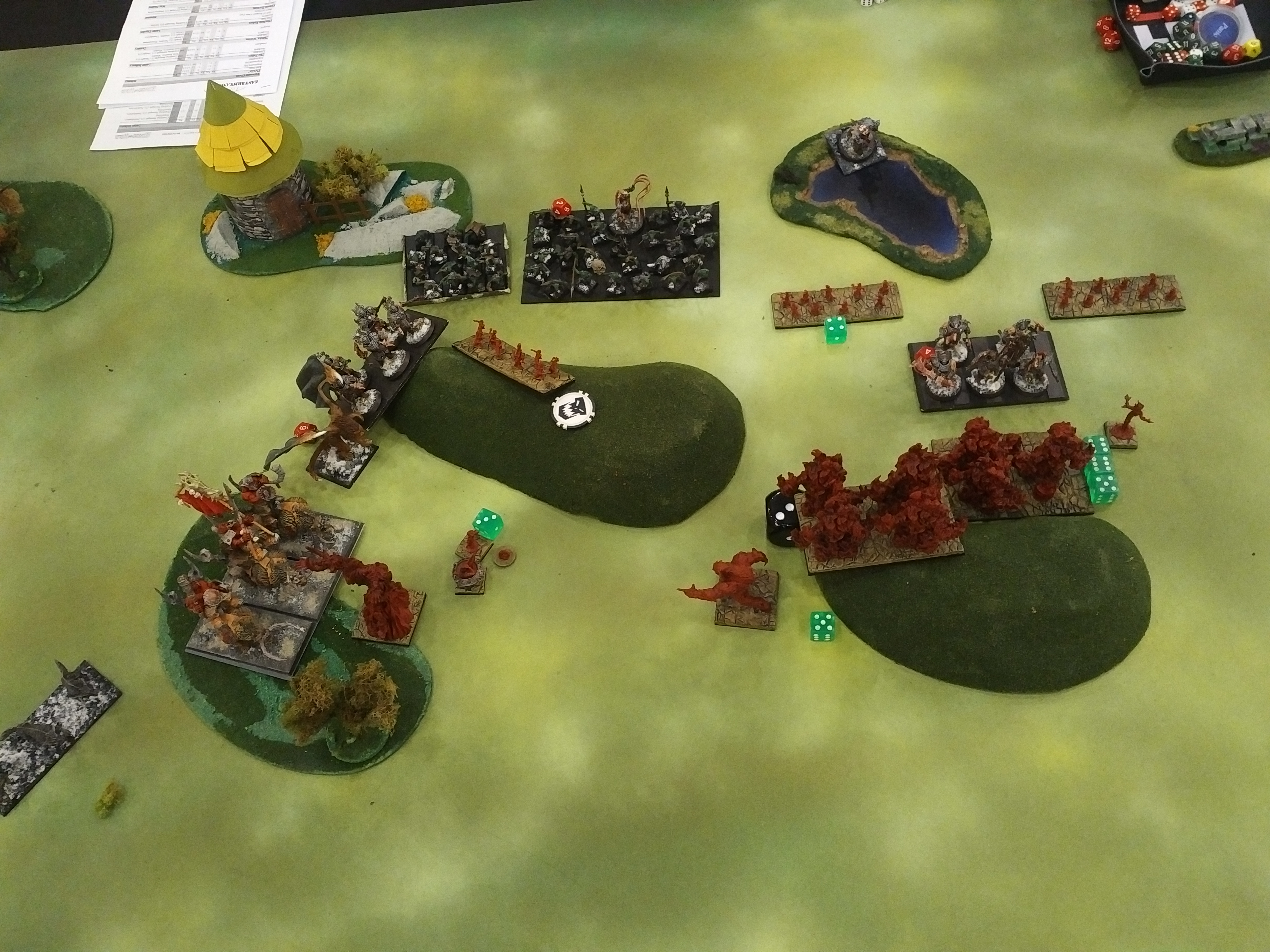 Combat is a mixed, largely painful affair. The Direfangs steamroll through a second Fire horde, really putting that strider to work, as do the King + Fallen, evaporating the Bloodfire flank save for Agnes and support staff. On the right, the Fallen do admirable damage (16 total) but double ones it ;D 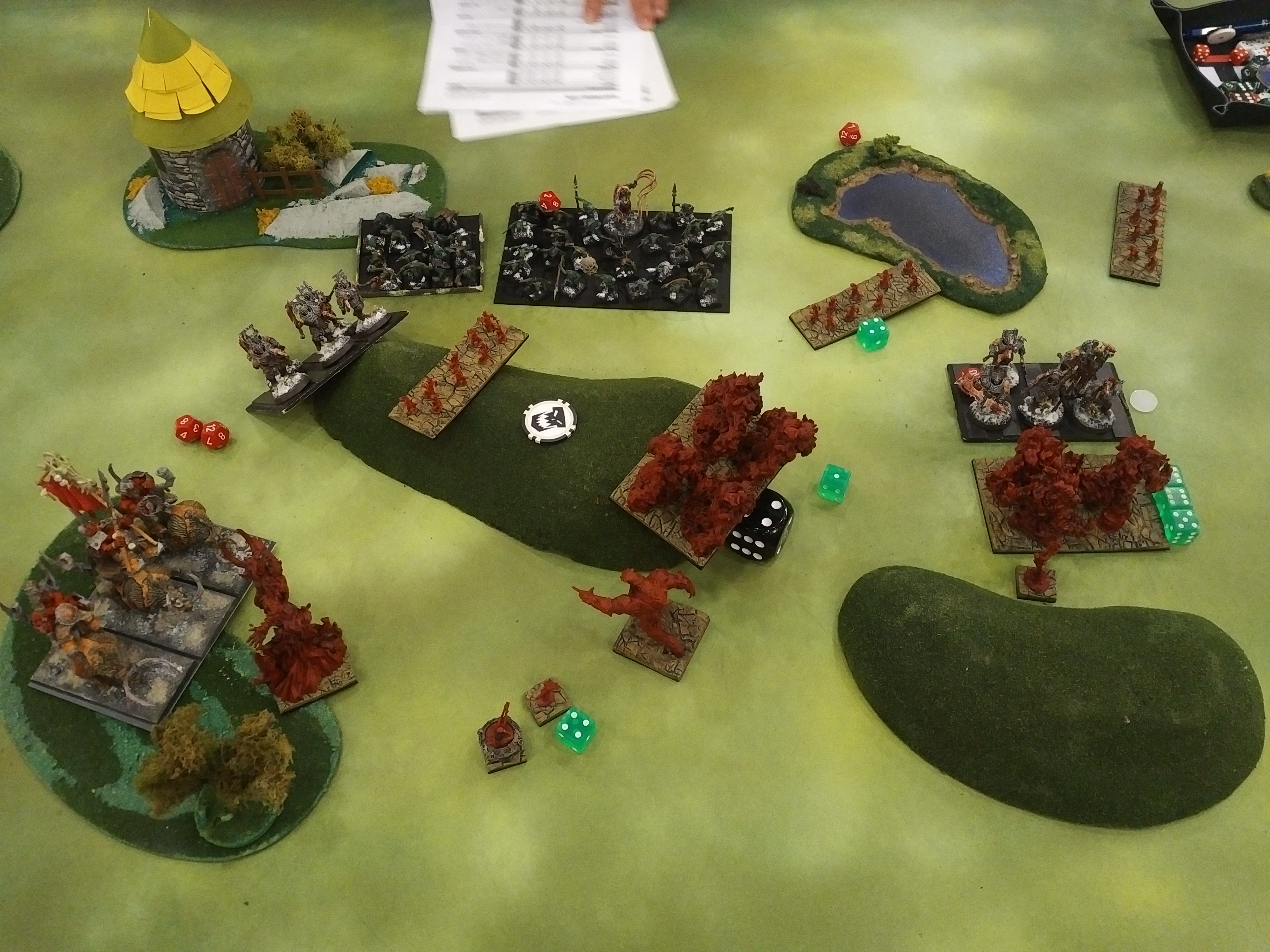 Bloodfire 4 is a whole hell of shooting with a side dish of punching Fallen. Agnes + CLOFD + Sprites + the little Mage-Priest unload into the King on Chimera, erasing him from existence. The Fallen next to him cop a couple wounds in the process, once the King hit 18 damage 😛 The other Conclave is killed by marauding Ember Sprites shortly before the right Fallen are wavered by their Fire horde. 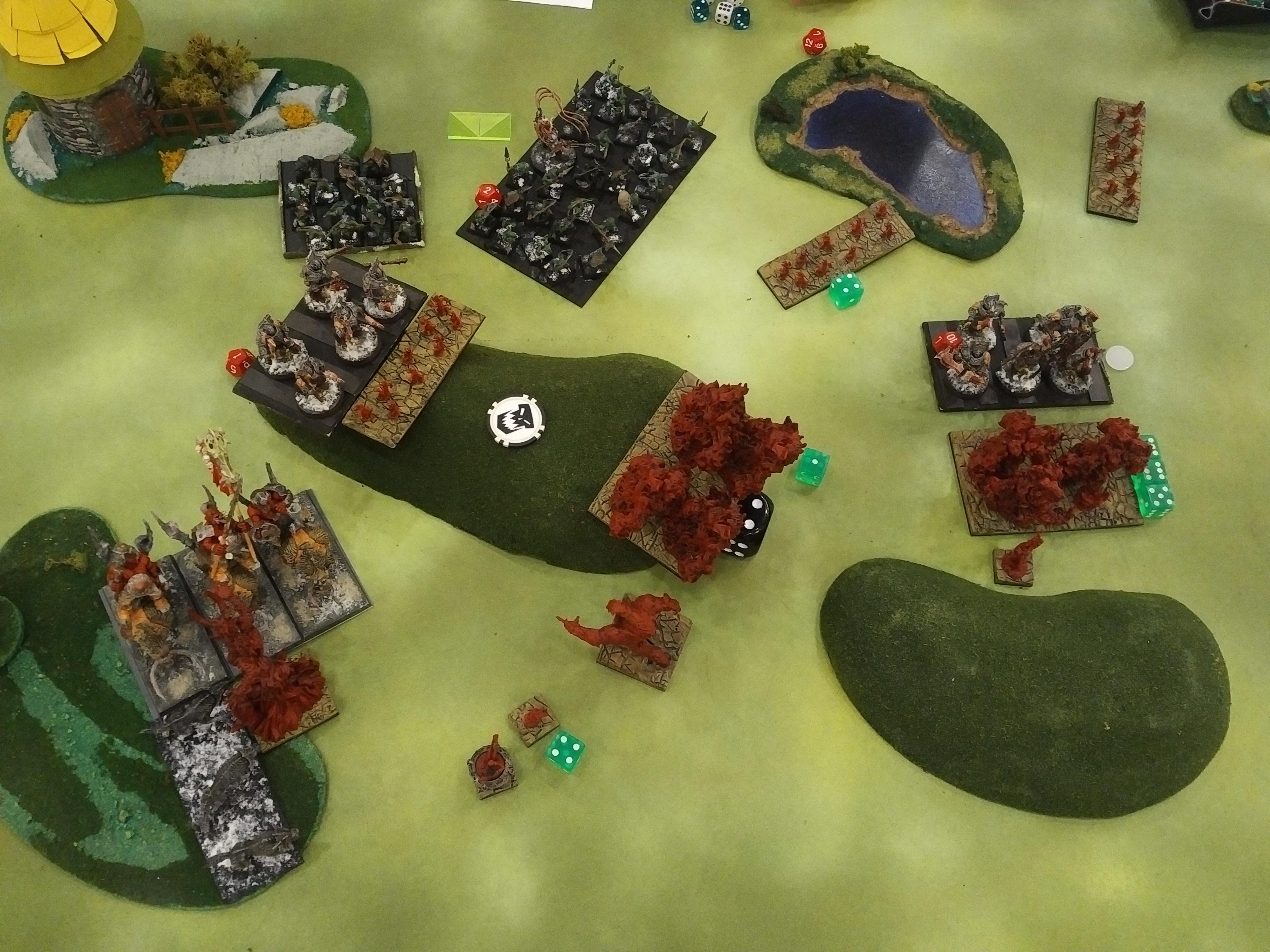 Thralls shuffle about in the absence of their King, whilst the Fallen on the hill kick some Sprites and the Direfang lawnmower charges Agnes, Tundra Wolves supporting in her flank (hindered). 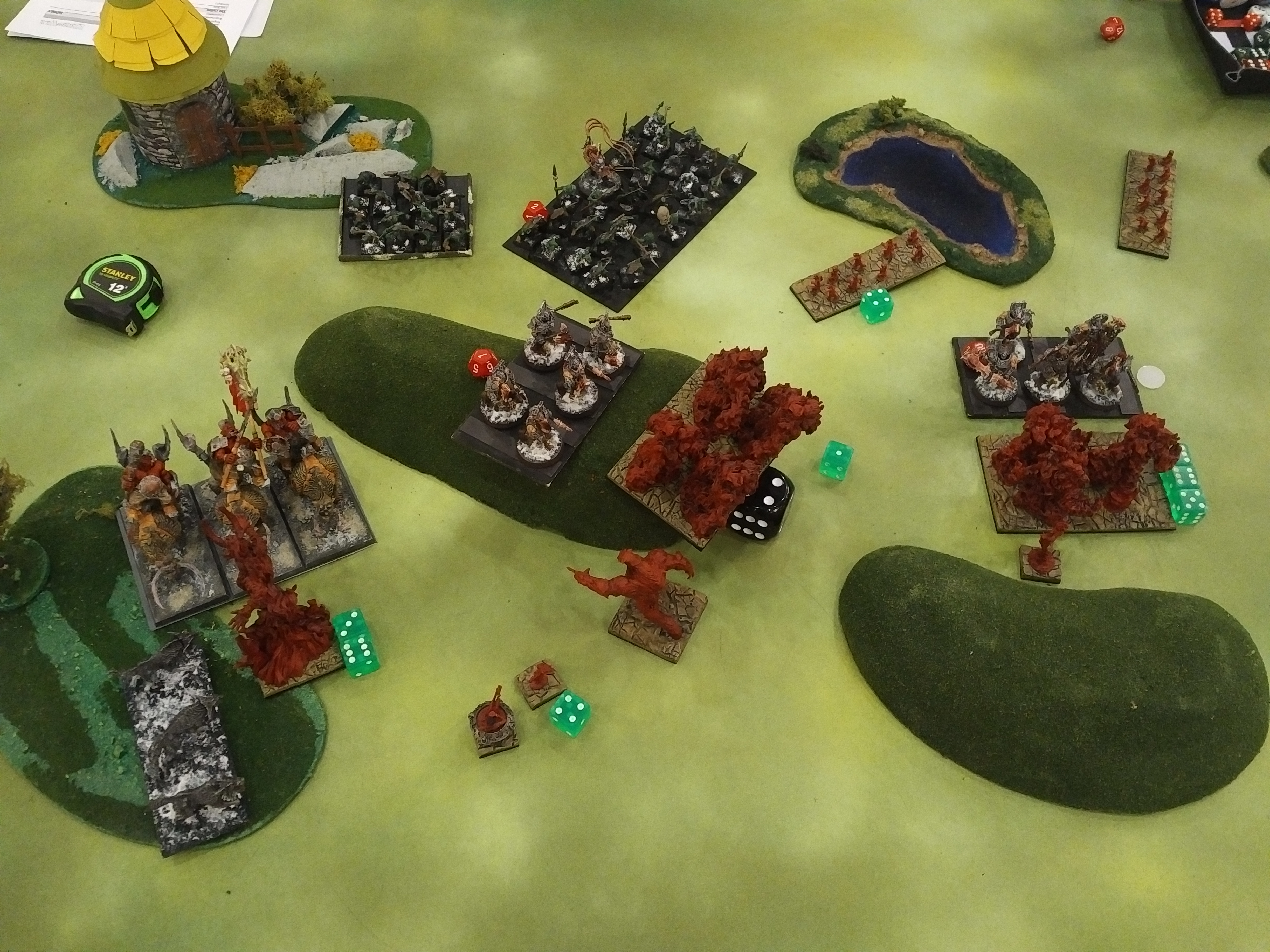 Hill Sprites are punted and the Fallen overrun, and -/20 Agnes takes 9 damage but tanks it like an enormous legendary fire creature. 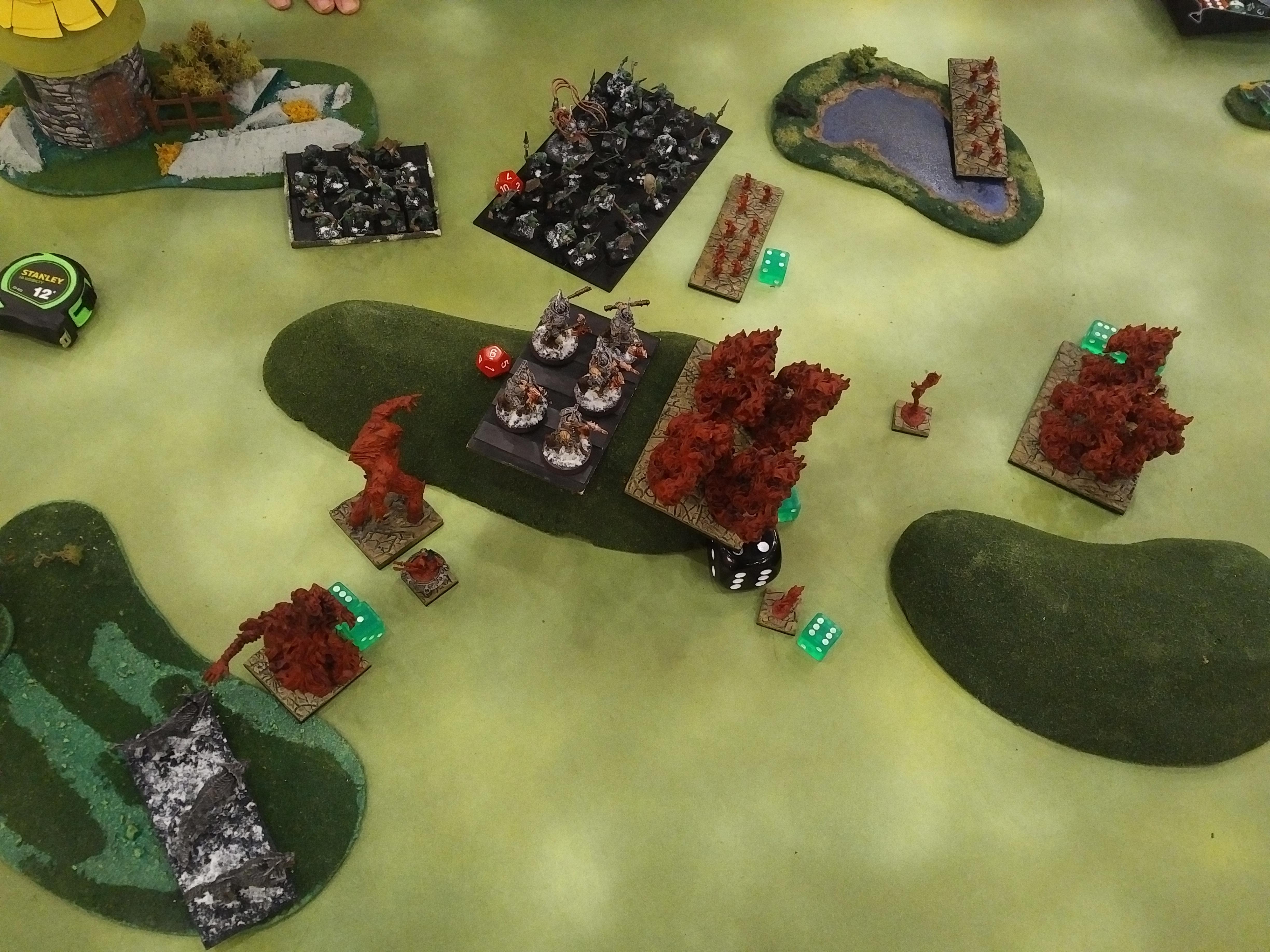 Bloodfire 5 and the game feels firmly in Salamander claws, but theres plenty of fighting left. Agnes counter-charges the Direfangs, with flanking support from the CLOFD (it came down to a dice off whether he was in). The right Fire horde goes one more round with their Fallen, and after a cheeky diadem breath, the Diadem horde is surged into the other Fallen. The Direfangs are smashed under monstrous, molten fists as are the beleaguered right Fallen, but the center Fallen hold fine. Meanwhile, the Thrall legion absorbs Sprite breath and Agnes is prayed down to 7 damage by the lil Mage-Priest. 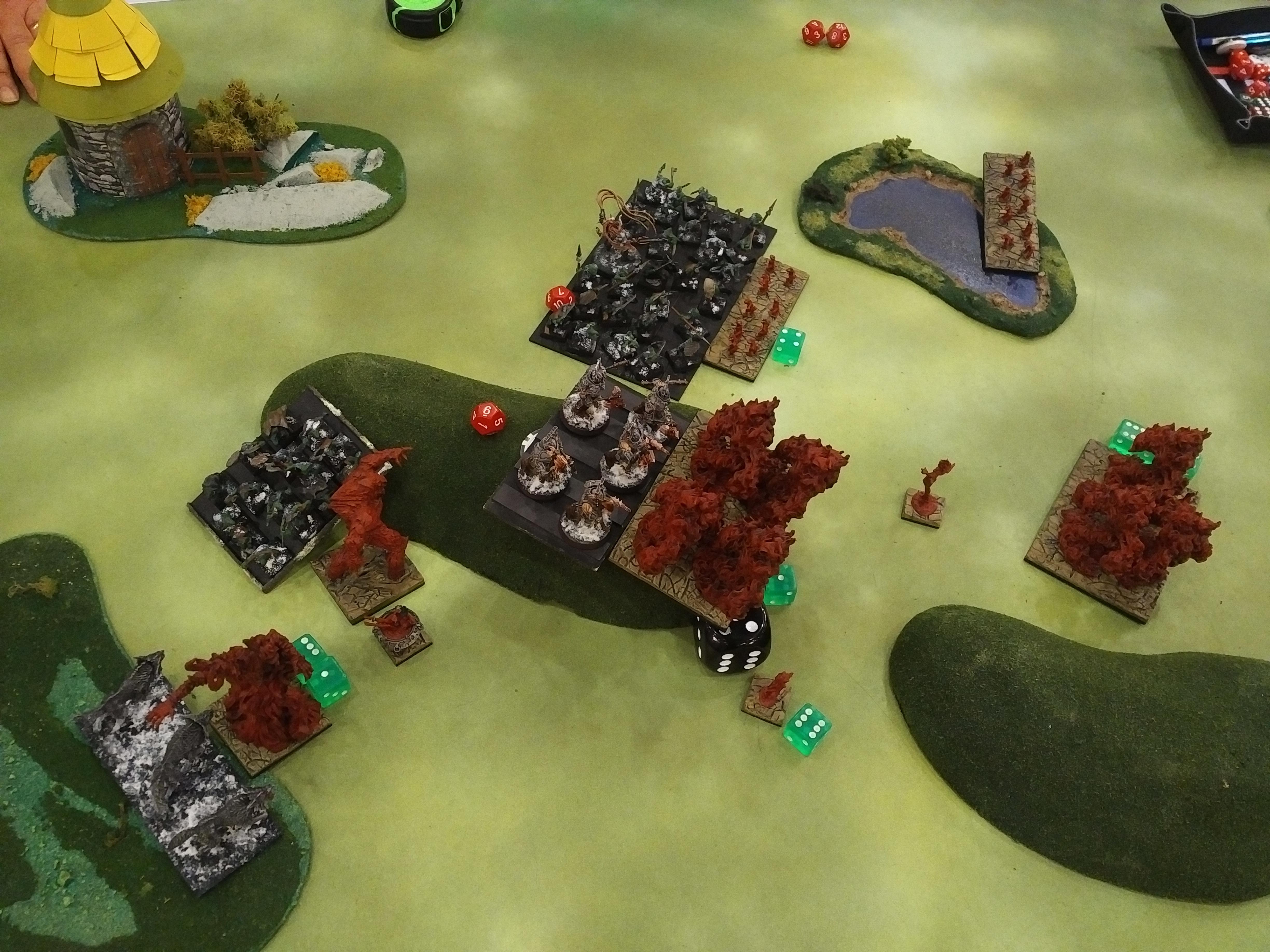 Everybody fights! Tundra Wolves have a go at Agnes front this time (hindered), the Thrall regiment spots the flank of the towering CLOFD and charges in (I totally missed this!), the Fallen have a go at the Diadem horde and the Thrall legion prepares to feast on Ember Sprite. 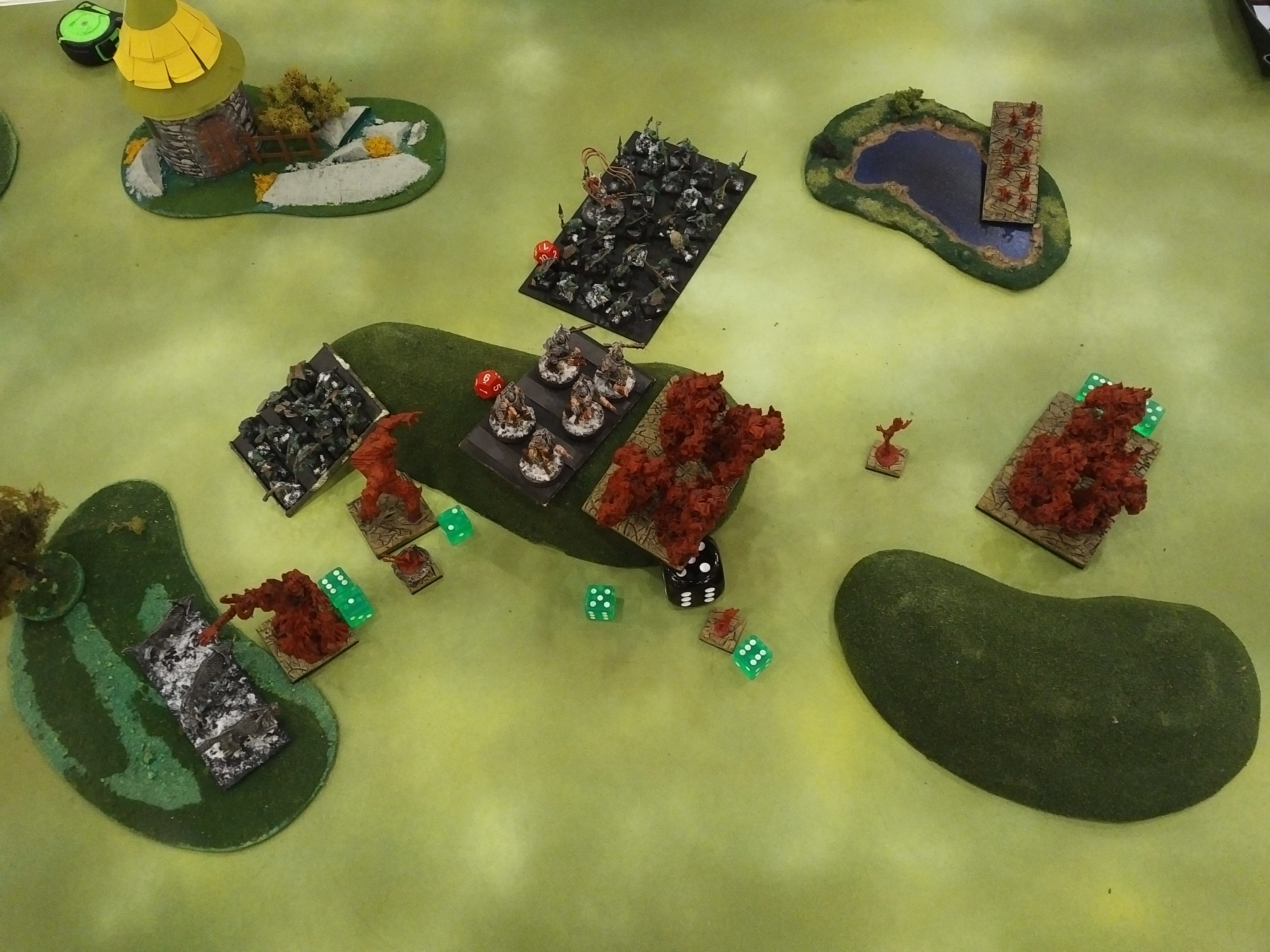 Wolves cant hurt Agnes, Thralls stab 2 wounds into the CLOFD, the Diadem horde goes up to 5 but whatever, and the Thralls have a nosh. 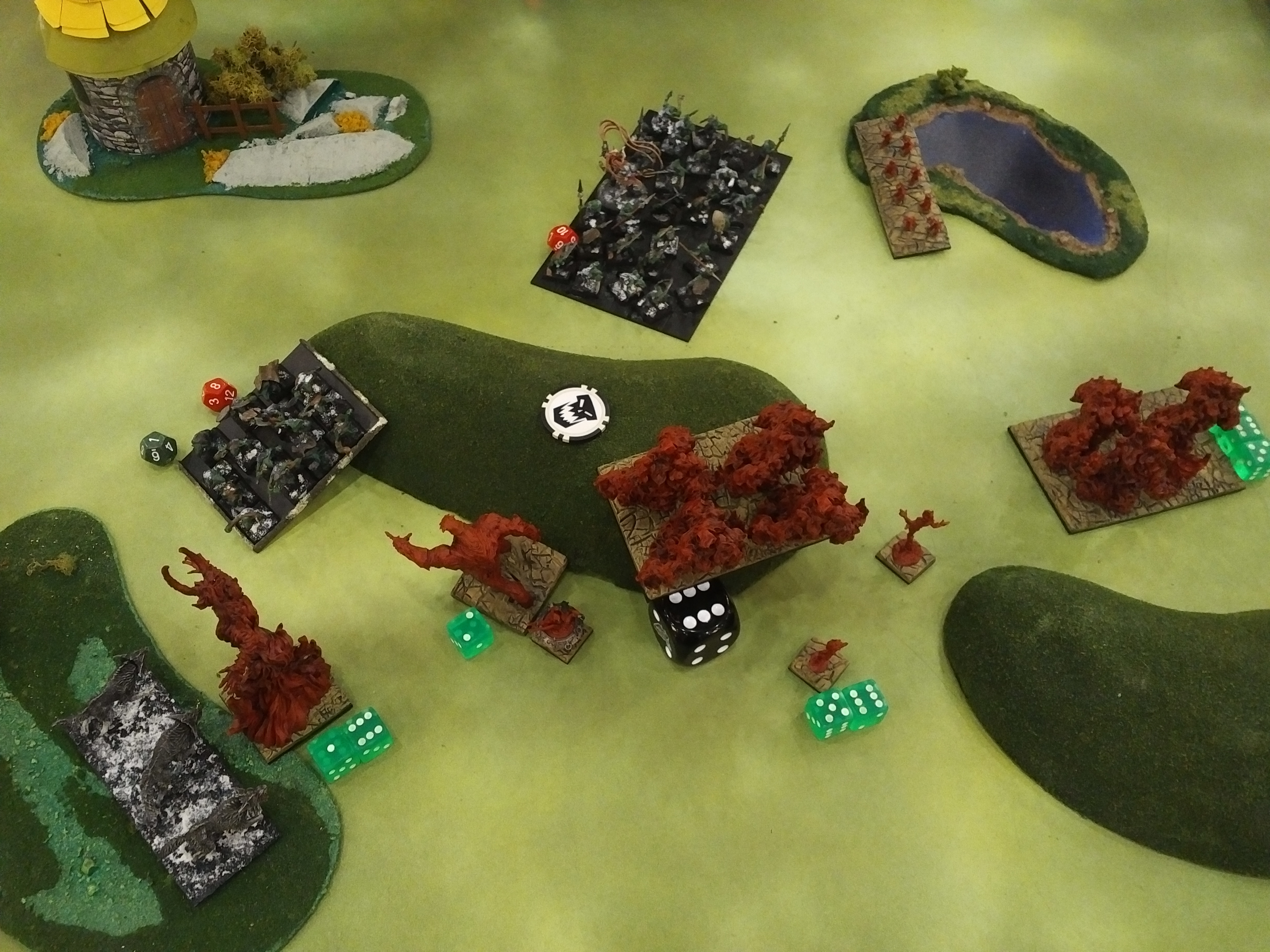 Bloodfire 6 in dominate means consolidating my lead and closing this one out. Its currently 9 to 8 (nimble on the Fallen makes them -1 US). Center Fire horde charges into the last Fallen, routing them (9 to 6), and Martyrs Prayer + heal brings them down to no damage. Agnes, not disordered, and the CLOFD turn their attention on the Thrall regiment but can only waver that Varangur nerve. The Fire horde on the right shuffles into the 12 zone, knowing that at 17 damage its an insta-rout, but hoping the last of the Sprites have blocked enough of the legions charge path. 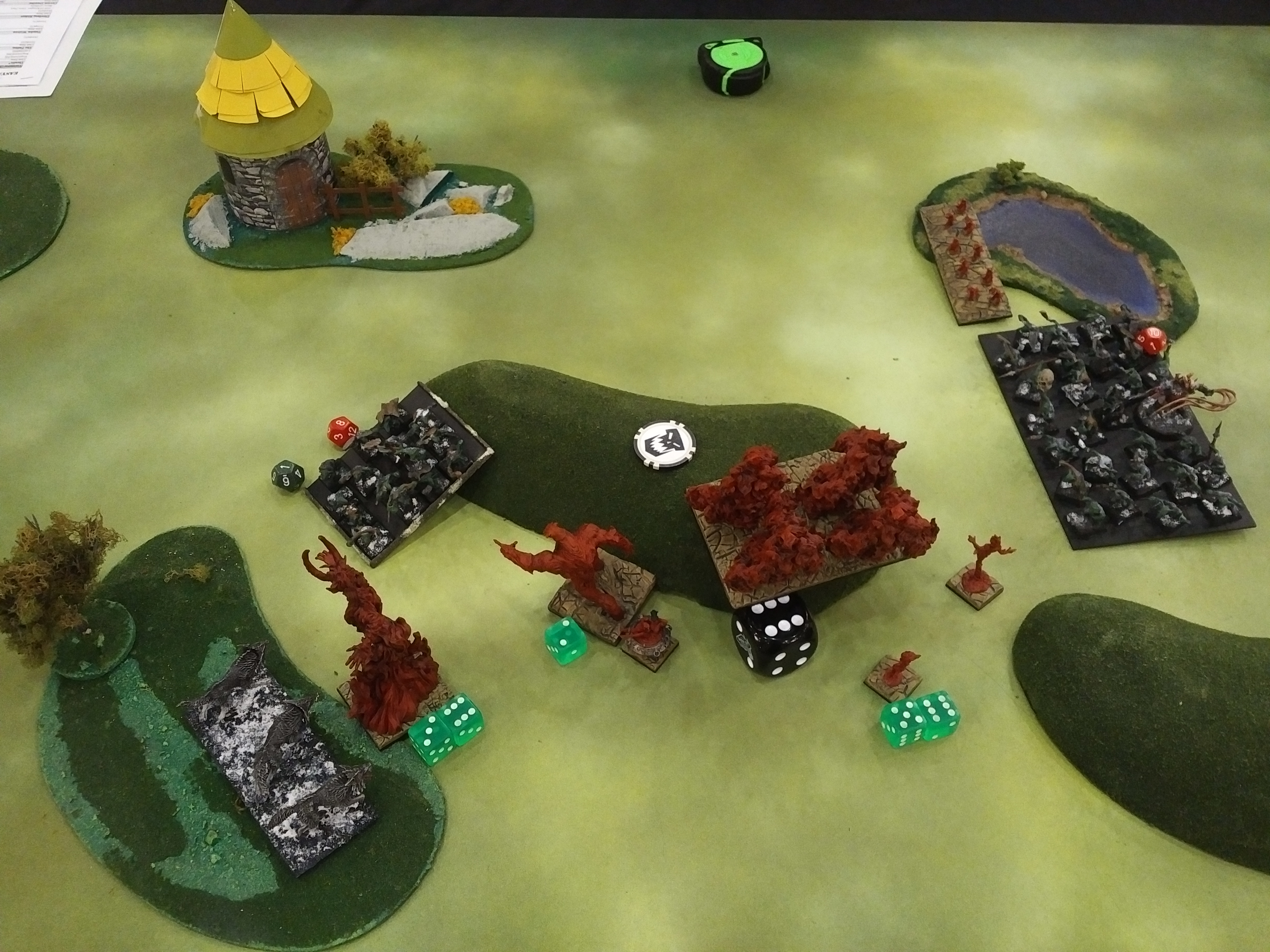 Last gasp for the Varangur is the Wolves back into Agnes flank (hindered) for a couple wounds, but mostly the Thrall legion scooting past the Sprites and popping the mangled Fire Elementals. The game goes to 6 to 6

and theres no Turn 7, which would have been an easy Bloodfire victory.

This was a fun one, with some powerhouse rolling on the Varangur part, a good display of the strength of breath weapons on hard targets on the Sallies part, and a snake eyes that tipped the game into my hands until it slipped away again. Always happy to go 1-1-1, and cool to finally play Tim.

Up Next: DWARFS IN THE AM