Anyhoo, second round is Ray and his rats, an army I play myself but have rarely faced. There were four rat armies at this tournament, and all of them ended up on the top five tables come round five, if that says anything. 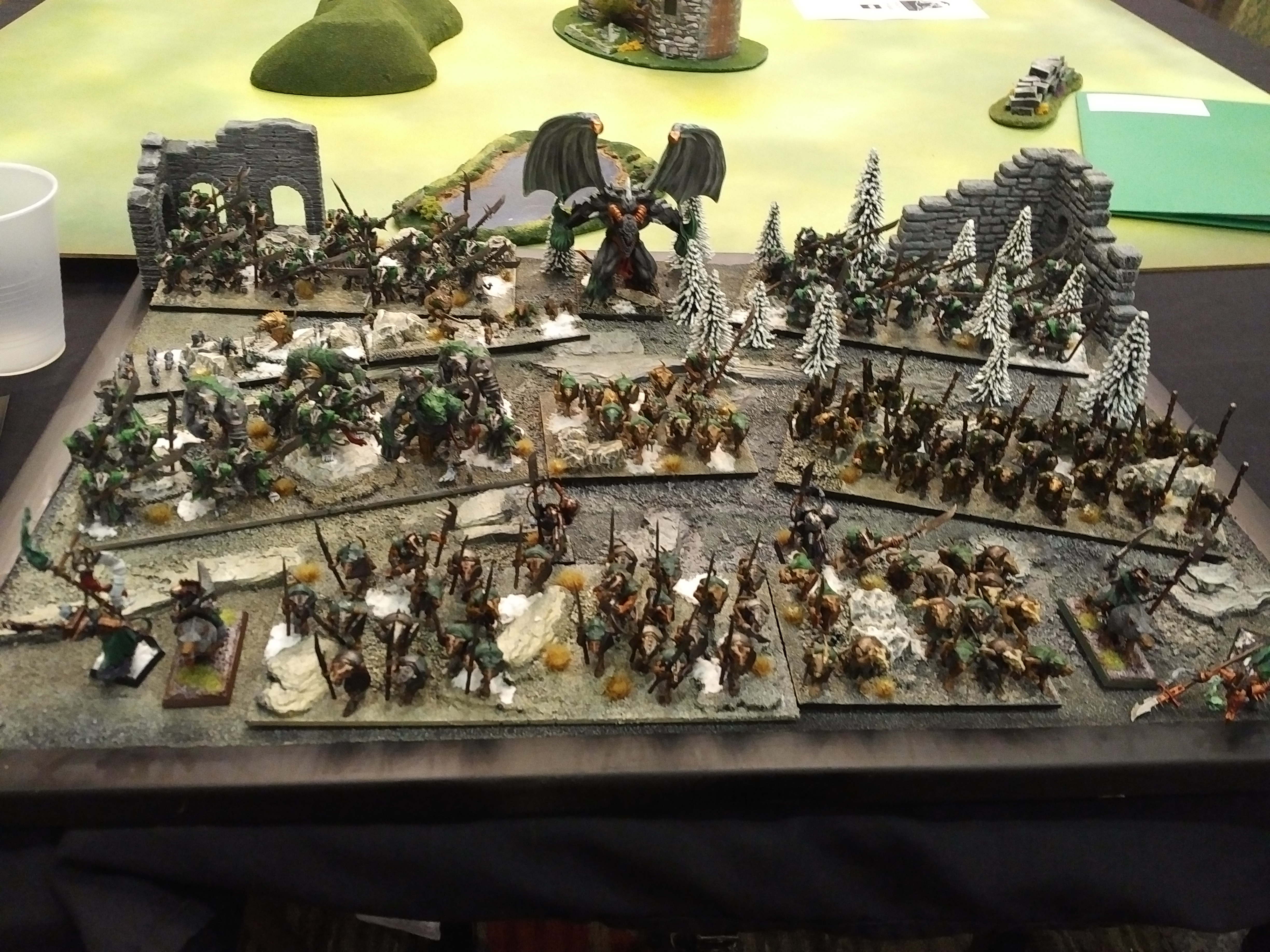 Im not going to say its the best Ratkin list, simply because you can play the army pretty differently and still do great (note the suspicious lack of Death Engines and Weapon Teams here), but its got a smart formation and triples down on what may be the best line unit in the game. Plus lots and lots of bodies for the scenario

Second round was Pillage, a scenario my army is not good at, which is a fact I probably over-focused on going into this game. Rolling maximum counters (7), against a horde army piloted by a very competent player (I heard Ray is the highest ranked player in the Mid-Atlantic currently?), meant I was pretty much resigned to my fate. Ratkin won initiative as well and took it. 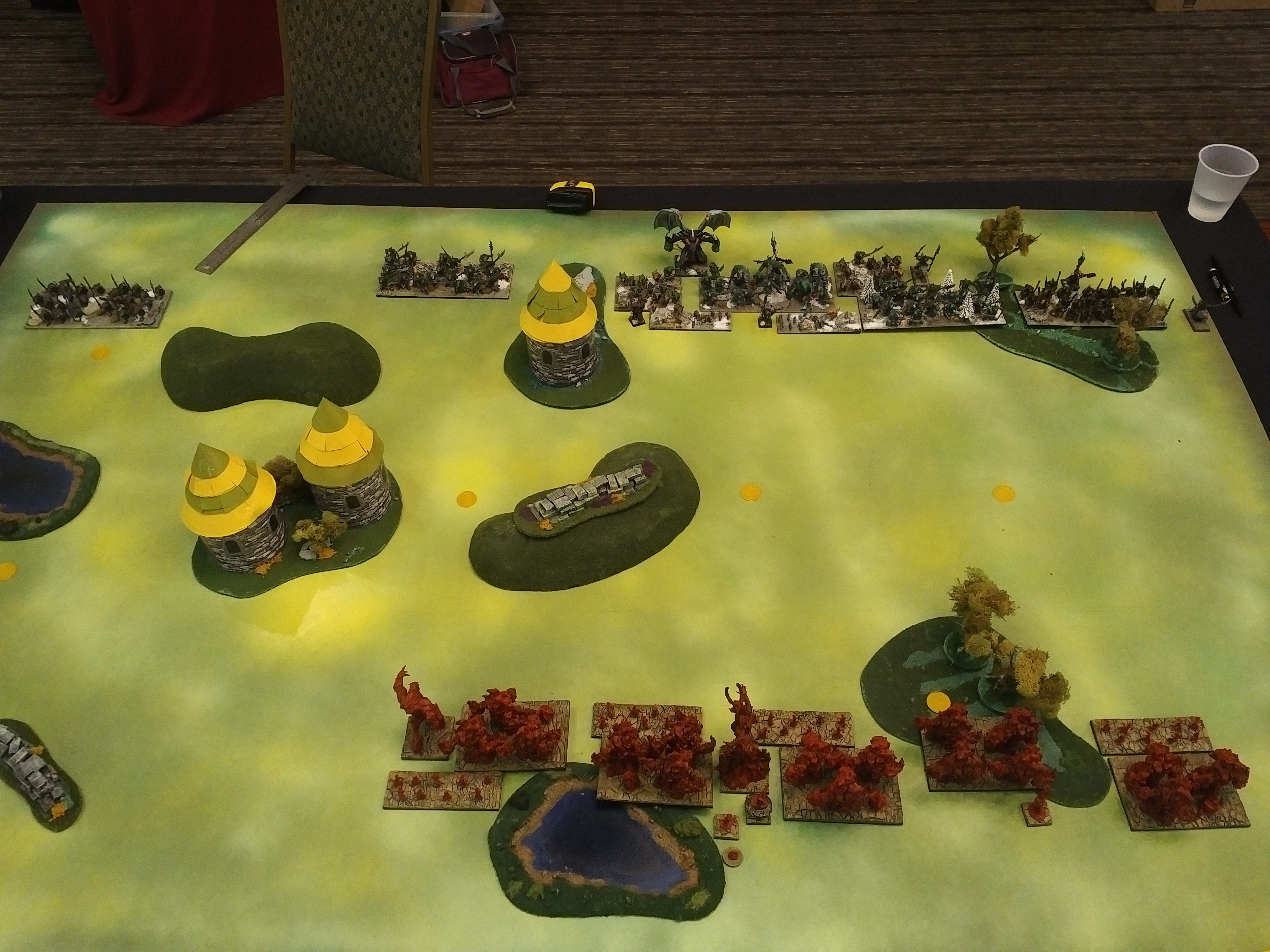 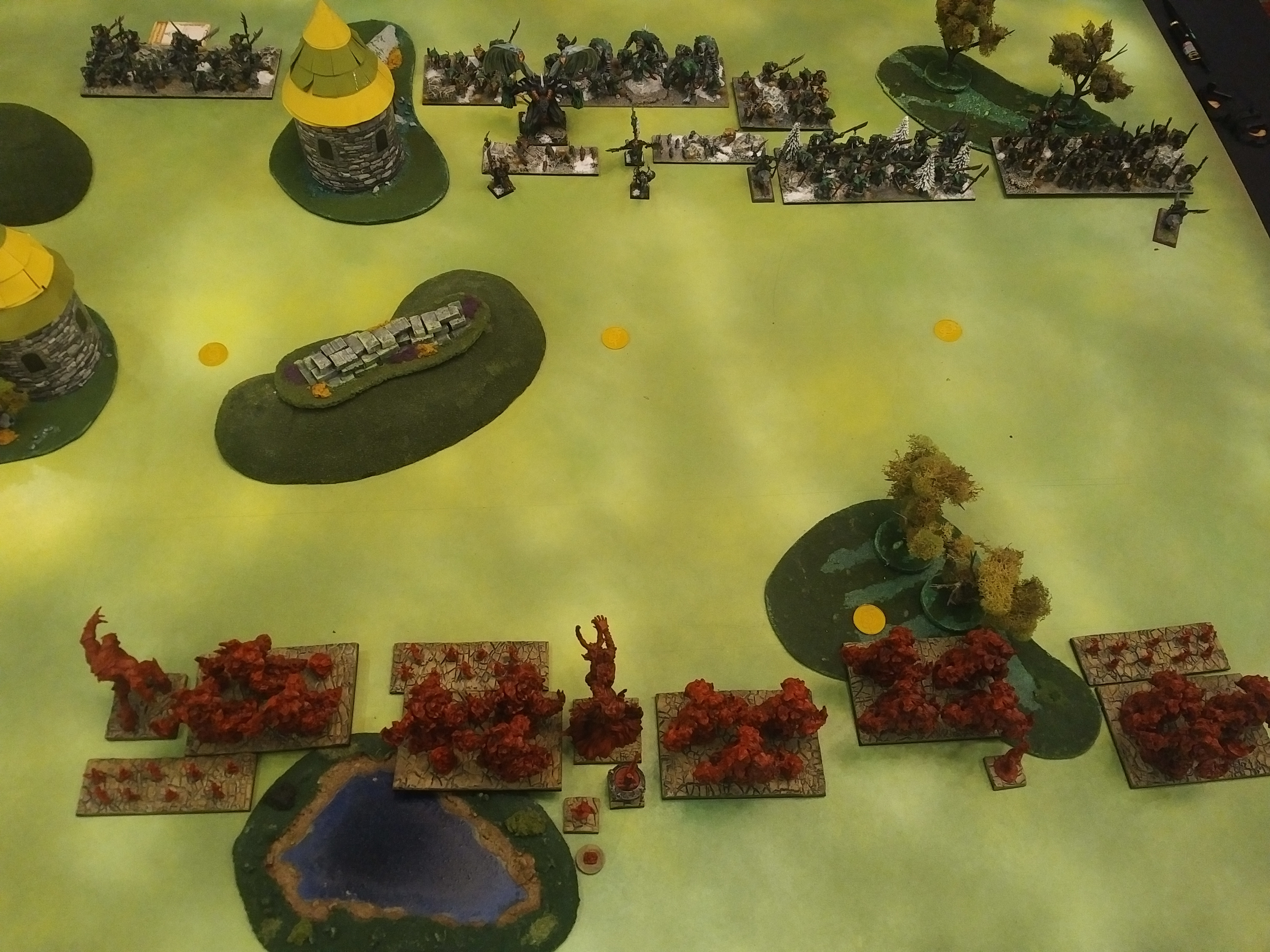 Rats roll out, with the Warrior horde going far left to claim one of two tokens (just barely too far apart to claim them both). The +1 to hit Shock Troops are on the left, the +1 CS ones are mid, the pathfinding ones leaving the forest on the right, and the Blight are the rightmost horde. Rat shooting lightnings an Ember Sprite reg off the field, because Ray was more concerned about them than most of the army 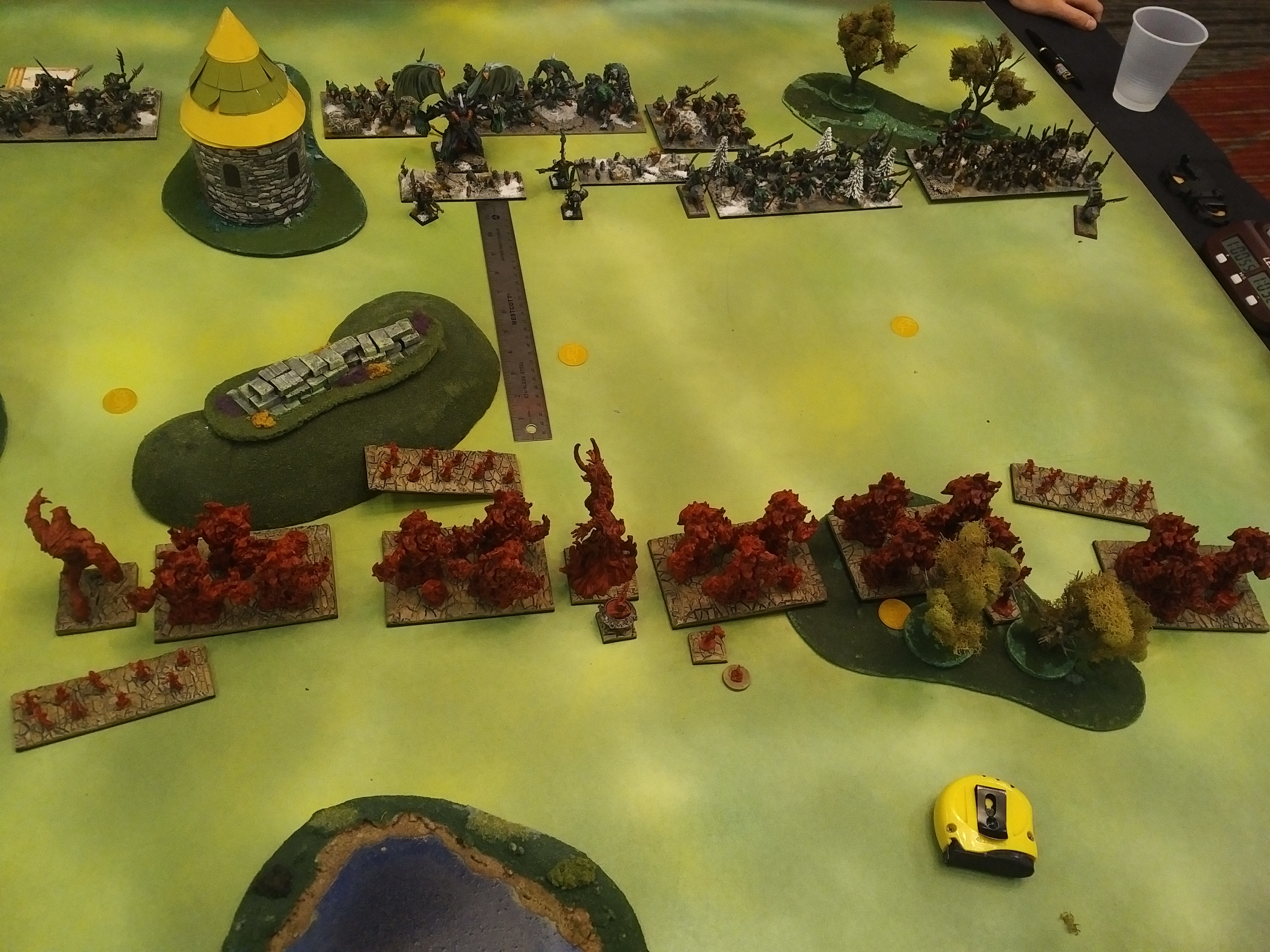 Bloodfire shambles forward, but the cagey rats are all out of breath range and theres nothing to heal. 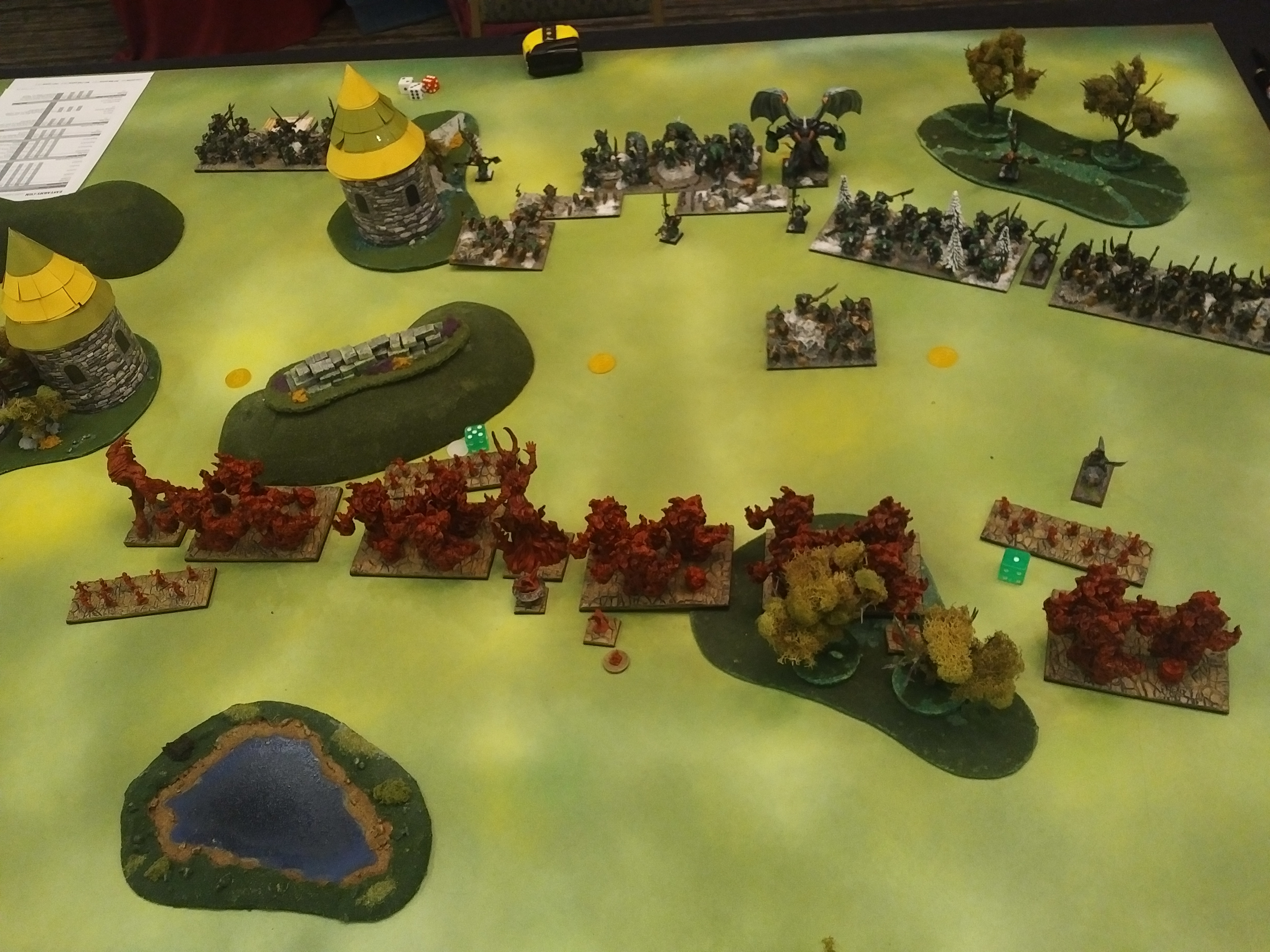 The Ratkin maintain the standoff, except for the Warrior regiments, goaded into bait range, and the Enforcer, who charges the right Sprites and disorders them. The remaining central Sprites are lit up with lightning and wavered. 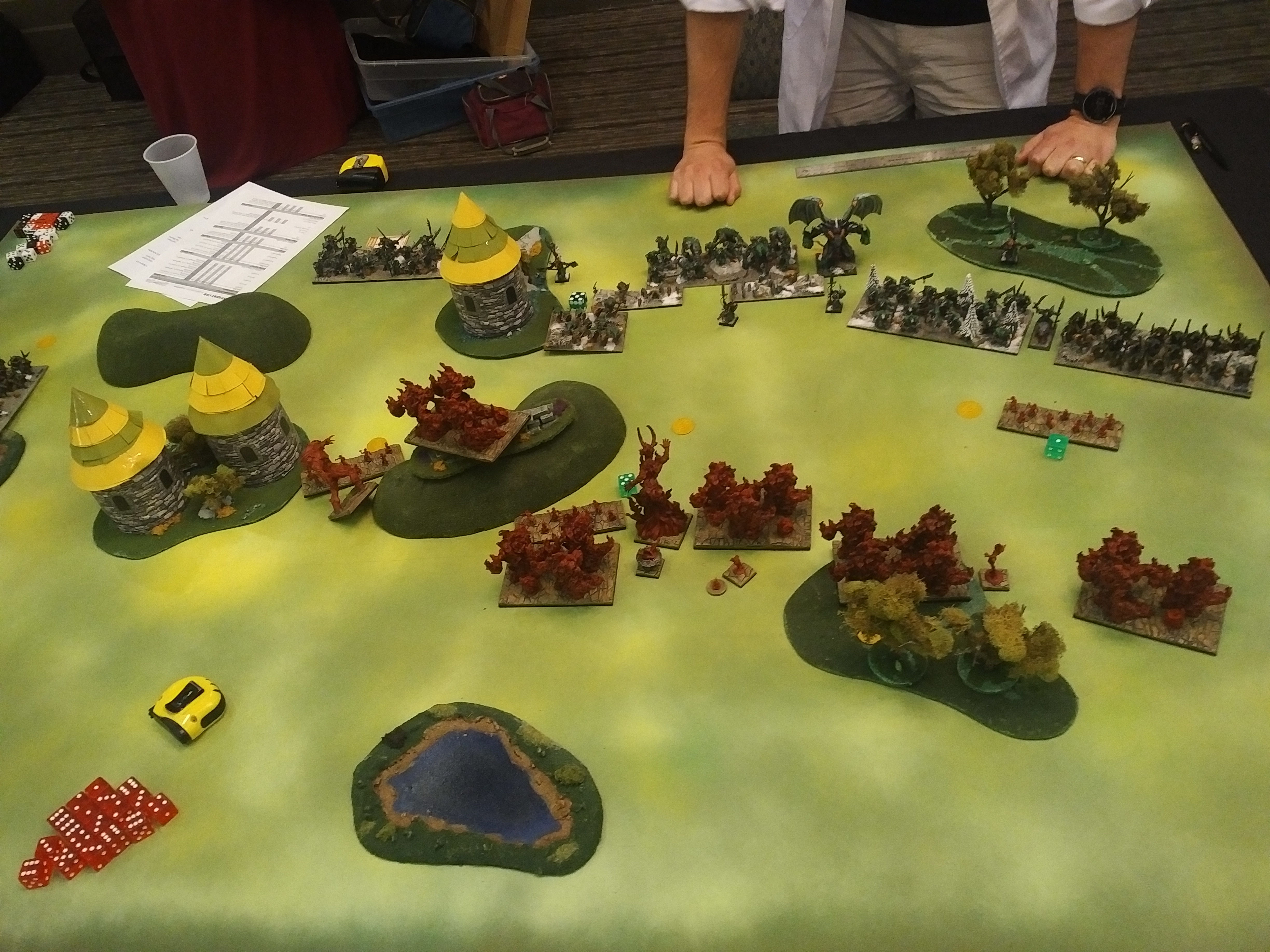 Given something to destroy, Bloodfire obliges. On the left, Sprites + Clan Lord breath on the left Warriors for 5 damage (but no waver), while Agnes + Diadem horde + both Mage-Priests incinerate the other, obviously bait Warriors. I advance my own, less obvious bait Fire horde in the center, and on the right the Enforcer is shredded by a combo-charge from the Sprites + Fire horde, with the Sprites advancing 6 and the Fire horde backing up 2-3. Things should get spicy next turn 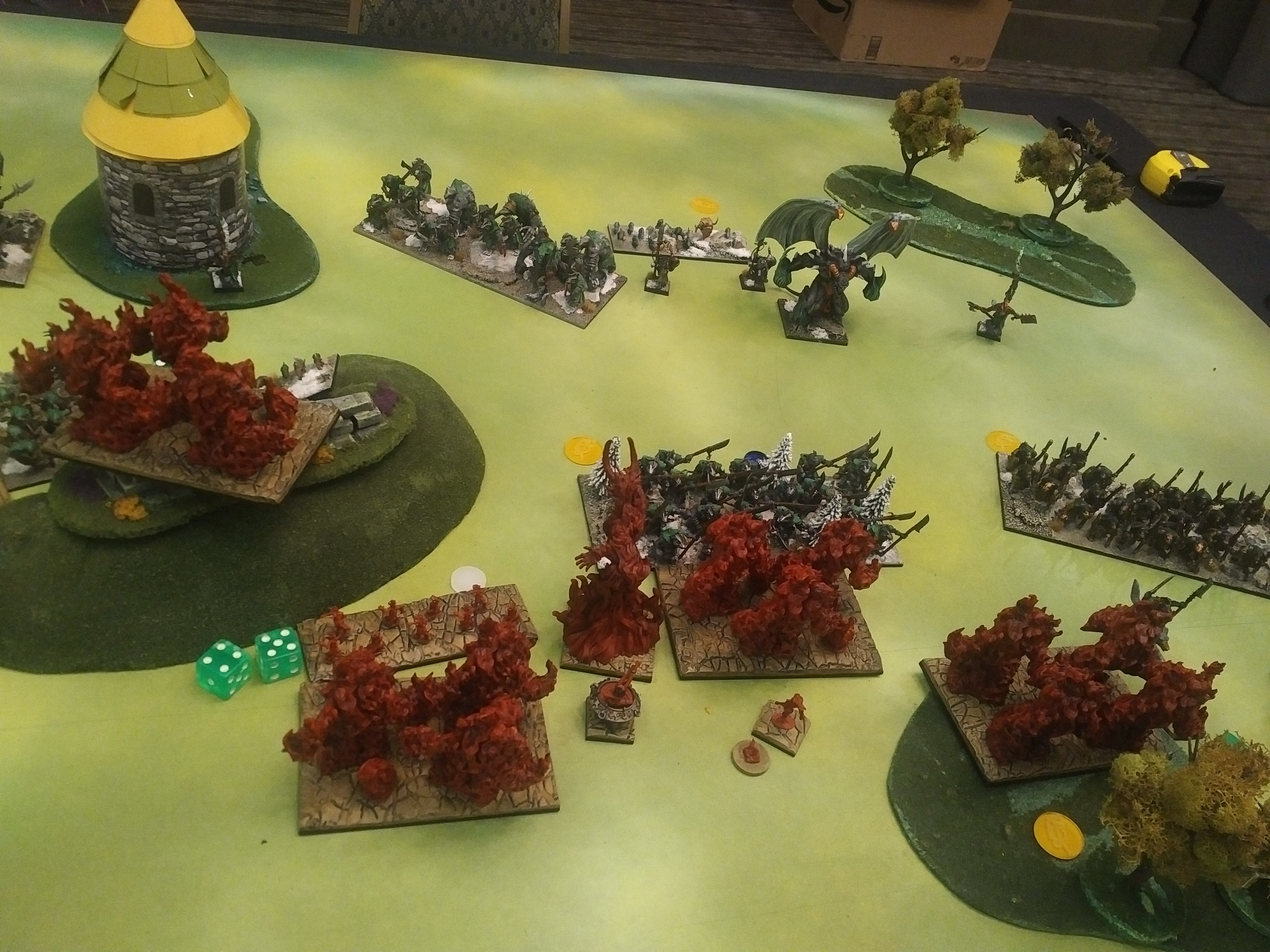 and indeed they do! Blight charge and wreck the right Sprites, as the other Enforcer charges and disorders the inspiring, surge Mage-Priest nearby. The Fire horde perched on the hill/obstacle get jammed by some Vermintide (ensuring theyll be hindered next turn), and the leftmost Sprites are flanked and removed by the surviving Warriors (who regenerate 2 wounds). The wavered Sprites blocking a Fire horde is wavered again thanks to lightning and poor rout dice, and its on to the main event: Can a bane-chanted Shock Troop horde flip over a -/18 Fire Elemental horde in a front charge? Math says its close (~11 damage + rerolled 7 rout)! 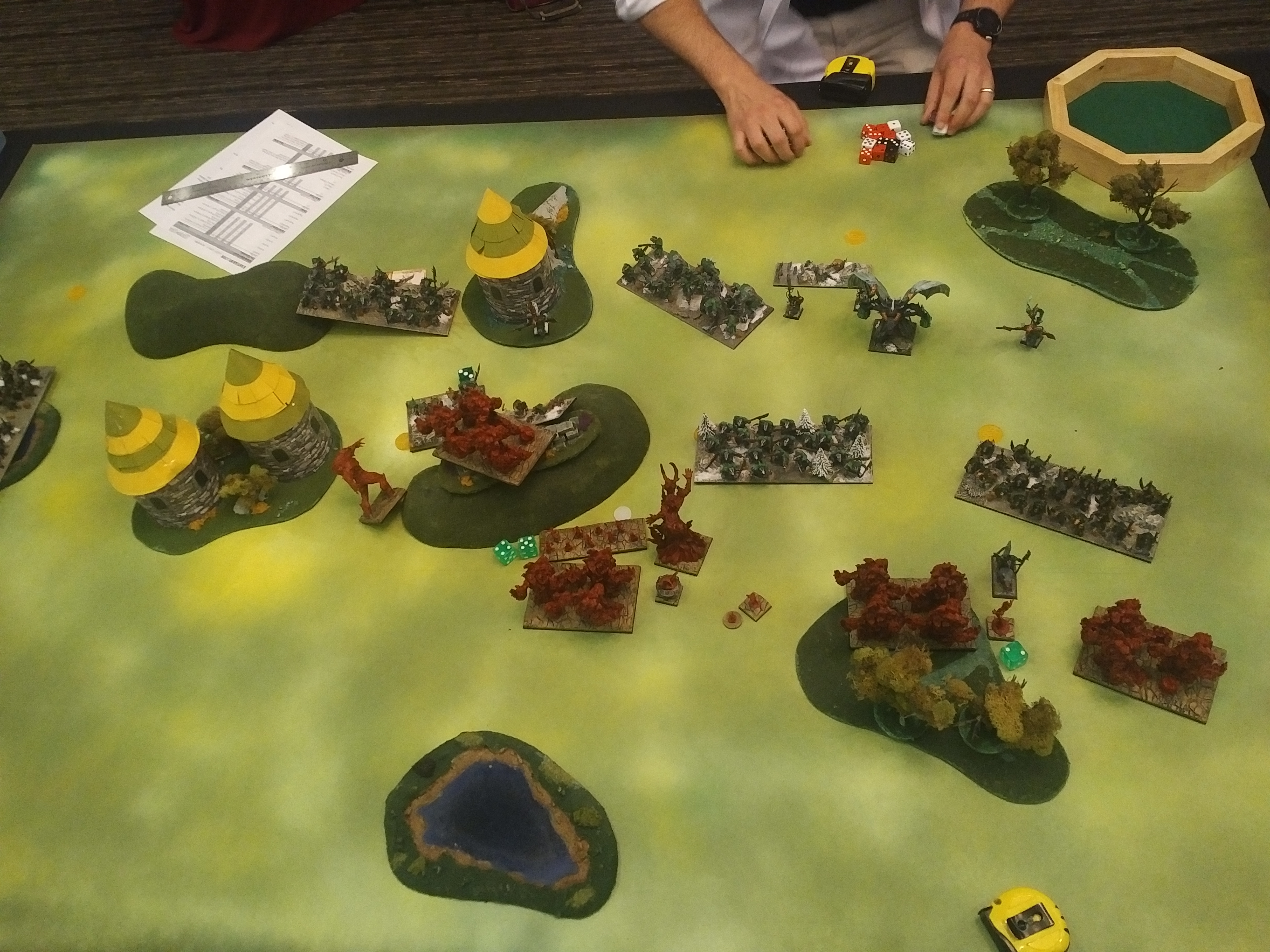 12 wounds and some solid routs later, the Fire Elementals are no more Q_Q 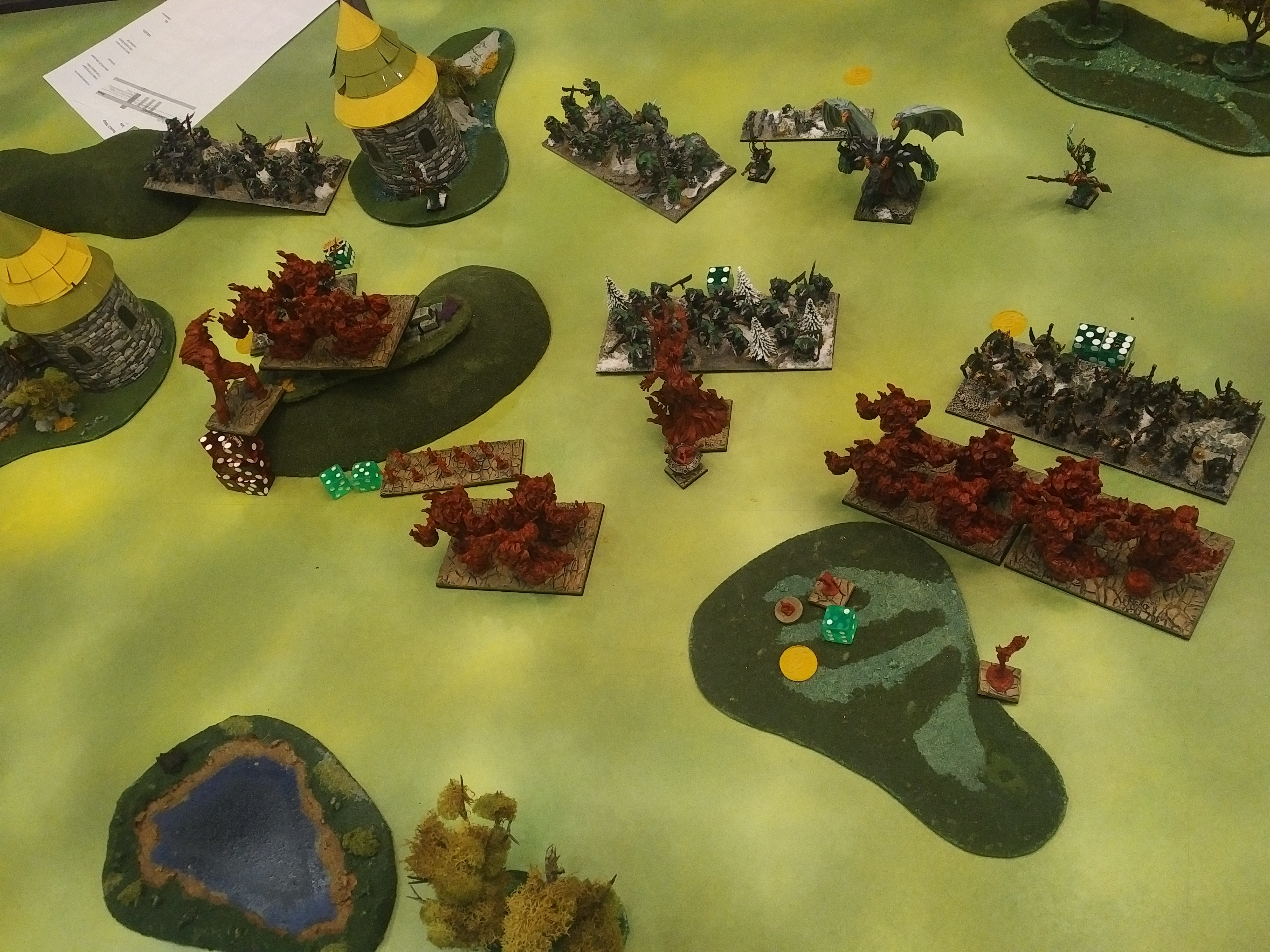 As we start this turn, I comment that despite getting rocked I have a surprising amount of Fire Elemental left, so maybe I can still fight it out? Ray gives me a quizzical look and I shrug and declare some charges: On the right, one Fire horde charges the Blight and another hits the Enforcer in the flank. After smashing the Enforcer, that horde overruns into the Blight and both Fire hordes go to work. Ensnare is a bear but they manage to put 11 wounds on the horde, which isnt enough for anything but itll do in a grind.

In the center, Agnes is forced to go it alone against the Shock Troops, as her backup Fire horde is stuck behind wavered Sprites. In retrospect it might have worked better to pound the Shock Troops with Agnes laser + 20 Mage-Priest fireballs, and let the rats do the charging. As it was, Agnes smashed 4 damage into the horde and they cared not.

On the left, the Fire horde scattered the Vermintide, despite hindering, and the CLOFD backed up a bit and roasted the Warriors again (5 damage total and wavered). 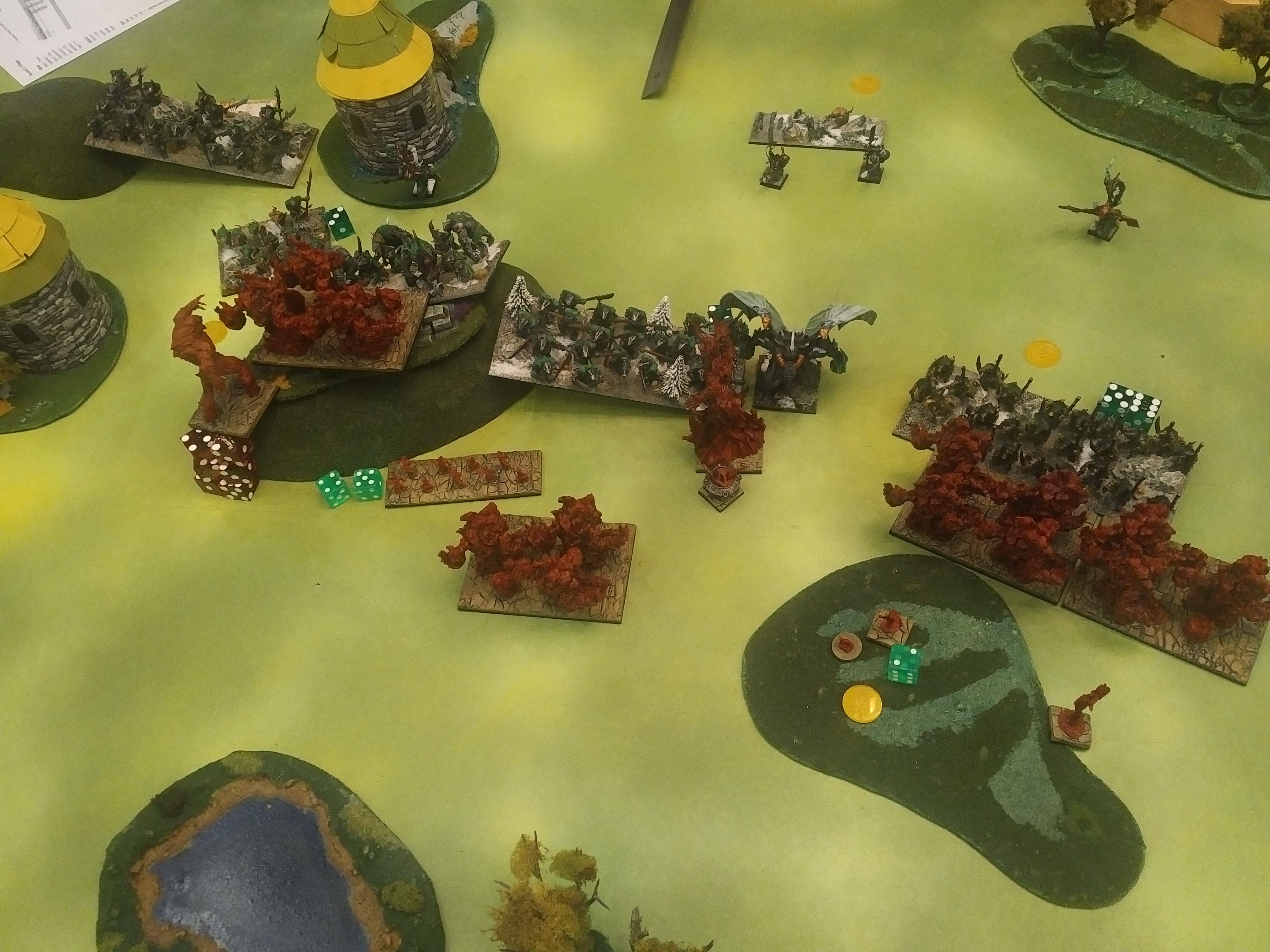 Ratkin 4 and its all out aggression now. The Fire horde on the hill take a charge from the CS 2 Shock Troops (hindered), Agnes (-/20) facetanks CS1 Shock Troops + the Demonspawn, and the Blight counter-charge the Diadem horde. Even with bane-chant on them, math says they 7.5 wounds and get melted in my next turn 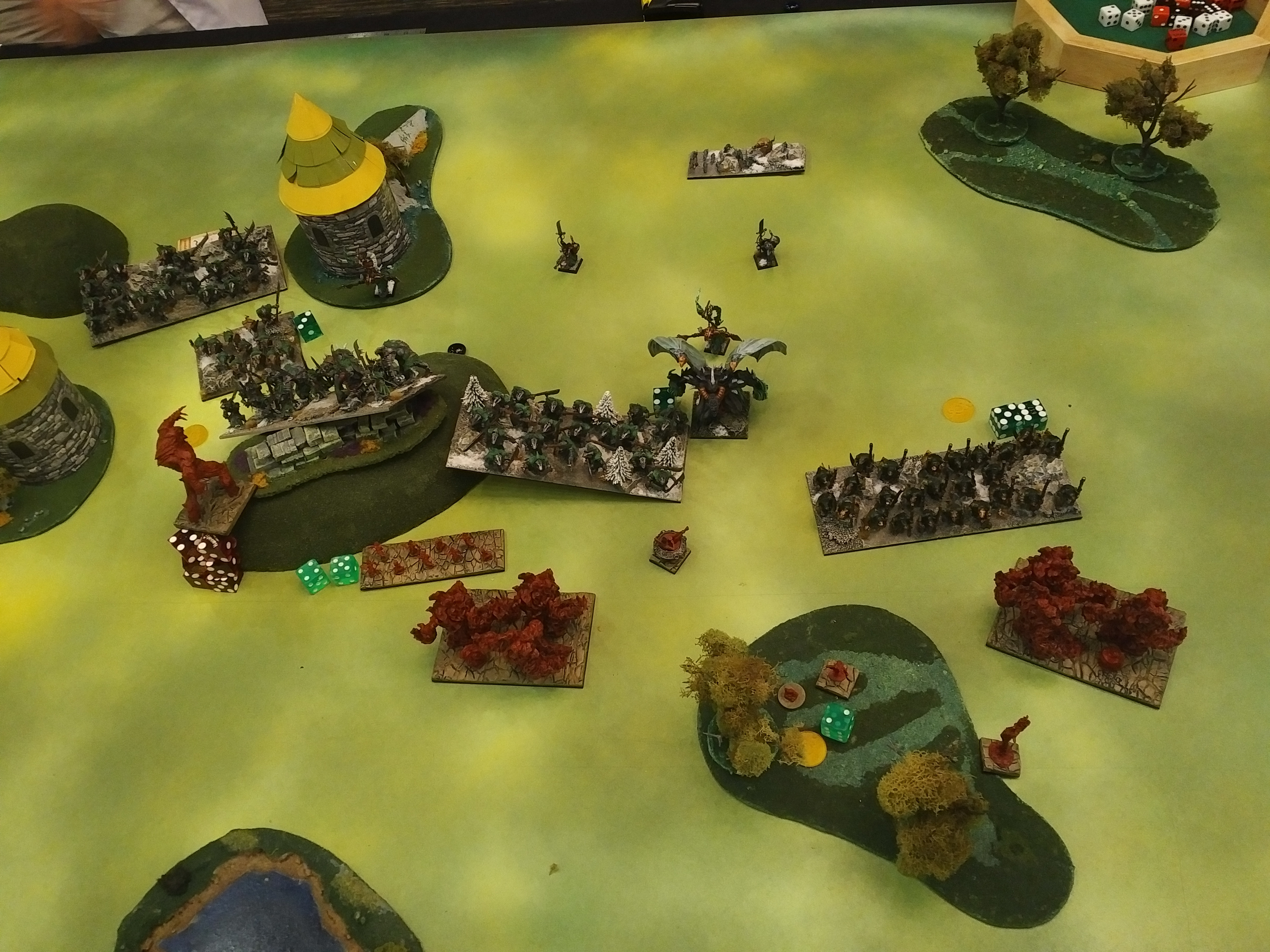 15 insane wounds later, that Fire horde is dead, as are the hill Fire Elementals as well as Agnes. All his dice were amazing this game, but the Blights were the spikiest by far, pretty much eliminating my ability to grind. 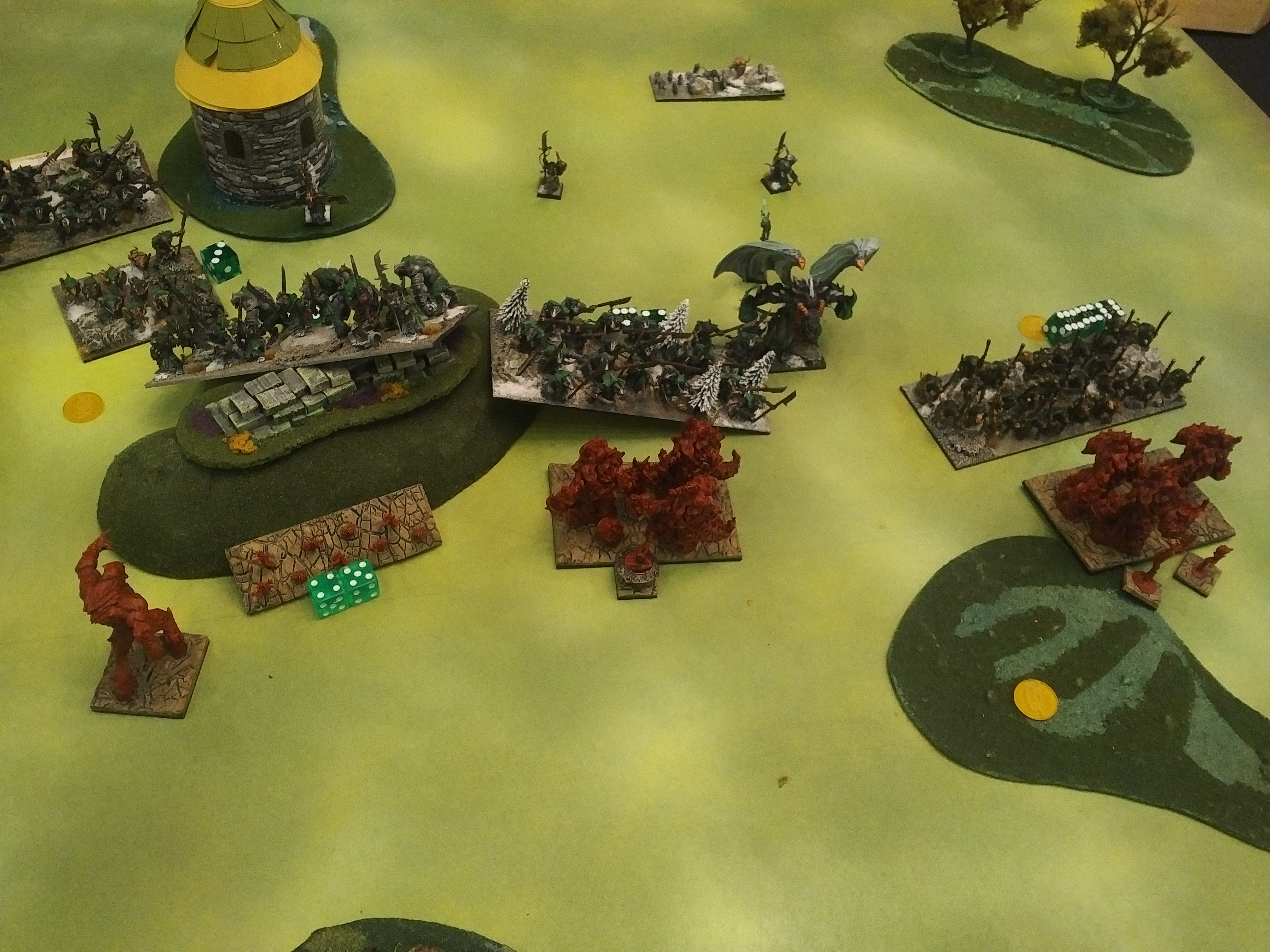 Its basically over, but theres attrition to be had. Also vengeance. The surviving Fire hordes go into Shock Troops and Blight respectively, while the CLOFD and Ember Sprites scoot around and bake 10 wounds into the CS2 Shock Troops. The Fire horde punching Shock Troops does a statistically low 6 damage while those fighting Blight do a statistically expected 5 damage. No rat cares. 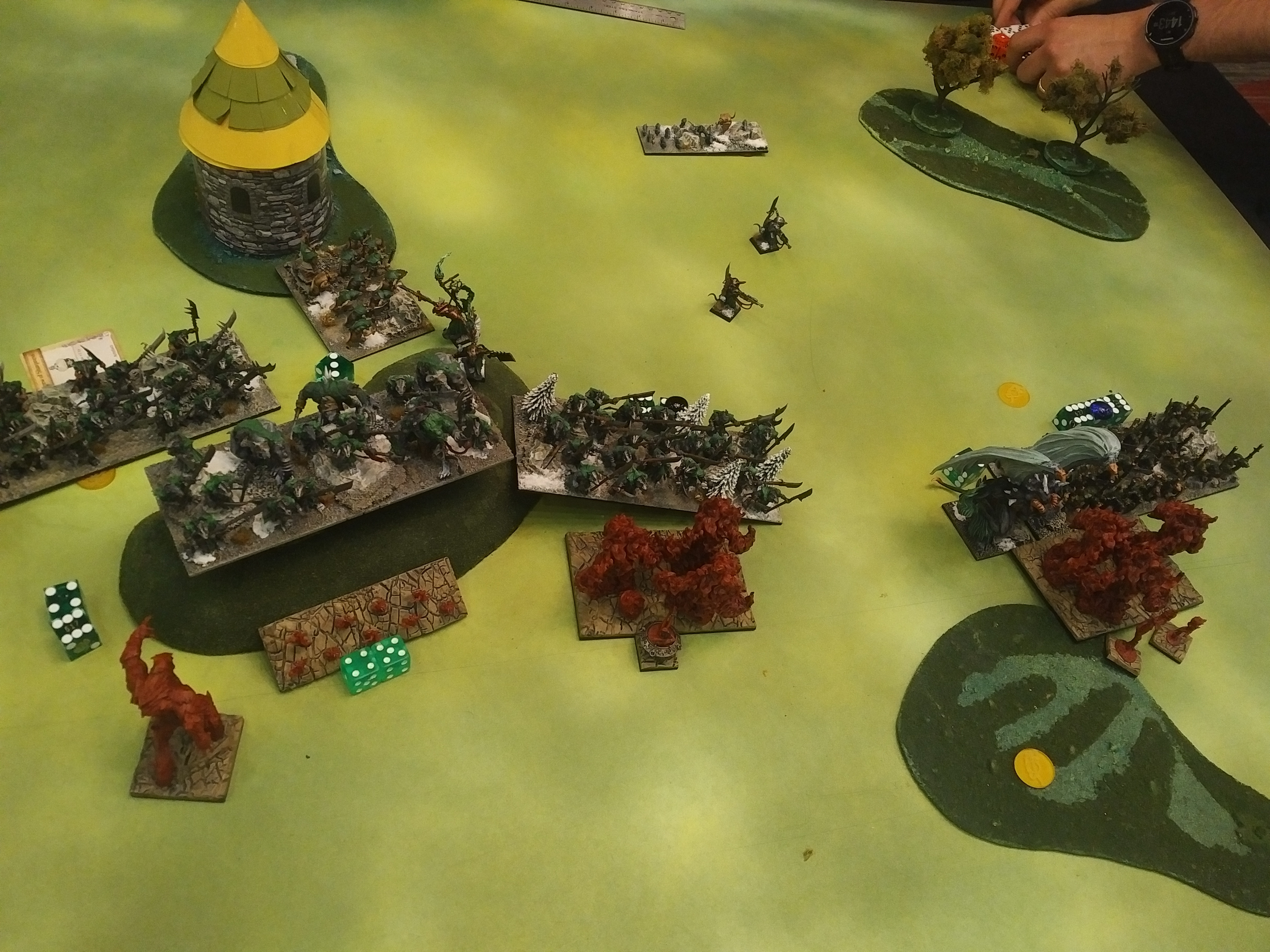 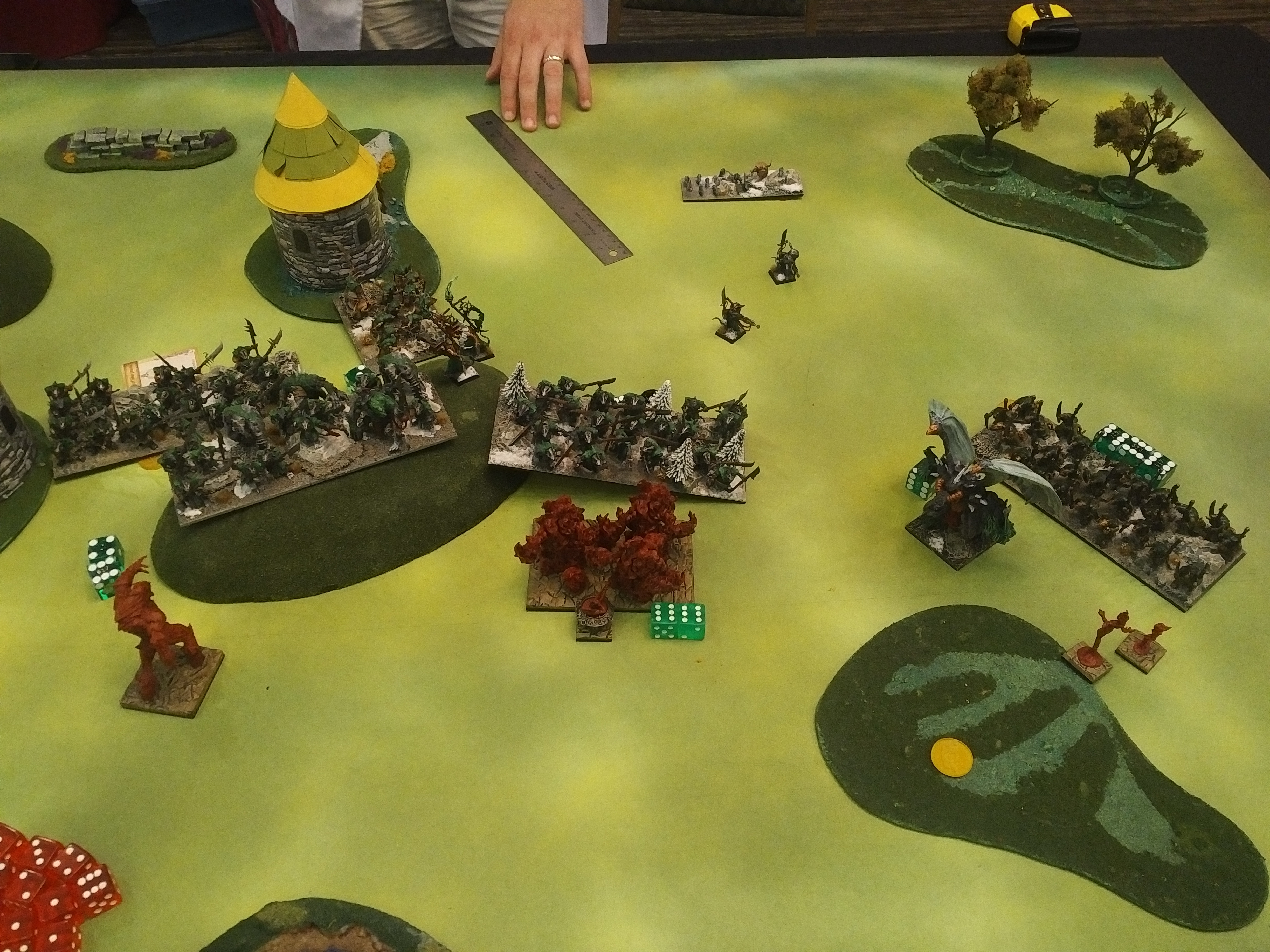 The CS2 Shock Troops devour the last of the Sprites, the central Shock Troops rip 12 wounds into their Fire horde but dont roll the 6 to rout, and the Demonspawn + (bane-chanted) Blight zero-to-rout the other Fire horde. 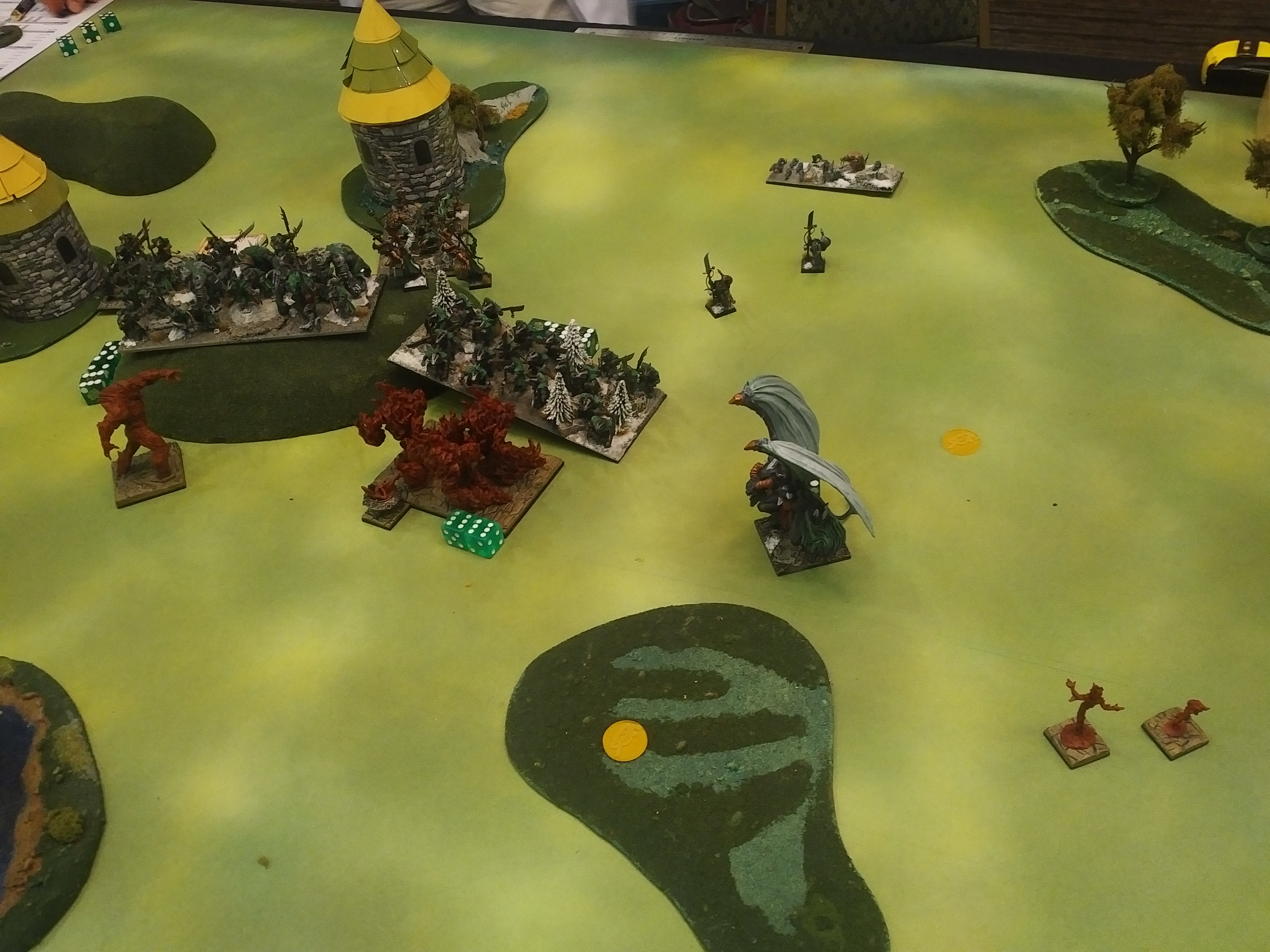 Bloodfire 5 and weve got a lot of 12 damage to slop around. One Mage-Priest fireballs the Blight off the table while the other tags 5 damage into the Demonspawn, and the CLOFD hammers 6 more damage into the CS2 Shock Troops as he prepares to meet his fate. The last of the Fire Elementals pounds another ~6 damage into the pathfinding Shock Troops but cant get lucky.

In Ratkin 6, the CS2 Shock Troops + Demonspawn zero-to-rout the CLOFD and the central Shock Troops finish off the final Fire horde. A Mage-Priest gets tickled by lightning as well. 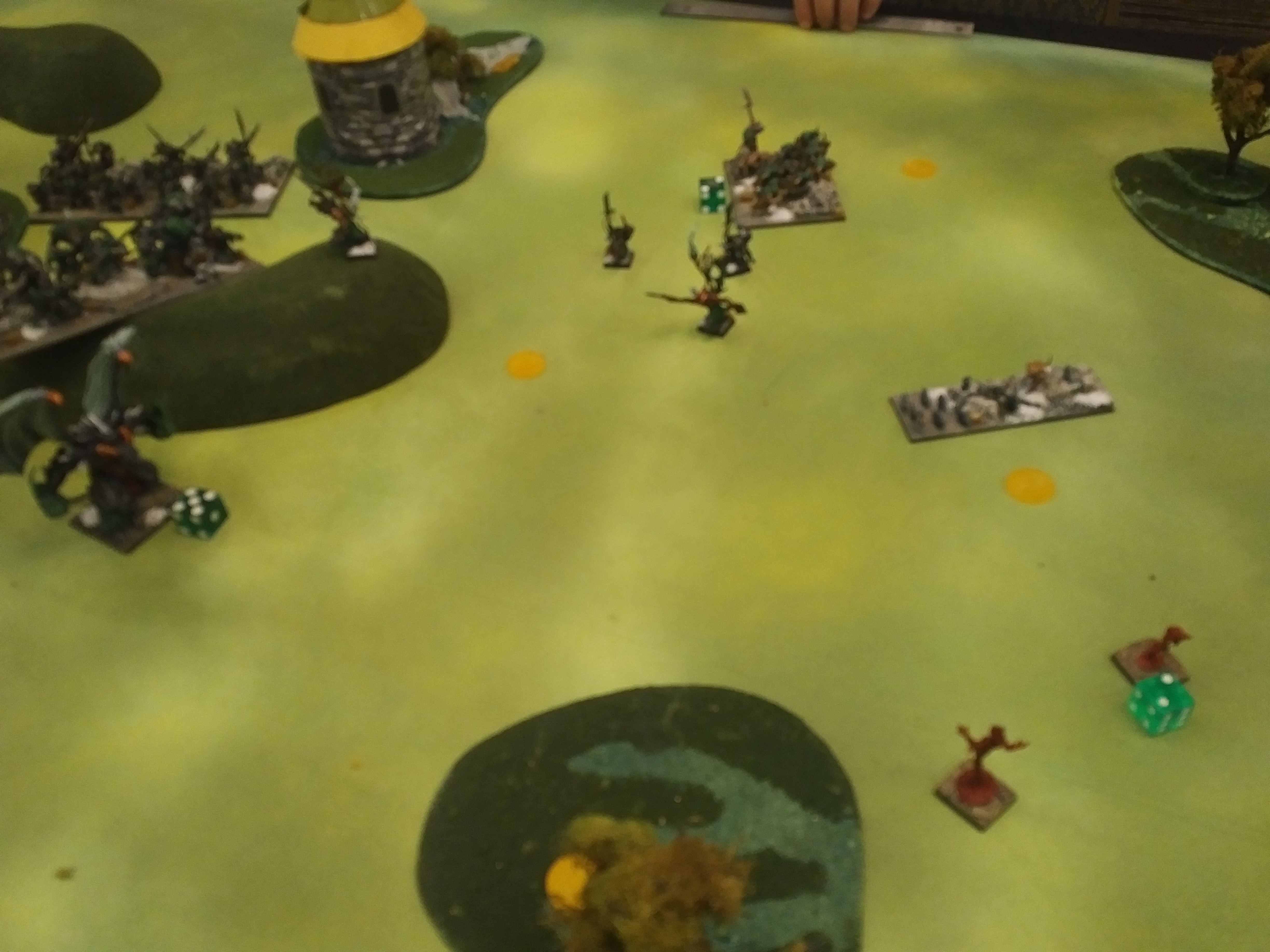 In a final FU, the inspiring Mage-Priest hammers the pathfinder Shock Troops with fireballs, sending them packing, while her understudy Martyrs Prayers her clean because reasons. The Herald scooches her pot out of LOS of things in case Turn 7 happens. Blessedly it does not.

This was a game I was never going to win, especially once we rolled maximum counters, and especially with how his dice were. I needed some things to work out for me to grind things out, but I never caught a break. Ah well.