After many months of being very busy with life and faffing around with AOS 2.0 (less irritating now, but still not great), I painted a few more fire elementals and threwdown at the Keystone GT last weekend out near Hershey, PA. The army got a lot of praise from other players, which was definitely appreciated, and felt great to play again. I don’t know if I’m running them at the Crossroads GT in September, as it’s a team tourney and Bloodfire is an intentionally underpowered list, but after being the only Salamanders player at a ~34 player GT I don’t know that I want to be the 5+ Ratkin player at a 48 player one. Though that’s a tale to come.

In the meantime, stay tuned for five batreps from Keystone! I’ll aim to have them done through the rest of the week, starting tomorrow since I need to upload a lot of pics 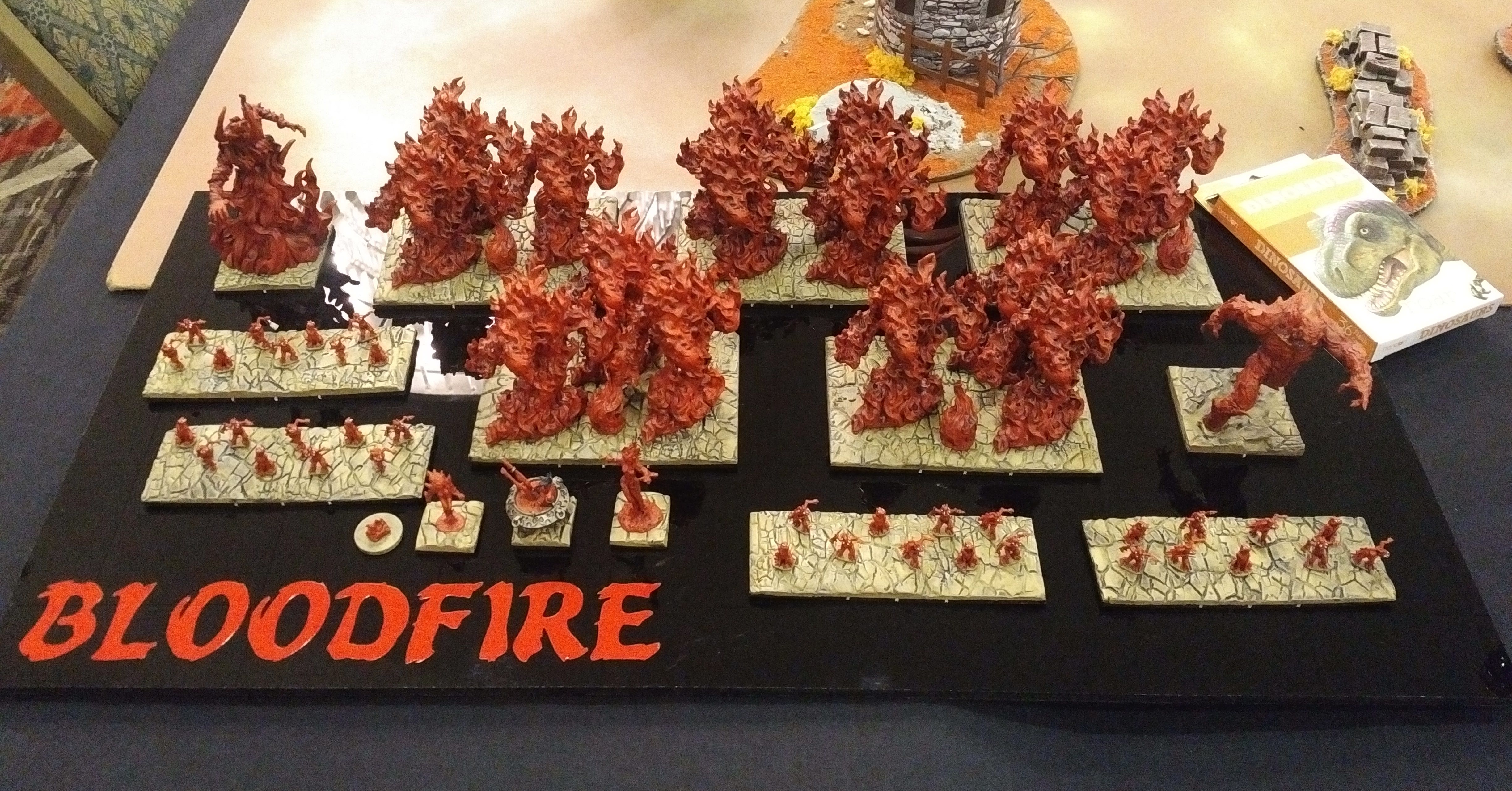 In the end I went with the fifth Fire Elemental horde because it was about half painted already, as opposed to the Jar-raider horde which wasn’t even built yet. While I don’t regret the diadem, especially as it further reinforces the theme of the army, I’m still debating downgrading it to brew of courage and slapping bane chant on the surge priest. But here I am still getting ahead of myself! I’ll be back soon with game one.

First round of Keystone saw me back in the saddle and playing Joe, a super nice dude for whom this was his first GT! So time to teach a tournament newbie how the warm, liquid goo phase that is Bloodfire works 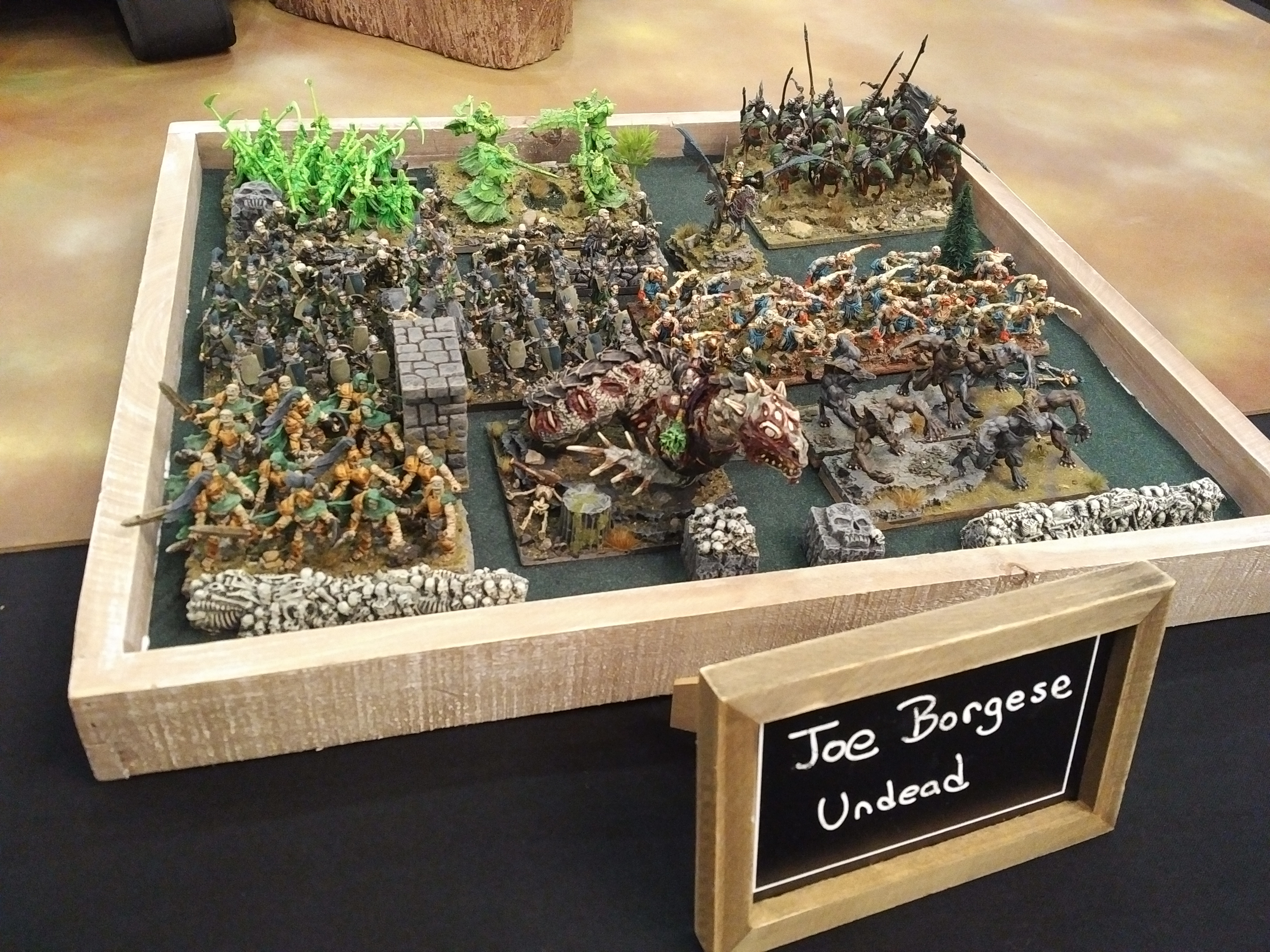 A nice varied Undead force, lots of different tools for different jobs. Bit light on inspiring and I would have scrapped all the items to give the Soul Reavers pathfinder (or the Necro inspiring), but should make for a nice scrap.

First round was Invade, ensuring a grind between our two close-up armies, which Im all about. Bloodfire won the initiative, which is very helpful when most of your US shambled 6! 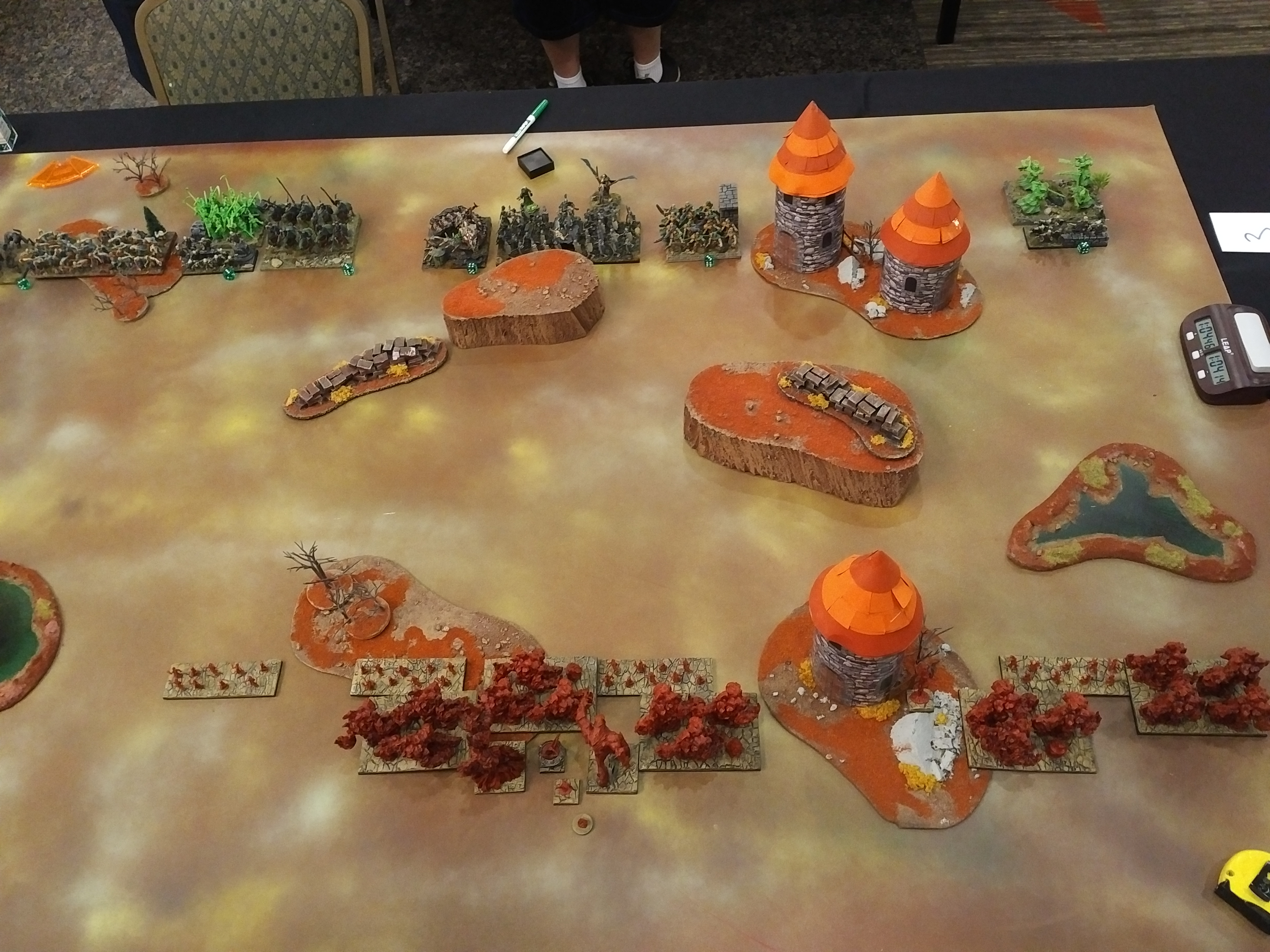 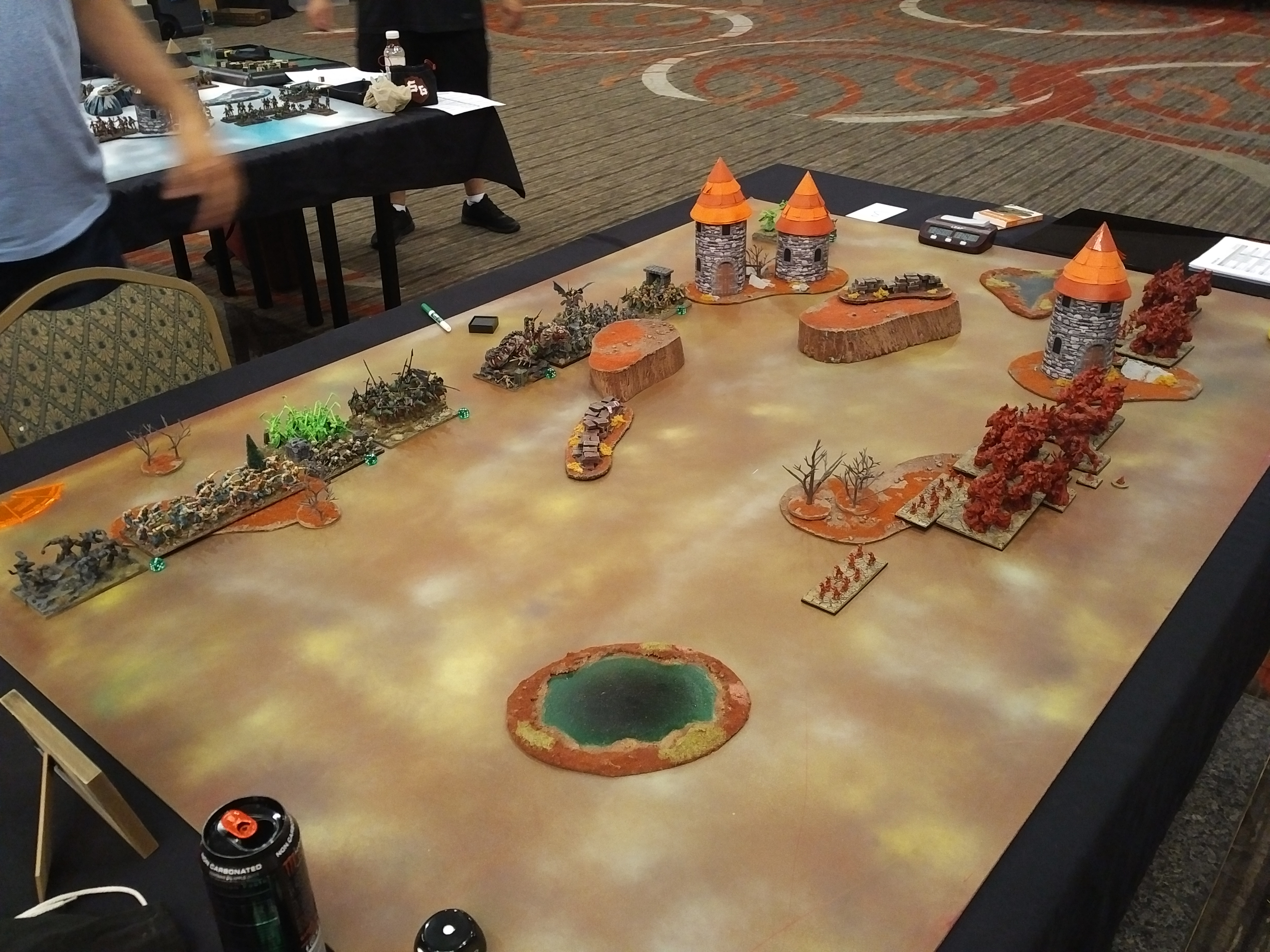 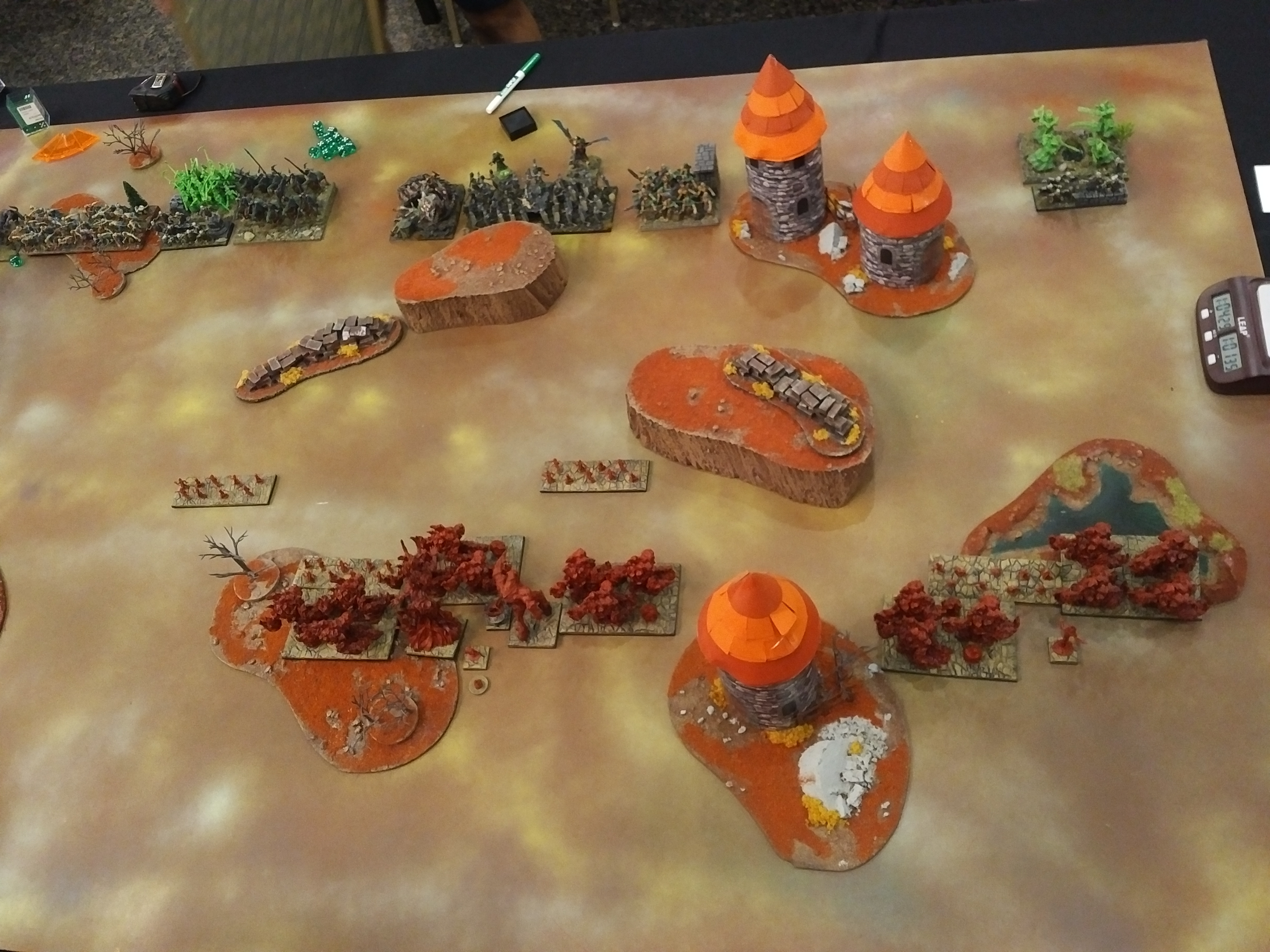 Bloodfire rolls out, maintaining standard refused flank formation. Im fully aware his fast, elite units are headed around the left flank – my goal is to wheel around the central fulcrum while maintaining enough power in my right flank to deal with his troops over there (Ghouls + Wights + Peg). This is pretty standard stuff for Bloodfire at this point. 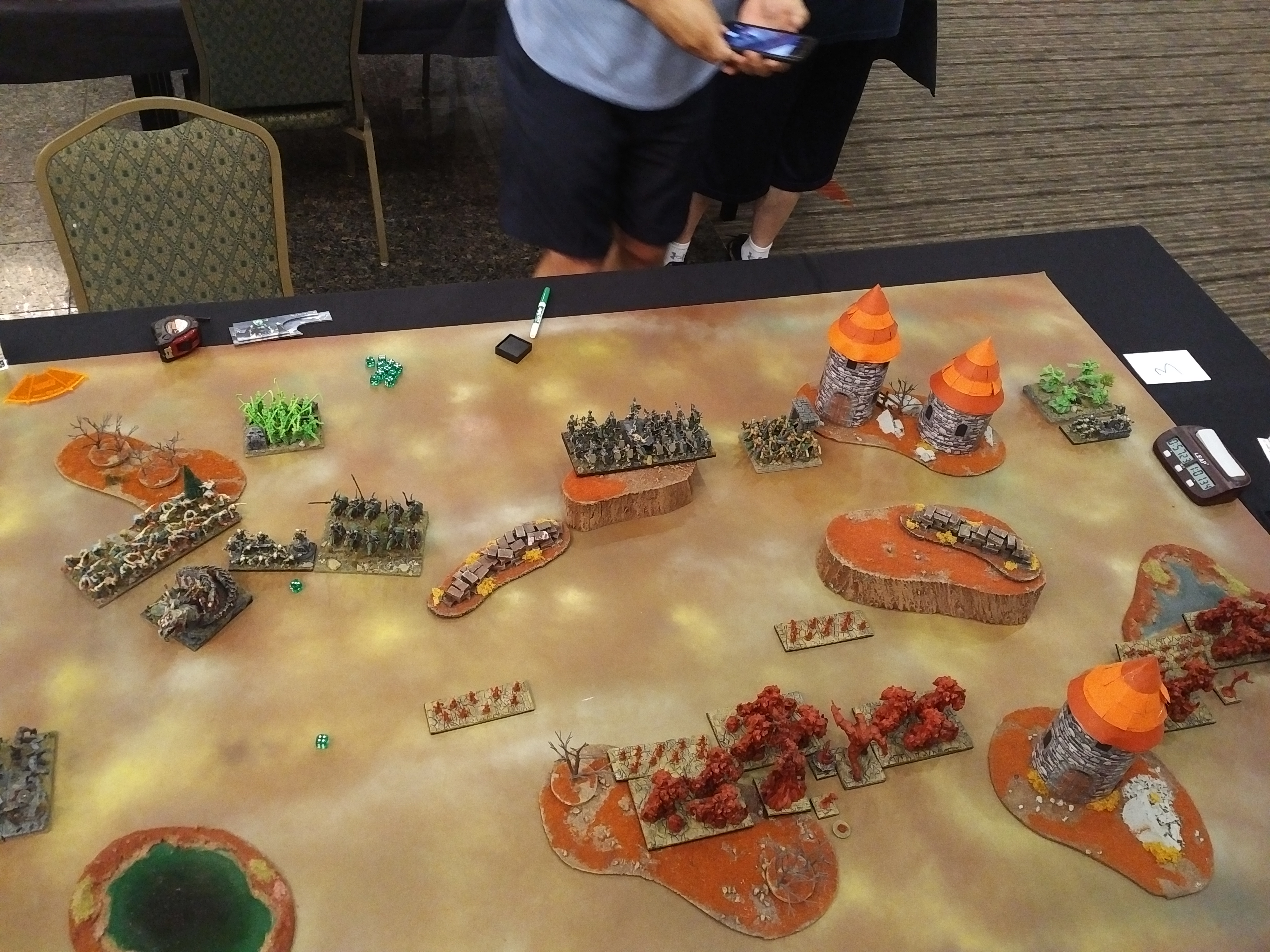 Undead shuffle forward on the right and begin to head in on the left, while the Werewolves blitz deep down the left flank. The King on Wyrm has some trouble with facing and decides to punch it towards the left at the double rather than getting closer to the red tide. 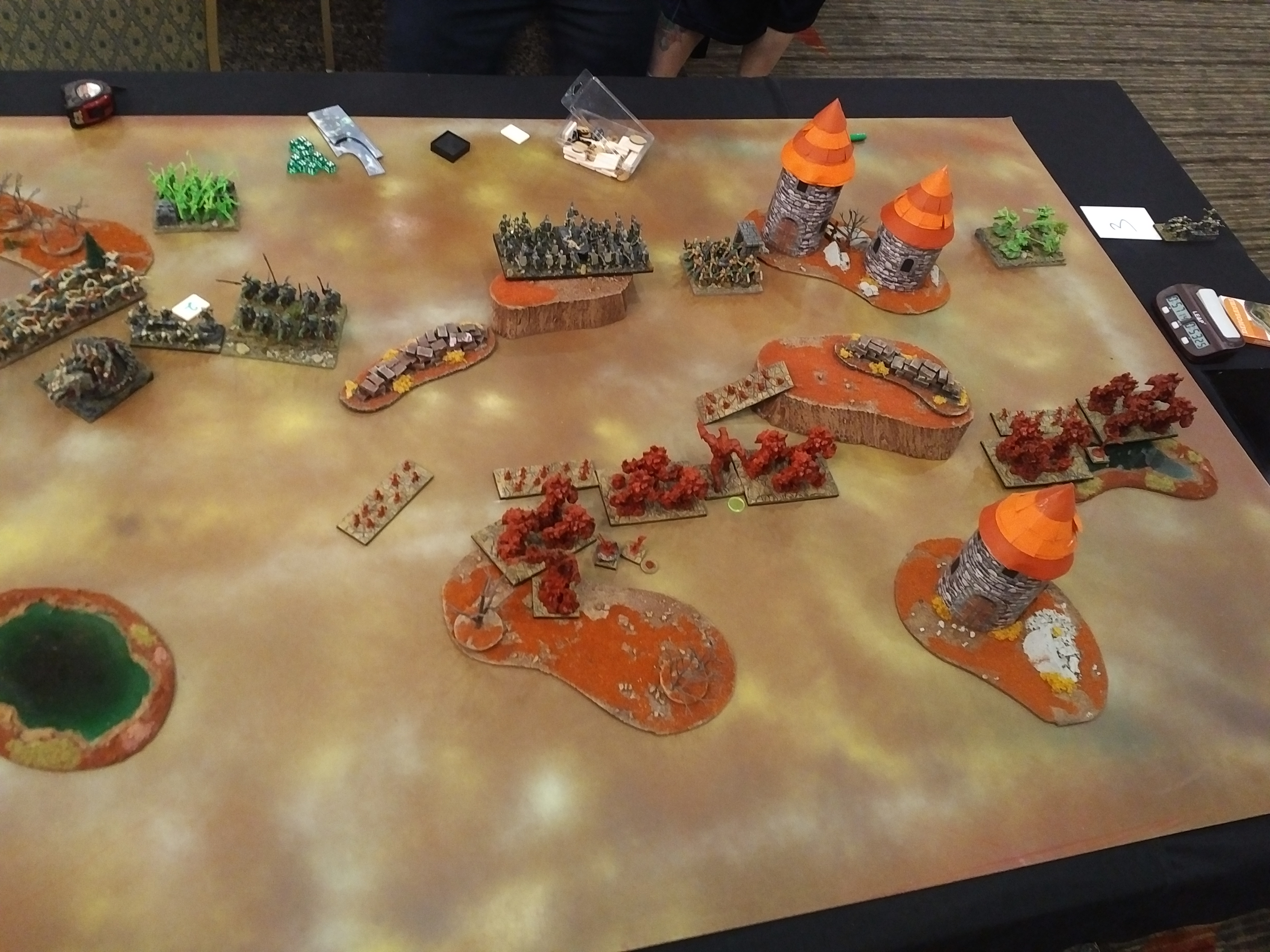 Turn 2 means Operation: Chaff Cull + Chip Damage goes into effect. The line continues to bow out, maintaining a footing in terrain where able, getting Ember Sprites and the Clan Lord into range. Double bane-chant succeeds on the CLOFD and its time to cook: right Ghouls die, Revenants take 5 damage, and left Ghouls take 2 as well. 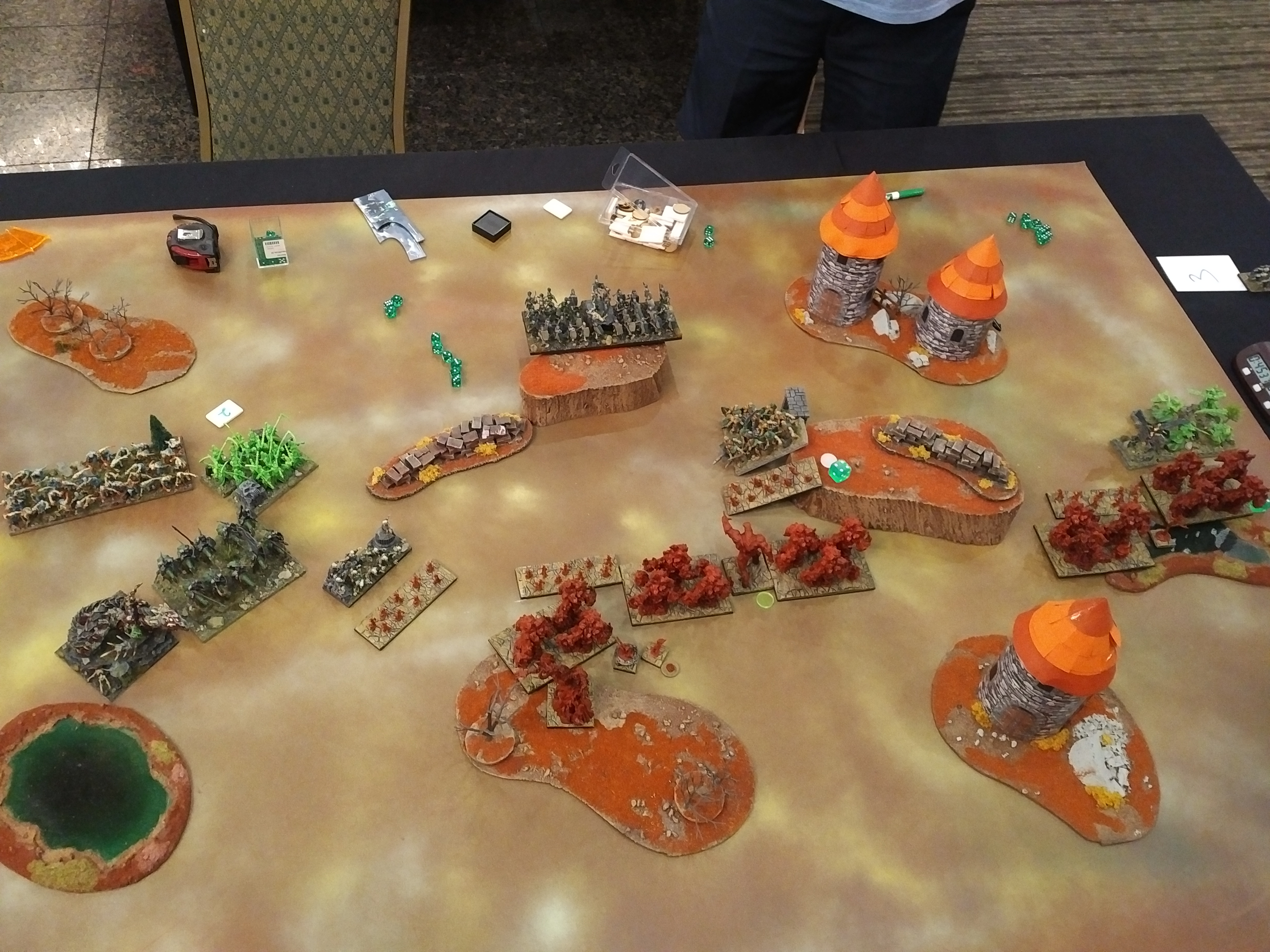 Not keen to weather the building firestorm, the Undead start to get stuck in, with decidedly underwhelming results. The left Ghouls tackle the Sprites what shot them and fail to land a wound (!), the Mummies smack some central Sprites around and waver them, and the Vampire + Wights get bogged down in the edge of the right pond and largely bounce off the diadem Fire Elementals. Meanwhile the left flank gets oriented to devastate in coming terms – the Werewolves perform an L-shaped maneuver deeper into the southwest to make room for the Wyrm. 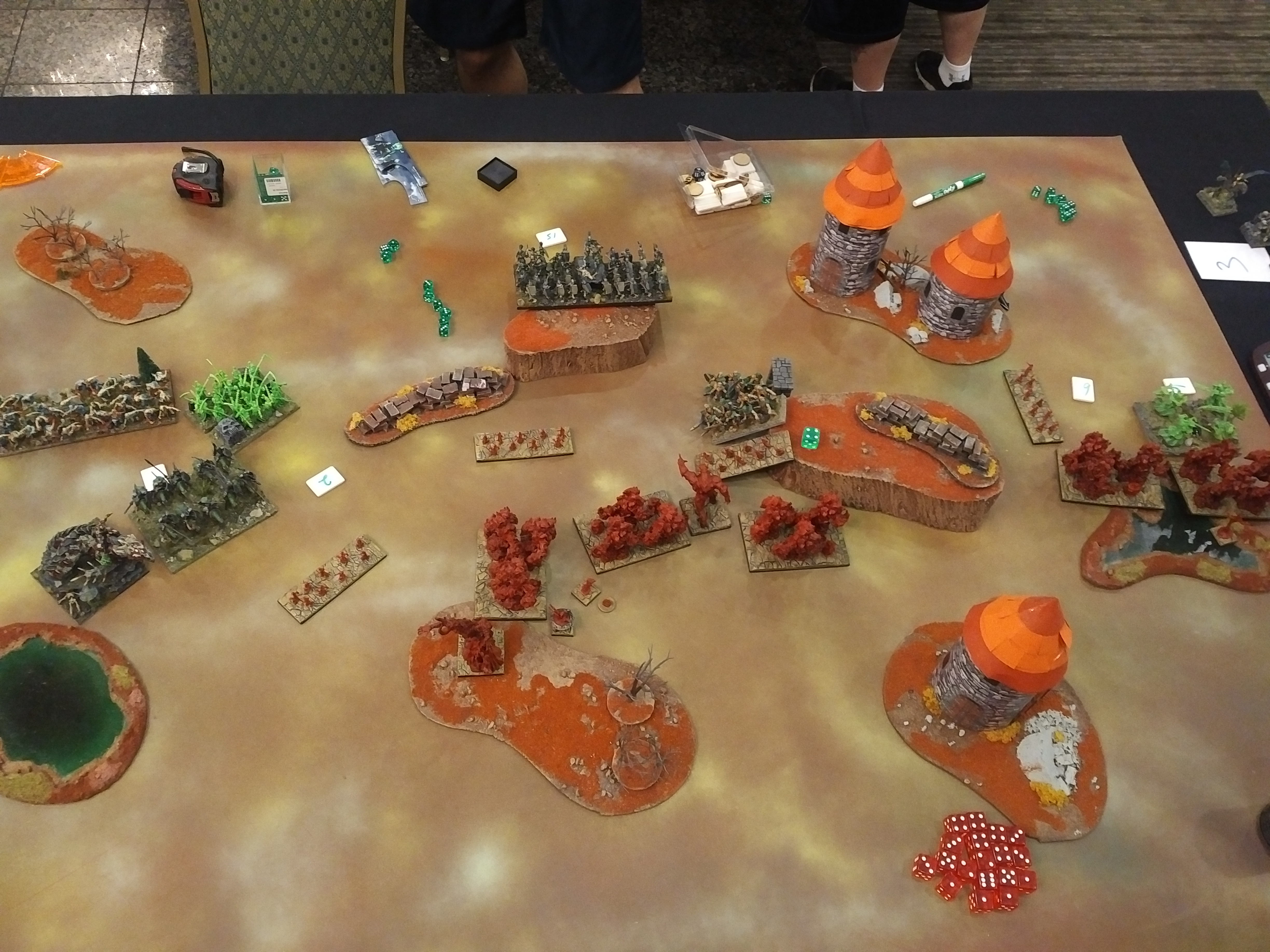 The Bloodfire battleline continues to rotate, with Agnes and a Fire horde turning to phase the incoming Undead beaters, as a second Fire horde waits to provide backup to either the left or center. Agnes also tags the Soul Reaver Cav with her heatway, melting 3 wounds into them. The Ghouls Sprites walk sideways to get in the way of chargers, then puke on the Ghouls and remove them. Centrally the Clan Lord and more Sprites continue breathing on the Revenants, burning them up to 15 damage, while the wavered Sprites keep the Mummies – and looming Fire horde – gummed up. On the right, Sprites get out of the way so the fresh Fire horde can flank, and obliterate, the Vampire on Pegasus, as the Diadem horde punches the Wights in the face. 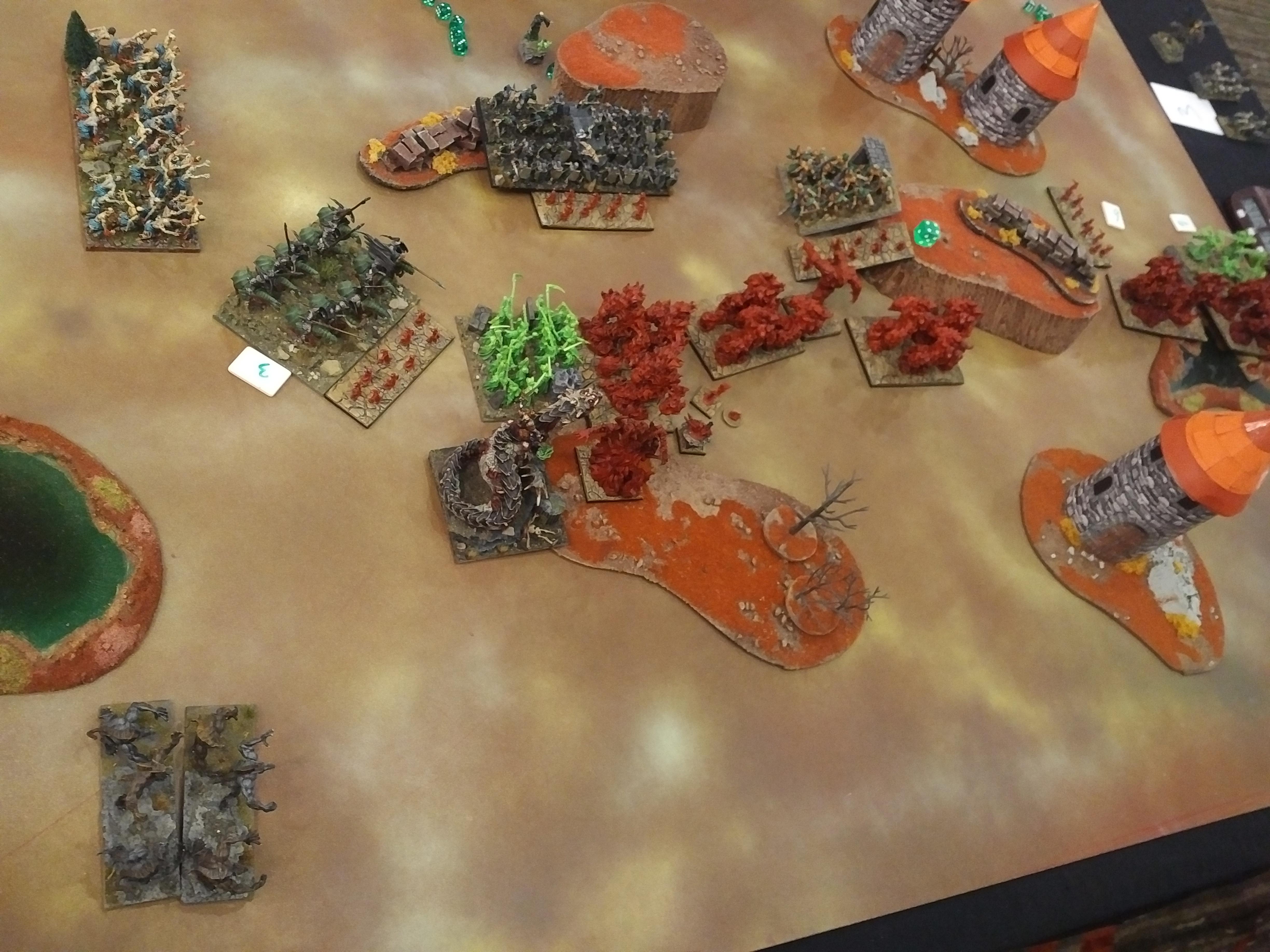 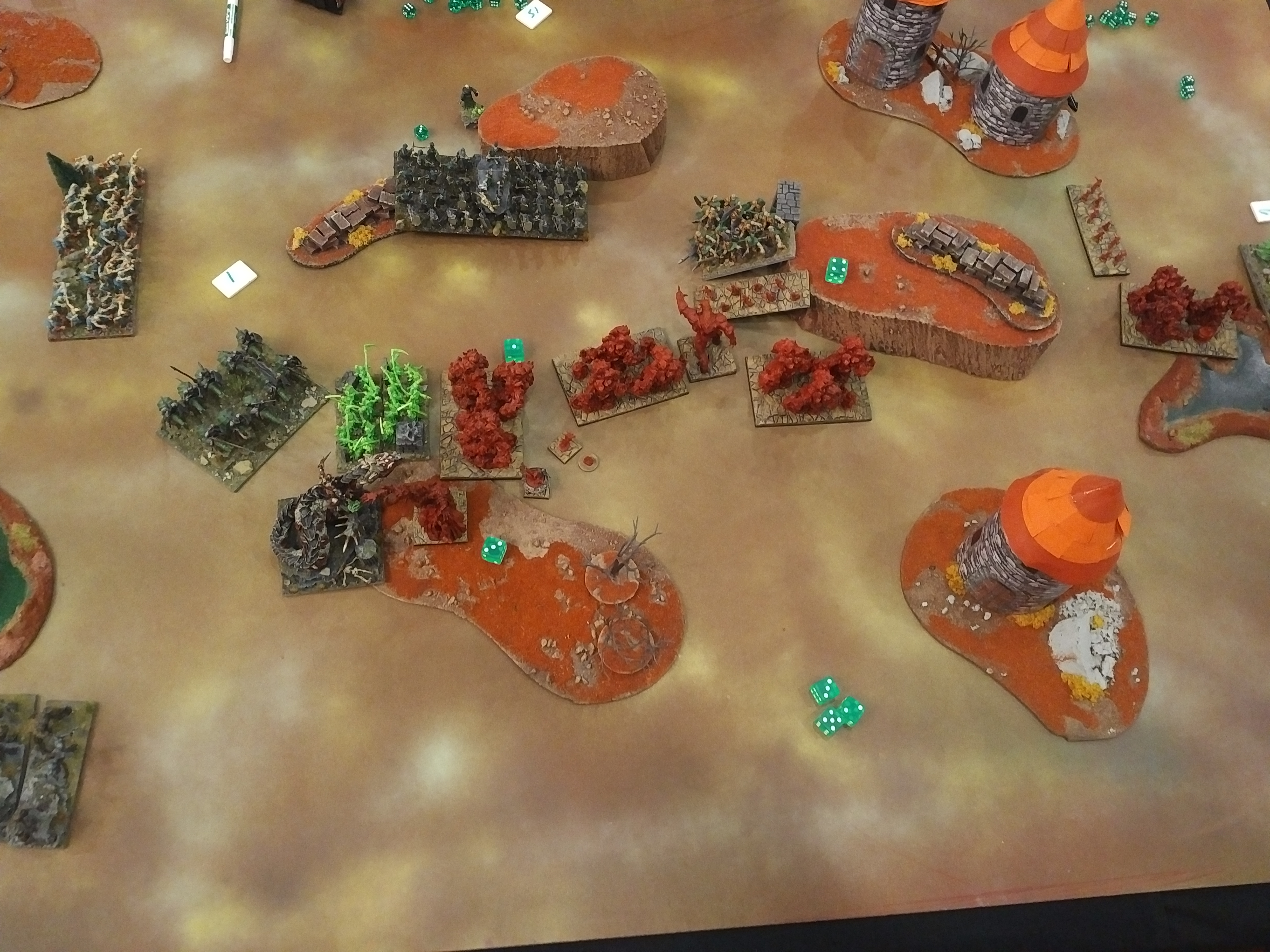 Although the hindered Undead flyers have little luck against their targets – 3 damage to Agnes, 1 to the Fire horde – and the Mummies manage no wounds against their Sprites (?!), other combats are more decisive. The Soul Reavers devour their Sprites (lifeleeching 2), the Revenants feast on theirs as well (lifeleeching 2), and the Wights finish what they started and wreck the Diadem horde, turning to face their bros. 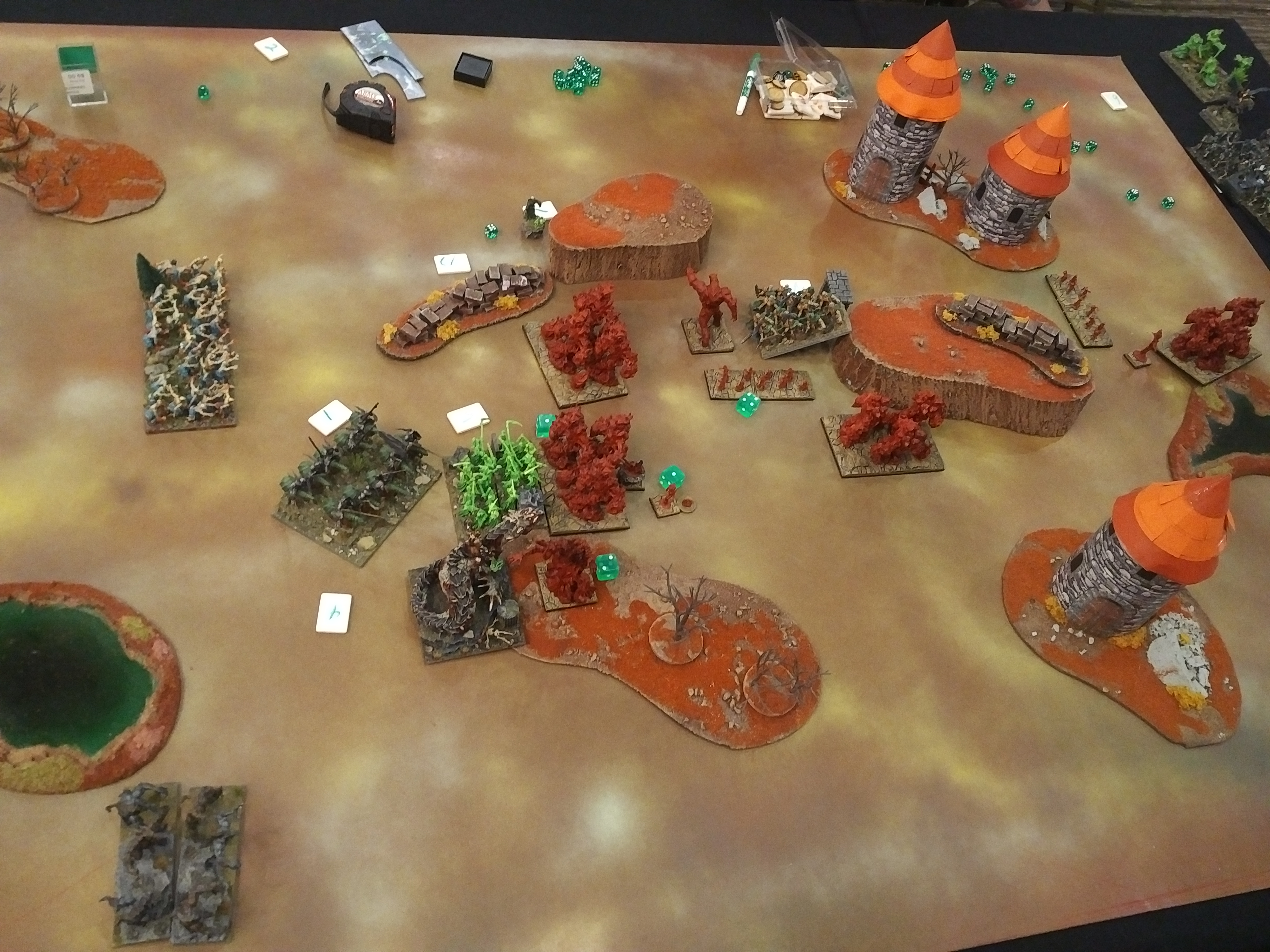 With the grind underway, Bloodfire returns the favor. The right Fire horde charges the Wights, shattering them for great justice. Unable to charge the Mummies thanks to the last of the Sprites, a central Fire horde stands 1 away and waits for their opening (in retrospect I think I could have surged them in, the surge Mage-Priest is on the tall one on the right with nothing to do). The other central Fire horde slams into the battered Revenants (13 damage), finishing them off, as the Clan Lord tries to shoot off the Necromancer (since Soul Reavers in cover were less appetizing!). In the forest grind, the Mage-Priest pulls 1 damage off Agnes with Martyrs Prayer (7 :P), and both Agnes and the Fire horde counter-charge their partners. Damage happens. 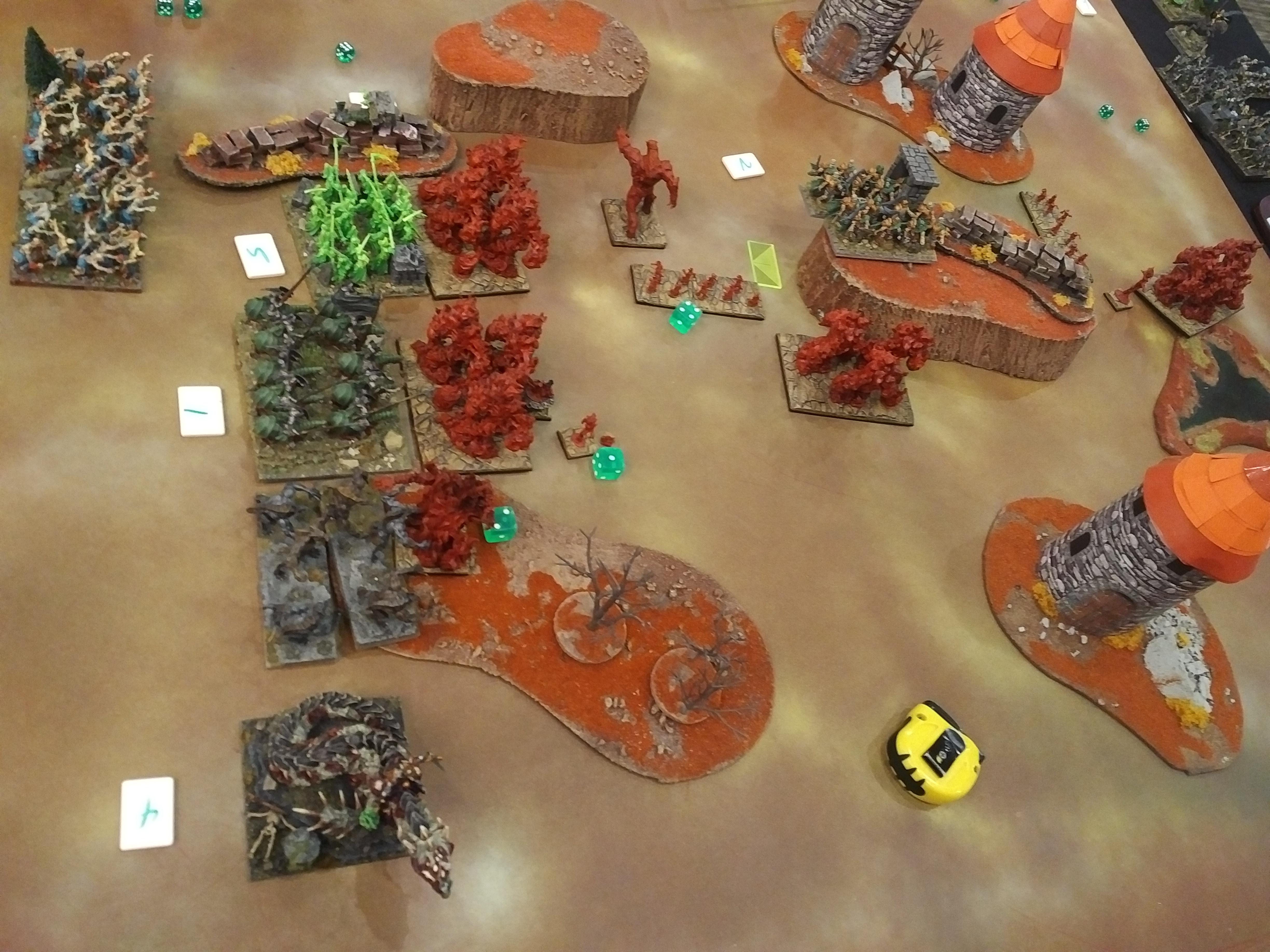 Undead 4 begins with a discussion about what the Wraiths could do to make room for the Soul Reavers, and ultimately they slide sideways 5 and surge forward into a Fire horde, letting the Soul Reavers charge in (hindered). Similarly the King on Wyrm GTFOd south, tagging the Werewolves into Agnes (also hindered). Finally, the Mummies make contact with their own waiting Fire Elementals. 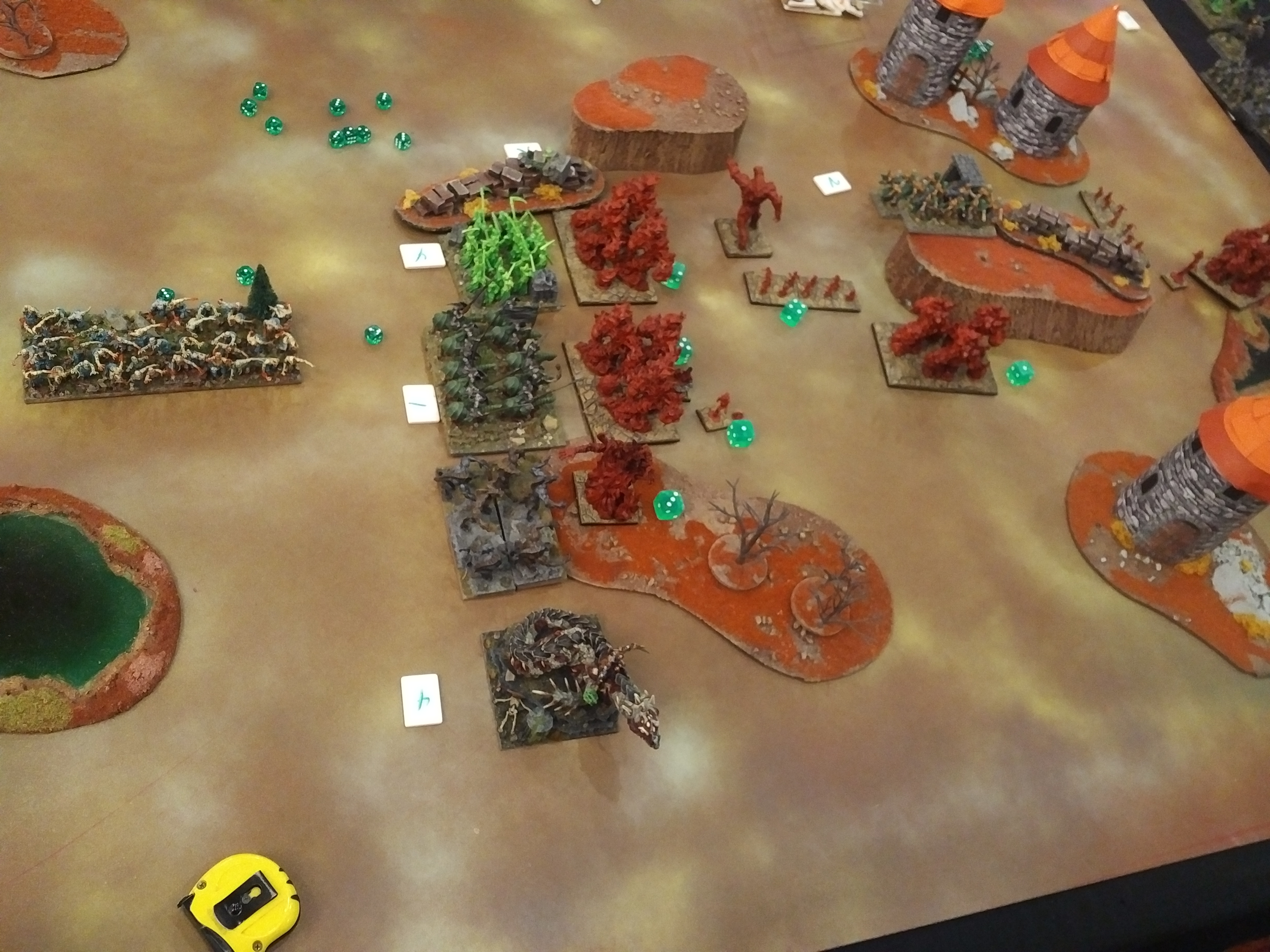 Damage is light across most combats, with the exception of the Soul Reavers who get their Fire horde up to 10 (vs -/18 nerve), and the Undead bounce. Oh, the Zombies meanwhile realized they should be a little more convincingly in the enemy side and scoot down. 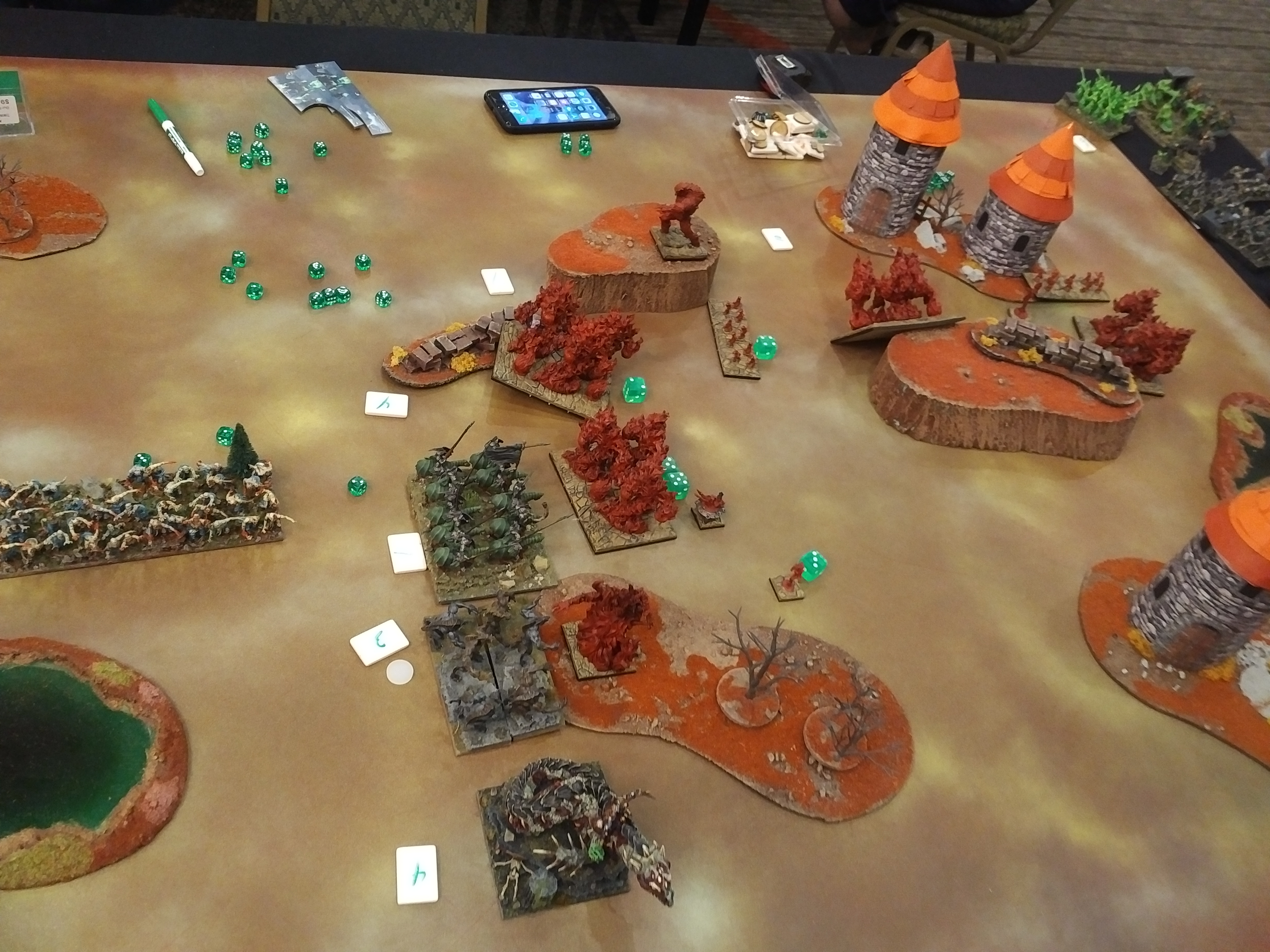 Bloodfire 5 delivers a sharp blow to the Undead, as both the Mummies and Wraiths are exorcised on the counter-charge and the Necromancer is immolated by the Clan Lord + Ember Sprites. Agnes, fully healed by the little Priests prayer, smashes 6 damage into the Werewolves and lands a lucky waver, but the damaged Fire horde fighting the Soul Reavers struggle and land just a couple damage, stripping the vampires TC at best. 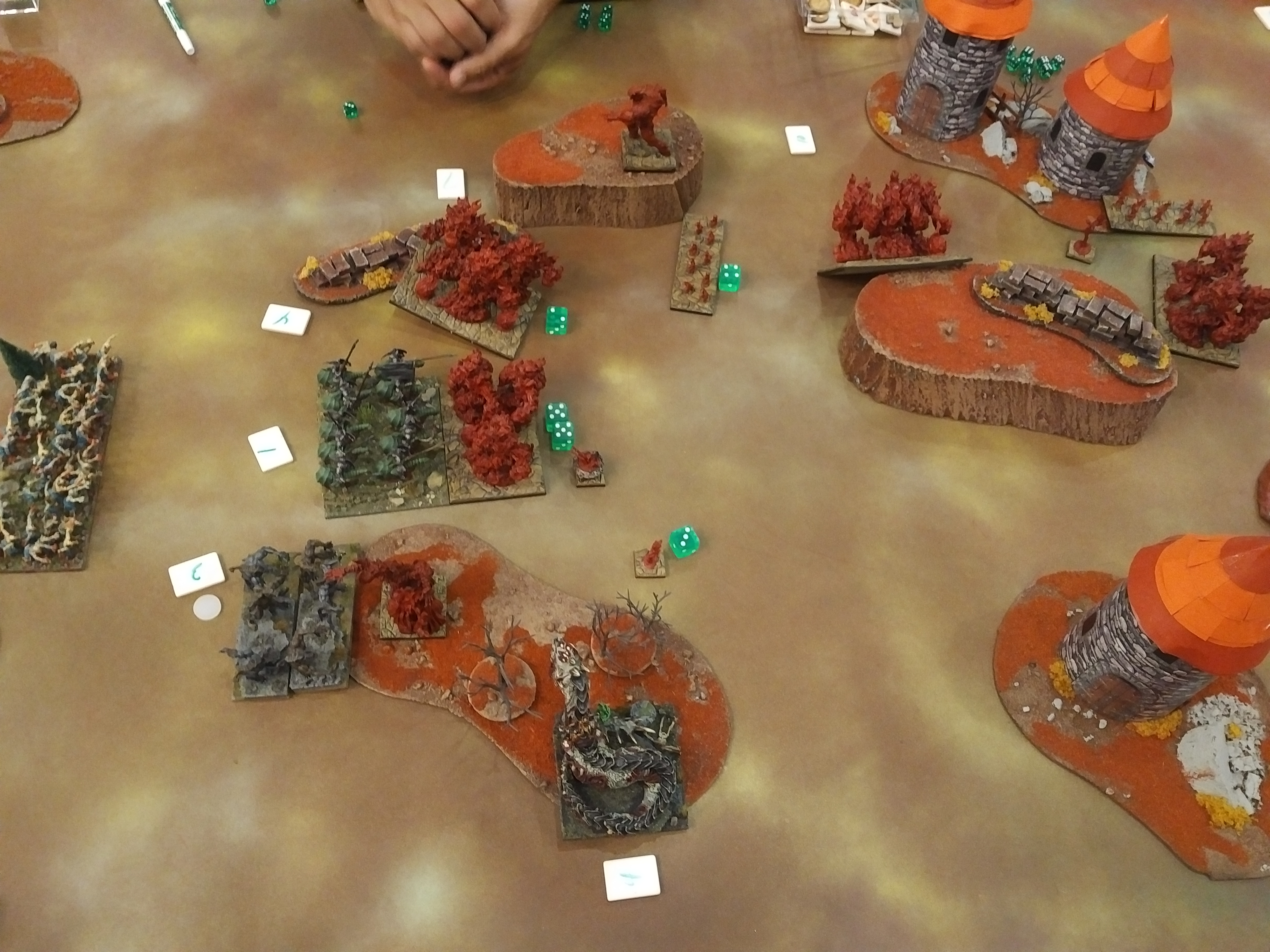 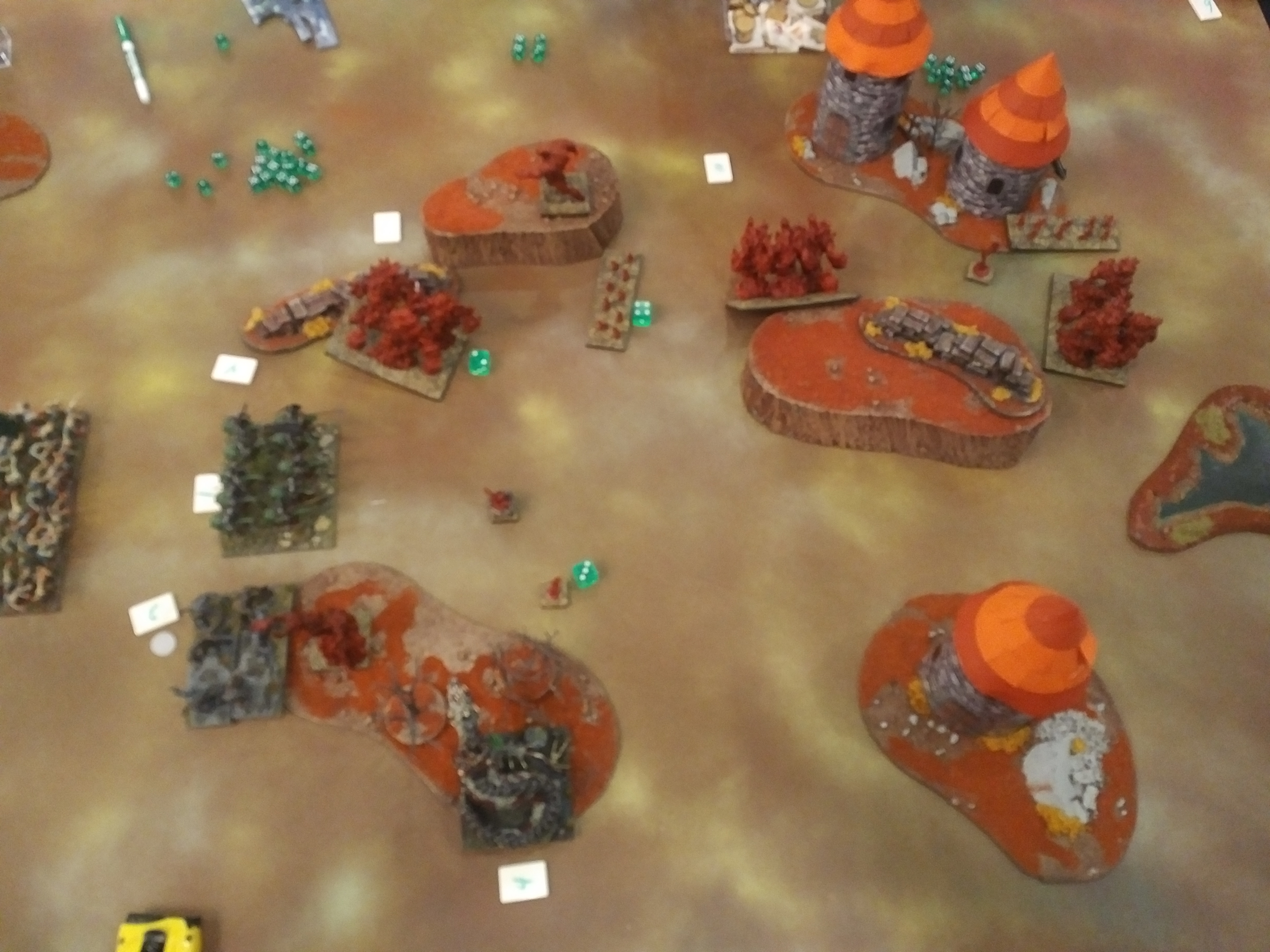 Undead 5 sees the Revenant King reorient his Wyrm to take on whatever he wants next turn, the Werewolves shake their waver and regenerate half of their damage, and the Soul Reaver Cav explode their Fire horde and back up 1. 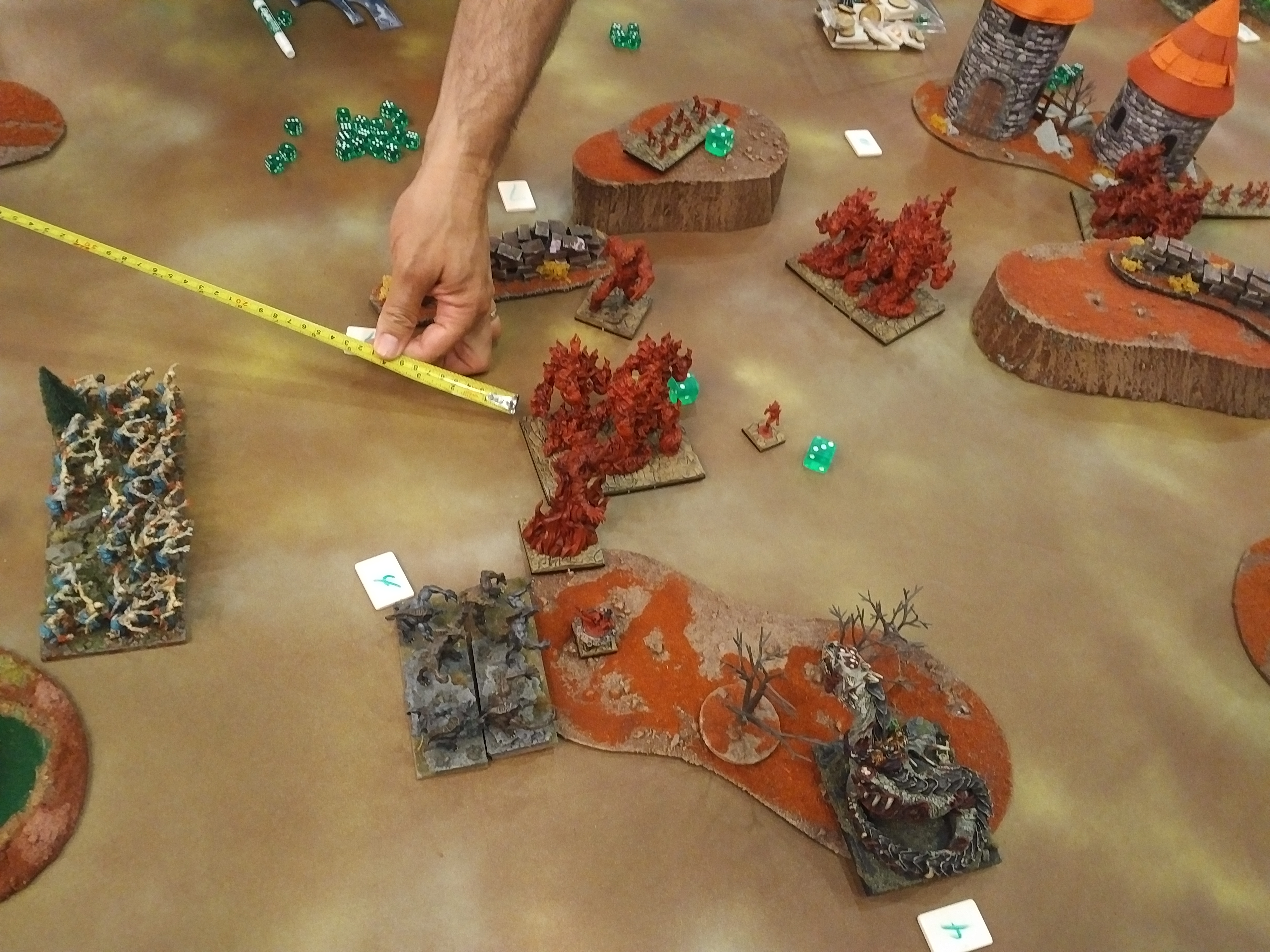 Seeing an opening, Agnes corkscrew charges the flank of the Soul Reavers, along with a derpy hindered Fire horde charge into their front. Maybe with bane-chant the horde manages to do something, but the real story here is Agnes incinerating the vamps with 18 CS4 attaks. Other stuff happens – Bloodfire pumps unit strength into the Undead side of the board, the CLOFD tries to breath on the Werewolves, the Herald attempts to block said puppers (badly) – but it isnt as exciting. 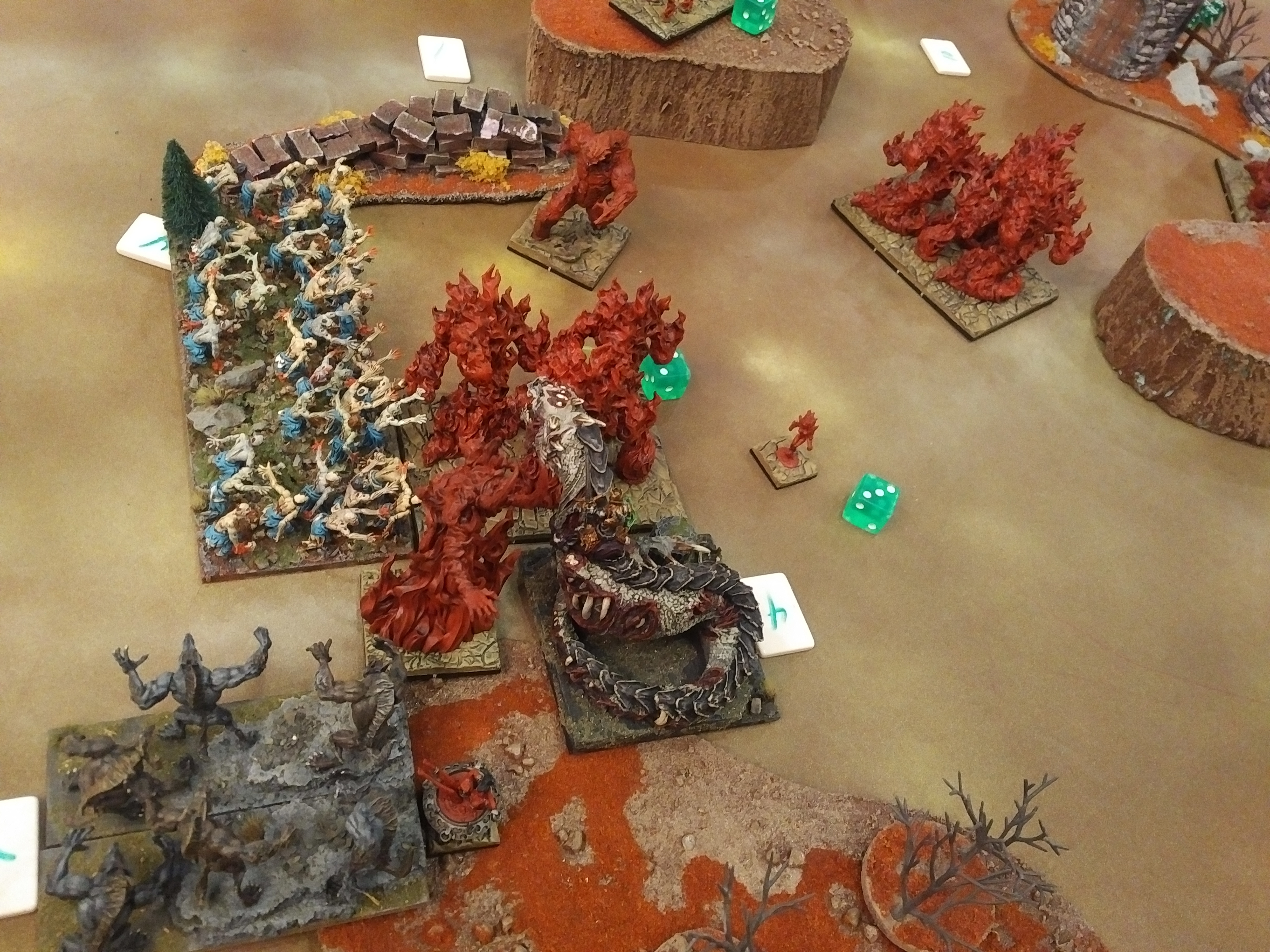 Undead 6: Everybody fights! The Zombies finally make contact, swarming a Fire hordes flank as their Revenant King slams into its front (hindered). While the Zombies manage a couple wounds, the King rolls like a boss and pops the elementals. Meanwhile Agnes facetanks the Werewolves again, thanks to her friend the forest. 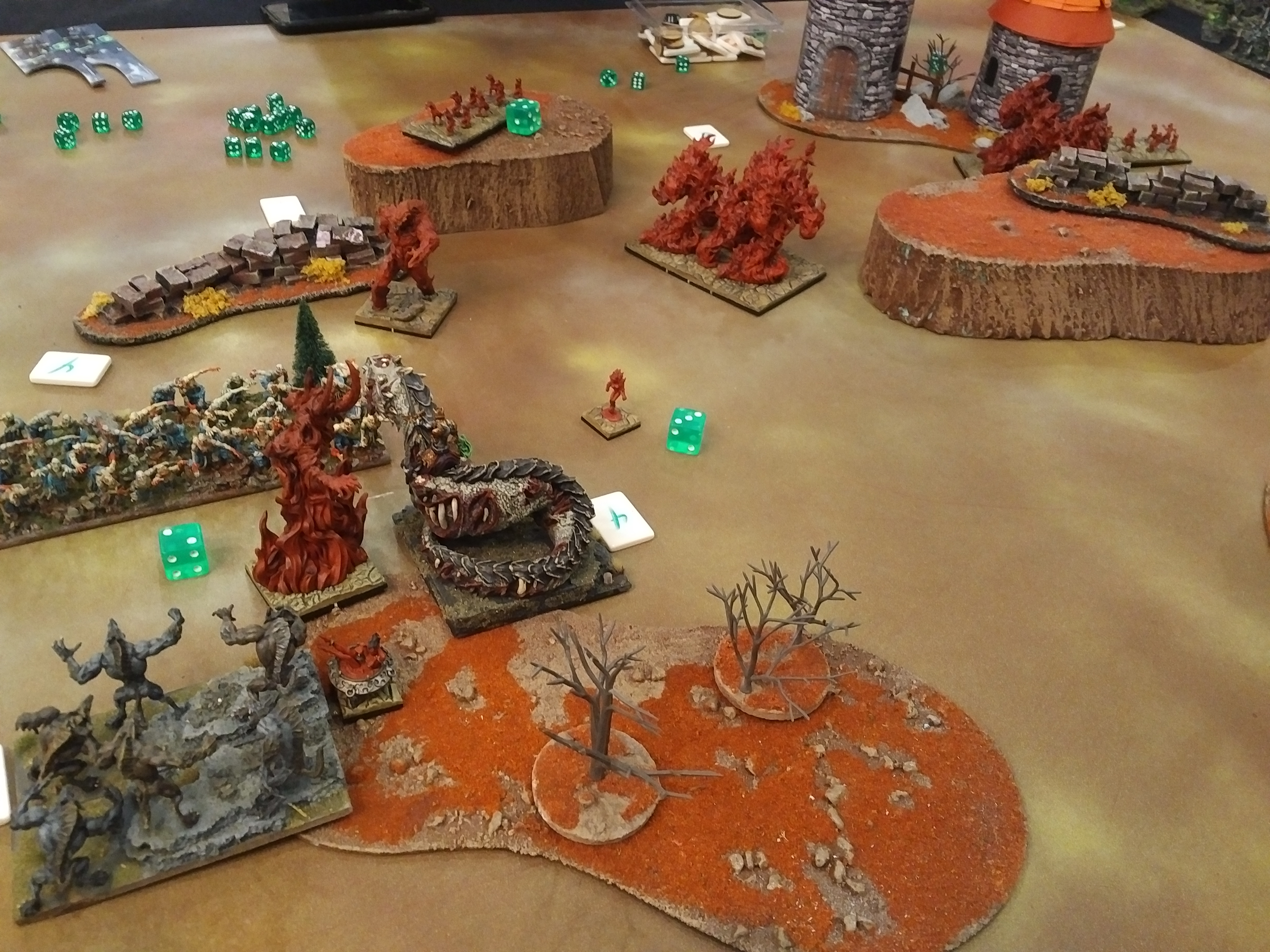 We prepare for Turn 7 but it doesnt happen.

A great first game against a great guy, just what I needed after months away from KOW. Joe would go on to win Best Sports and a pile of swag, all very well-deserved.