The lads are getting ready for the Unplugged GT this weekend, so I escaped the house and headed over for some much needed hang-and-game. Albanyadriel had just finished up his vanguard-happy 2k Forces of Nature for the event, and I was excited to burn it to cinders.

This might be where the army sits for 2000 points, really happy with it. Ive admitted that bane-chant is still useful in an army of CS(2+), embraced the martyrdom uber-heal, and come to terms with Agnes fitting too well to swap out for the ABP right now. Excited to add Jarraiders for 2250, and still working on a fifth fire horde to push the army past 2500, with two Komodons chilling in their boxes, but dig where COK18 has shaken out for the Bloodfire.

A Nature army without the usual lightning storm and not a single Beast in sight! And also an army that approaches speed from a different angle, for the most part relying on vanguard instead of flying to get a jump on things. I can dig. But asking for a friend: Whats a Forest Warden?? 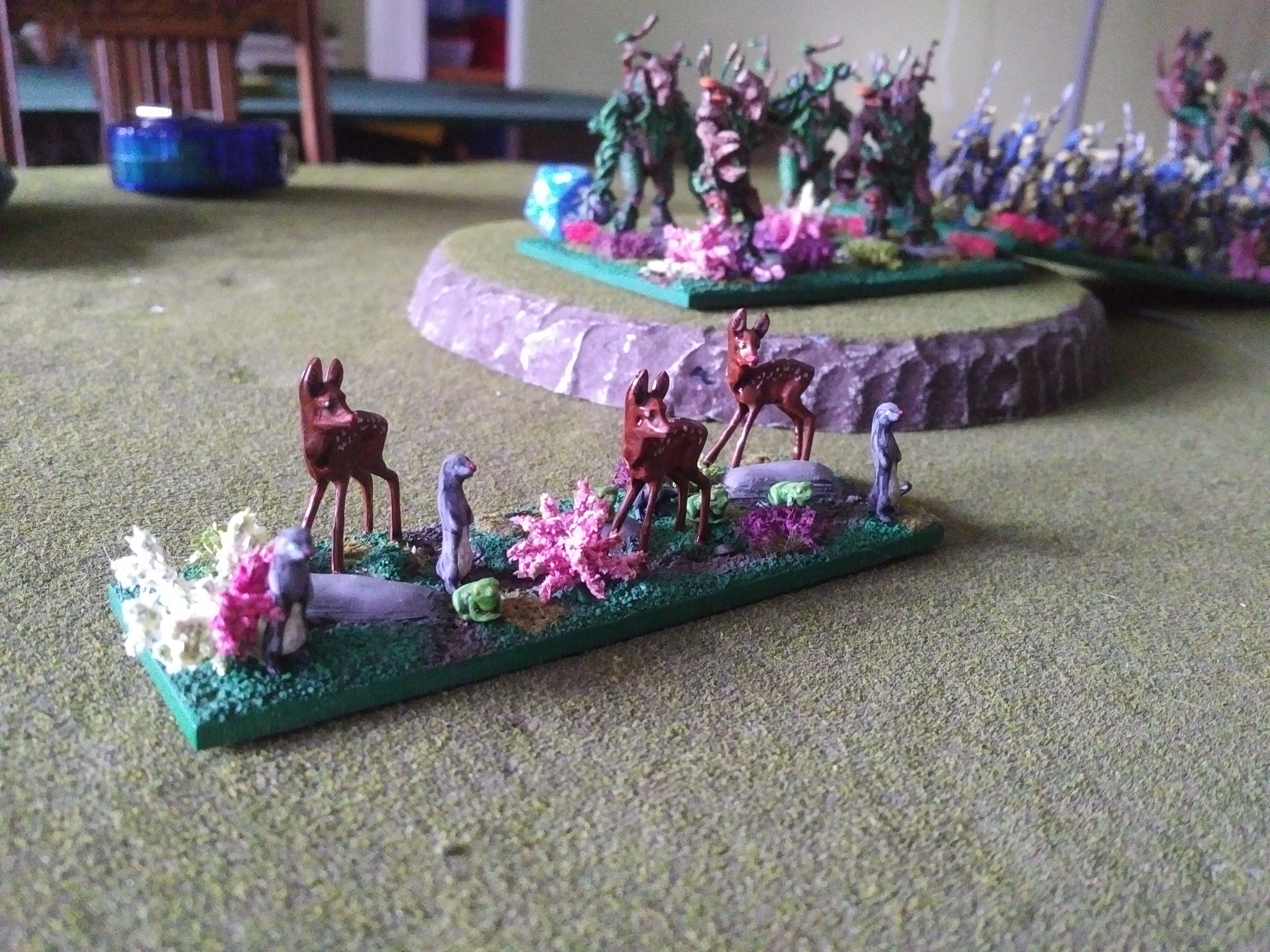 We rolled up Eliminate, then didnt read the part about putting a token down in the center. So we were going to beat each other up and try to take some tokens. Checks out! Sallies won the roll off and took it. 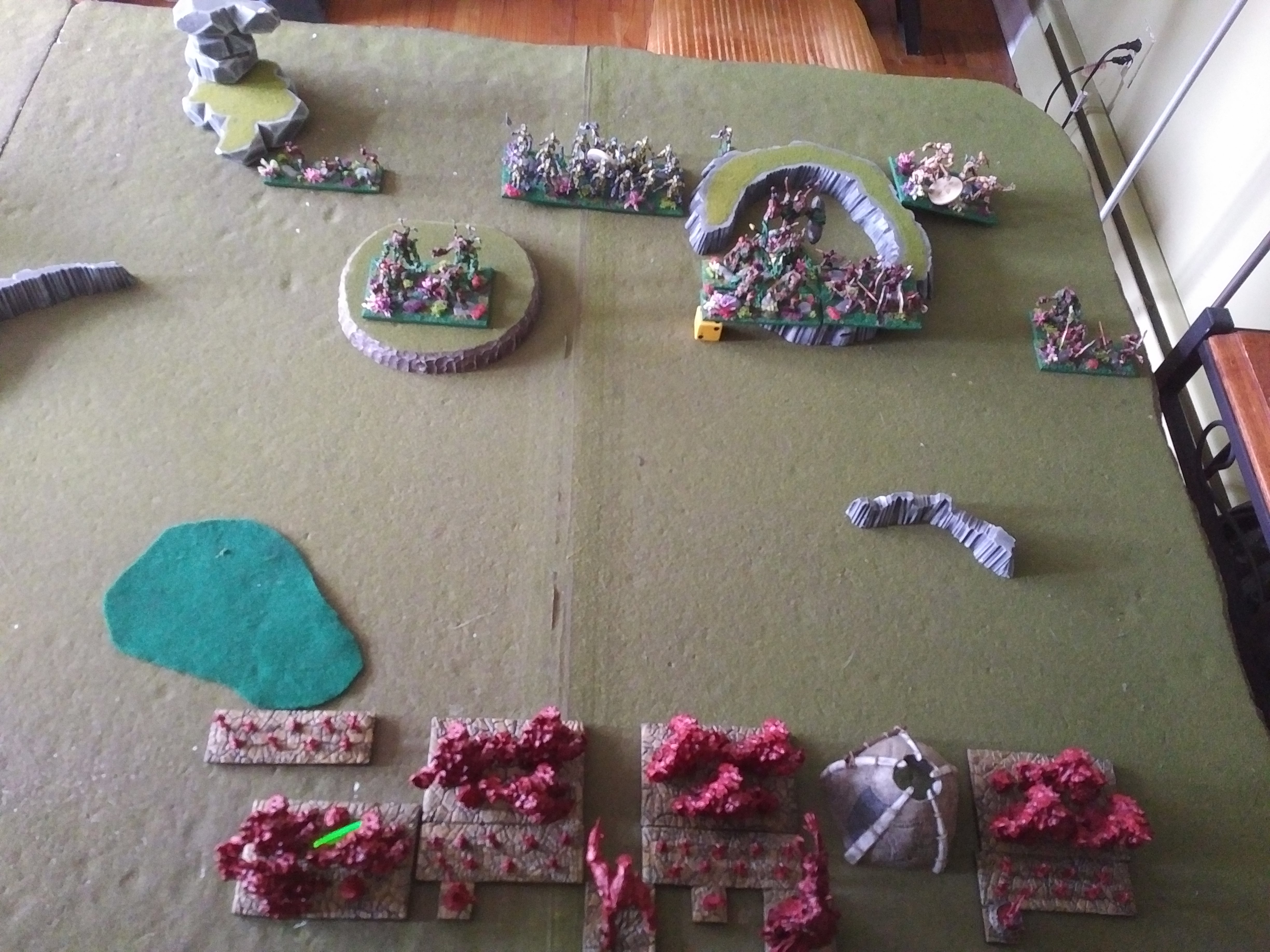 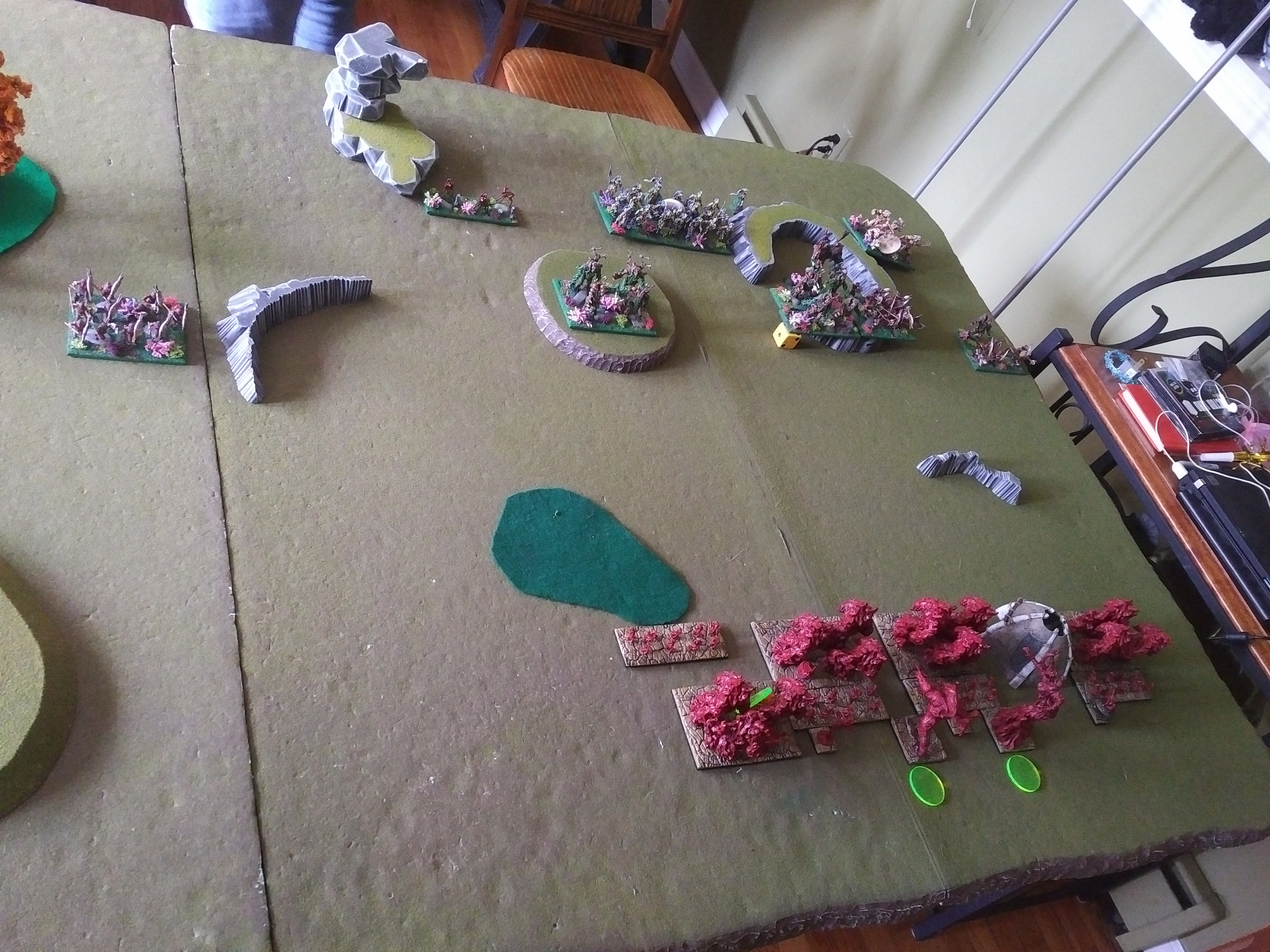 ​
Ok, all the vanguards! 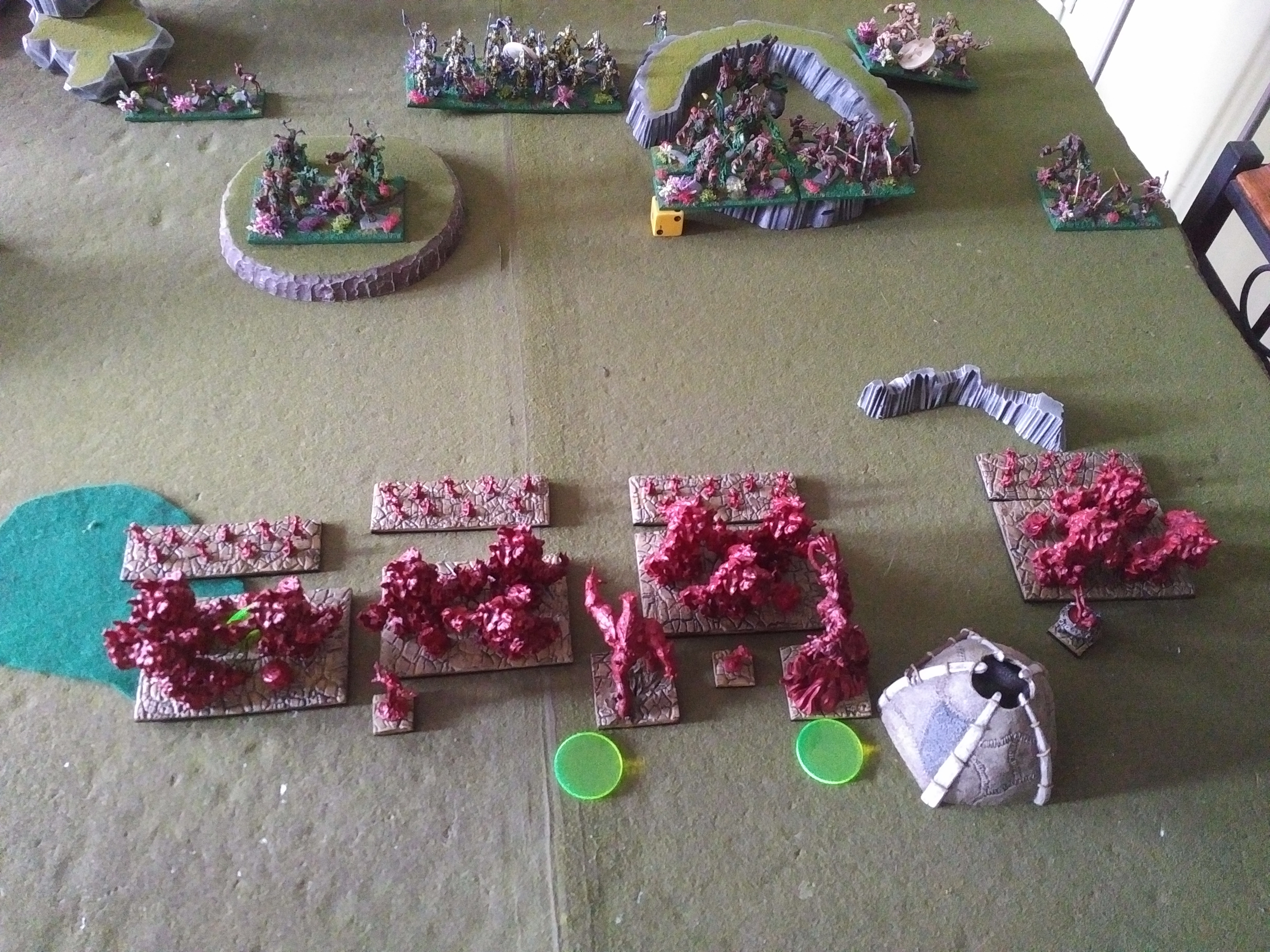 Bloodfire heaves off the starting line. Worth noting that I had bungled my deployment a bit, having deployed my Sprites behind the Fire hordes, which is typically my anti-shooting tactic, not my anti-melee play. This meant my Sprites couldnt stroll into range and breath on things, and also kept the entire line from advancing very far, as I needed the Sprites up front to chaff things. Not game breaking but certainly kept me from punishing the vanguarders as is my want. I had also kinda screwed the leftmost, token-baring Fire bois by deploying them last and unsupported on a wide open flank, rather than nestled somewhere closer where they were less likely to be flanked. Bleh.

Anyway, the leftmost Ember Sprites breathed on the left Forest Shamblers, for a first wound. 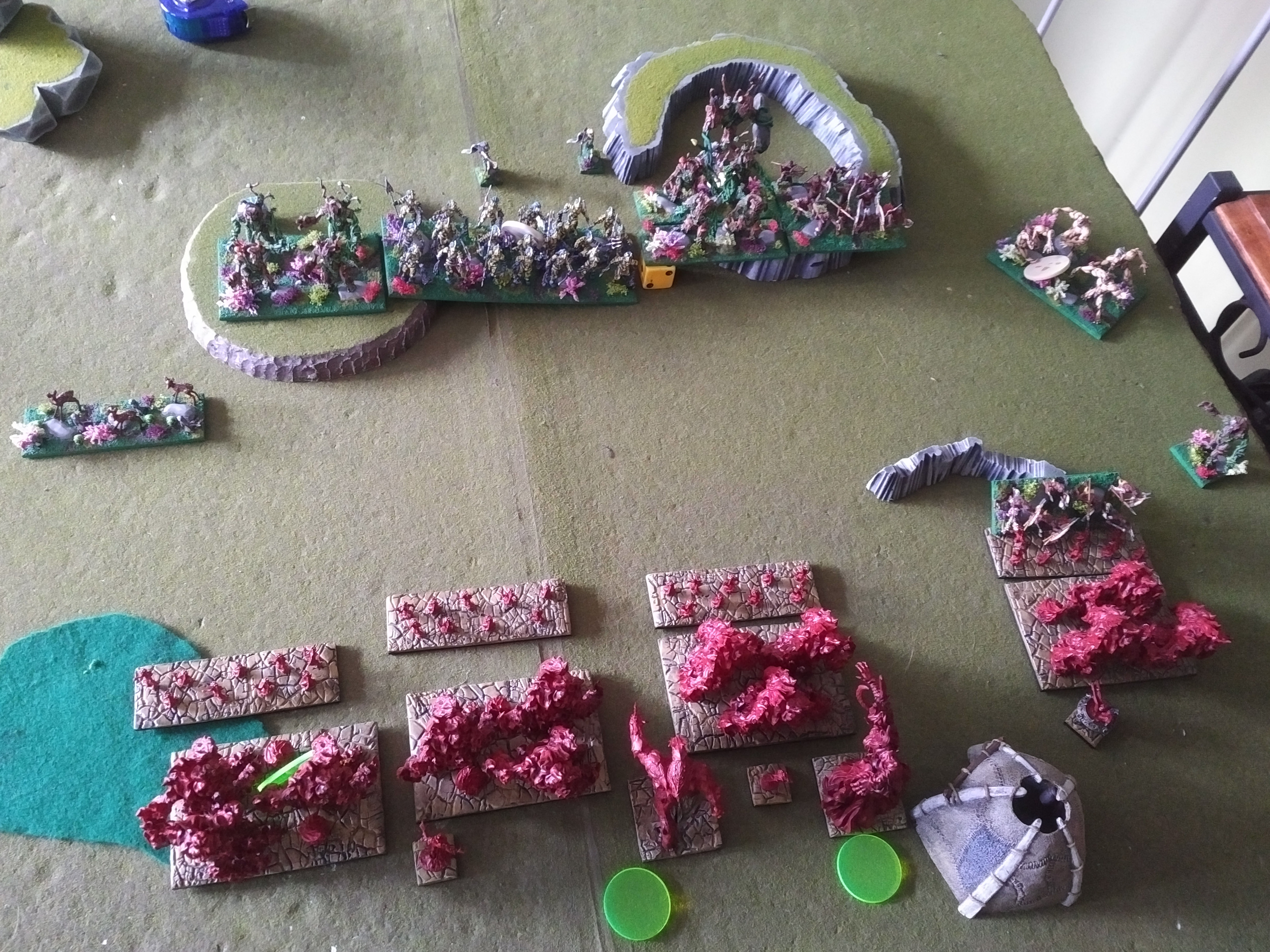 Nature largely shores up the line in response, healing the Shambler wound as they go. The Hunter troop ranges out and pounces on the rightmost Sprites, awkwardly hitting a lot despite being hindered and accidently routing them. Works for me 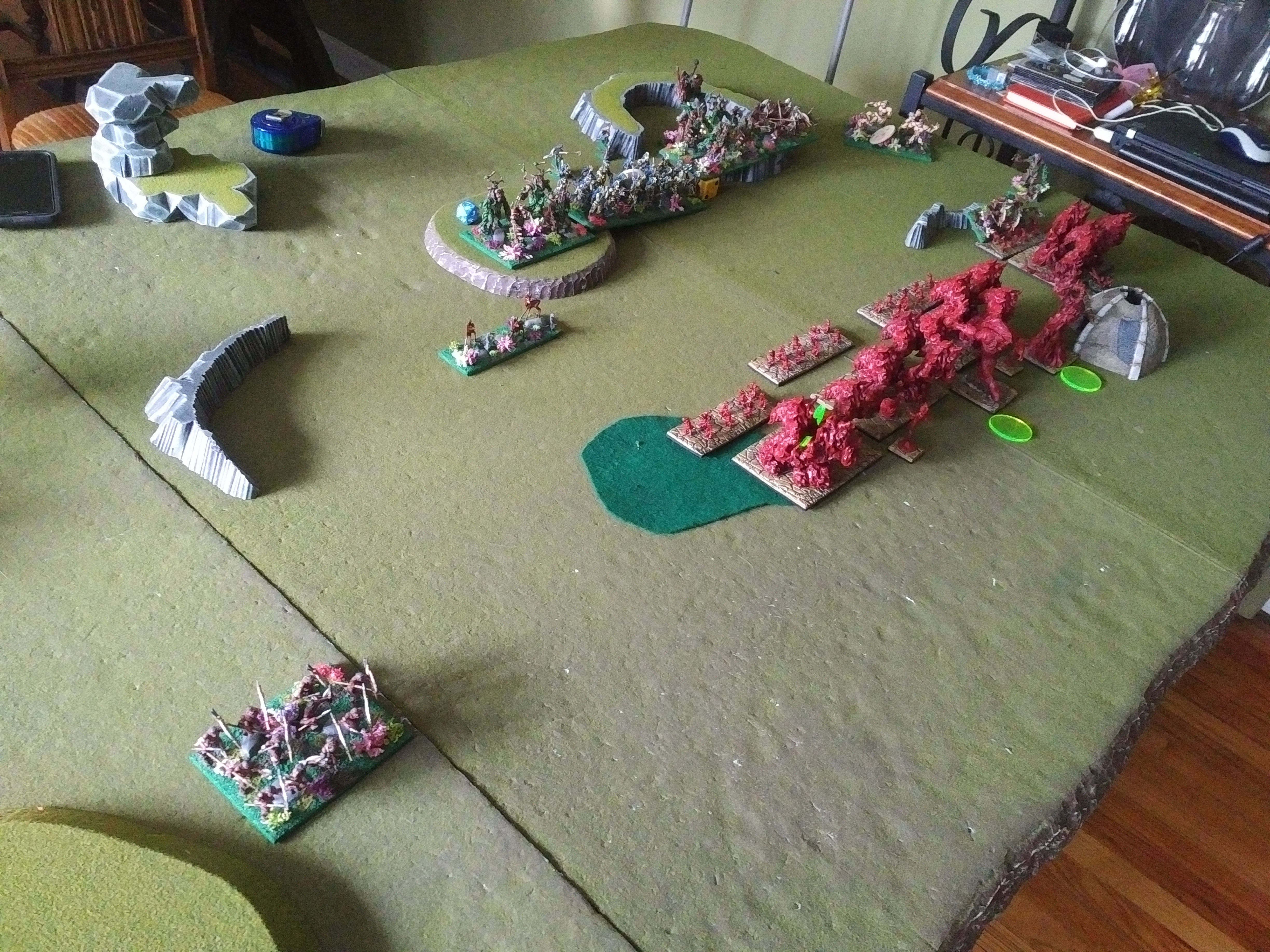 Meanwhile the flanking Hunters rip across the table! 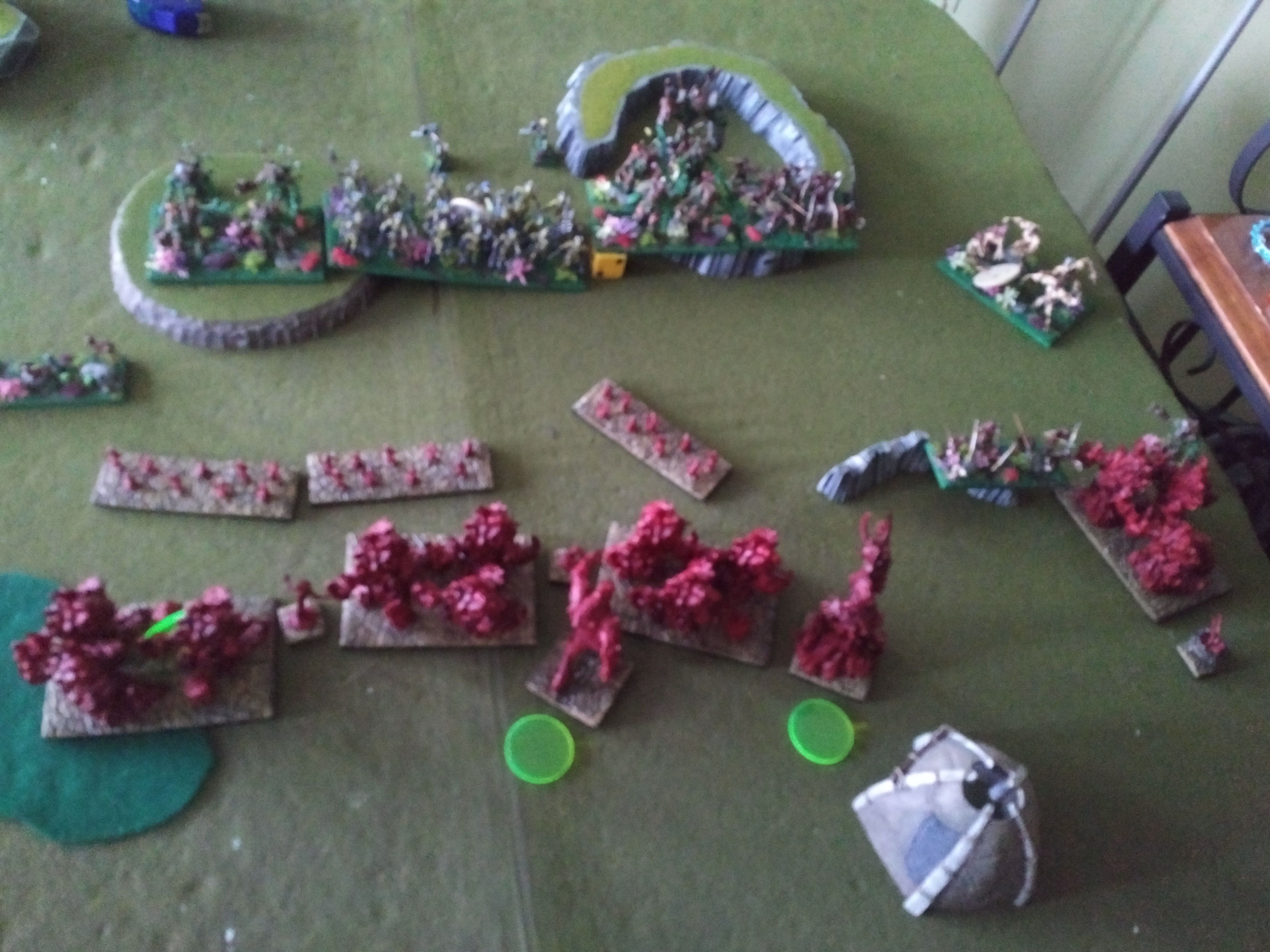 Speaking of Sprites, the lil dudes shuffle into the line of fire while a lot of breath attaks come online and the Forest Warden (?!) cops a Fire Elemental horde to the face thanks to the untimely death of their Sprites last turn. I hesitate on sending the token Fire horde into the Woodland Critters on the left – honestly I didnt trust that a) they could kill them, b) the Forest Shamblers next to them wouldnt be ashes, and c) the Fire horde could take a Shambler horde in a grind. Honestly still feeling dumb about that, I should have embraced the fury and gone for it, but youll see how that flank turns out. 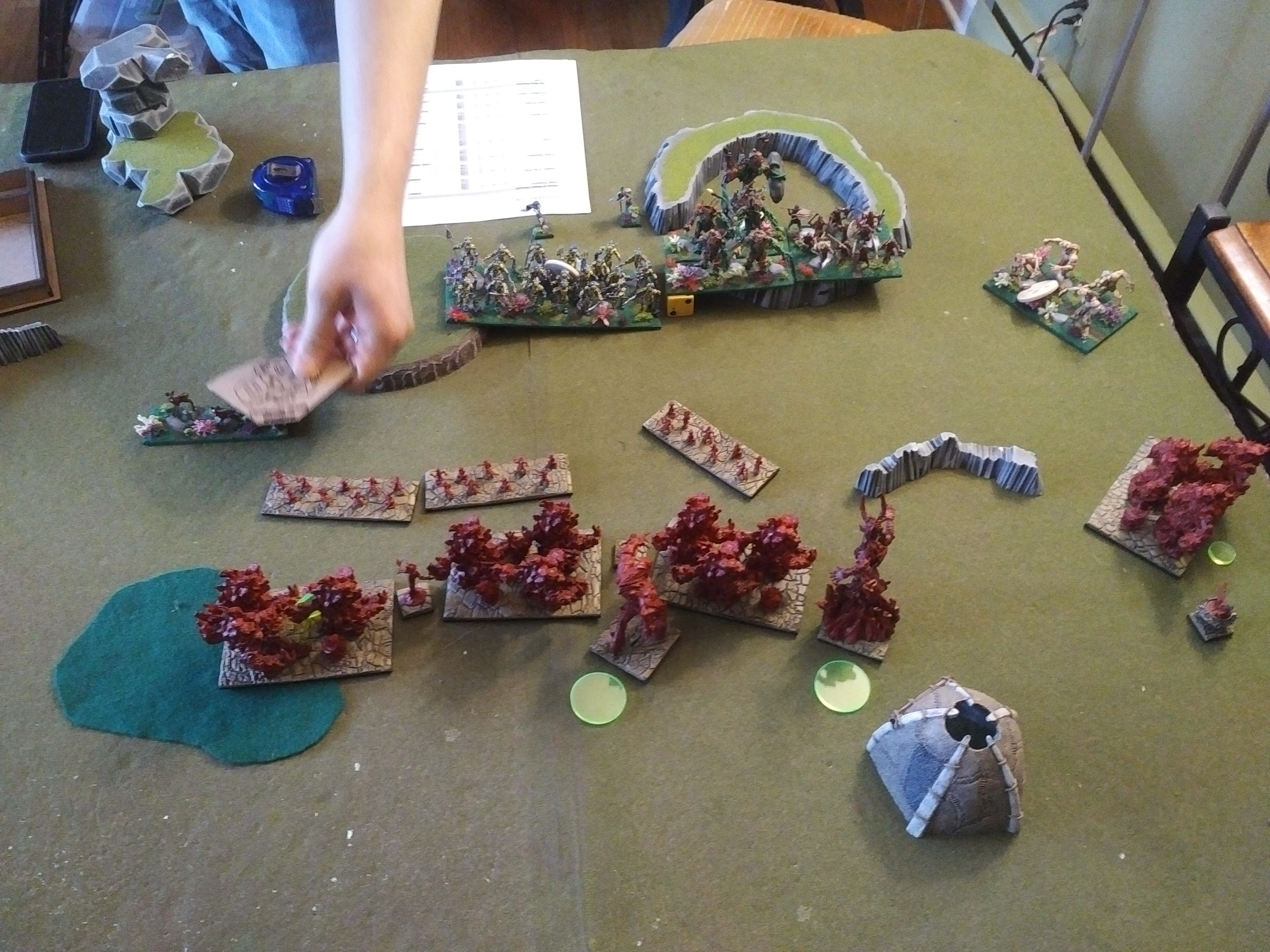 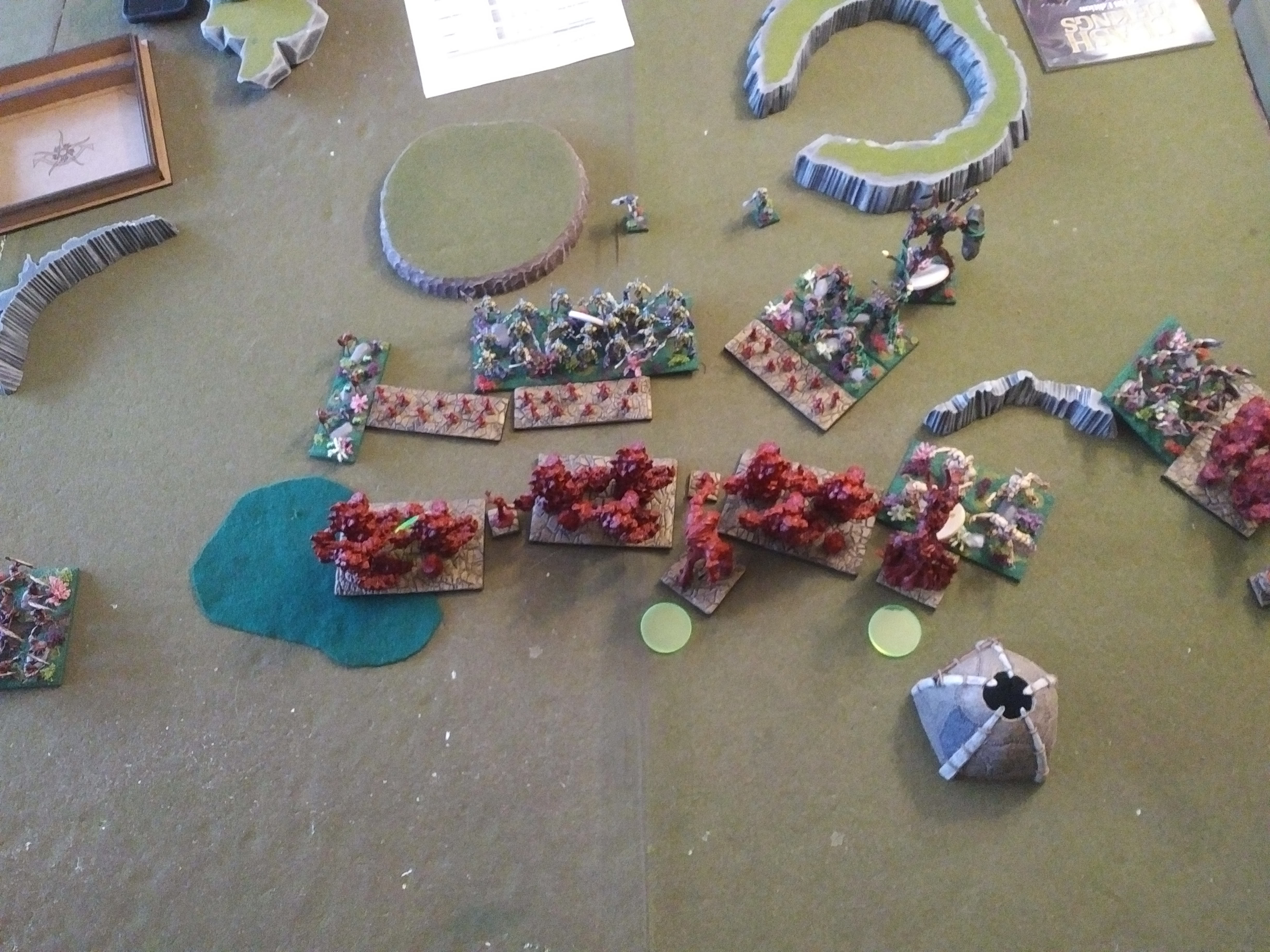 Nature gets angry! Critters flank some Sprites, Naiads power into some other Sprites, Shamblers tackle yet more Sprites, Lycans trip over that annoying obstacle on the way into Agnes and Hunters likewise stumble into the Fire horde that mauled the Warden (RIP). The flanking Hunters of the Wild regiment meanwhile angles in and complicates things for Bloodfire next turn . . . 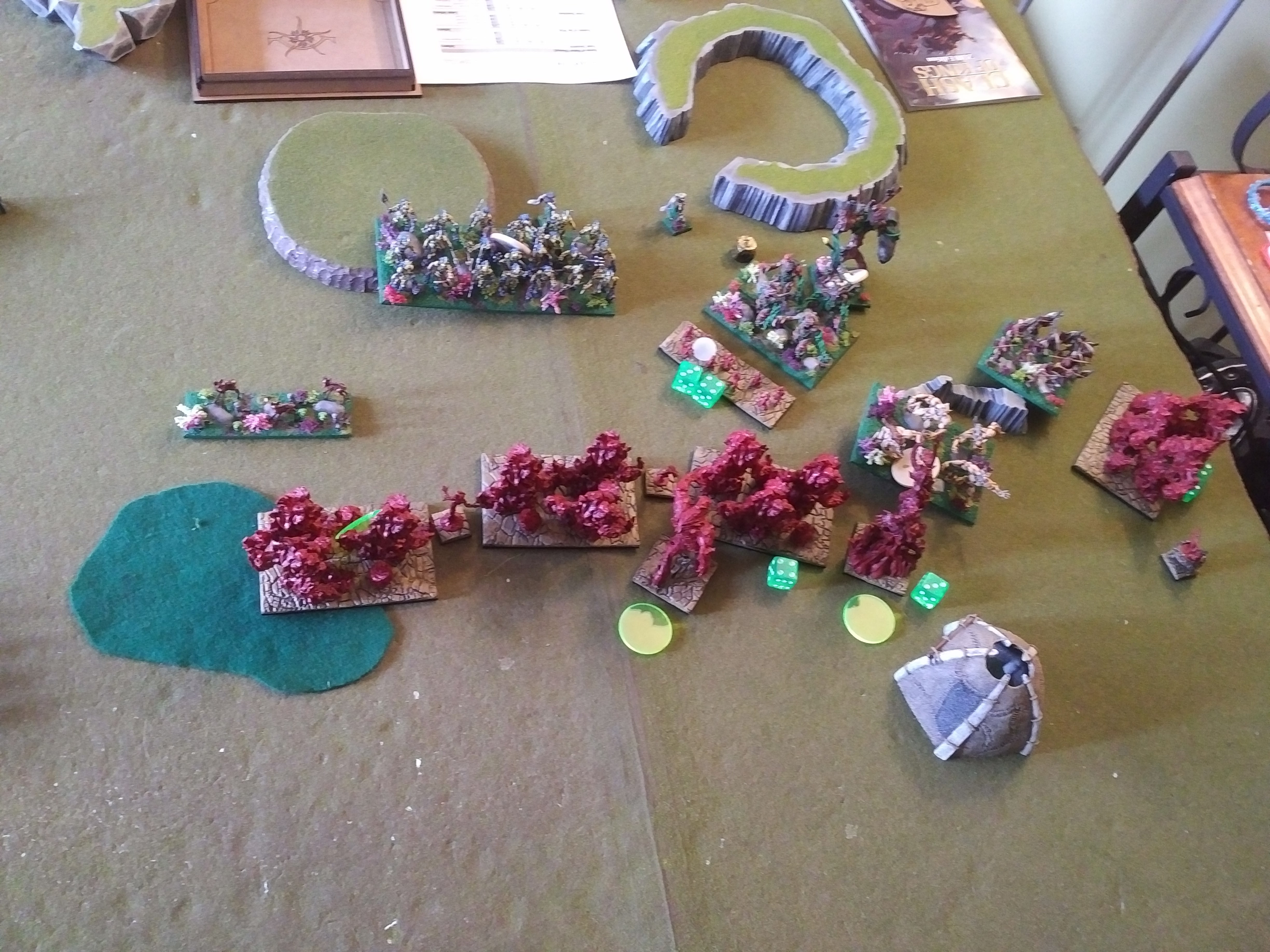 Druids kick Rallying (2) onto the Forest Shamblers with Aura of Heroism and rip 4 damage into a Fire horde thanks to Alchemists Curse (COK18 in the house!), then fighting happens. Critters scatter their Sprites, Naiads awkwardly Hammer of Measured Force theirs to death, the Shamblers only manage to waver theirs, the Lycan caress Agnes for 3 damage, and the Hunters do 7? to their Fire horde. A mixed bag all told. 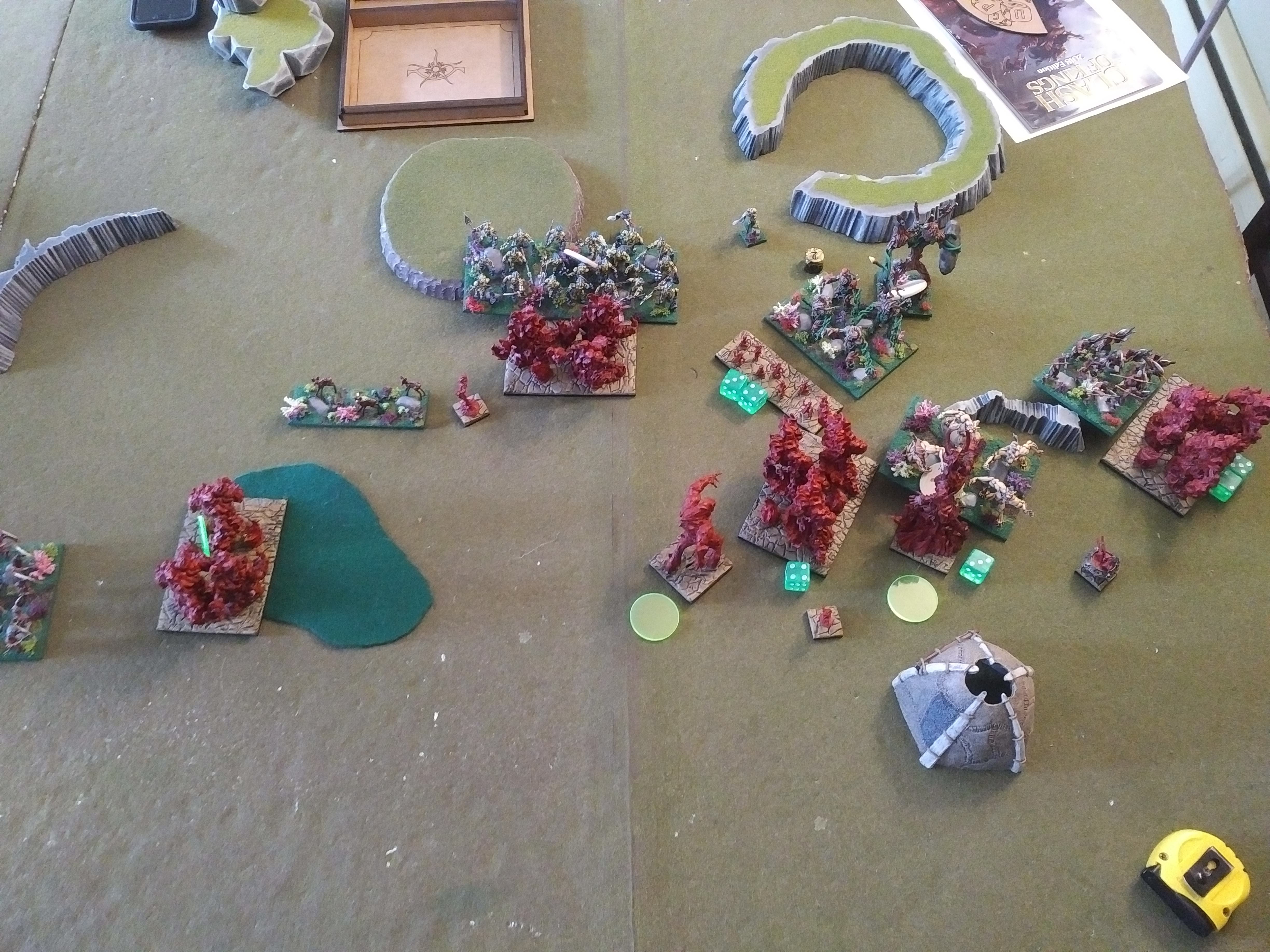 The Bloodfire Supreme Bloodstoker thinks for a long time about that left flank, and ultimately chooses poorly, deciding to surge the token Fire horde into the Hunters and either break through or hope to weather the Hunter-Critter sandwich for a turn. Spoiler: They needed 4, the Mage-Priest only managed 2 out of 8 with elite. Frowny face. 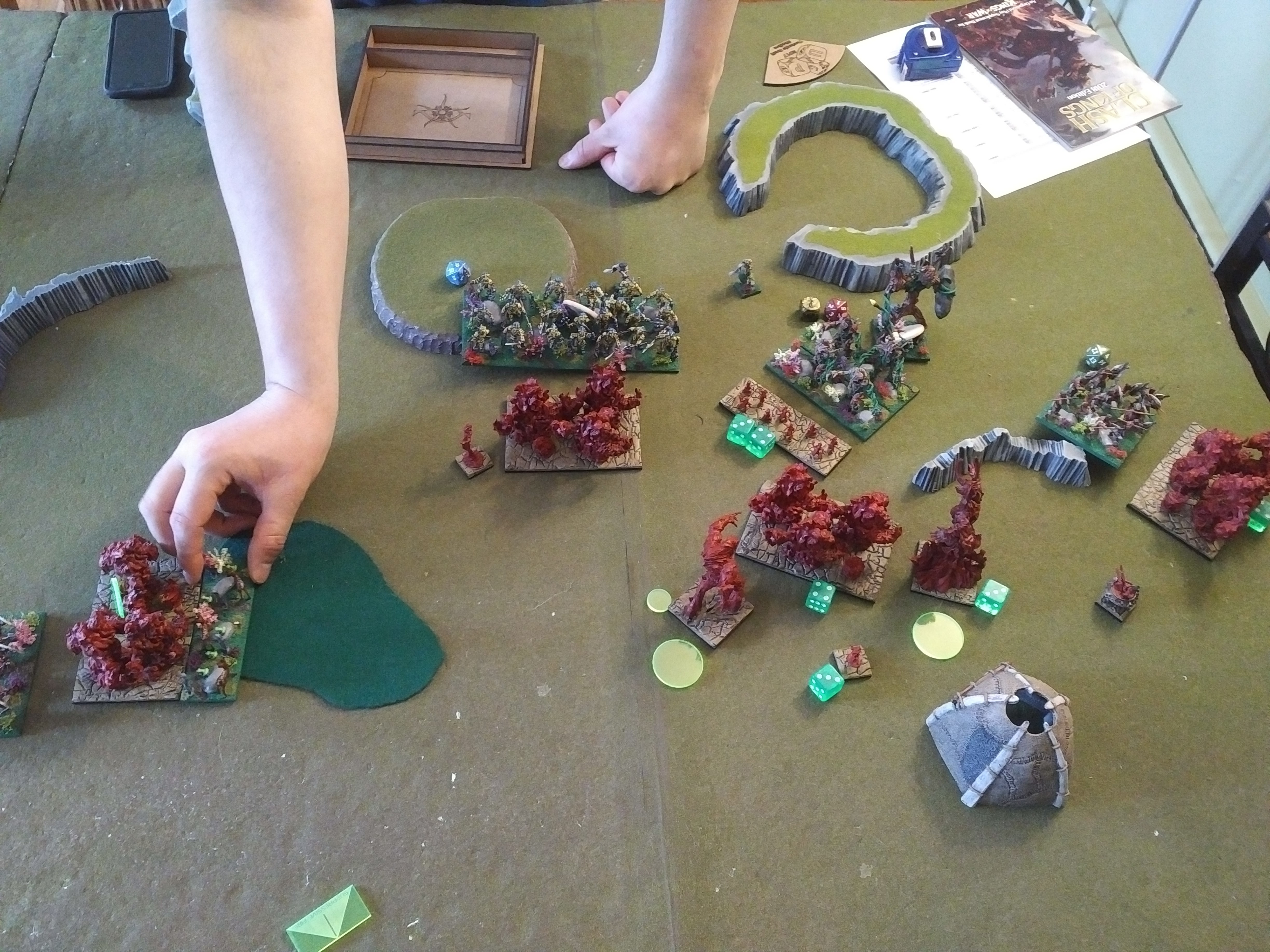 There was still carnage aplenty, if somewhat mediocre dice to accompany it. A Fire horde resignedly charges the Naiads, punching a few but knowing theyre doomed without help. Another Fire horde counter-charges their Hunters, doing decent damage but failing the double rout rolls. Agnes and a cheeky Fire horde flank obliterate the Lycan, grabbing their token, shortly after the CLOFD manages a single damage on the Forest Shamblers, despite a lucky double bane-chant, and the little Mage-Priest syphons off 3 damage from the rightmost Fire horde with Martyrs Prayer. 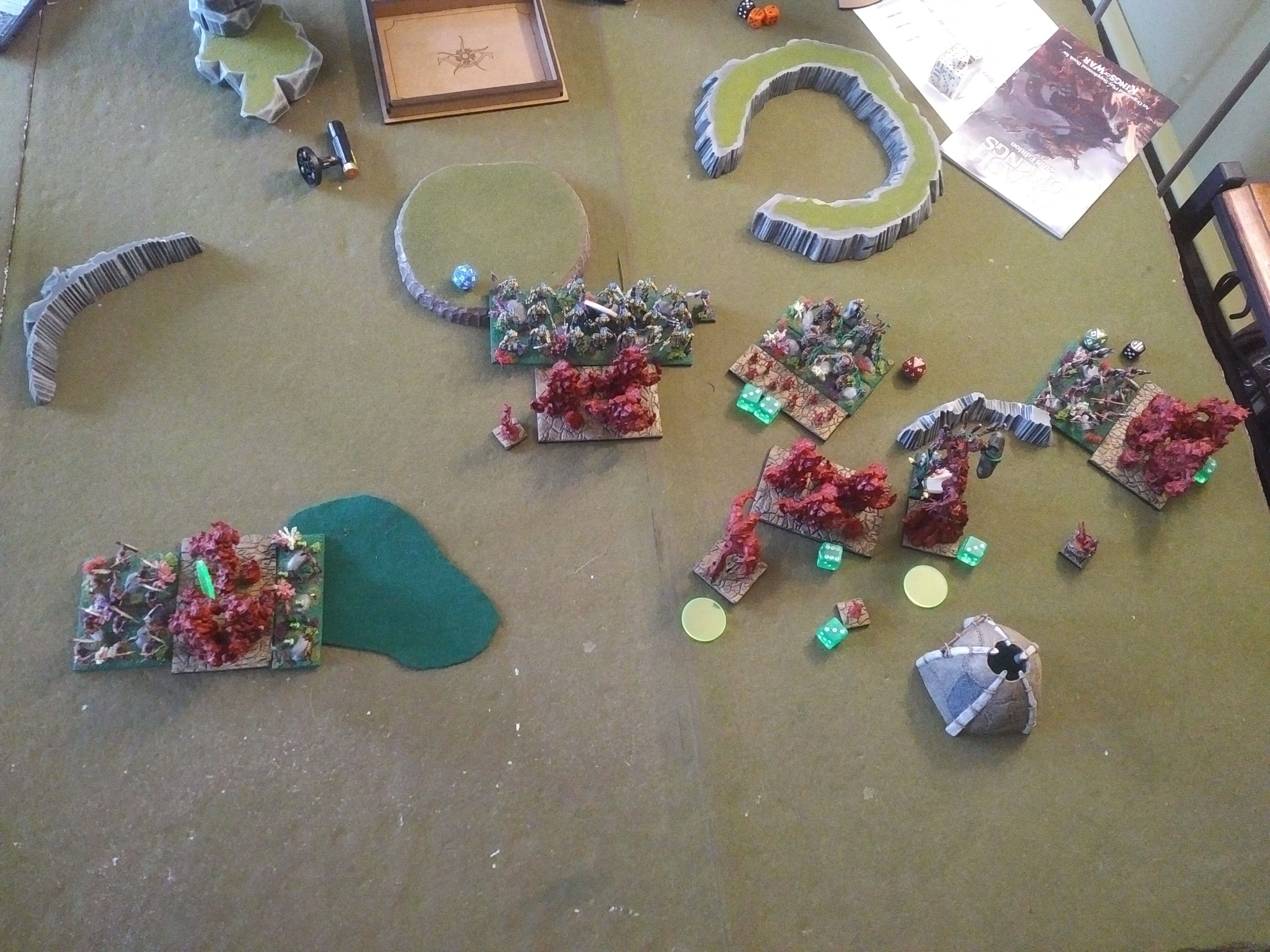 Turn 3 continues to be violent with lots of Nature charges and counter-charges: rapidly regenerating Naiad into Fire horde, Shamblers into annoying leftover Sprites, Tree Herder tripping over that obstacle and tackling Agnes, Hunters back into that right Fire horde. Also the token Fire horde met their destroyers: 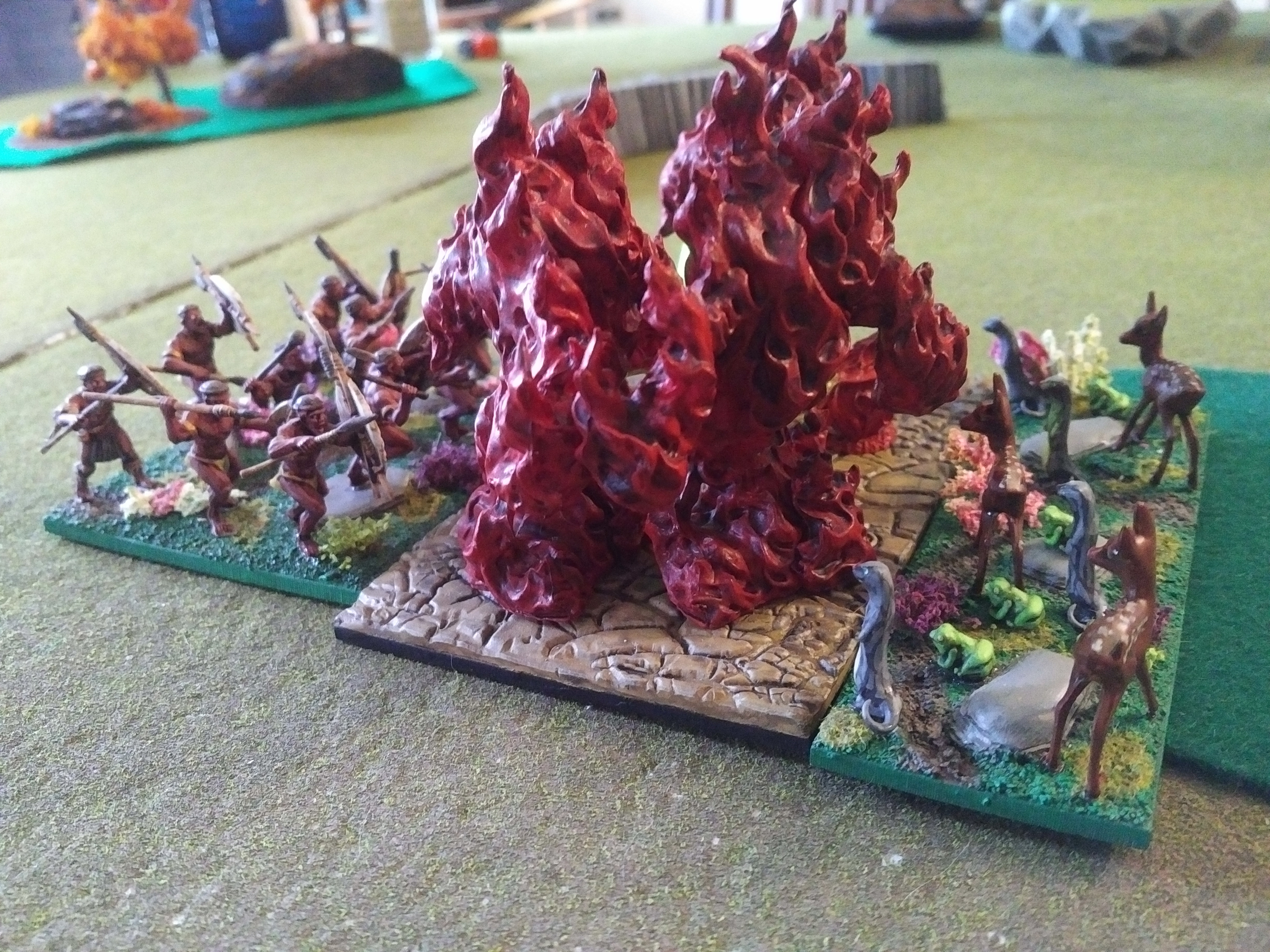 ​
This looks . . . bad? I mean, we are a roiling semi-sentient mass of molten bloodfire, right?

Druids Bane-chanted the right Hunters and Alchemist Cursed another 2 wounds into the same Fire horde as last turn, putting them to 6 damage. 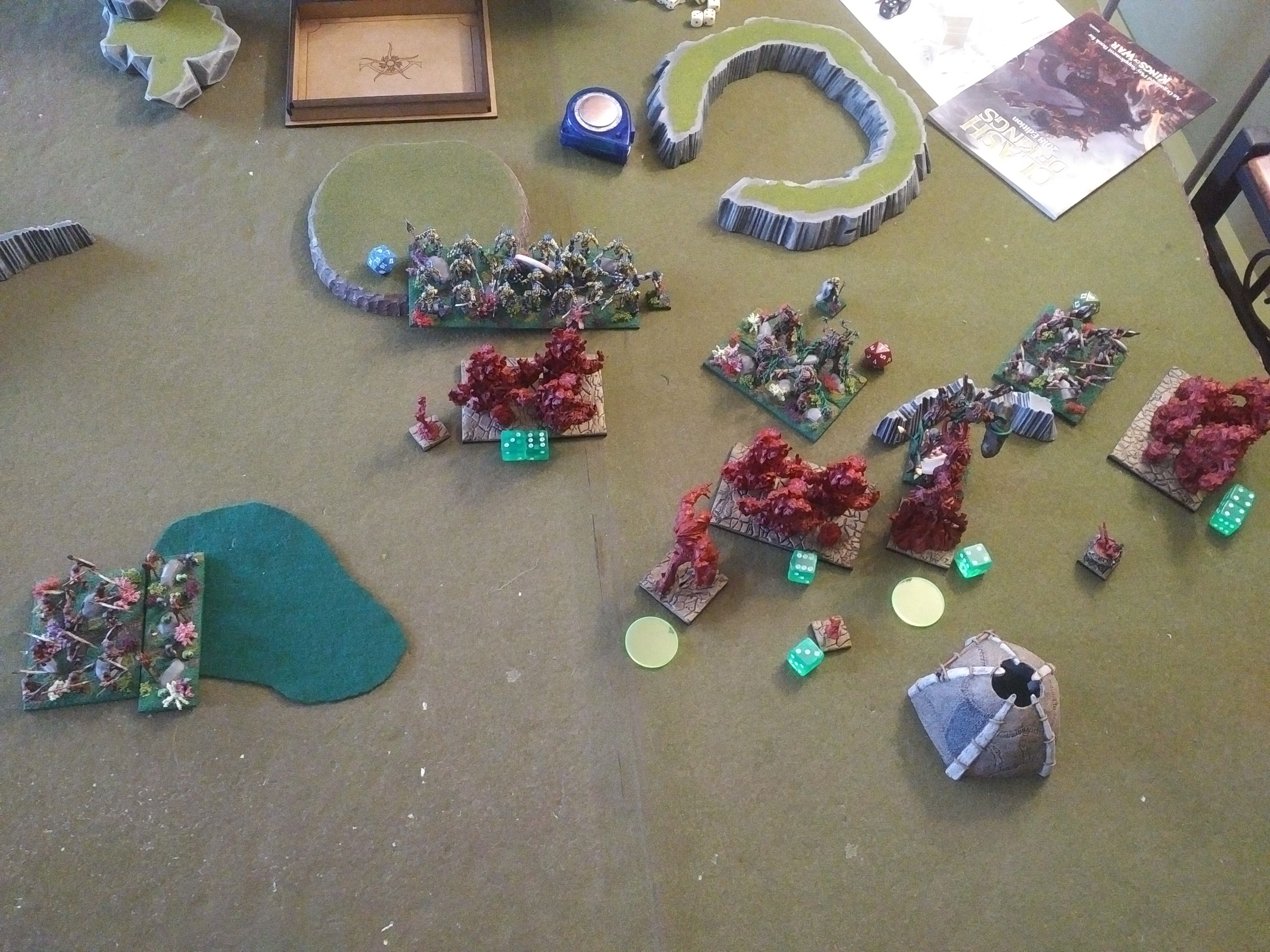 The Naiads roll amazing and pile 9 damage on their Fire horde, the Shamblers pulp their Sprites, the Tree Herder bops a single wound on Agnes (bye bye death ray), the Hunters damage their Fire bros to no avail, annnnd the Woodland Critters eviscerate the token Fire horde with 45 attaks, vicious and some stunning dice (the Hunters + not having any inspiring helped :P). They died. 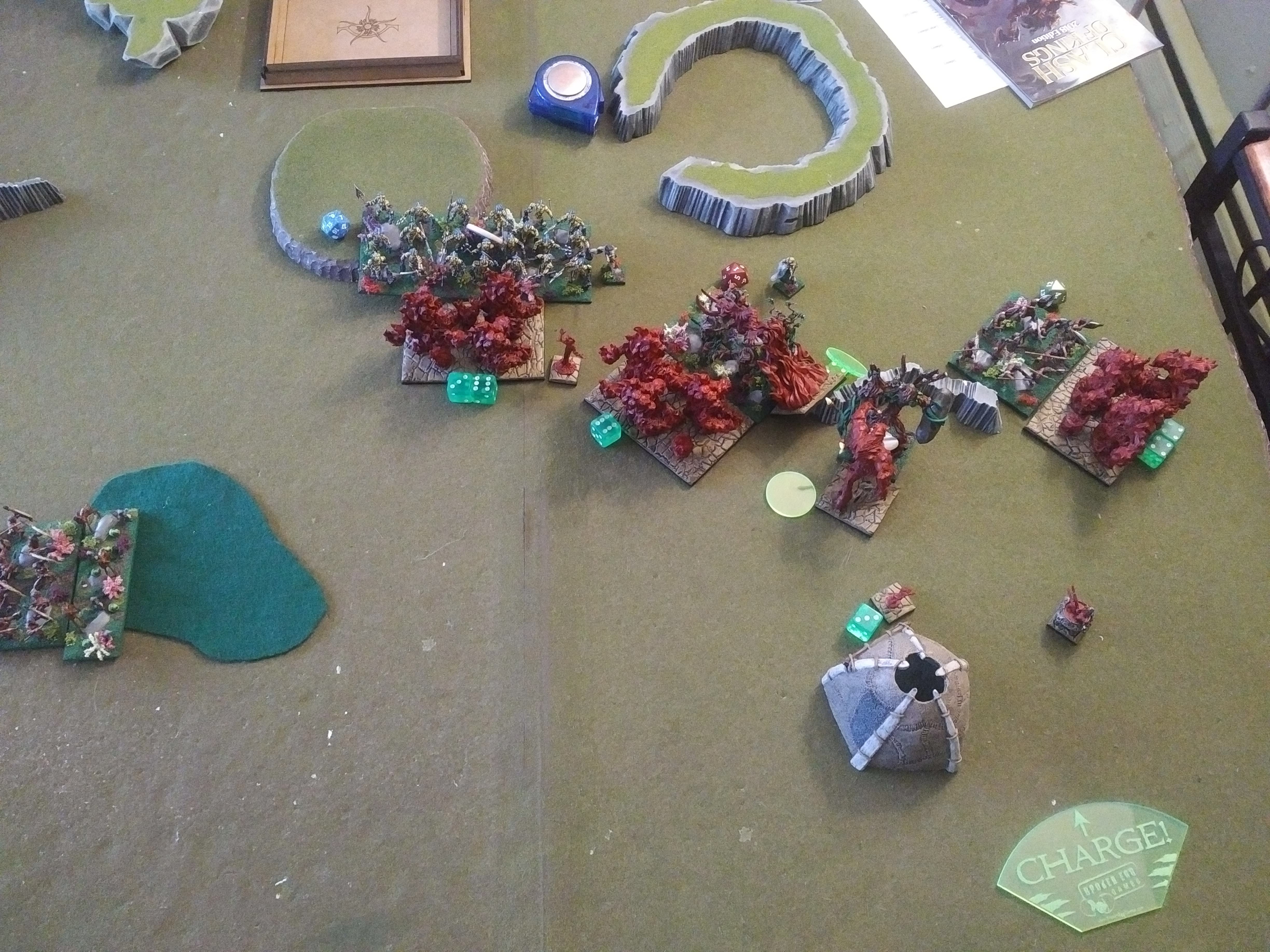 Sallies Turn 4 and the boiling punches intensify. The cursed Fire horde and Agnes team up on the Shambler horde (Agnes trips on the damn obstacle this time on her way into the flank), tagging in the CLOFD on the Tree Herder. Hunters and Naiads are counter-charged by their fiery dancing partners. 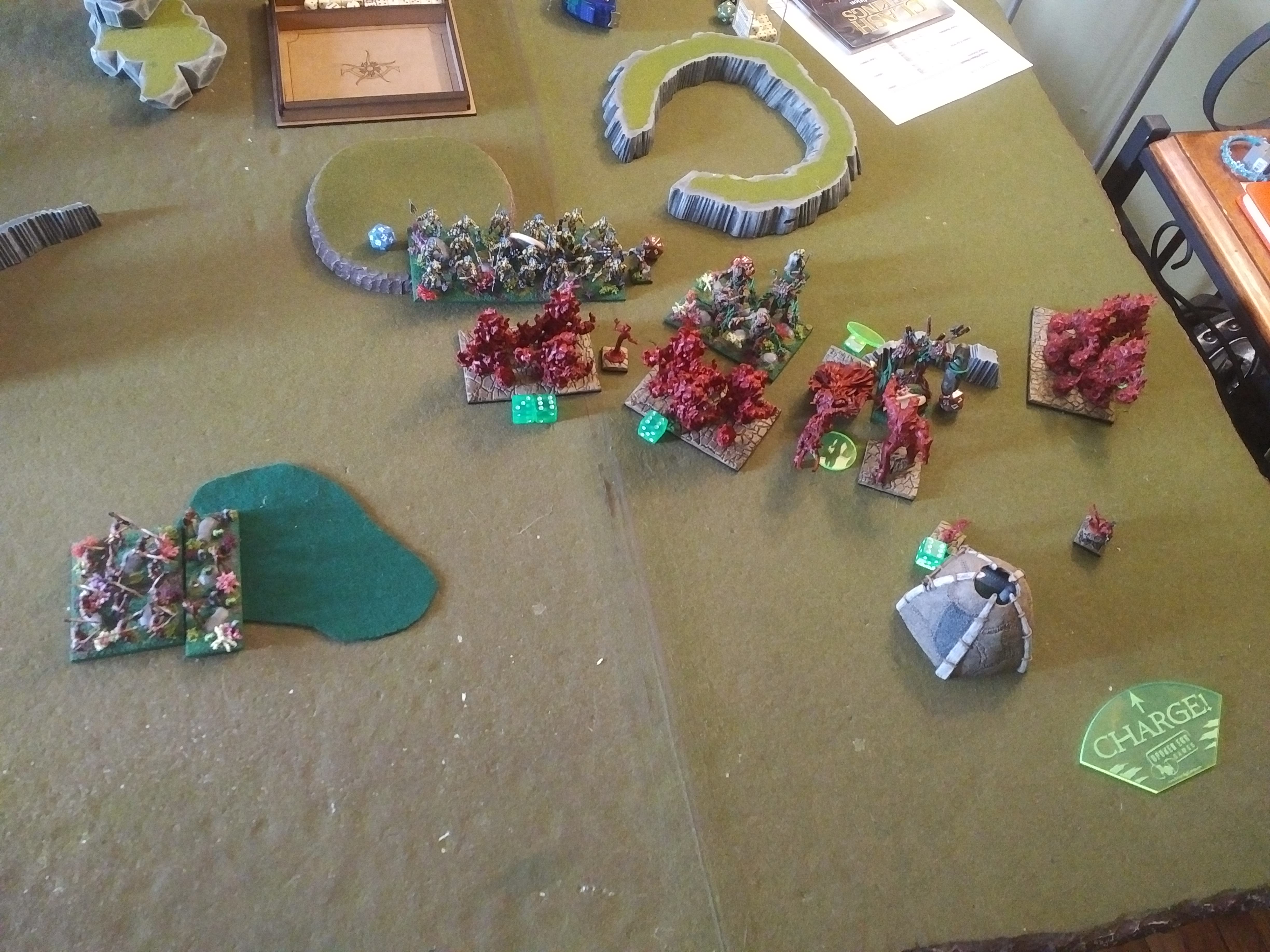 When the punching stops the right Hunters are dead, but despite decent damage, rout tests on everybody else are not kind. 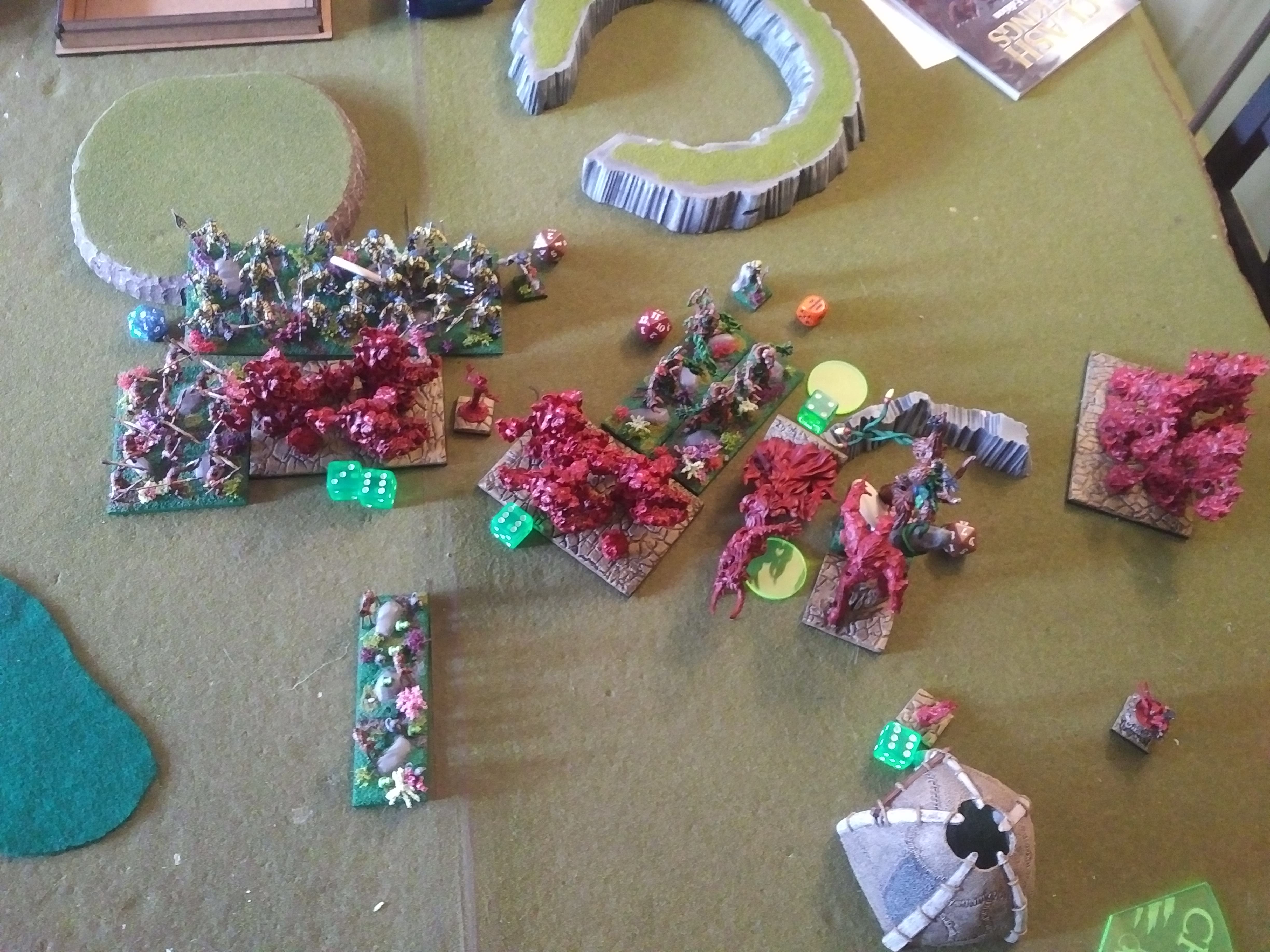 With a cry, the flanking Hunters of the Wild leap into the flank of the Naiads Fire Elementals, as the Woodland Critters cavort deep into the Bloodfire backfield. The Naiad lend their measured tridents with a counter-charge, accompanied by counter-charges into the CLOFD by the Tree Herder and Agnes by the Shambler horde, with bane-chant help courtesy a Druid. The other Druid Curses the central Fire horde a third time, spiking a rerolled 10+ rout test to banish them! Damn, hippy chick, damn. 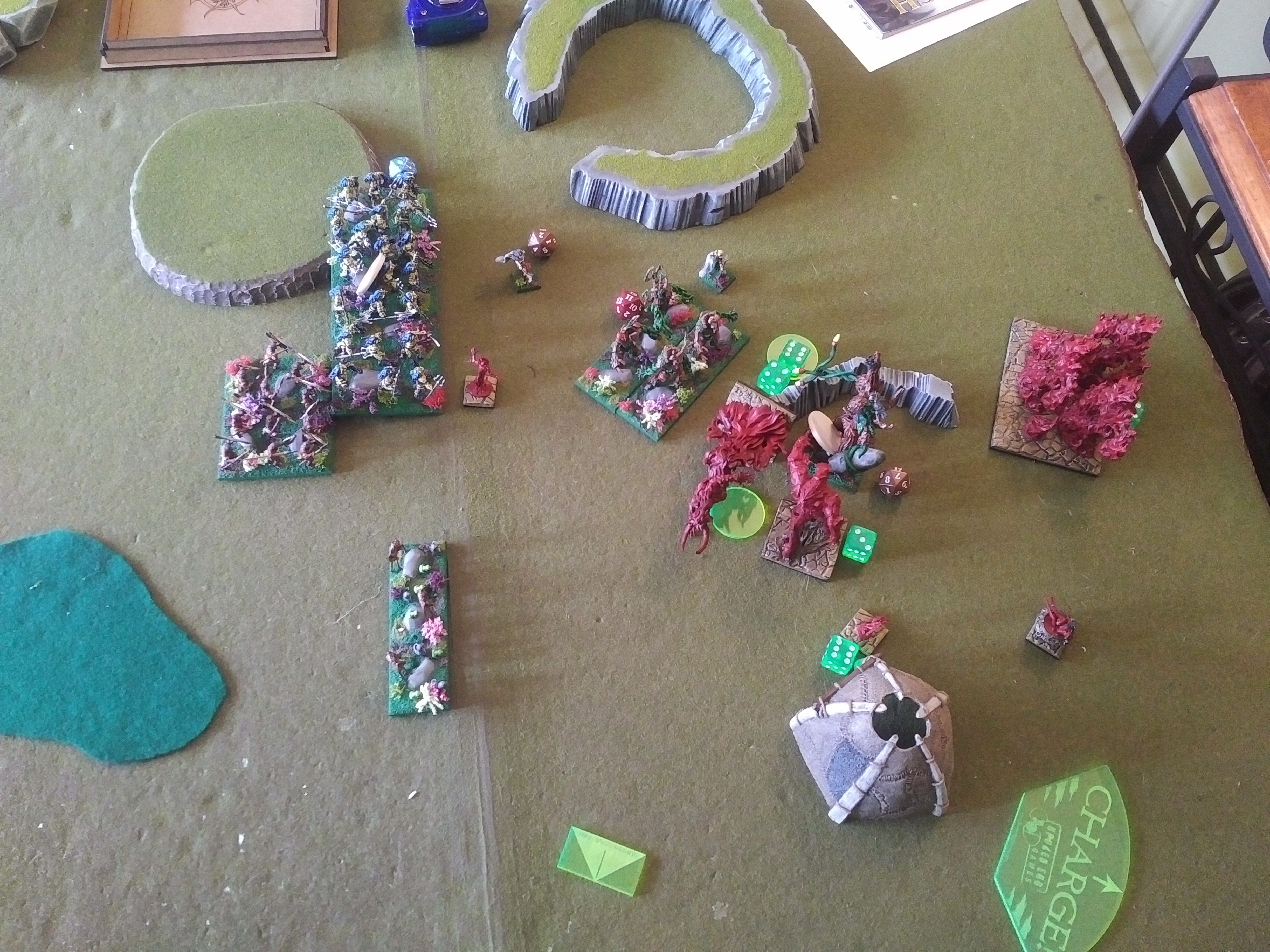 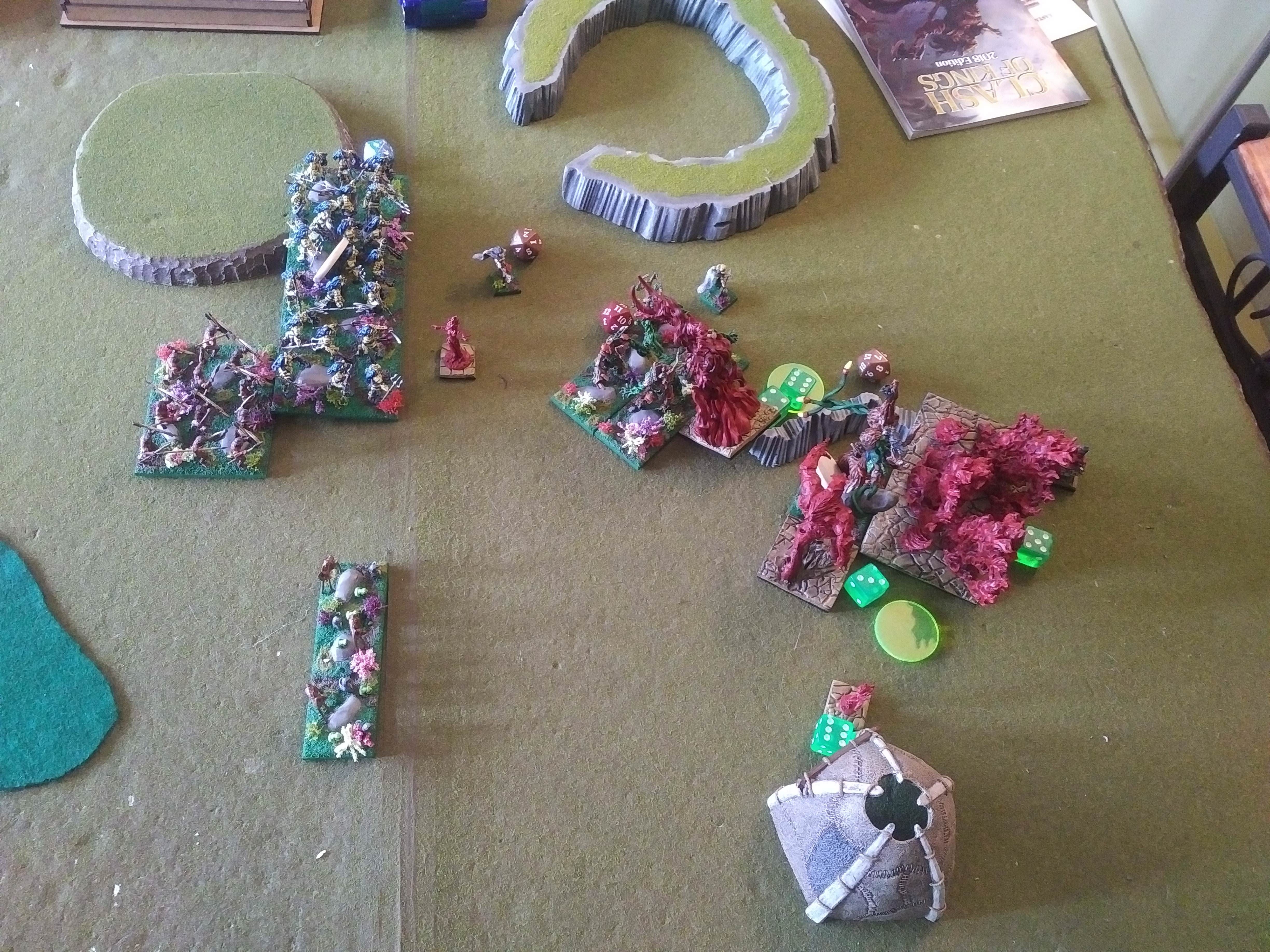 Heading into the late game and currently tied, Bloodfire is out for, well, blood. Agnes rounds on the Forest Shamblers and the last of the Fire Elementals flanks the Tree Herder to support the CLOFDs counter-charge. The Herald bane-chants the Fire horde, the big Priest body blocking the Naiads nukes the Woodland Critters with a fireball (*cue that scene from Bambi*) and the little Priest Martyrs Prayers 6 damage off of Agnes ❤ 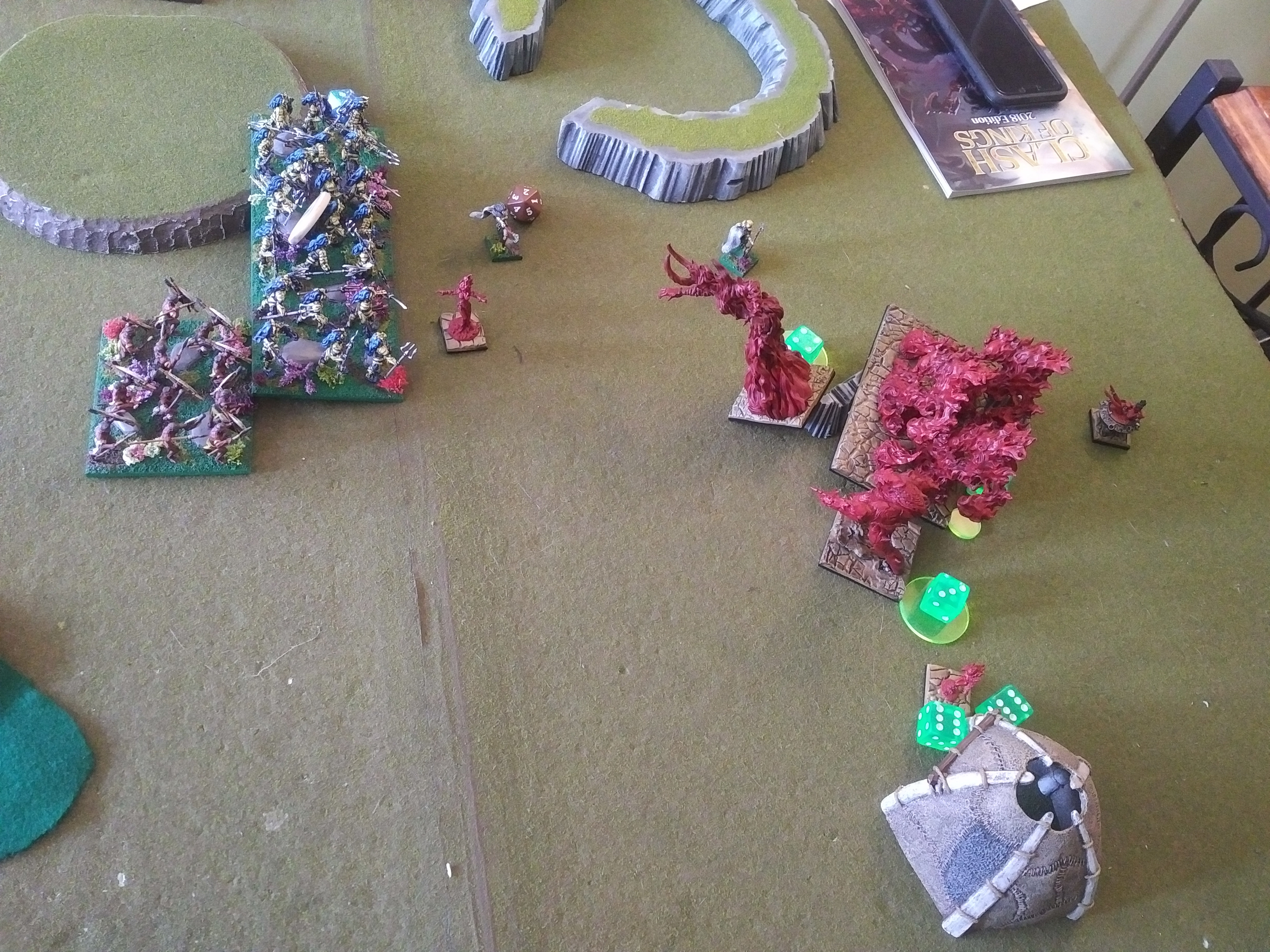 Both Nature units turn to ash under the fiery ministrations. 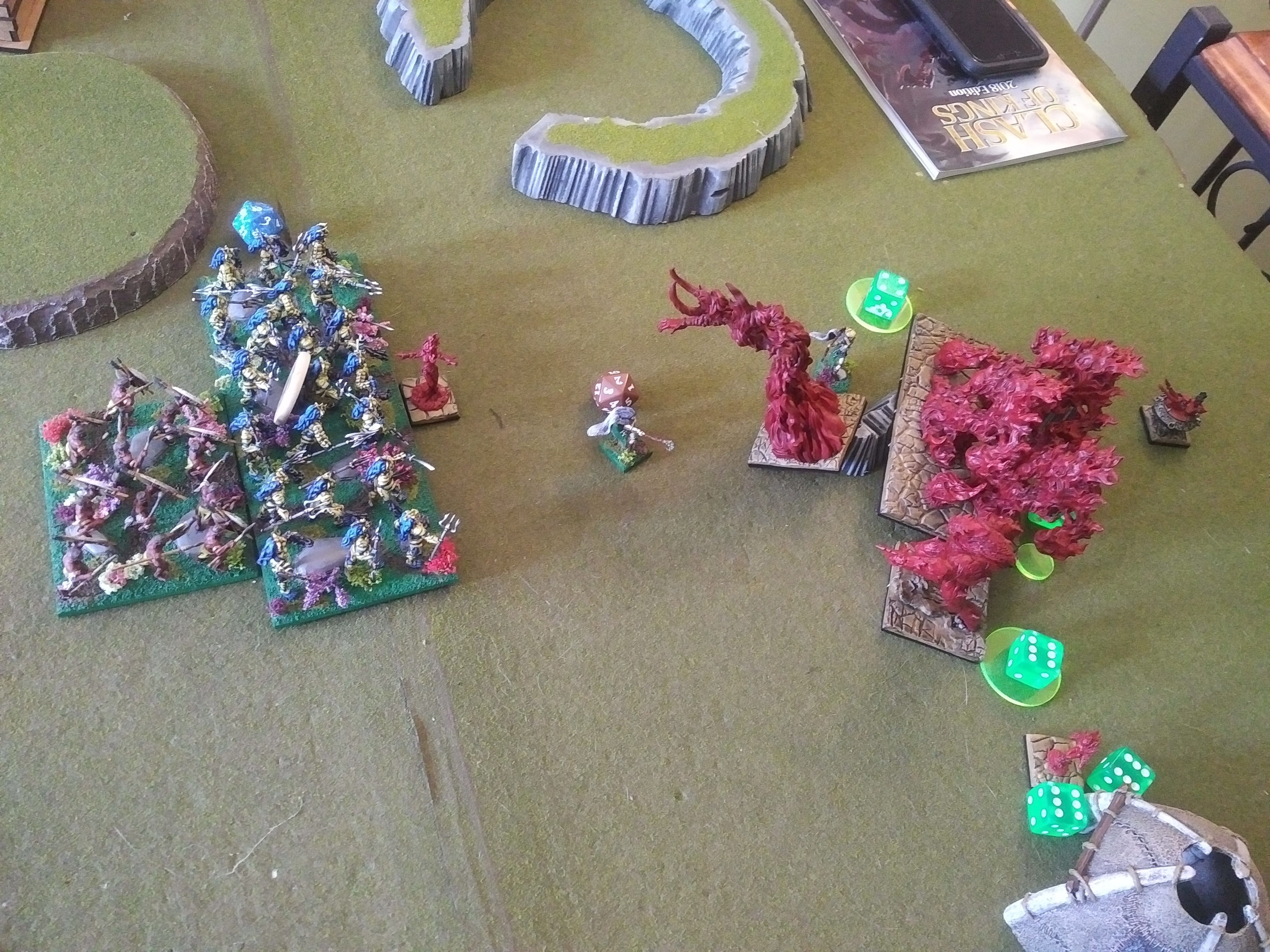 The waiting Mage-Priest is swarmed by Naiads and a Druid charges Agnes in hopes of disabling her death ray (she fails), and the other Druid Curses the CLOFD for 3 damage (9 total), but no other result. Happily the Priest takes only 3 damage and holds the Nature line back (though shes wavered). 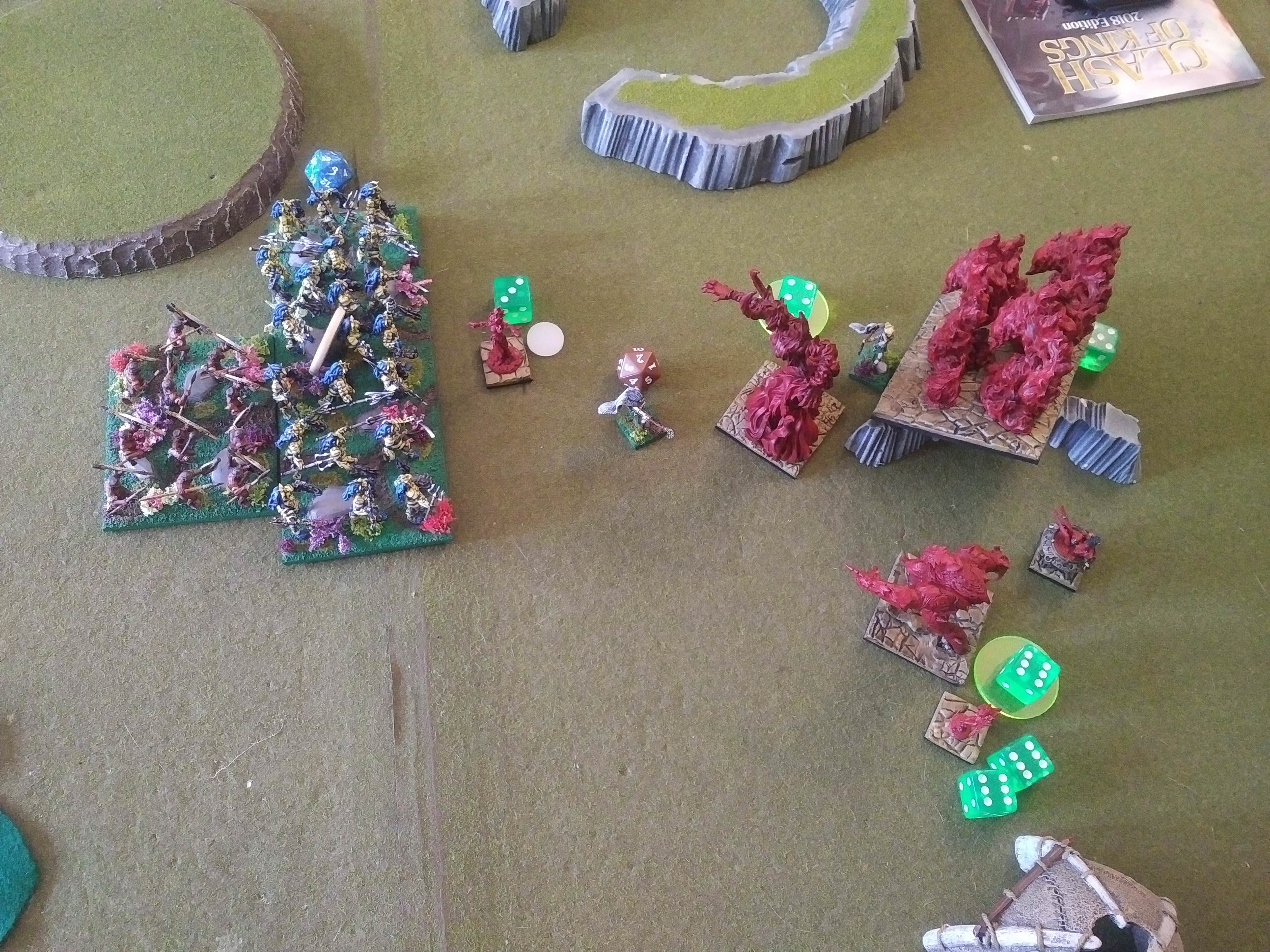 Sallies Turn 6 sees that upstart Druid charged by Fire Elementals (over the obstacle woooo) and engulfed in flaming fists, then a lot of powering up short range weaponry. Between Agnes death ray, the CLOFDs bane-chanted gore cannon and the little Priests fireball, the Naiads go up to 14 damage . . . and nothing. In retrospect that did mean the Hunters werent unleashed, which is a thing. 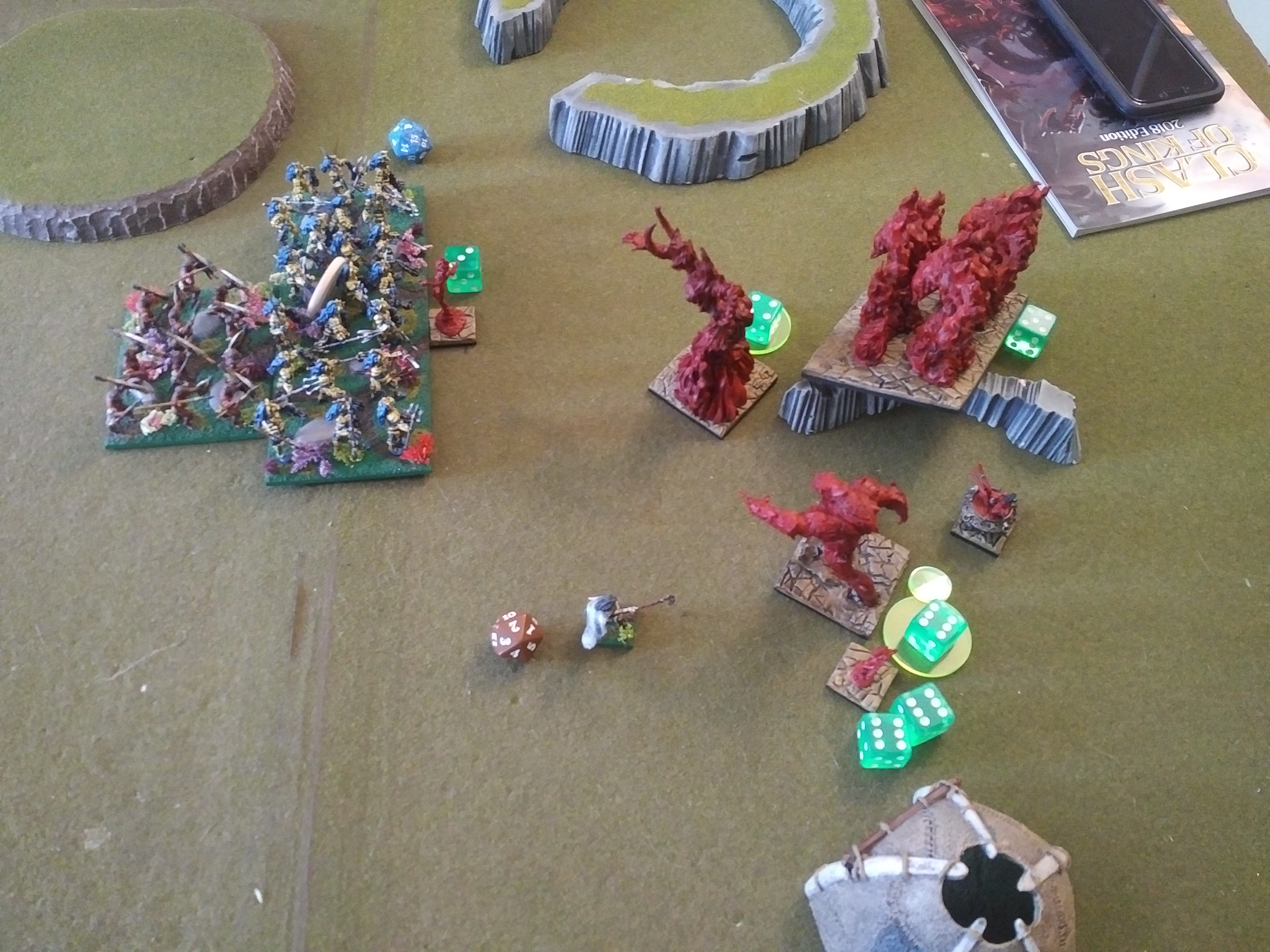 Natures potentially final play is to hit the Mage-Priest again and try to Alchemist Curse the CLOFD. The Priest caves under the pressure and the Naiads roll forward, however the Druid can only waver the CLOFD on 9 total damage.

As played, if we had remembered the central objective this would have been a draw, but then again we would have played more centrally as well, so who knows. Fun bloody game with some poor decisions on my part that cost me momentum, however in the end big zappy token-hugging monsters pulled it out. The Lute and Martyrs Prayer were both cool to have, happy to have a little dice manipulation instead of just complaining about 4+ to hit (5+ against Naiad OMF), and 12 wounds worth of healing over a few turns from one mini is pretty cool. I got a little cagey about the deer coming to eat that Priest late game, although I also multiple times this game didnt really rely on ranged parts of my army to protect other parts of it. What can I say, I just dont trust dice