We gathered together a solid handful of the club together for some Sunday scrums. Nature vs Herd on the far table, as I took on Dwarfs. Coincidentally both tables diced up Scenario 11: Take & Hold!

Fun Fact: Up until 30 min before this match I thought I was bringing my rats back – nope! Bloodfire cant be stopped!

Im having trouble building 2000 point lists with this army, which I suppose shows the growing depth of my red fire thing collection. Dropped the second surge – which Ive never taken advantage of – to free up some points. Was originally going to try Martyrs Prayer out, but chickened out and went with the old Heal (9) setup. Really left the lil Priest feeling sort of underutilized, so next time Imma get my Martyr on for real.

Oh right: Agnes is back \m/

Our clubs fearless leader tooled his previous 18 drop Dwarf list (!) down into this more compact, COK-ed up version, complete with double updated Behemoths and a shiny formation! He had his doubts about no shooting beyond 12, but as thats basically the name of my game we were well matched at least.

As noted, we diced up Take & Hold (COK18), another new mission for me. Markers went down center and clustered on one flank, ensuring wed by rocking a 4×4 board at most. 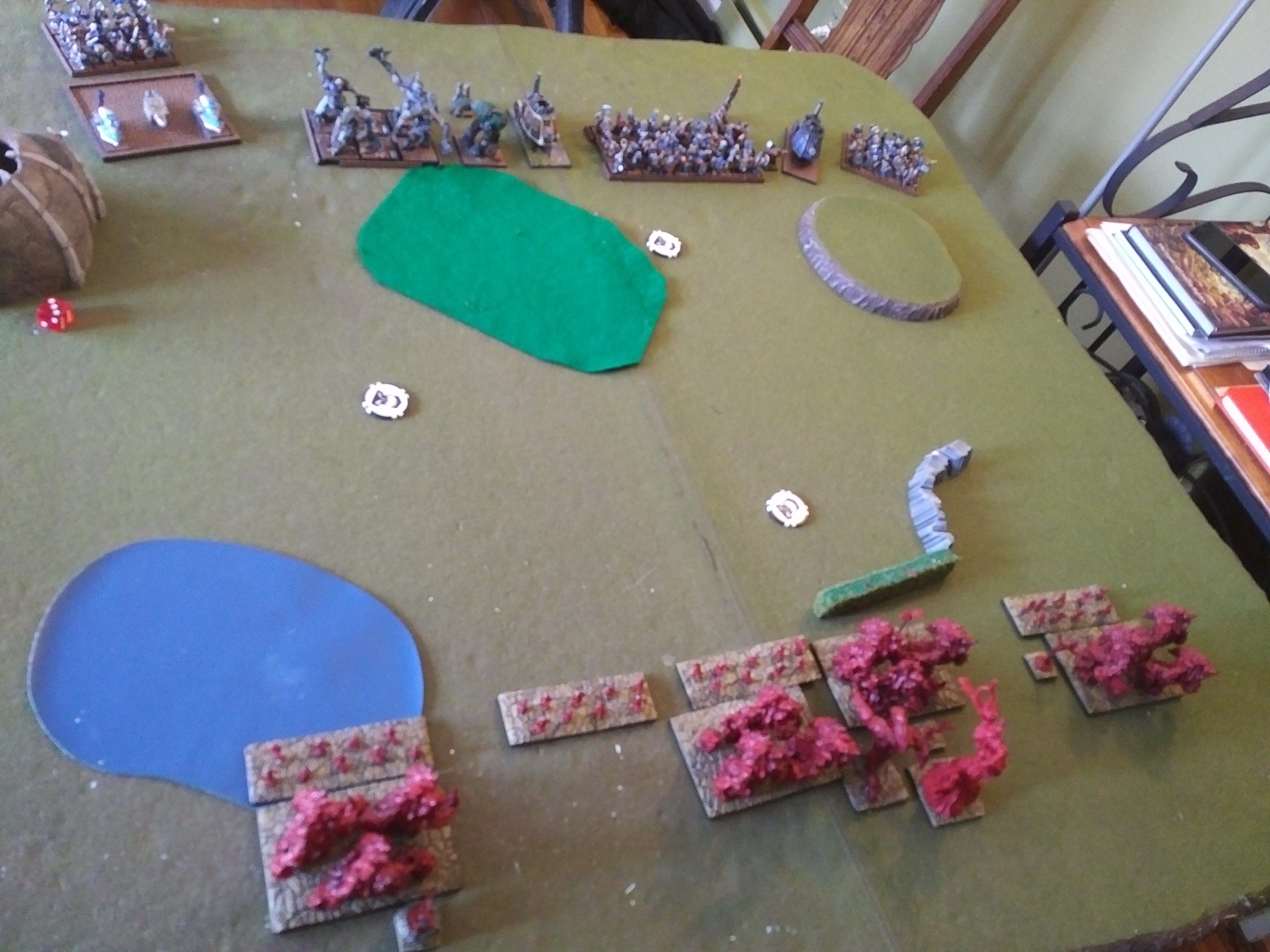 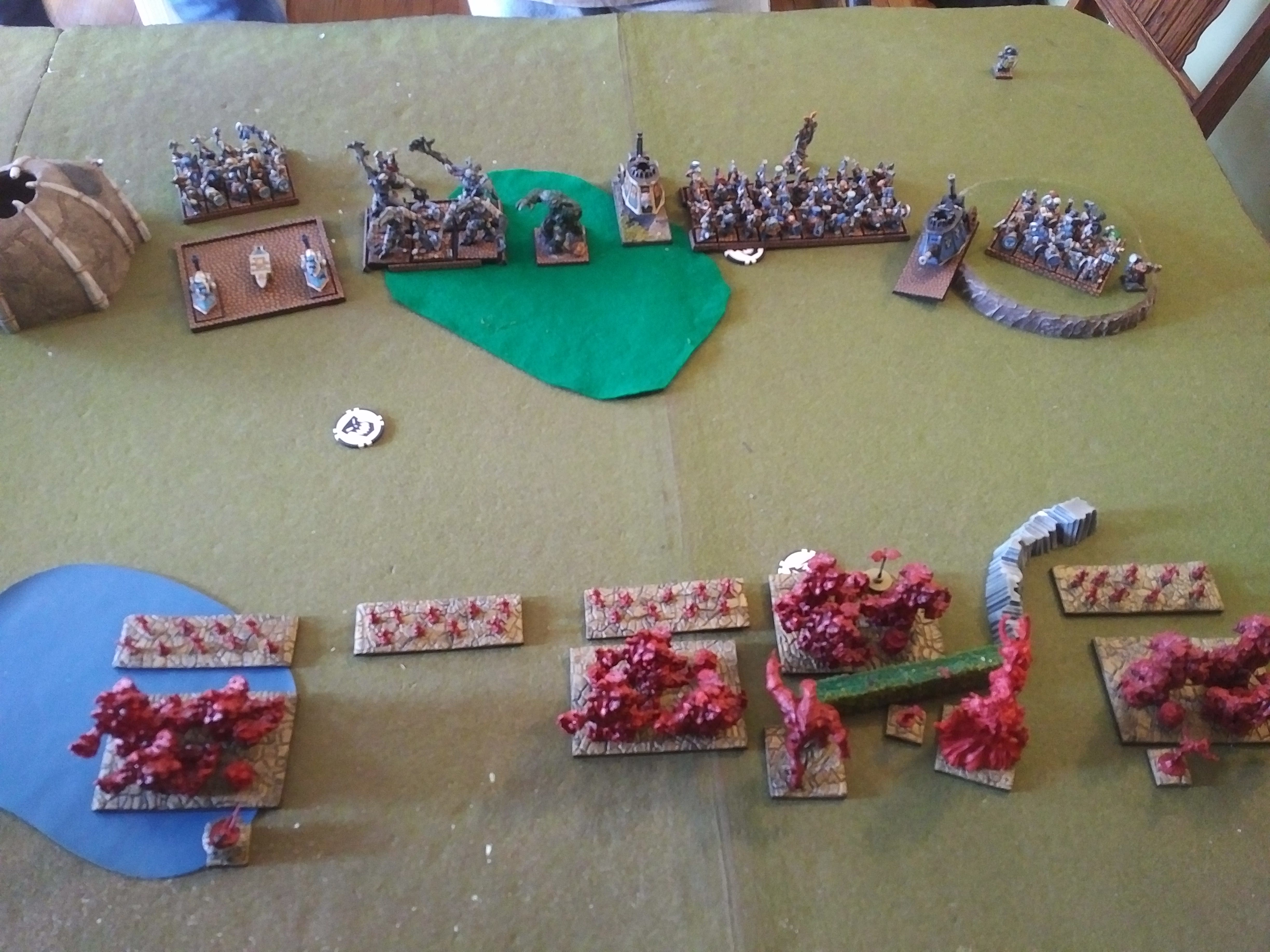 Dwarfs grab the initiative and waddle forward across the line. Bloodfire shambles up in similar fashion, except for Ember Sprites on the flanks gaining range to some stunties. Brocks take no damage but the right Ironclads soak a couple wounds. 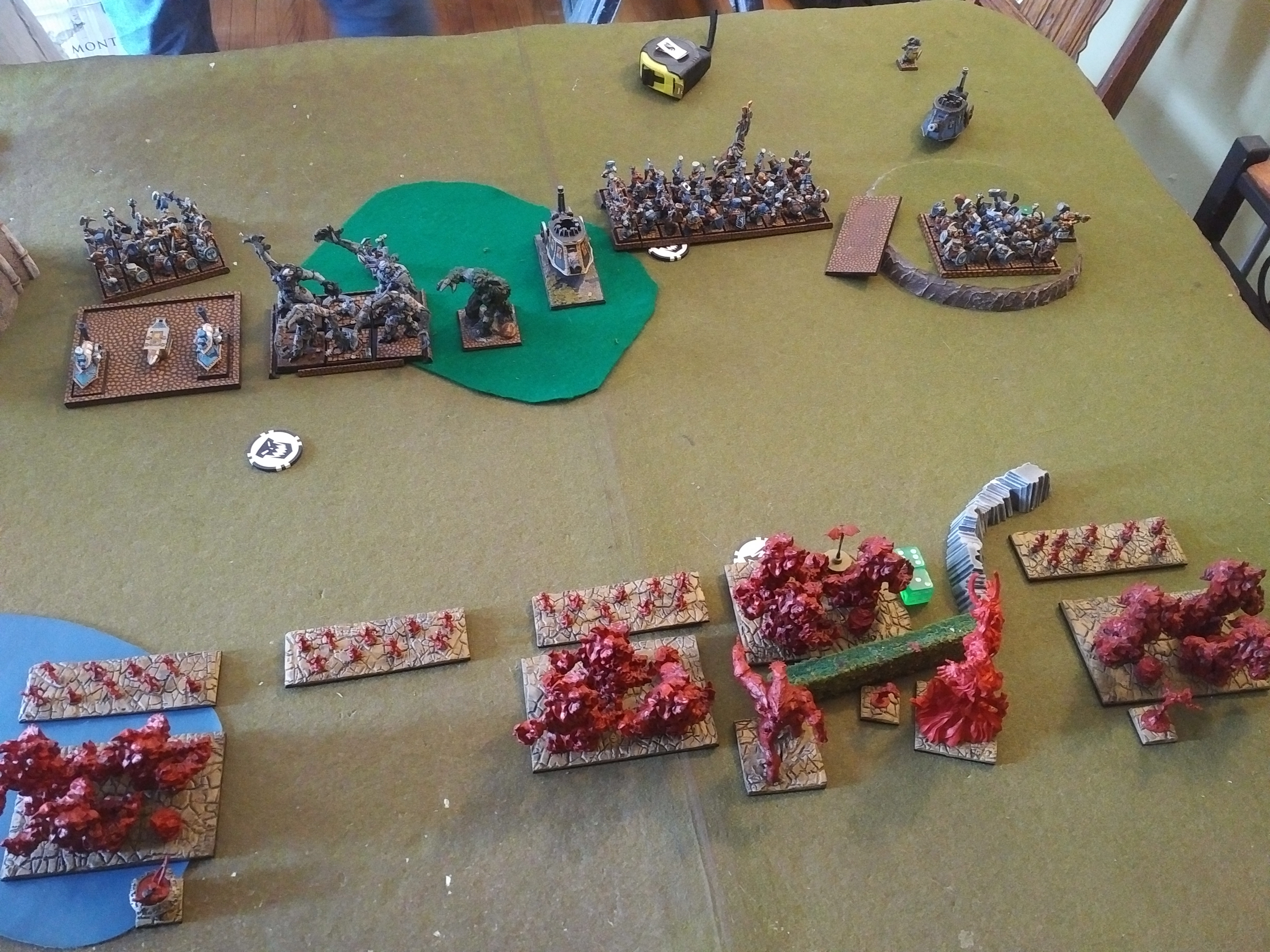 The slightly faster Dwarf flank is brought into charge range, while Behemoths unload into the exposed Fire Elemental horde. 9 damage is no joke but the BOTG keeps them safe (barely!) 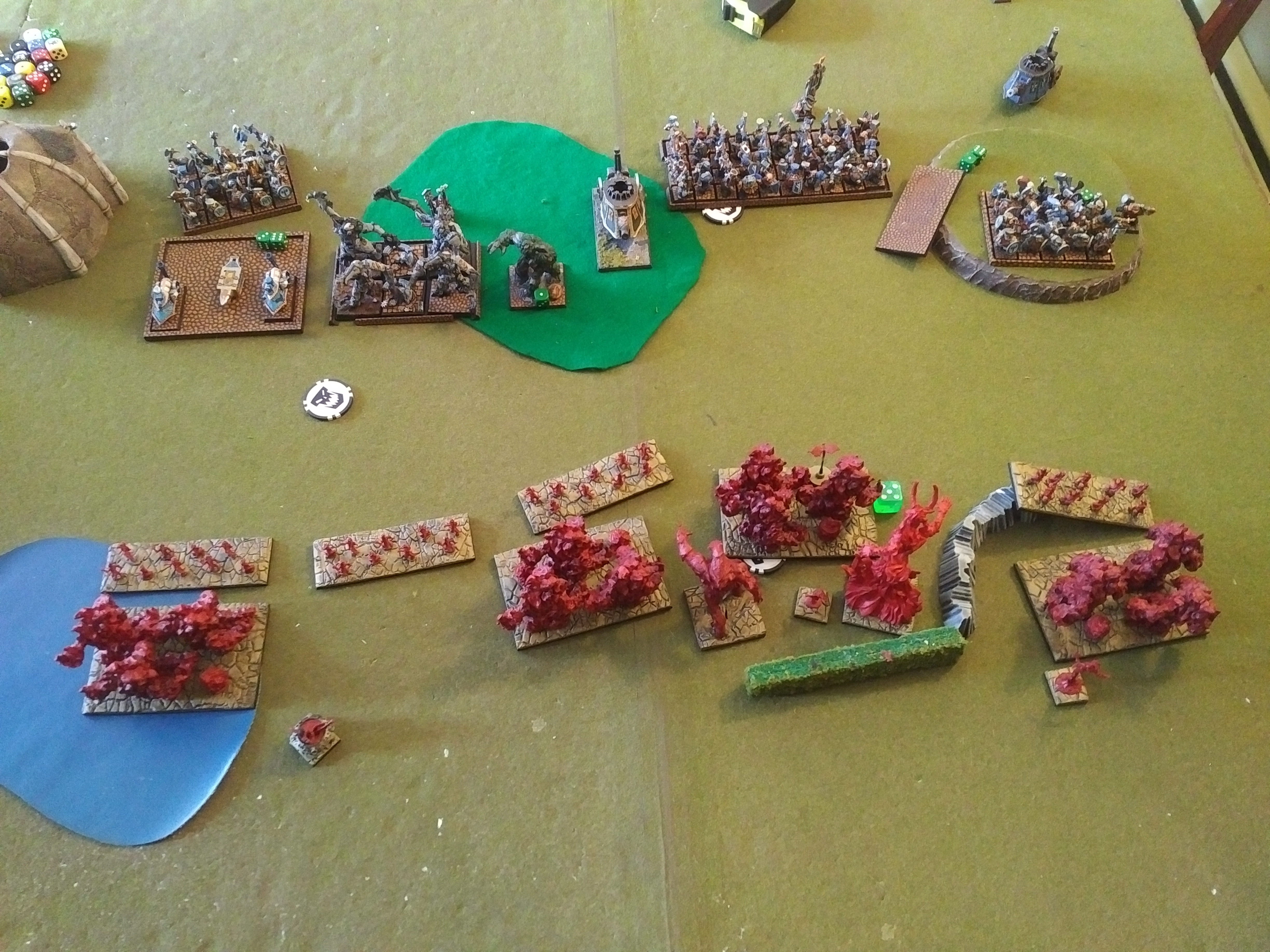 Bloodfire enters the danger zone, advancing Sprites into the teeth of the Dwarf hitty flank. The Priests pull 4 damage off the exposed Fire horde, as the CLOFD splashes a single wound on the Greater Earth Elemental and Ember Sprites sear 9 wounds into the Brocks and 2 more into the right Ironclad. Then Agnes hits the right Behemoth with her heat ray, doing a stunning 7 damage out of 12 shots. Rout tests are fine across the board but the Dwarf general is visibly shook 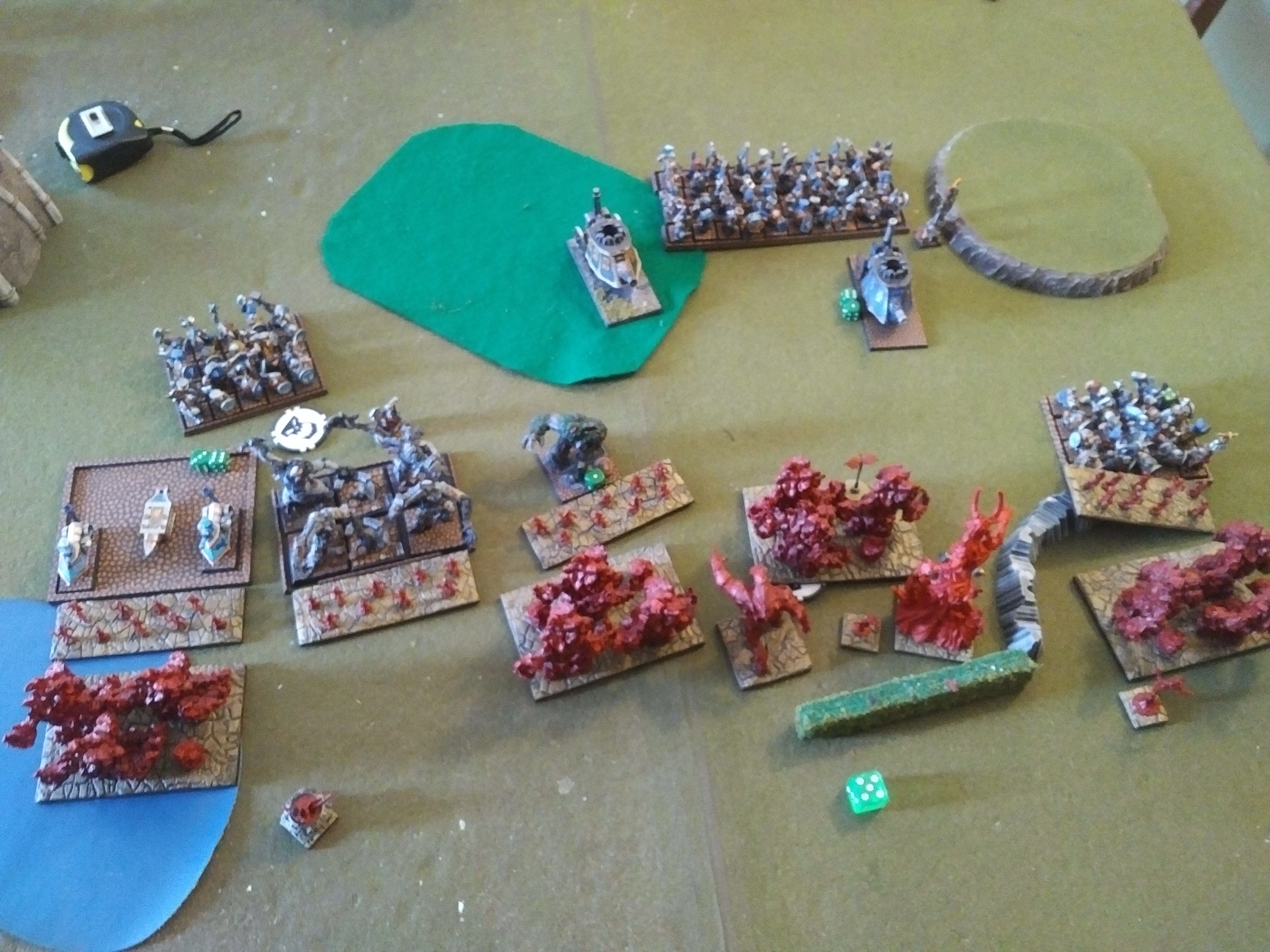 Turn 3, which means time for fighting (and scoring)! The left Sprites are charged by their dancing partners, while the right Ironclad at the double to jam the right flank and the King flies into Agnes to shut down her laser whatever the cost. 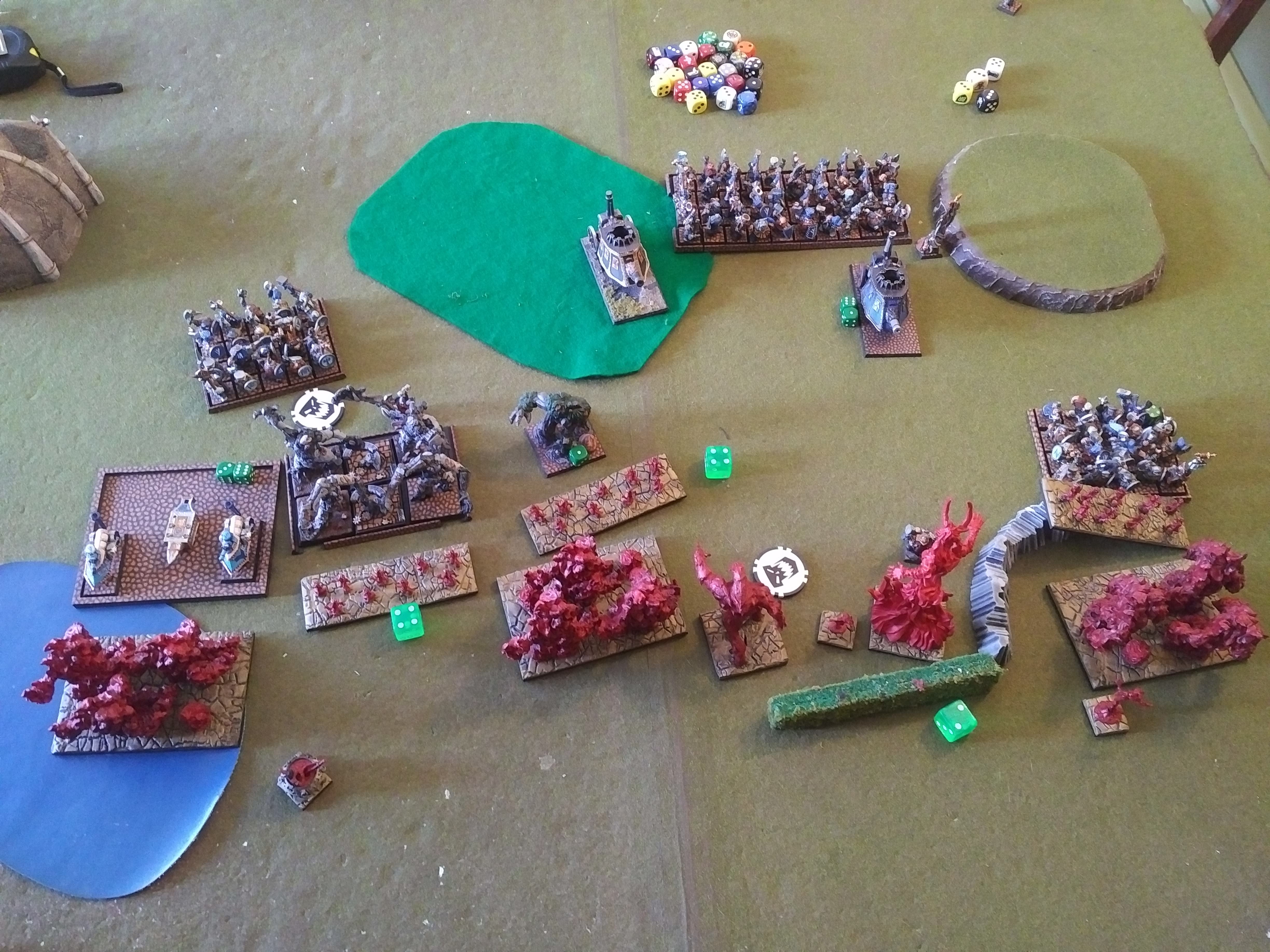 Another double dose of Behemoth cannon finishes off that wounded Fire horde, with an assist from the ASBs diadem, then onto combat. The Brocks evaporate their Sprites, however the Earth Elementals and Greater buddy both manage 4 damage against their chaff and cant waver either. And the King bops Agnes for 2 wounds, officially drawing her ire. 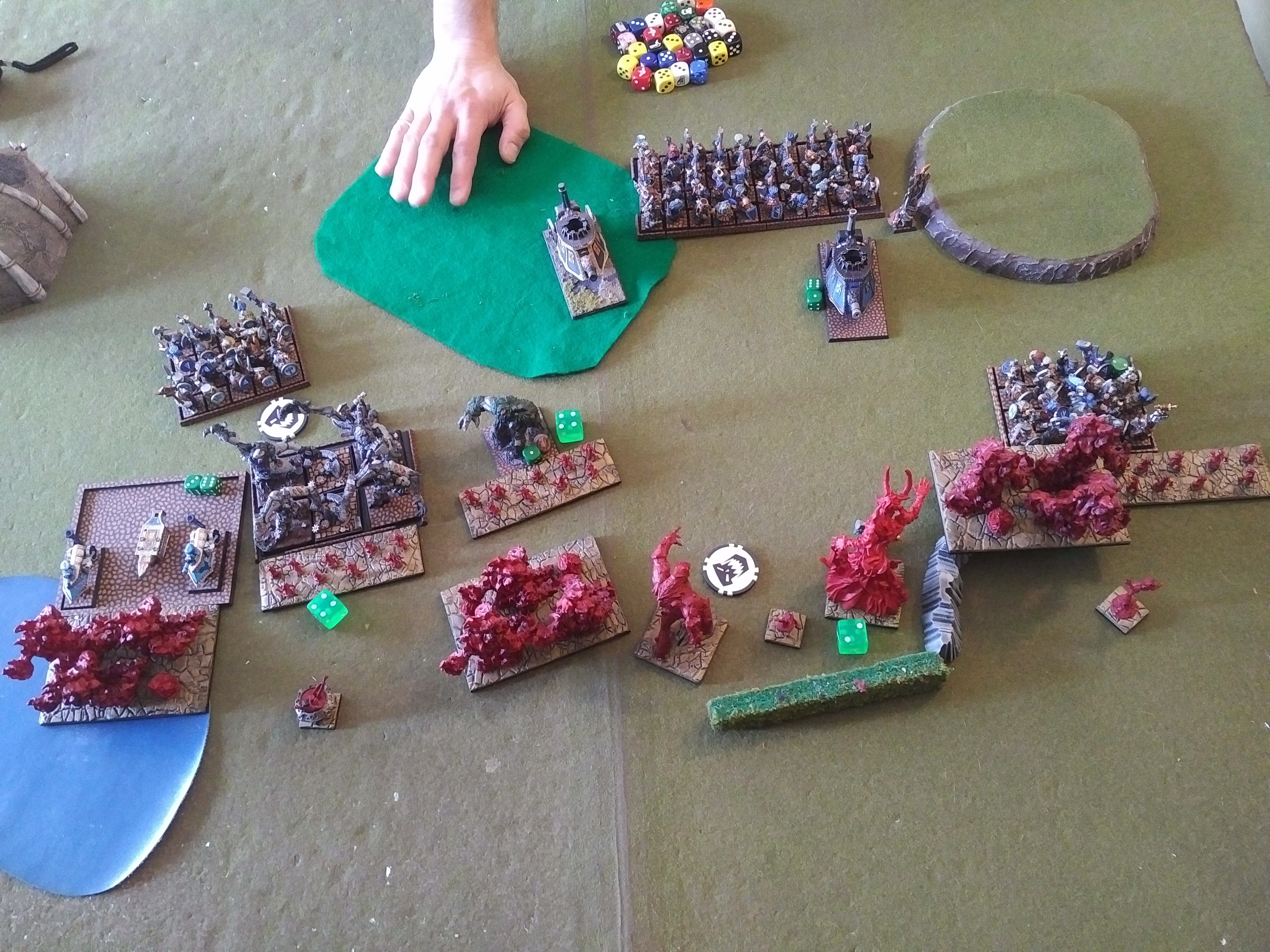 The Bloodfire Supreme Bloodstoker thinks for a very long time about surge options . . . and there basically arent any, these Sprites have seriously gummed things up. We go with obvious charges: Fire horde into waiting Brocks, both Sprites into Earth Bros, Agnes into King, Fire horde + Sprites into Ironclad. 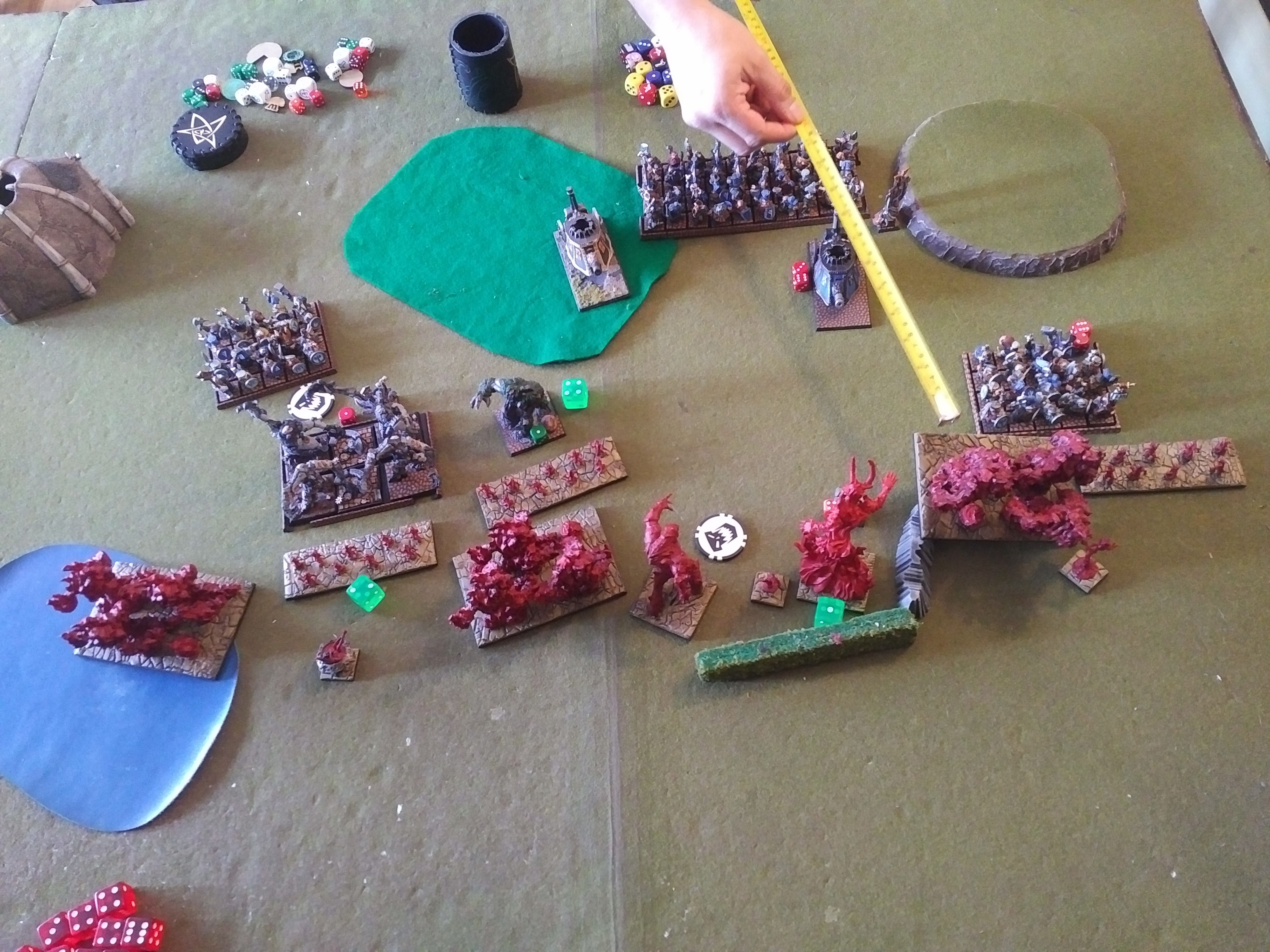 The Herald grudgingly heals some Sprites for a couple wounds, and a Priest pulls one off of Agnes. The other Priest combines her fireball with the CLOFDs gore cannon to do 2 more damage to the wounded Behemoth, bringing it to 9 but no lucky rout. In combat, the left Fire horde obliterates the wounded Brocks, Sprites bounce off of Earth Bros (1 damage to horde, nothing to Greater), Agnes slams the King for 4 damage, and the Fire horde + Sprites combo only gets the Ironclad to 9 but fail the easy rout. 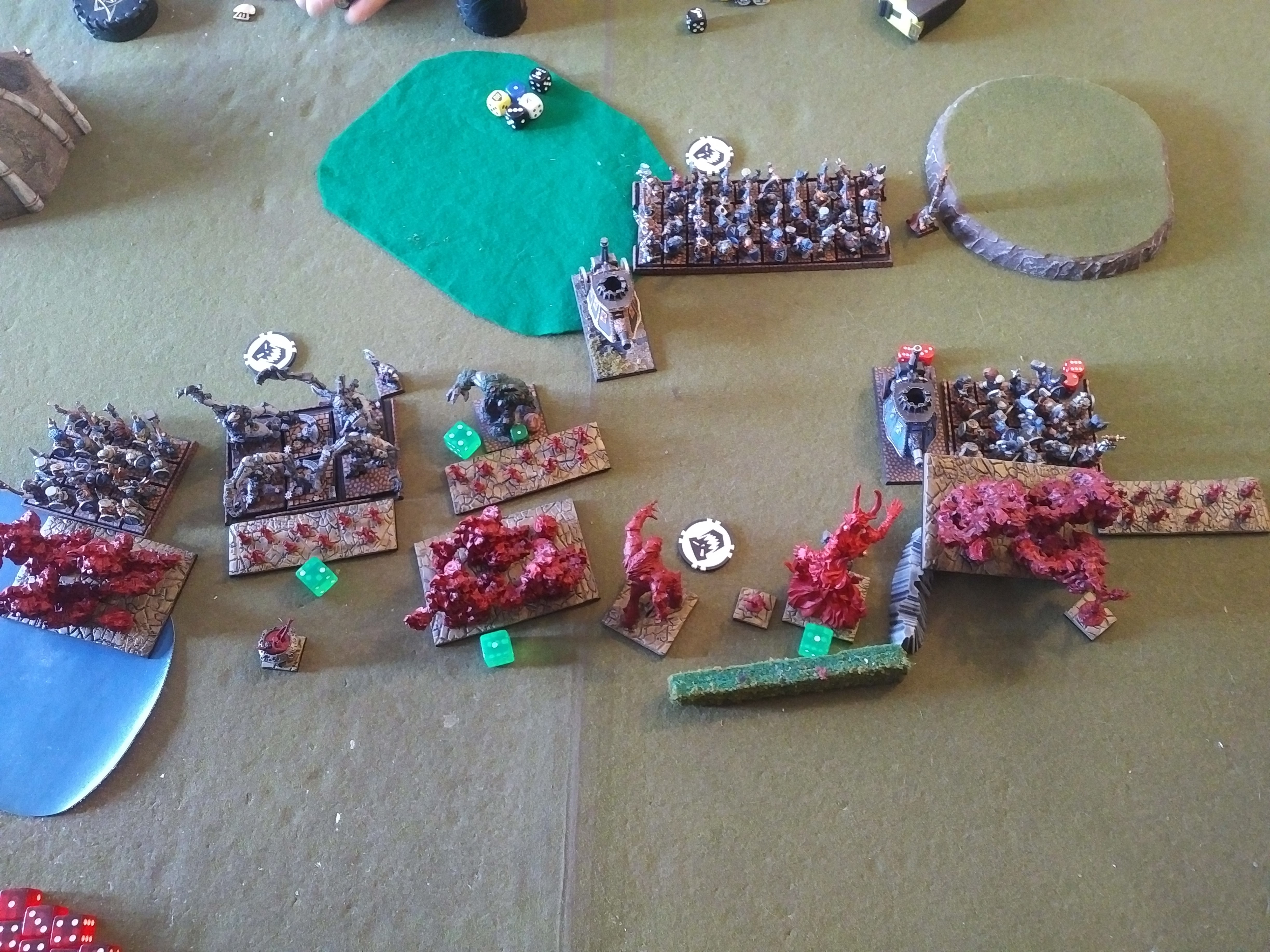 Dwarfs grind on, sending left Ironclad into the Fire horde (hindered by the puddle theyre busily evaporating), Earth Bros back into annoying Sprites, King back into Agnes to keep her distracted, and wounded Behemoth and smoldering Ironclad into the right Fire horde. The other Behemoth unloads into the little healing Priest for no damage (!),the Stone Priest life drains a Fire horde for 1, healing up the Earth horde with that pip, and the ASB wavers the rightmost Sprites with his diadem. 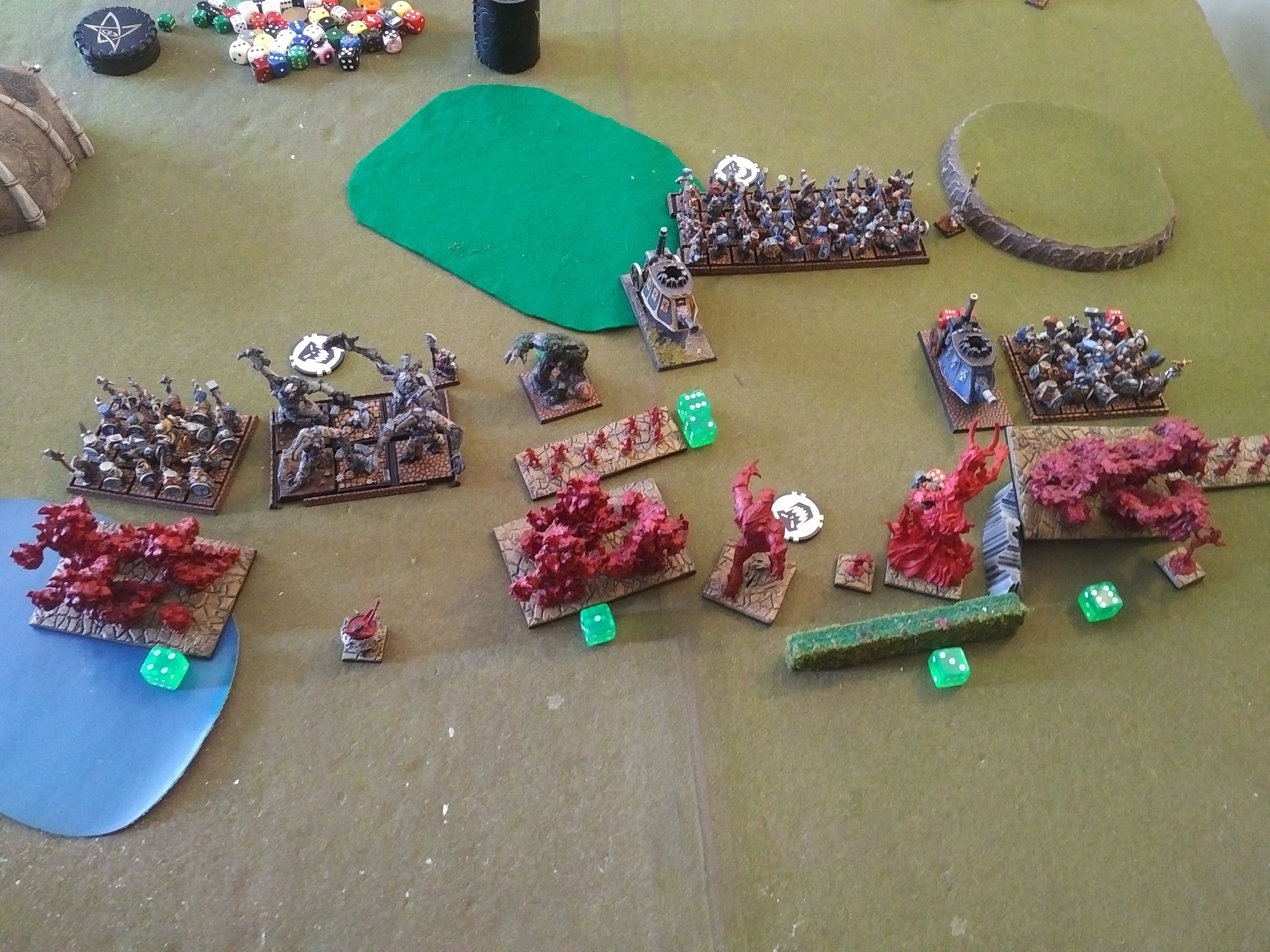 Combats dont really go as hoped: left Fire horde takes 4 damage but doesnt care, the Earth horde scatters their Sprites but the Greater Earth double ones on his, leaving them disordered but unwavered. The King boops Agnes again for 2 damage, as the Behemoth + Ironclad only manage 6 wounds on their Fire horde, which isnt enough to force a rout through. 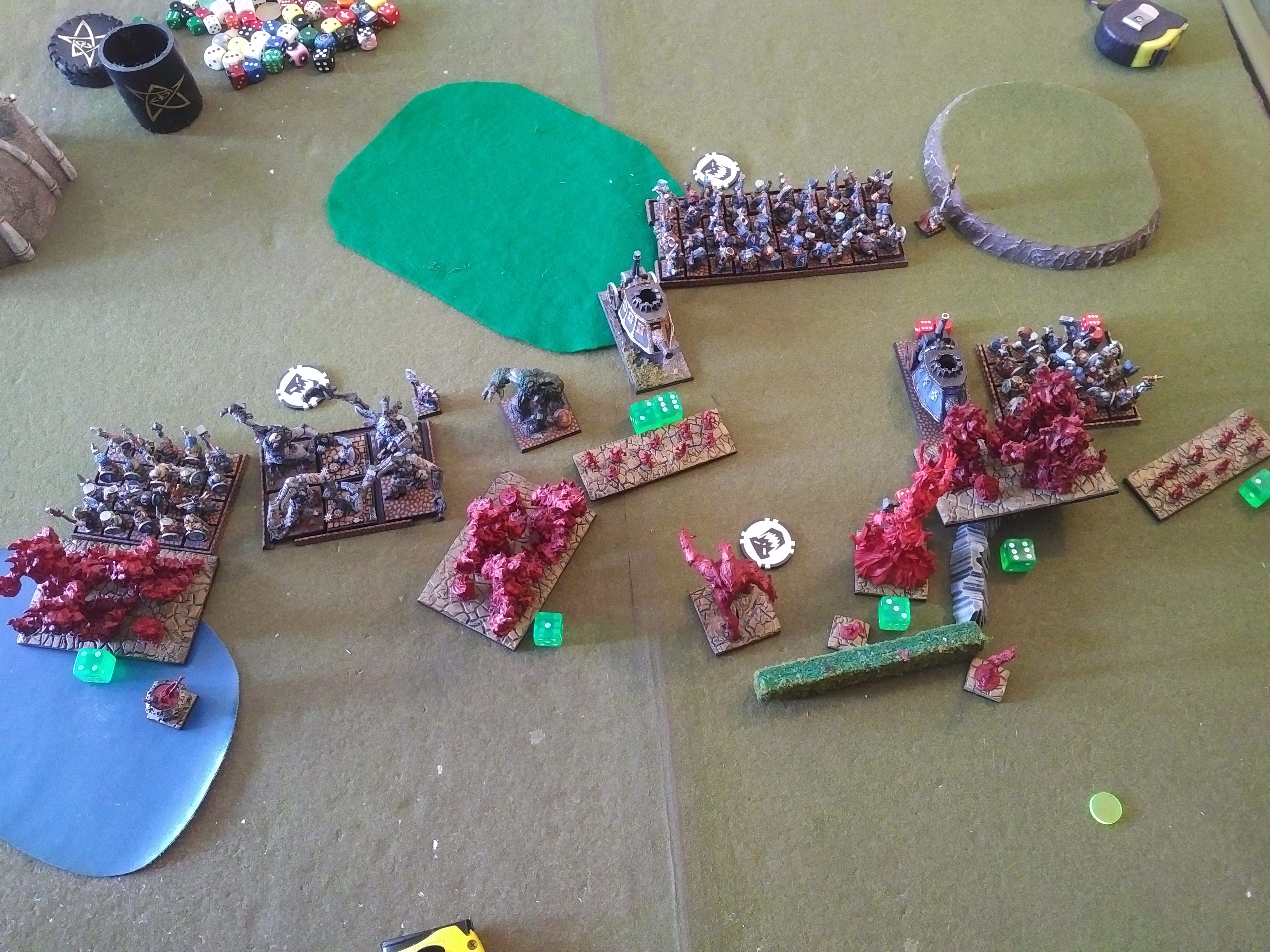 Bloodfire lines up to deliver some serious jabs to the Dwarfs in preparation for a late game points bonanza. Fire hordes jump on the left Ironclad and wounded Behemoth, as the third horde prepares to surge into the flank of the Earth Elementals (who couldnt protect both flanks and chose the one that required the attention of a Priest, pulling resources from the right at least). Agnes flames up and descends once more upon the Dwarven King. 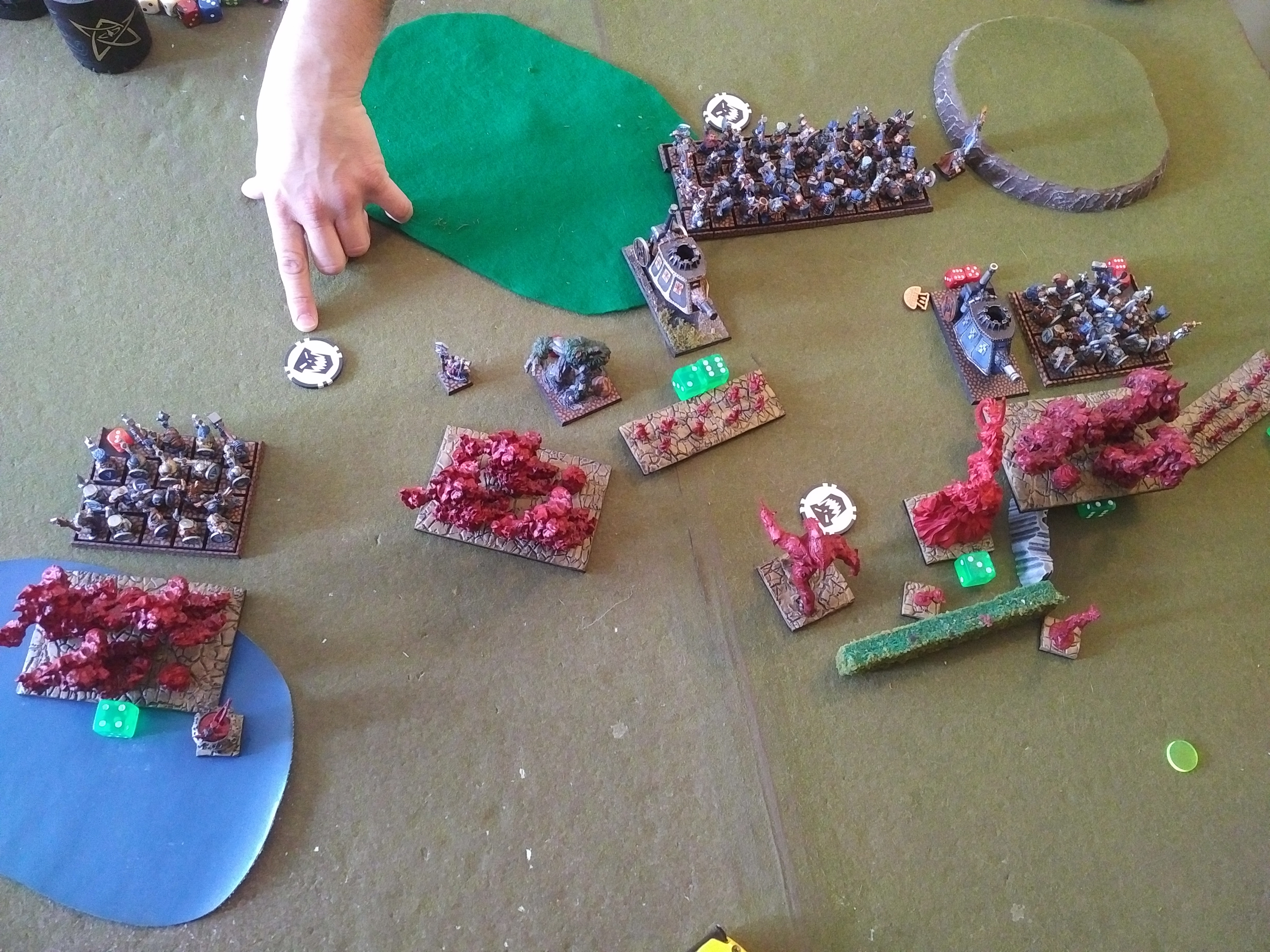 The CLOFD forgets that he was supposed to snipe the Stone Priest (. . .) and instead tags a couple wounds onto the Greater Earth Elemental (3 total). Some healing happens (the surging horde is topped off and the right horde goes down to 5) and then the other Priest pulls off the 1 surge needed to propel the Fire horde into the flank of the Earth horde.

Things get off to a slow start in the combat phase. The right Fire horde does 2 wounds to their Behemoth, wavering it, and the left Fire horde tickles 4 into their Ironclad, doing nothing. Agnes swings next, obliterating the King with another 4-5 damage, and that momentum carries into the flanking Fire horde, who roll like the molten blood elementals they are, gouging 15 wounds into the Earth Elementals! The horde dissolves under such a furious display. 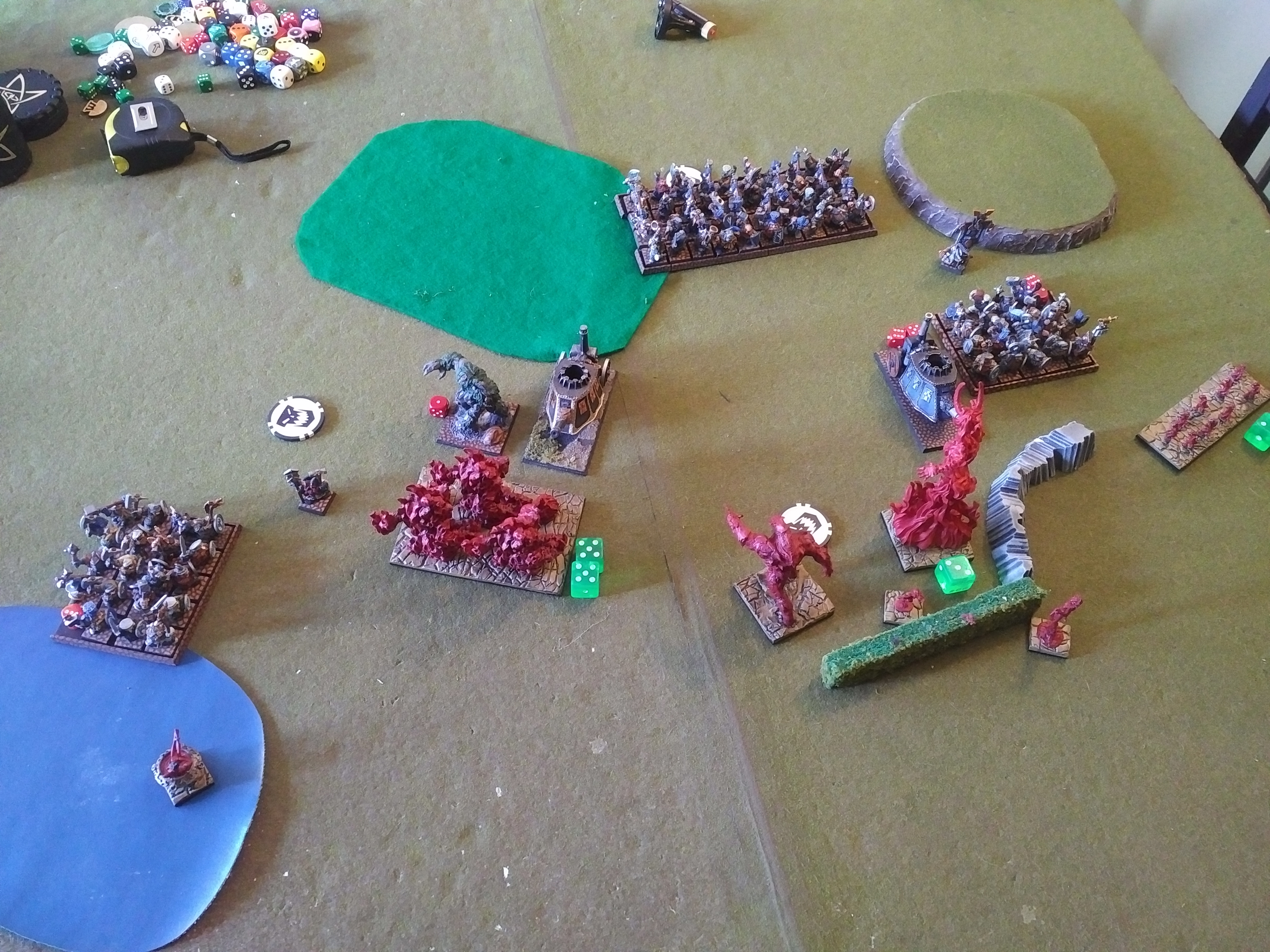 Dwarfs return the pain in Turn 5. Greater Earth Elemental + Steel Behemoth thunder into the marauding Fire horde, laying on the hurt but not breaking the elementals. Which is not the case to either flank: left Ironclads swing hard and break their Fire horde on the countercharge, as the right Ironclads team up with the smoking Behemoth to dispel theirs. The central Sprites are also scattered by the ASBs diadem. 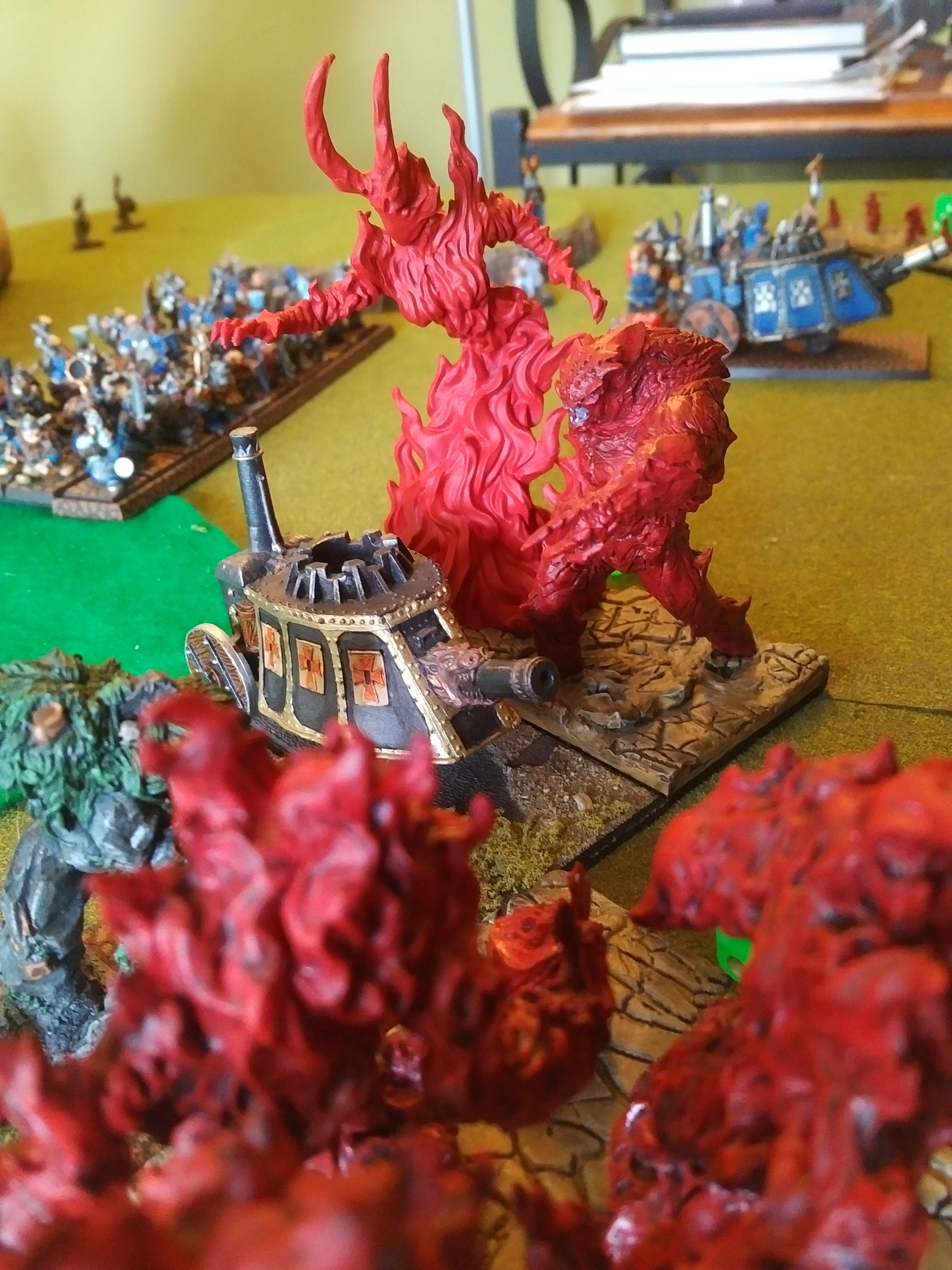 Monster mash! Agnes and the CLOFD see an opening and storm into the fresh Behemoths flank. 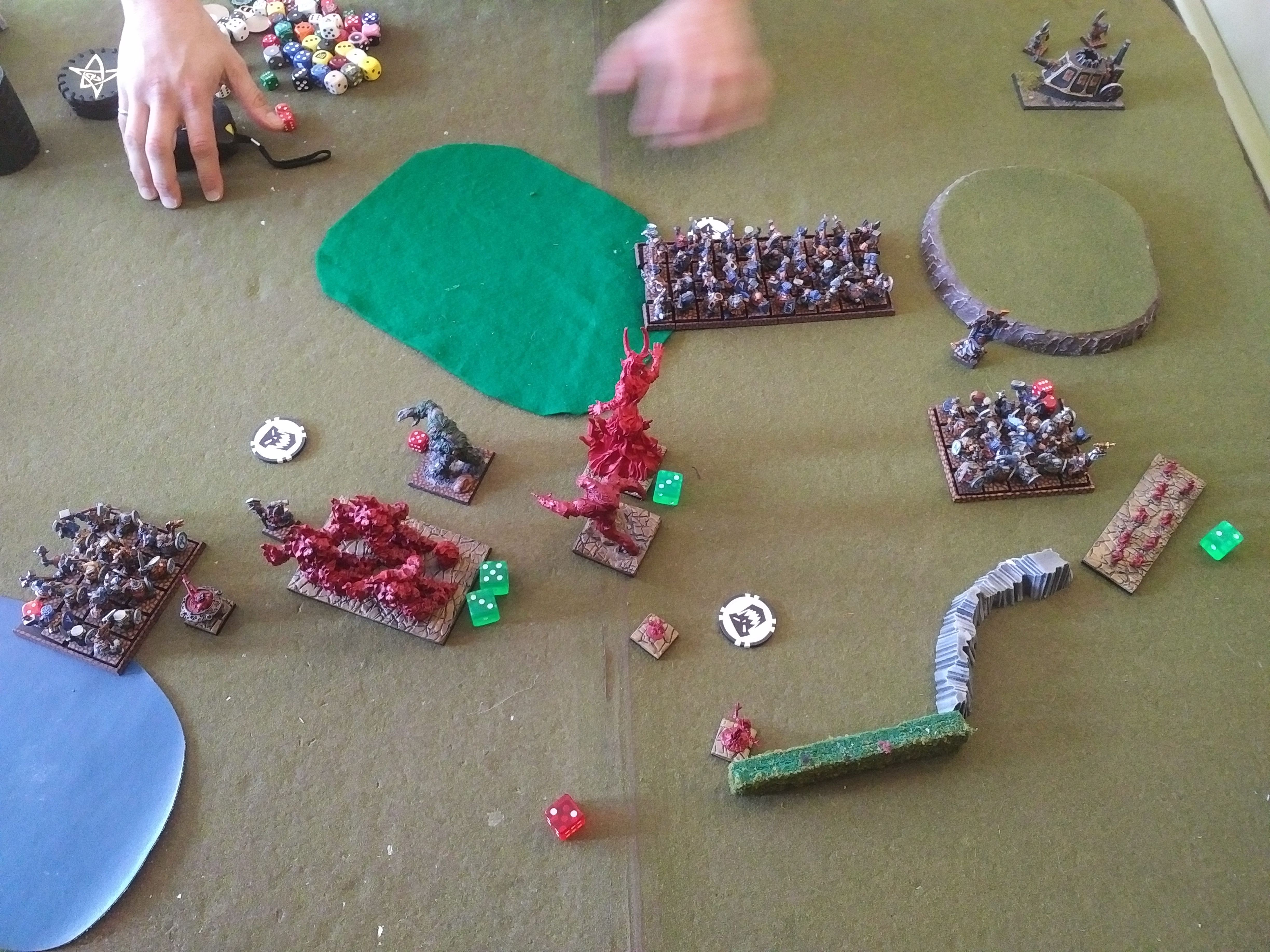 Its super effective! The Behemoth takes 9 wounds from both of the big beasties, detonating spectacularly on 18 damage. The other Behemoth meets a scalding death as well, pummeled by 20 fireballs from the Mage-Priests and finally succumbing to all the abuse. Less epicly, the last Fire horde beats 4 wounds into the Greater Earth (who doesnt care), the last of the Sprites cant wound the right Ironclad for a lucky rout test, and the Herald blocks the left Ironclad from flanking the Fire horde (whom she also heals for a couple points). After all the smashing is done, the CLOFD backs up 1 into range of a token, and with a metric ton of deliberation, Agnes turns to face the Bulwarkers, assuming they want to leave the safety of their token. 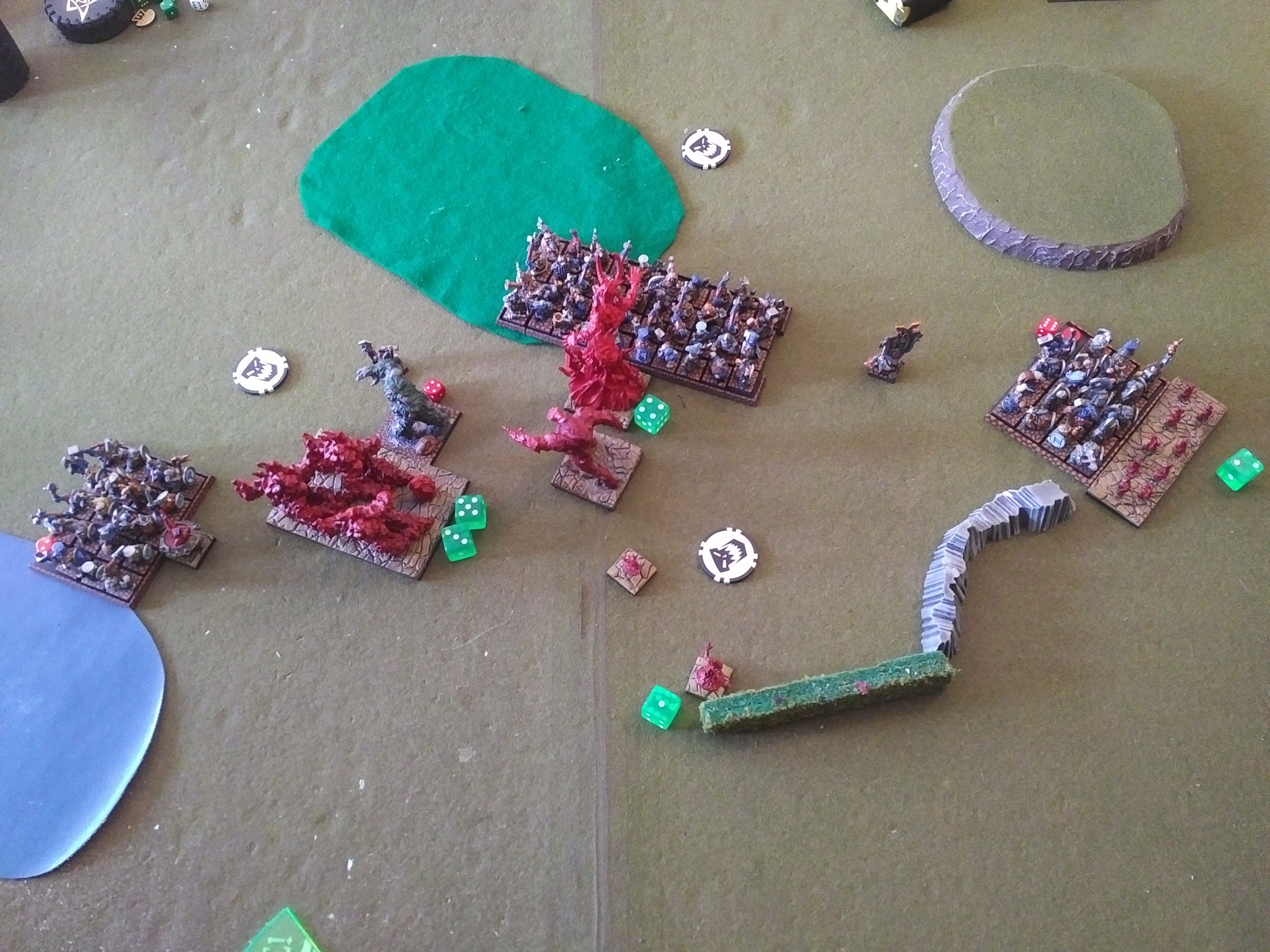 Dwarf Turn 6 and the stunties go for it! Ironclads charge the Herald and Sprites respectively, while the Greater Earth Elemental decides to clean up the Fire horde rather than surging into Agnes flank, leaving her to the Bulwarkers (hindered though they may be by the forest). The ASB breaths a wound on the inspiring Mage-Priest and the Stone Priest attempts a life drain, but really its going to come down to fighting. 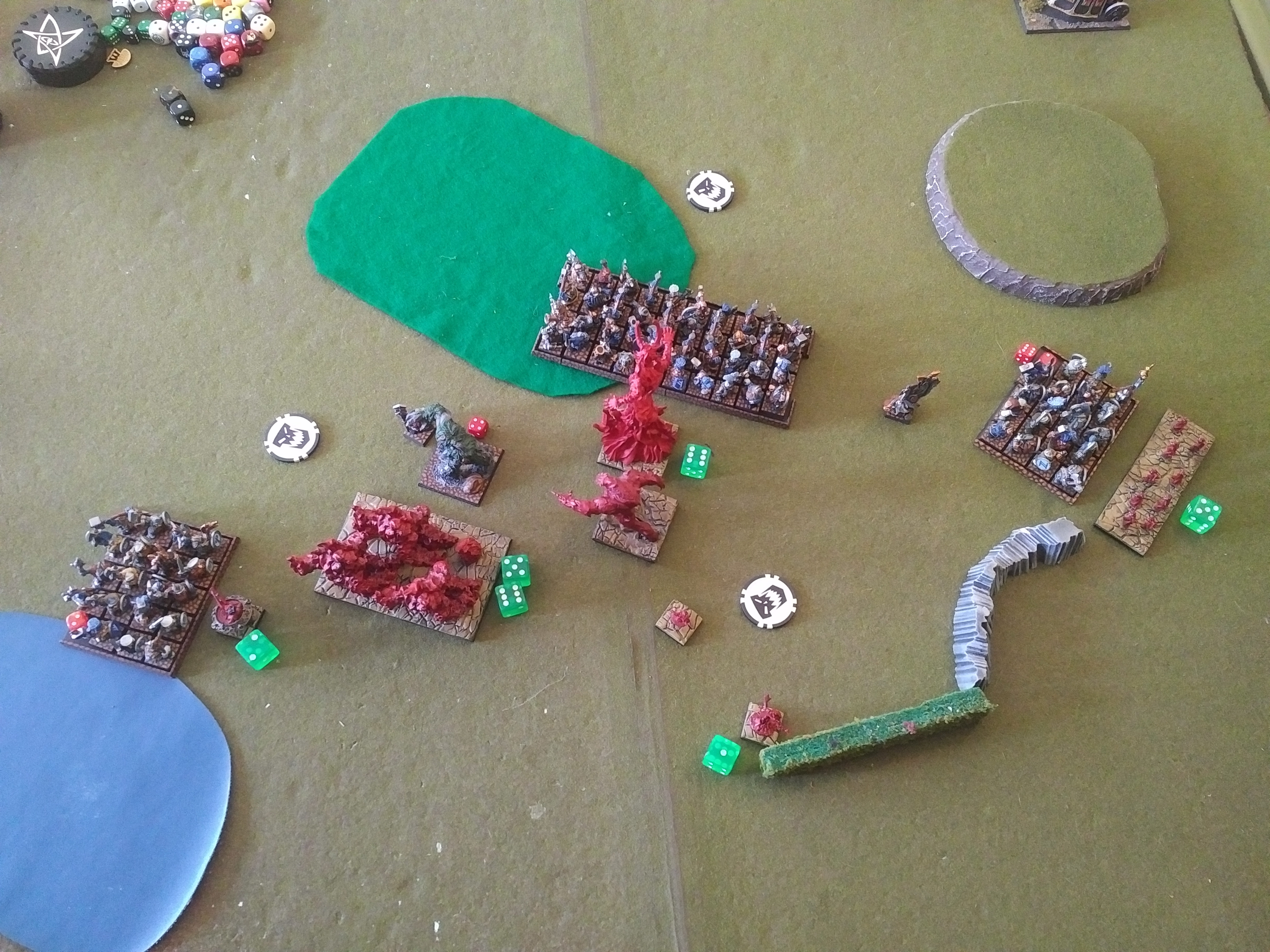 Whiiiiich is unfortunate because nothing works! The Ironclad dont even waver their targets, the Greater Earth gently bats 3 wounds into the Fire horde, and Agnes is just too damn huge for the Bulwarkers, who manage just 2 wounds. Nobody cares . . . and no Dwarf scores 😛 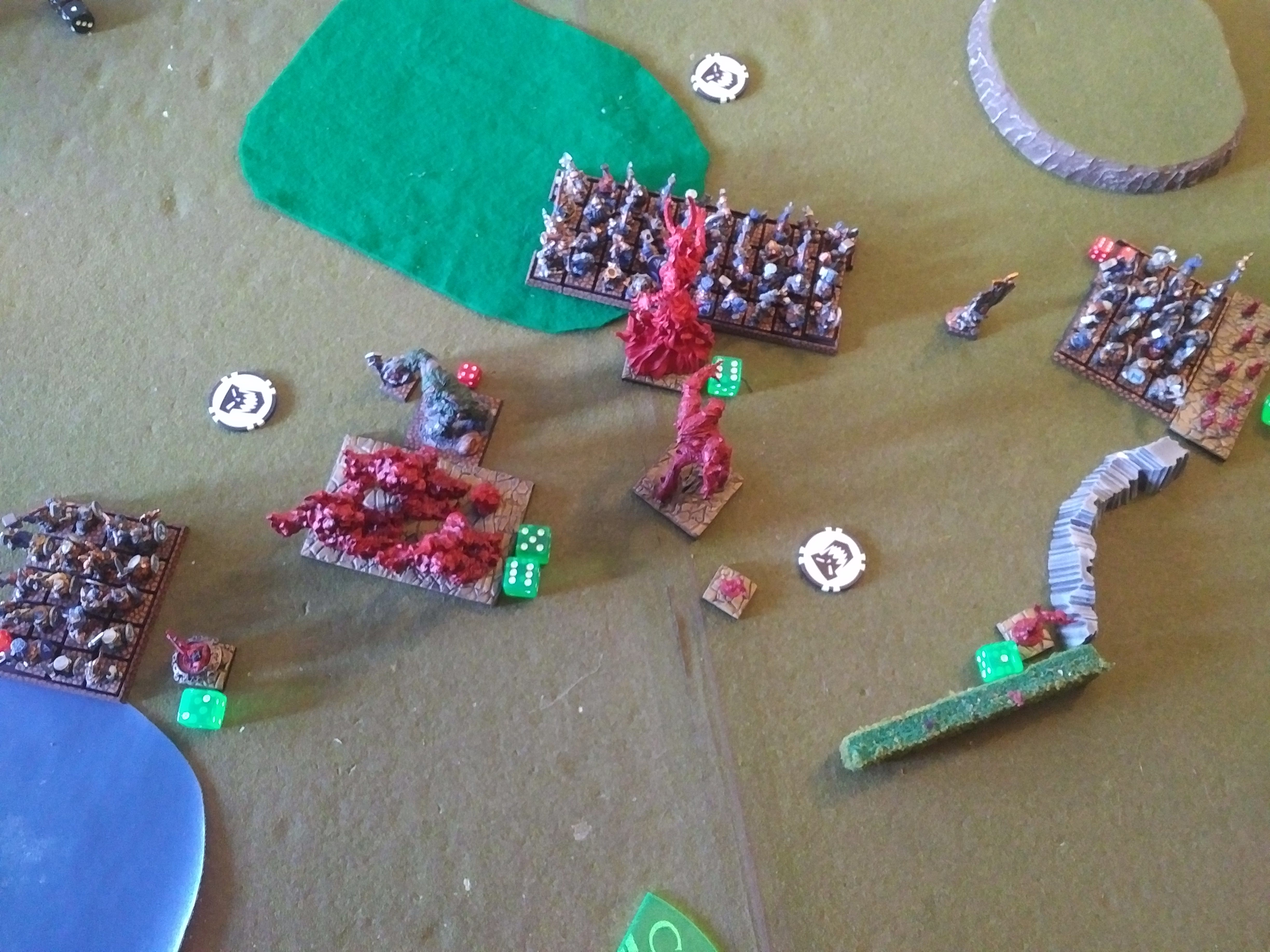 Sally Turn 6 and things are looking great for Bloodfire. Everybody countercharges, theres a brief musical interlude as the Dwarf Army Standard is fragged by the CLOFDs gore cannon (and maybe some Priest fireballs, but I have a feeling they healed Agnes or the Fire horde as the CLOFD rolled strong) and pops, then fighting happens. Stuff got wounded, stuff hung around, but only red stuff was near tokens.