Happy 2018! This Sunday the lads and I took a brief road trip to Kirwins down in Catskill, NY to meet up with some other wargamers and throwdown. We used COK18 rules because were fancy like that (and one of the writers of the game was in attendance!)

Im transitioning to a double Mage-Priest list instead of the double mounted Herald version I ran last year, I guess in hopes of more surge shenanigans? And the ability to double surge in a moment of desperation. All told probably a bad idea, but it seems like it could work. I also swapped the Ankylodon out for the new legendary fire elemental, Agnih-Bhanu! Whether or not shes worth the points, she fits the army theme and fighting style frighteningly well, so will likely stick around for a bit. Also yes, mines a she, no idea what its official gender identity is. Also Im going to call her Agnes because.

The other COK18 comp thing is the Staying Stone on the CLOFD, bringing his nerve to 16/17, hoping to avoid awkwardly wavering in a list thats mostly fearless.

My opponent hadnt played KOW in 1.5 years (!), but dipped into her pool of Dark Elves and magicked up a nice balanced list.

We diced up good old Loot and distributed the counters pretty evenly across the center line. She won first turn, loaded her crossbows and took it. 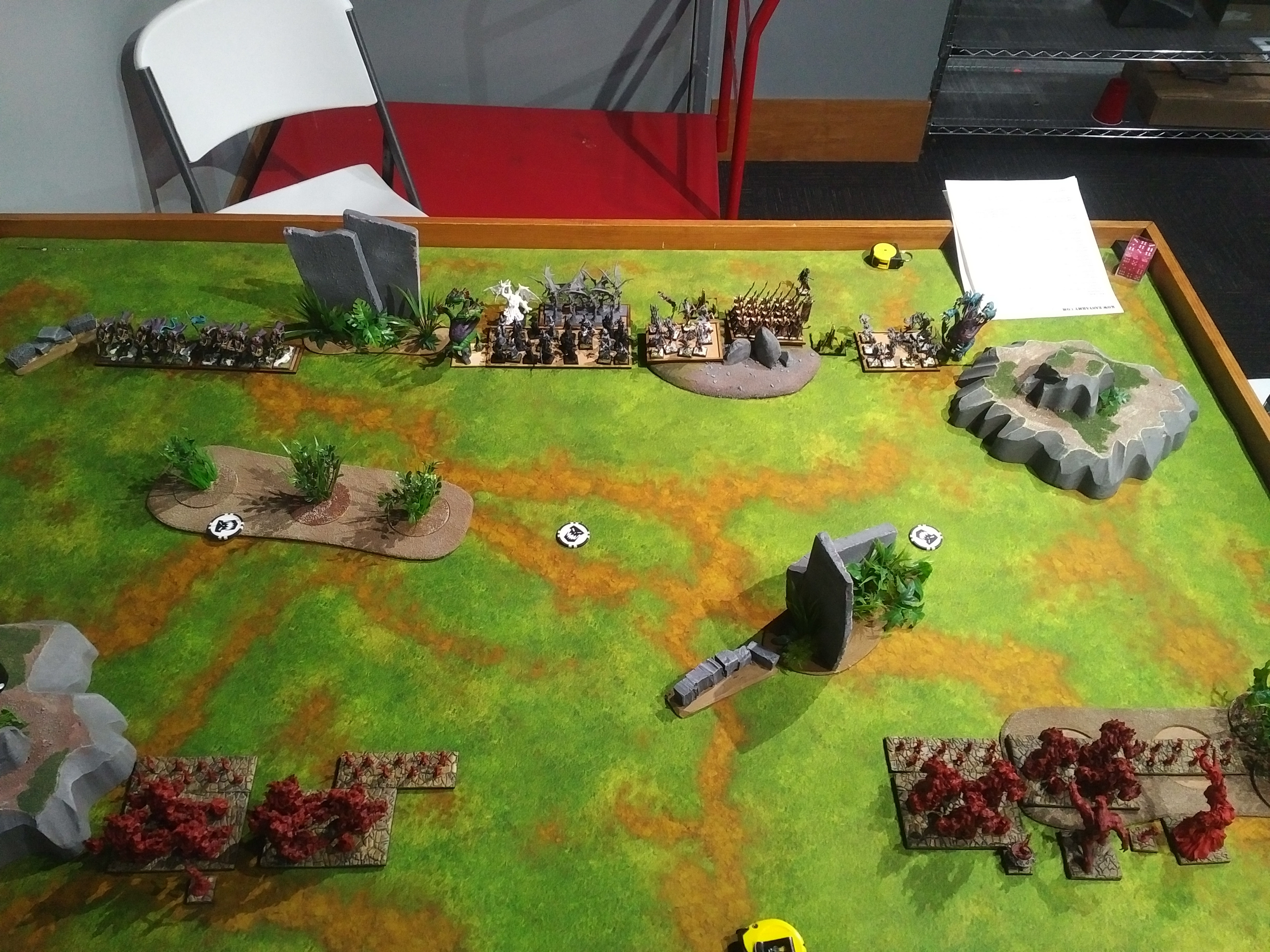 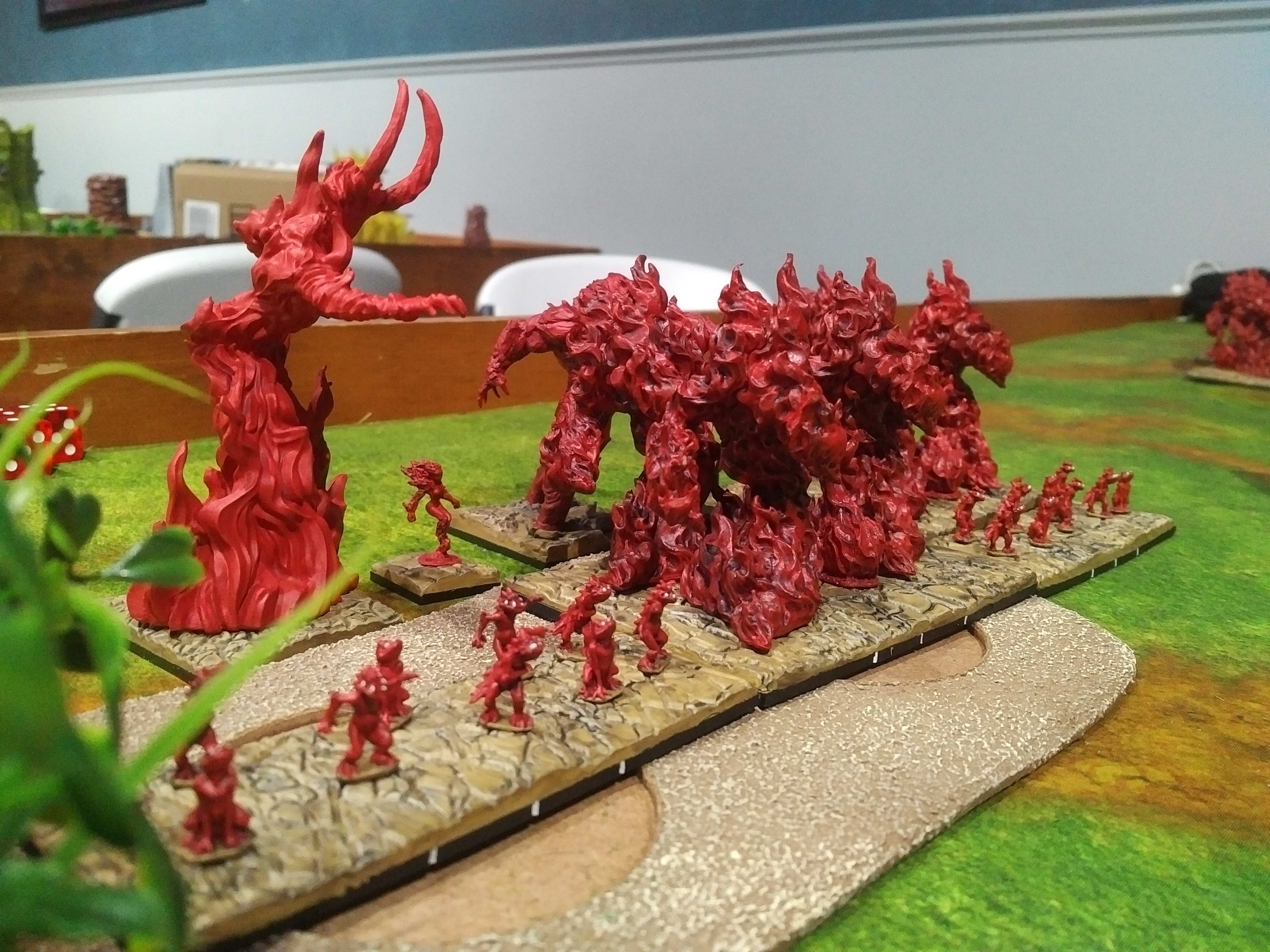 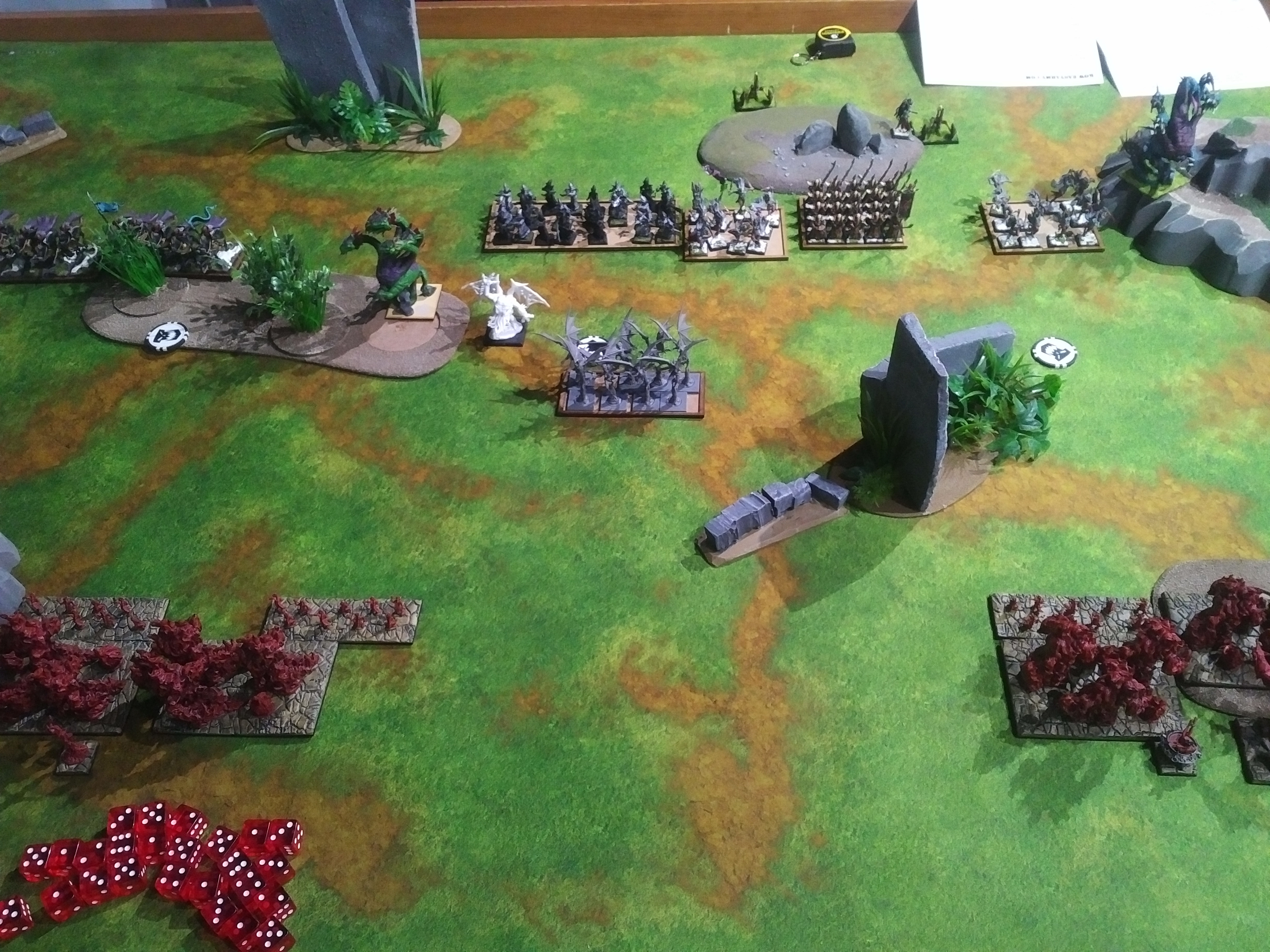 The Kin mobilize, freeing themselves of terrain on the (my) right and increasing the pressure on the left. The shooty center peppers one of the Fire Elemental hordes on the left for 5 wounds, no thanks to the Priestess who failed to bane-chant them (and would fail consistently to get 2 successes throughout the game), and one bolter tags Agnes for a wound. 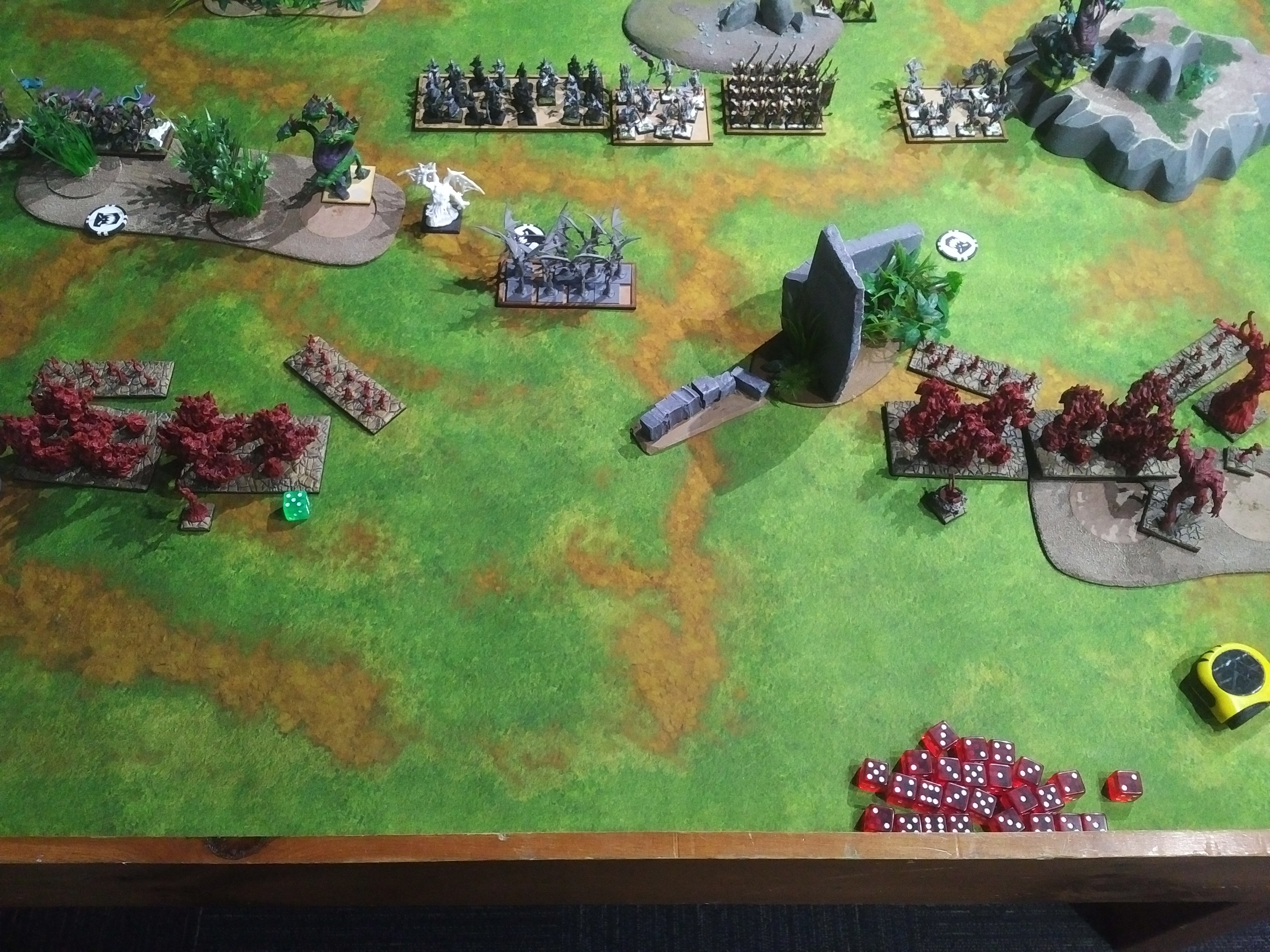 Bloodfire scoots forward, bringing Ember Sprites to bear where able. Sprite vomit burns the Gargoyles and the pathfinding Death Knights but rout tests cant even pull a waver (missed Gargs by 1 :P). Heal is cast down the line, bringing the wounded Fire horde to 3 but doing nothing for Agnes wound. 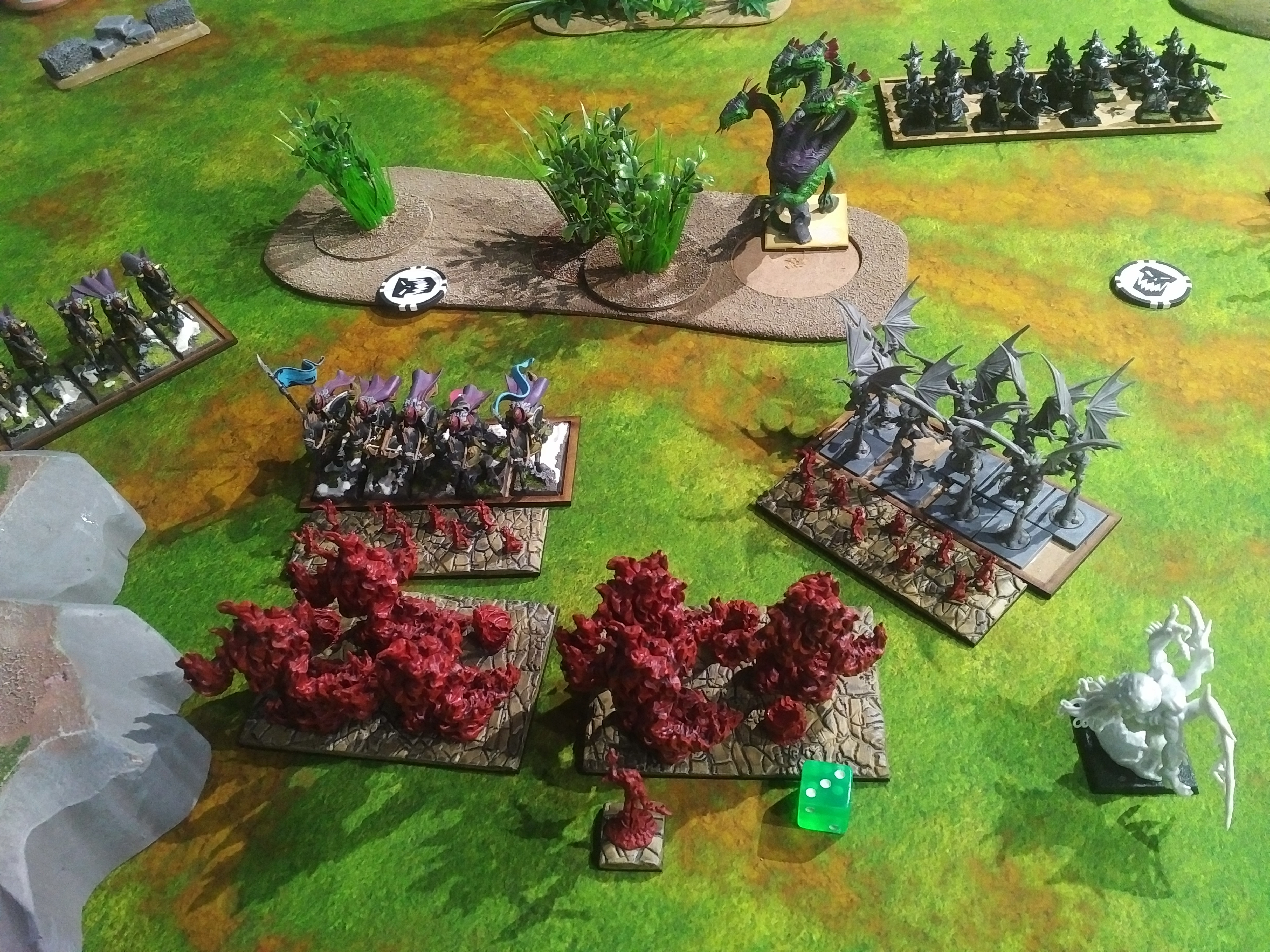 Kin respond with some dancing on the right flank, not wanting to dive into the Bloodfire heavies, but sufficient aggression on the weaker redemental left. Dark Knights and regenerated Gargoyles slam into the Ember Sprite screens as shooters reload 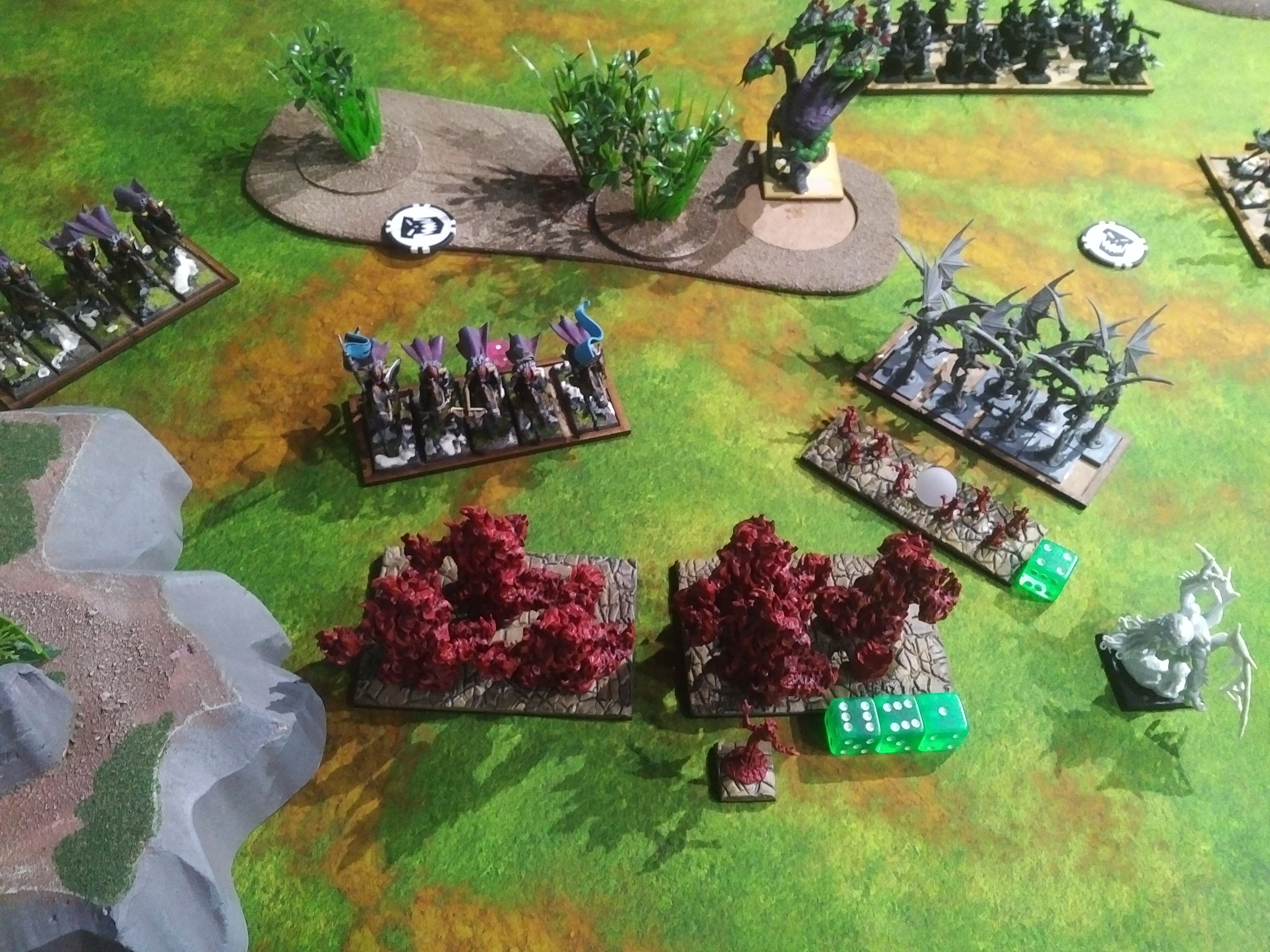 and put some serious hurt on the wounded Fire horde. They somehow survive on 13 wounds, though the Sprites either pop or are frustratingly wavered. 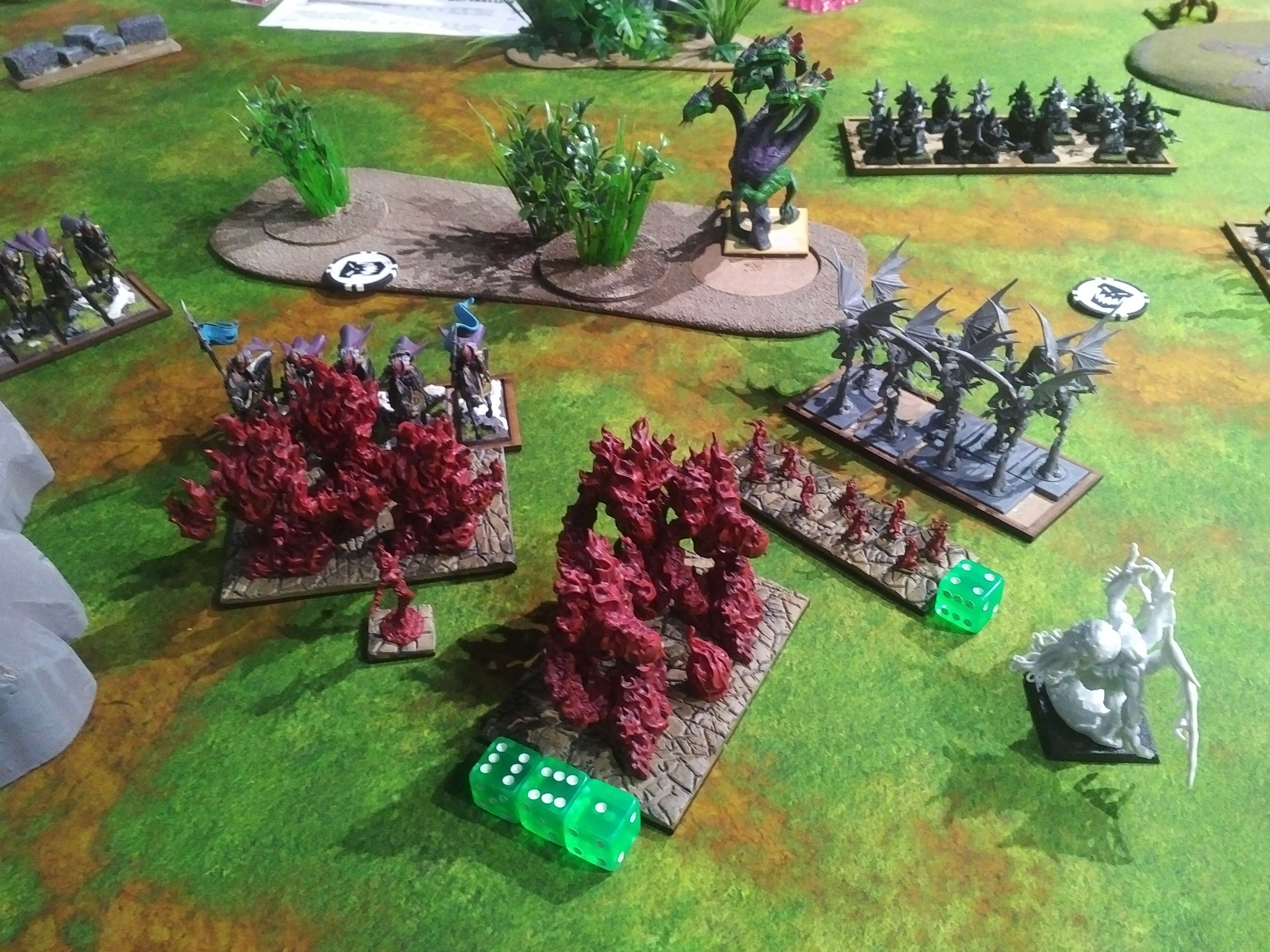 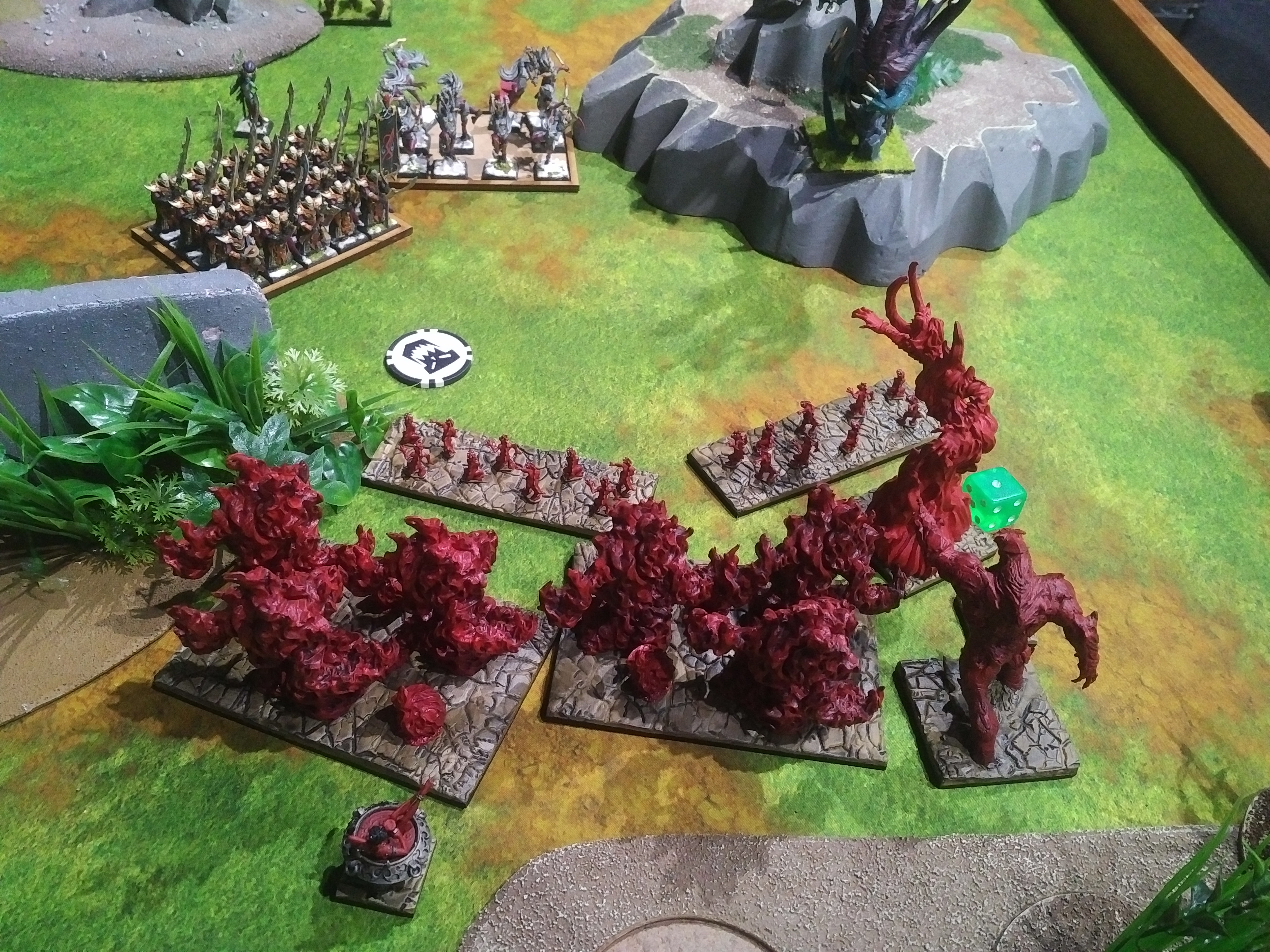 On the right flank, the red tide slops into shooting distance, tossing some Ember Sprite breath into the Blade Dancers and then eradicating the Hydra. Props to Agnes and her hate ray for like 8+ of those 14 wounds it took. 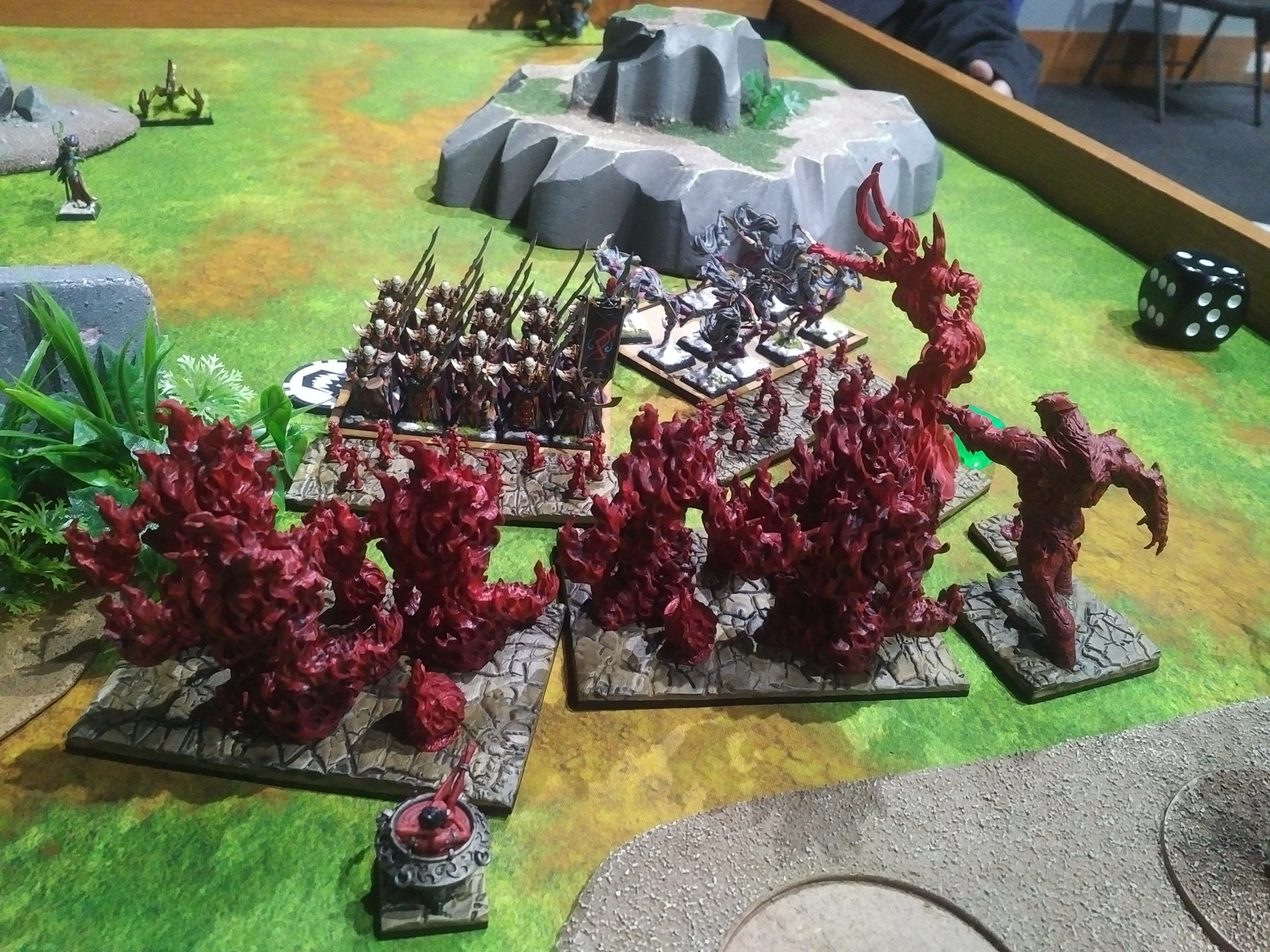 The Kin retaliate for the Hydras death by descending upon the Ember screen, liquifying them as expected. Agnes is also slammed by Twilight firepower (for 5 wounds), towering as she is above the melee. 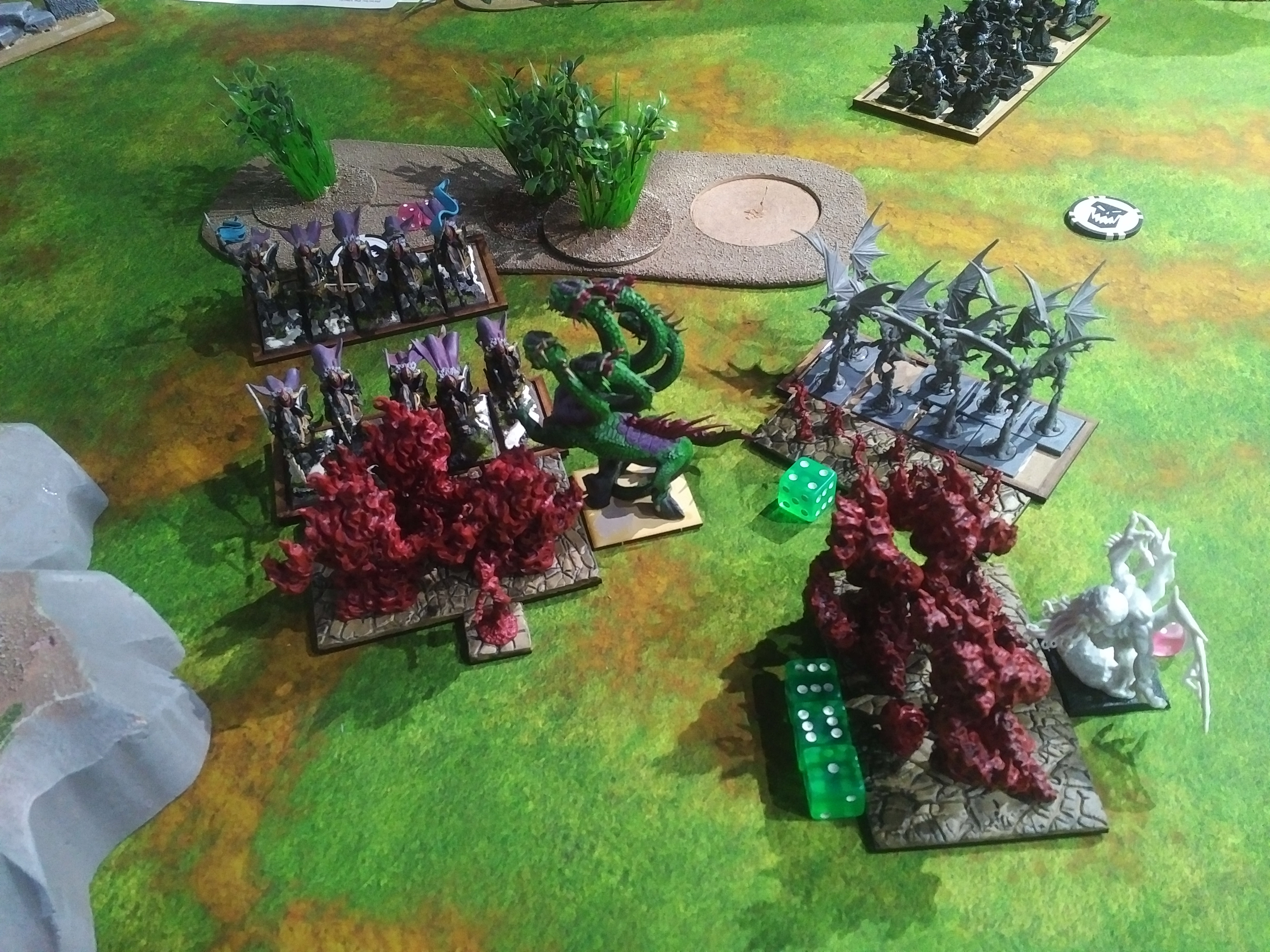 Combat snaps to life on the left as well. Wavered Dark Knights cycle out for a fresh unit, along with a Hydra in the flank; Gargoyles head back into the Sprites; and Basusu counter-charges the rapidly dissipating Fire horde. 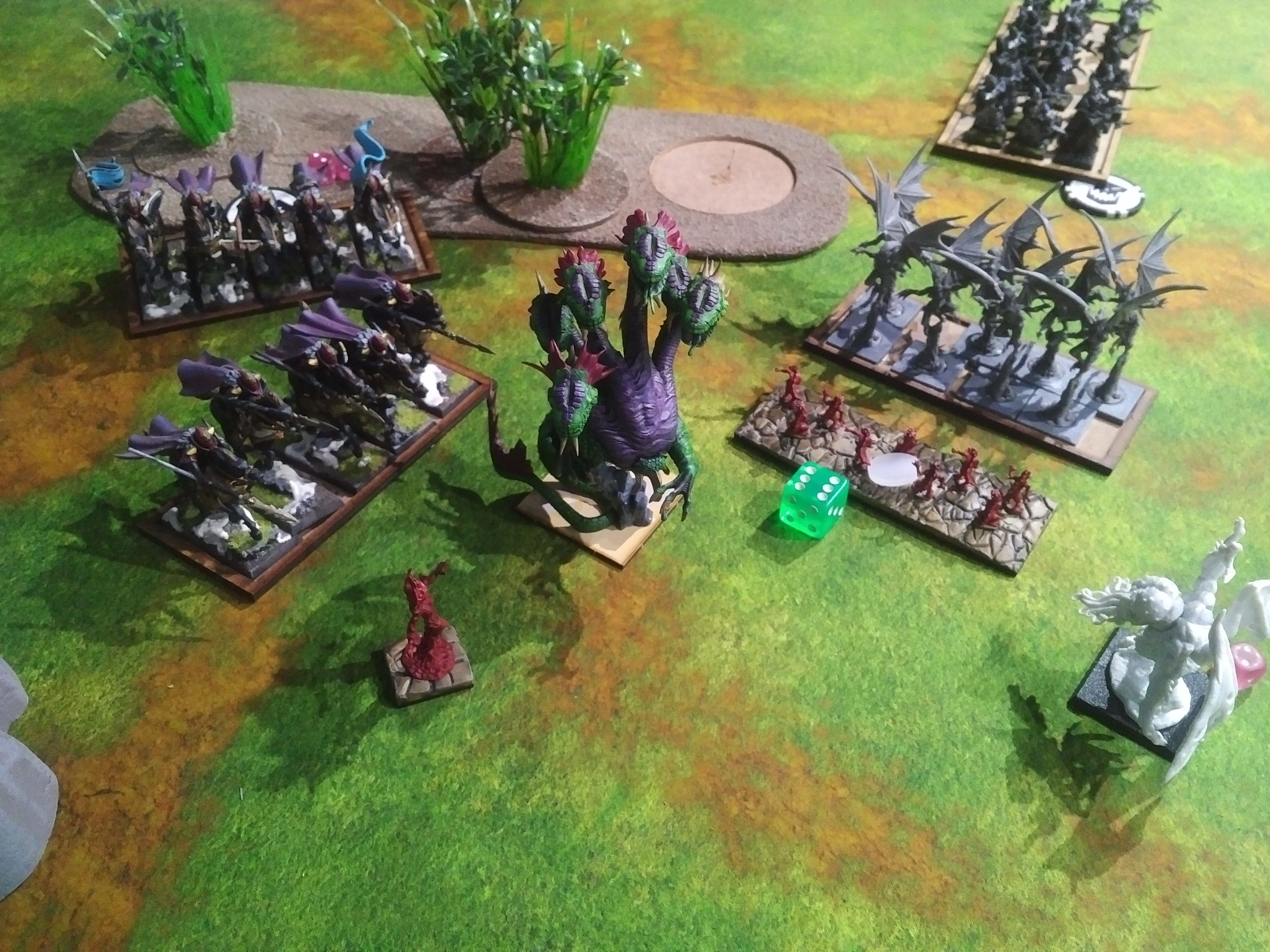 With the exception of the obnoxious Sprites, who waver again, everything dies -_- 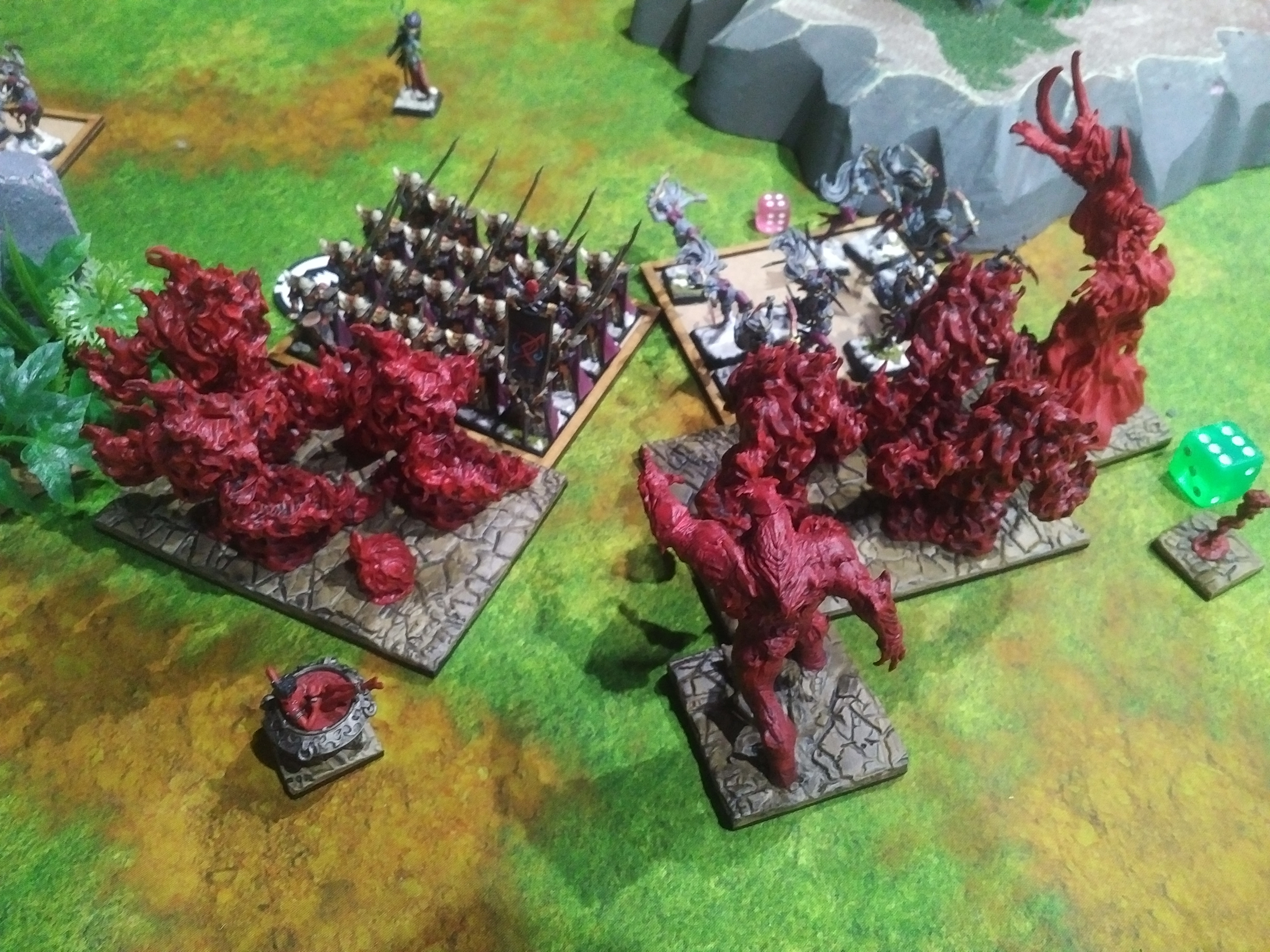 Sally Turn 3 sees the right flank pulverize the Kin regiments, melting both units (a healed Agnes obliterates a few Blade Dancers personally – Crushing 4 in action yall!). The Mage-Priest on the left jukes the Dark Knights in her grill and nukes their wounded compatriots holding the loot token, burning them down with a proper fireball. The CLOFD also reaches over the heads of the Fire Elementals on the right and slams 4 wounds into the Priestess, but cant land the waver/rout. 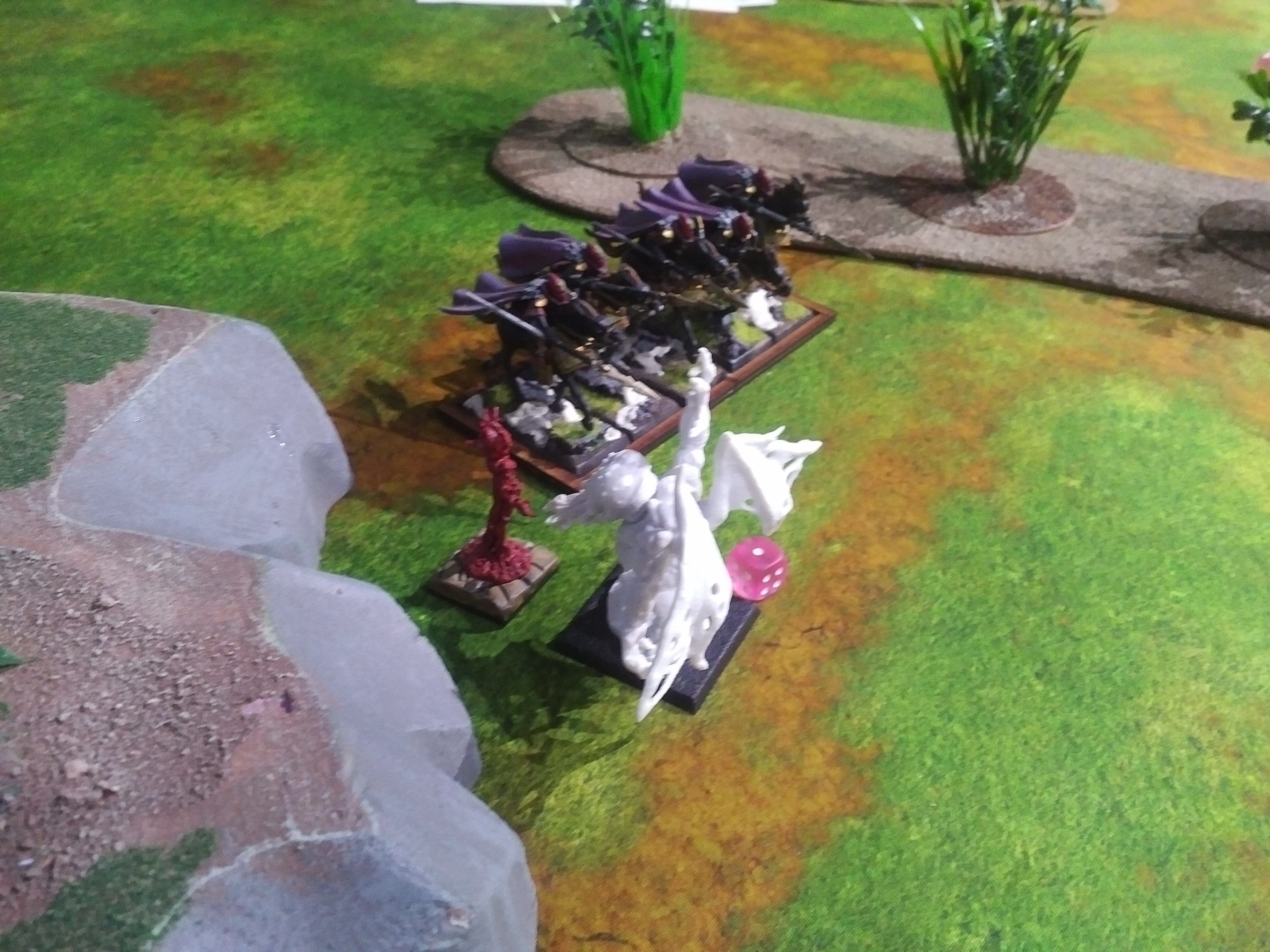 Basusu jumps on her in return, scoring a couple wounds and disordering her, as the Hydra begins his long trek back to the action and the Gargoyles finish squishing the last of the Sprites. 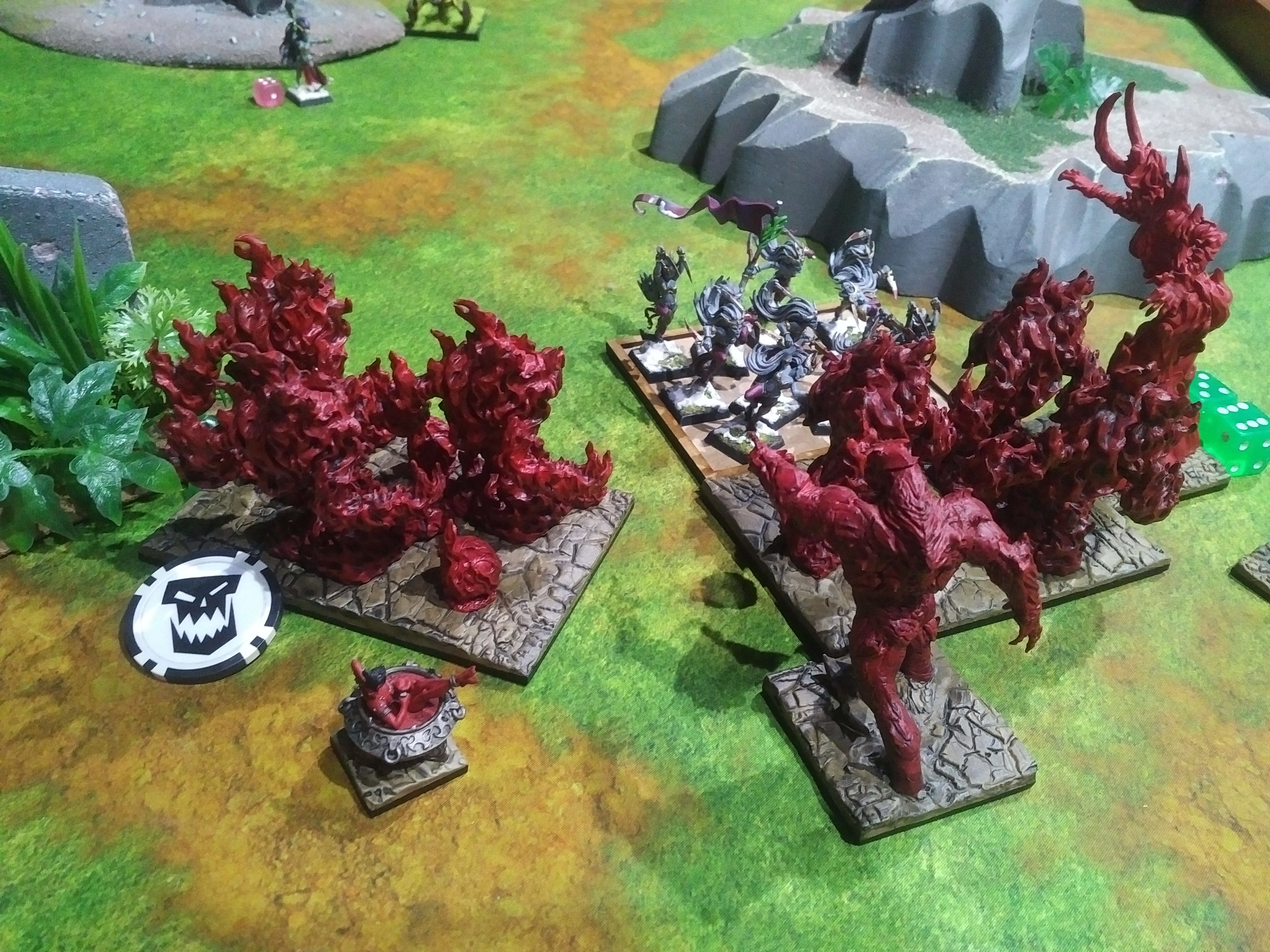 Meanwhile, the Blade Dancers hurl themselves into the Fire horde that killed their sisters, ripping off 4 wounds thanks to a rare successful bane-chant. Agnes also takes a punishing volley of fire, going up to 11 wounds and popping even with the reroll.

As the Bloodfire mourns the death of their living legend, the Blade Dancers detonate spectacularly under 54 Fire Elemental attaks. And far away on the left, the Mage-Priest counter-charges Basusu but cant land a wound. 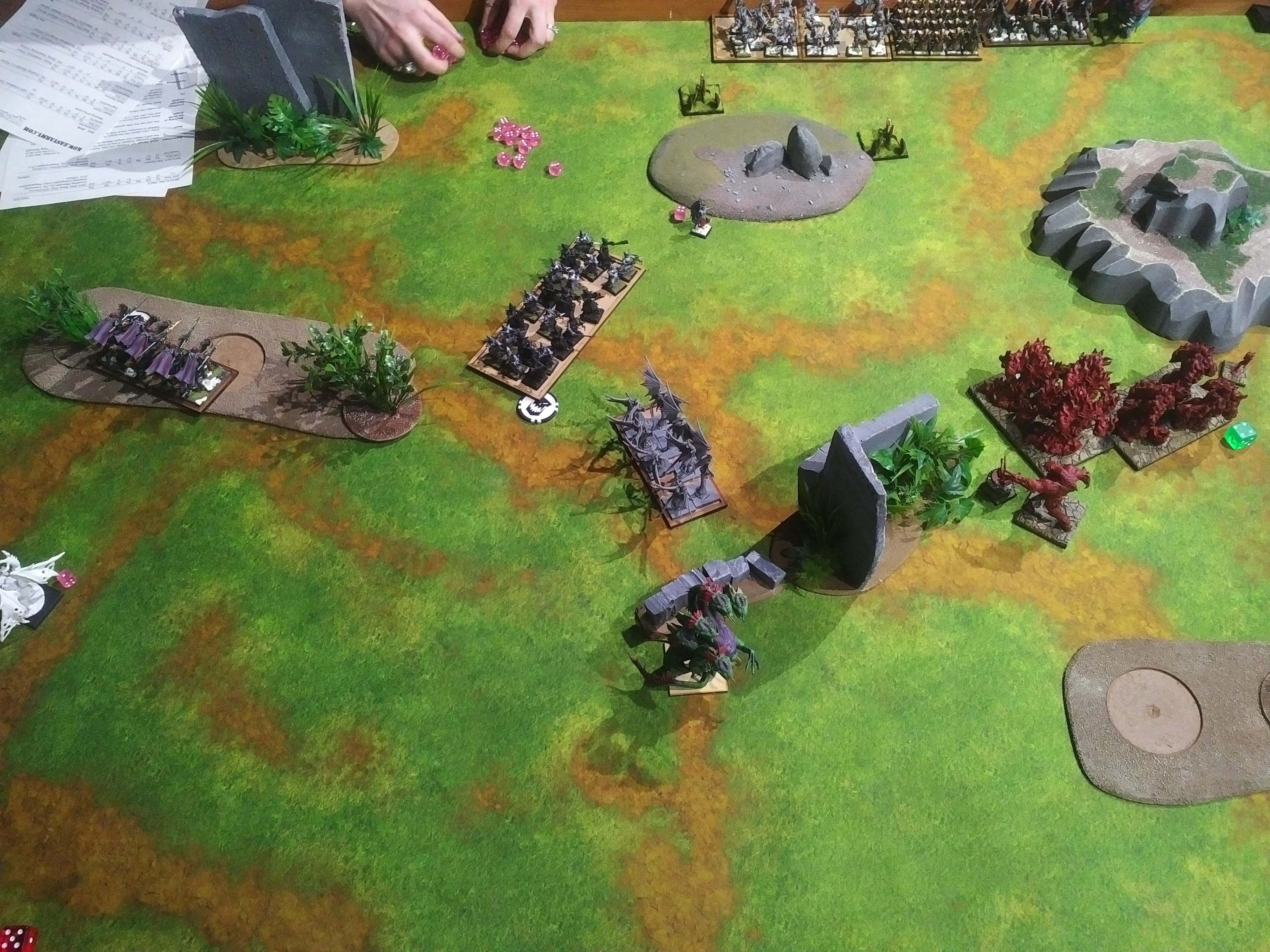 Kin Turn 5 mostly means repositioning the flanking force from the left and shooting red things. The closer of the remaining Fire hordes is ventilated by insane crossbow fire + high explosive bolter rounds, popping it in one go @_@ Also Basusu makes good and routs his Priest quarry. 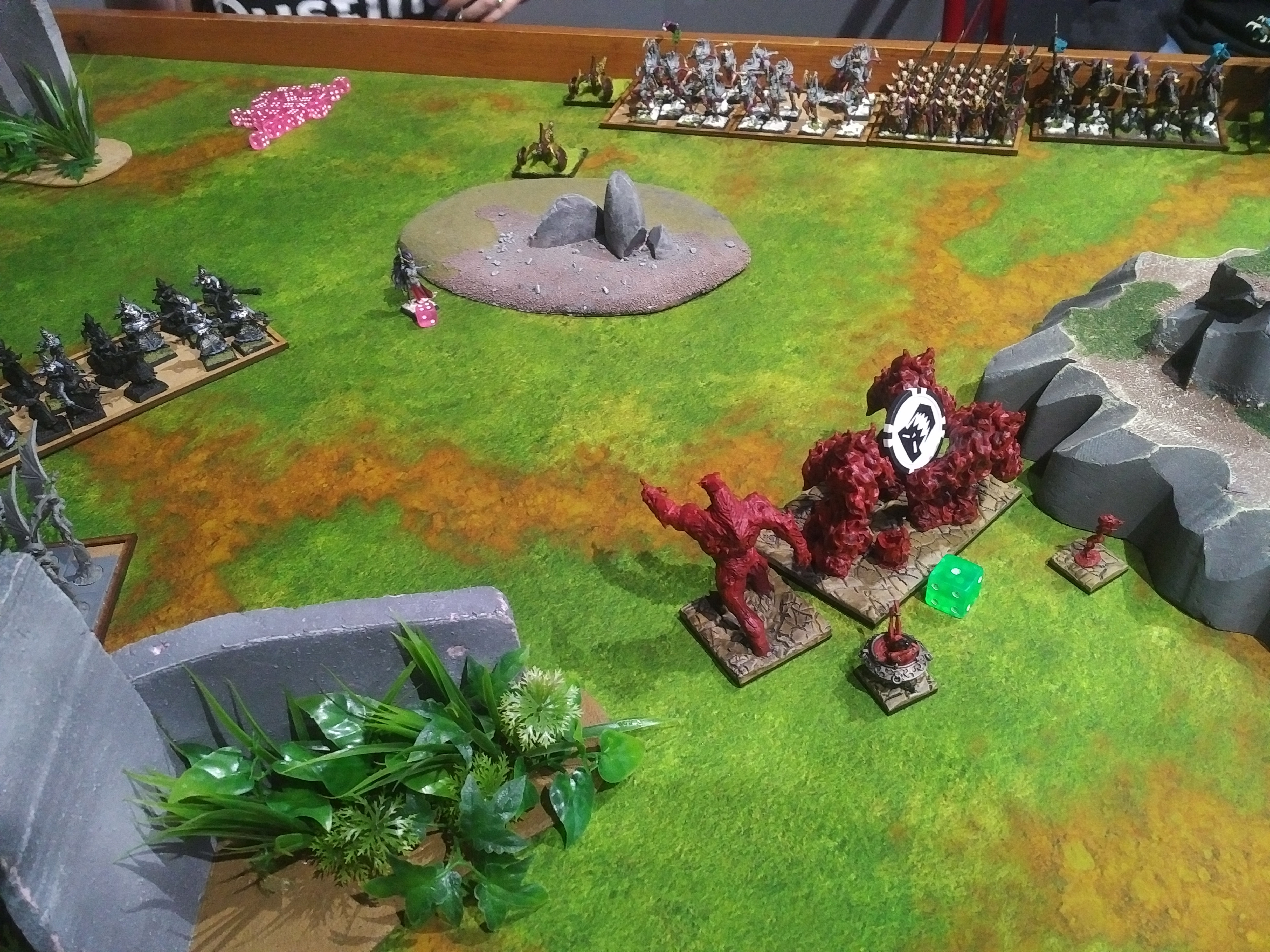 Very low on options, the Redementals shove on, hoping for some kind of long breath attak or surge charge. The last Fire horde is healed for 3 and the CLOFD chunks some damage on the right Bolt Thrower, routing it. 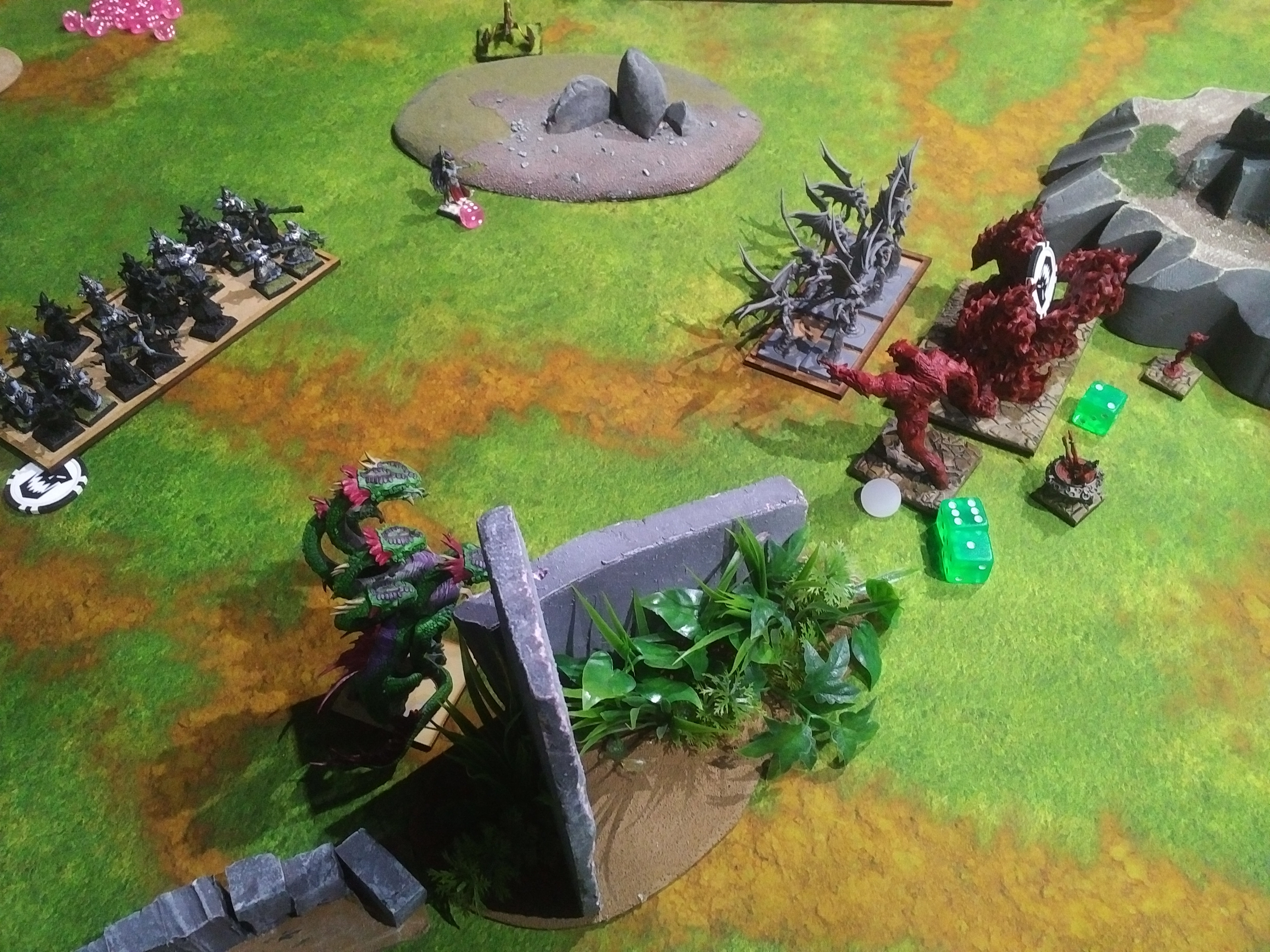 Turn 6 opens with those plucky Gargoyles charging the Fire horde (for 1 wound), plus another withering round of fire, this time into the CLOFD for a very plucky waver (7 wounds shooting for 16/17 and landed the 10). 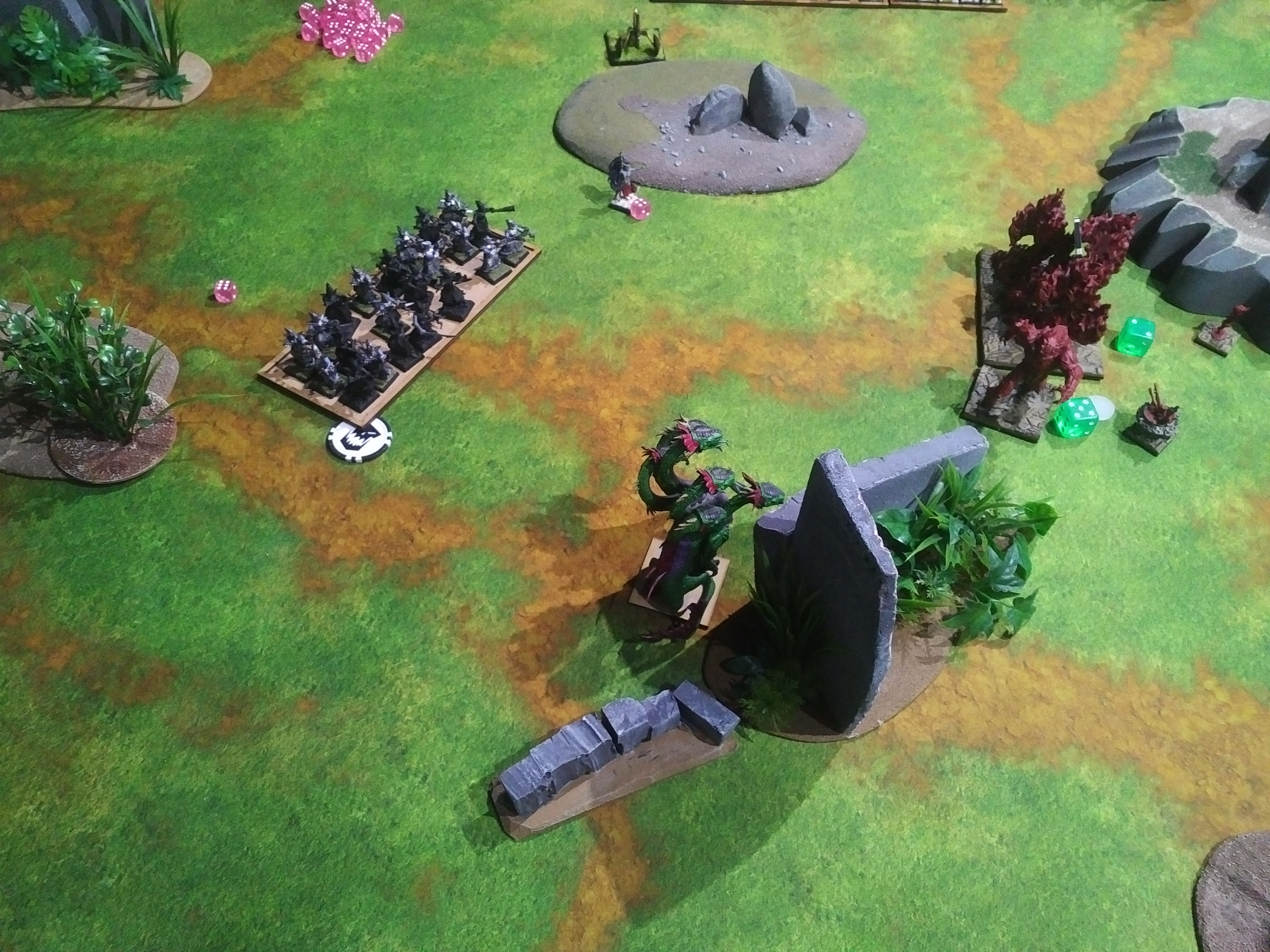 The Gargoyles die in the counter-charge and the CLOFD turns to keep its front to the Hydra if we go into Turn 7. The ladies combine their powers and heal him for 2

With a final sneer, the Twilight Kin send the Hydra into the Fire hordes front, where it flubs pretty spectacularly. Shooting stays locked on the CLOFD, ending him with a total of 16+ wounds.

Finally, the Fire Elemental horde burns the Hydra down, but that leaves Salamanders with 1 token to the Twilight Kins 2.