My clubmate is headed to the US Masters and wanted to get some practice with his finalized list, so I threwdown in the name of getting my teeth kicked in for a good cause ;D

Quintuple Fire hordes \m/ Also went with the ABP over Agnih, almost entirely because she costs 10 more points, which messes with my items (i.e. BOTG costs 5 points more now). But also because while ABP is a doofus hes better at grinding then she is, and the grind is pretty inevitable for my army.

Bash Bros are still horrifying, but main changes are the now defunct Herja becoming a bunch of Trolls and Direfangs squeaking their way into the list at the cost of downgrading the Sons into Bloodsworn and Fiends into Spectres. Cool to see the Fangs in there, hope they work out for him. Loads of potential but slow and a big target.

We diced up good old Pillage and heavily weighted one flank with markers, as I prefer. He won first turn and took it, after some consideration. 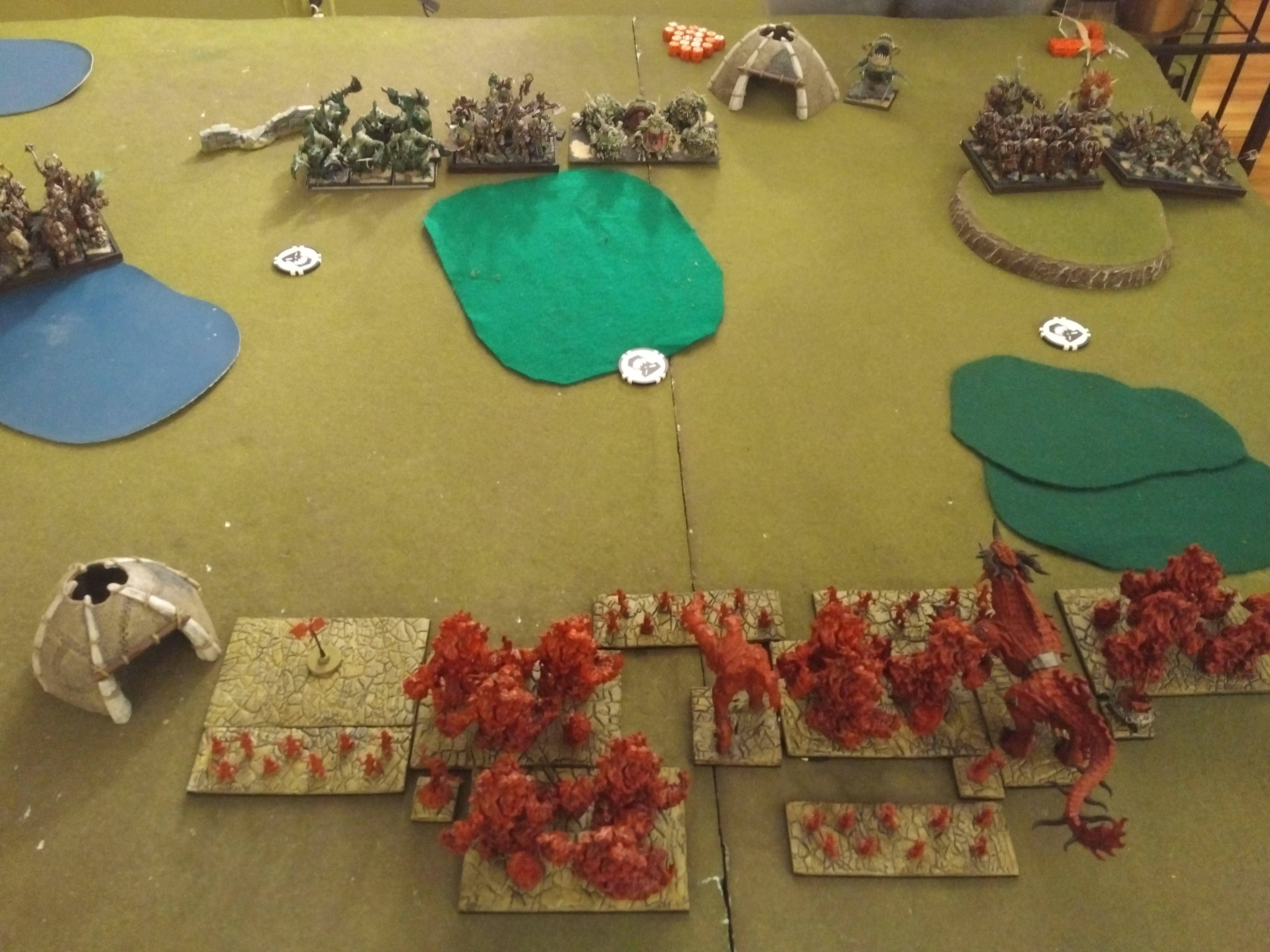 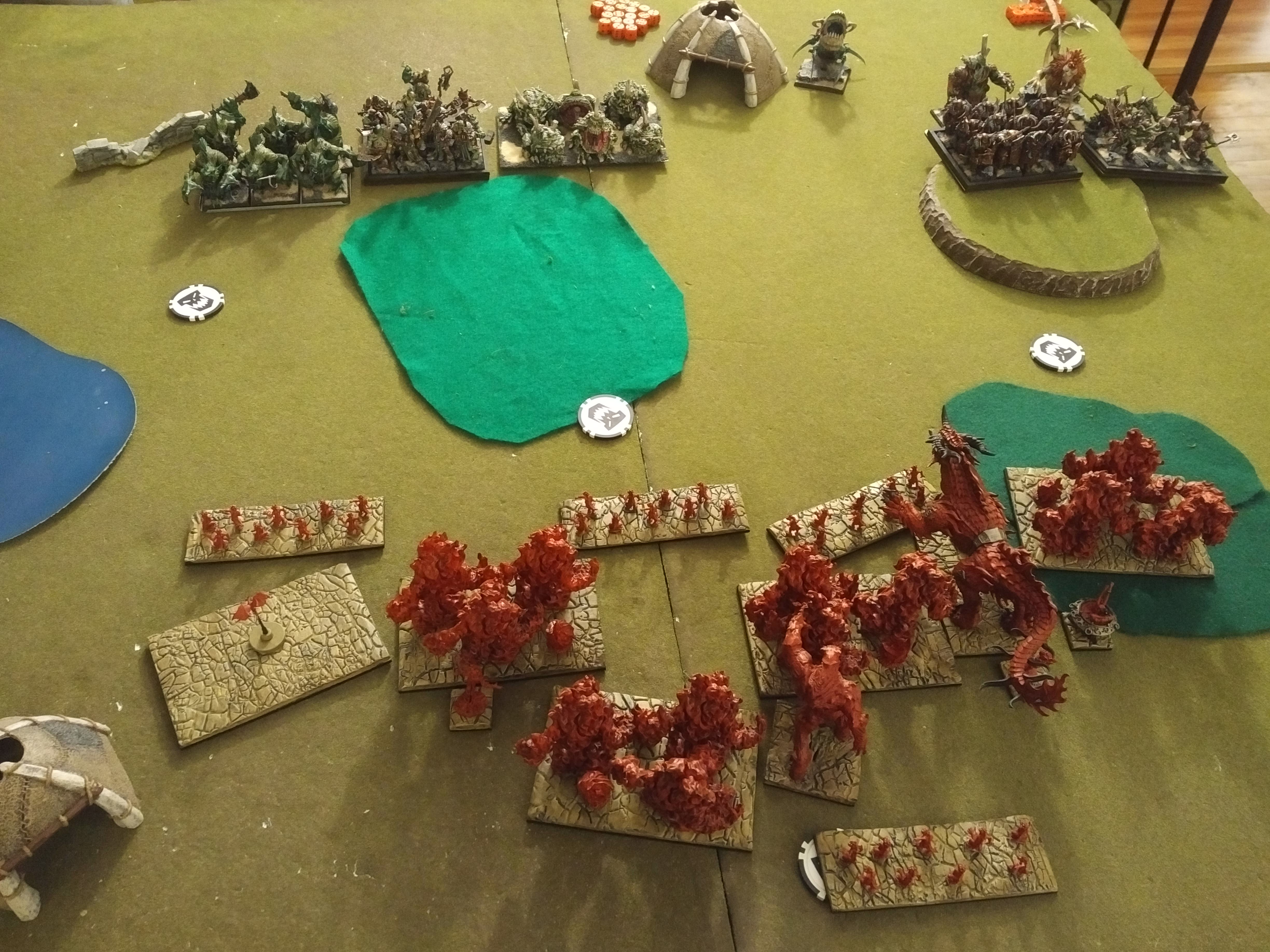 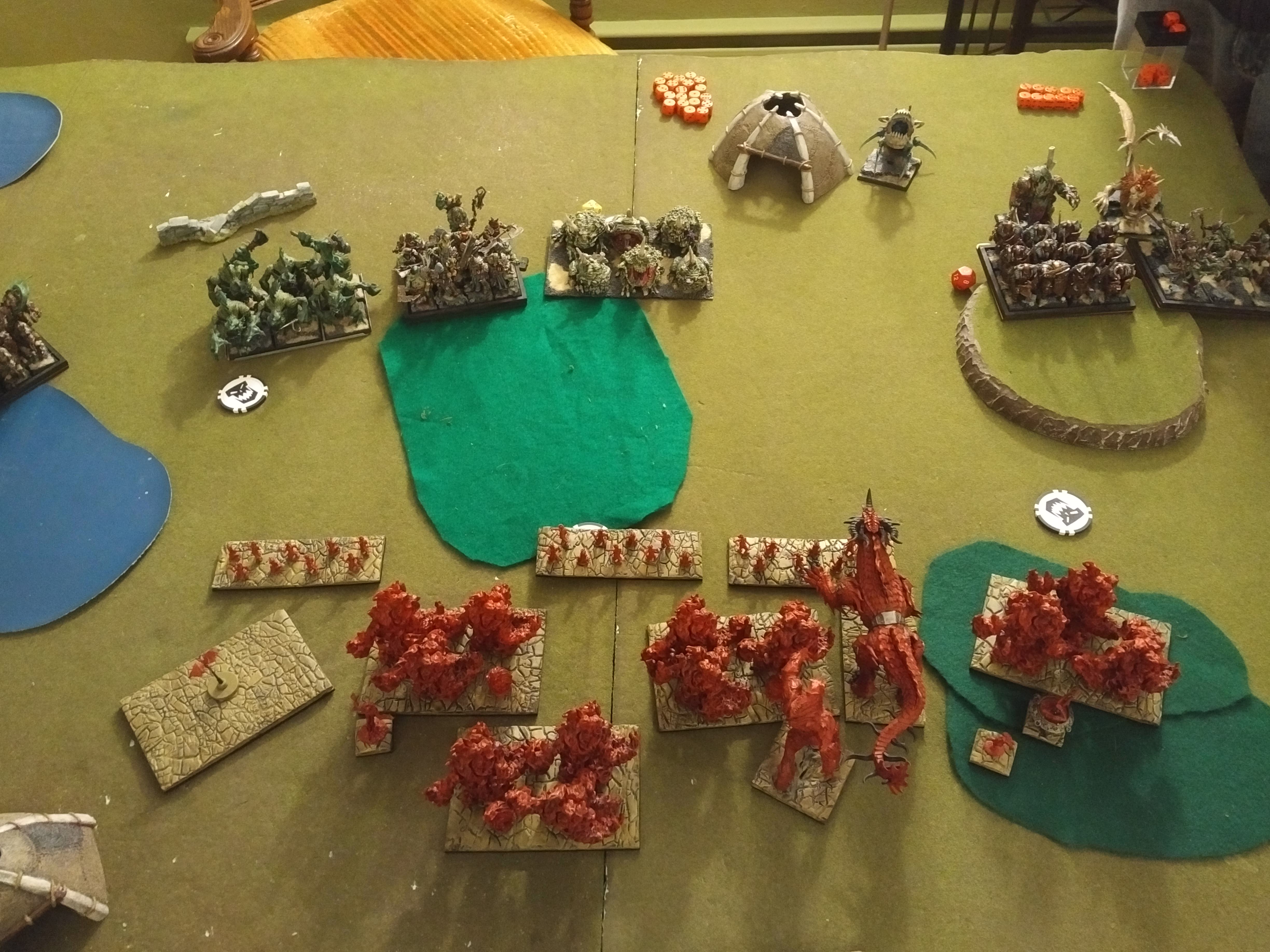 Once again the ravenous hordes of armor and aggression barely shuffle forward, though the revving of the fast blender units to either flank is palpable. Bloodfire responds by scooting Sprites into range and liberally applying vicious breath to things – both Direfangs and Warband begin to accumulate damage. The Ankyldon yelled at things too but to little effect. 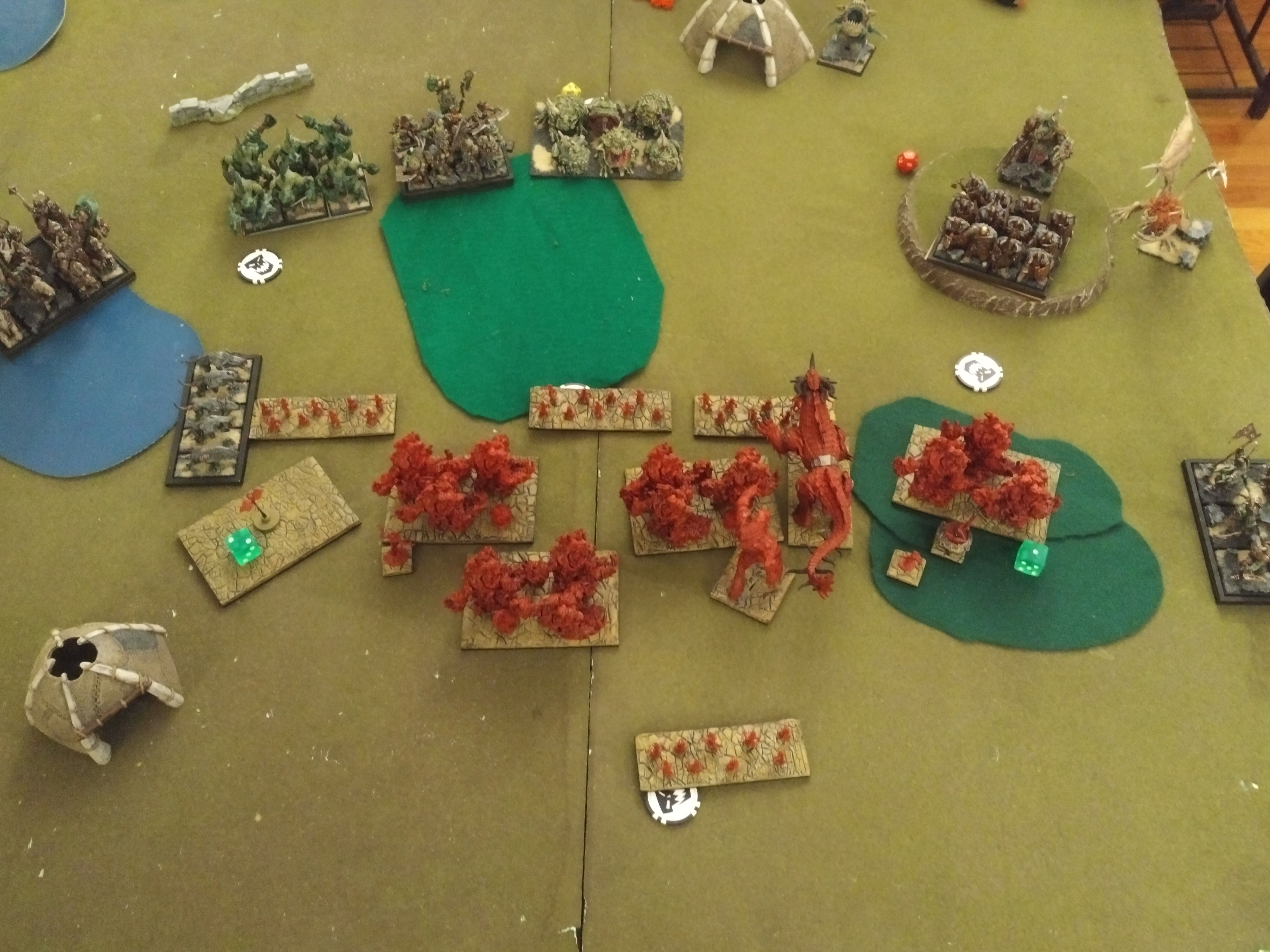 Turn 3 means carnage! Sorta! Tundra Wolves whip in from the left flank into some poor Sprites, but despite a few wounds cant even waver them Q_Q. Fallen and Mounted Sons prepare to obliterate the right and left flanks respectively, as the big flying monstrous heroes salivate and get ready for that trademarked double charge tagteam one hit KO finisher. Also the King breaths on the rightmost Fire horde for a wound, and I have no idea how the leftmost Fire horde was wounded but that happened too (cheaty shot from the Conclave?? No LOS and a penitent for 1s makes that hard to believe). 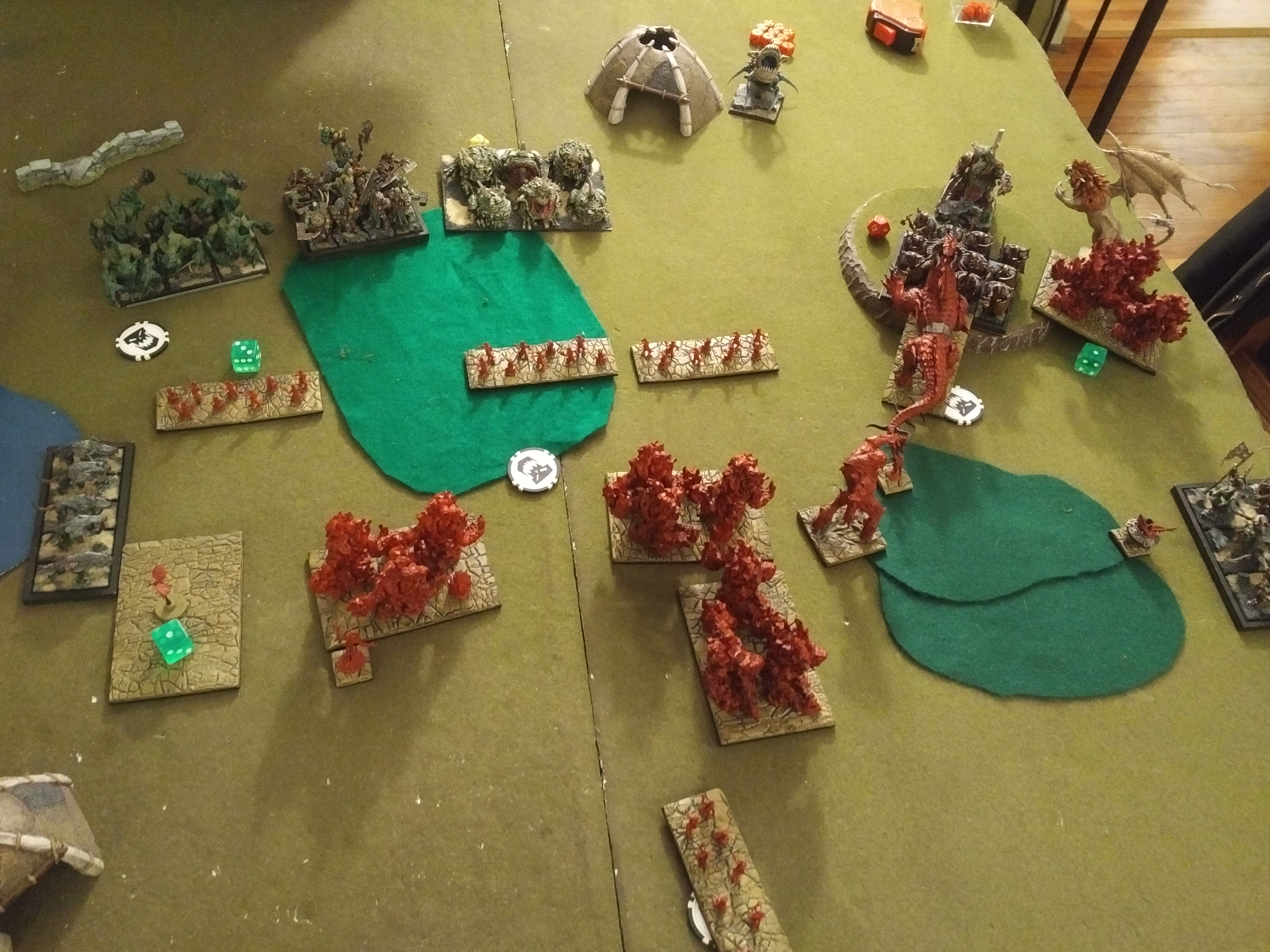 The Bloodfire response is  optimistic at best. No brainer stuff happens: left Fire horde punches the Wolves (wavered only!?!), Sprites wander forward to puke on things and get in the way (Direfangs absorb yet more heat), and the Iron Crown Priest + CLOFD combine to fire on the Fallen (not doing nearly as much as expected). 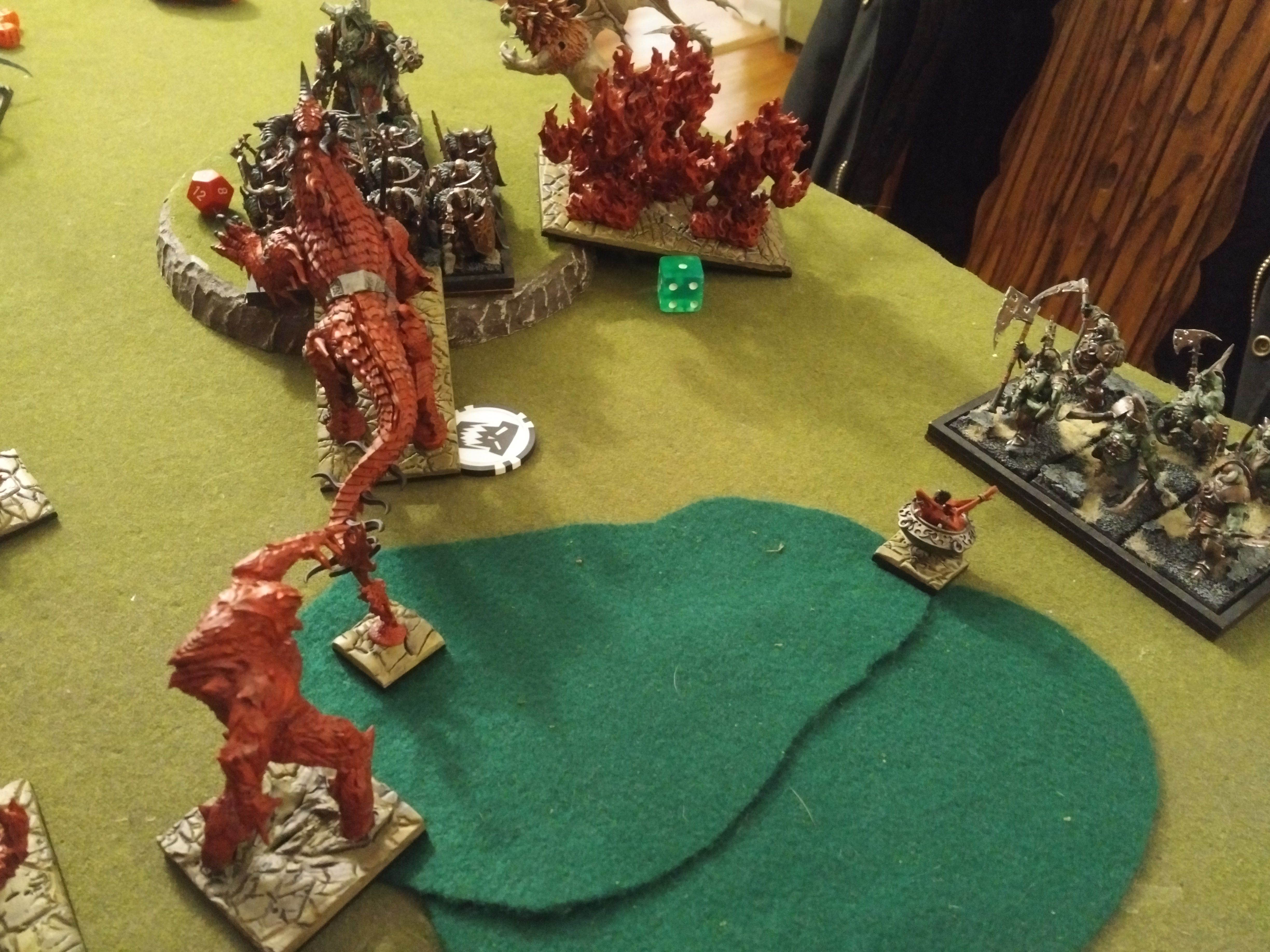 Then things get dicey. The Ankylodon goes aggro into the Warband, with dreams of thundering through them and facing off with the big bads behind them. Except hes hindered (#striderdreams) and a cuddle bug so doesnt even waver them. Then instead of surging the right Fire horde into the Fallen – out of fear of sticking and then taking the King (and possibly also Lurker) in the flank – they just straight up charge the King. Knowing that theyll likely stick and get the Lurker in the flank, or get stuck grinding something they cant beat. 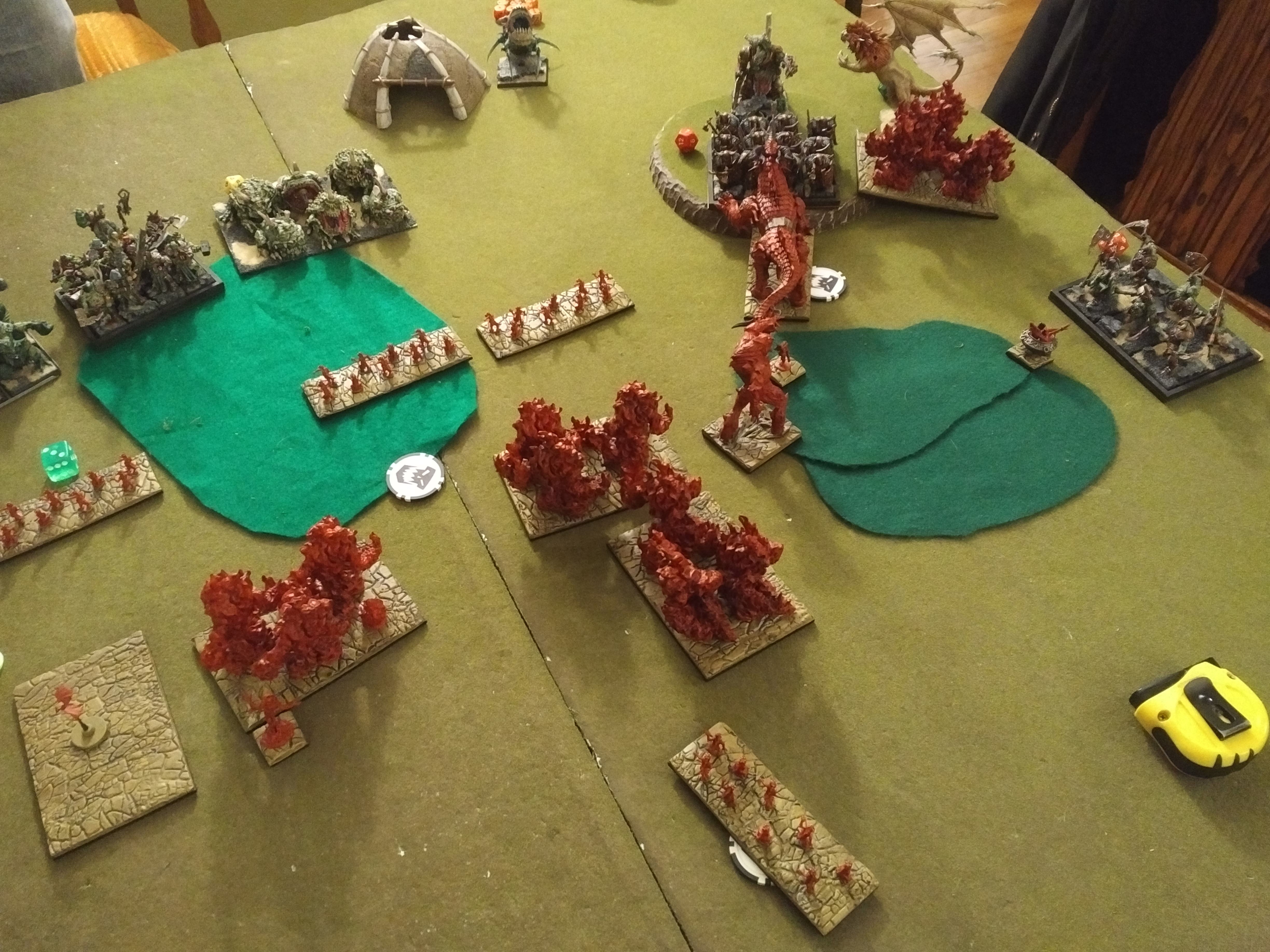 So yes, nothing really works, and to make matters worse the charging Fire horde outstrips any hope of Inspiring. The Herald scoots herself over to sorta block the Fallen (they can nimble charge the CLOFD anyway), and falls 0.5 short of inspiring that dumb Fire horde. I dont think it was a terrible plan, but it was certainly the least likely to succeed, even if it had the highest potential payoff – the thing about Fire Elementals is that when all you have is offense, if you can actually hit things they tend to die. 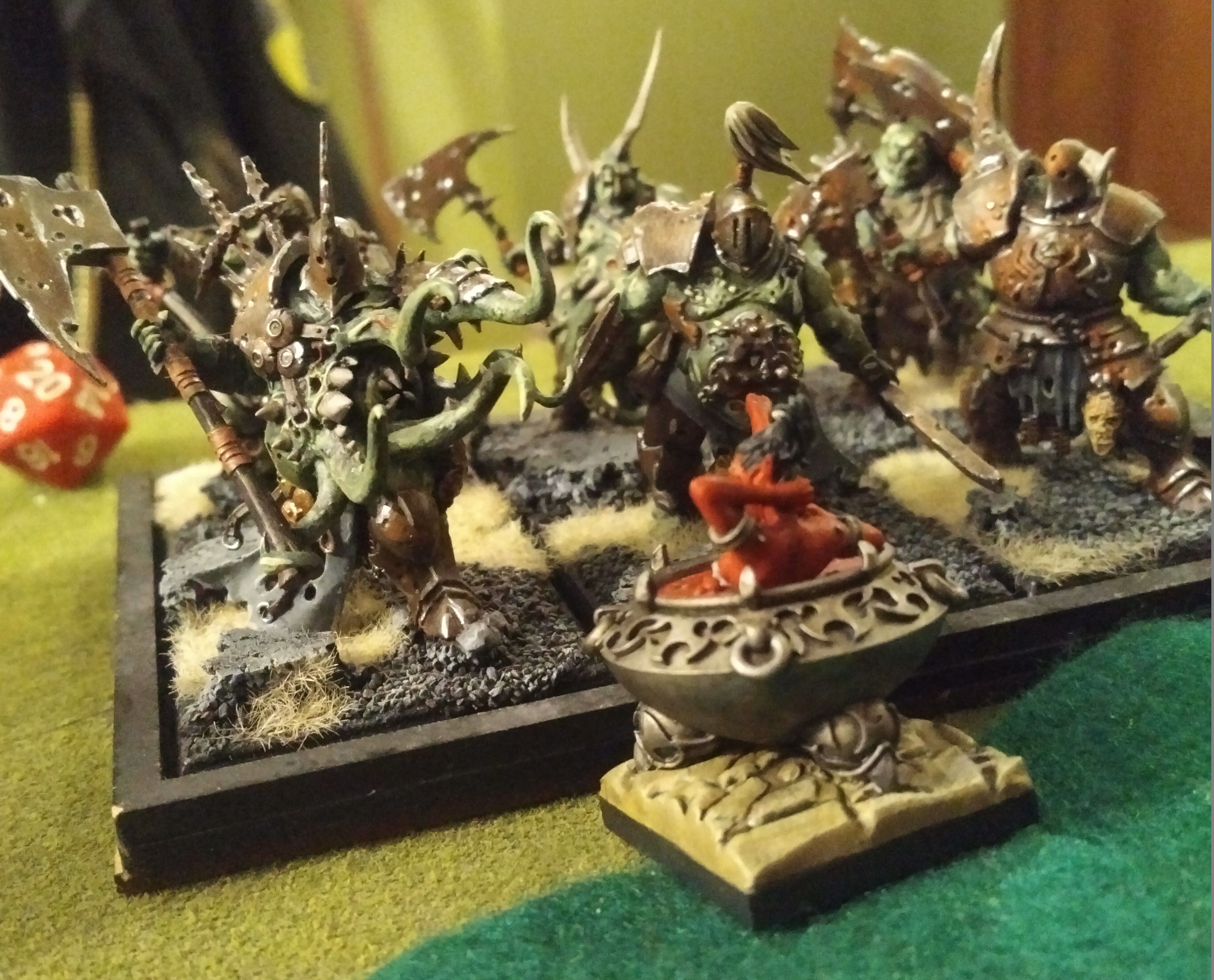 The Varangur counter across the board, as expected. 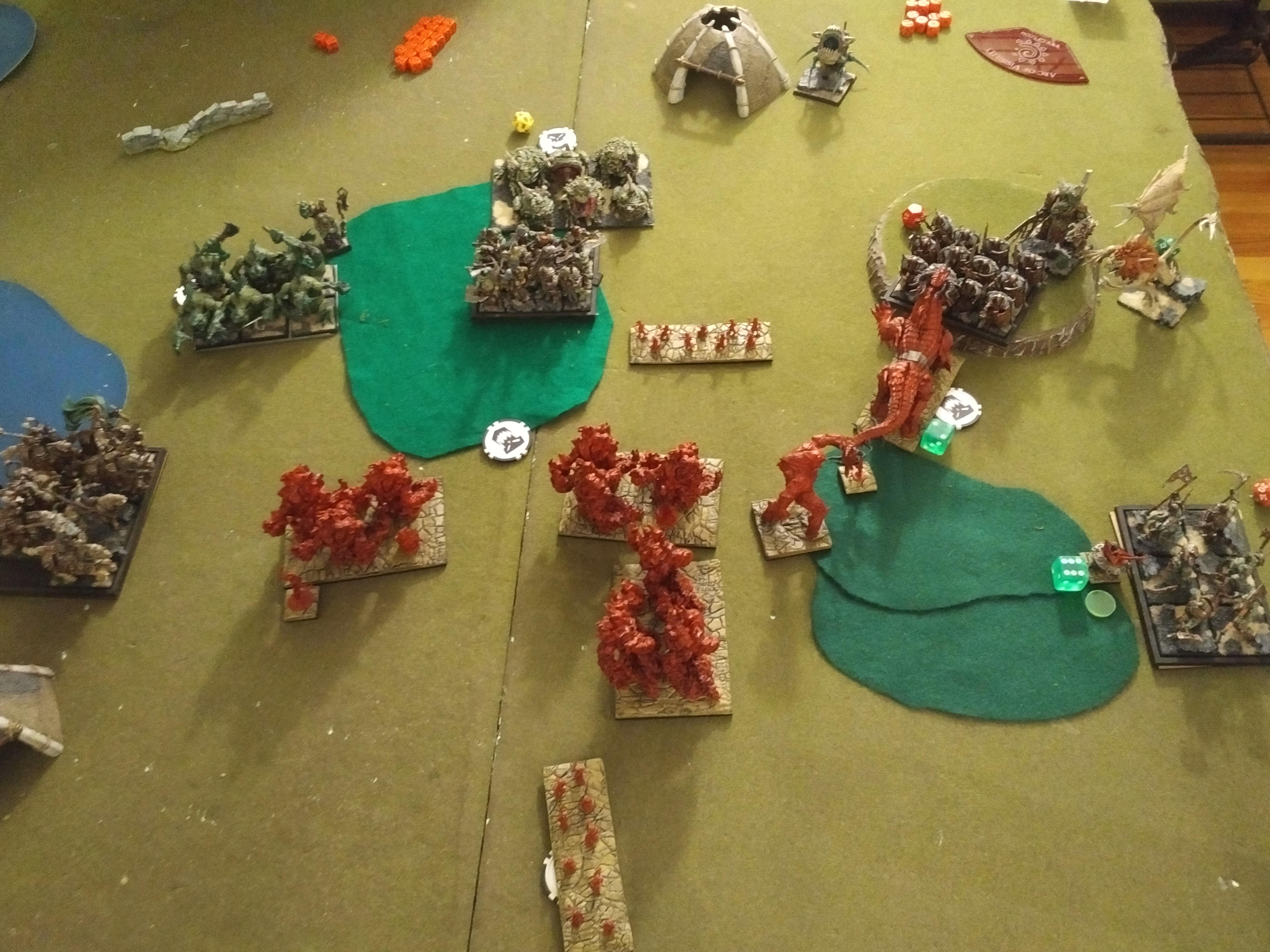 Lots of red things die: left Fire horde to Mounted Sons (13 wounds in one frontal charge), 2/4 Sprites to Trolls + Bloodsworn, right Fire horde to King front + Lurker flank. The Herald happy came away with a waver vs the Fallen, and the ABP was of course fine. 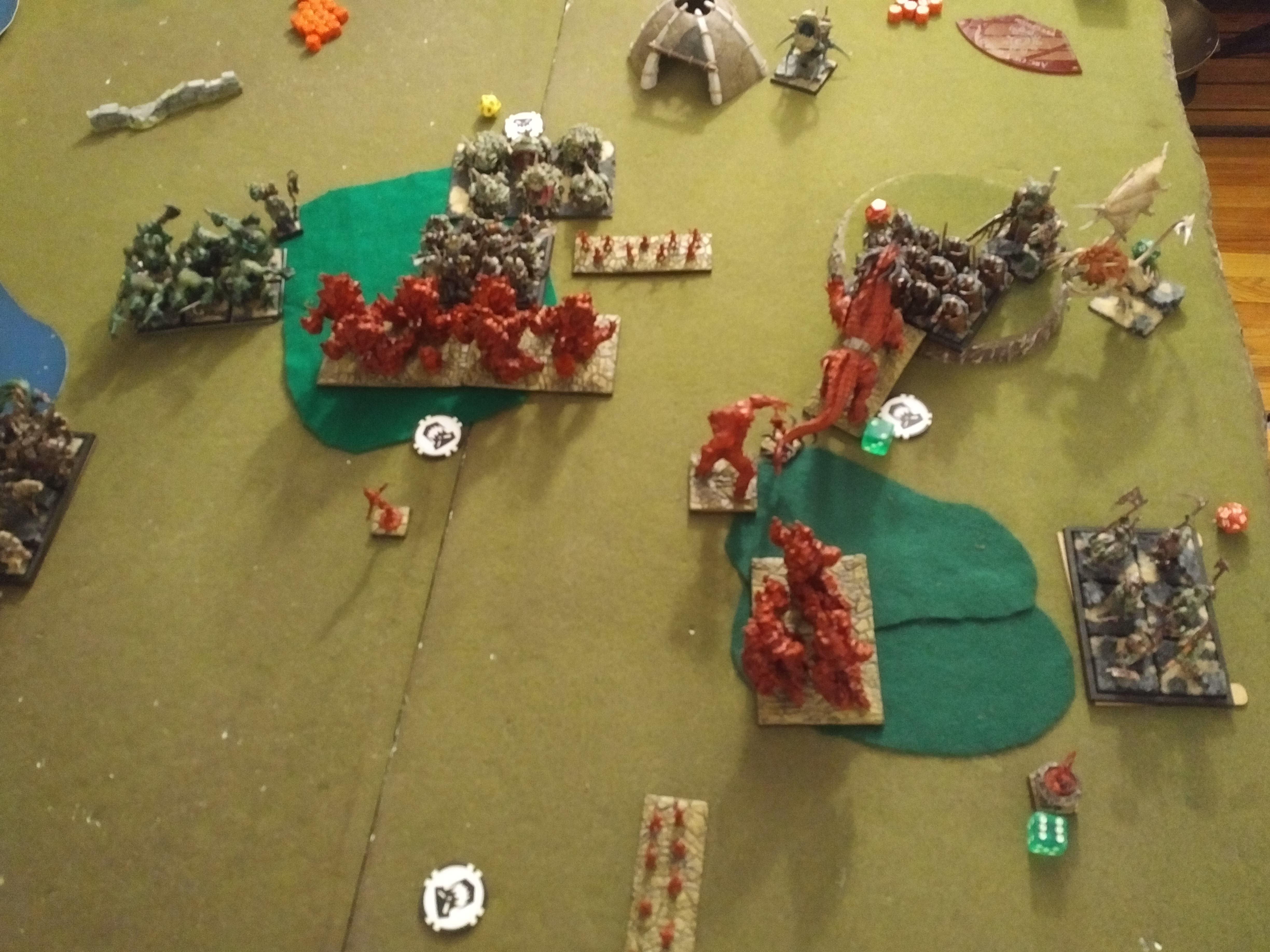 Theres a lot of pain collapsing in from the left, so the red tide needs to punch up and to the right and turn to face. Double Fire hordes charge the Bloodsworn, Ankyldon jumps back on the Warband, and the third Fire horde surges into the Fallen (on a sweet 7 of 8 surge from one Priest), after they take a shellacking from the CLOFD. 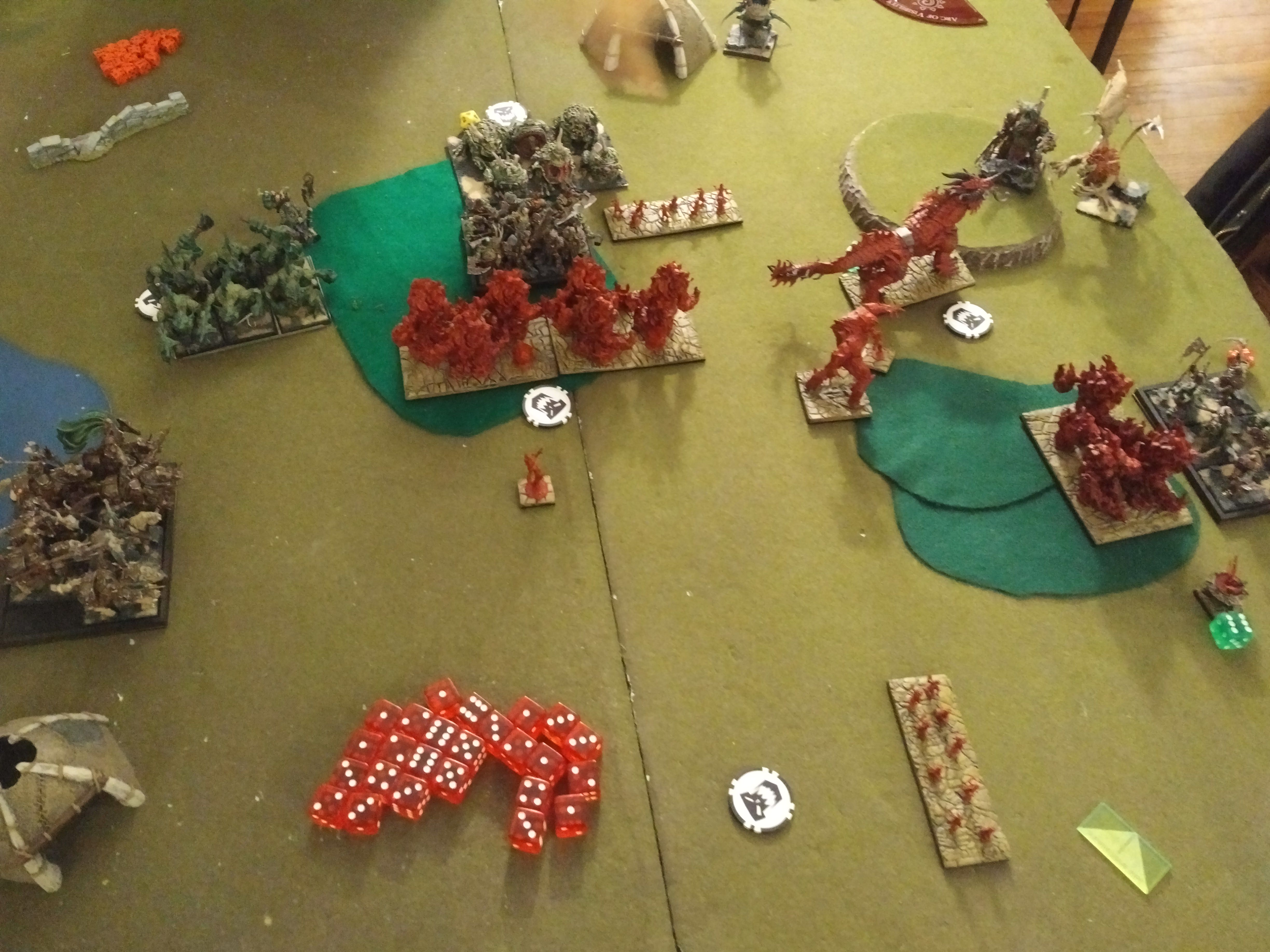 While the Ankylodon roflstomps the Warband, disappointment reigns on the Fire hordes. Somehow 36 CS2 attaks cant break the Bloodsworn (13+ wounds vs 19 nerve is too hard to beat twice), who waver. And likewise the Fallen take significant damage but are only wavered, despite having no inspiring. 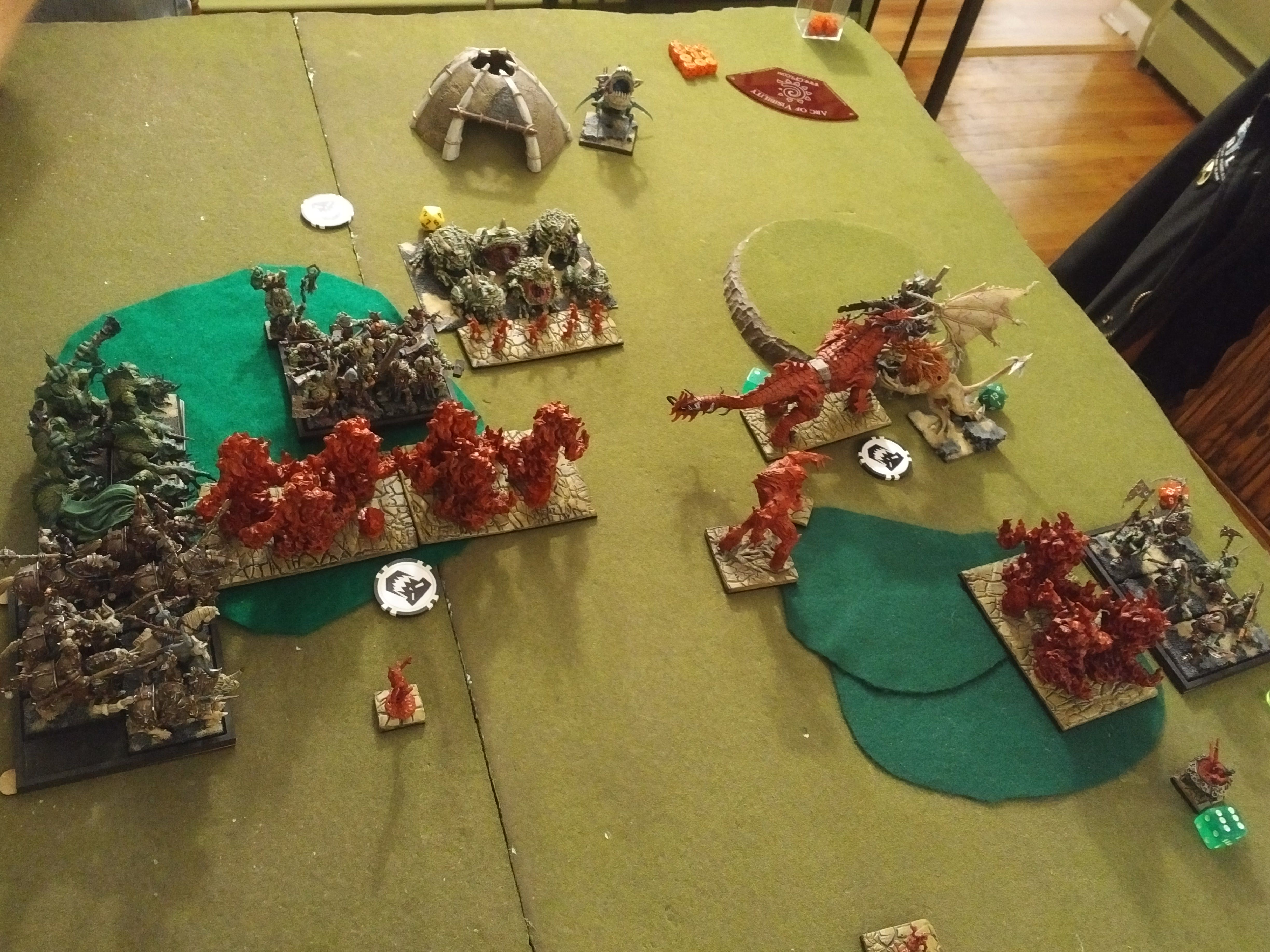 Varangur 5, in which everything thats left is CS2-3 and busily wrecking red things. Mounted Sons + Trolls flank and obliterate one of the central Fire hordes (31 damage total), the Direfangs get to see combat (annoying Sprites are devoured), and the Bash Bros tussle with the Ankyldon in a proper KAIJU BIG BATTLE: 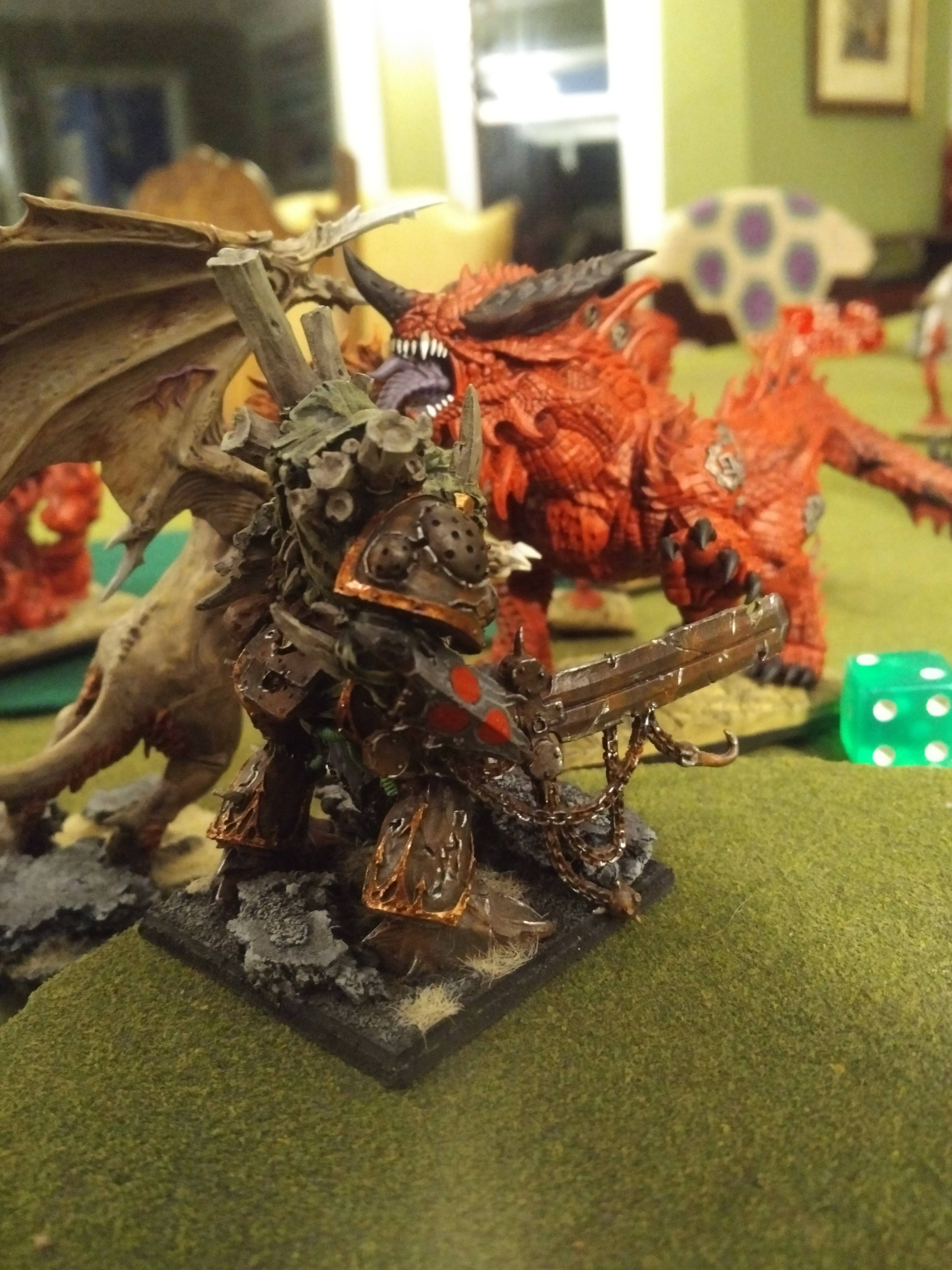 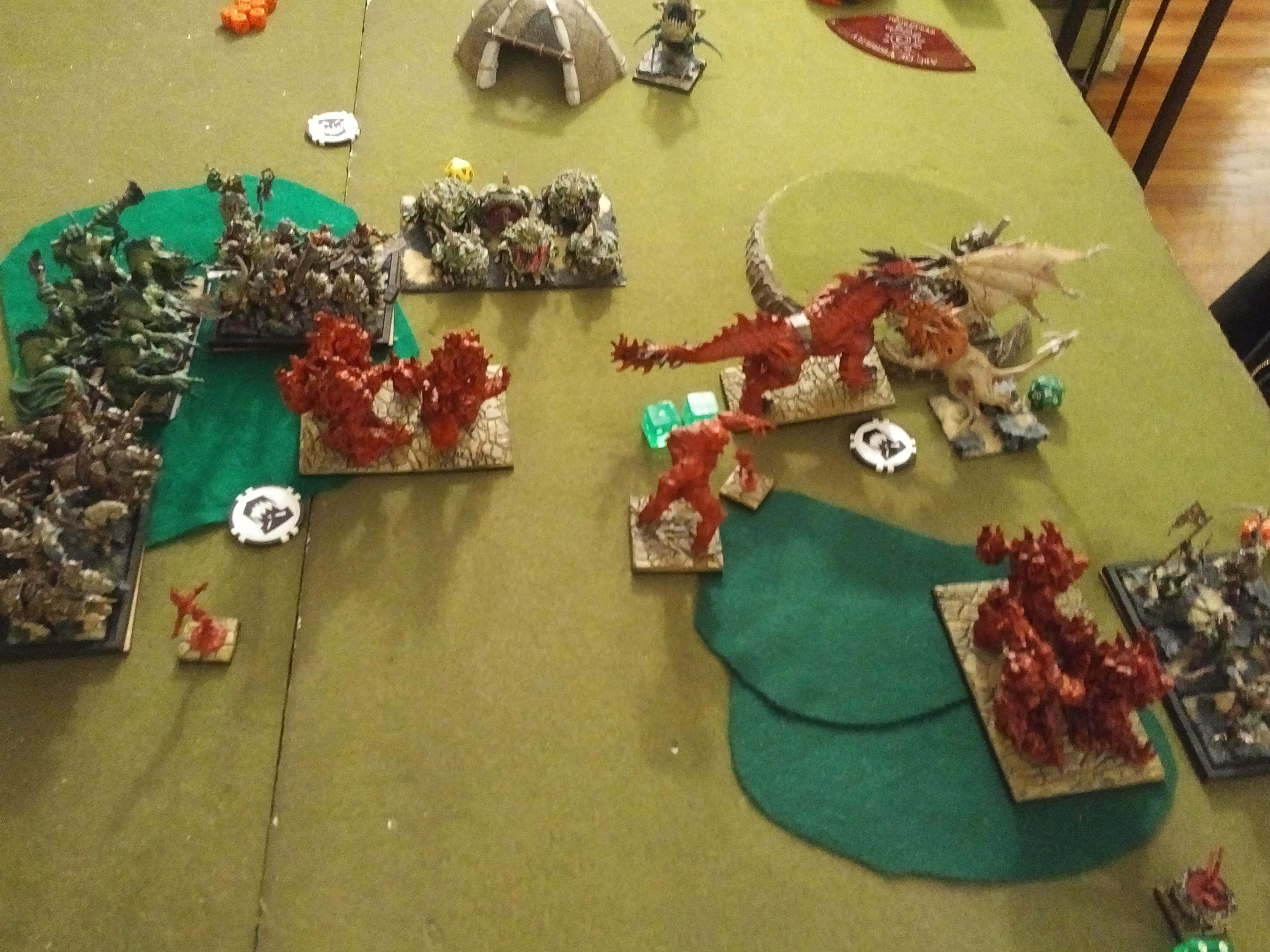 Which the ABP survives?! 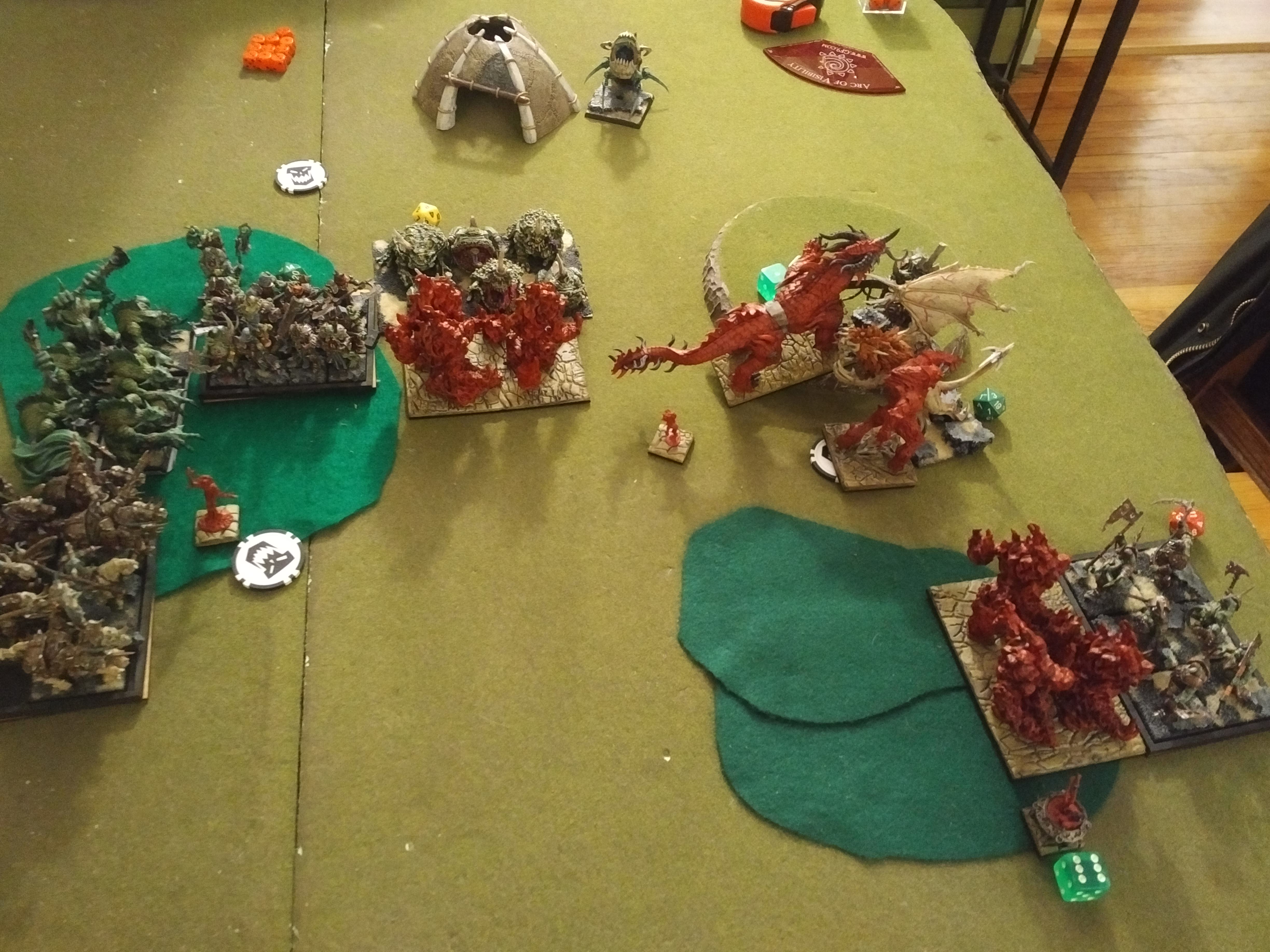 Stunned that this game is still a thing, Bloodfire desperately slam into units that are far scarier than they. AND KAIJU BIG BATTLE INTENSIFIES: 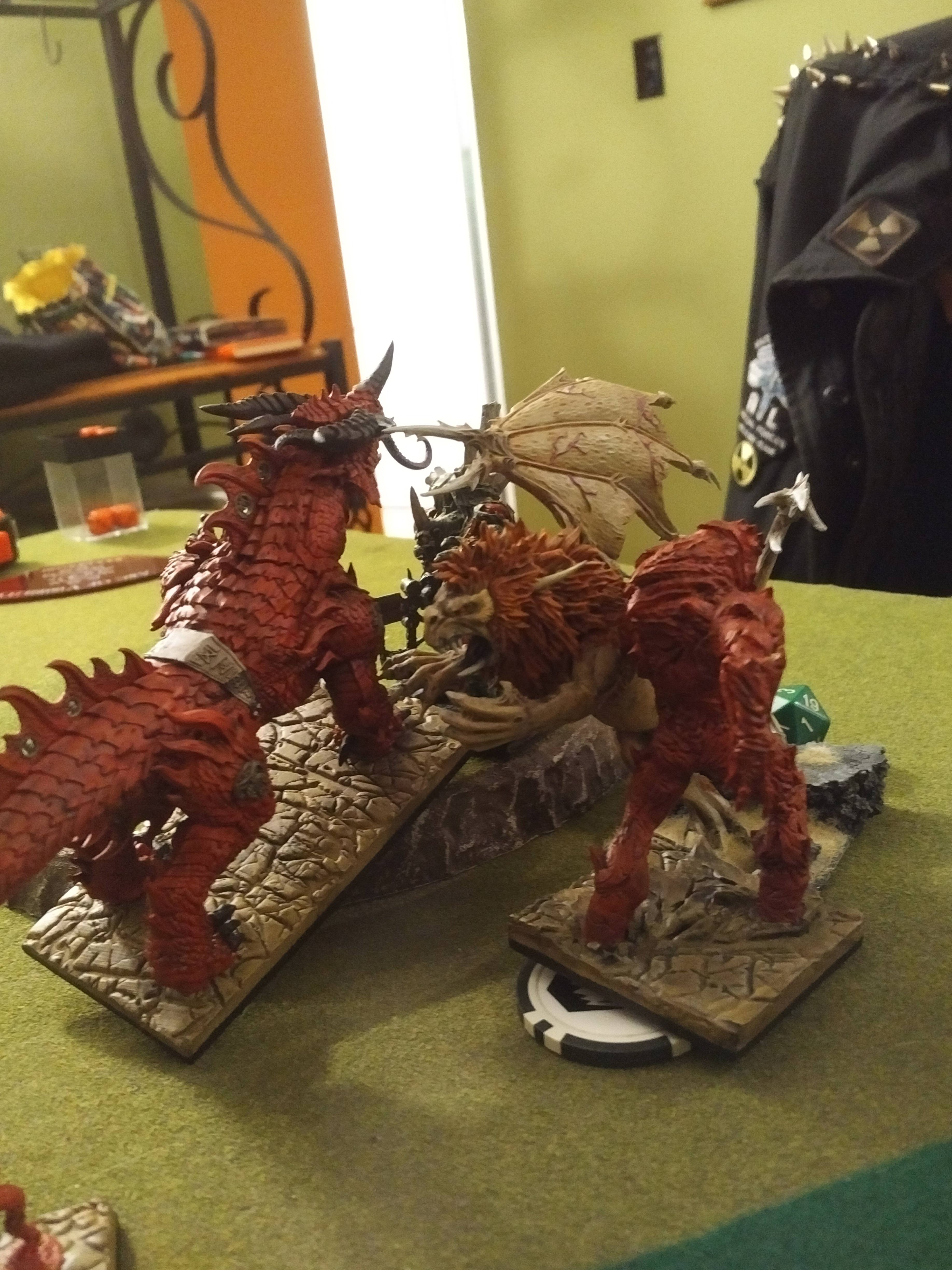 Direfangs explode at a Fire hordes caress (thanks to 8 wounds of Sprite chip damage), the Fallen are vaporized a turn too late, the Void Lurker is barely grounded by the ABP, and the King likewise takes token wounds from the hindered CLOFD, fighting way above his weight class. 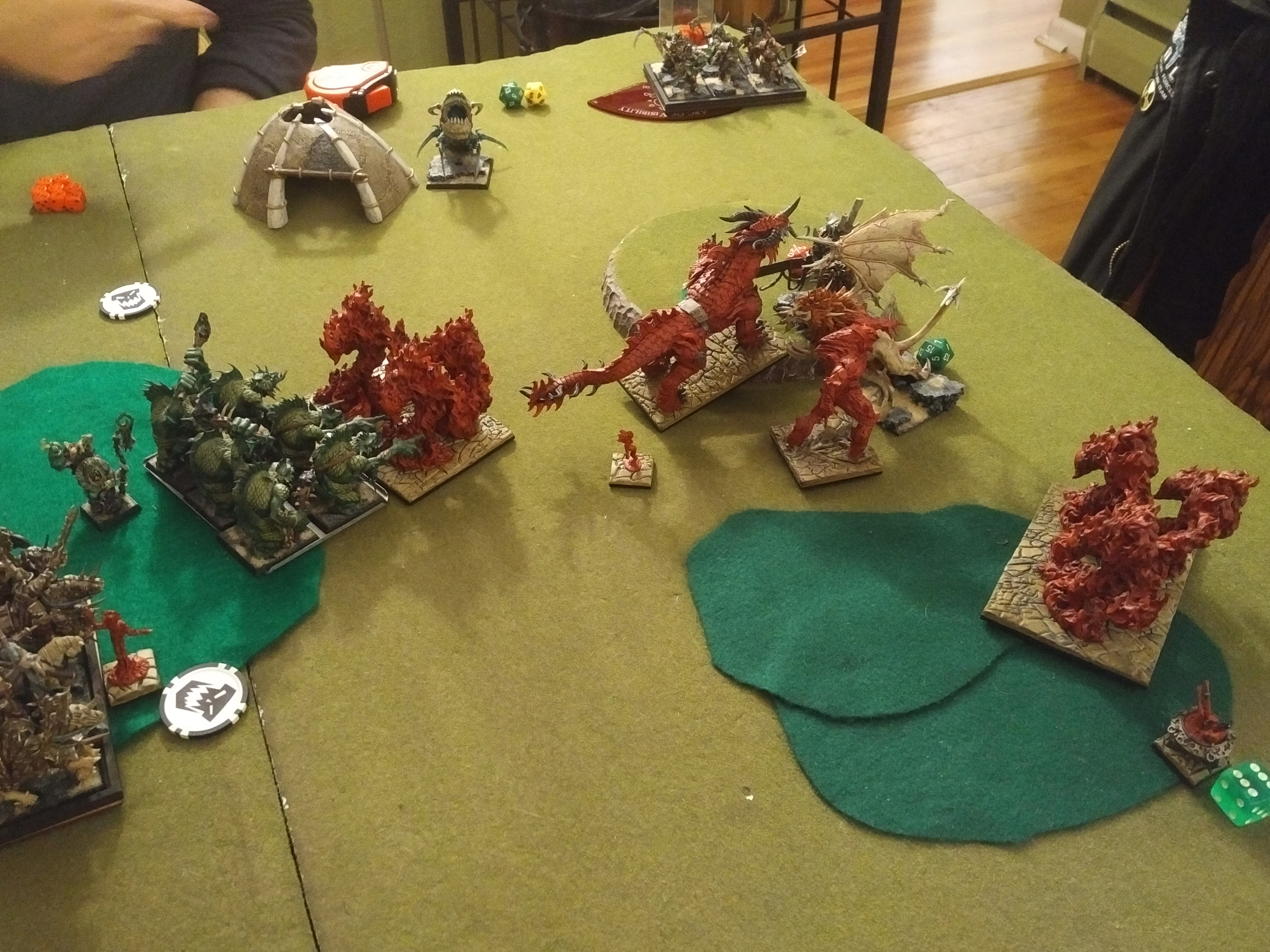 Cave Trolls slam into the rampaging central Fire horde as the big boys counter-charge their targets. Loads of damage is applied to the horde and the Clan Lord, but thankfully nobody cares – and obvs the Akylodon is cool. 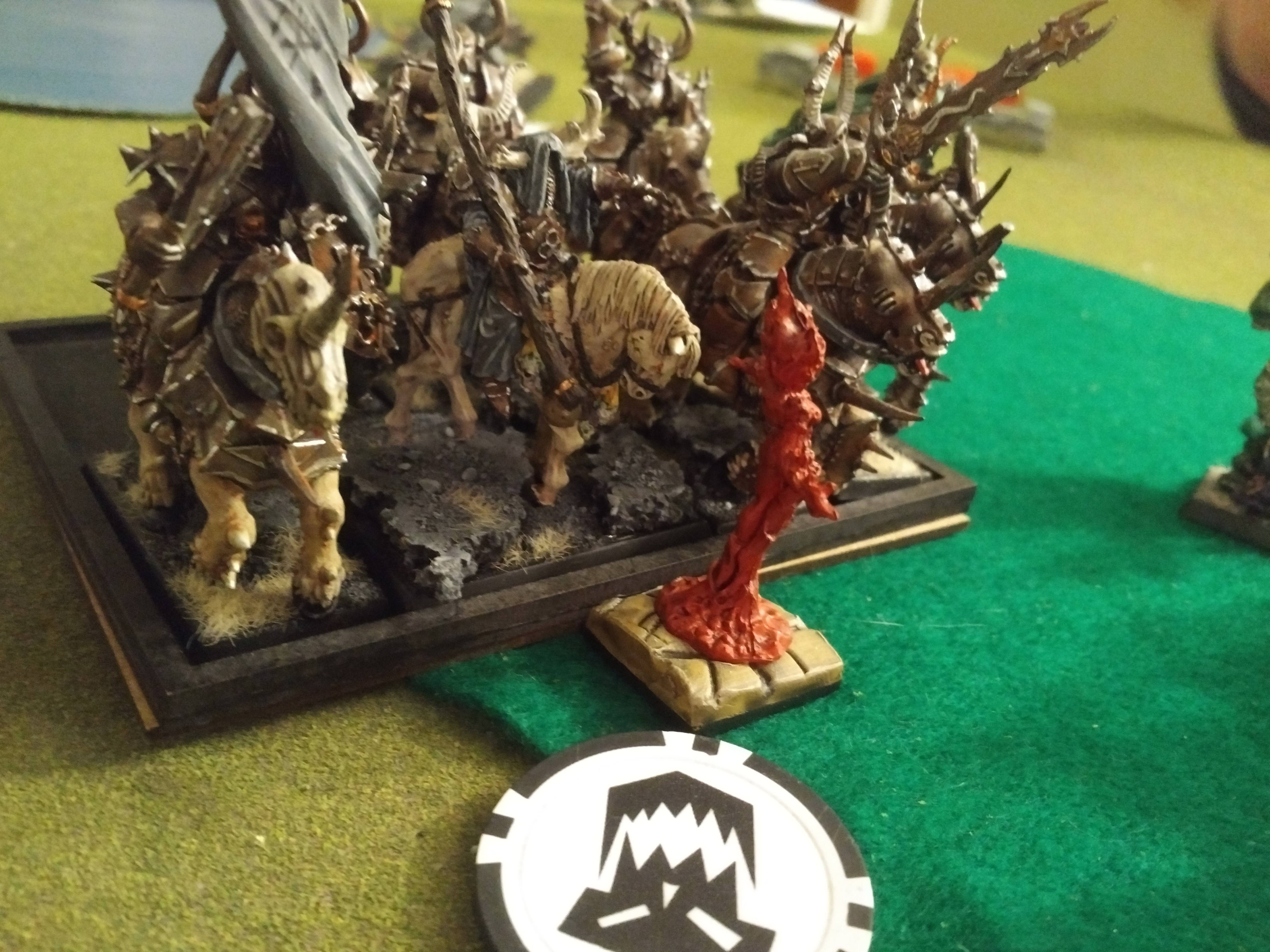 Oh, Inspiring Mage-Priest is run down by the mobile blender 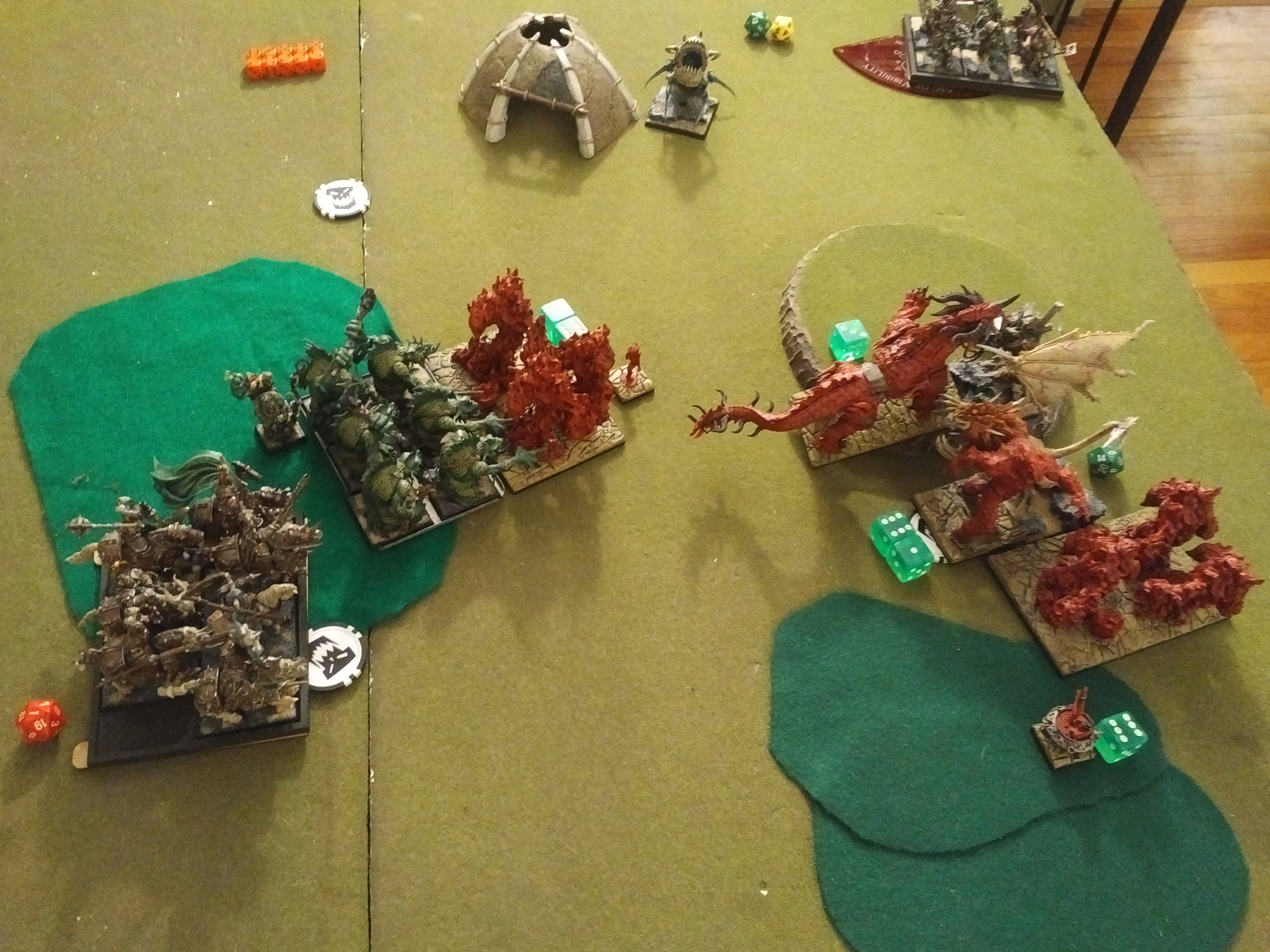 Sally 6 sees the King finally fall to an ocean of Fire Elemental attaks, along with the ABP patting the Lurker and the Fire horde being well aware of having nothing on the Trolls in a grind. 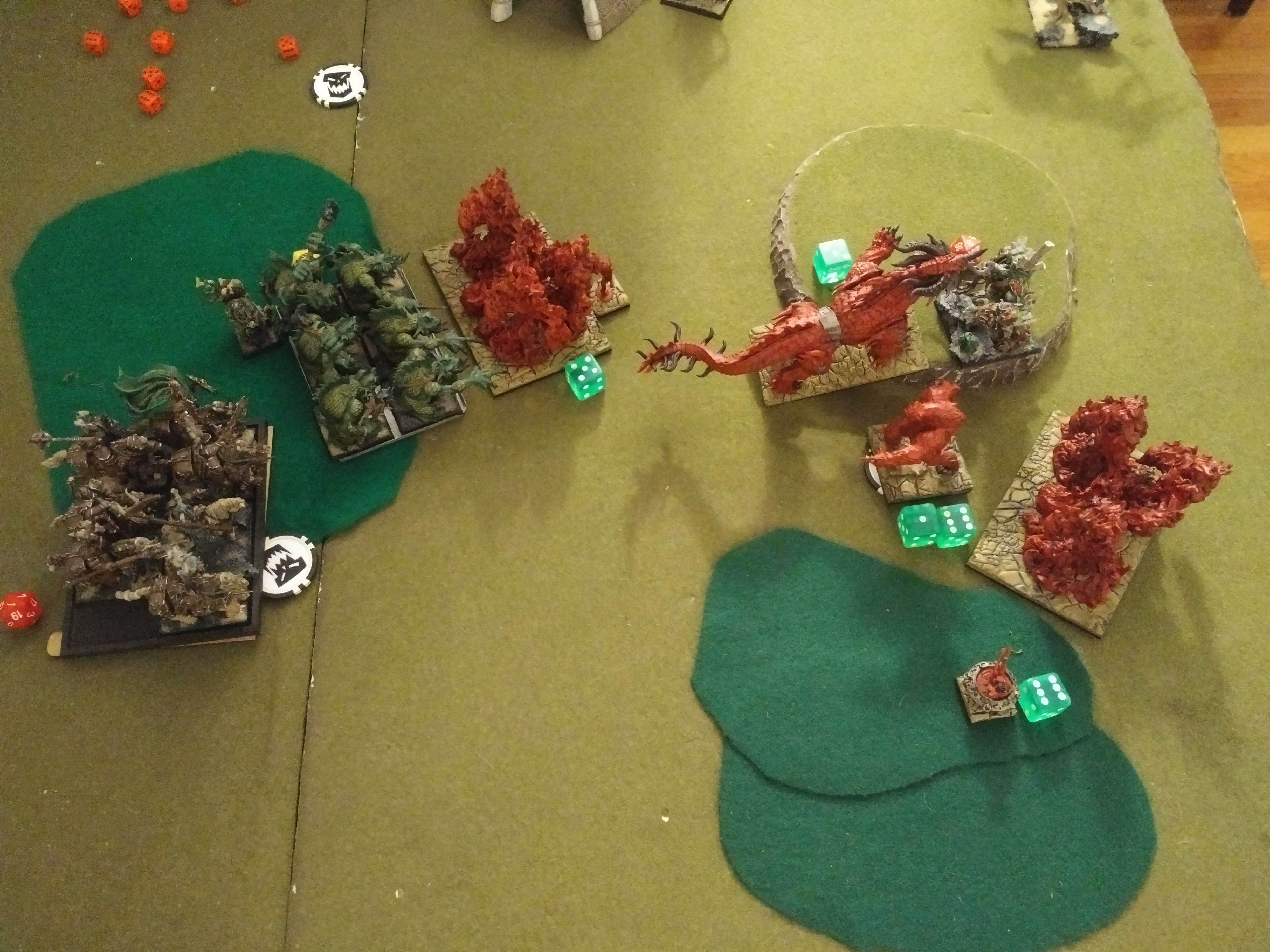 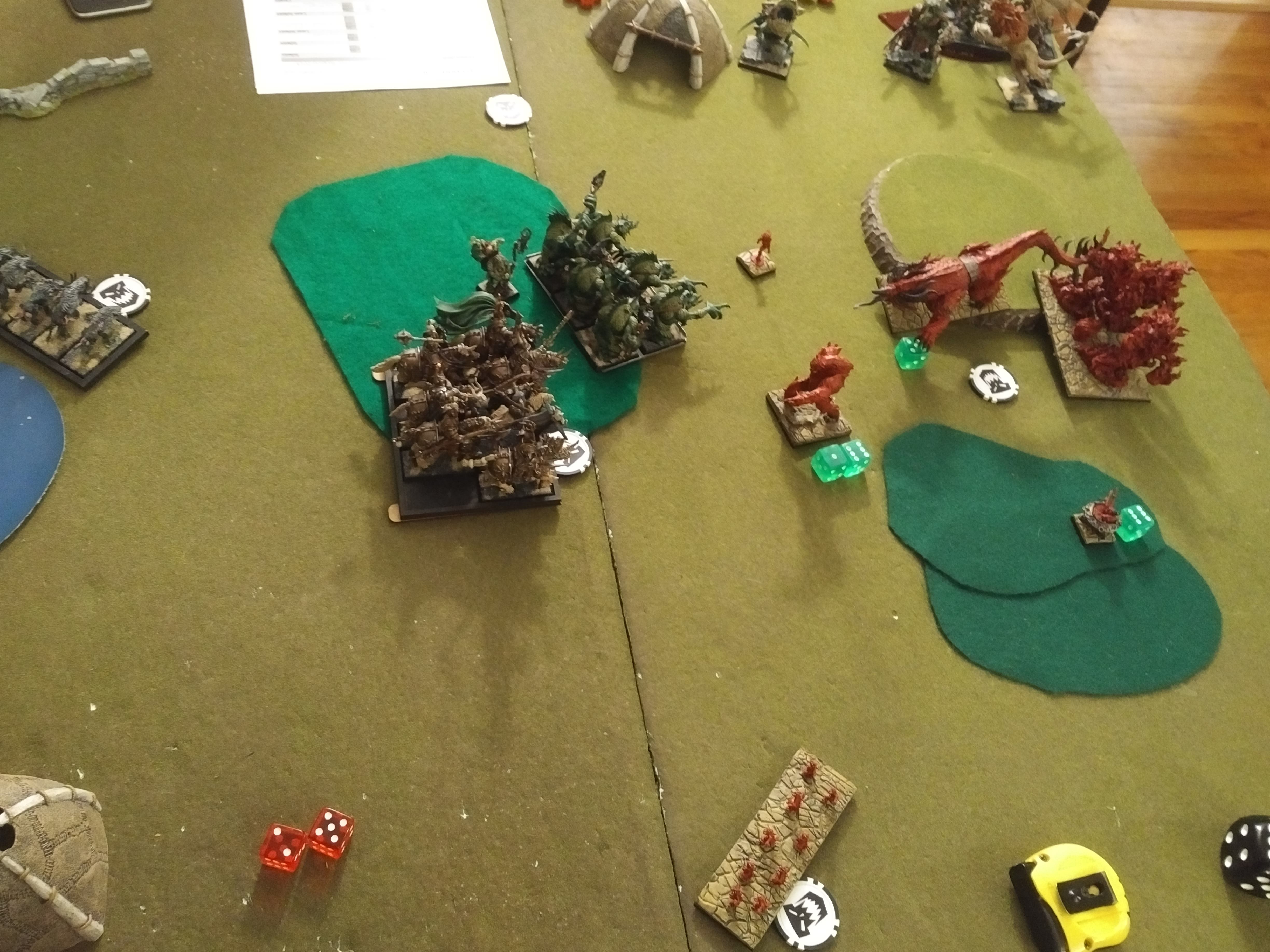 Cave Trolls pulverize their Fire horde and the Void Lurker fluffs against the Don. Sitting on 3 objectives – remember those Spectres? Theyve been parked on an objective far away all game, and the Wolves who miraculously survived are claiming another – the Varangur are content to see what the Bloodfire has left.

Shot of the end. The last Fire horde again sweeps into a monsters flank and burns it to embers, more than securing one objective, making it 3:2 in the Varangrr favor. The only way to draw at this point is to hope for ridiculous dice and pop both the Trolls and the Mounted Sons from basically no damage to 19 nerve. CLOFD + Sprites take on the Sons and the Crown Priest goes for the Trolls, but 5+ then 5+ is way too much to ask for and thats game.

As an aside, Im realizing after the fact how important of a flub not killing those Wolves was. Photo shows I only did 4 wounds, which made sense that I couldnt roll the 9 to pop them  except I should have done 7-8 wounds. Which means a 5-6 to rout, which is far more likely (72%+), and would have starved the Varangur for an objective grabber and pulled something away from the center, giving me a better shot at fighting for the draw by nuking a single target. Which in Pillage style games is all Im trying to do in most cases.

Lets forget how atrocious my dice were during those desperation shots at the end, which wouldnt have done anything to a single target, let alone two :X