Final round up against our TO Jesse, a dude I knew from Master Crafted Gaming batreps (https://www.youtube.com/channel/UCpUodTbAv0XfqvwwG2cBHuA/videos?disable_polymer=1) and who my clubmates ran into at Keystone GT not too long ago. All around great/funny guy playing a balanced and unexpectedly strong Ogre list.

Third round was Occupy, with Sallies once more going first! Shamble army says yes please! (Admittedly going first wasnt the best idea in 2/3 of these matchups, but as they all involved moving I was happy to oblige.) 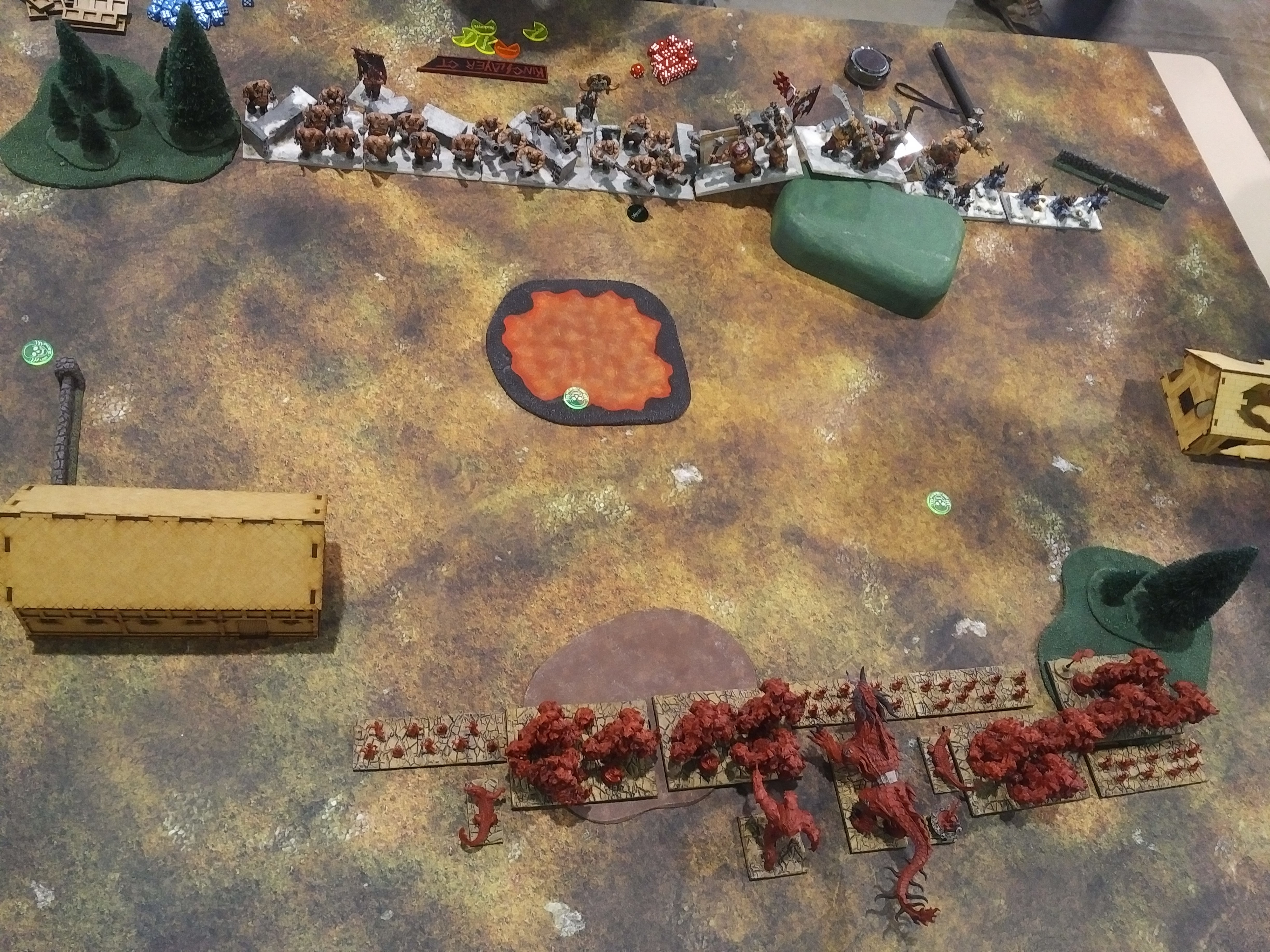 Deployment is central-right, with the left objective ignored. I thought about sending some Sprites to grab it late game, but decided Id rather they did something in the game itself. Griffin Bearer is the double flag behind the Siege Breakers. 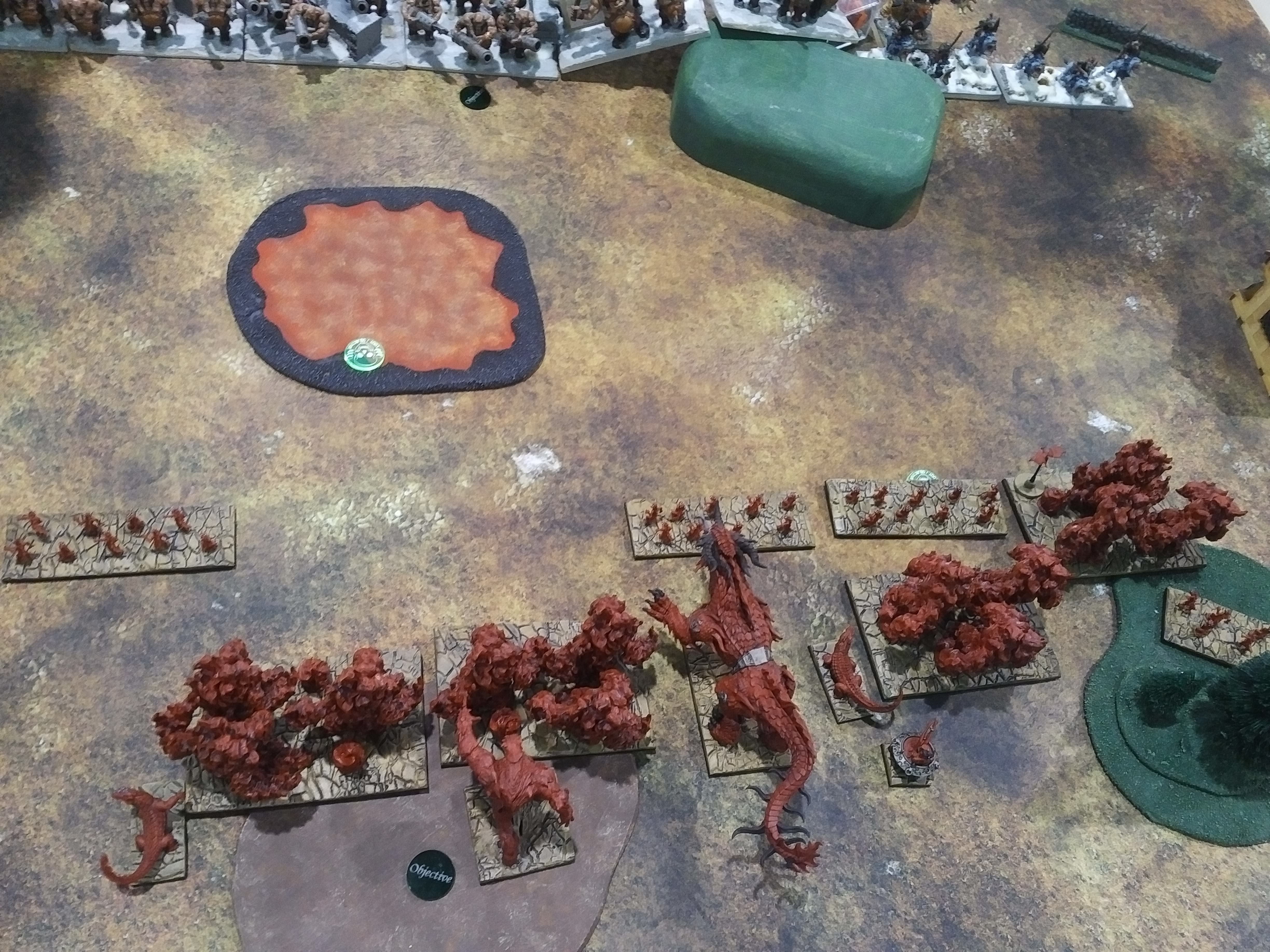 The red wall trundles forward. I expected him to clear chaff next turn, plus was curious what hed do with his Scouts on the right. 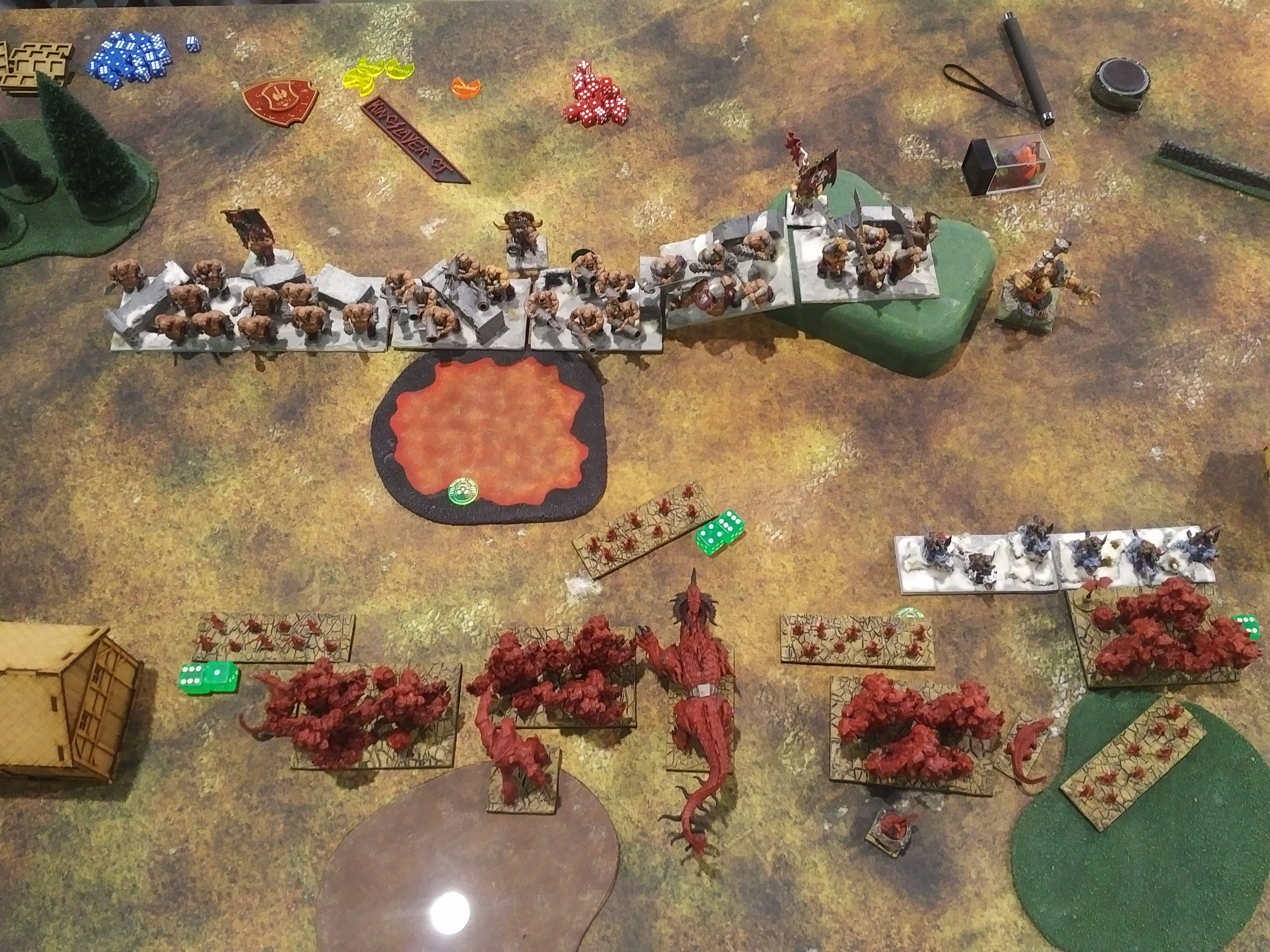 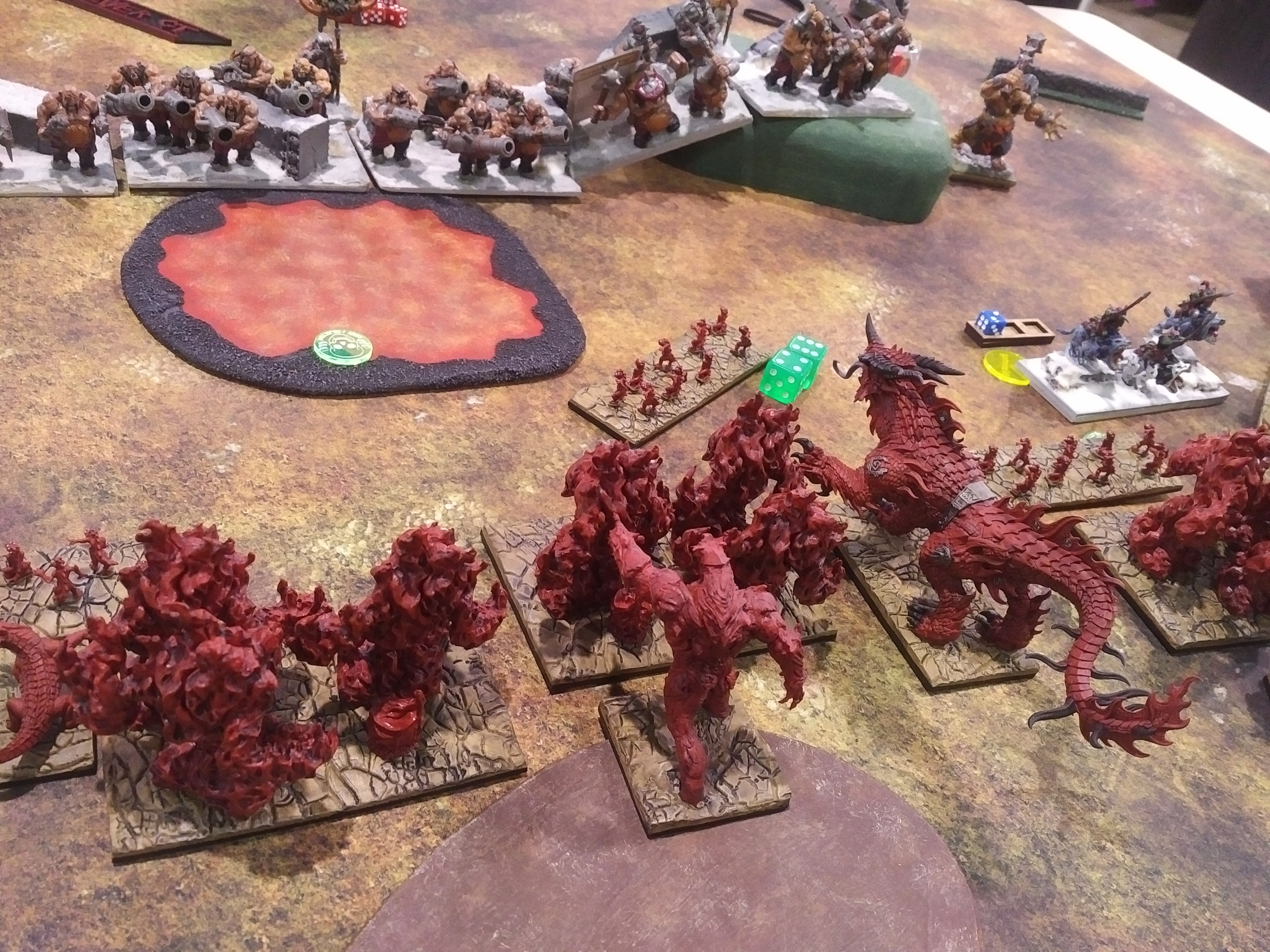 Largely stuck in the center, the only real action is on the right, where one unit of Scouts is baked to death by the speedy Fire horde and the other is wavered by Sprite shooting. The speedy horde is healed a bunch, and the left Boomers suffer the CLOFDs breath, though without even being wavered. 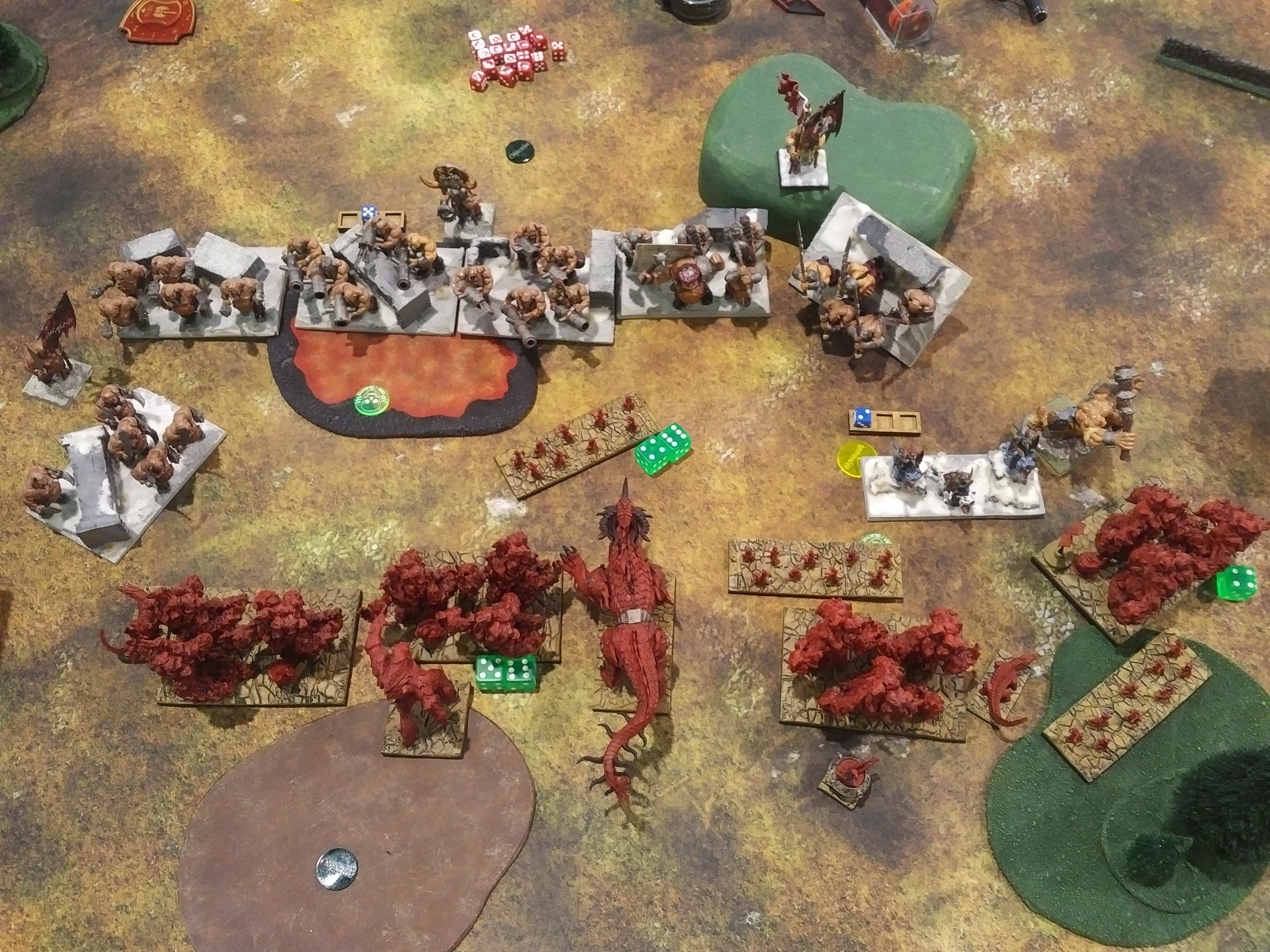 The Ogres continue to press the issue, getting the Boomers closer while setting up traps should the red hordes get stuck. The Giant goes aggro and bops a couple wounds on the speedy Fire horde but whatever. Shortly before which one unit of Boomers clears out the left Sprites, and the other rips into the central Fire horde, shredding 11 damage into them (with 18 shots!). Thankfully they cant land the rerolled 7 to break them. Whew! 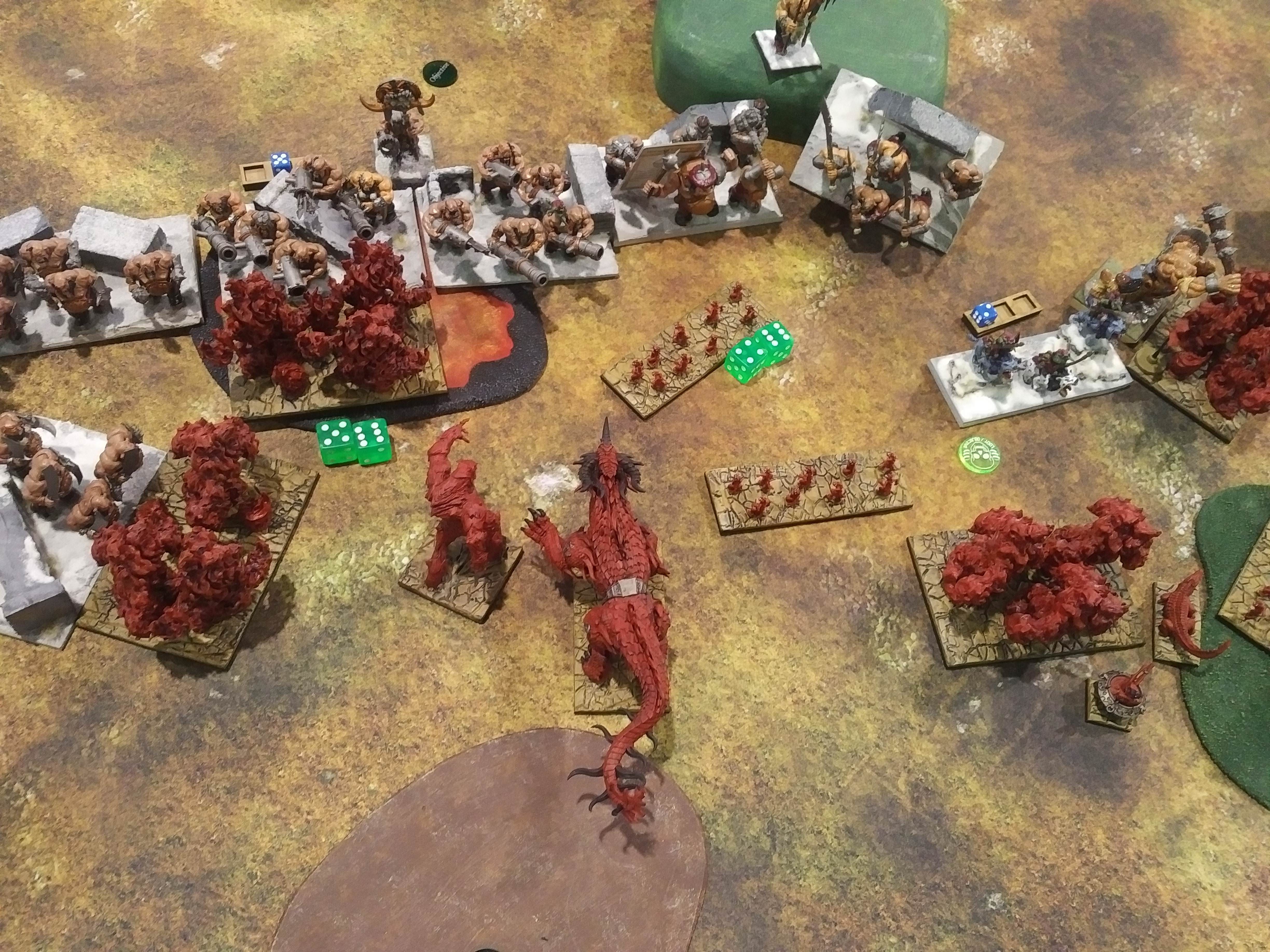 Suffering under the Boomer barrage and needing to act, the left Fire hordes power into Warriors and Boomers respectively, as the right Fire horde countercharges the Giant and Sprites get in the way of Siege Breakers. The Goblin Scouts were purposefully left alone this turn, so they would remain in the way of the Siege Breakers. 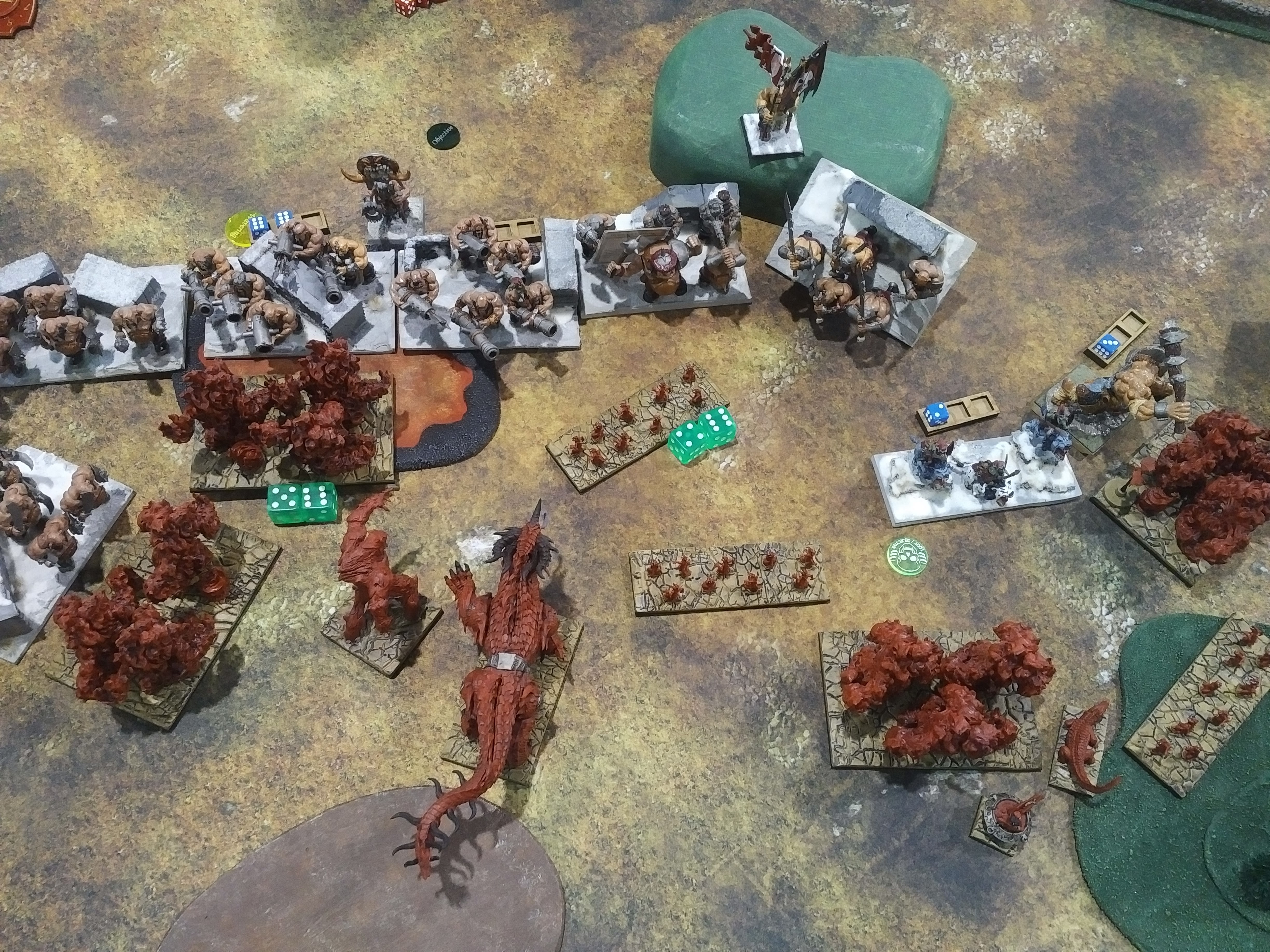 While damage is spread around – including breath attaks into the right Boomers – nothing results save for wavering the left Boomers. 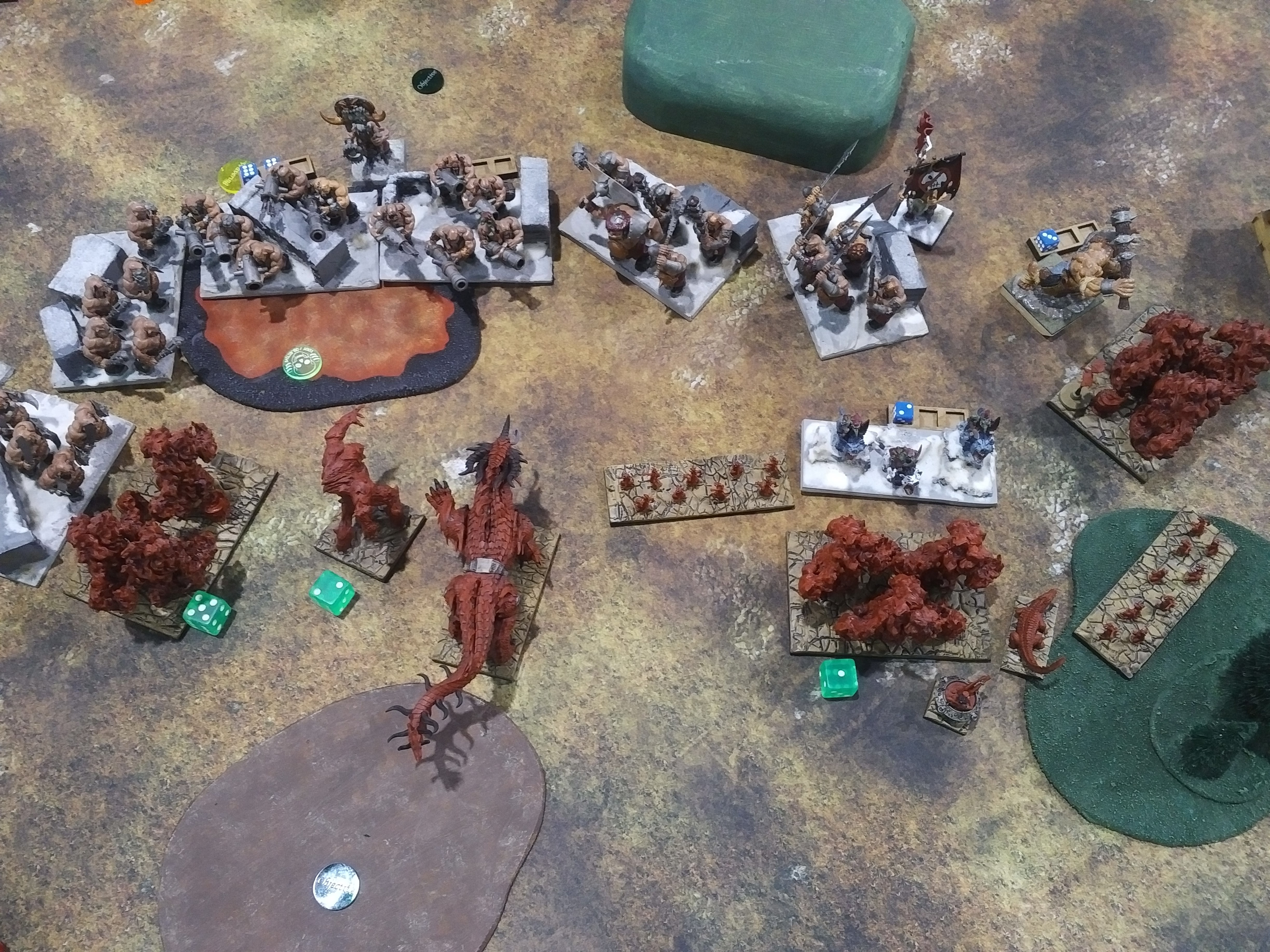 The Ogres keep the mayhem going: Warriors countercharge the left Fire horde, more Warriors flank the deeply-wounded central horde, Scouts pounce on the third horde and the Giant countercharges the speedy horde. While the central Fire horde predictably goes down, damage is otherwise relatively light, with the Giant completely fluffing. The CLOFD cops a couple wounds from the right Boomers as well. 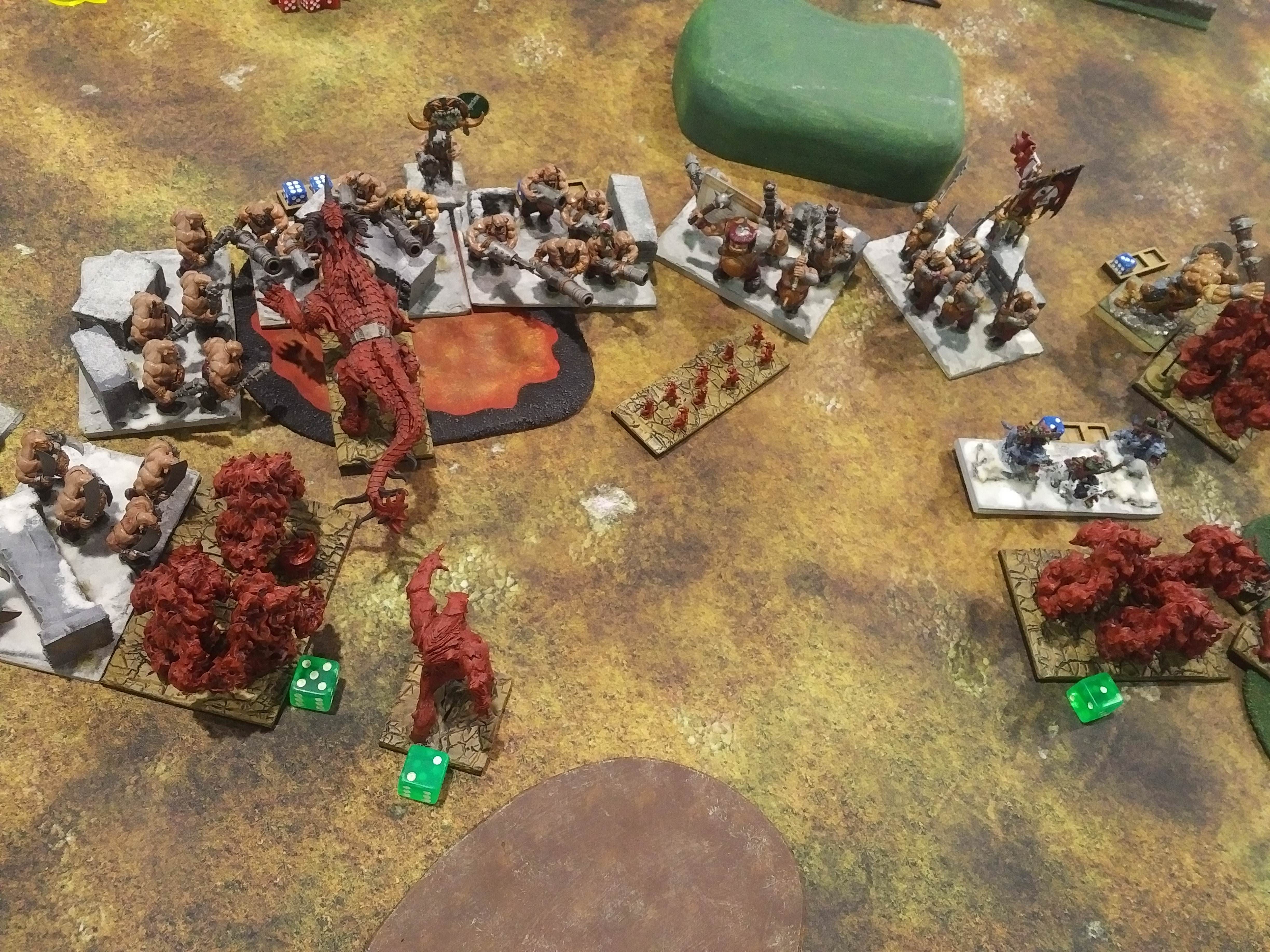 More fighting! The left and right Fire hordes countercharge their dance partners, though the third horde chooses not to countercharge the Scouts, to keep them in between the Breakers for another turn (this was an overthinking mistake on my part). The riskiest move was sending the Ankylodon into the wounded Boomers, as I was relying on 8 hindered attaks to land at least one wound and pop the Boomers, allowing the ABP to reform and not be flanked by things with CS that hit good. The plan also required at least wavering the other Boomer horde with shooting, which thankfully the CLOFD + Sprites were able to do, despite hitting on 5+. Combats work out, with the Boomers and Warrior both dying. The Giant is wavered but Fury dont care. And the Scouts gumming up the right flank are wavered from shooting (I guess I hoped to clear and charge in my next turn? However charging now and charging then would have worked too).

Around this time the Diadem Herald had worked his way around the left flank, incinerating the leftmost Army Standard ❤ 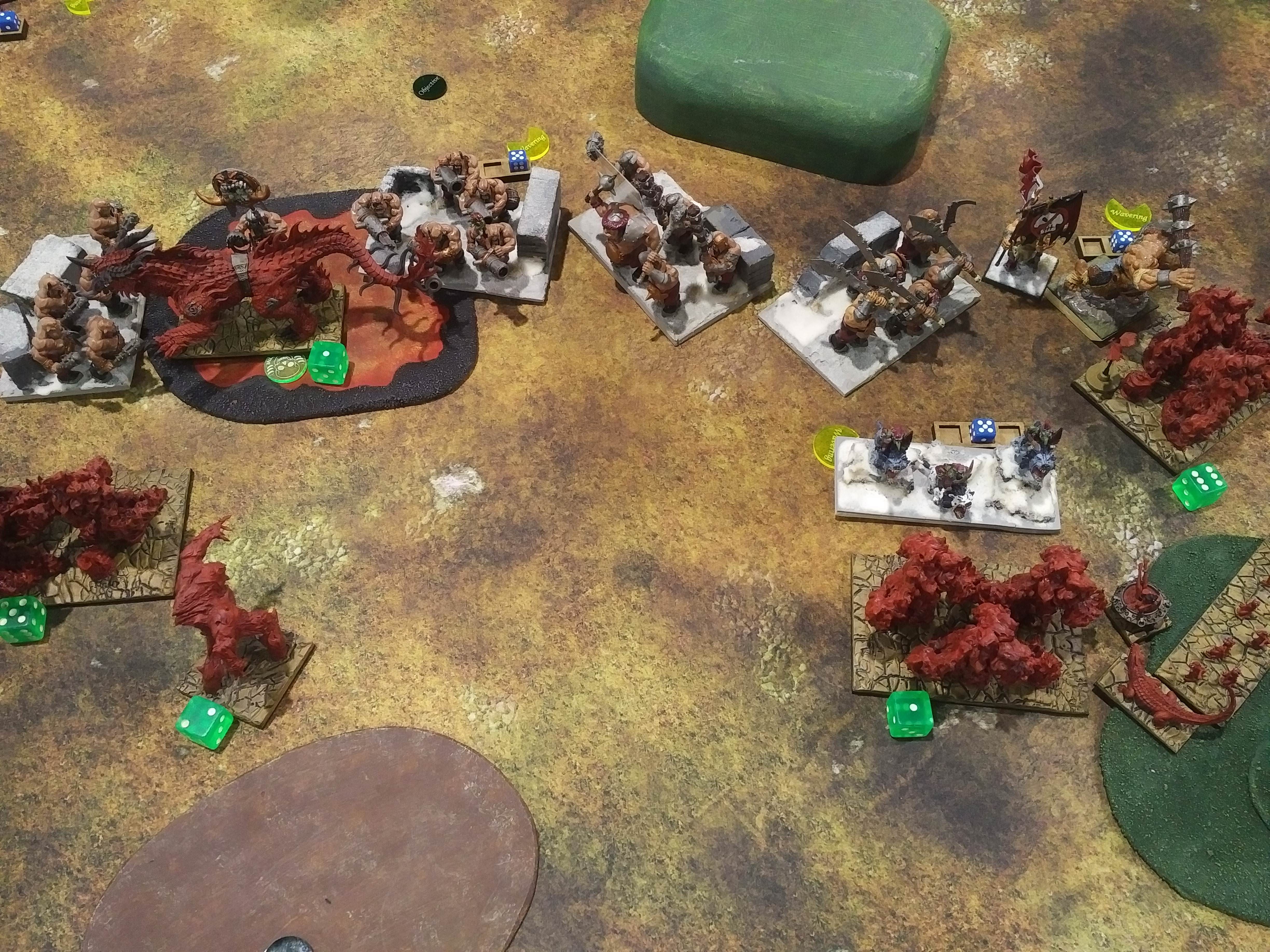 Hindered Warriors and Army Standard hit the Ankylodon, doing two points of damage, of which the big beastie heals one from Iron Resolve. On the right the Giant figures out how clubs work and hammers the speedy Horde but no lucky rout. 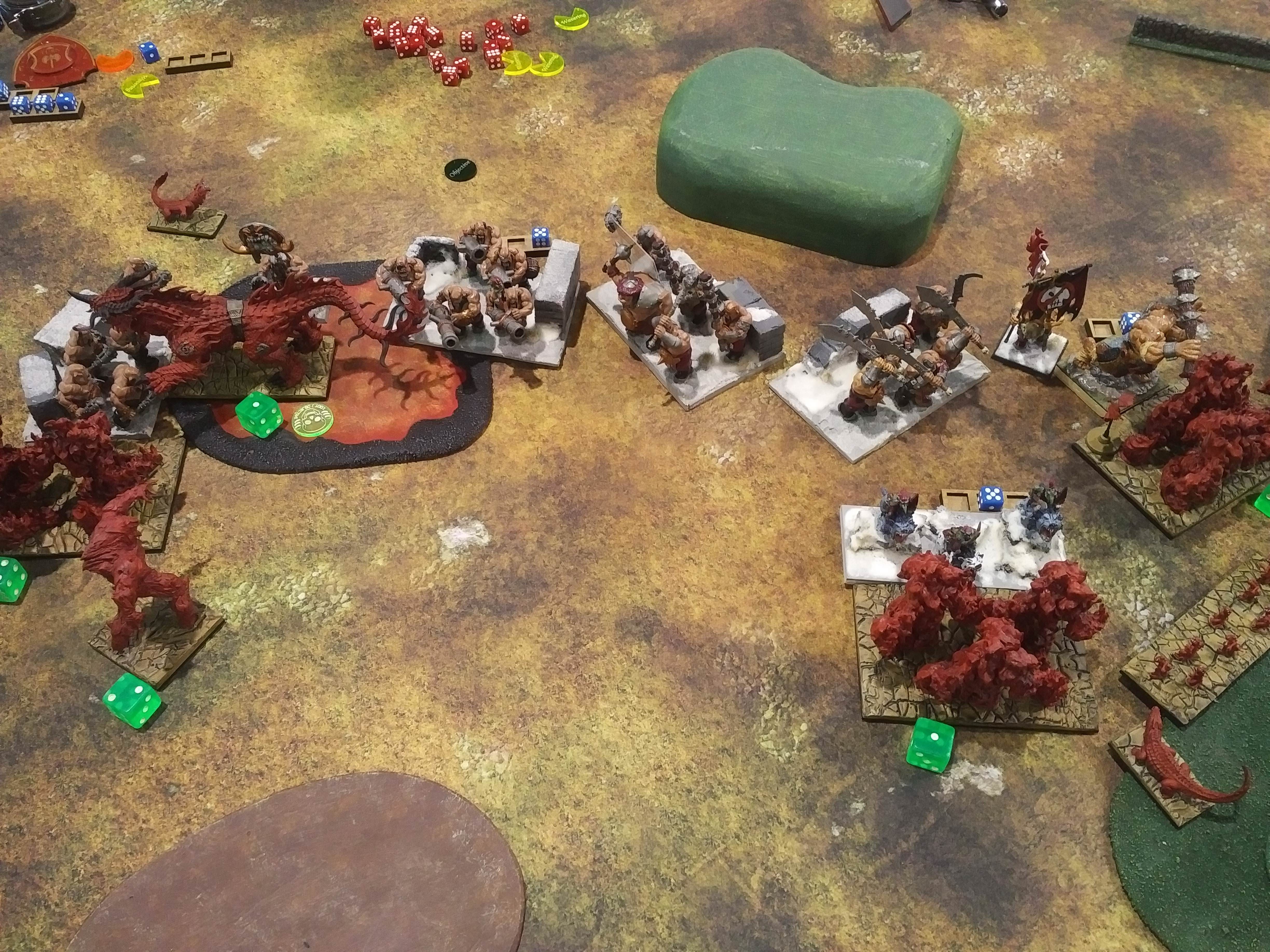 The Sallies turn the heat up and brutalize the Ogre army, with the left Warriors disappearing under a Fire horde flank attak (the Ankylodon helped), the Giant burned to cinders and the Scouts finally ended, forcing the Breakers over there to make a choice. Happily the Boomers are also routed, thanks to a sterling round of vomit from the CLOFD. 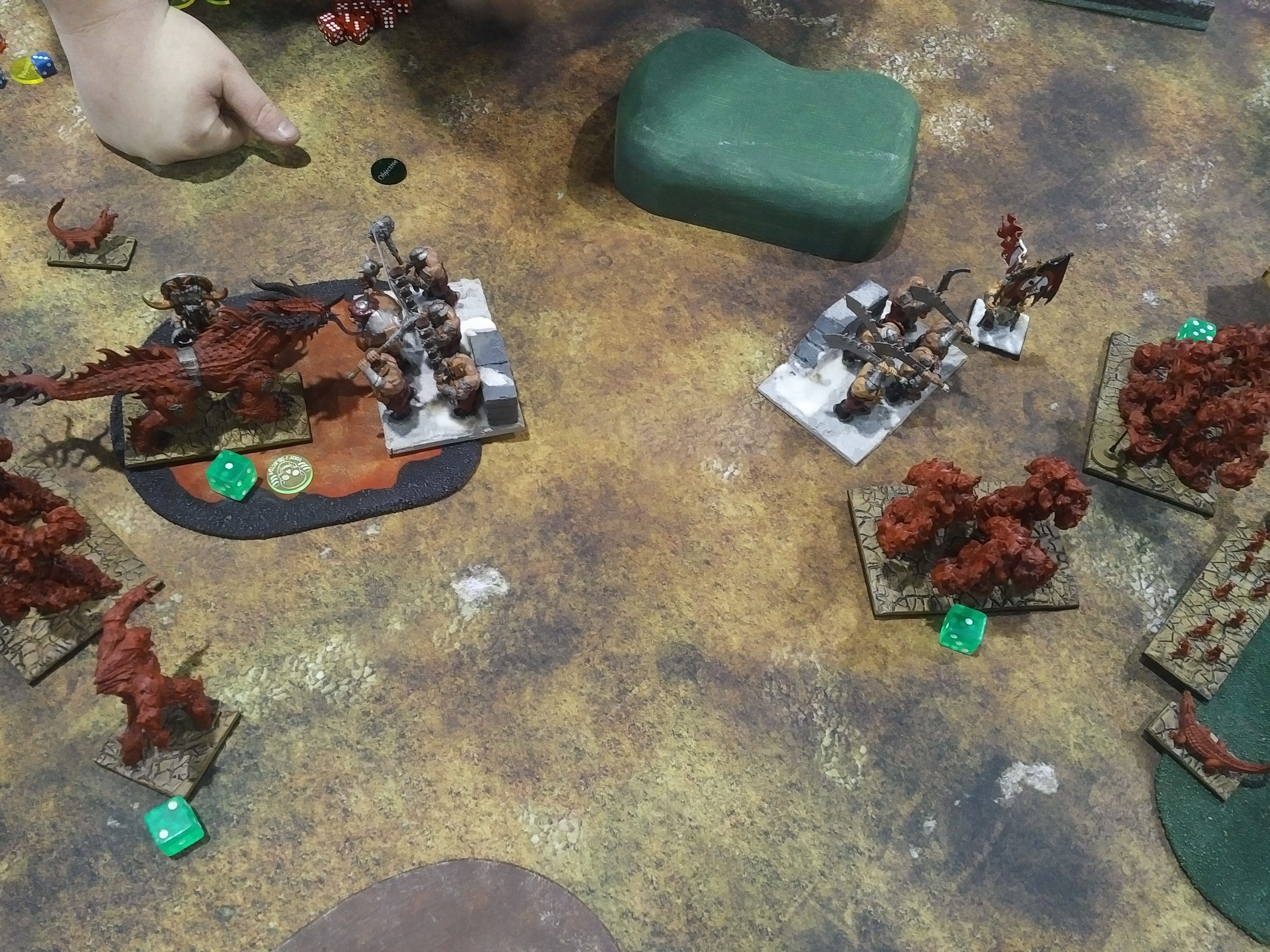 At this point things feel pretty great. Its Turn 5, with just two Siege Breaker hordes and two Army Standards left up against a lot more red than Im used to. Clearly I didnt know what Siege Breakers are capable of O_O

Cat Siege Breakers charge the Ankylodon and the less-wounded Fire horde on the right, with their Army Standards flanking the Ankylodon and blocking the rightmost Fire horde. While the ABP takes 7 wounds, hes able to survive the rout test. This is not the case for the Fire horde, which is absolutely jellied in one go. 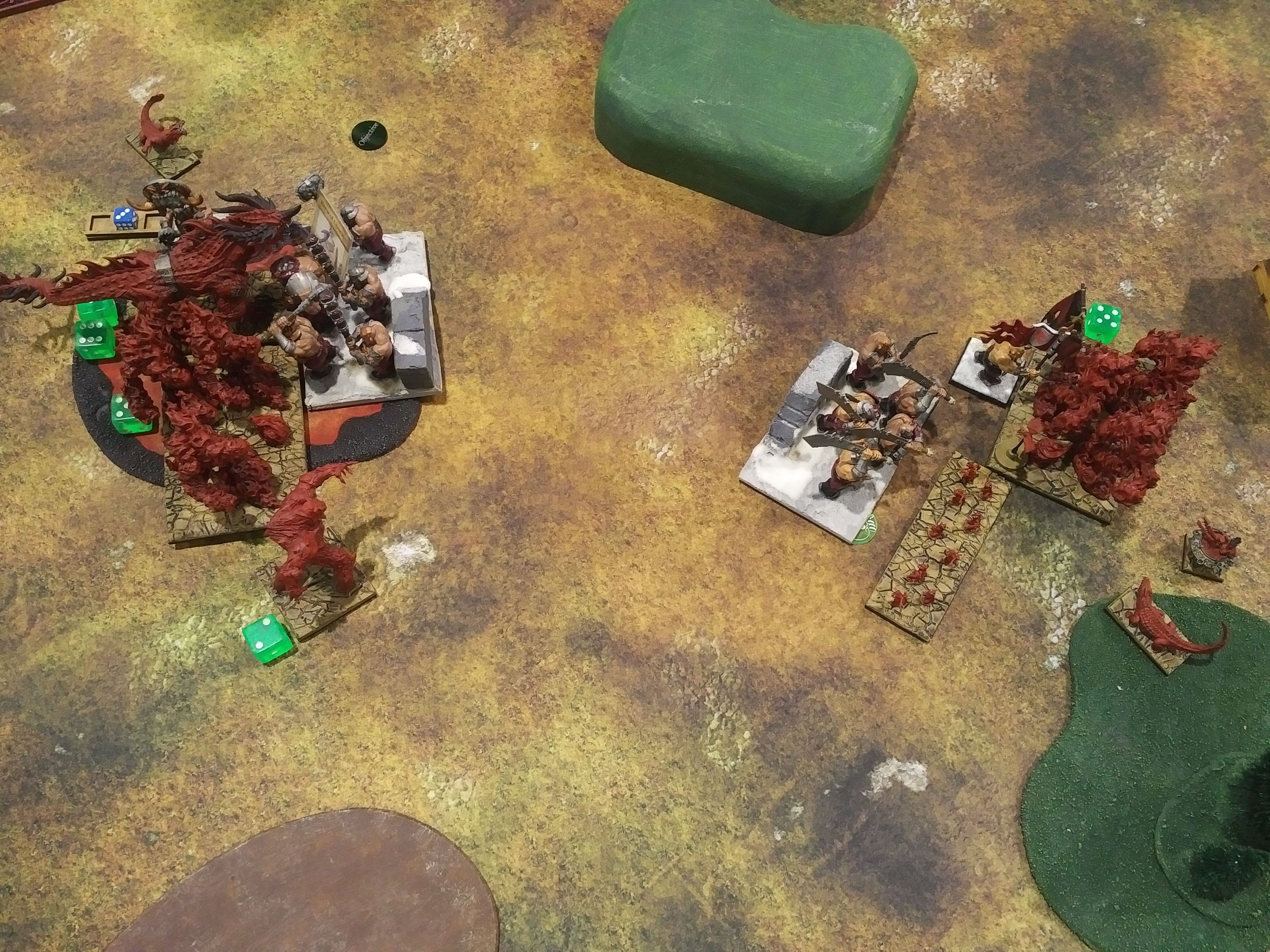 Sally 6 is a scramble that has the left Siege Breakers slammed by Ankylodon + Fire while the right Siege Breakers are fed some Sprites to keep them occupied (and available to be shot). The Diadem Herald is only able to waver the left Breakers Army Standard, meaning that despite taking 11 points of damage the central Breakers dont go down. On the right, breath from the CLOFD + Sprites is unable to dent the other Breakers, and the Fire horde only wavers their Army Standard in combat. 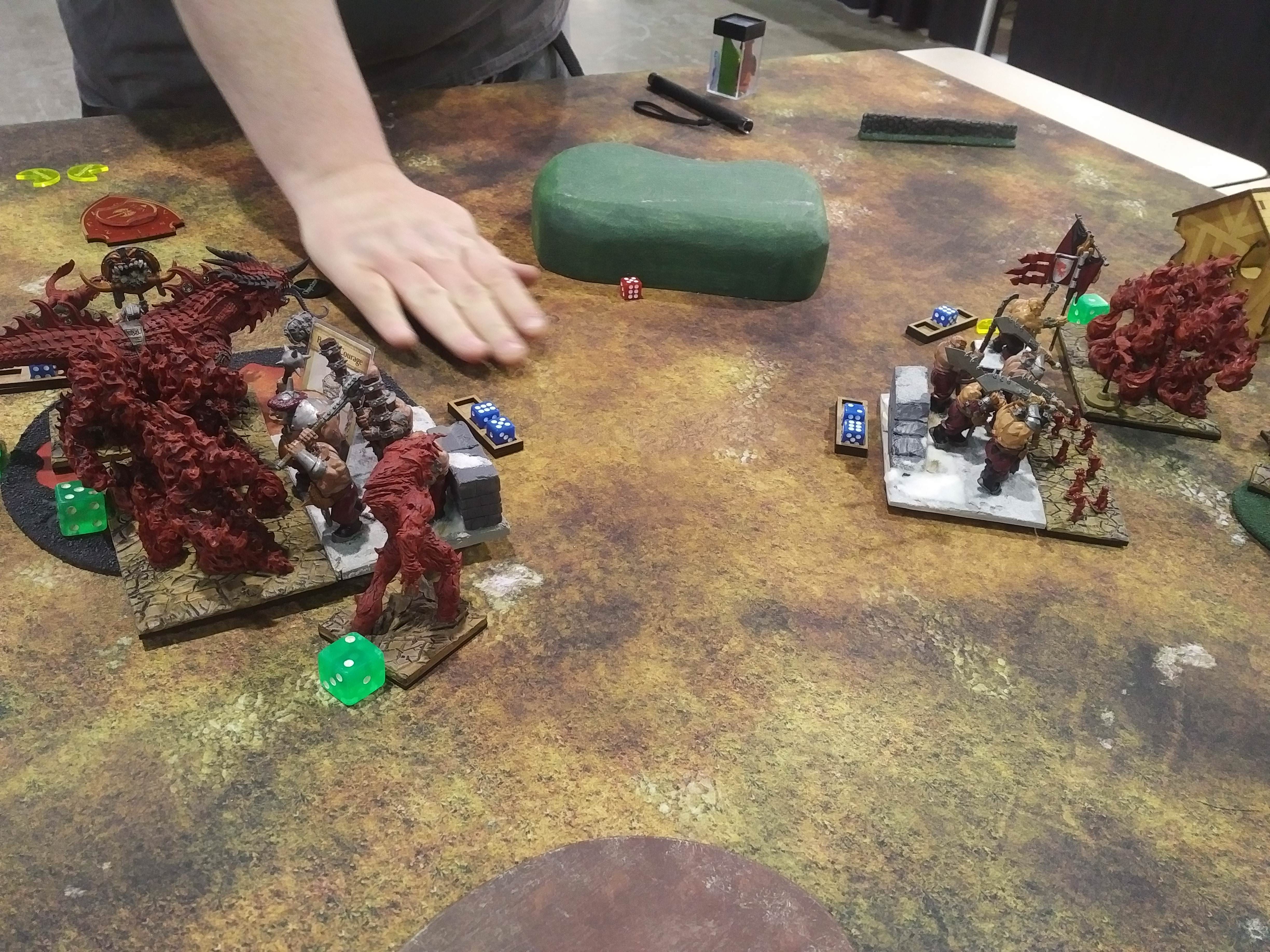 All told three good games, and Im always happy to go 50%. Mantic provided prizes for the top three, which included me! I walked away with a Forge Father Sturnhammer, which Im actually very excited to use as an APC in Necromunda. Though thats a topic for another batrep thread . . .