Another round, another clubmate. In this case Senator Rossi, who I havent played in over a year Id reckon?

There are 45 spare points, which Im guessing were items on the Ironclad and the Brock Riders, as there are plenty of good ones they might have had. Anyway props to Rossi on sticking with Dwarfs and trying to make mostly-infantry work – in the past hes done the gyrocopters as Elohi thing, and I know hes fighting against going back to that.

Second round was Push, with Sallies going first again. 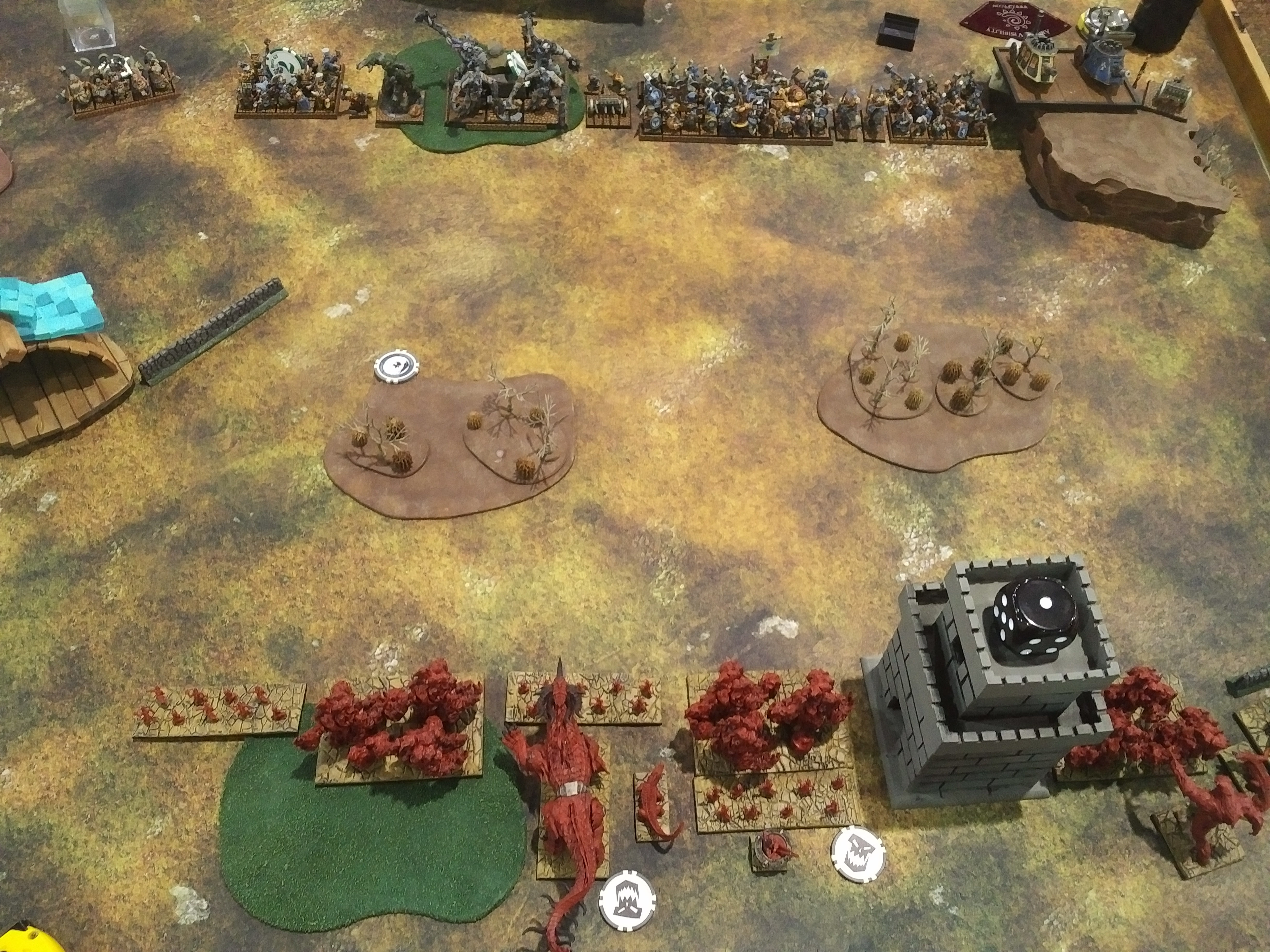 Deployment sees a flank denied, as the Bloodfire does. Wondering how often its the left flank I ignore, because it seems like most of the time. Push tokens are on the left Ironguard, the Earth Elementals and the Ironclad; and the Ankylodon, central Earth Sprites, and rightmost Fire Elementals. 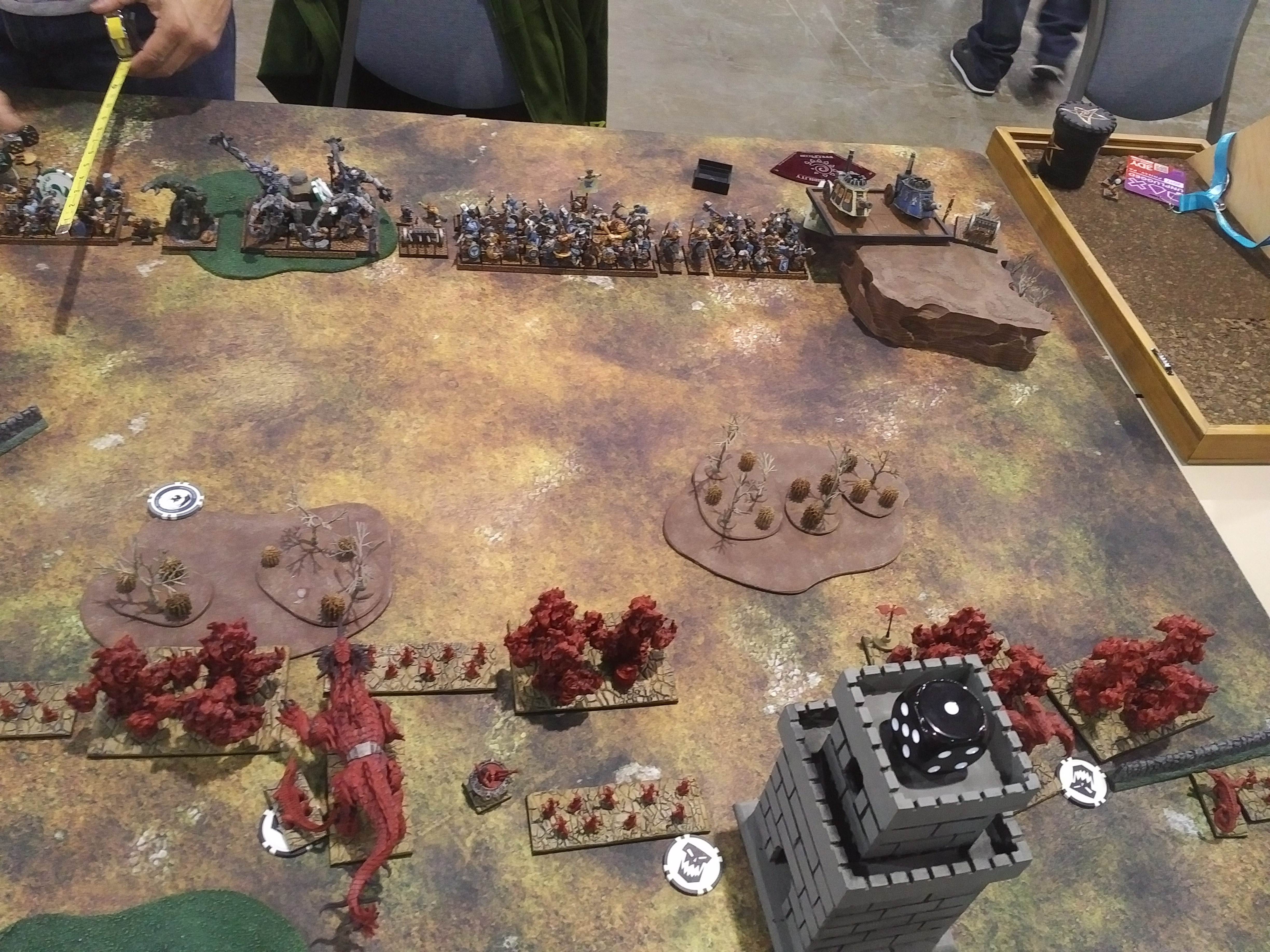 Roll out! Redementals scoot forward, trying to stick to cover where able. The central Fire horde is surged forward a few inches, because I already know theyre a target.

Dwarfs shuffle forward a bit, knowing theyre outpaced nearly across the board. And the Brocks hold still, not wanting to start absorbing breath damage when they dont need to. Organ Gun fire plinks off a couple wounds from the leading Fire hordes. 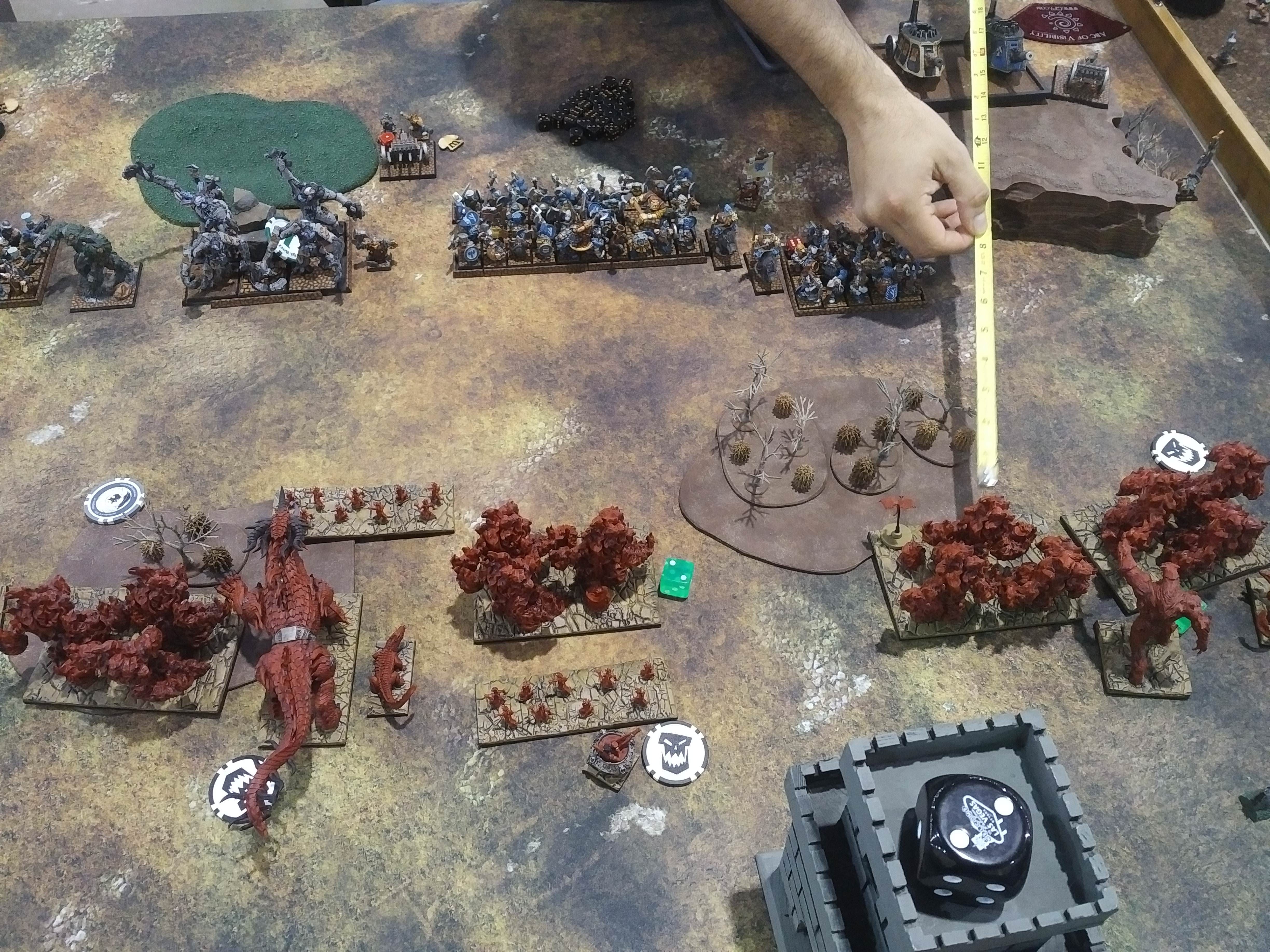 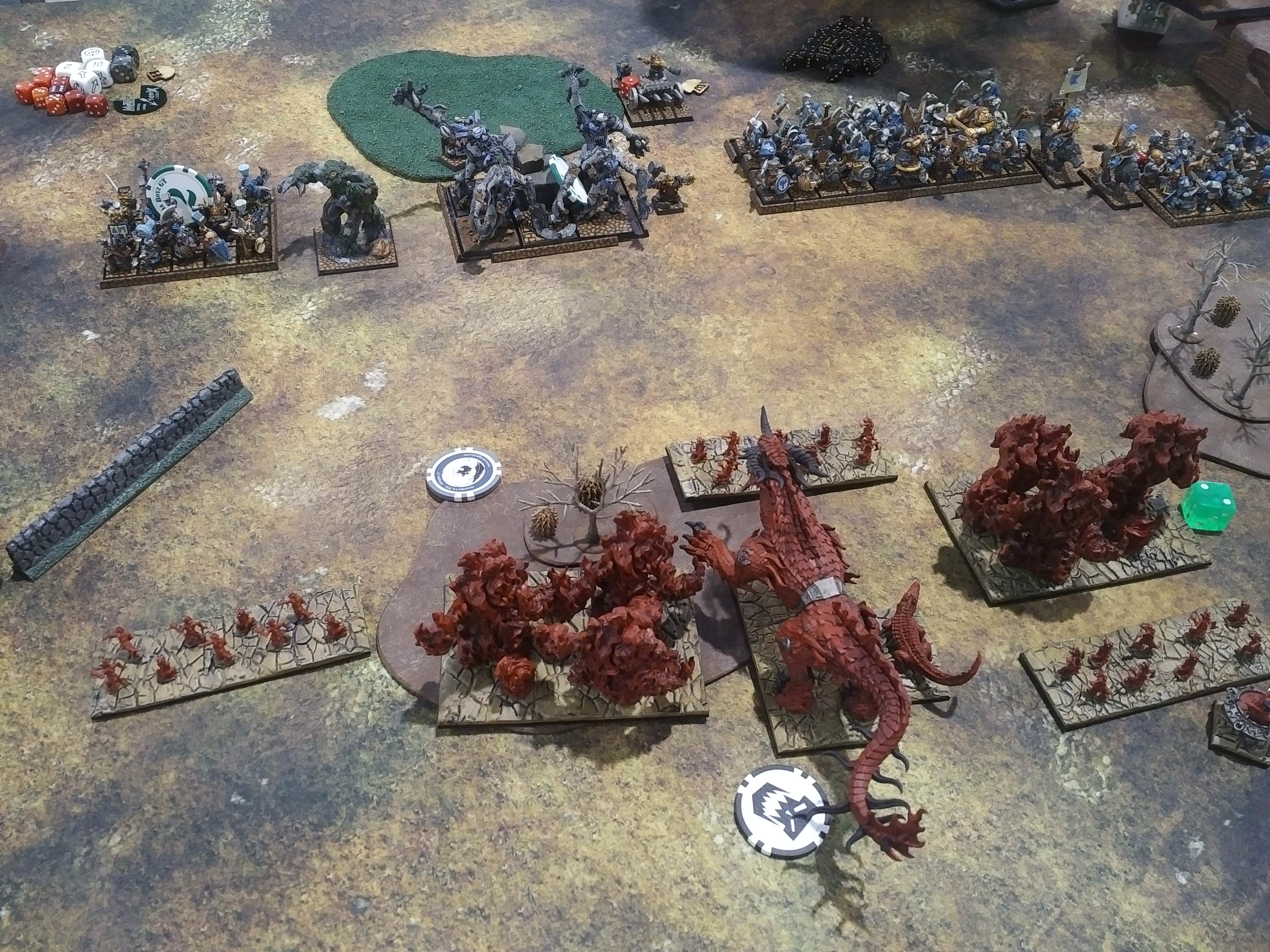 Sallies reach that 12 standoff band with the Dwarfs. Exploratory breath attaks cant get much purchase in D6 rockementals 😐 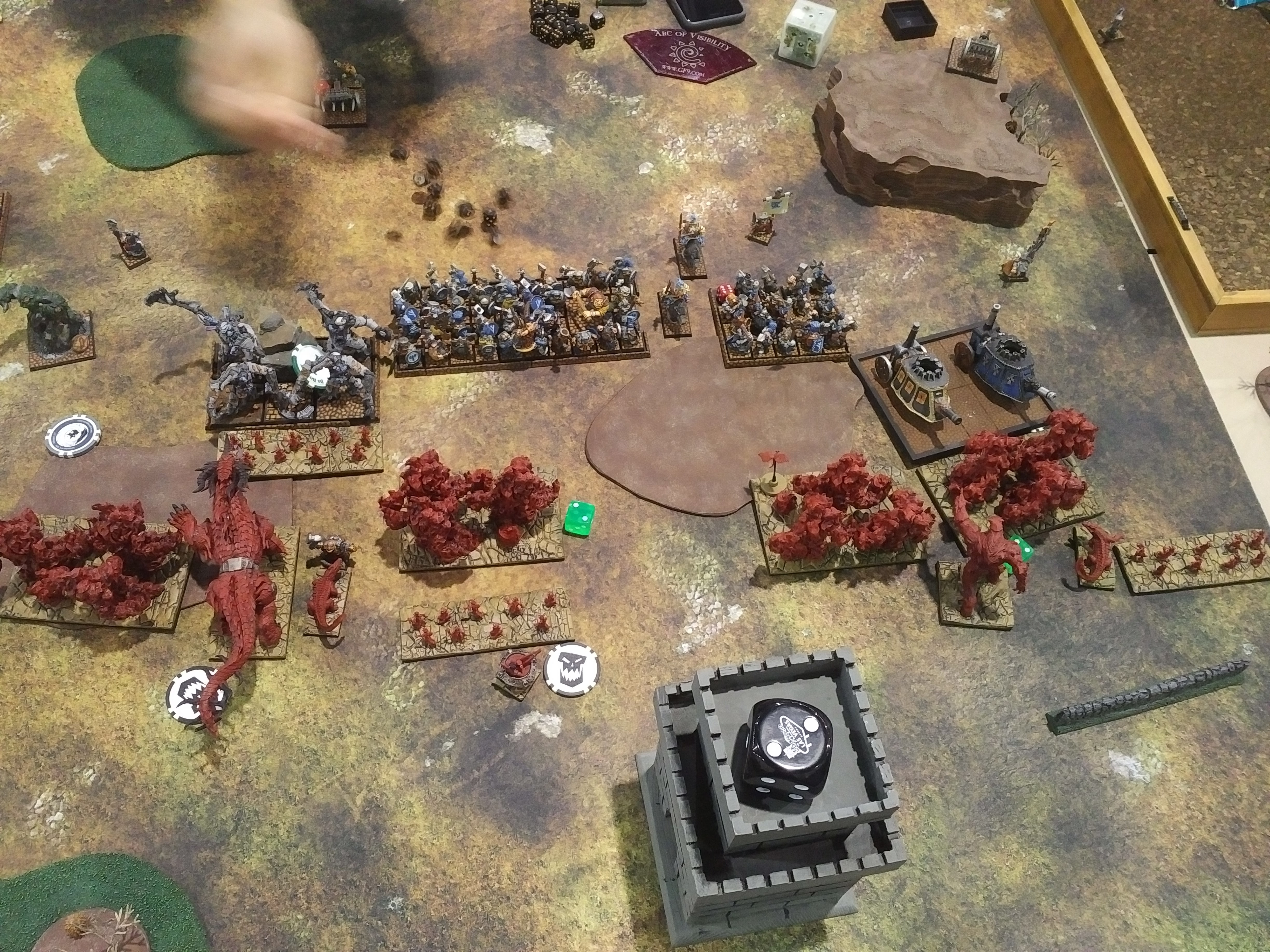 With a resounding cry of YOLO! the Dwarf line slams forward, with the Earth Elementals hitting the bait Sprites and the Brocks thundering off their hill into the token-bearing Fire horde, plus the flying King bopping the Healing Herald. 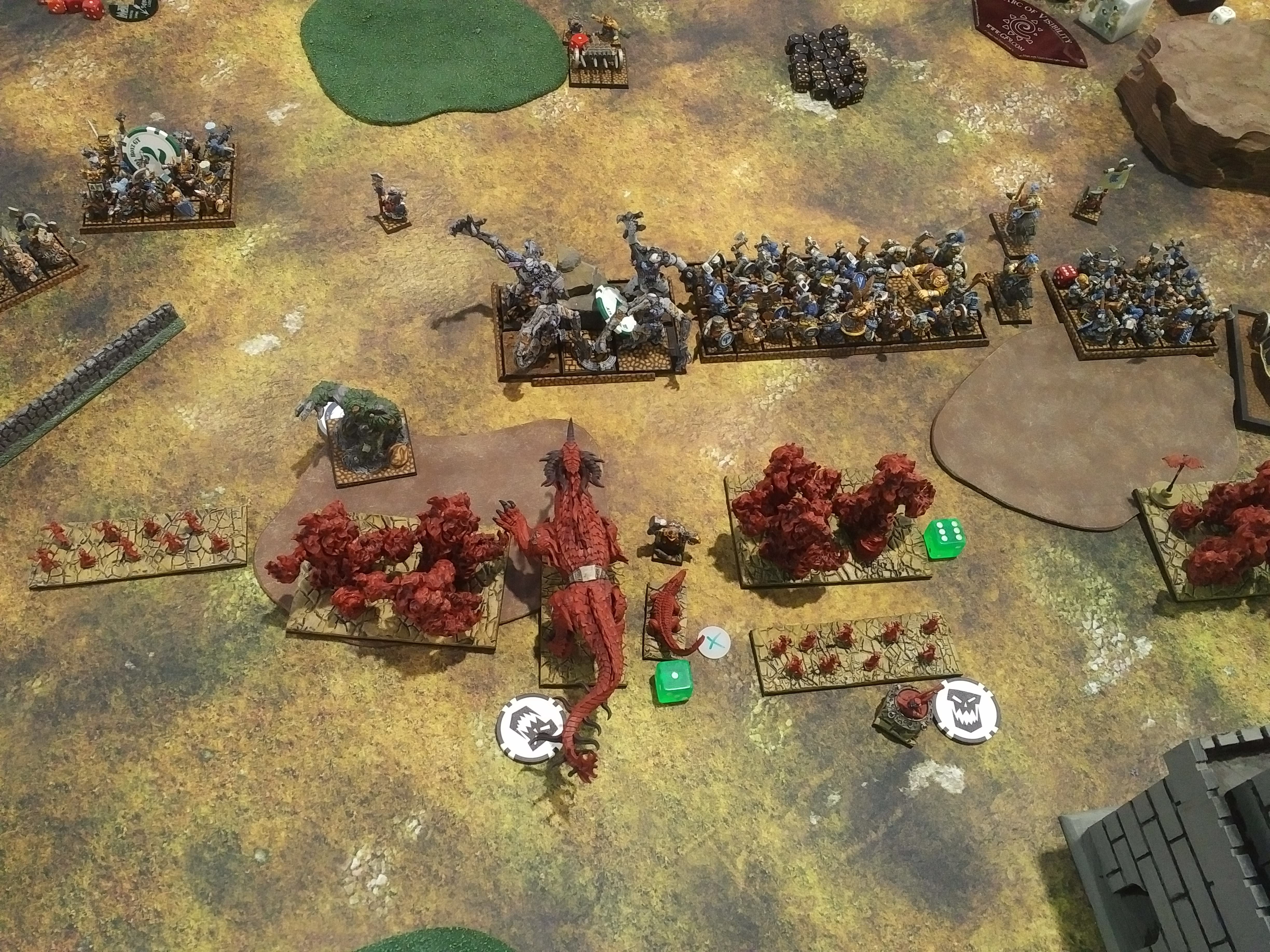 The Sprites evaporate, as do the Fire Elementals (which was a bit surprising to me, given the 4+ and 4+ they needed per wound, although the Dwarven rout dice were definitely hot all game). The Herald also wavers, on a rerolled 11! The central Fire horde also copped more shooting damage from the Organ Guns. 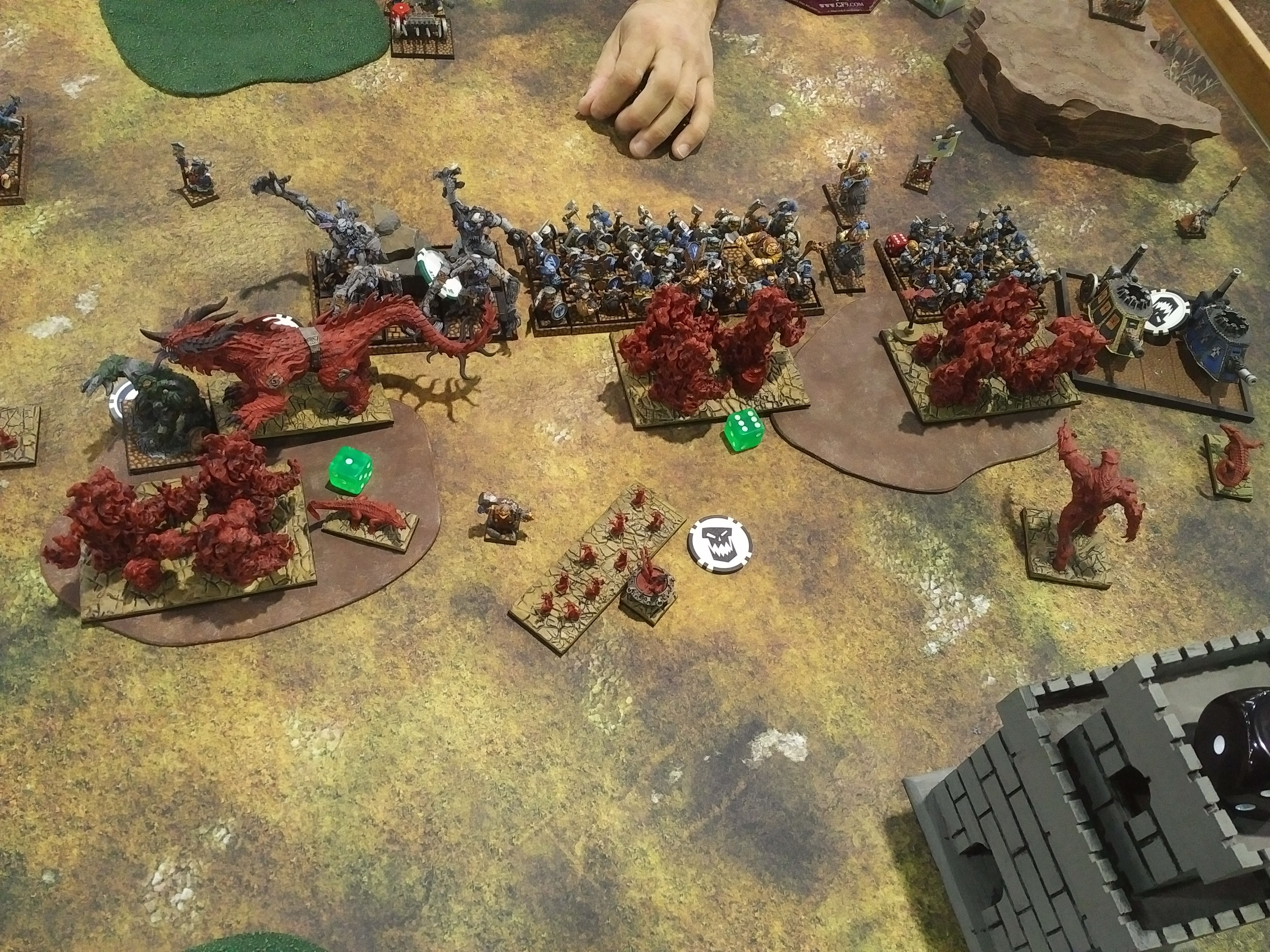 With the battleline getting cramped and not enough Dwarfs dying, things get a big drastic for the Sallies. The Ankylodon flanks the Greater Earth along with Fire Elementals in the front, with the understanding that hes screwed if this doesnt work. Meanwhile Fire hordes go into the Ironclad to begin the grind and the right Ironguard to hopefully break through next round. To protect their flank the Diadem Herald tosses himself in front of the Brocks, offset to pull them to the side when they align. Breath attaks lay a little damage into the Brocks but their nerve is far higher than I remember. 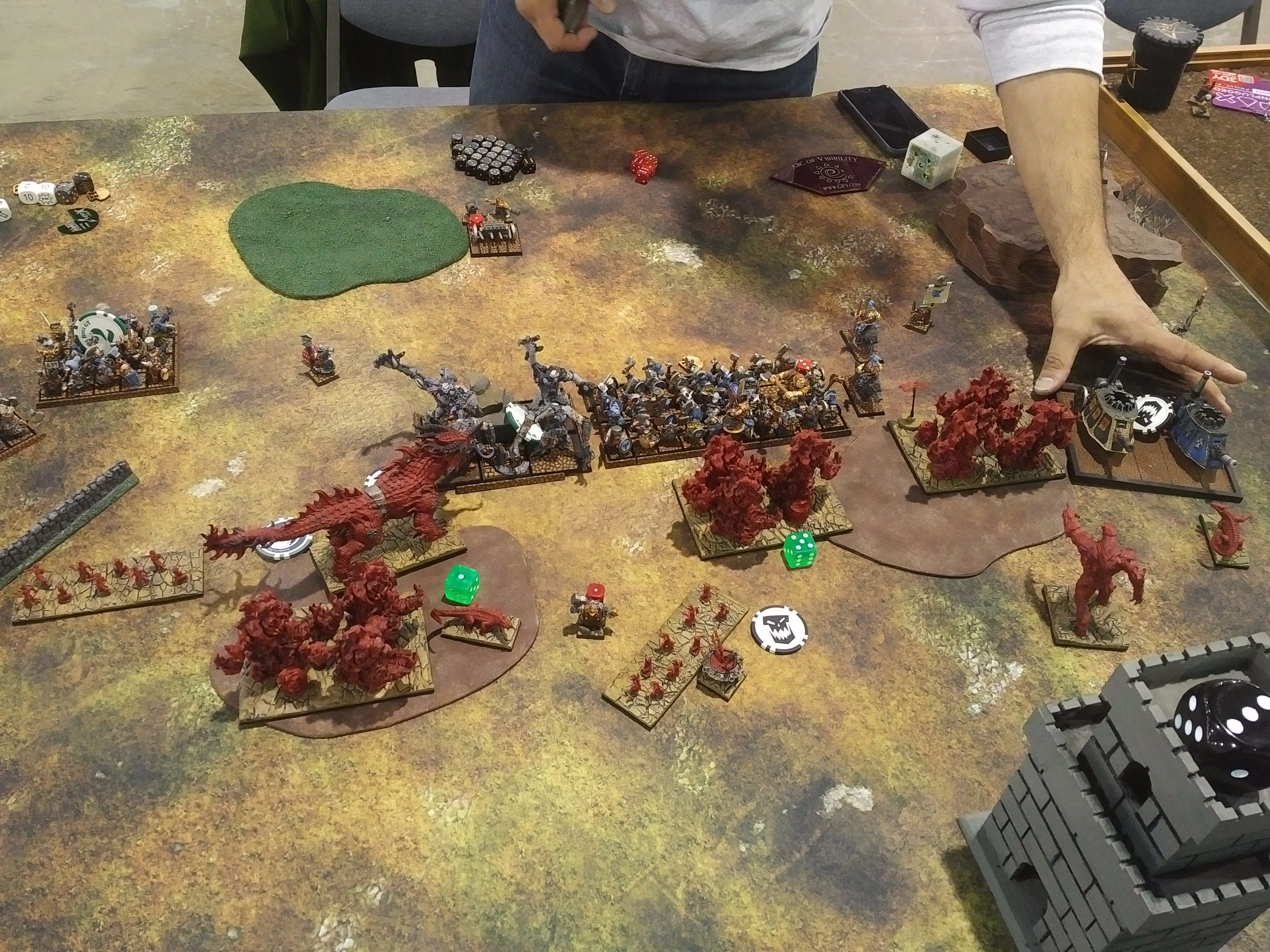 The Ankylodons gambit pays off and the GGE is reduced to rubble, and happily the Ironguard fall to the speedy Fire horde as well, letting them scoot past the arc of the Brocks. Even more unexpectedly, the central Fire horde is able to waver the Ironclad! Headstrong or not, thats pretty sweet.

[We then went into his turn and forgot the lucky waver on the Ironclad, which resulted in a lot of carnage and so on until I went and spotted his headstrong token. He failed the headstrong roll and, being an absolutely gent, we reset the game based on my photos ] 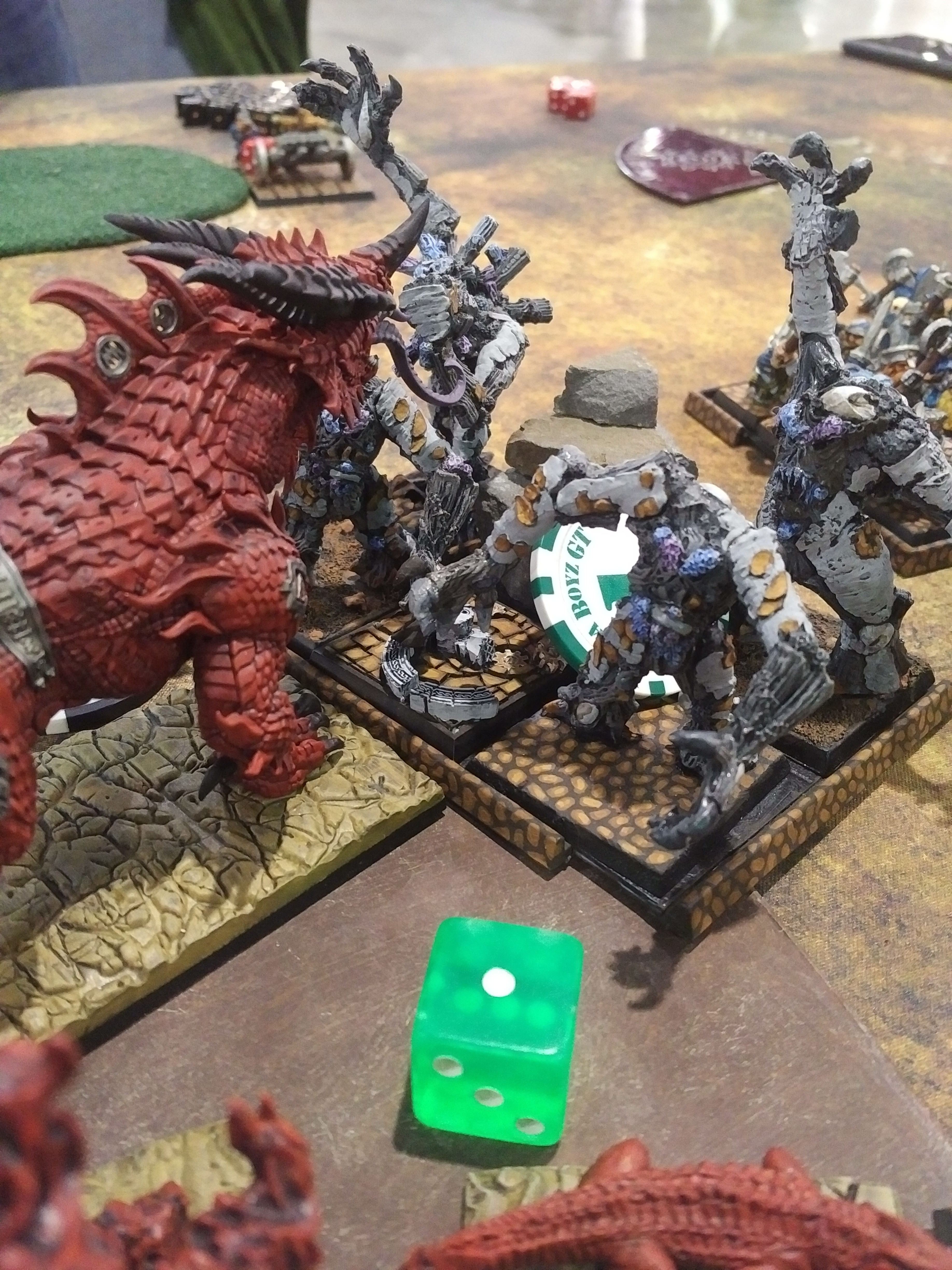 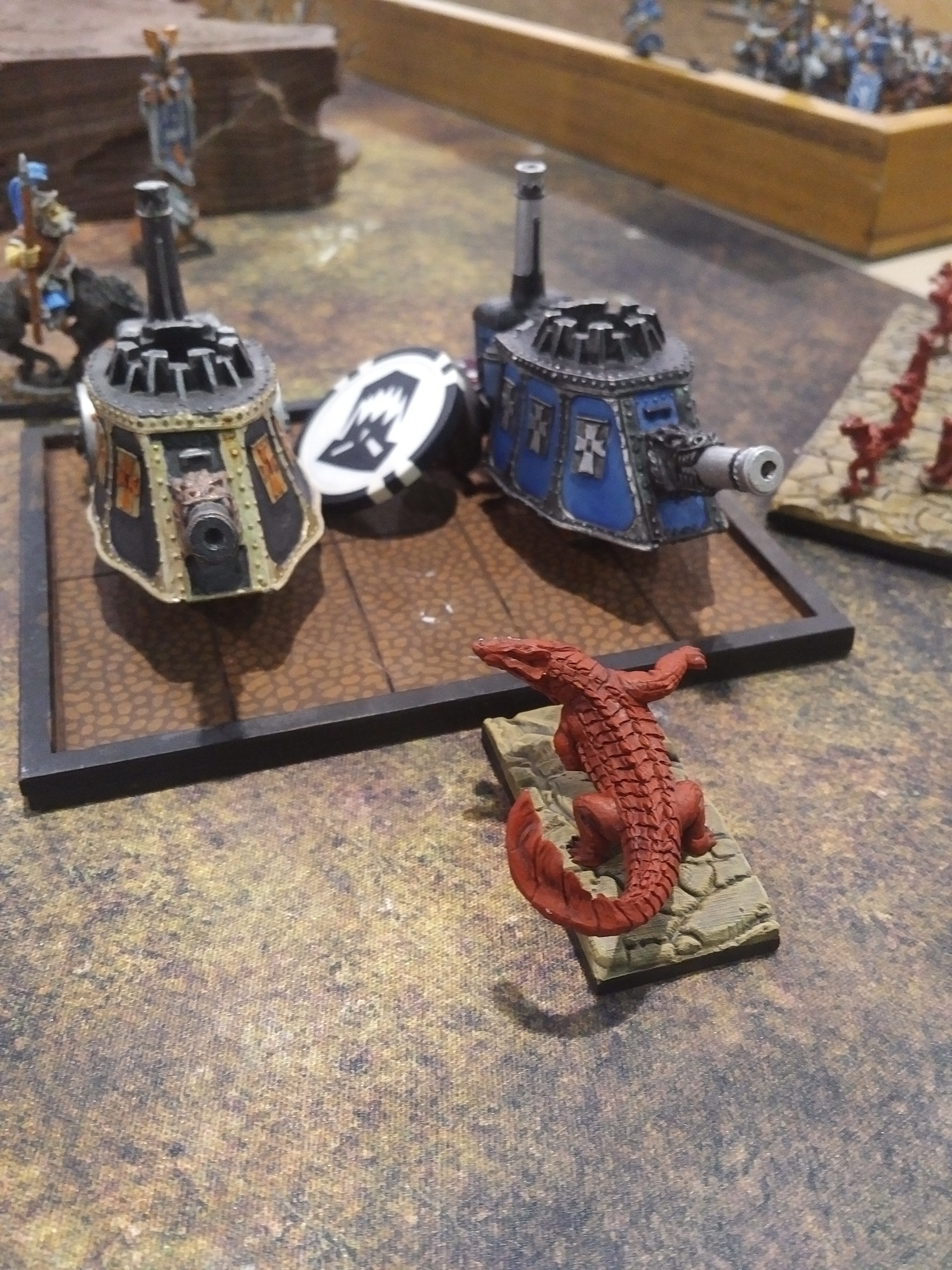 Despite these setbacks the Dwarfs shoulder on, as they do. Earth Elementals piled into the waiting Ankylodon (for little result) and the Brocks ran over the poor Diadem Herald. A battle driller had a shot at the hasty Fire horde for a lark and the King continued to harass the Healing Herald. The Dwarven left flank crept closer and Guns tried for 6+ to hit vs something red.

That failed headstrong on the Ironclad is punished to the full extent when the Dwarven horde receives Fire Elementals in the front and the flank, as the speedy Fire horde smashes through a Battle Driller and follows into the Ironclad. They die. The Ankylodon faffs away at the Earth Elementals (his 4+ to hit being way harder to deal with then their D6) and the Brocks take another breath bath from the CLOFD, but likewise dont care.

The Dwarf answer by hitting the speedy Fire horde with Brocks (tons of damage but no rout); flanking the Ankylodon with bane chanted Berserkers + Earth Elementals in the front (the Serkers roll insanity and the ABP is toppled); and shooting the hell out of the central Fire horde (popping it). Brutal stuff. Also note that the King has been chasing the Healing Herald around all this time, bopping him for a single wound to disorder him.

Sally 5 sees the flanking Ironguard finally engaged by a Fire horde, the Earth Elementals receive some breath loving (for all the good it did), and the speedy Fire horde punch the Brocks, who still refuse to rout. 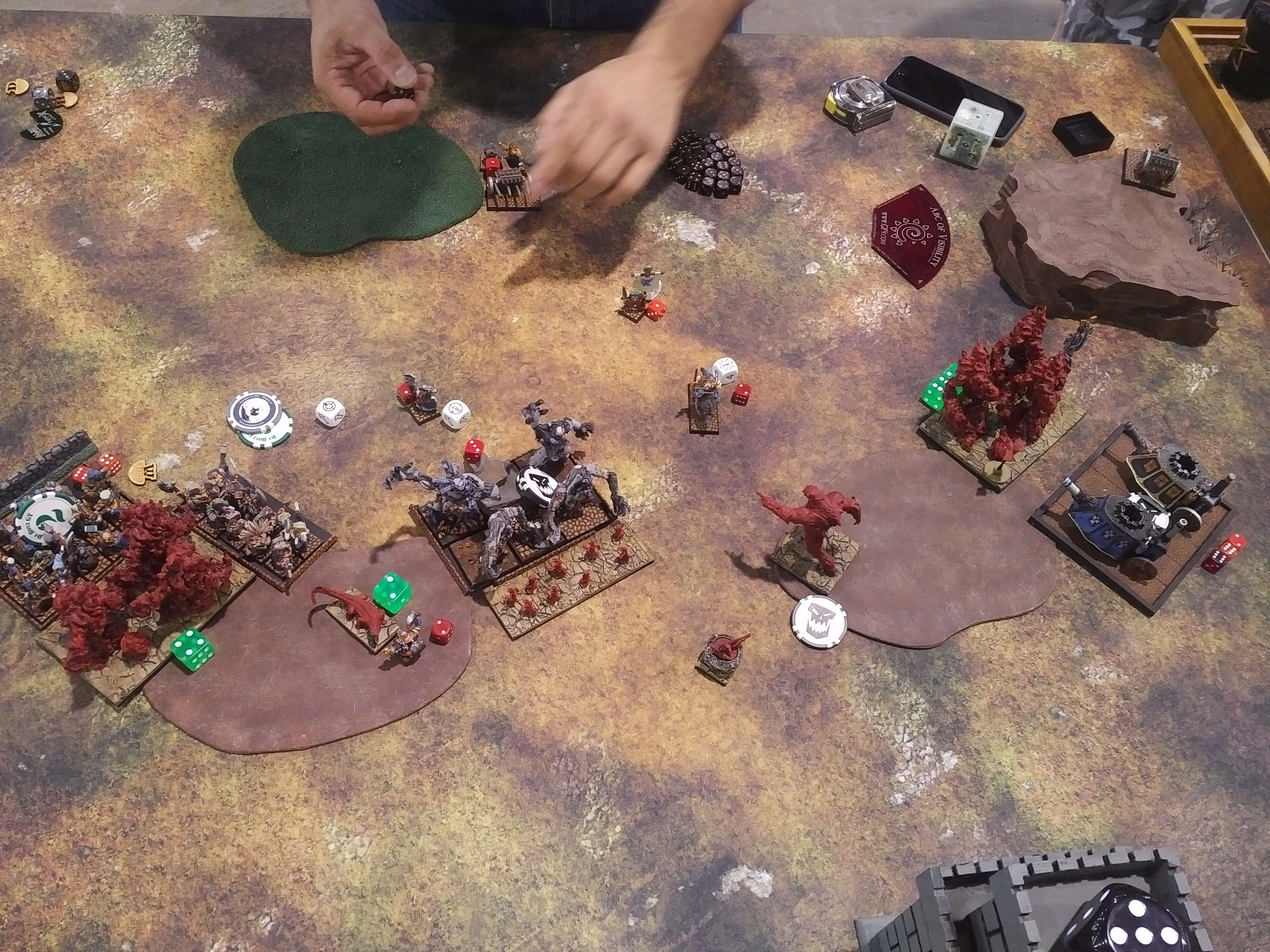 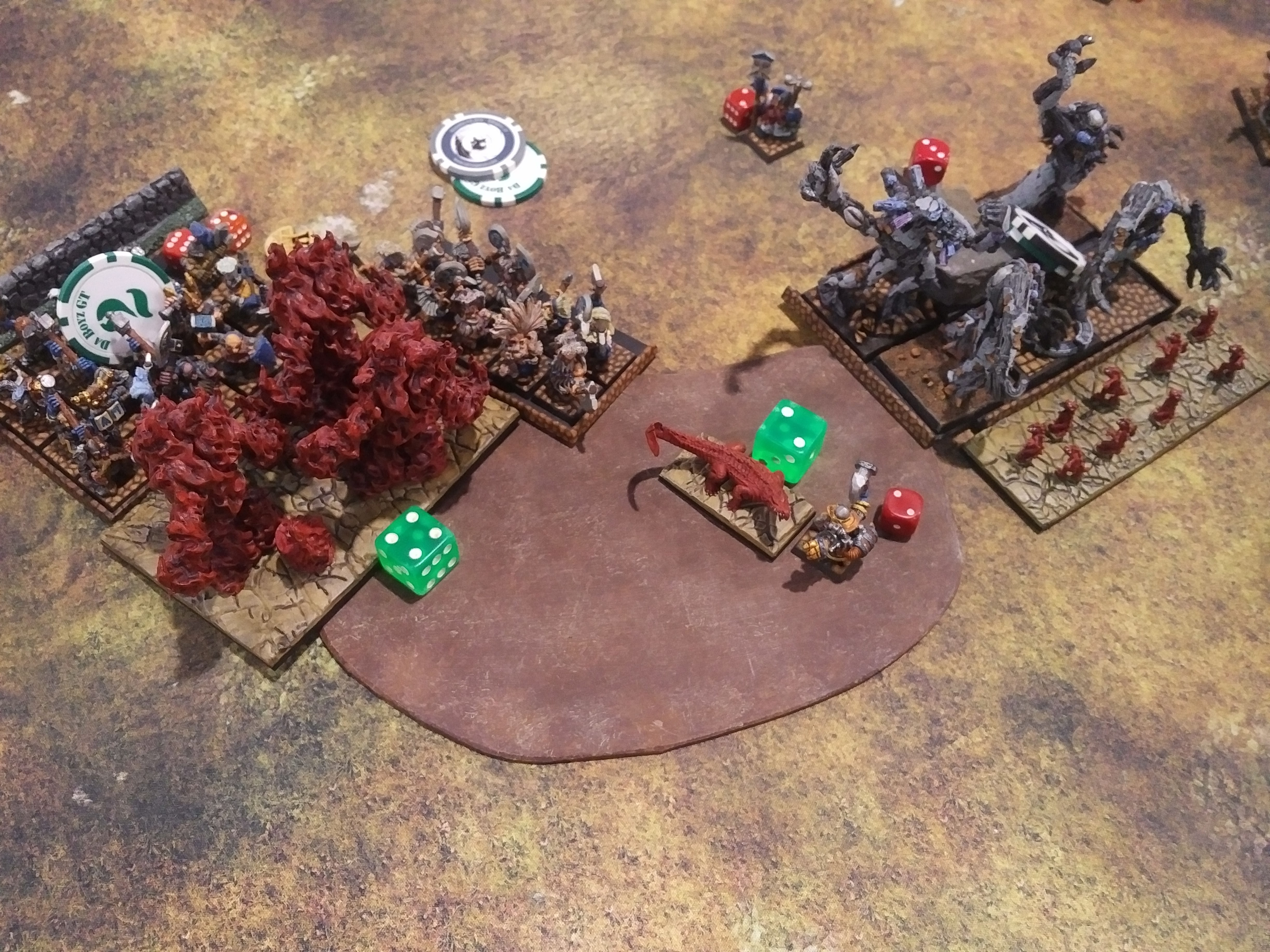 The Dwarfs drop the hammer once more, double teaming the left Fire horde, running over some Sprites and dispersing the speedy right Fire horde. Somehow the left Fire horde survives the (hindered) Berserker blender in the flank! And the CLOFD is wavered after suffering focused Organ Gun shelling. 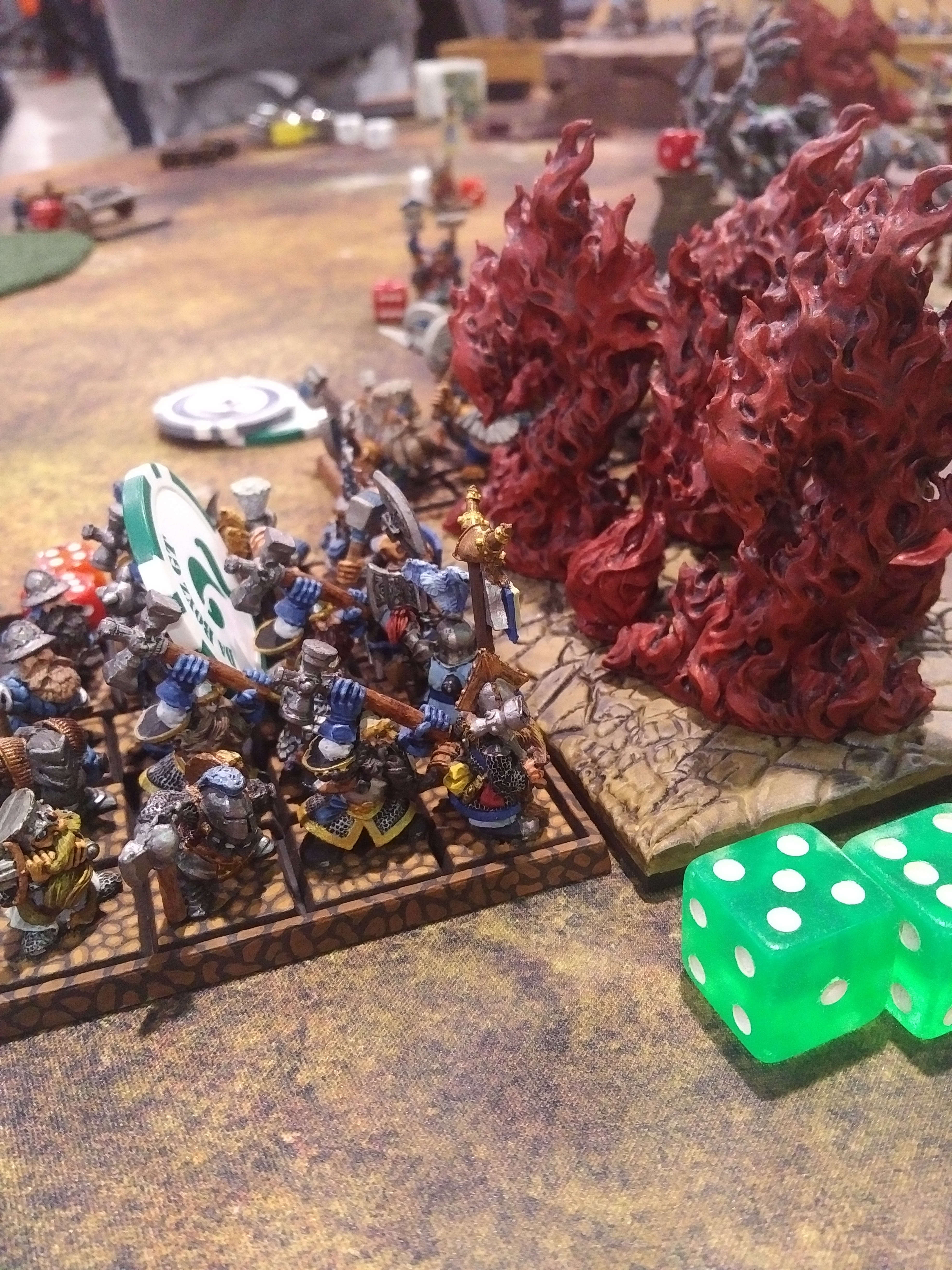 Sally 6, the last Fire horde pounds into the Ironguard, triumphantly claiming their token.

Dwarf 6 sees the Fire horde extinguished by the Berserkers and a lot of stuff made dead – I think the King killed the Mage-Priest this turn, after a lucky 10 reroll on the Healing Herald the turn before. Well ahead on tokens, Turn 7 would have simply given the Dwarfs a chance to table the Sallies by shooting the CLOFD to death, but the extra turn die said no.