Back with another handful of quickie Salamander reports! November 18th I drove down to Philadelphia to hangout at PAX Unplugged and throwdown in the KOW tournament going on that Saturday. Originally it was supposed to be four games with a 20 person cap  but for whatever reasons it ended up just being me, two clubmates from Albany, and the TO (a great dude Im happy to see going to more NE events). So we cut it down to just three games, which suited me fine, as I was able to get in a little vendor time and drive home early.

Originally I had wanted to change things up and start running double Mage-Priests, but I wasnt about to go into a tournament with a list Id never played – one I hadnt played for a few months was bad enough!

The two monsters I respect most in the game right now are probably Kings on Chimeras and Void Lurkers, and this list has them in a tagteam O_O I also was shocked at how mediocre Warbands are, although they are pretty cheap for their stats, so I suppose it works out.

First round was Invade, with Sallies grabbing first! 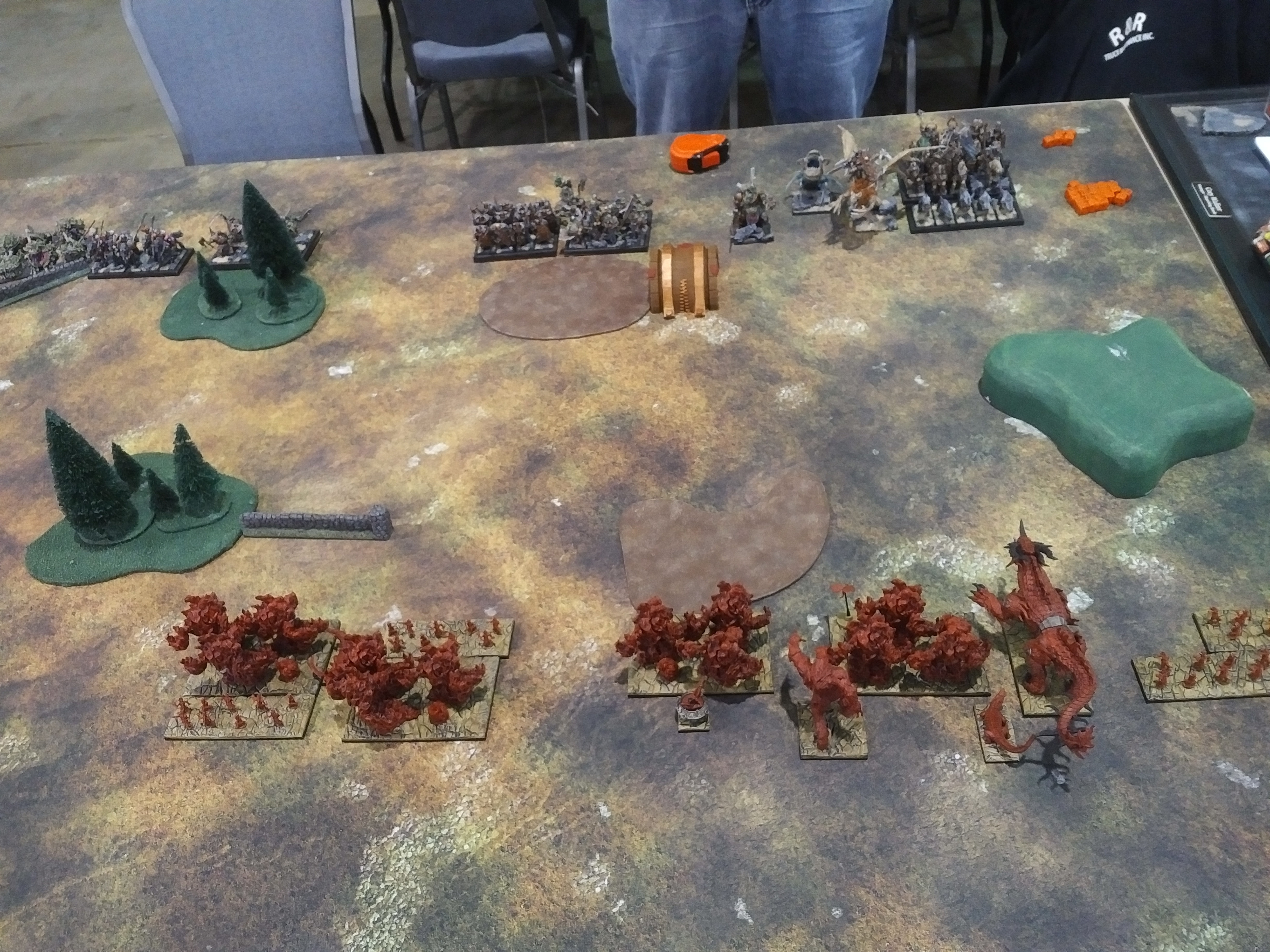 Deployment sees a flank denied, as is typical for the Bloodfire. 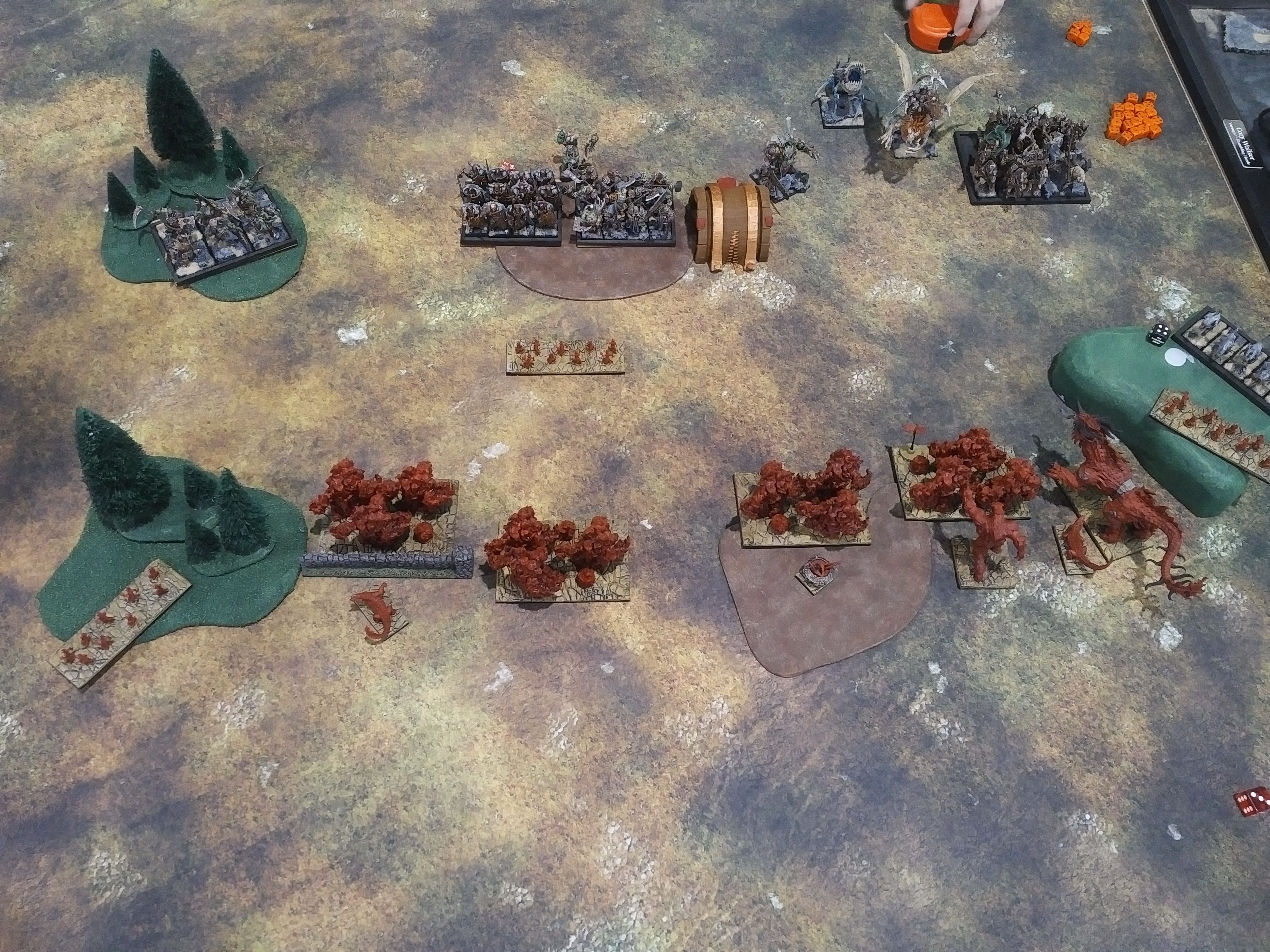 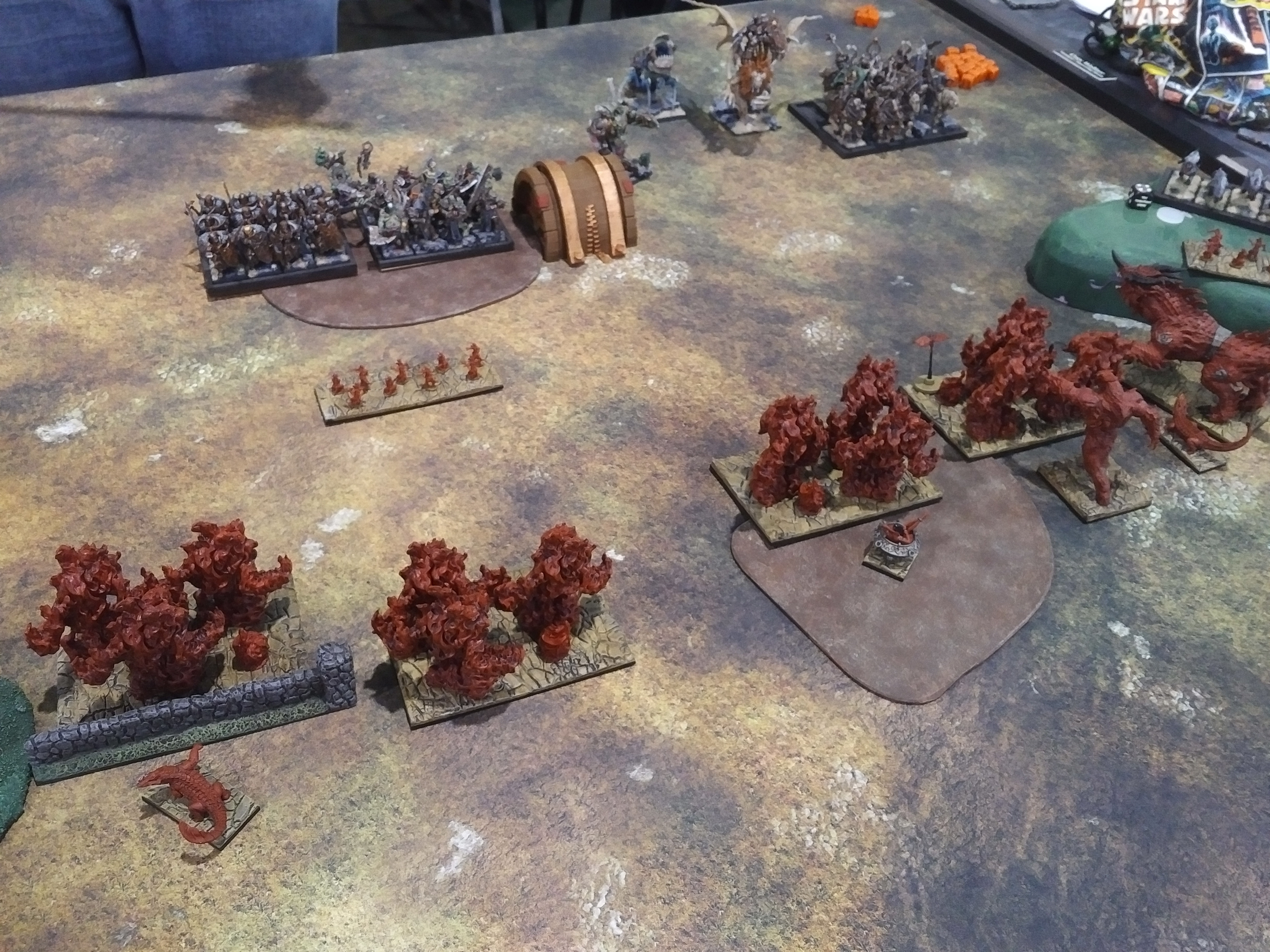 After Sally Turn 2, the red battleline prepares to receive chargers. Not counting the rightmost Sprites, who got eaten by Wolves, who then were barfed on and destroyed by more Sprites. 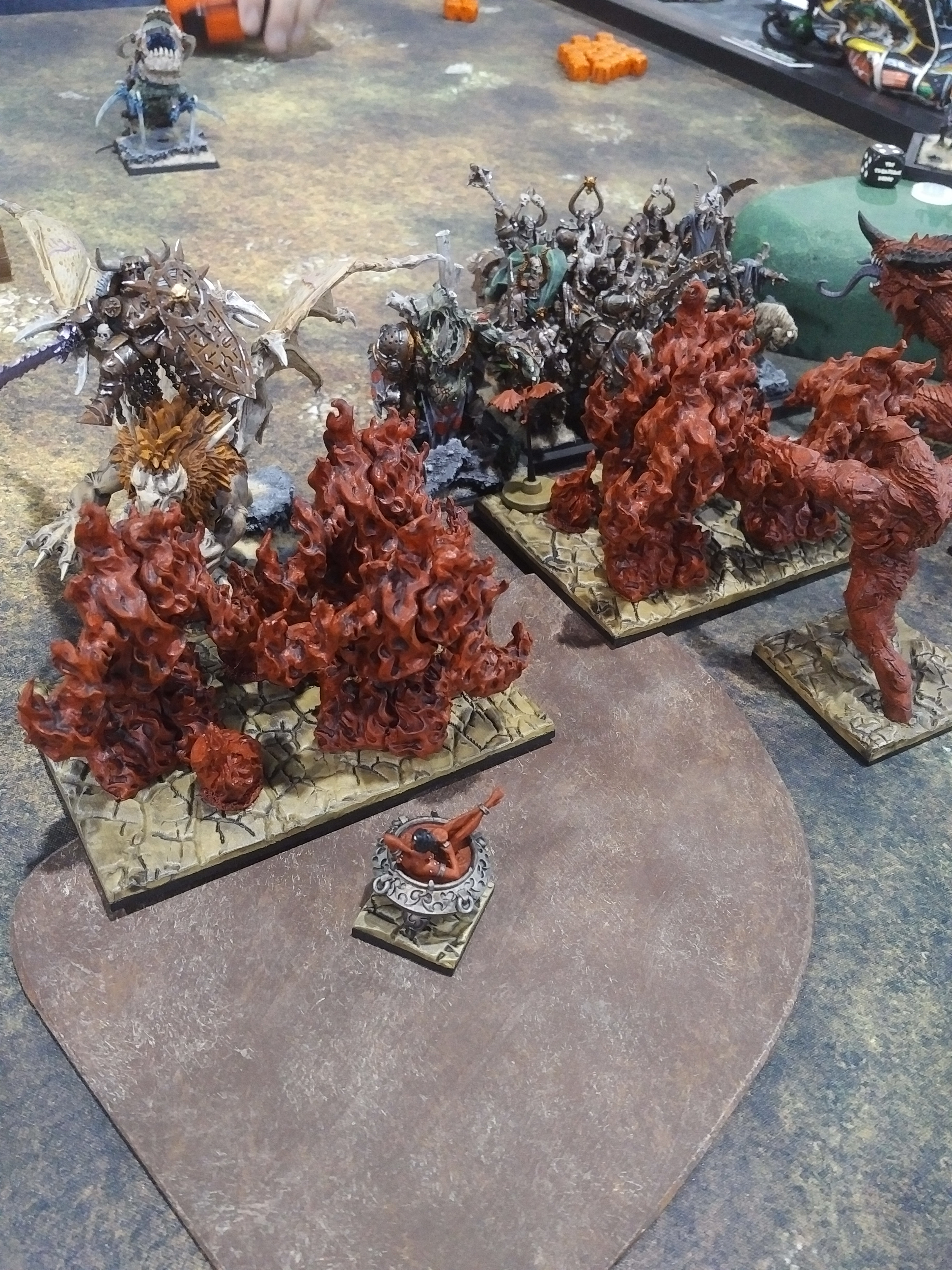 Boom! The Varangur elite crash into the elemental host. The Fire horde facing Mounted Sons + Void Lurker explode in a shower of fiery gore, however the King finds himself stuck after his solo venture into a neighboring horde. On the left flank the Horse Raiders begin a long grind in the woods vs some very tenacious Ember Sprites. 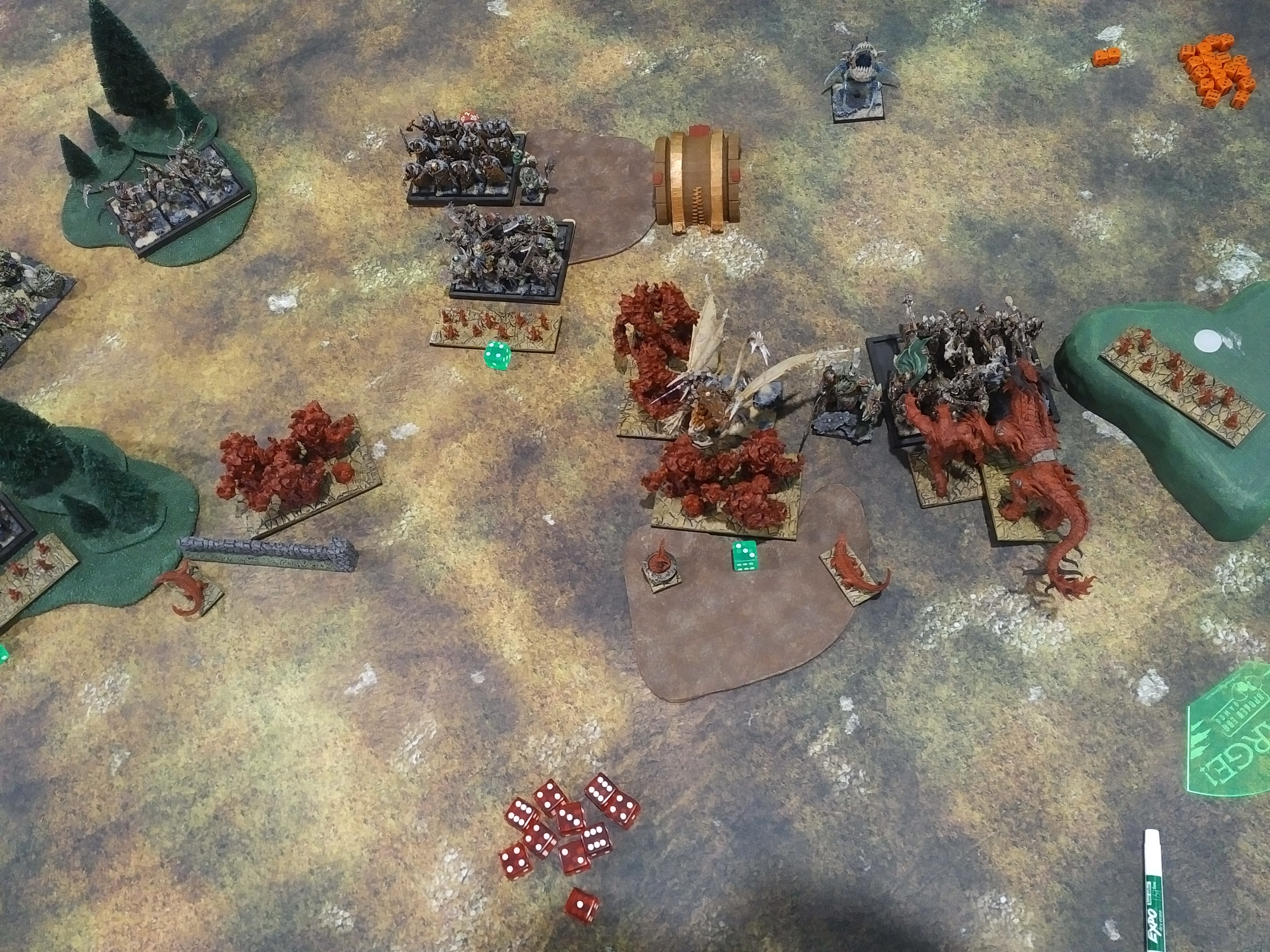 Retaliation is brutal, with the Void Lurker ignored in favor of hitting the Sons with CLOFD + ABP and smashing the King with a Fire countercharge to the front and surge charge to the flank. The Sons are smacked around (wavered but whatever) and the King is melted to slag under 54 CS2 cuddles. 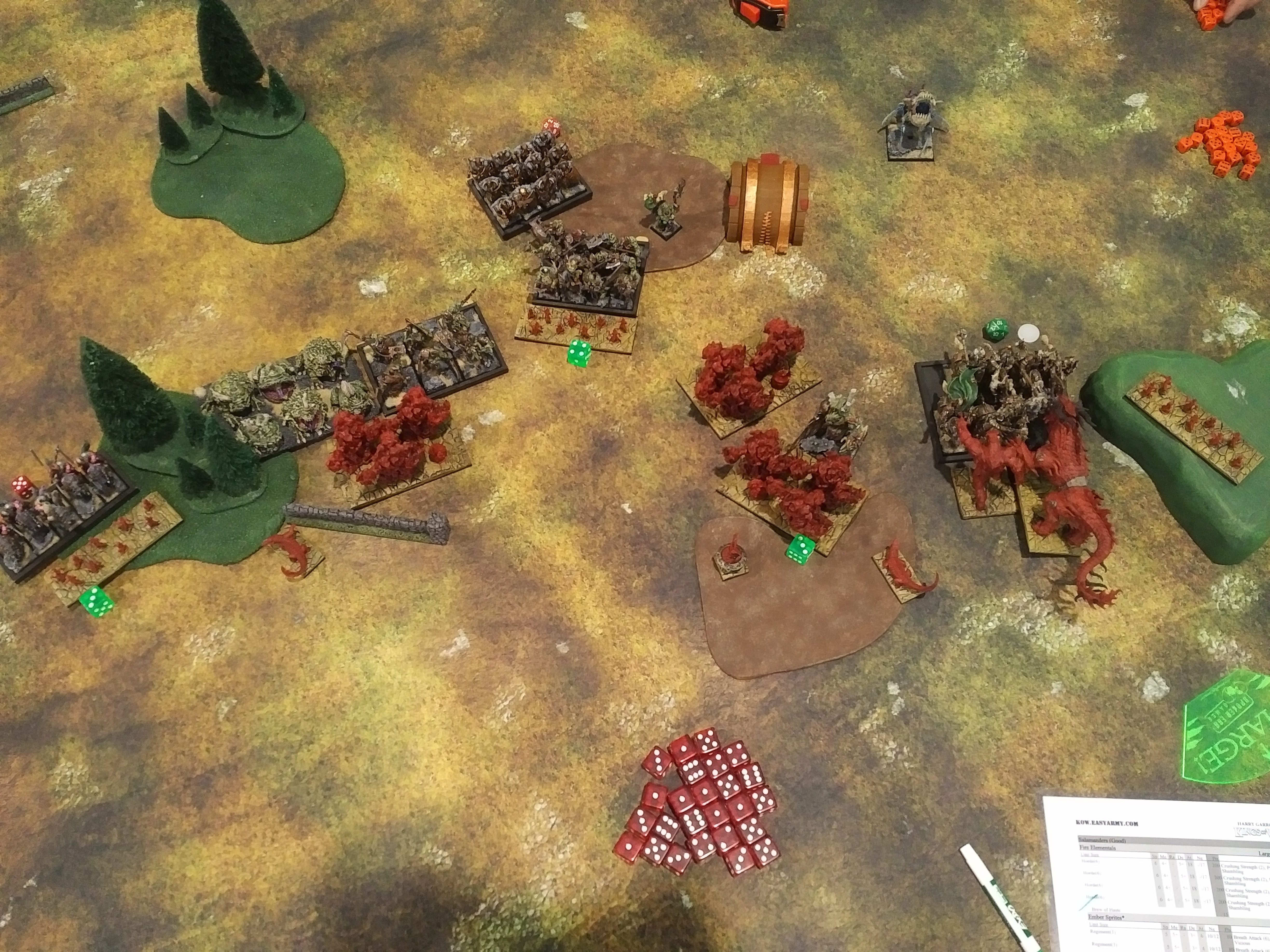 The Varangur head in again, this time punching in their flankers – Fiends (hindered) + Fallen into a Fire horde, Warband + Raiders into their own obnoxious Sprites. The Void Lurker makes contact with the Kings Fire horde (which had been rather significantly healed at this point) and the Sons countercharge the CLOFD. Despite putting out a lot of hurt none of the Salamander targets go down, including a cheeky snake eyes on the central Sprites holding up the Warbands. Importantly the leftmost Sprites take no wounds from the Horse Raiders. 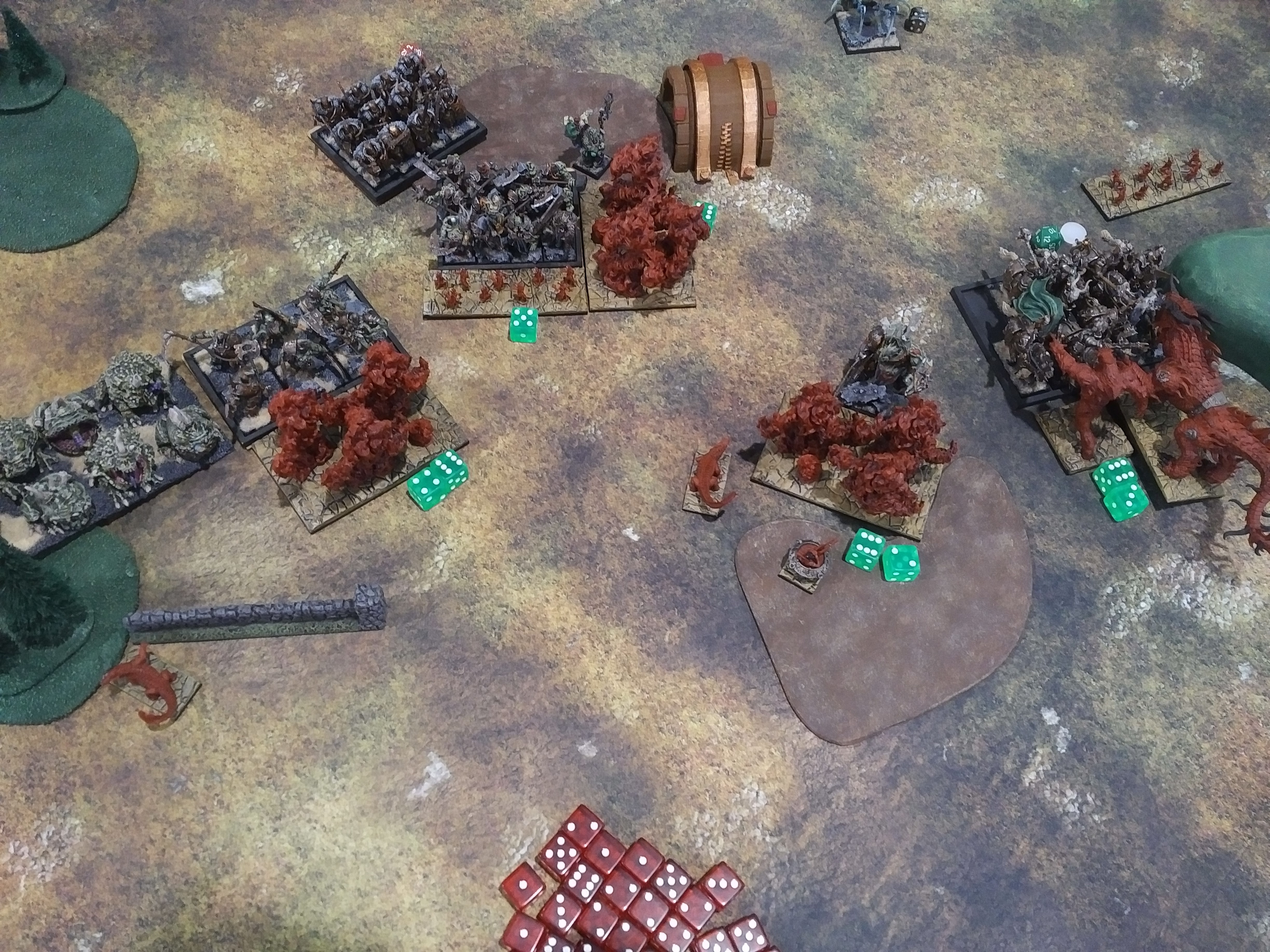 Last turns lucky nerve roles are particularly nasty as they let a Fire horde flank the first Warband reg, followed by countercharges on the Fallen (ignoring the Fiends to keep them hindered), the Void Lurker and the Sons. Plus the free Ember Sprites questing for the Magus Conclaves heads. And on the deep left flank those pesky Sprites combine fire with the Diadem Herald to cook the Raiders. 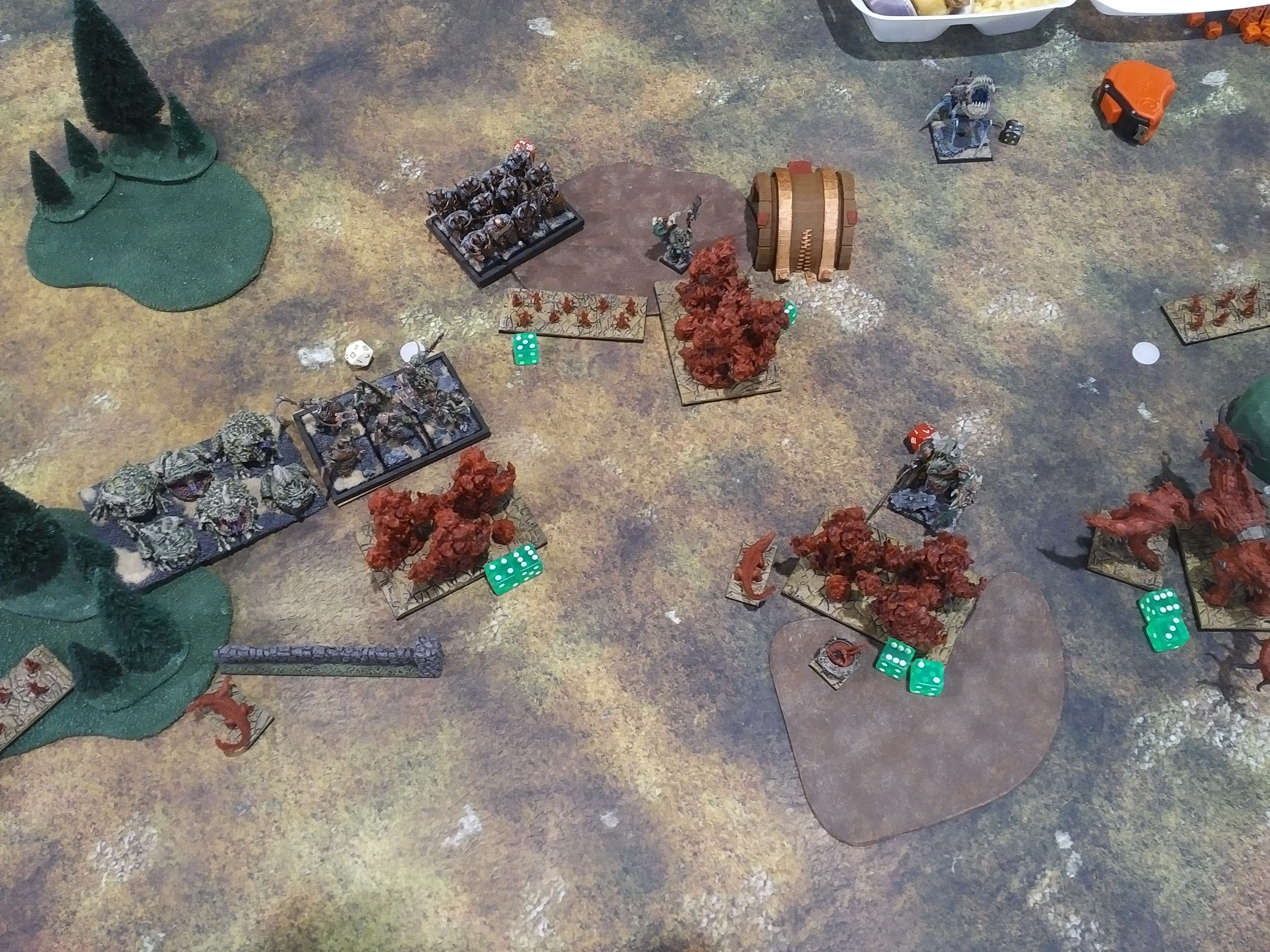 After combats, the Sons have been devoured by the Bloodfire heavies, the first Warband is toast, the Fallen are wavered, and the Void Lurker remains unmoved.

As is typical for Fire Elementals, the following turn sees most of them burn out. A hindered flank from the Fiends finishes the leftmost horde and the Void Lurker ends what the King started. 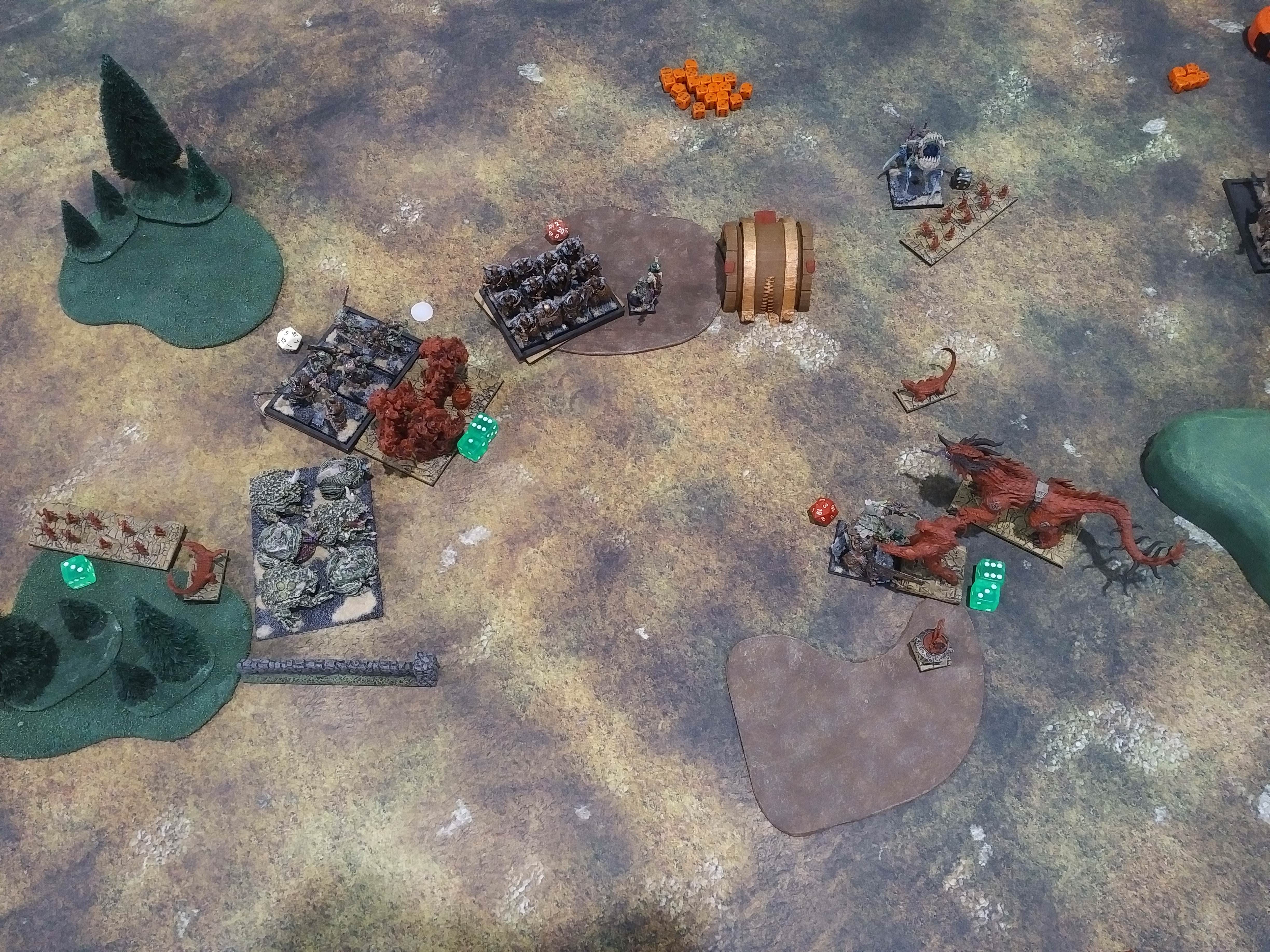 It must be a Bloodfire late game with so few red things on the board. The surviving Fire horde shoots the gap into the Fallen, the CLOFD takes matters into his own hands and stomps into the Void Lurker, and the hero-mode Sprites charge the Magus Conclave. With the exception of the CLOFD, things work out great: the Conclave is devoured by Ember Sprites, the Fallen are beaten to a pulp, and, unexpectedly, the Diadem Herald manages to waver the uninjured Fiends with a ridiculous display of dice!

Varangur 5 sees the surviving Warband shove for the enemy half of the board, and the Void Lurker waver the CLOFD. The end is nigh! 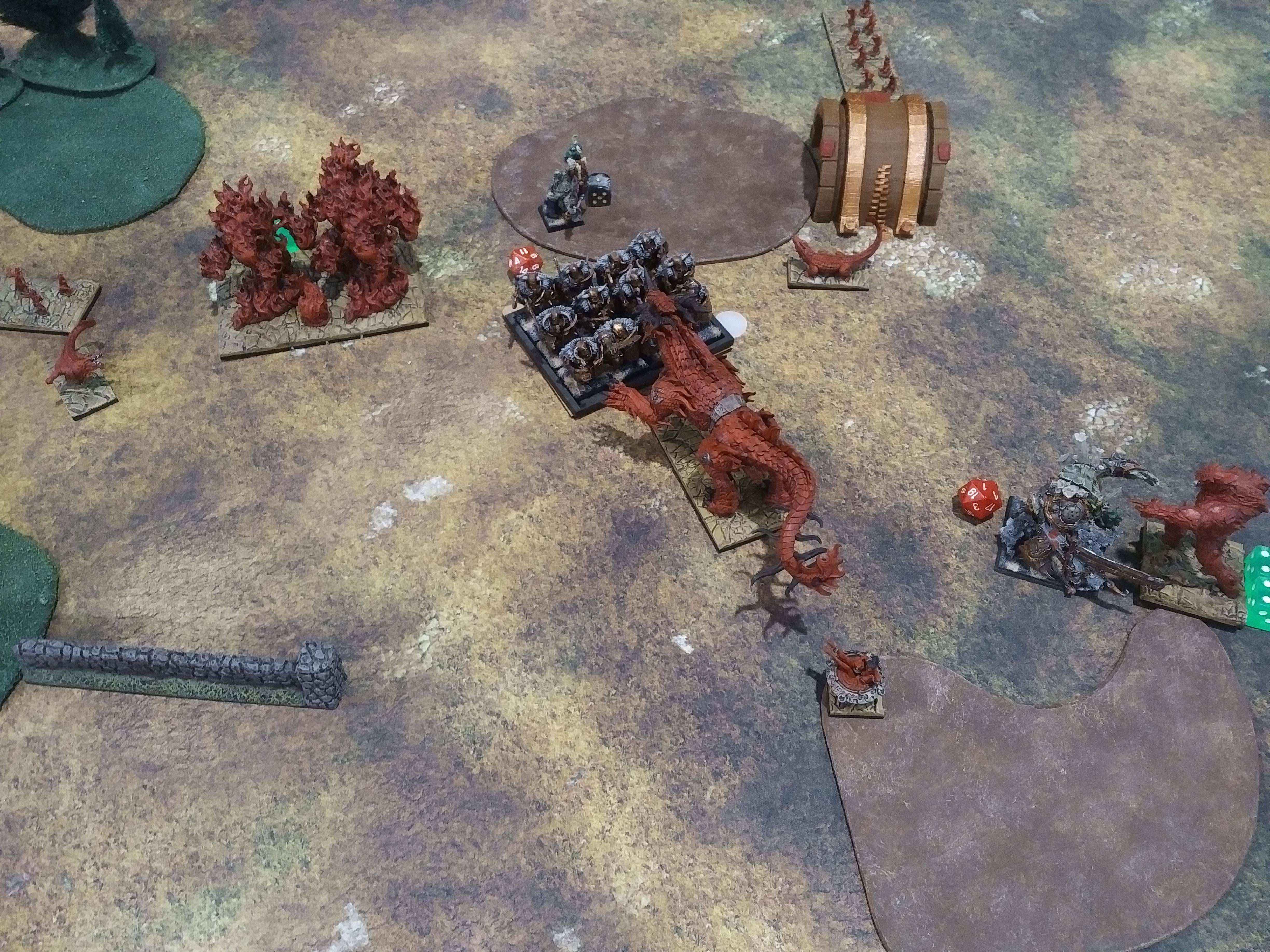 Sally 6 is largely spent sending a Magmadroth into the front of the Warband (no result) and making sure unit strength is on the enemy side. Annnnd the Diadem Herald killing the Fiends with another stunner of a breath roll ❤

In Varangur 6, the Void Lurker chops down the CLOFD and the Skald powers up for what could be a game tying throw. If he can hit and wound the last Fire horde with his throwing axe the game will be a tie! He hits! He fails to wound!