Before the tournament began, I was joking with the other Sally player that we’d have to have a go sometime, but I assured him my money was on his meta build. Lo, as if summoned, it’s The Other Sallies in the final round. 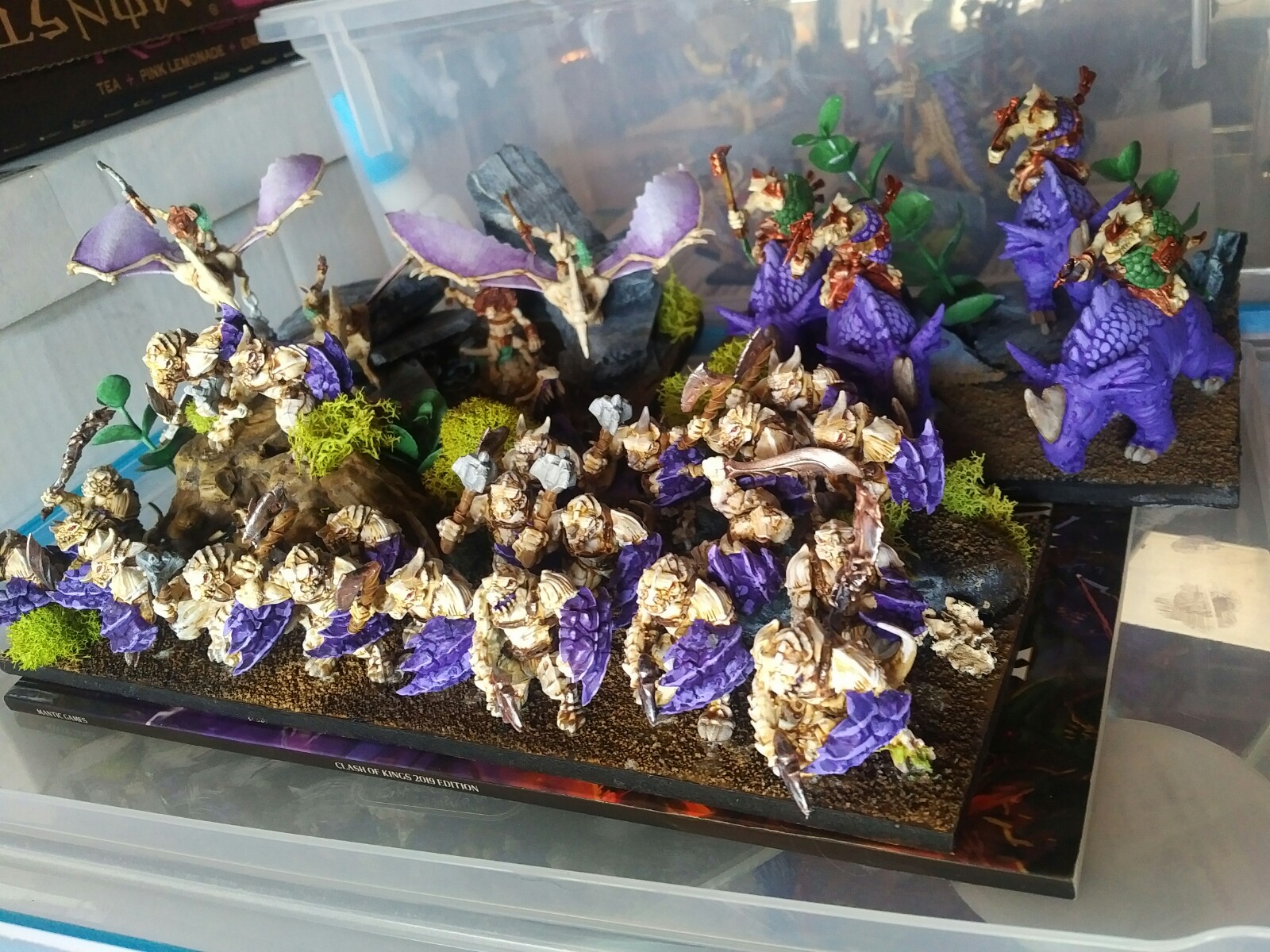 Gentle readers, this is peak lizard performance. Given how poorly he did to face me in the middle-ish of the pack should also say how much trouble even this has – and he said as much, as a new player to KOW who picked the army he liked the look of but was feeling the low ceiling to the faction. All the same, real smart player who is far more practiced then me, so I knew my sleep-deprived generalship was going to hold me back even more than my derpy list. We played OG Loot, and Bloodfire went first again (4 of 5 games!)

Round 5 we played on The Glade of the Gryphicorn table. 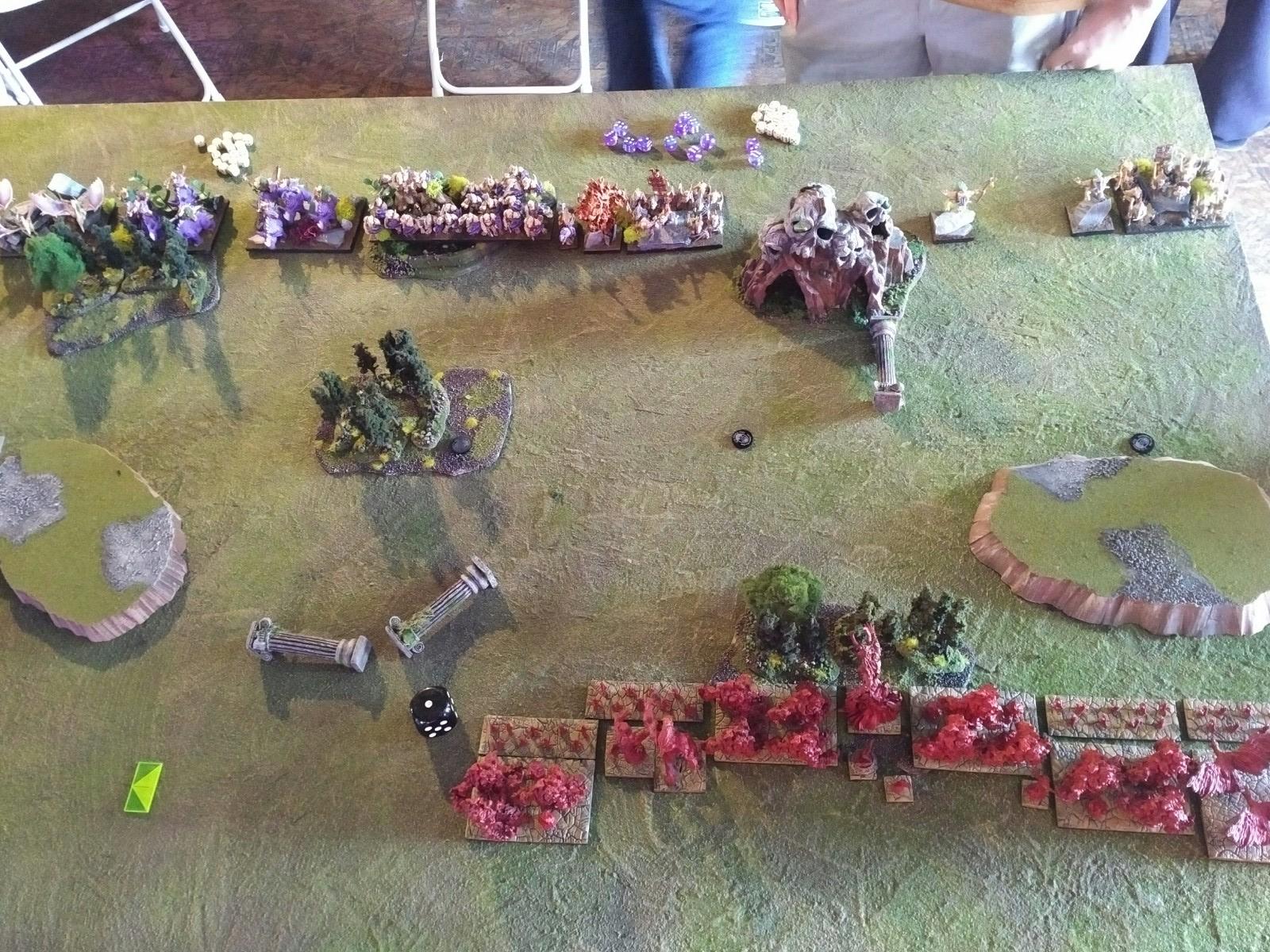 Battlines! Real Talk: I can’t stop the Rhinosaurs, so my goal is to delay them as long as possible and try to punch the center out of the list, then grind the Rhinos and end the game with 2 tokens. No pressure. 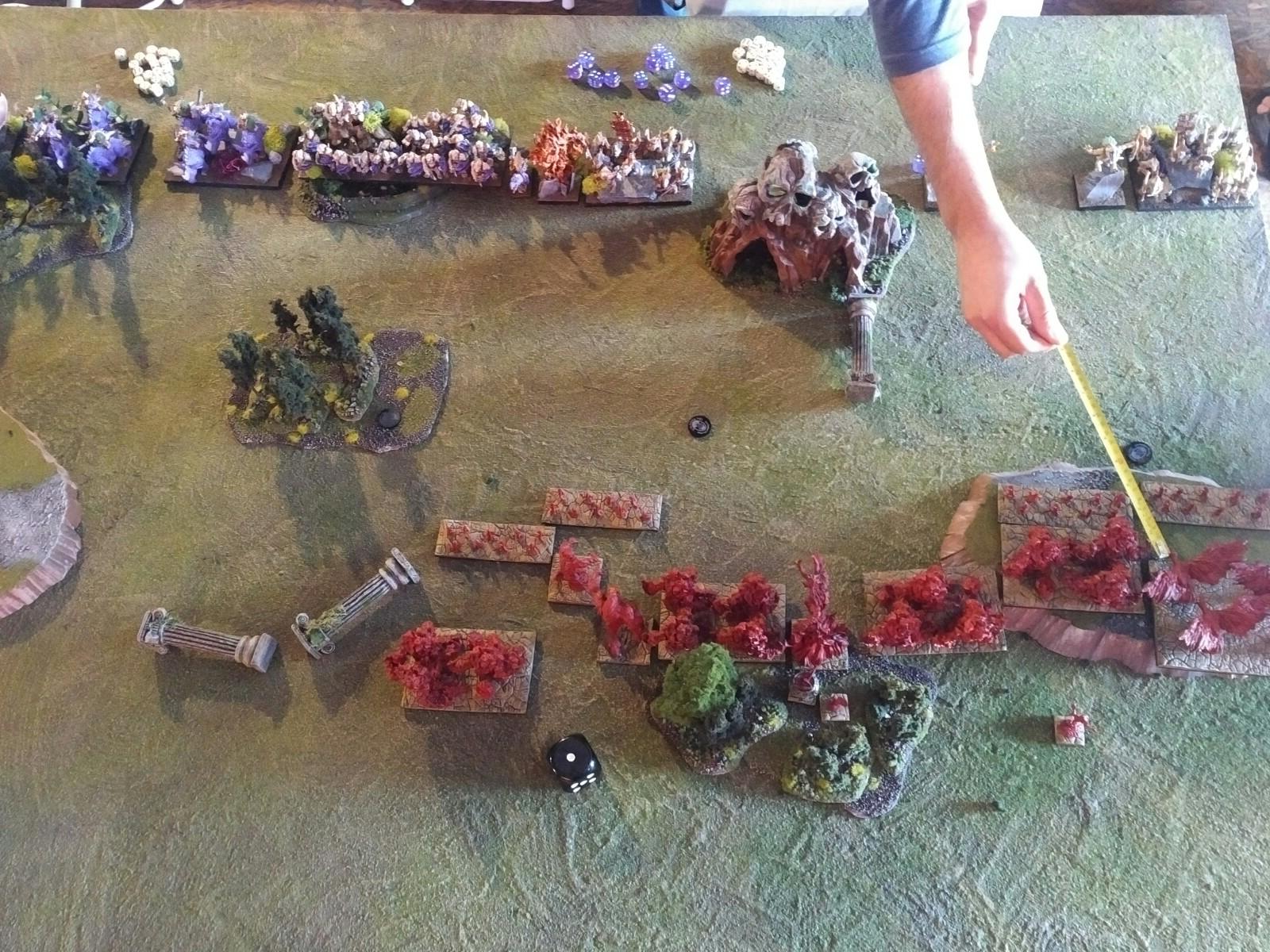 Bloodfire 1: I control the right flank, so look to lock that down; sadly, my Jarraiders can’t waver a Lekelidon 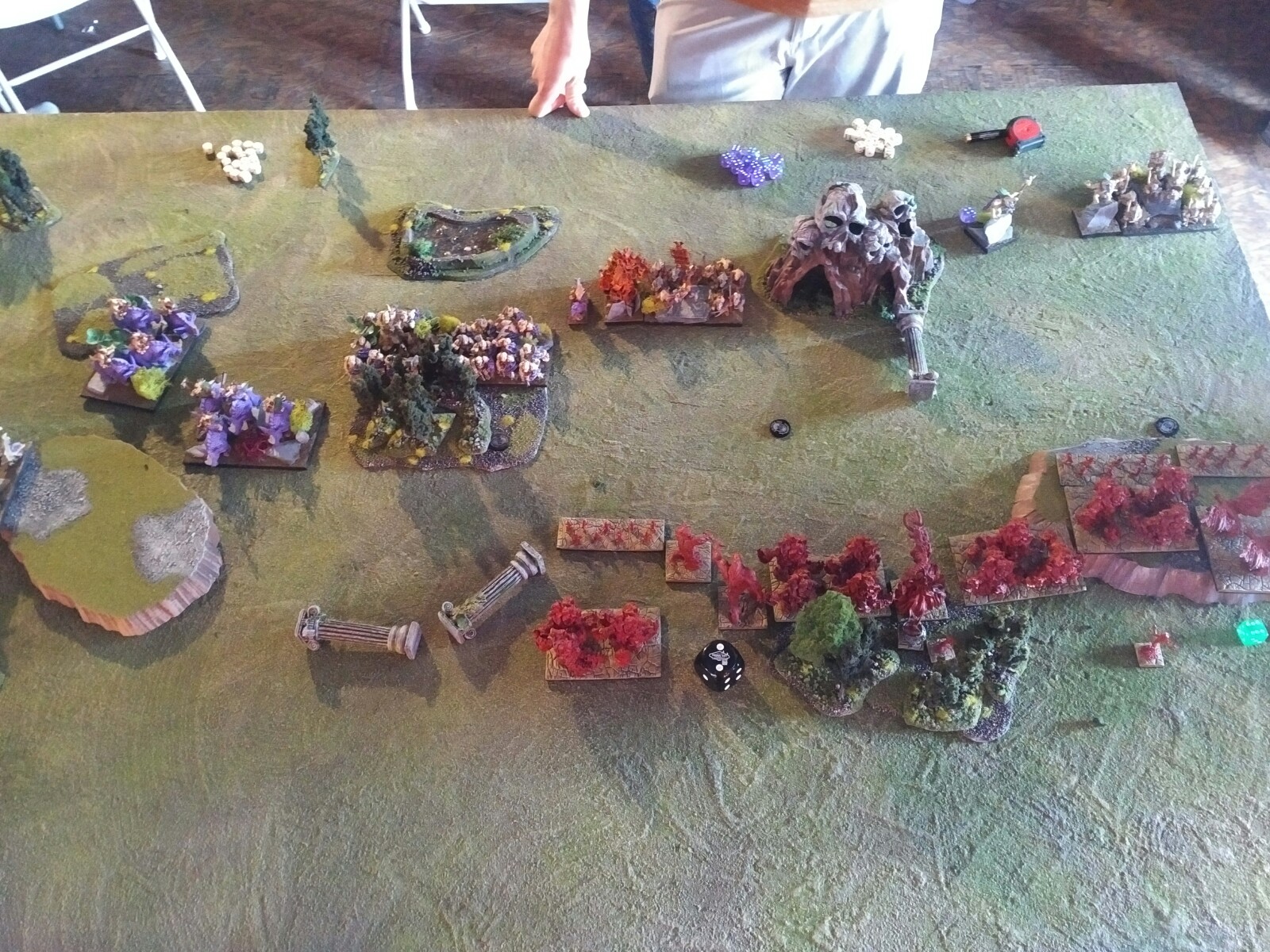 Salamanders 1: His two Leklidons lucky waver my Jarraiders on the right; Rhinos envelop 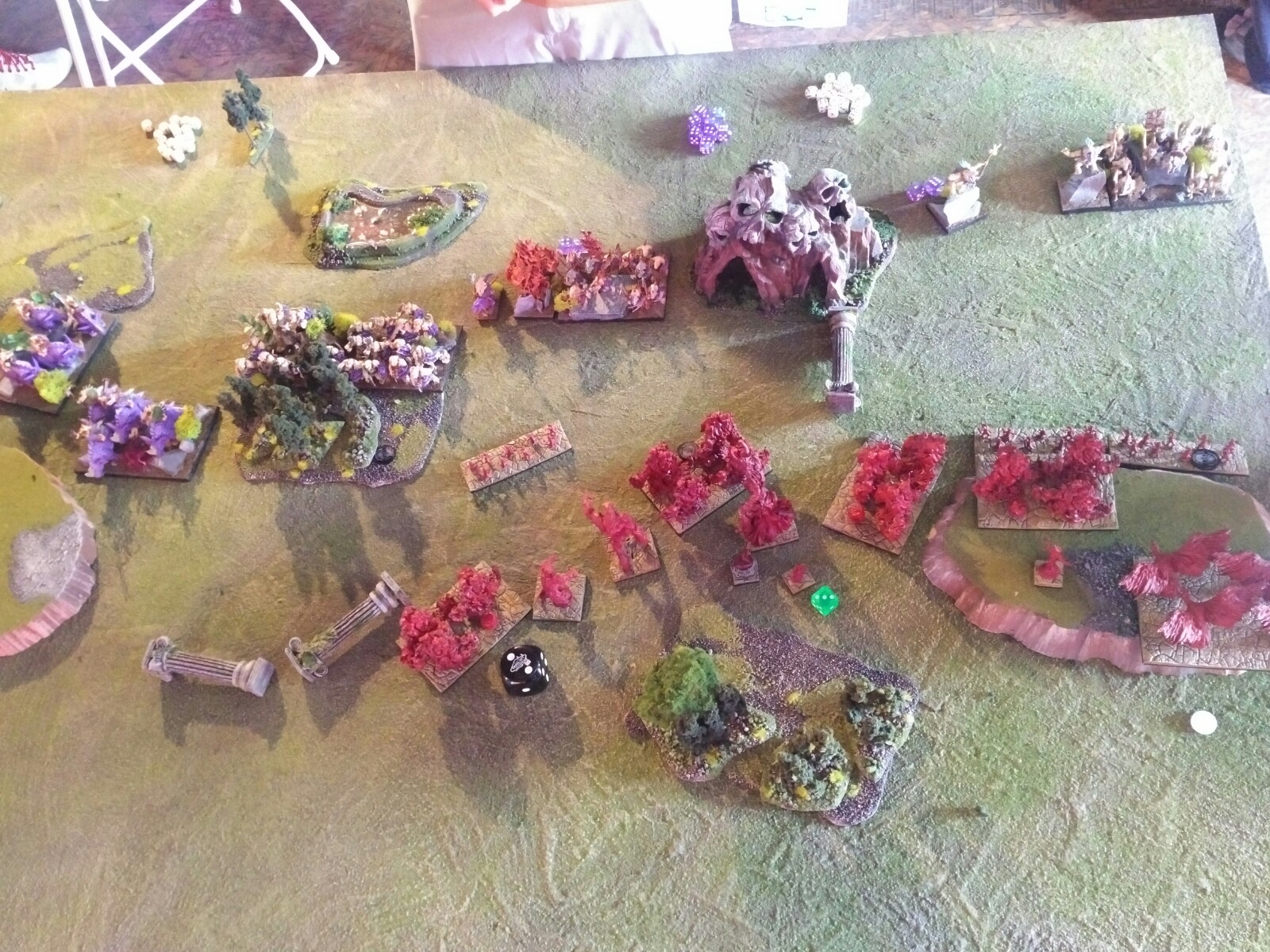 Bloodfire 2: The Ancients at the center his line take significant abuse but hold (Clan Lord’s Rally(2) is real) 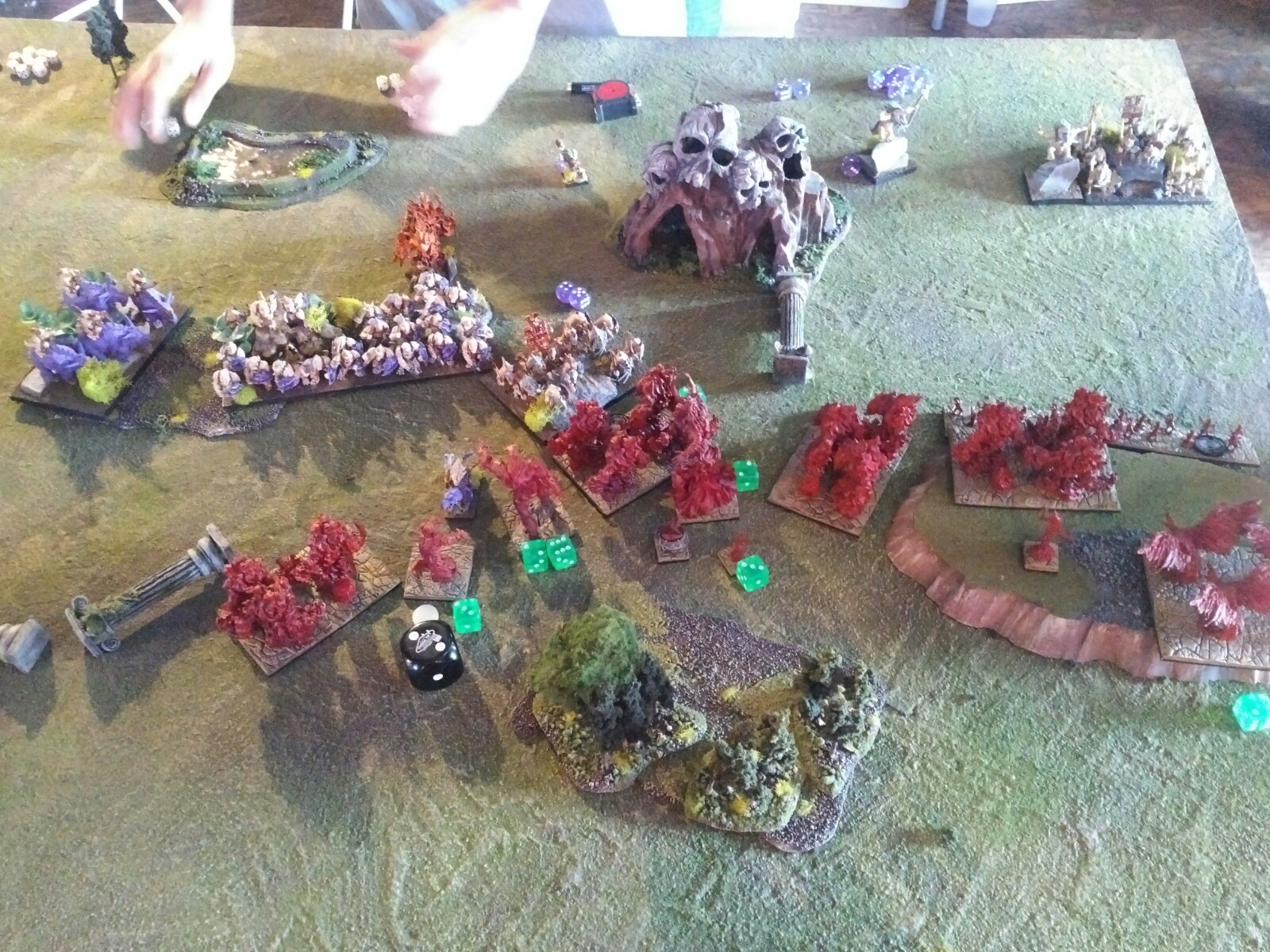 Salamanders 2: Wounded Ancients bounce off my Courage Fire Elementals, his Jarraiders + Agnih mangle the CLOFD, somebody hurts my Agnes, and the Clan Lord shoots into my Lekidon and wavers it 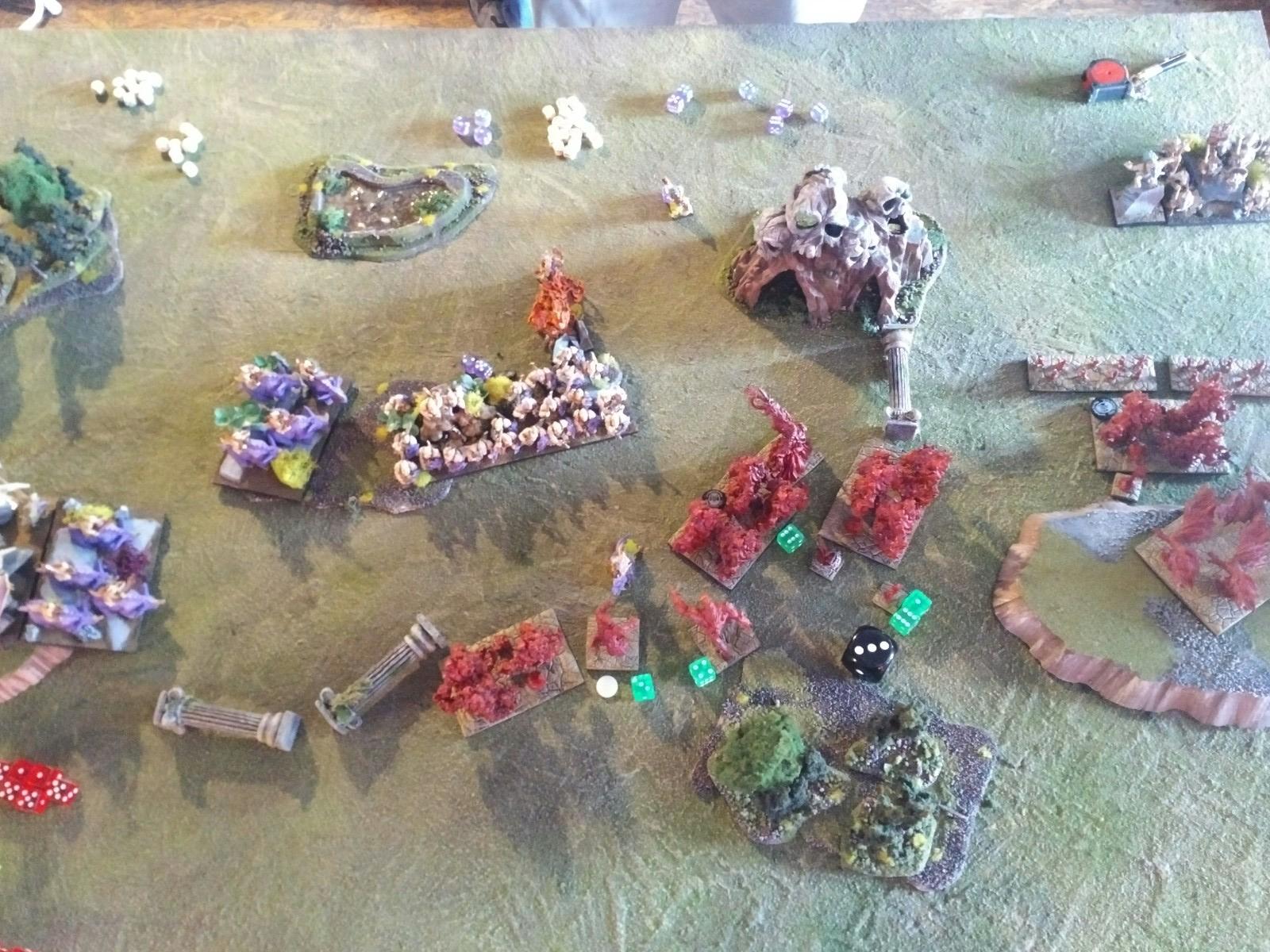 Bloodfire 3: Central Ancients die to Fire Elementals + Agnes, CLOFD is Martyr’d down and focuses the Prime horde, one of his Lekelidons is dropped by Jarraiders (two turns late) 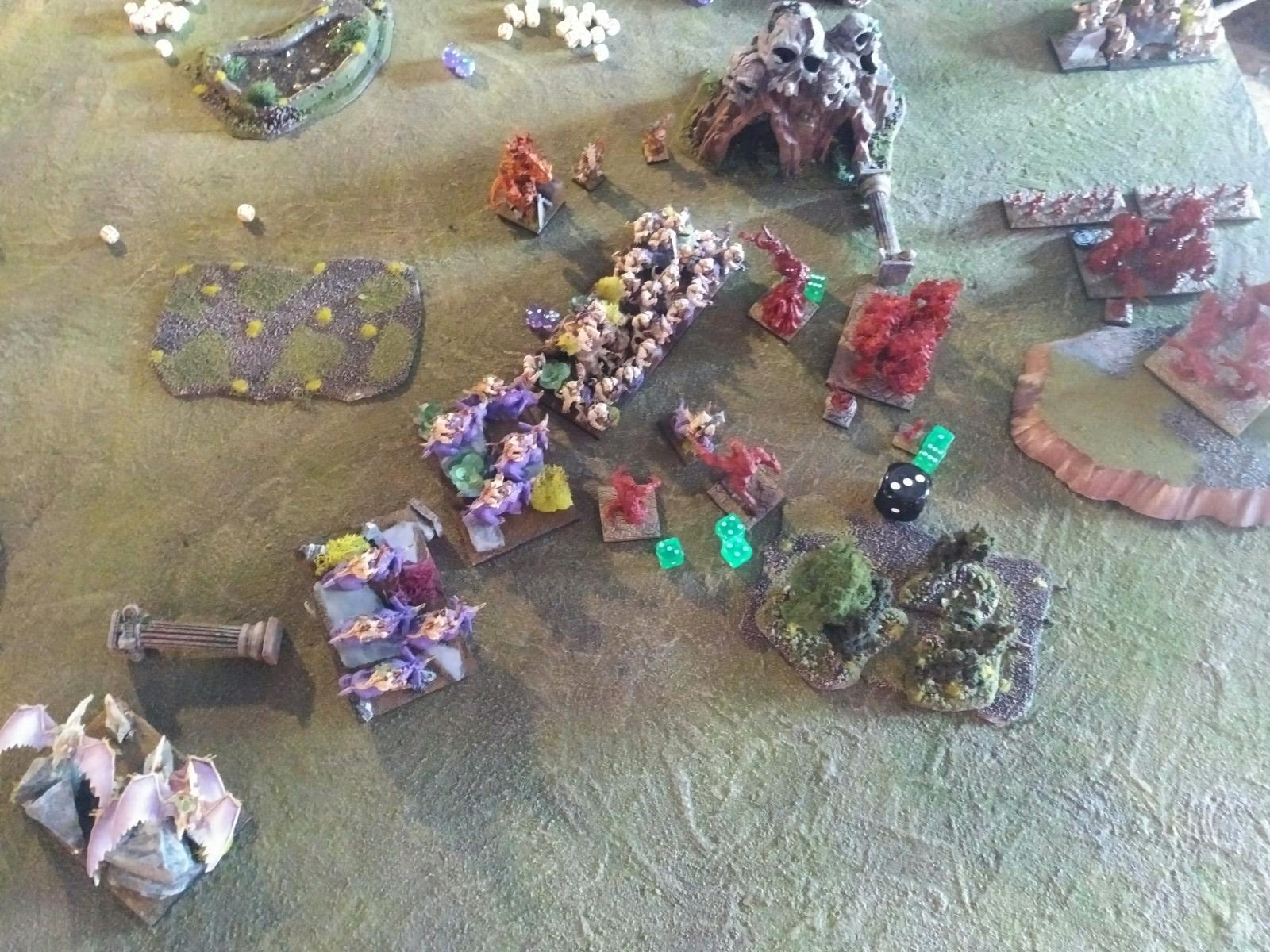 Salamanders 3: Because I didn’t rotate my lower left Fire Elementals, they cop Rhinodons in the front and flank, evaporating and putting the Rhinos into me a turn ahead of schedule (I am totally screwed now); Primes tear apart the Courage Fire Elementals, the CLOFD is torn into by his Clan Lord, and Agnes begins to absorb fire from his Agnih + possibly Jarraiders 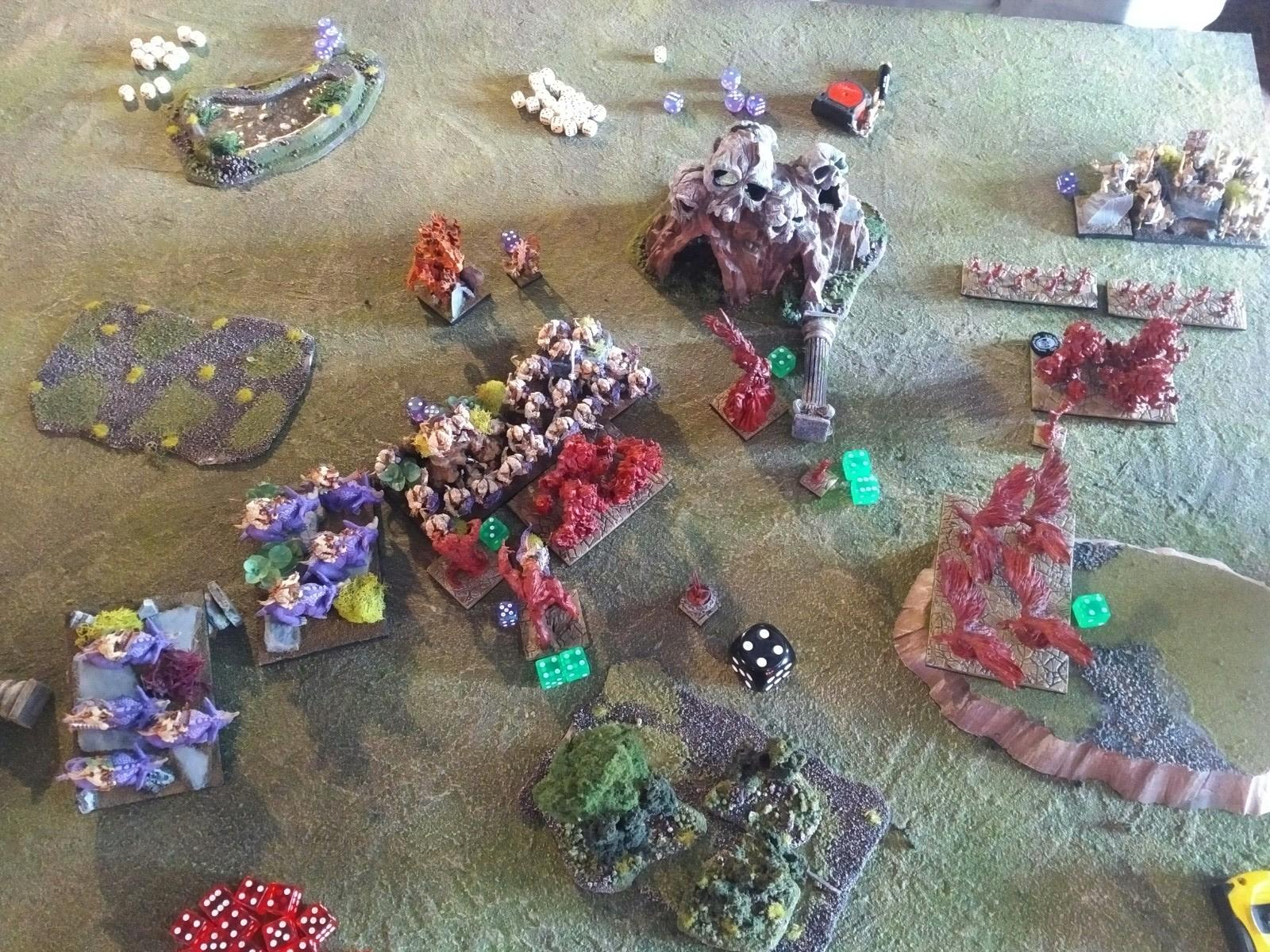 Bloodfire 4: My Lekidon + Fire Elementals charge into the Primes, CLOFD counters the Clan Lord, Agnes removes his Martyr Priest and the right is thoroughly chaffed up with Sprites breathing on the remaining Lekidon with poor results; my Jarraiders shove some damage on his other Priest 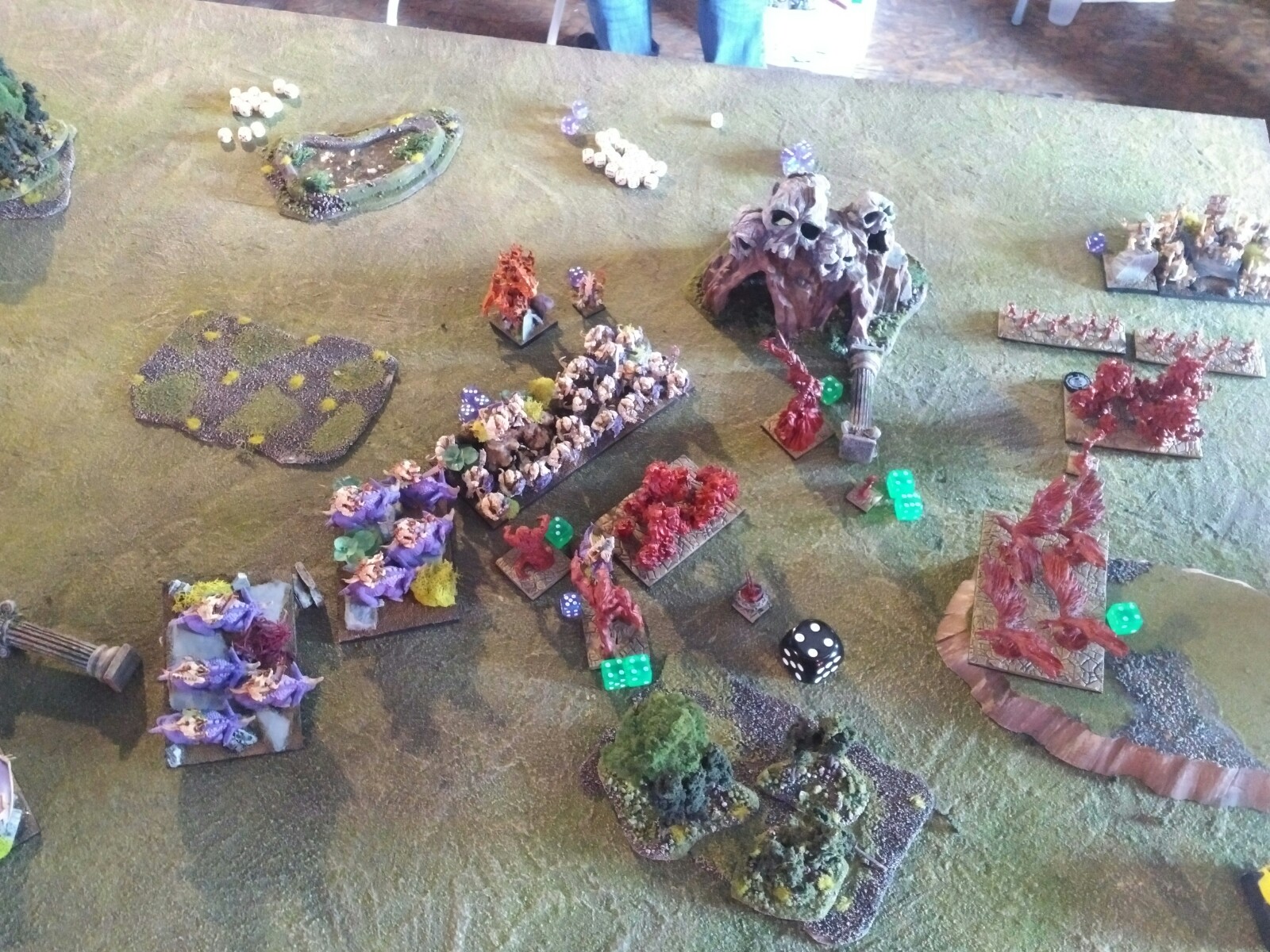 Bloodfire 4: The Primes hold on 13 damage 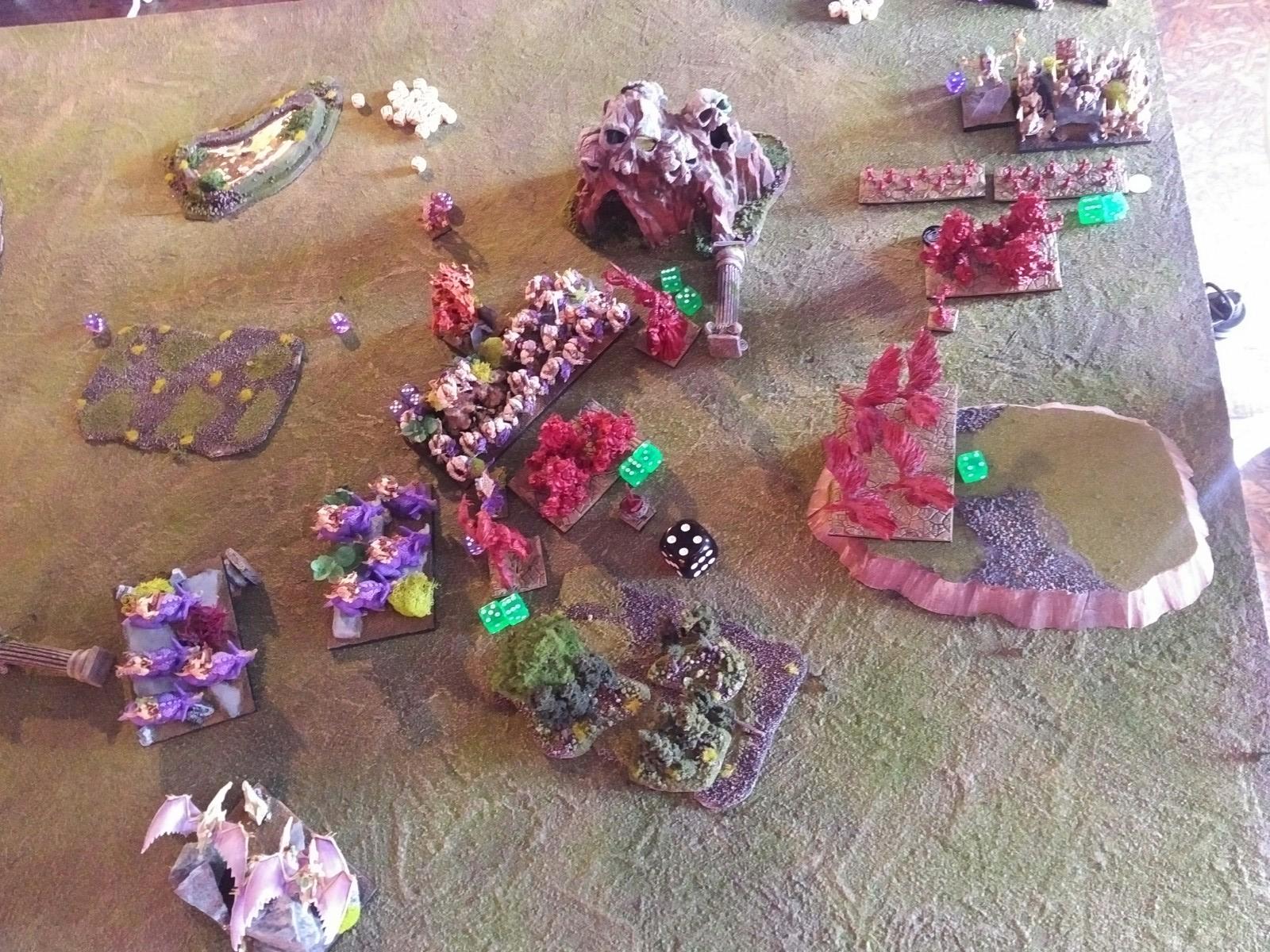 Salamanders 4: Rhinodons + Primes remove the blocking Lekidon, shooting brings the central Fire Elementals to 9 and Agnes to 11 and kills my Martyr-Priest, the Clan Lord smacks the CLOFD around and on the right his Ancients waver some Sprites 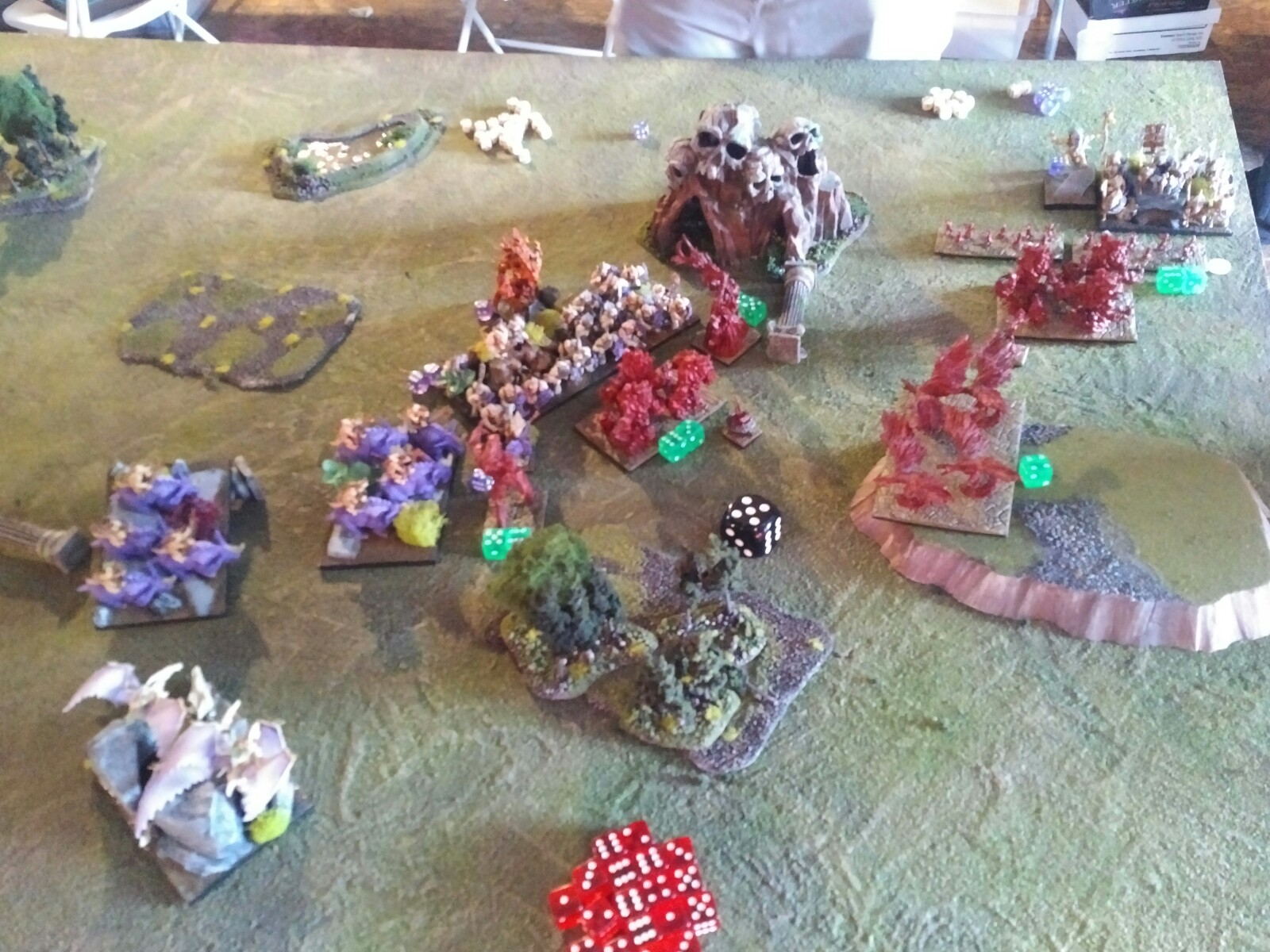 Bloodfire 5: My Jarraiders murder his other Mage-Priest, the CLOFD swings again at the Clan Lord, Agnes chunks 5 damage off his Agnih and the smoldering Fire Elementals swing into the Primes … for only 4 damage (17 total), which is enough to waver them 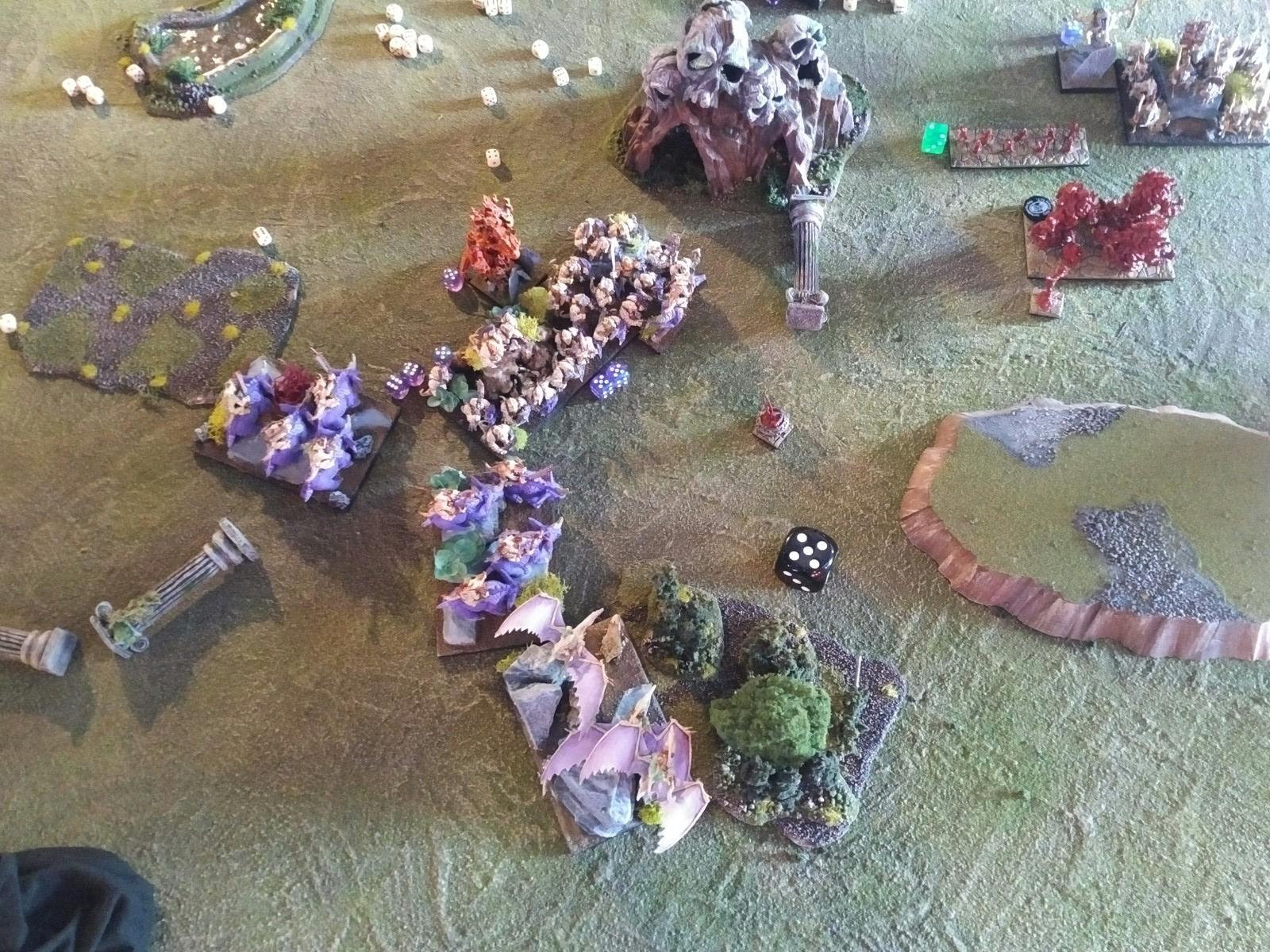 Salamanders 5: Rhinodons flank the CLOFD, Agnih evaporates the Fire Elementals, his Jarraiders roll hot fire and drop my Jarraiders, and his Clan Lord shoots the 1″ gap between Primes and Fire Elementals to charge and kill Agnes; also those Ancients killed their Sprites *golf claps* (Agnih has both of his tokens at this point) 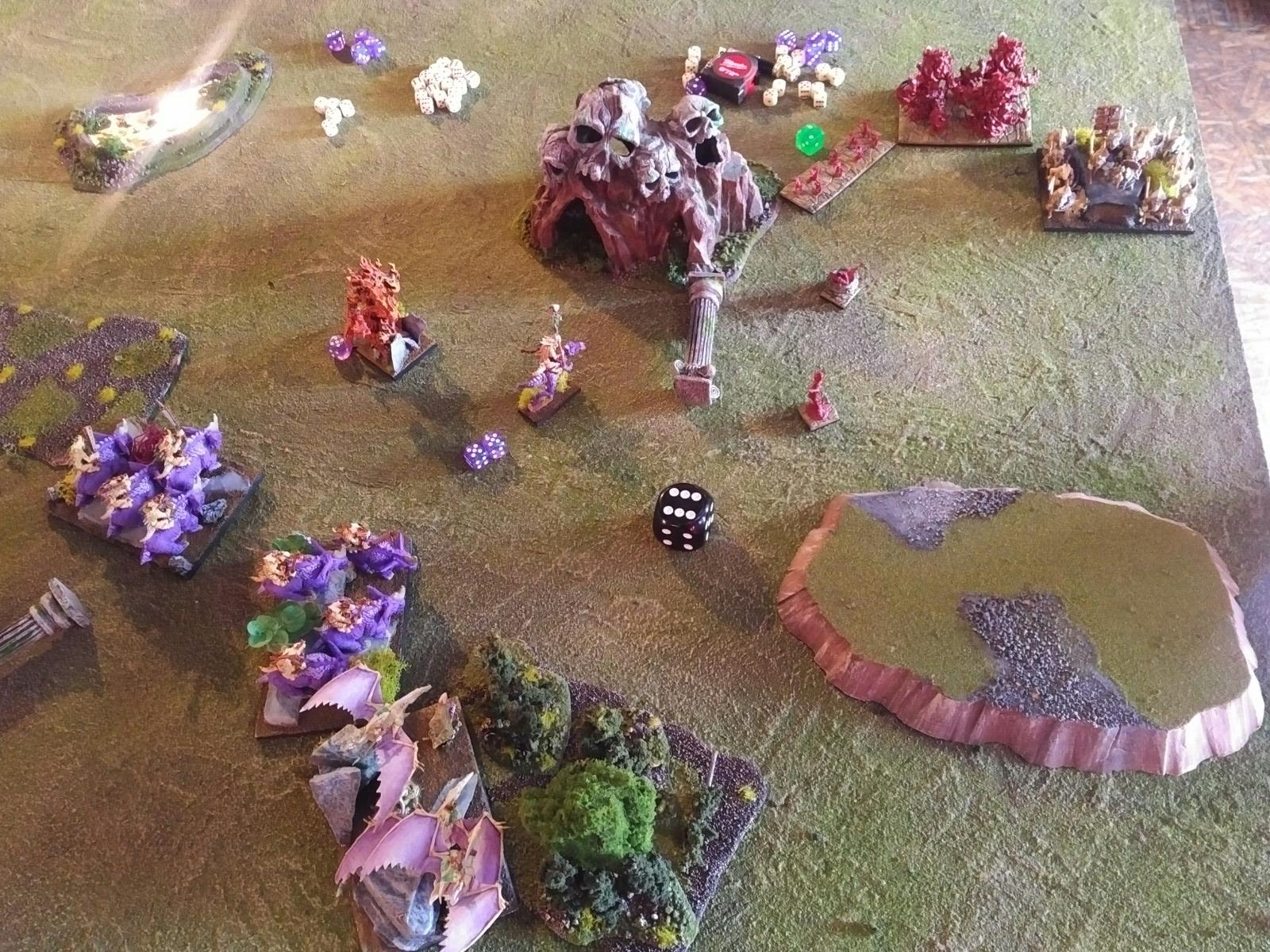 Bloodfire 6: Fuuuuuuuuuu— The last of the Fire Elementals run over his Lekidon on their way outta here (with a token), as Sprites and characters scramble for safety 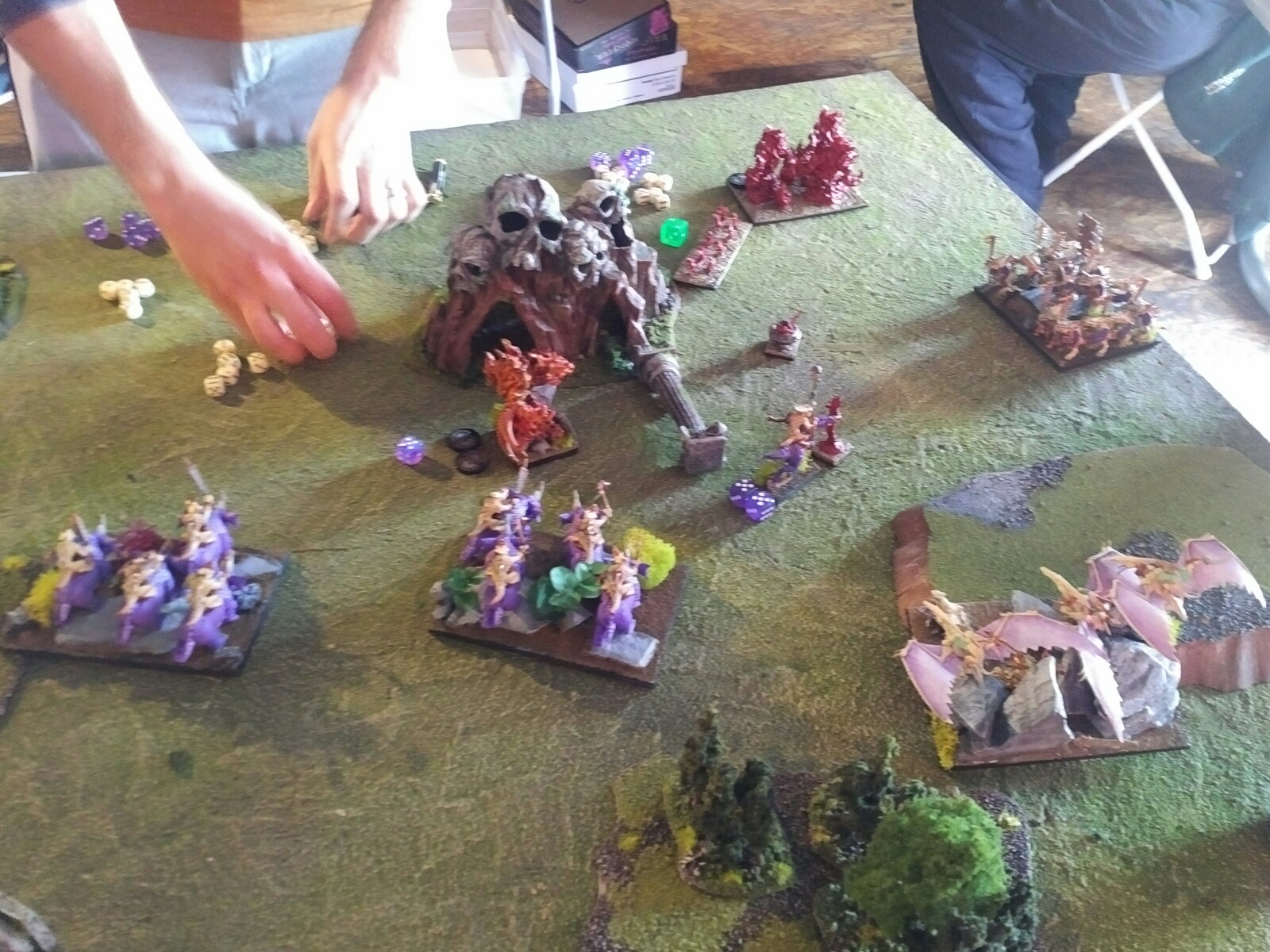 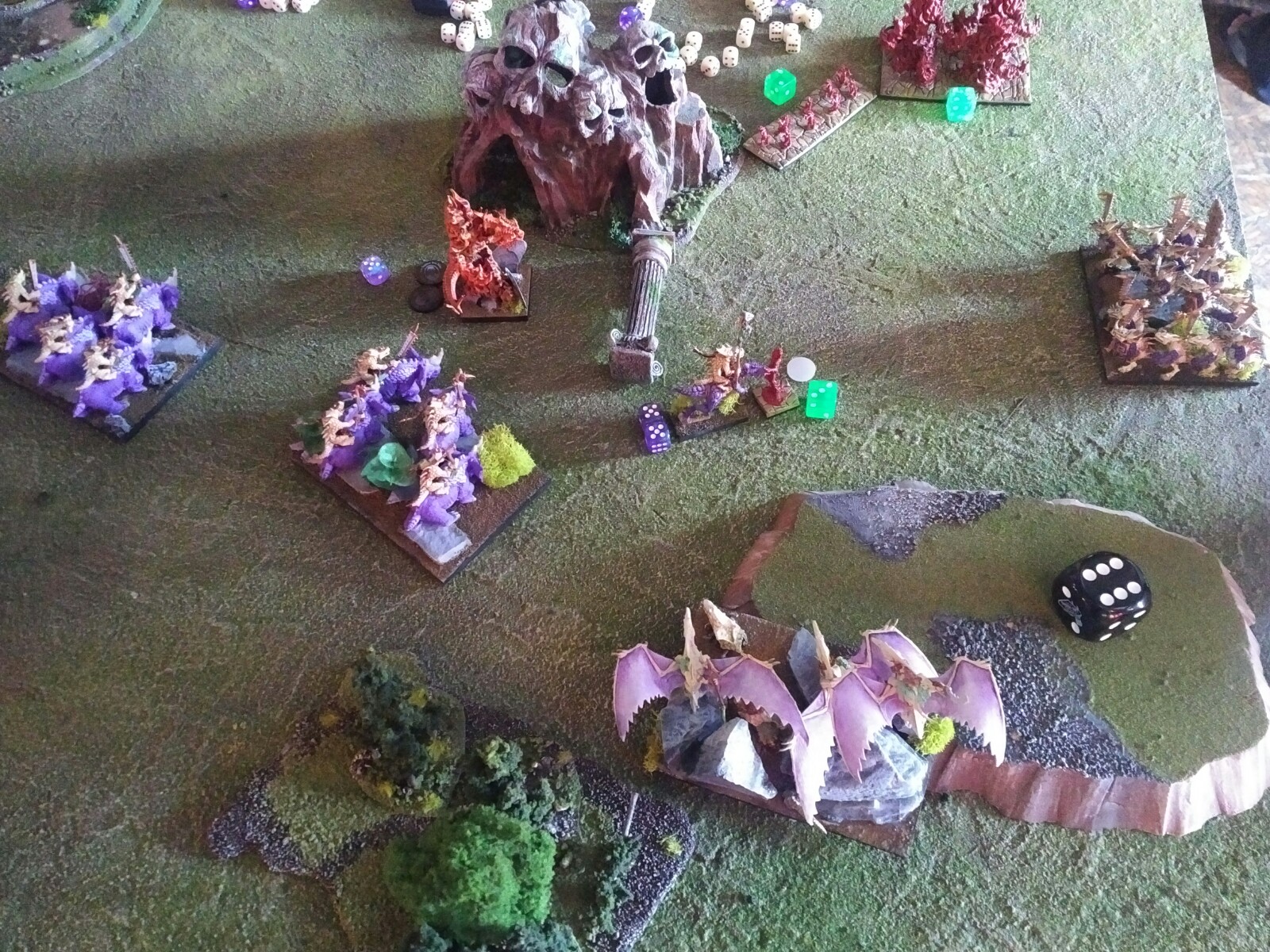 Salamanders 6: … and the Herald dies one last time, but Jarraiders can’t stop my scoring Fire Elementals and the De 5+ Priest holds

All the same, this was a stunningly fitting way to end the event, after slogging through four evil armies helmed by great dudes to play the other Salamander and have them hand me my fiery butt. Also note that this is the first and last time Bloodfire has played against Salamanders. So damn narrative it gives me chills.

I’m not sure what my final record was (2-1-2 or 1-2-2) but as always for me, all but my last games were quite close, which meant low scores either way. I ended up with 44/105 battle, although I’m sad to see I was tanked on painting, tying with a partially painted army for worst paint. That’s … really frustrating, however I guess all the more reason to move on from this army. People either get it or they don’t, and more often than not paint judges don’t (7 points here isn’t as bad as what I got at Unplugged 2017!) Crunching the numbers, it wouldn’t have changed my placing much either way, still putting me in the bottom third.

Anyhoo, that’s Orc Town GT done and finally dusted! Good time in a far away ocean-side land, and officially the end of the road for Bloodfire. I’ll do a retrospective when I get the chance to take some lightbox photos of the army, but I won’t be playing them for a while, or if I do it’s mostly to mess around with KOW 3E when somebody needs a loaner army.