There’s a magical thing that happens at most tournaments for me, where I’ll chat a person up a whole lot on Day 1, typically about how much I like their army’s models or because it does something cool or whatever, and then get to play them on Day 2. Enter the rat army made entirely out of metal Skaven … 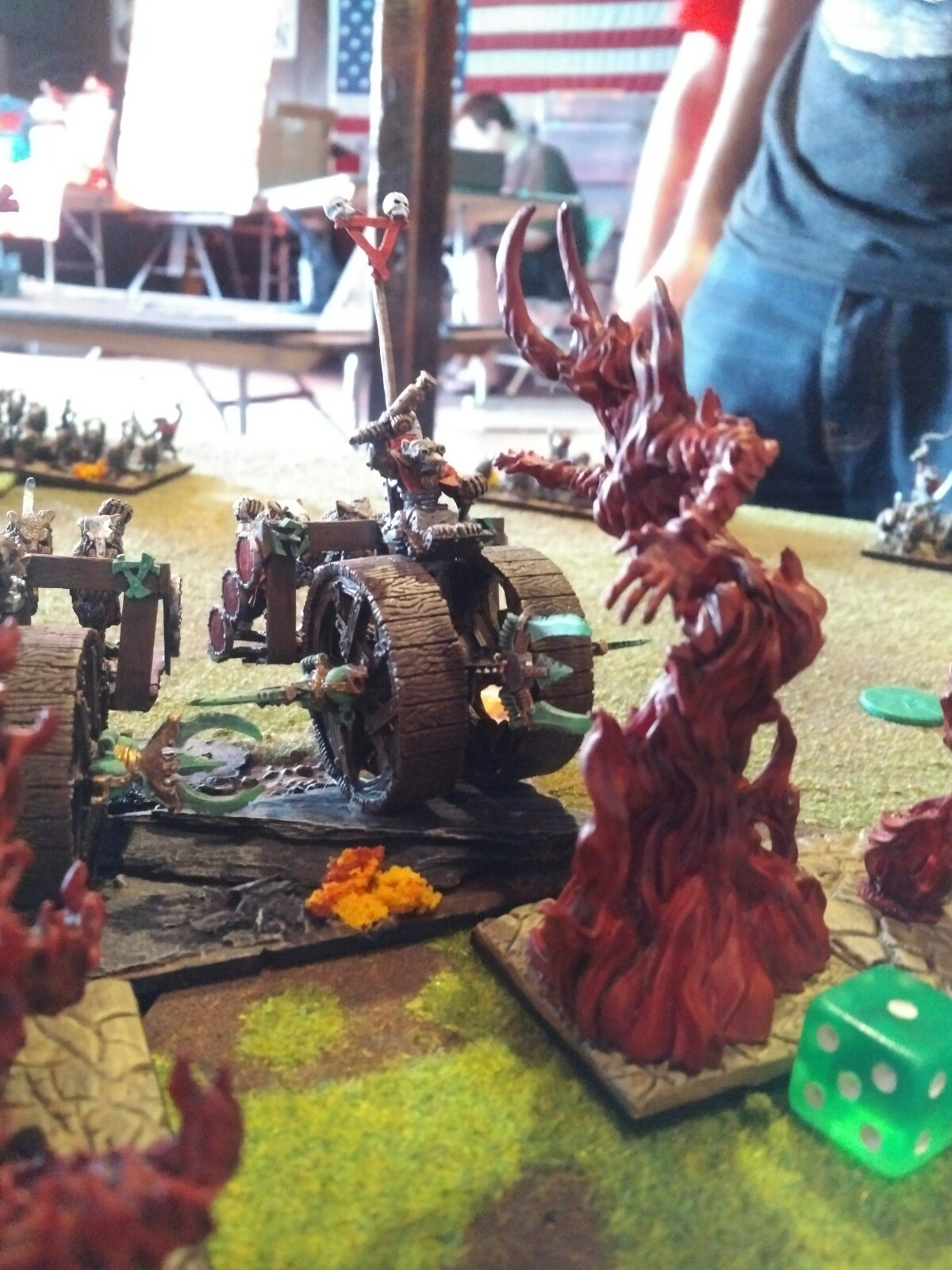 First game of Orc Town Day 2 was against a great Canadian dude with a legit horde of rats – and yep, no inspiring at all. Whoa. I think we played Ransack, but spoilers, it’s all going to come down to the middle three-point objective. Bloodfire grabbed the initiative again.

Round 4 we played on … a table I forgot to take a photo of and then lost the photo of when I went back. Ah well. 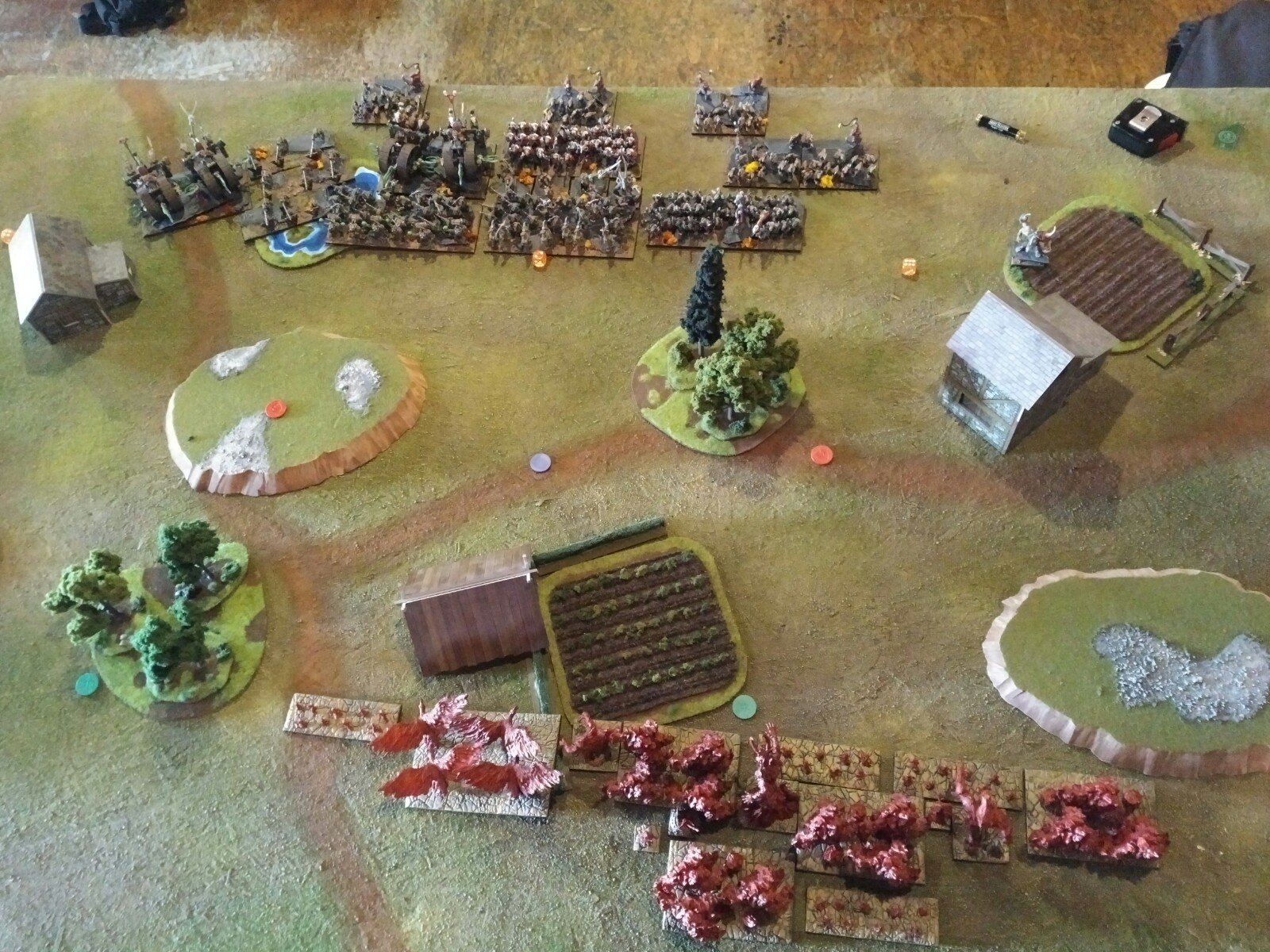 Battlines! Worth noting that his horde order (L2R) is blight, blight, shock (behind blight), shock, slaves (behind stormies), as his blight are nightmares for me (ensnare is horrific for 4+ Me, and my CS2+ means nothing) 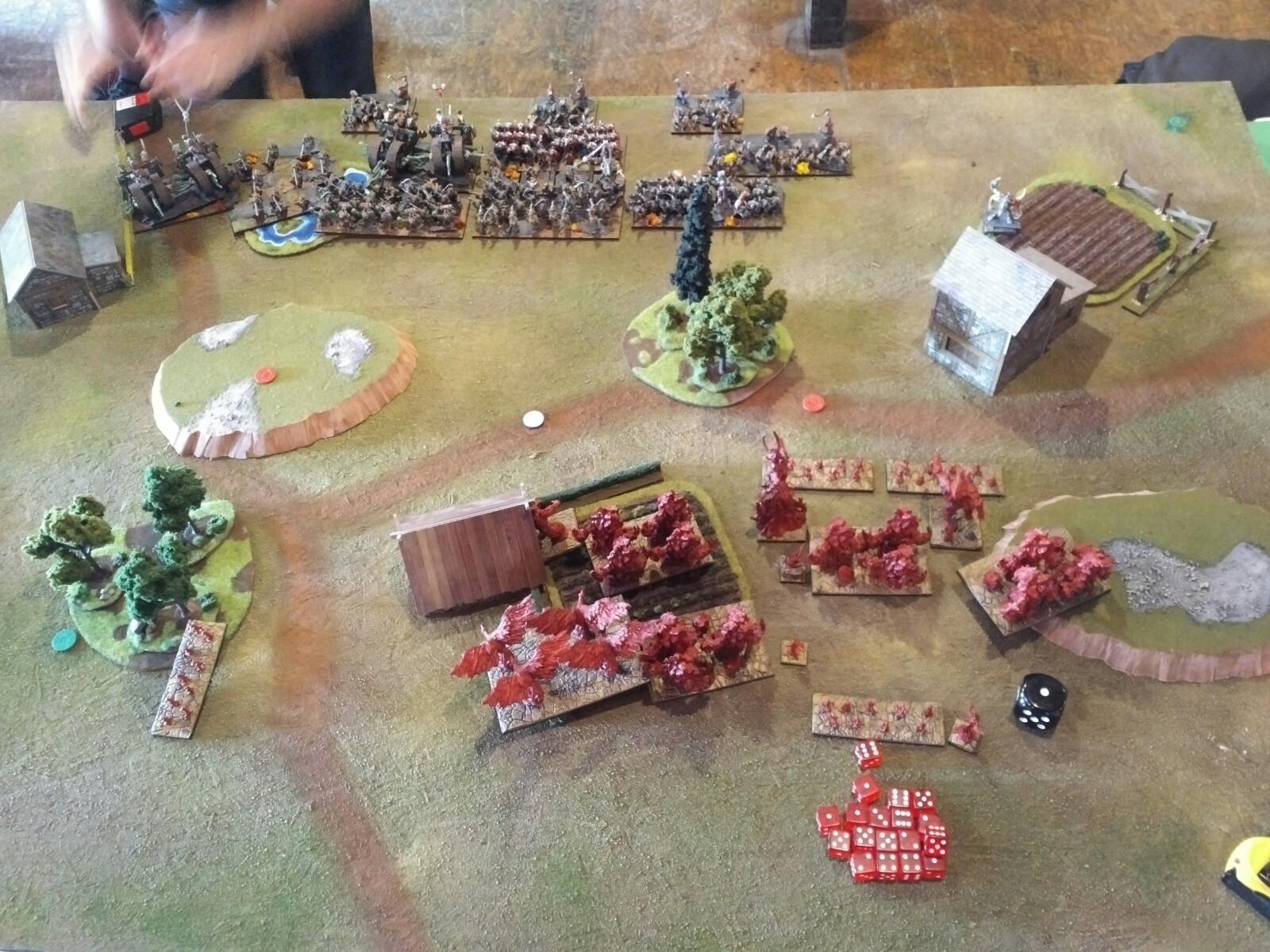 Bloodfire 1: *squishing sounds* Red markers are 2 points, green are 1, blue is 3 (I think) 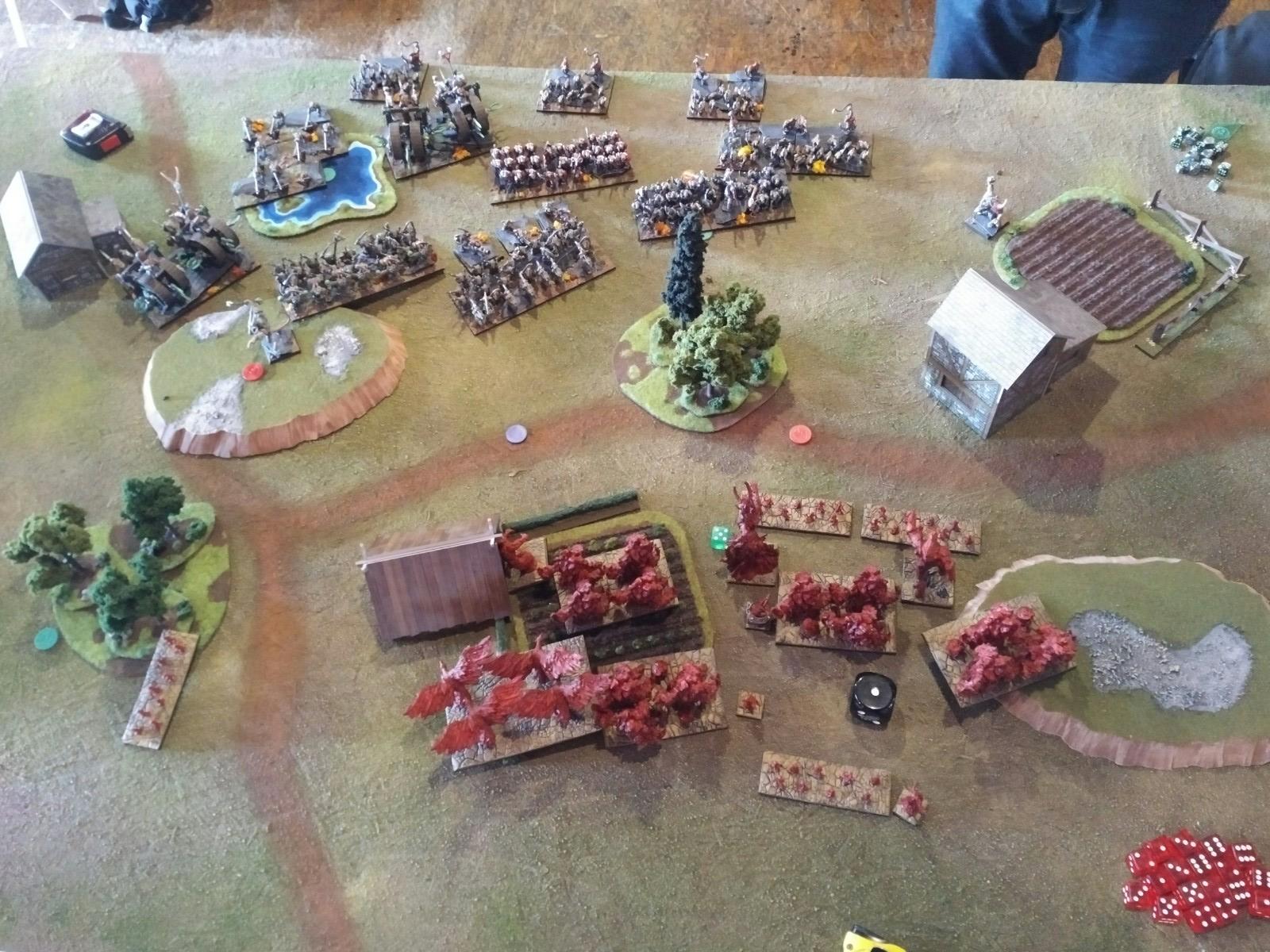 Ratkin 1: His Clawshots all hammered Agnes whenever possible, with this 5 damage opening salvo giving me some fear for her safety! 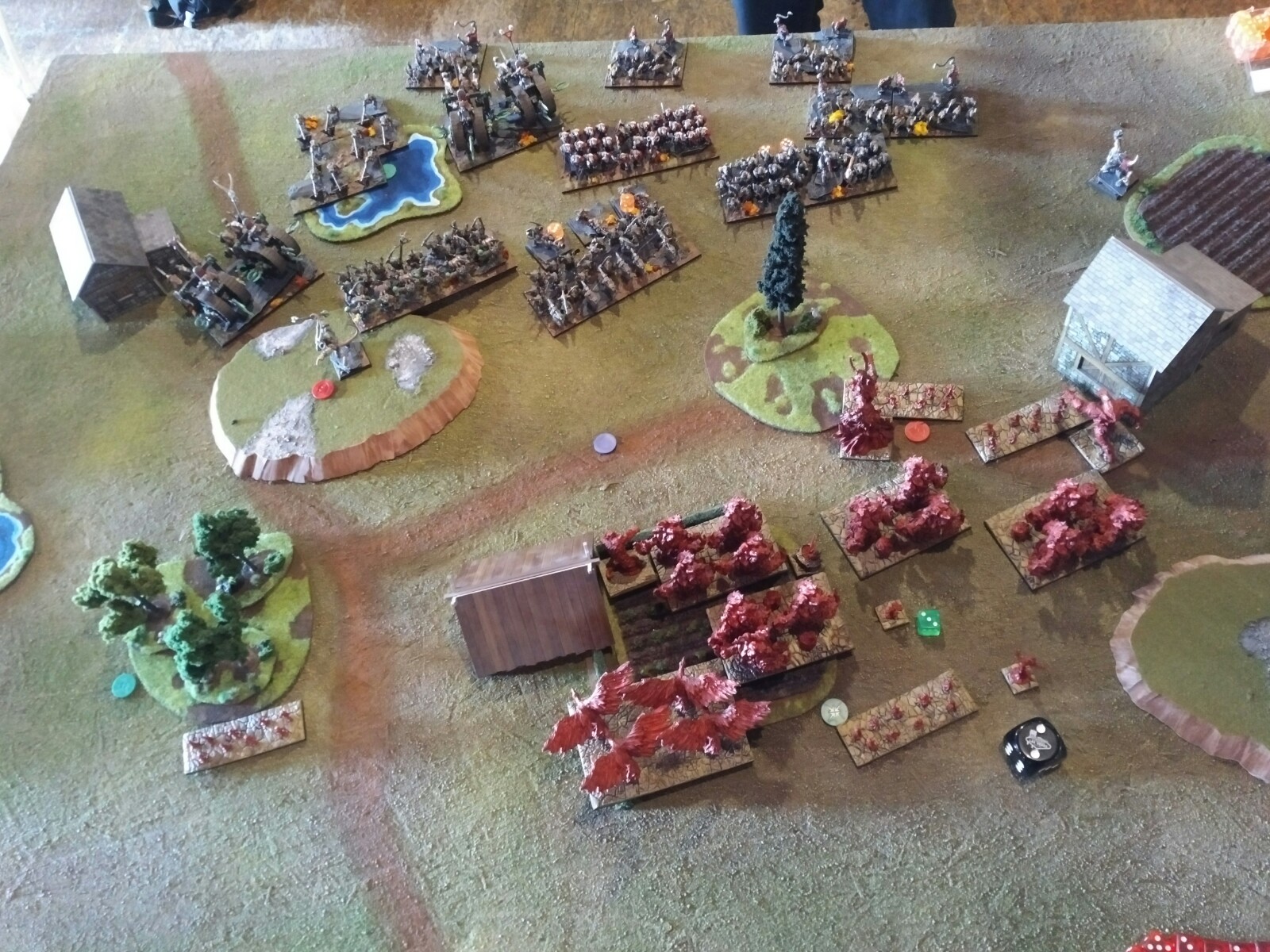 Bloodfire 2: Lots of fire loiters in that field, ready to grind for the center; Agnes and Sprites start breathing on the right Shock Troops as combat approaches (Agnes gets Martyred up and will continue to be so all game long); Jarraiders and Lekelidon shooting goes into uninspired Weapon Teams with medicore results o_o 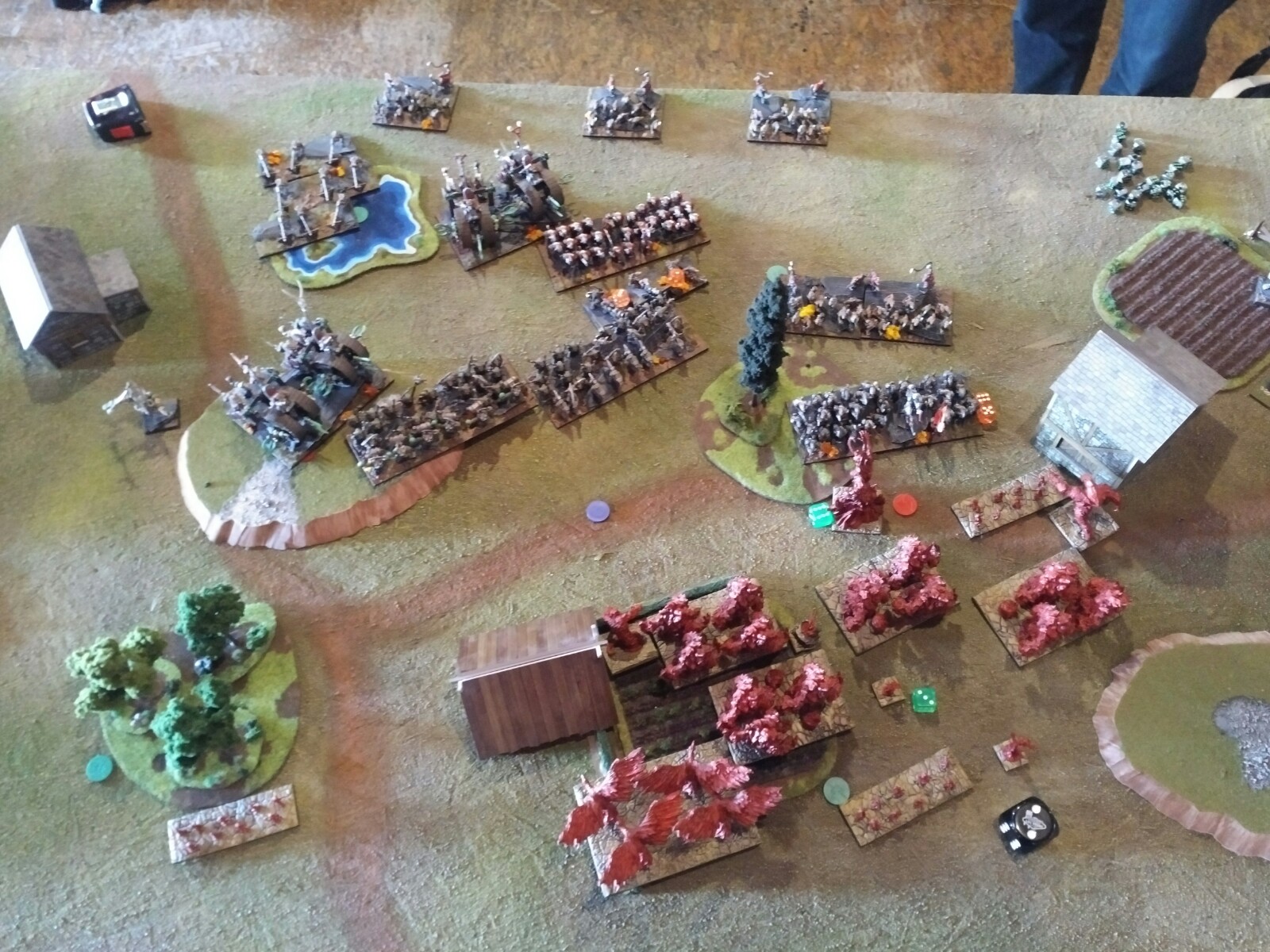 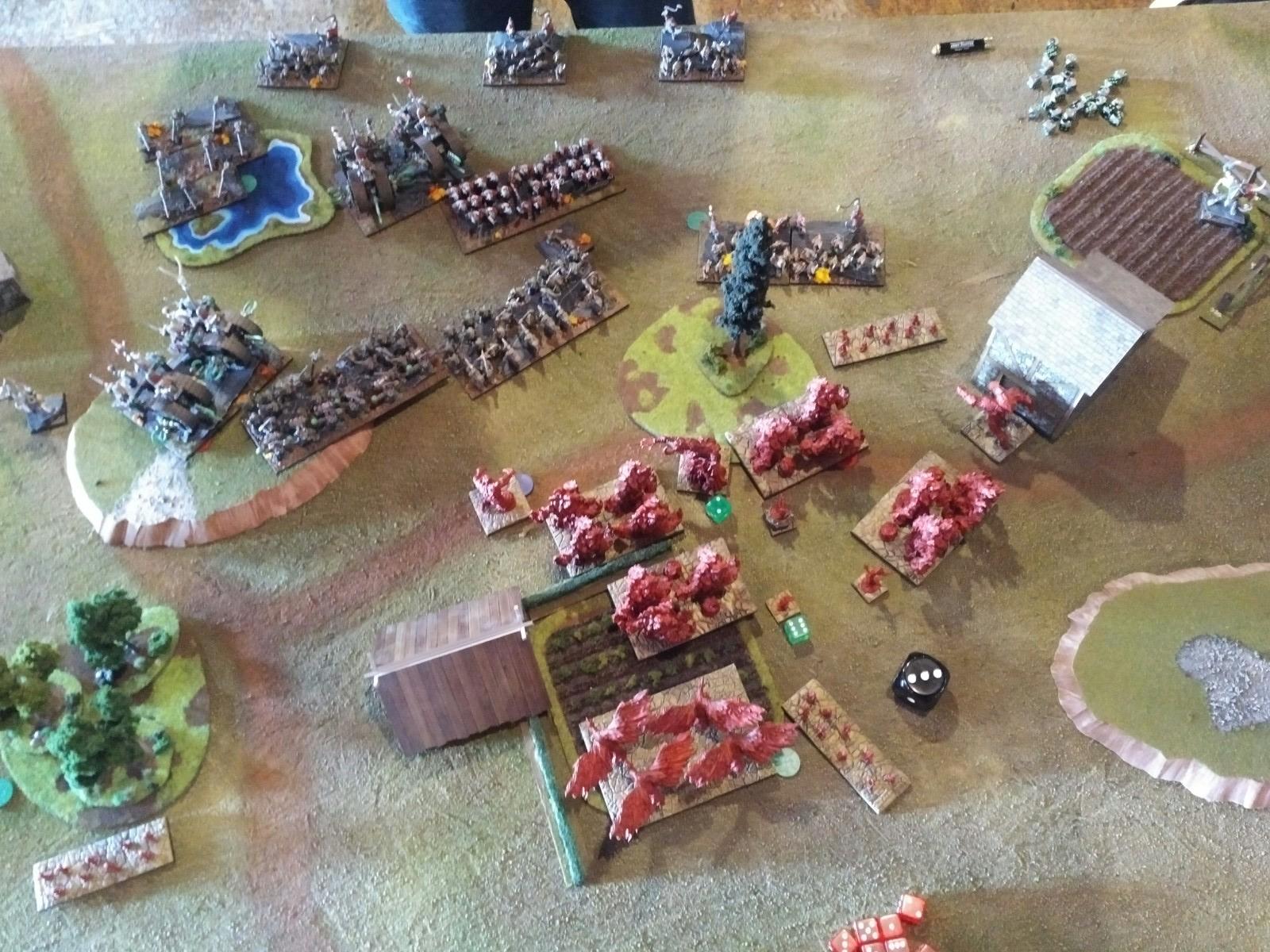 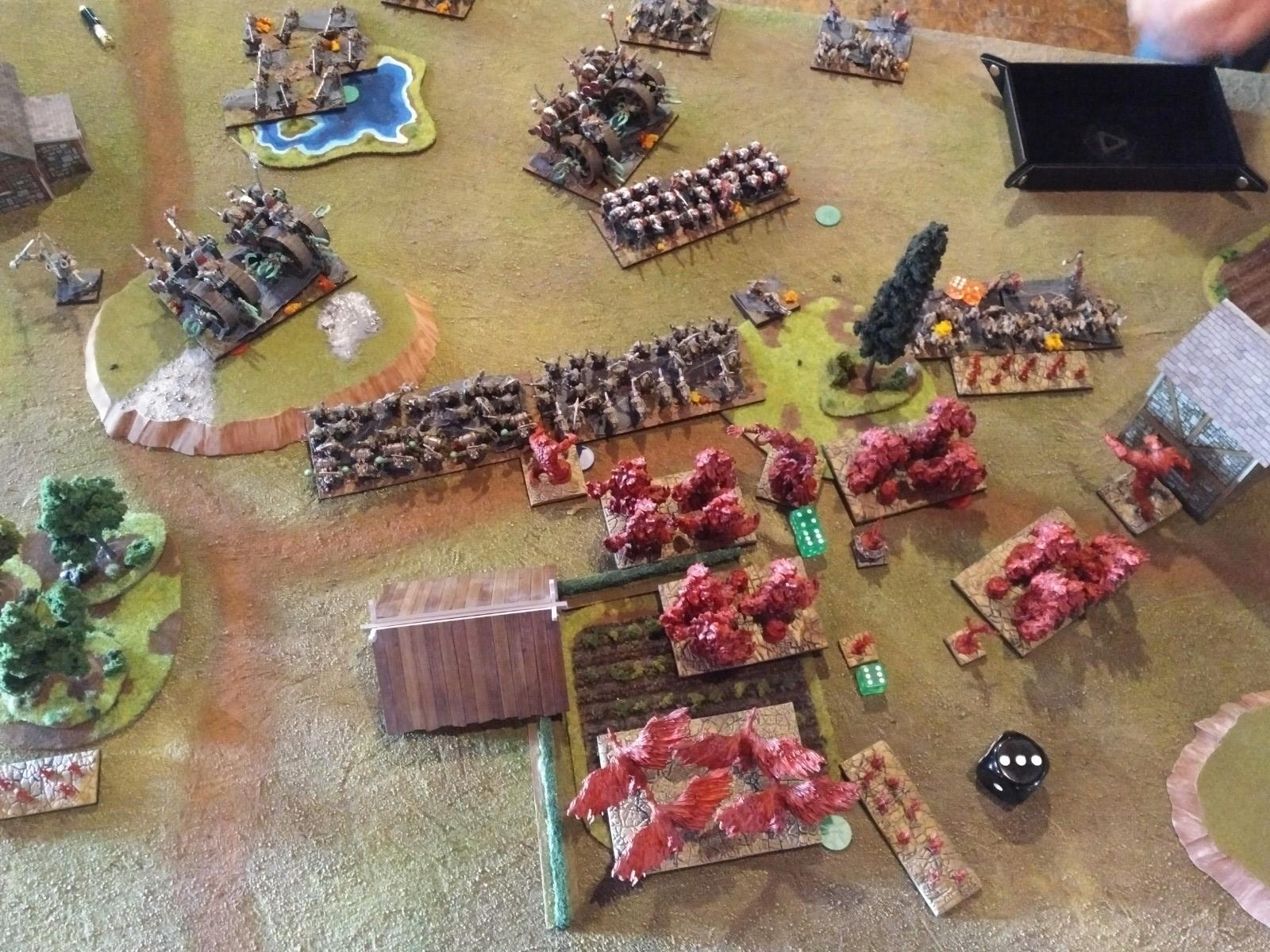 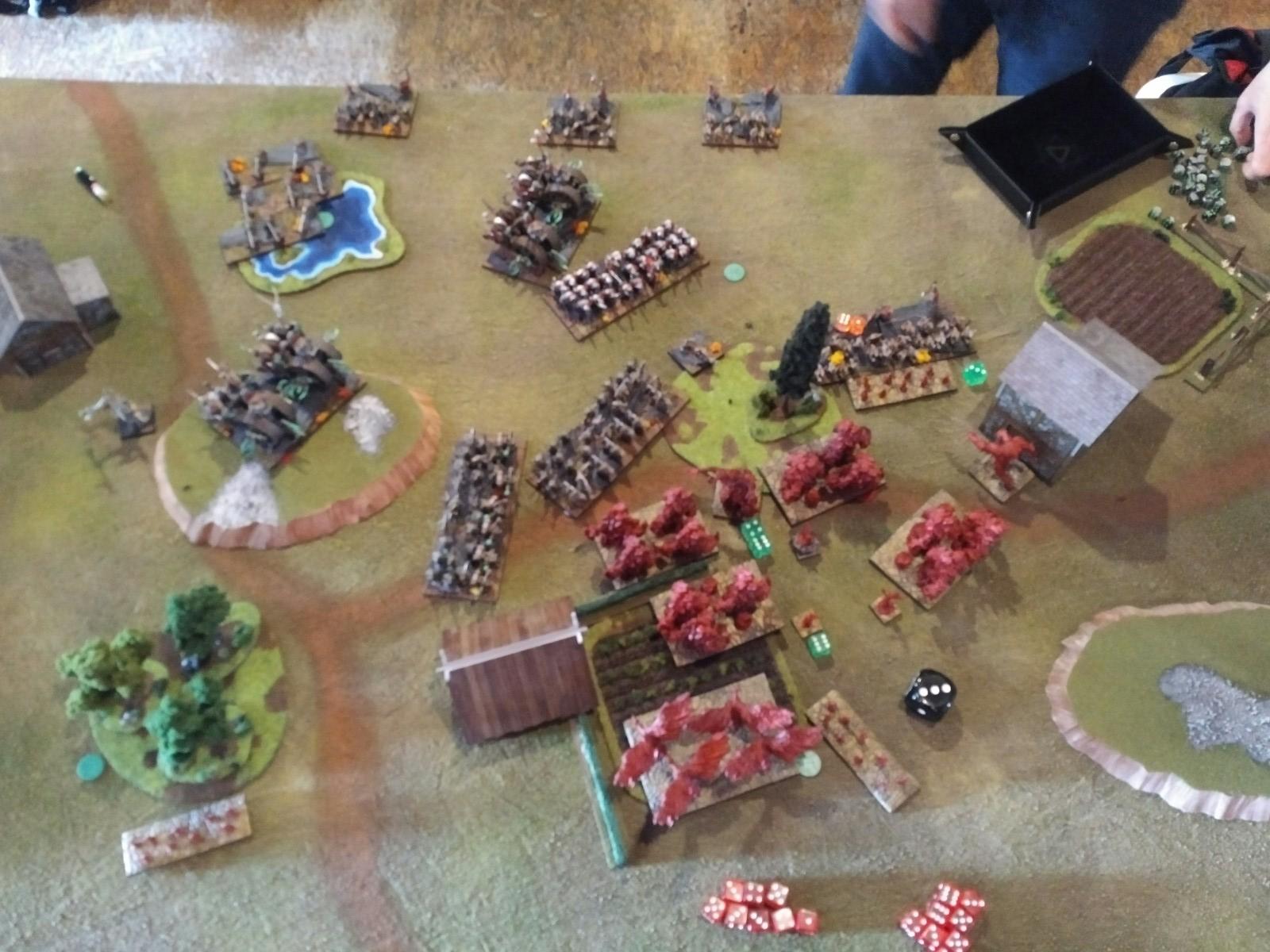 Ratkin 3: Blight reform thusly, as the rat general laments some of his Shock Troop / Blight layering, as the Shock are left out of the action 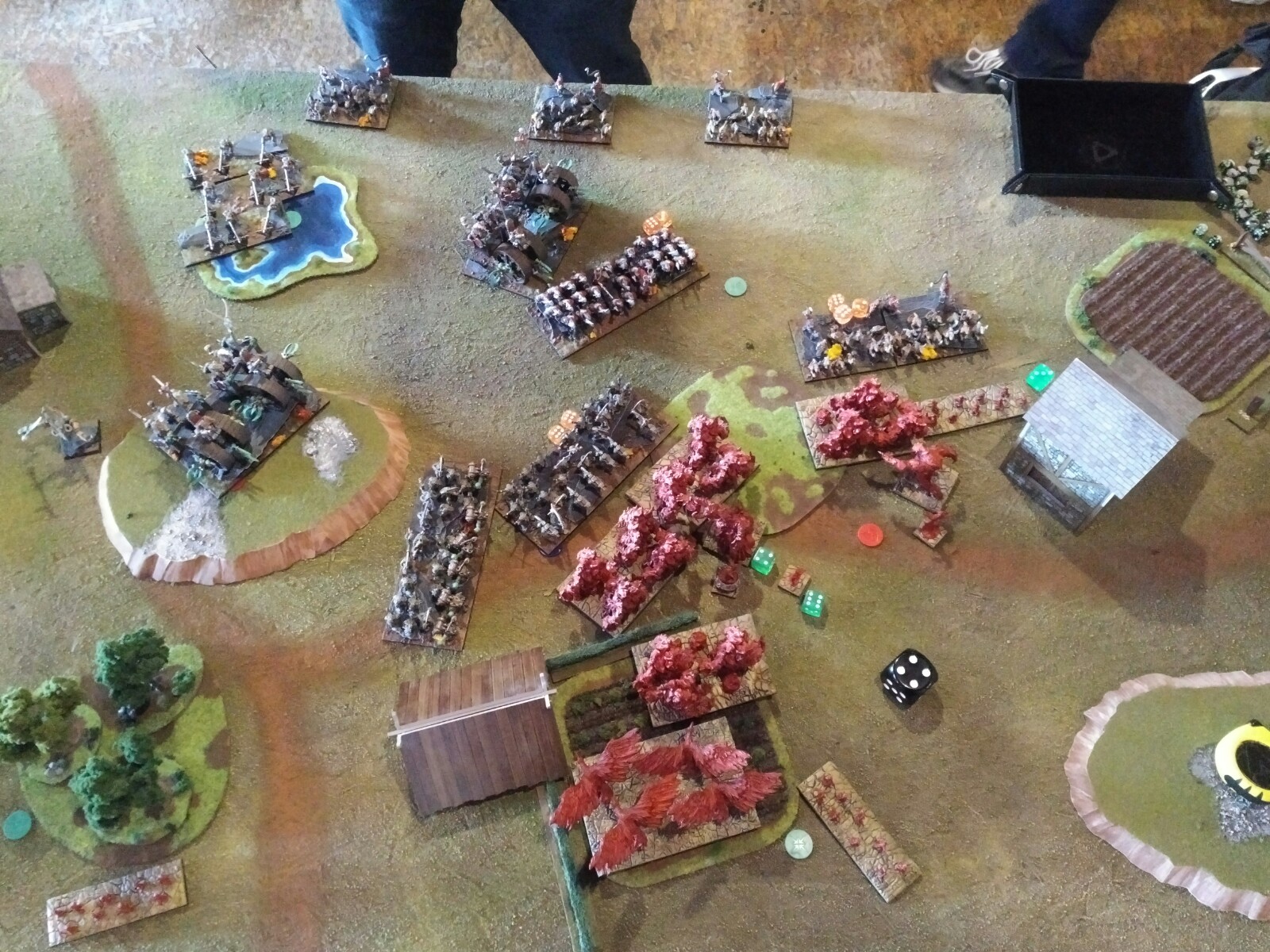 Bloodfire 4: The only way I can deal with Blight to the front is overwhelming force, so two Fire Elemental hordes it is (it doesn’t work); Slaves also hold against Fire Elementals + commando Sprites; Agnes nukes the last Weapon Team as the CLOFD + Jarraiders slam the Shock Troops – you’ll notice Agnes was healed for 6 but the Martyr-Priest didn’t take any, that die appears later when I caught the mistake (she was never targeted anyway) 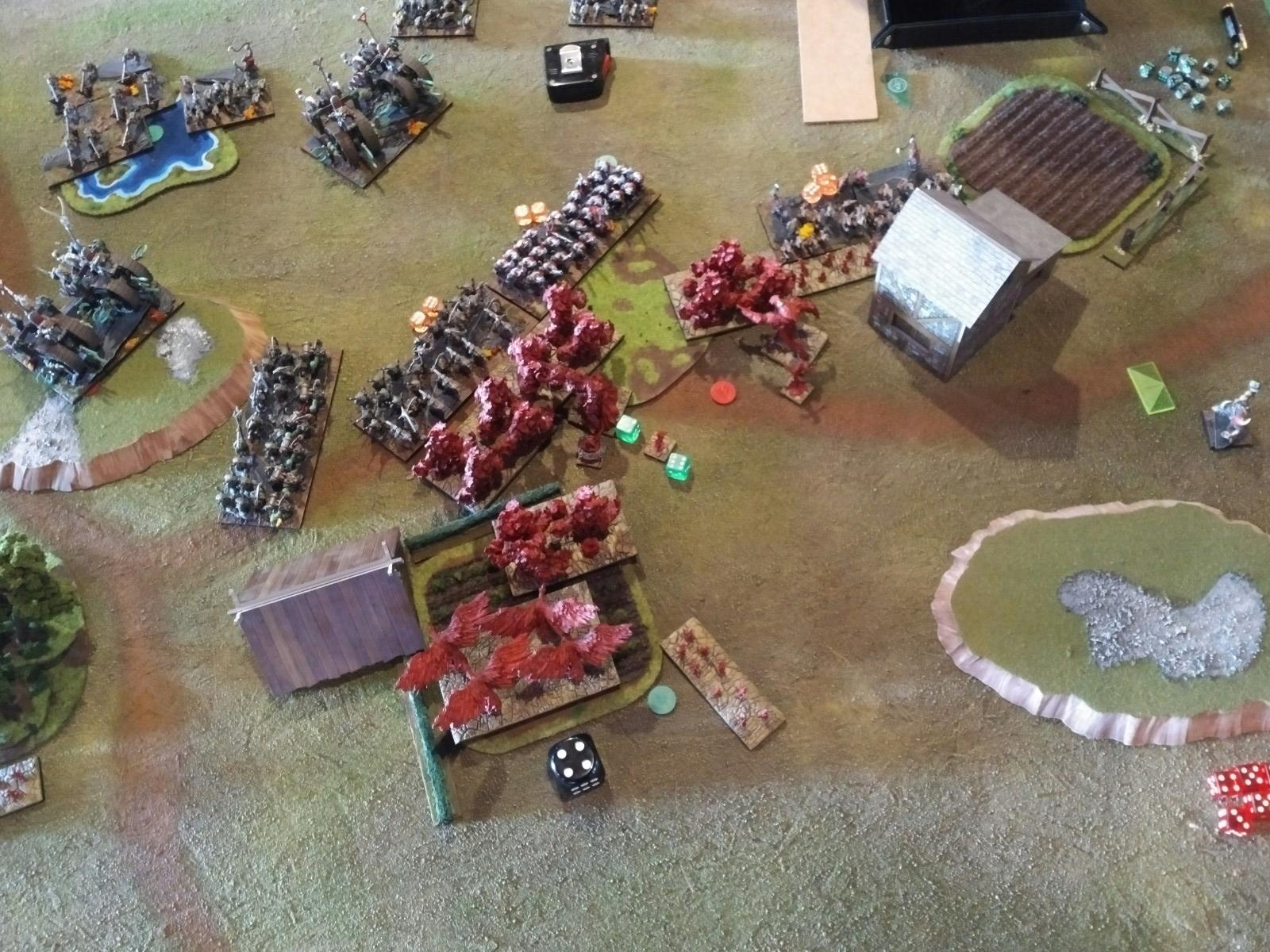 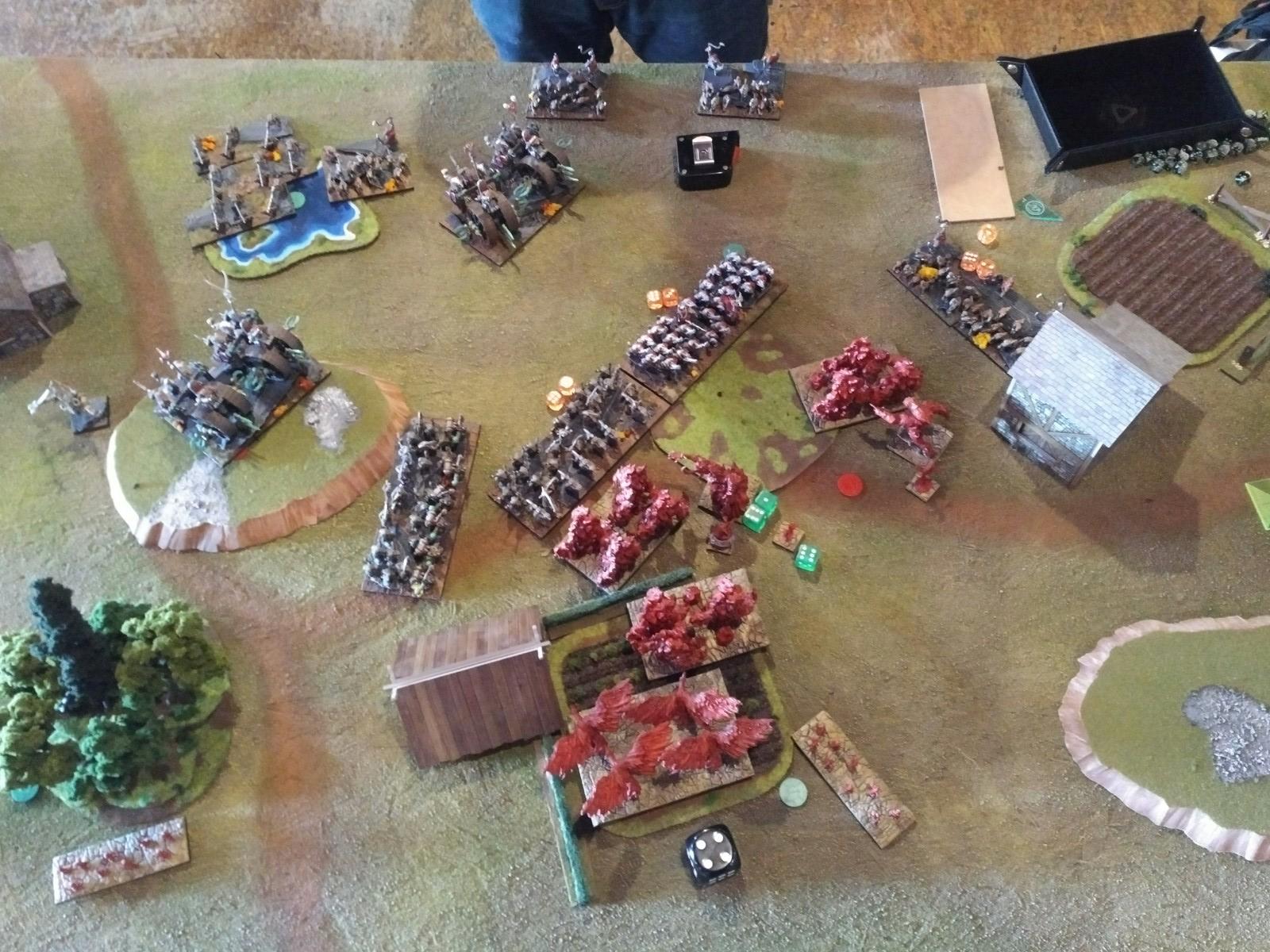 Ratkin 4: Thick brown line with Runners idling behind it! 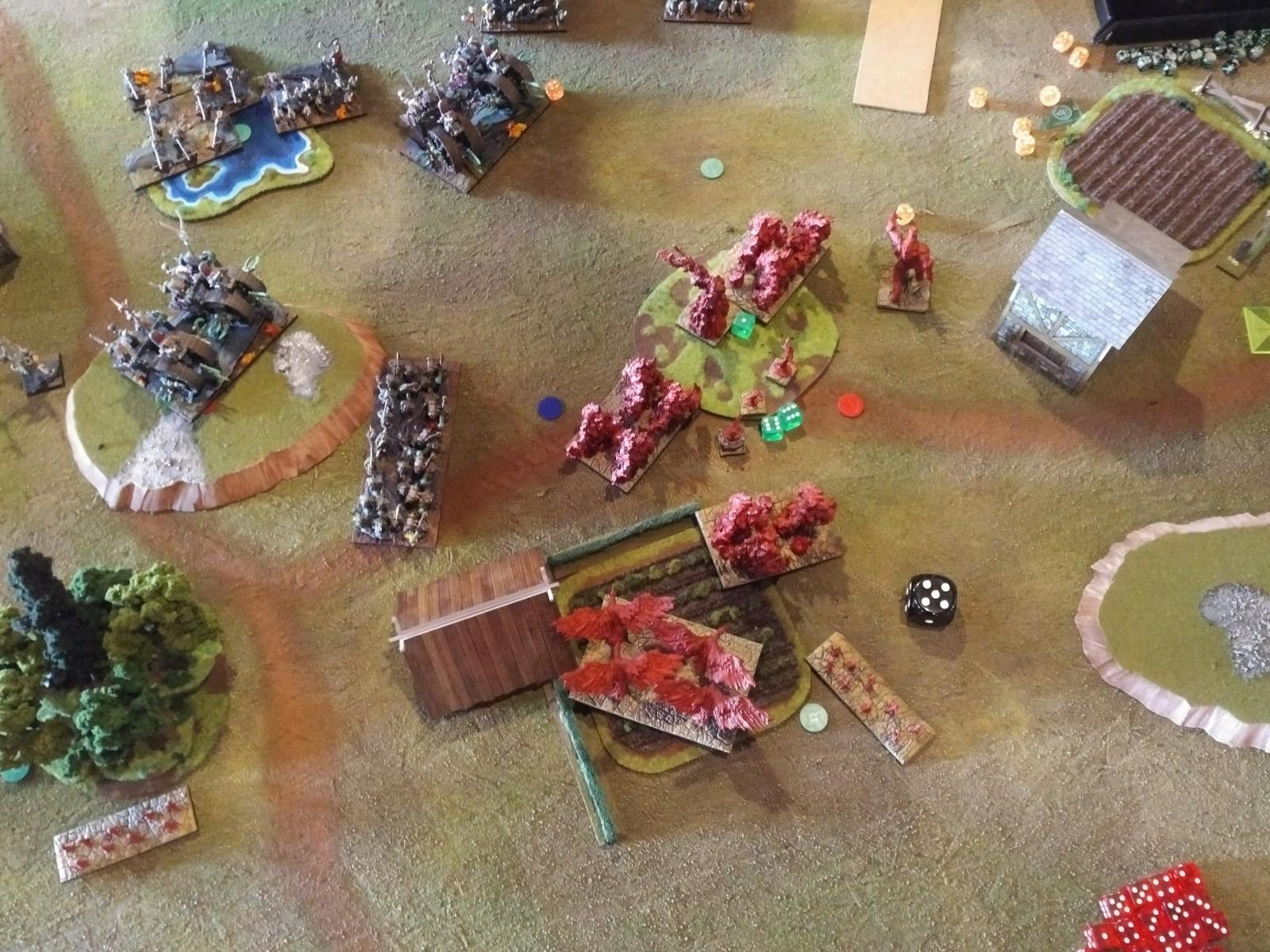 Bloodfire 5: Fire Elementals end the Blight and the Shock Troops, the latter with Agnes’ help, while the CLOFD + Jarraiders burn down the Slave horde 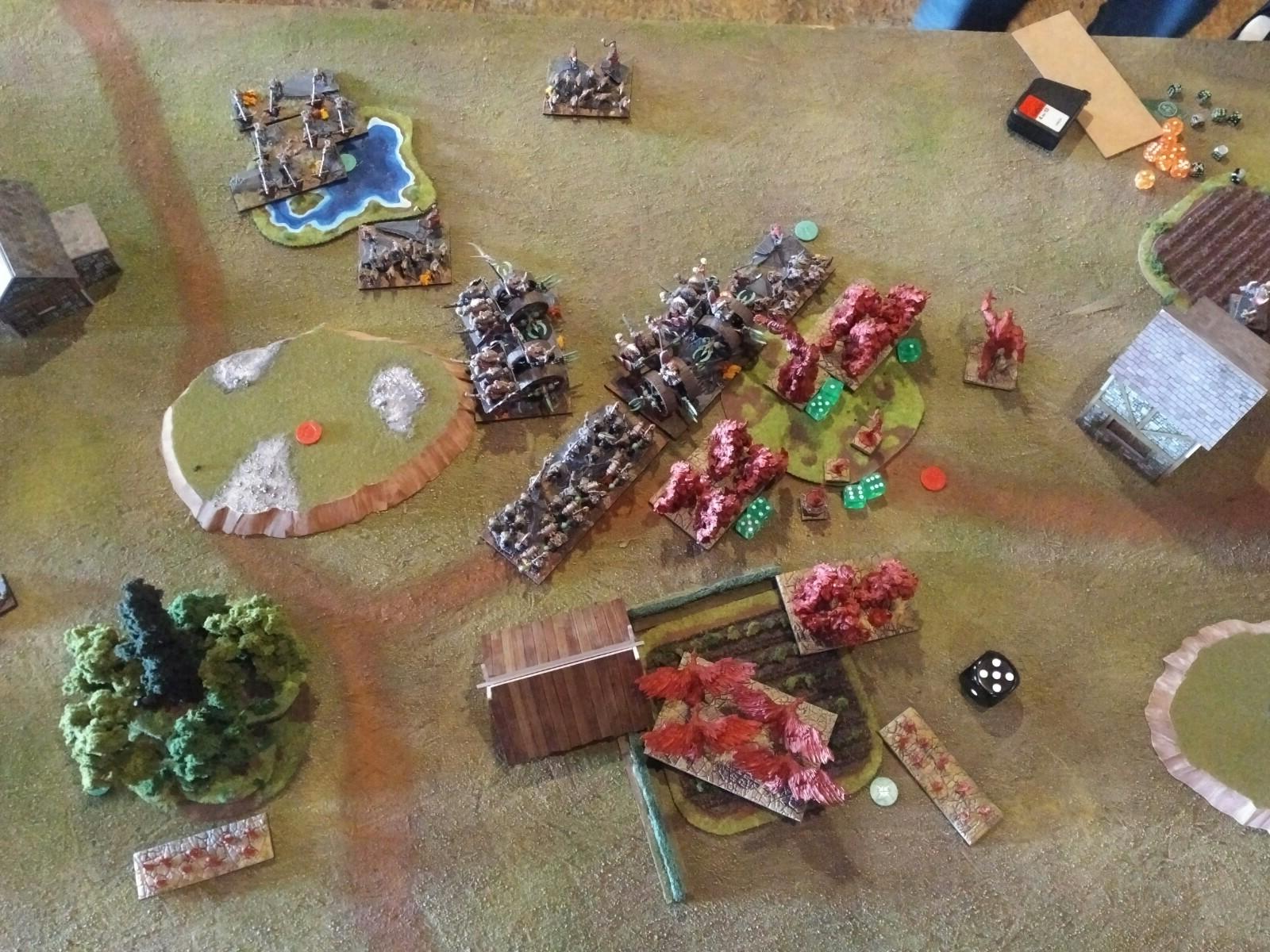 Ratkin 5: Tunnel Runners hinder-charge into Agnes (and bounce), Slave regiments start to stream down the field (including booping some Fire Elementals for 1 damage), Blight tear into the central Fire Elementals, left Night Terror finally starts making a play for the left objective 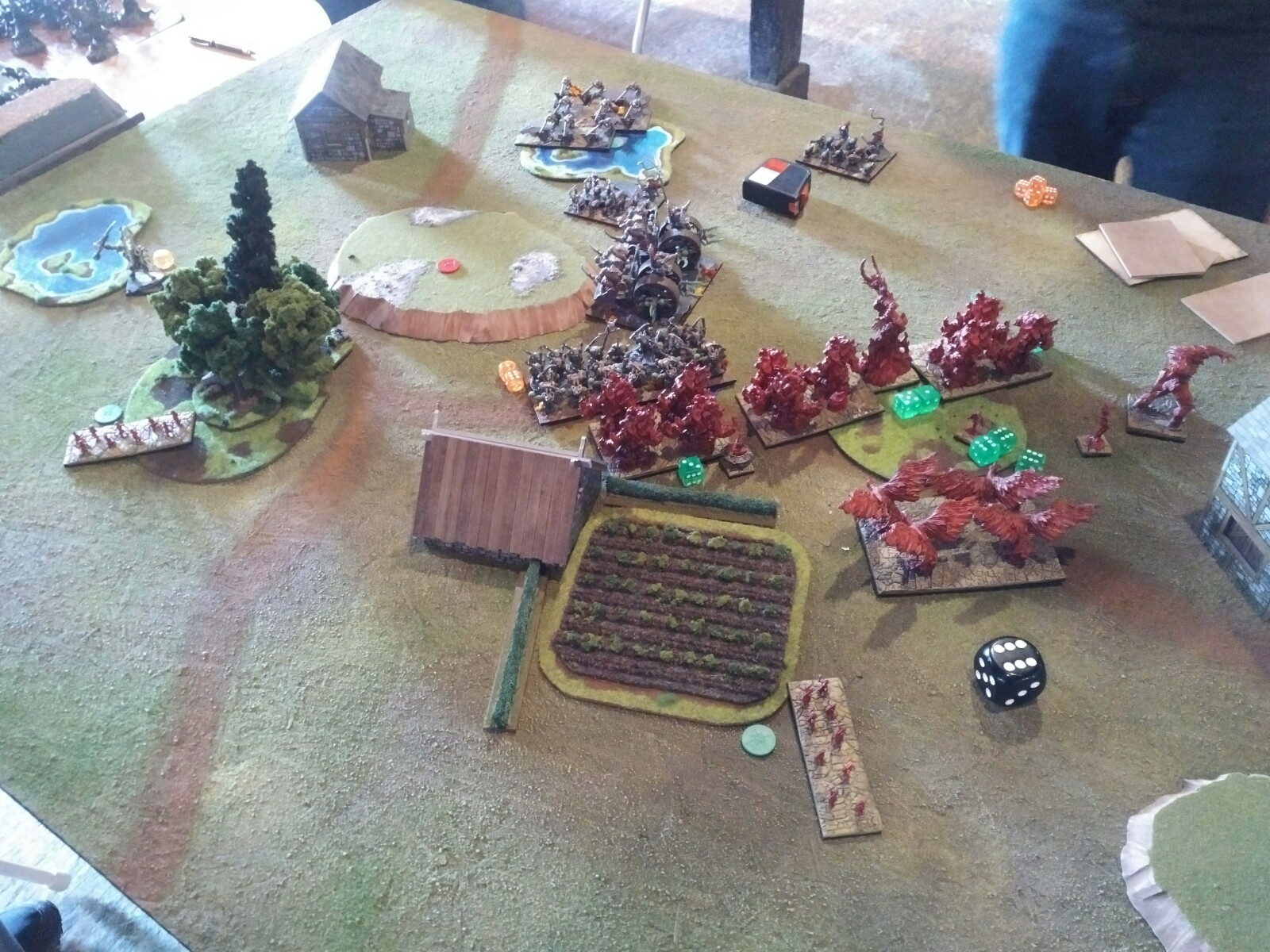 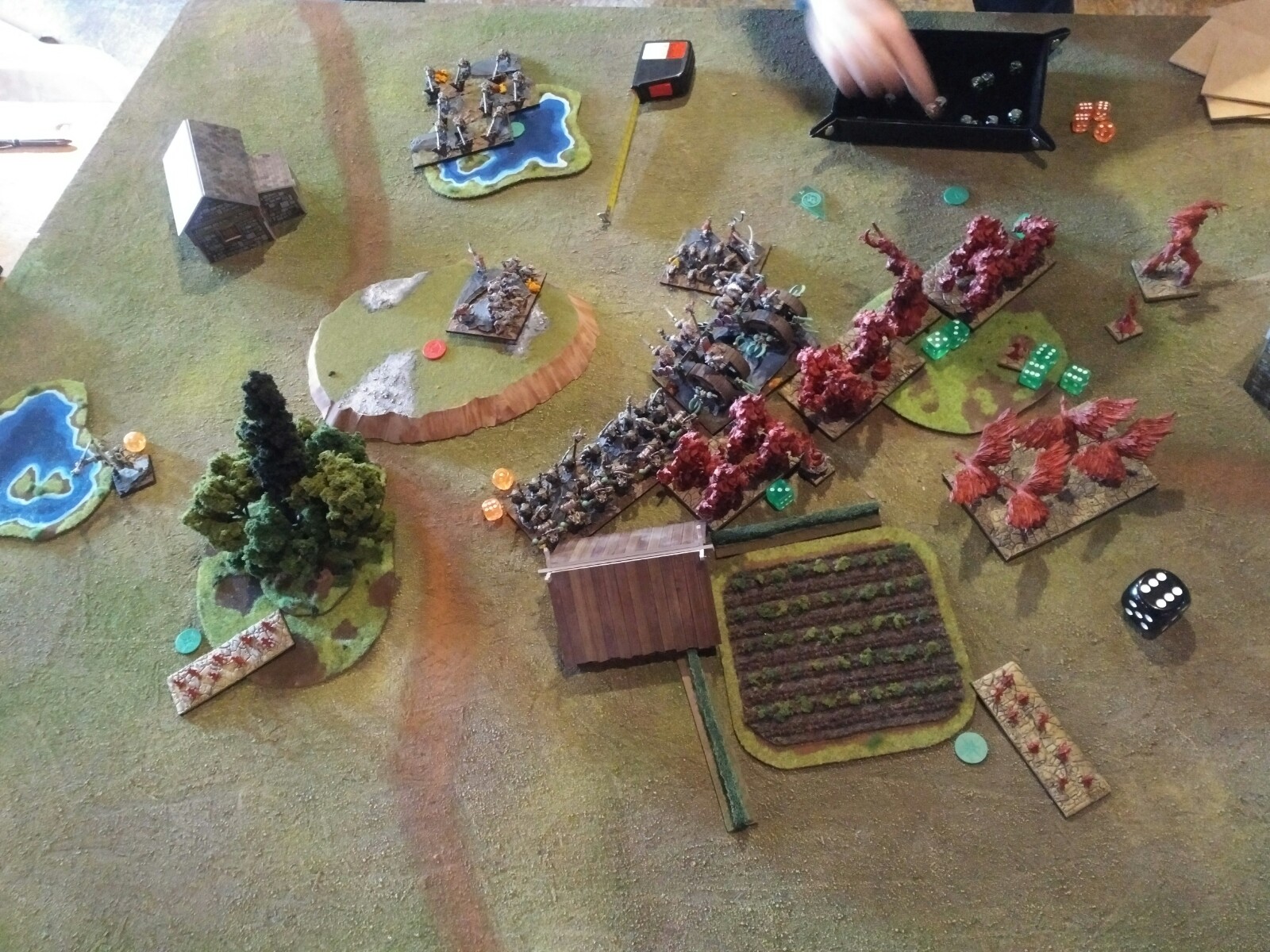 Ratkin 6: It’s in the rats’ paws now, and the only moves that matter are Slaves grabbing 2 VP and the second Tunnel Runners + Blight combo-ing the Nv -/19 Fire Elementals 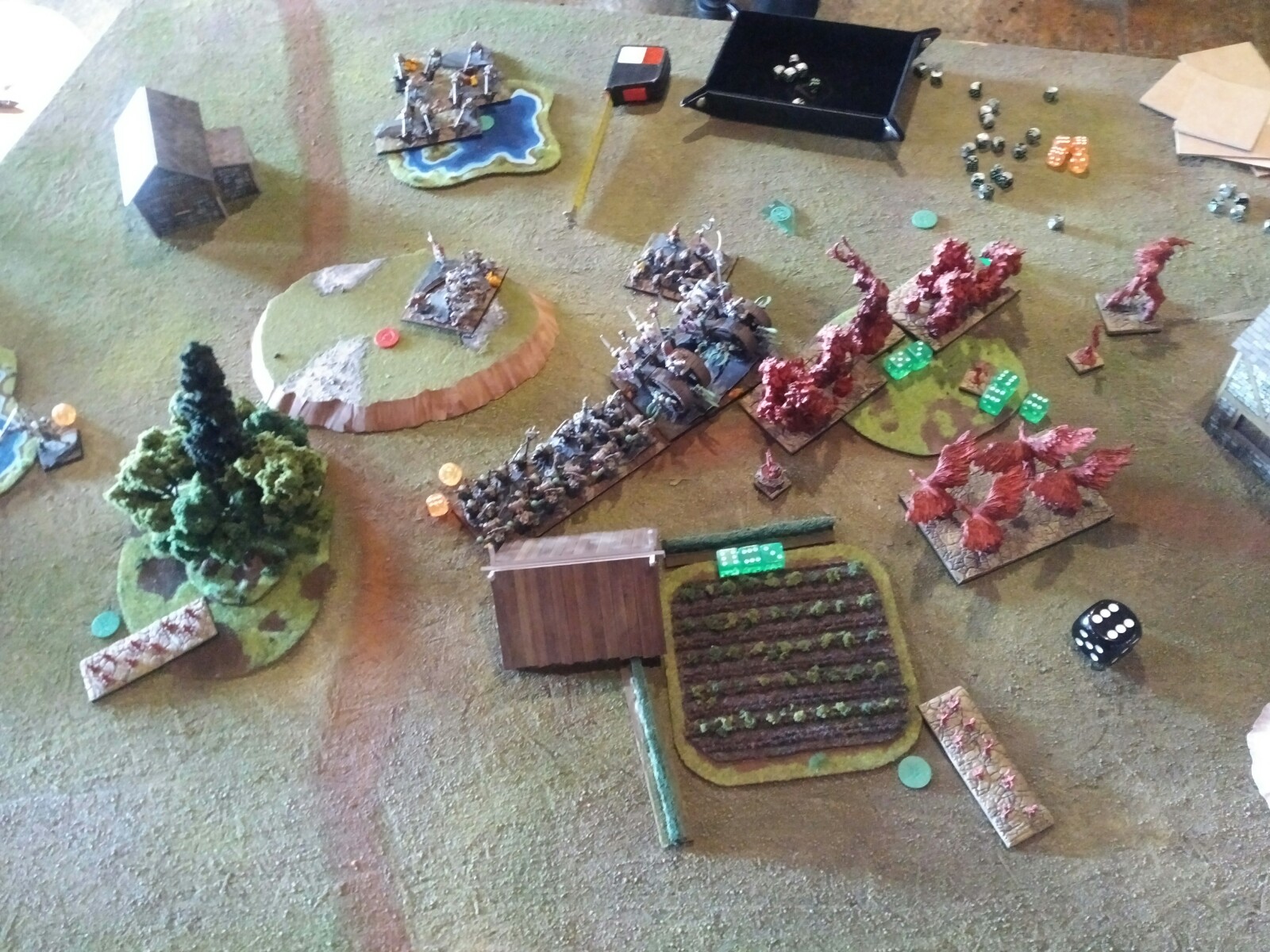 Ratkin 6: The Fire Elementals crumble on 15 damage, snatching victory from a game that felt firmly in the Salamanders’ claws

Awesome grind of a game against a very cool army and great opponent. Look forward to seeing him at upcoming events!