Now that Crossroads is reported, heres a match from last weekend, when the club got some of its long-lost members – some more than others – together to get punched by KOW vets. I mean, makes sense to me. Also I feel pretty good about three dozen games with the army in 20 months. I missed out on a lot of events due to scheduling conflicts, but its a nice round number all the same.

Yep, same list. I have half a thought to drop a 15 point upgrade somewhere and give the CLOFD nimble, as its always an issue for him getting his gore cannon where it needs to be. Probably one of the bane-chants that I rarely use? The martyr Priest often has her hands full healing dudes.

Also holy crap, did you know she has a healing brew?? Pretty sure I forgot all of Crossroads, as well as this game!

Somebody had 15 points worth of items or spells that didnt really come into play. Theres stuff Id tweak, which well get to at the end. This was Johns (of John Holst Has a Posse fame) first game in a while, but hes not a total newb, although hes just begun multi-basing his old Vampire Counts hence the ocean of proxies.

Eliminate was gifted unto us, which is probably one of my favorites, as it involves punching things but also has a central marker, two things Bloodfire is pretty decent at. Undead either went first or were forced to. 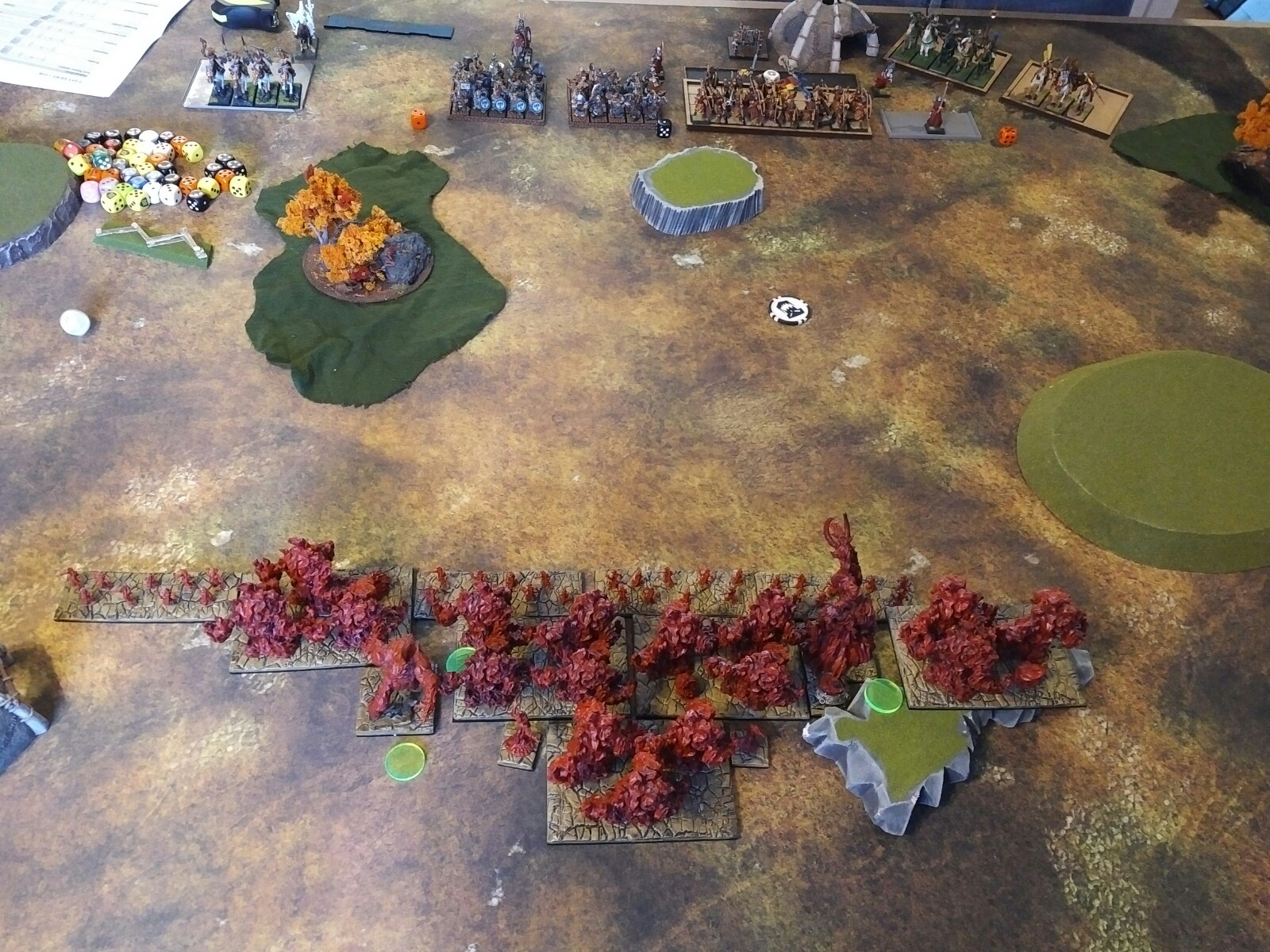 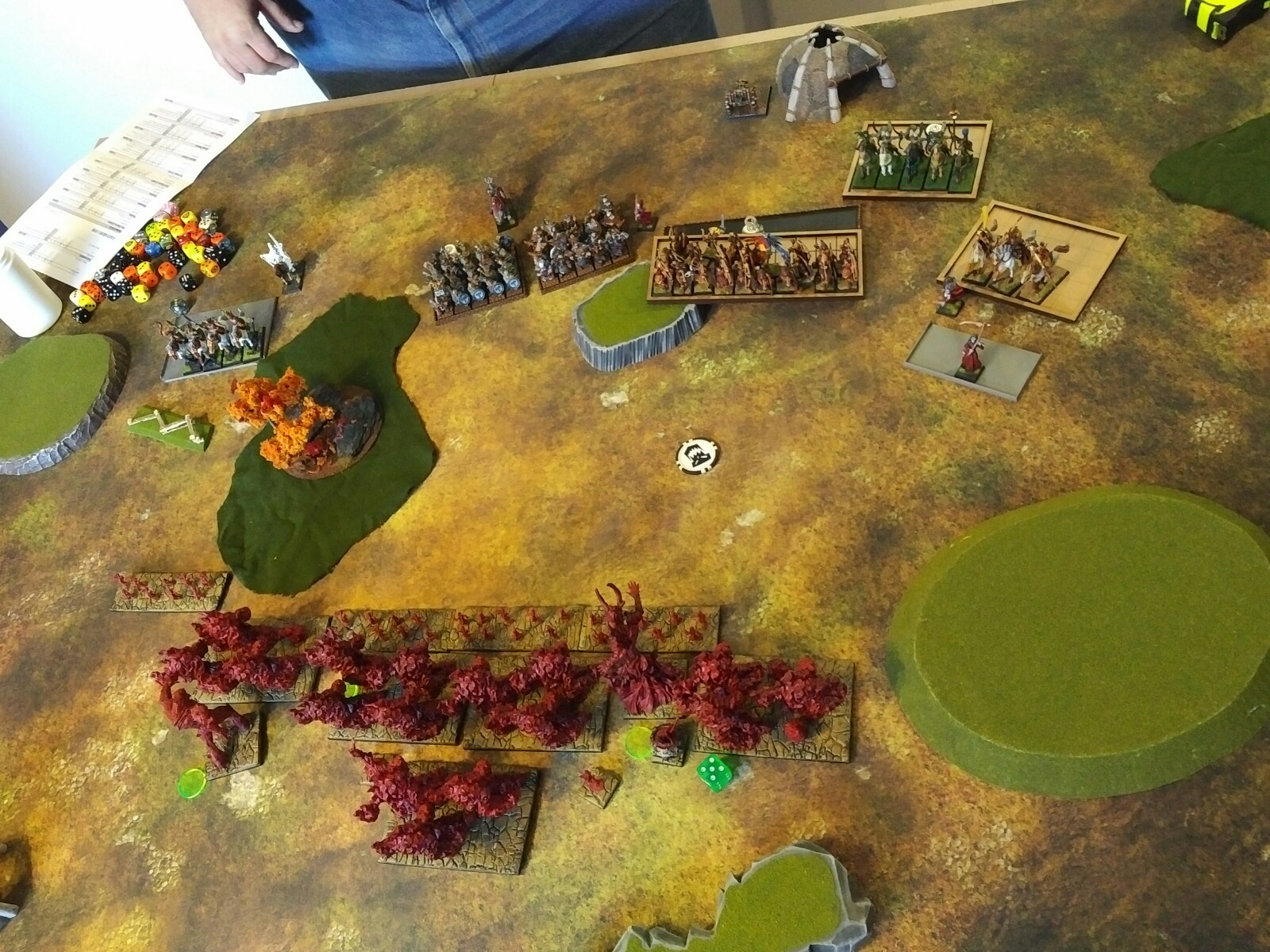 Undead, ho! The Balefire tags a Fire Elemental horde for a solid 5 damage. 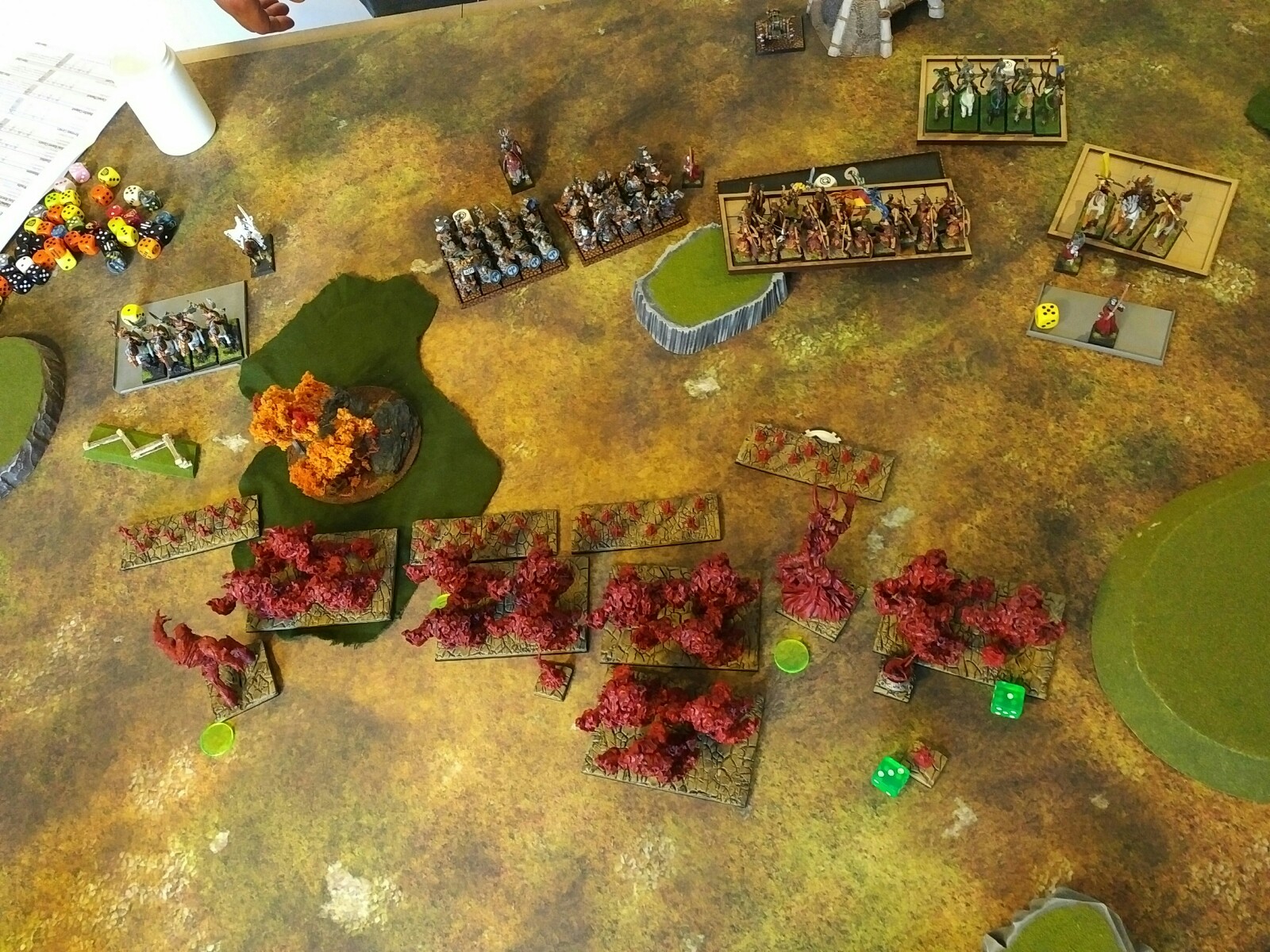 Bloodfire, ho! Ember Sprites breath 1 damage onto left Revenant Cavalry and the Wraiths, then Agnes punches an embarrassing 4 more damage into the Wraiths and cant manage the double 7 to kill. Shake it off big gal, sok. Mage-Priest heals the catapulted Fire horde for 1 and Martyr Priest prays off another 3. 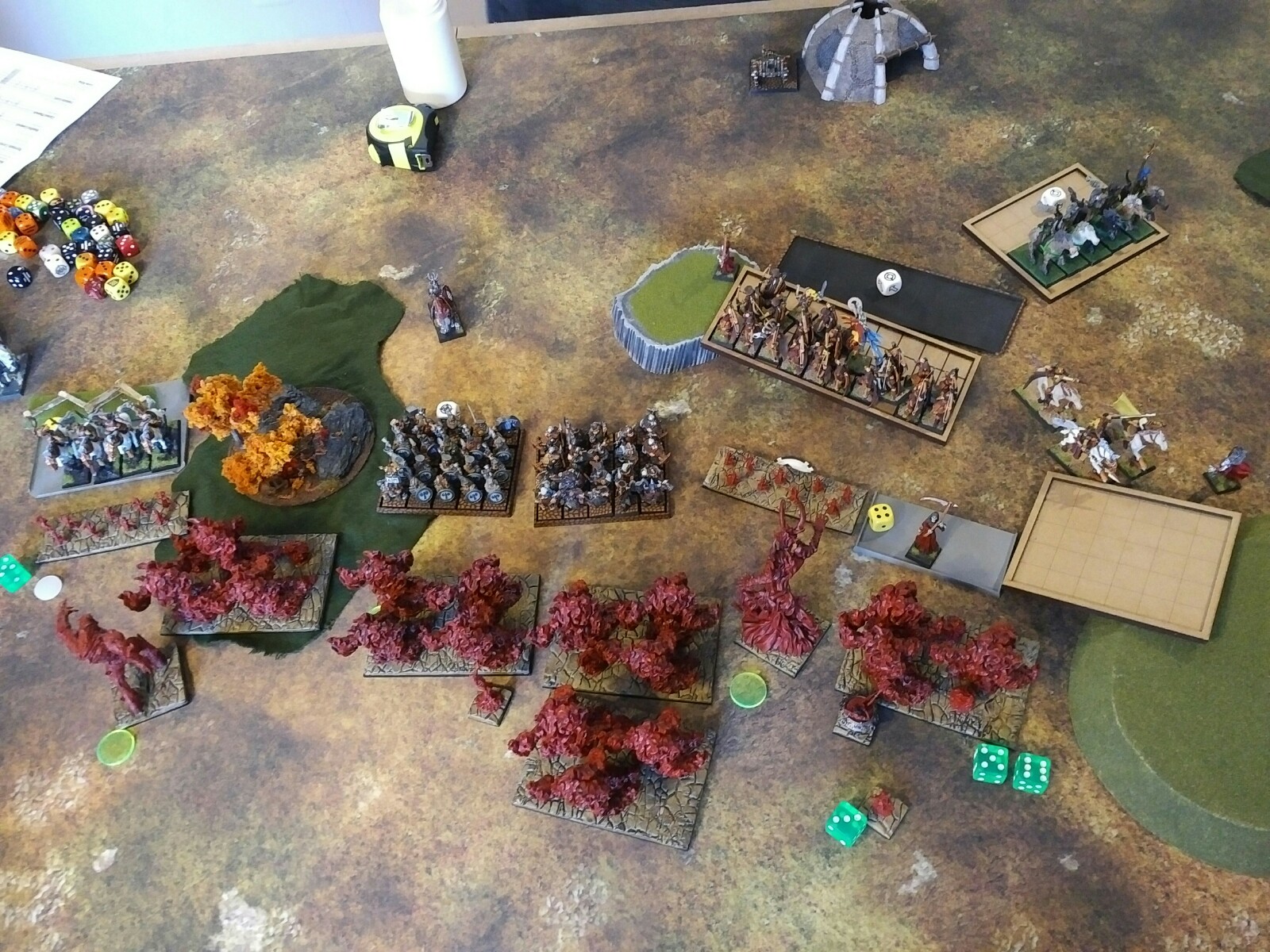 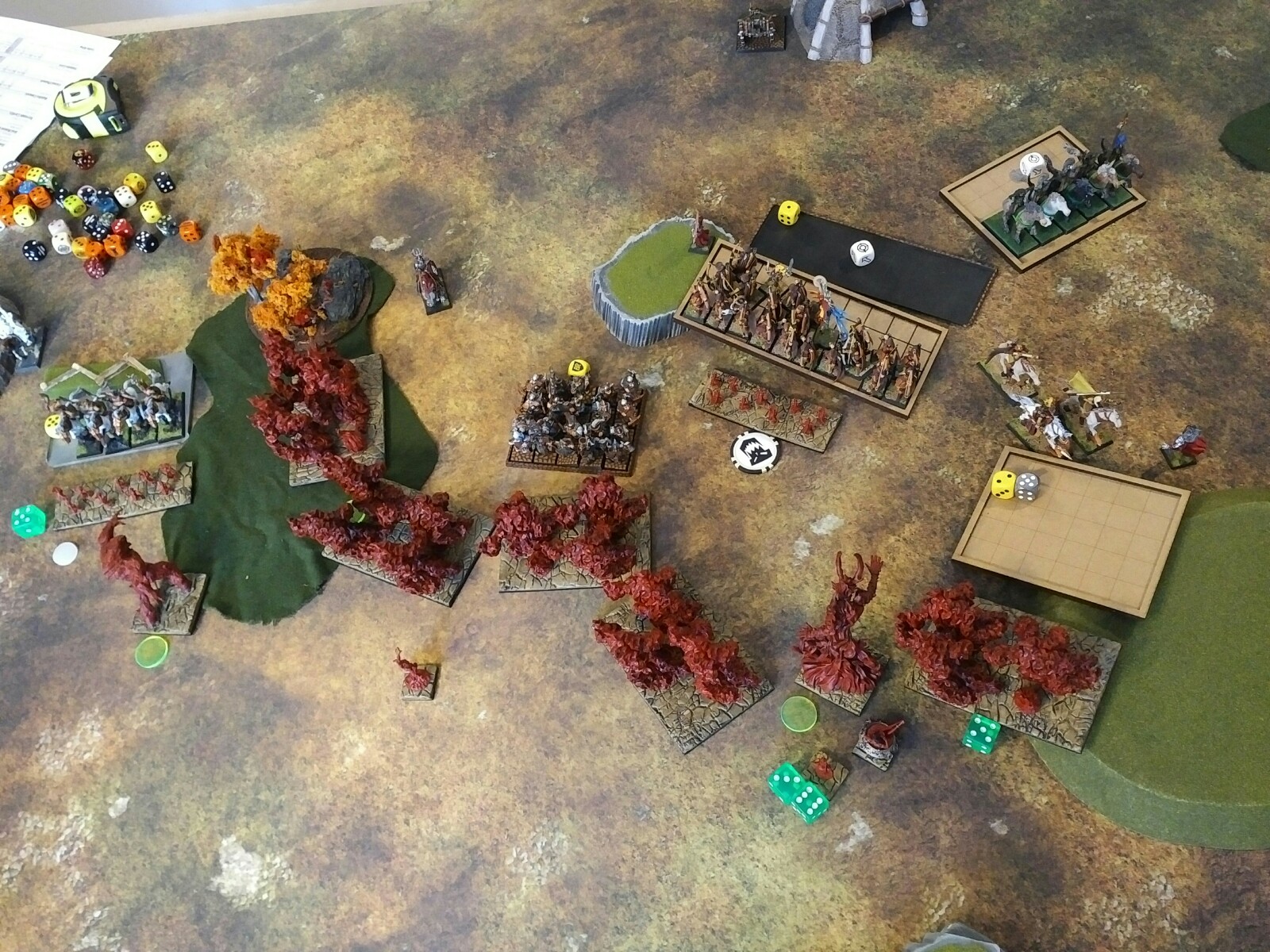 The red tide gets right to working that short game, with some obvious Fire Elemental counter-charges (into Soul Reavers, Mummies and Revenant Cav). The Soul Reavers cop a surged flank charge from a second Fire horde that plowed up through the woods and the rightmost Fire horde has 6 damage prayed off for grinding purposes. Meanwhile the CLOFD chunders 5 damage into the left Rev Cav and Agnes heat rays the Wraiths off the table. In combat, the Soul Reavers are turned to jelly, the Mummies take 6 damage, and the Rev Cav stick around with a healthy 7 damage taken. 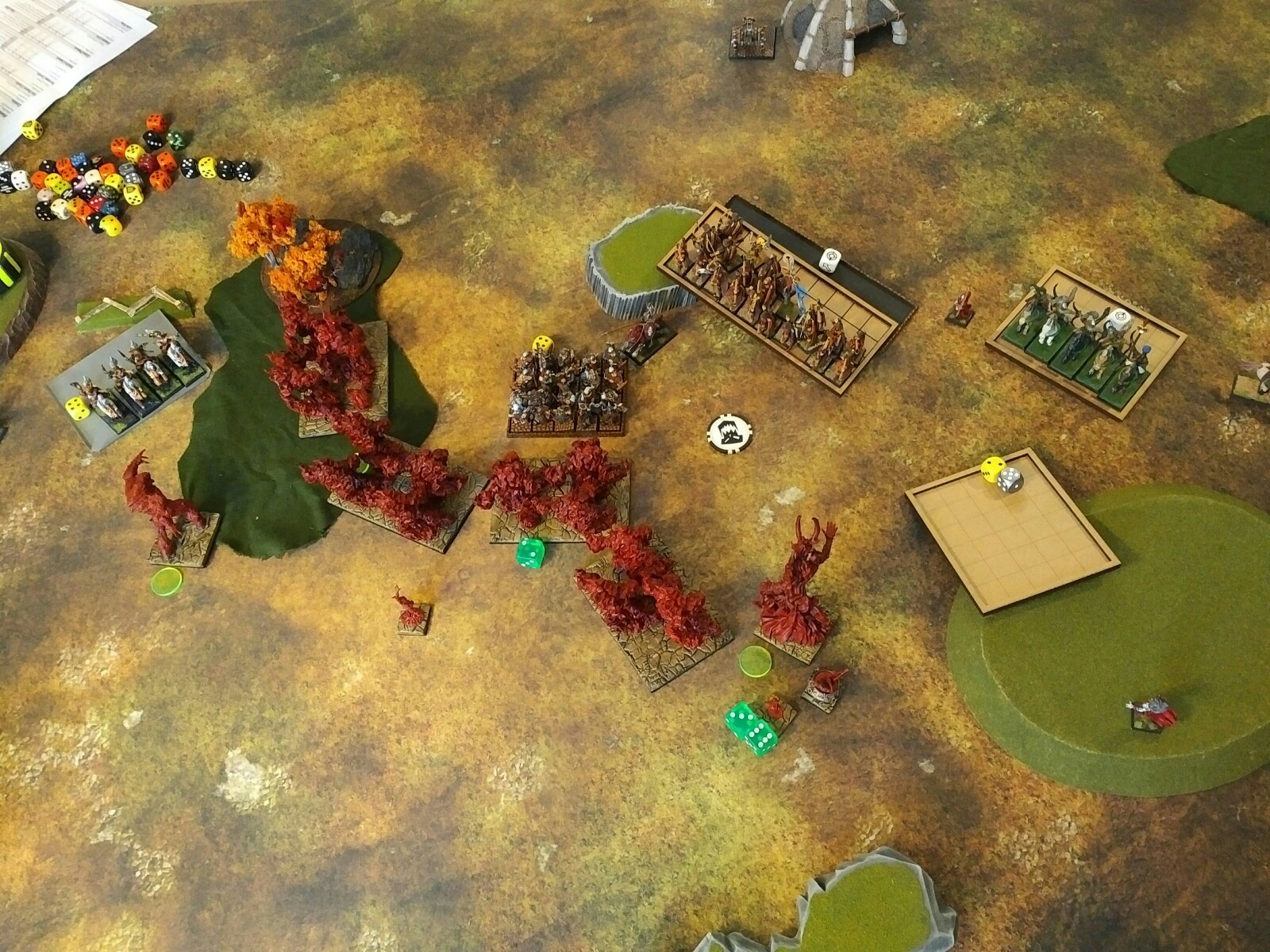 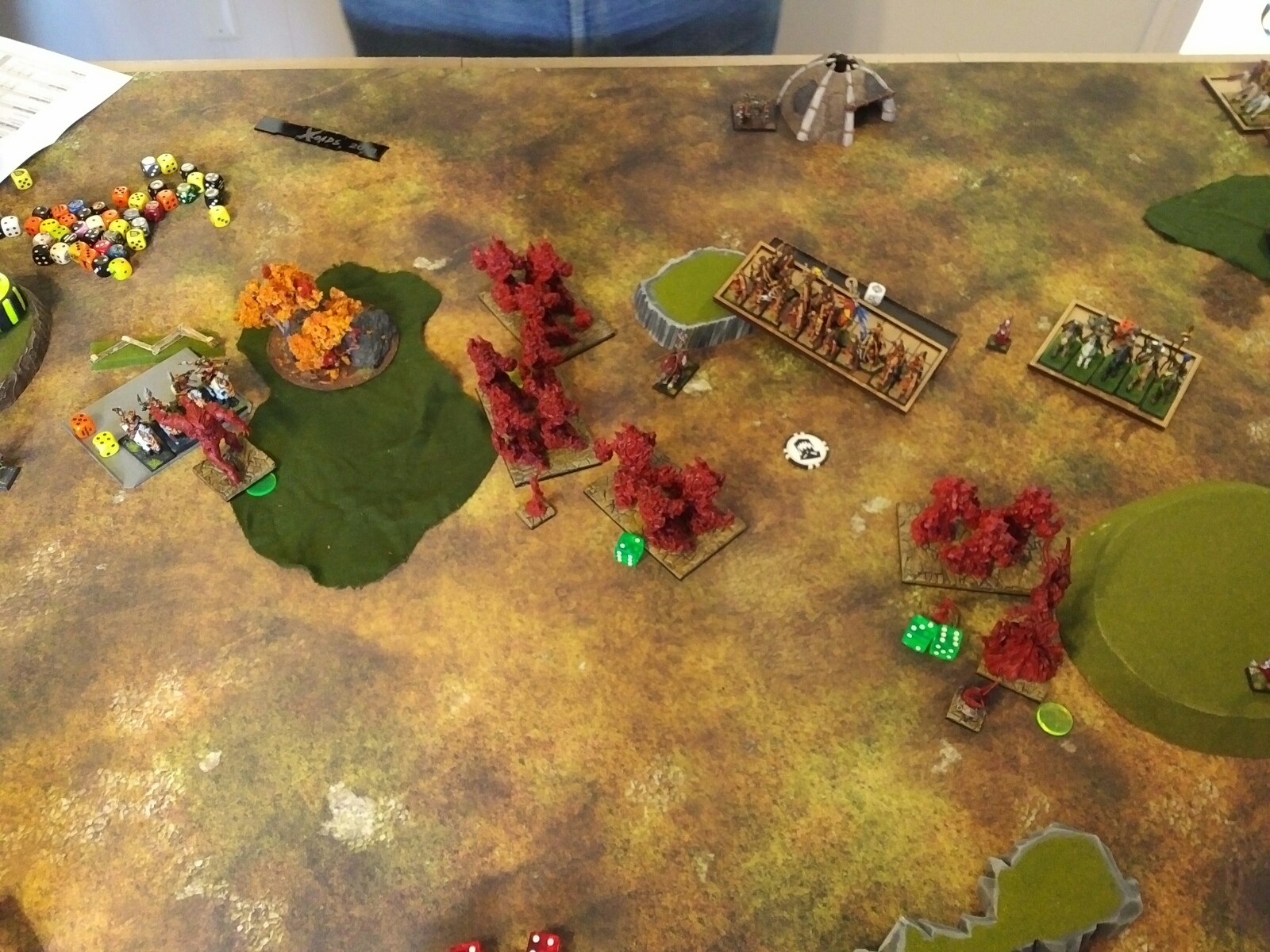 The Bloodfire Herald only regrets that she cant command all 3 central Fire Elementals to punch the Mummies at once 😐 Fire in the front and the flank puts paid to the Mummies, while a bane-chanted Fire horde to the front of the right Rev Cav shatters them as well. The CLOFD charges the left Rev Cav himself, dispensing a solid 5 damage (to no effect), and Agnes body blocks for the Martyr Priest (being hunted by the Pharaoh on the right flank) as she lasers the lurking Soul Reaver Cavalry for 4 damage #hittingishard #saideveryfireelementalever 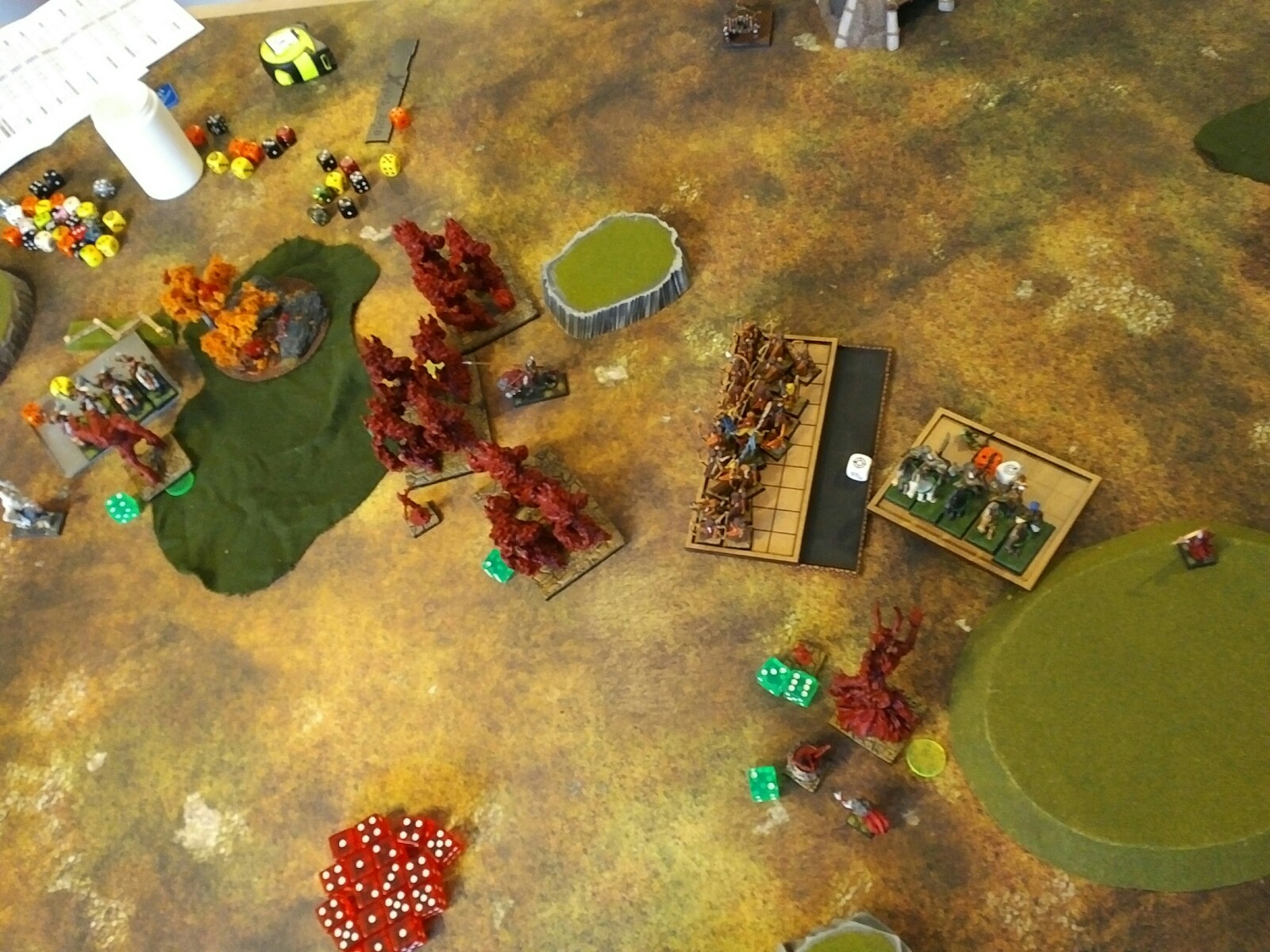 The Zombie legion lends its considerable weight to the Soul Reaver Cav by combo-charging the fresh Fire Elementals on the right, overcoming their considerable -/18 Nv in one go. The CLOFD is counter-charged by his Revenant Cav, who punch 4 damage through with the help of bane-chant. The Pharaoh jumps on the Herald, doing just 2 wounds for not even a waver, and the Vampire blocks / charges the courageous Fire horde, doing 4 damage in the meantime. Im reminded how pimp Vampires stats are, damn. 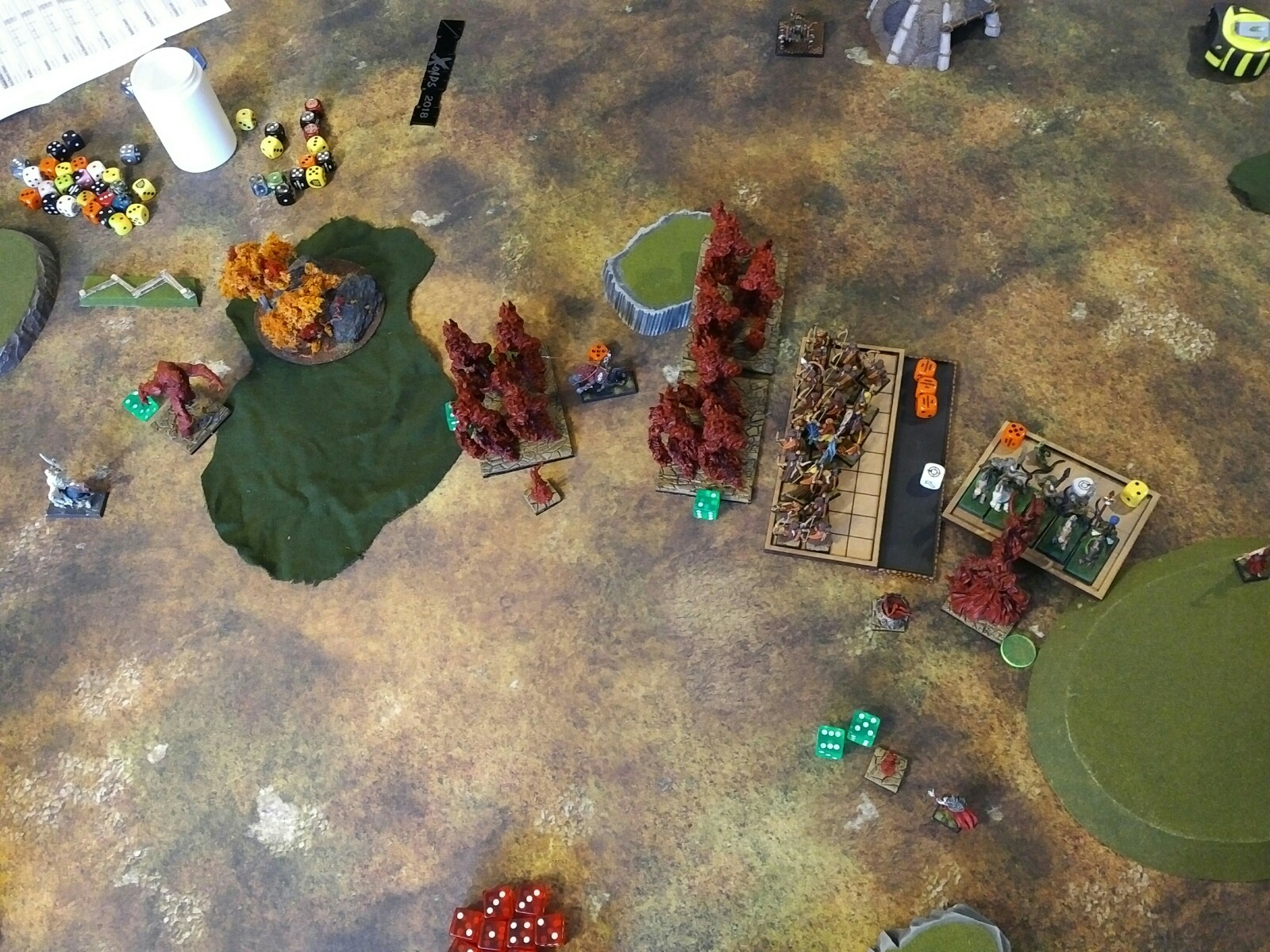 As Bloodfire closes out Turn 4, the game does still hang in the balance, but the deadites are rapidly running out of pieces, and the redementals aim to grind more away as fast as possible. The CLOFD counter-charges and smashes the Revenant Cav himself (bravo, big guy), the courageous Fire horde counter-charges the blocking Vamp for 5 damage, two Fire hordes hit the Zombie legion (thanks to surge for the upper one, hence the weird alignment) for 18 solid damage, and Agnes wades into the Soul Reaver Cav for 5 damage – and a disorder. As her last will and testament, the Martyr Priest cleans the damage off the Herald and makes herself very available for the Pharaoh. 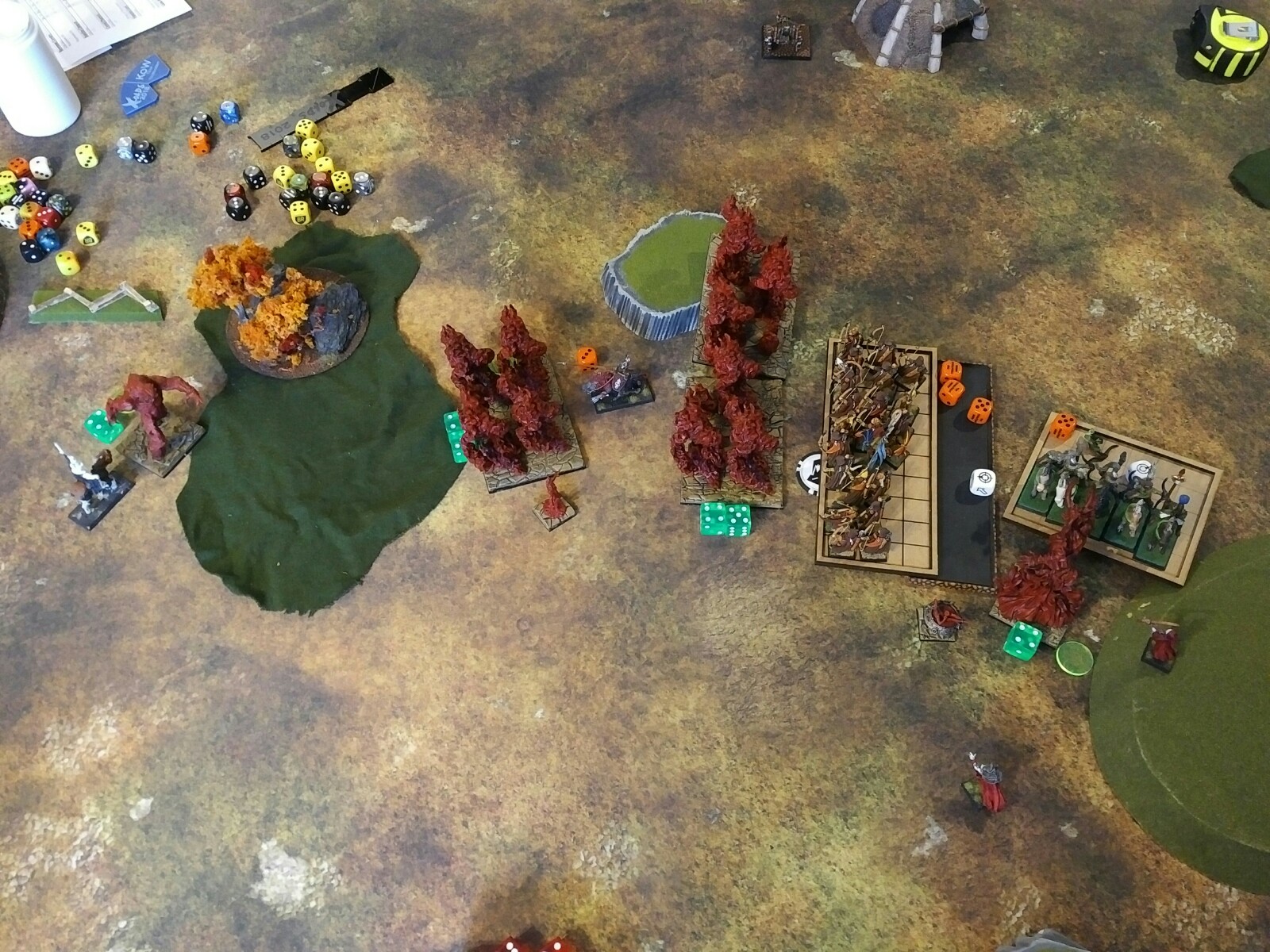 Undead take what they can where they can. The Necro – let’s be real, his pony is the real combat power – tries to get a lucky bop on the CLOFD but cant cut it, the Vampire counter-charges his Fire horde for some more damage, the Zombies rip 7 damage into a Fire horde (HOMF doing work!), and the Soul Reaver Cav do 4 damage to Agnes, bane-chanted but suffering from terrible dice. The Pharaoh does charge the Martyr Priest and pops her like the bloodfire blister she is. 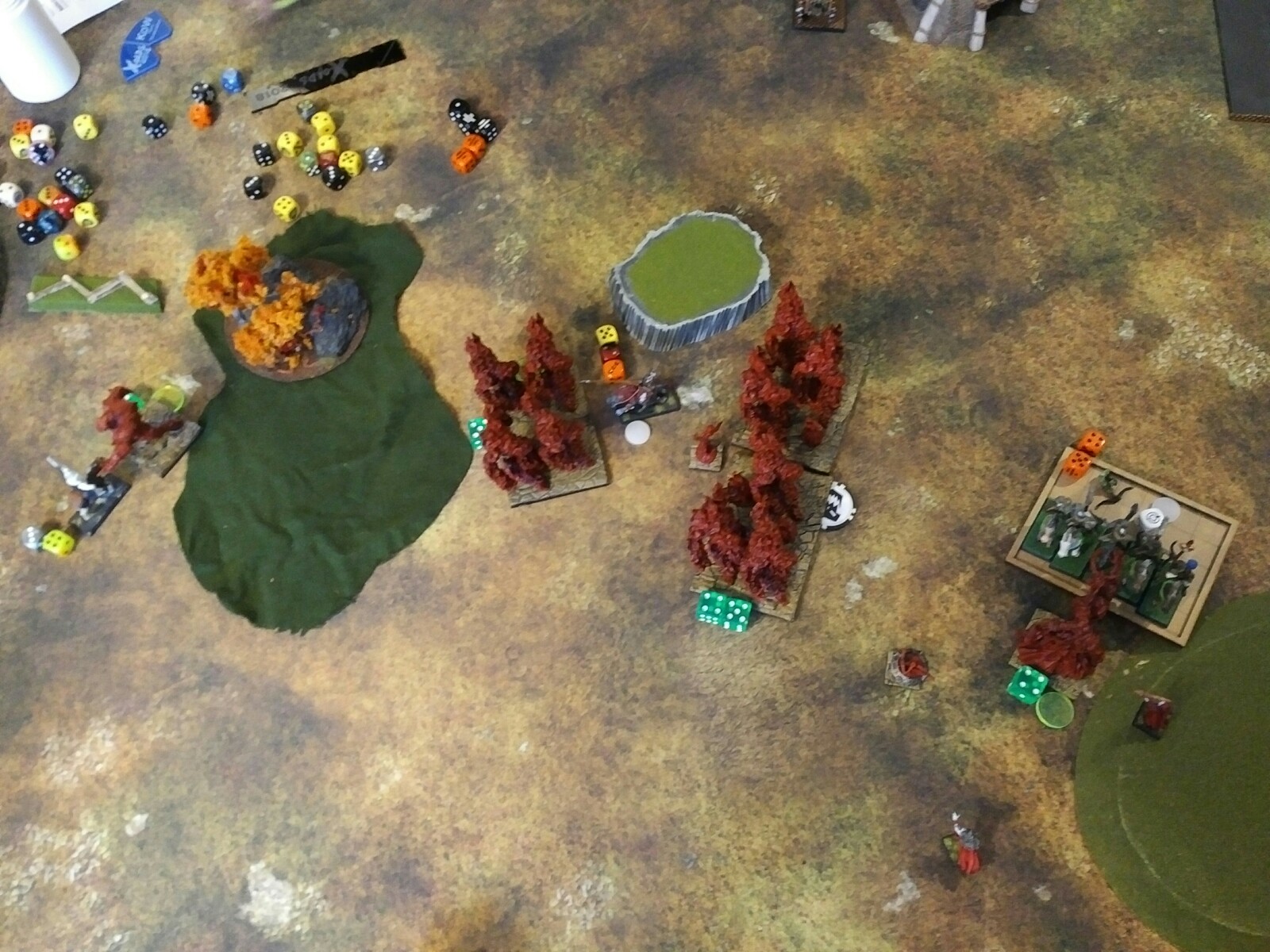 Violence continues! The CLOFD rounds on the Necro but despite a great 7 damage (from 8 attaks) cant land the rout. The courageous Fire Elementals hammer 7 damage into the Vampire and waver him, and Agnes likewise slams the Soul Reaver Cav and wavers them. Finally the combined might of the central Fire Elementals cremates the Zombie legion. 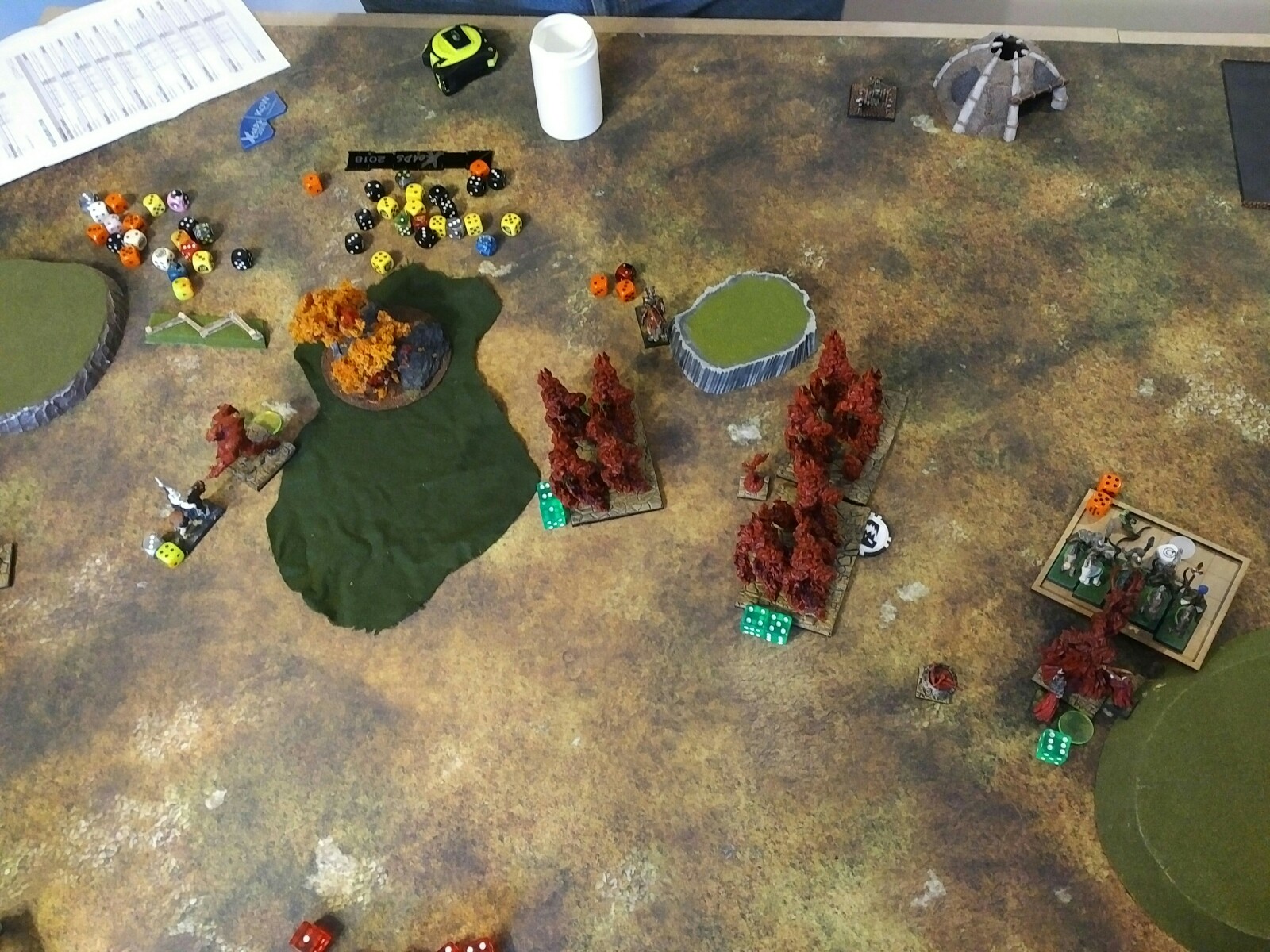 Undead Turn 6 is all out desperation from the deadites. The Necro(s pony) takes another swing at the CLOFD but no luck, the Pharaoh and Liche King rush Agnes for 2 more damage (6 total on -/20), and the Vampire individuals his way out of any Fire Elementals LOS. 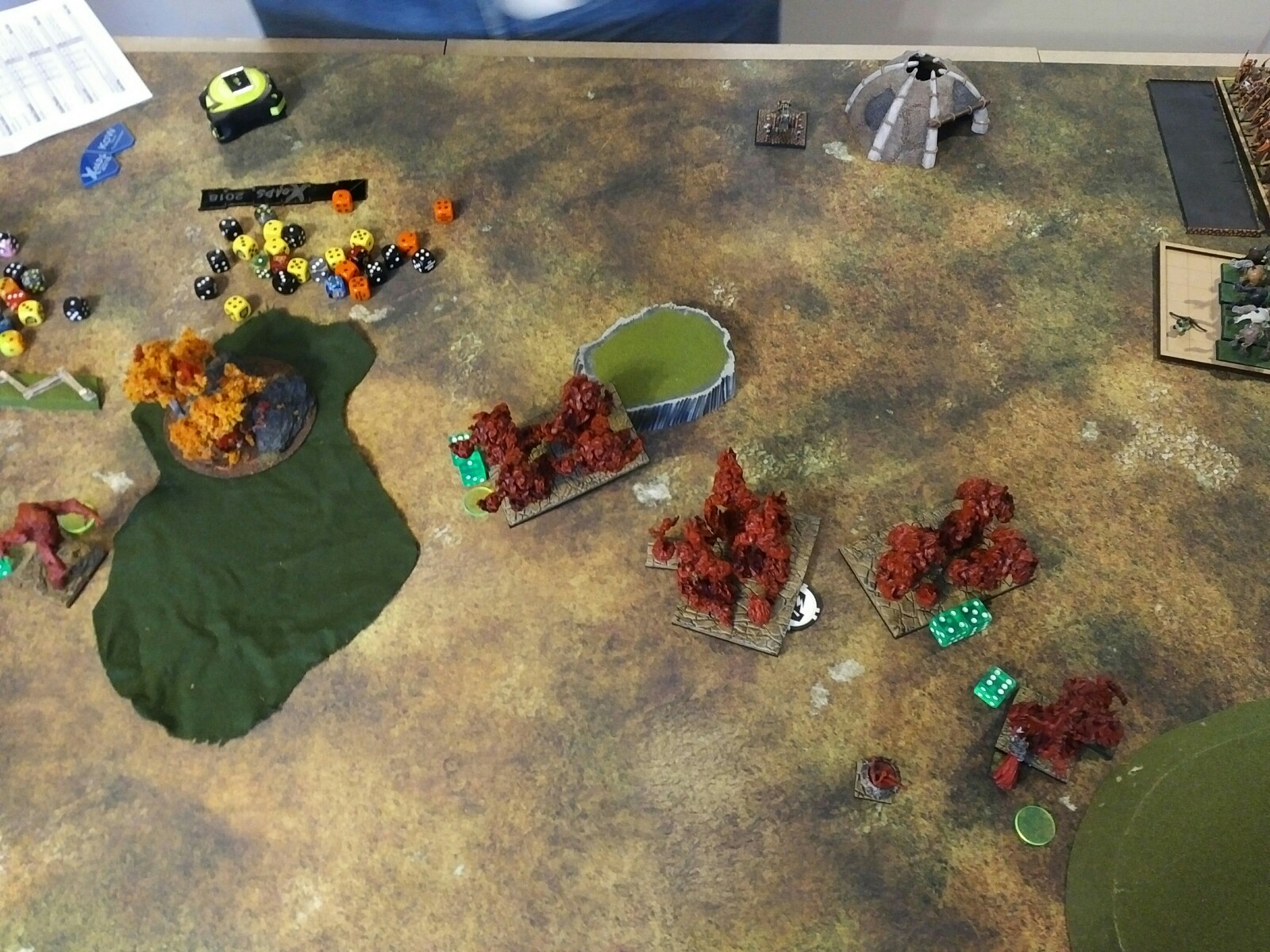 Bloodfire goes full on vampirehunter in Turn 6, surge-charging the Vampire and flank-charging the Soul Reavers with Fire Elementals and front-charging with an Agnes. Bloodsuckers get redeaded. The Necromancer gets turned into old man paste too. 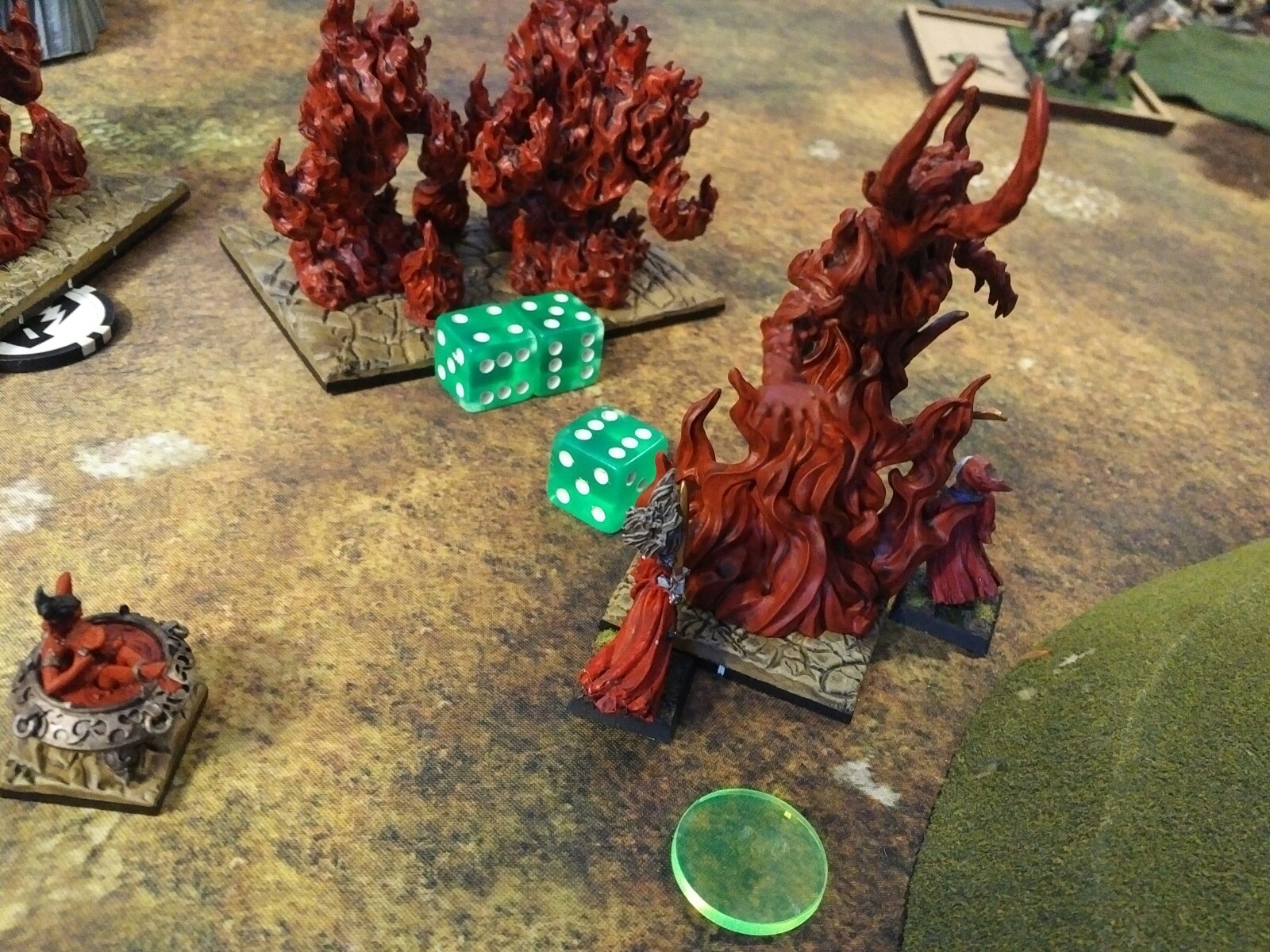 Of course theres a Turn 7! The Pharaoh and Liche King go back into Agnes but score no wounds. I dont think we rolled for Agnes CS4 return attaks

Wooooooo! Fun to roll dice and push the Bloodfire around, as well as face Undead outside of a tournament. Its an interesting faction that wants similar things to me, except is generally faster and doesnt have the same chaff or shooting game I have. I tend to get owned by Vampires on Pegasus and Werewolves, as theyre fast and can easily get to my flanks or even behind my lines. This list I guess relies on the cav for that sort of pressure? But with shambling Rev Cav cant do it and the Soul Reaver Cav is such a pure hammer that Im not sure you can be as cavalier as smaller, more maneuverable units.

Anyway, I did some thinking about where I would take the list, maybe some light tweaks like this:

With 20 points left over for whatever tastiness COK19 brings, or most likely +1Nv on the Mummies or Lykanis and then 5 points of whatever functional thing COK19 brings for the Vamp or the pup. There are some nice 20 pointers as well but I really like the simple nerve bump, especially for regenerating things.