Team Cuddle Time finally slumps its way to the final round, beaten and bruised but still kicking. Team MERC greets us with open arms and one last fist to the gut. I end up paired vs a Nature player who I’ve played three times now at each GT Bloodfire has gone to. In that time hes learned a lot about target prioritization, scenario play, and so on, and his list is much more tuned now than it was a mostly Wood Elves legacy force.

And lets admit it, I just wanted to put Fire up against Water ;D

Yep, spammy min/max Nature, but I cant fault him. I can fault Mantic for not nerfing Beasts yet (COK19 plz!), theres something wrong about a unit that can literally do anything it wants and is always fielded in pairs or trios. I have fought a lot of Beasts, and I guess my suggestion would be -1 De if you select lightning (ala the shooty Death Engine) or flatout only being able to select two upgrades. Flying laser turret? Awesome, you dont get to flank the living hell out of things too. Rampaging combat missile? Fantastic, you dont get to also have amazing shooting on demand. Plodding laser turret looking for late game beatdowns? I love it, but youre not gonna see that until flying is really nerfed.

Anyway, fifth round ended up Control, which is rough against those flying US1 shooting things. I think I chose to go first, out of a burning desire to get shot less and get into his zone at some point. 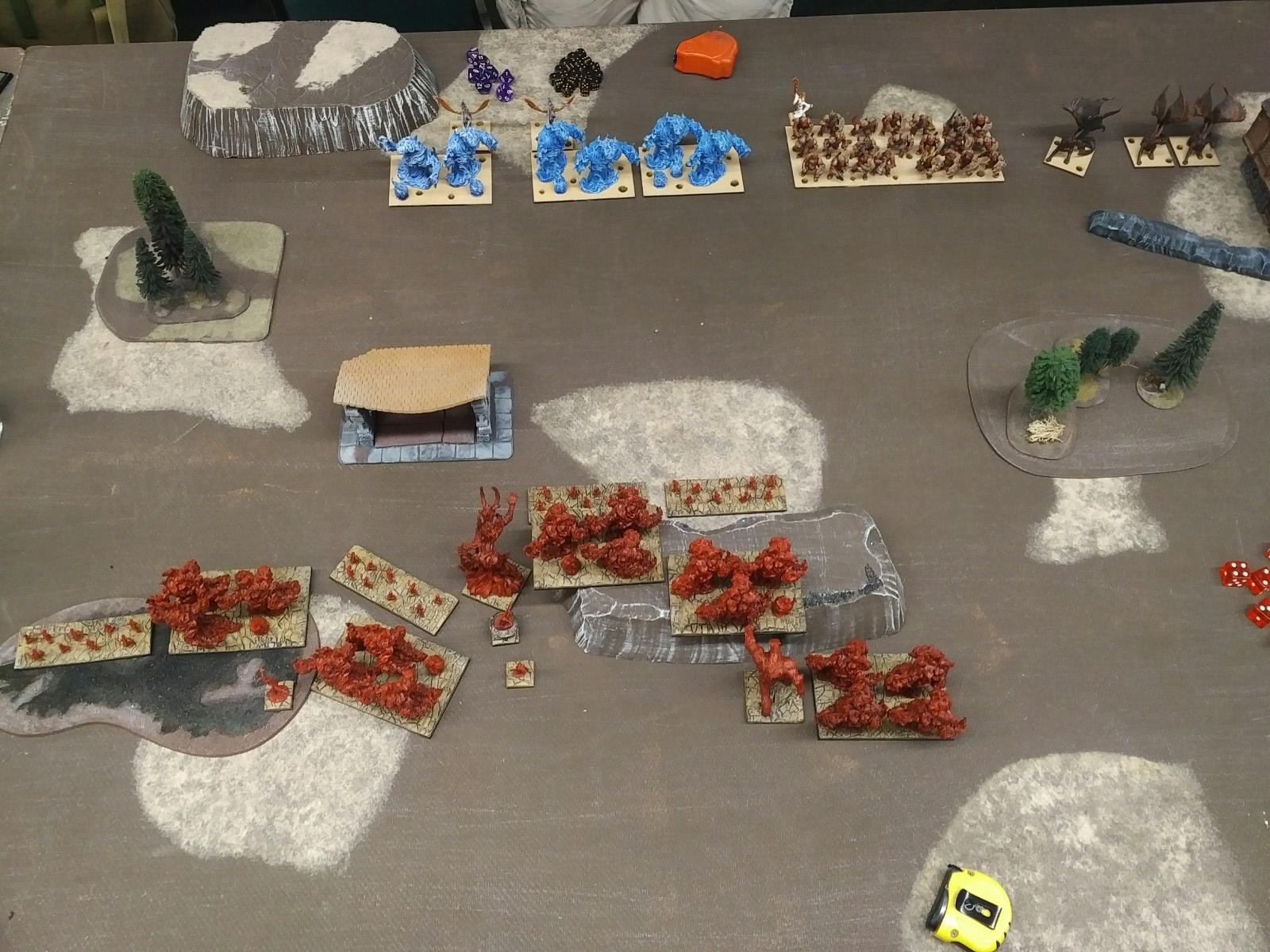 The Bloodfire rolls out over hill and dale! 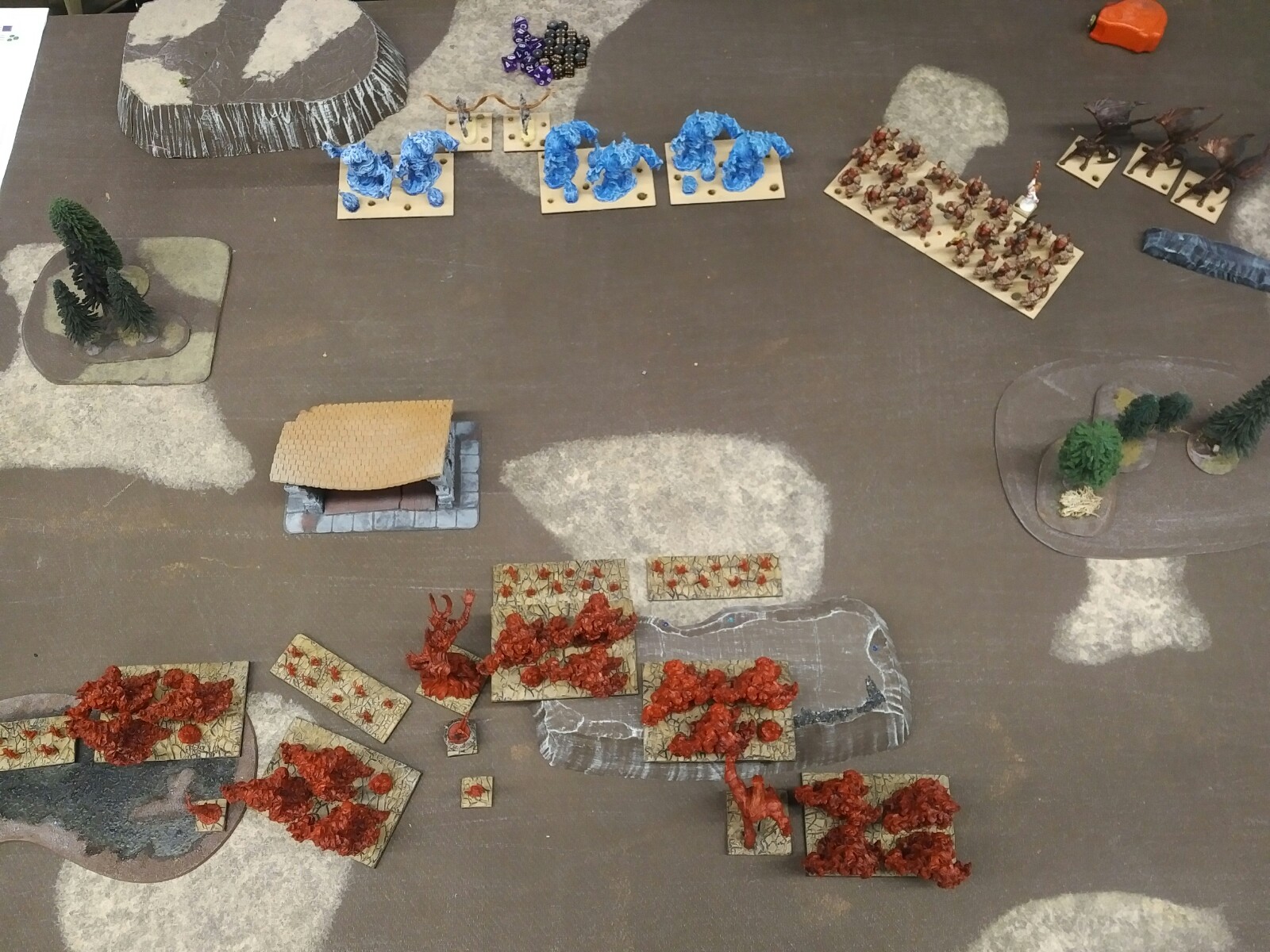 Nature virtually doesnt move, content to gather the lightning and let the fire come. Lasers blast away the rightmost Ember Sprites and singe the central regiment. 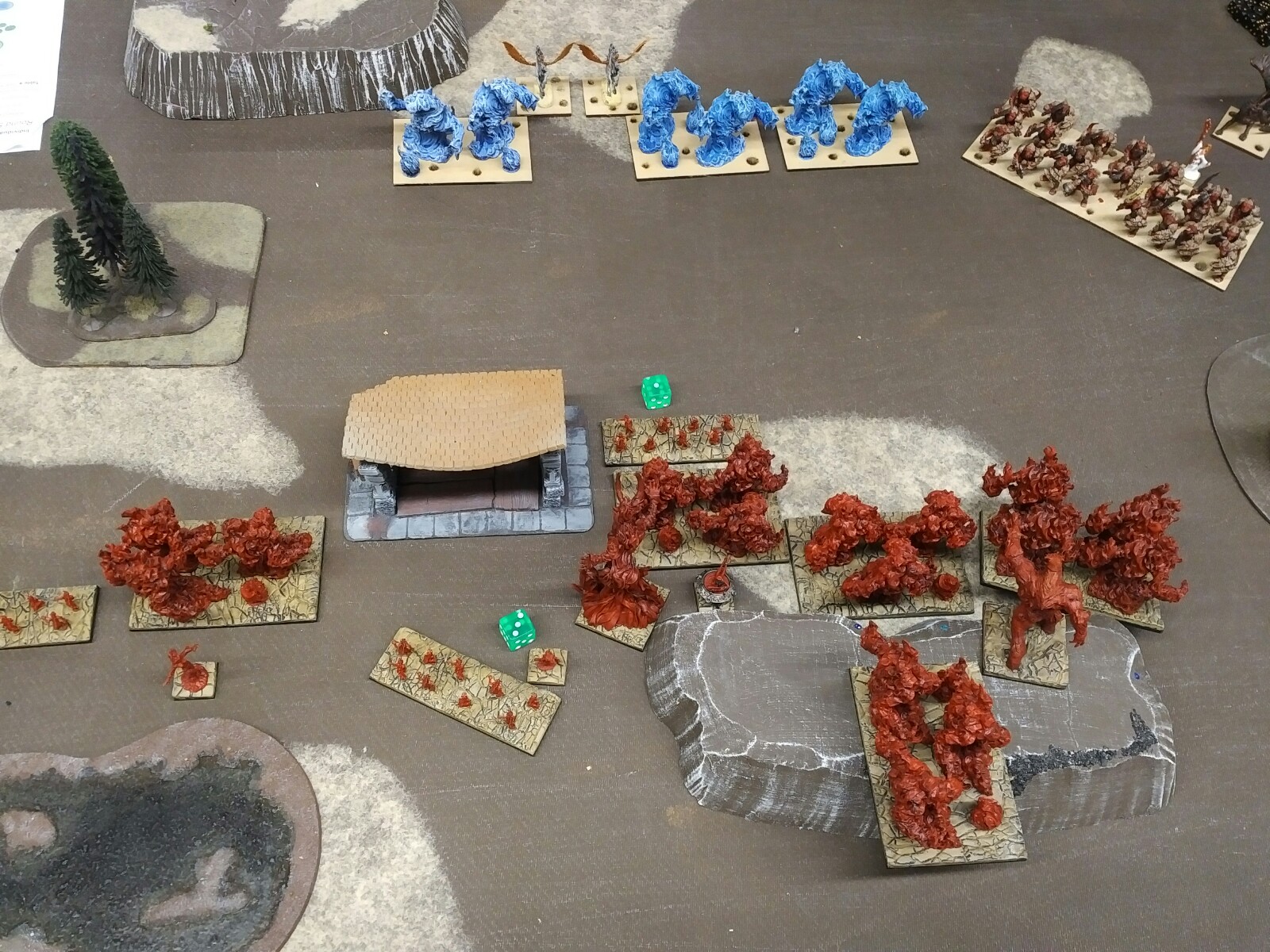 The red tide flows forward, with the charred Sprites enjoying a martyrs prayer and tossing some chip damage on the central Water Elementals. Meanwhile a misdeployed Fire Elemental horde surges across the backfield to be relevant later. 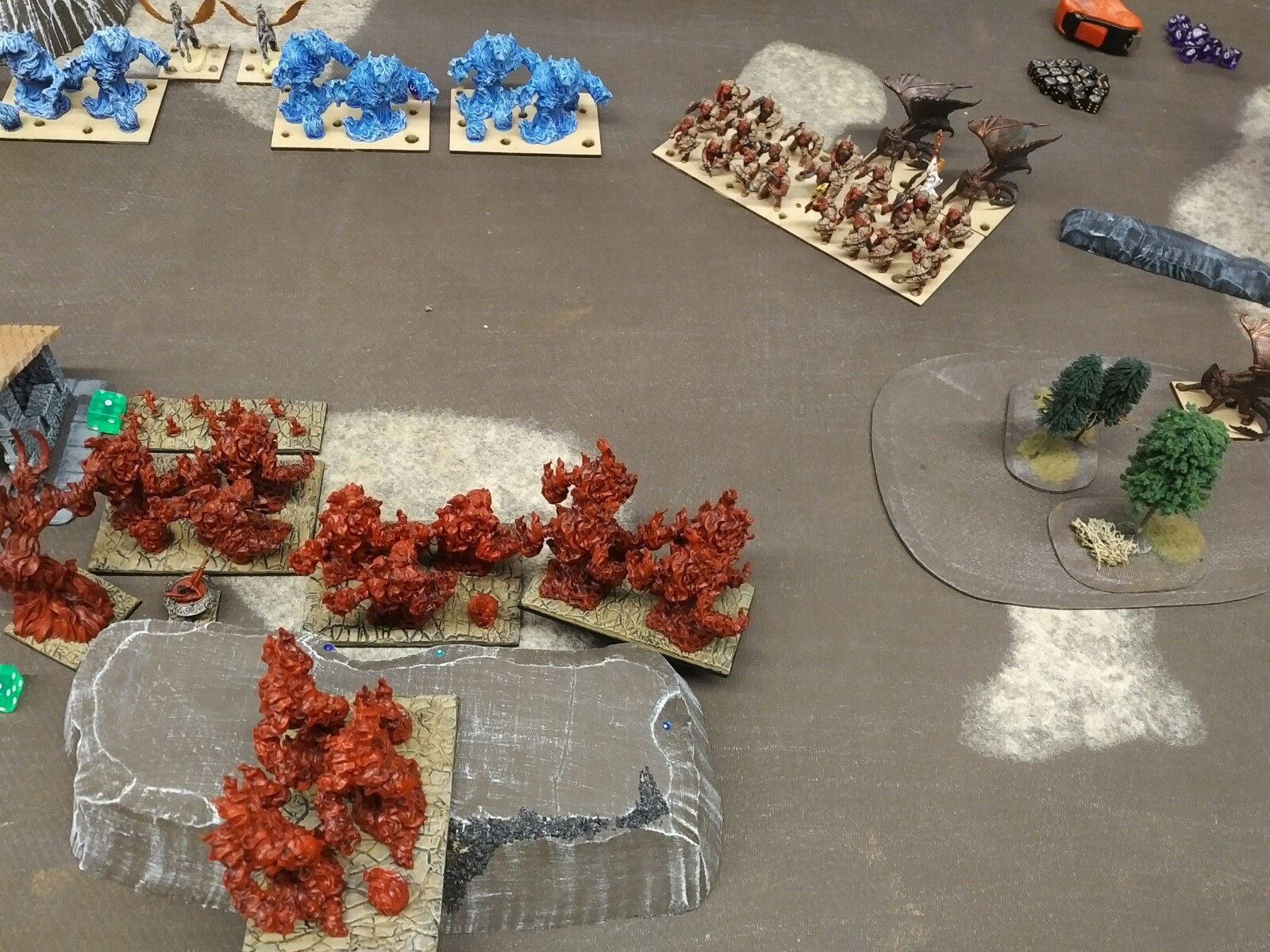 Nature again barely moves at all, with just the Beasts working some angles. The Green Lady knows what the Bloodfire wants, and that her troops outrange them in both combat and shooting. With a contemptuous flick of her wrist, the Lady has her pets direct all their lightning at the towering Fire Drake on the hill. He explodes in a shower of molten gore! 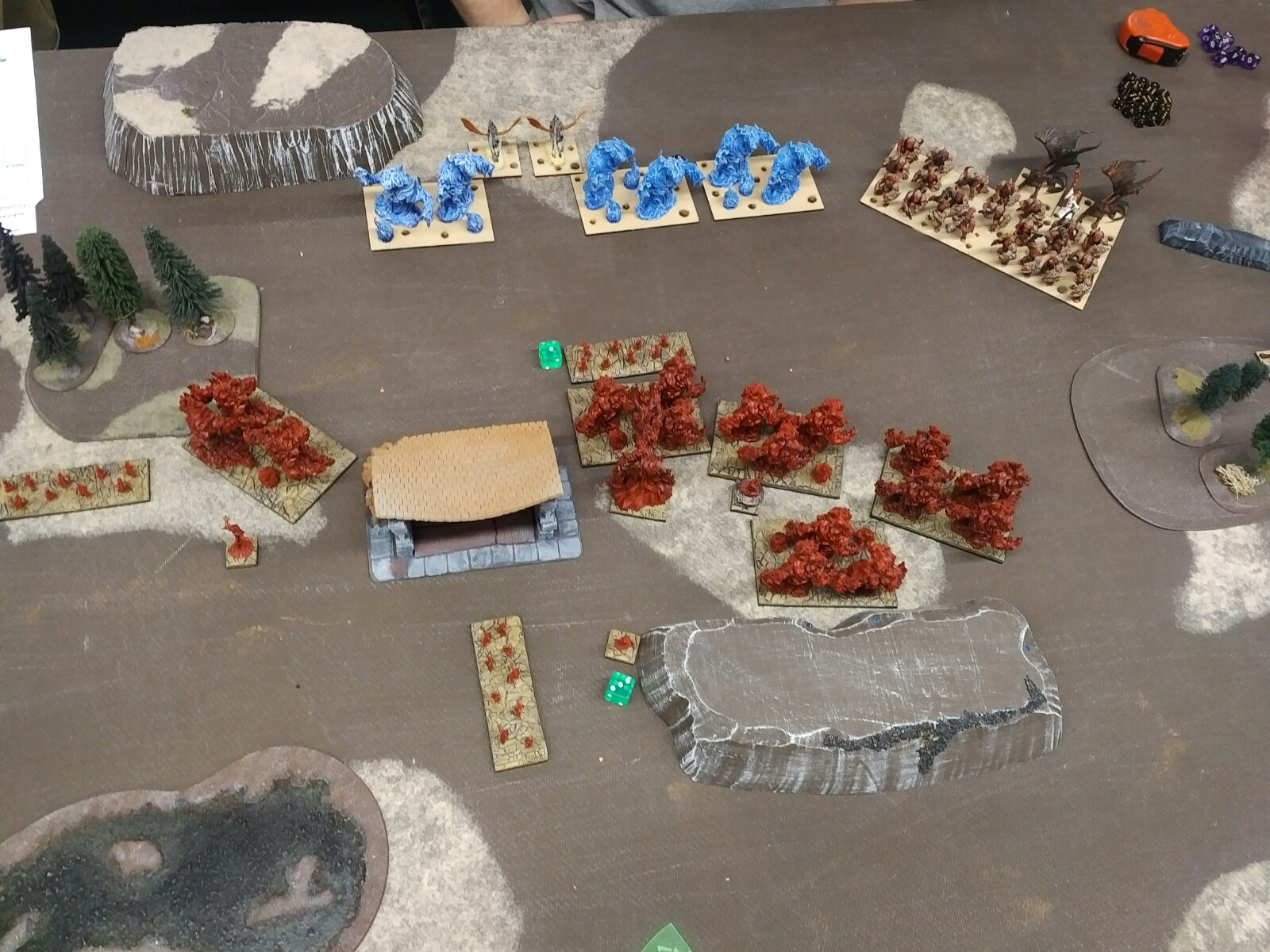 Gritting her teeth, the Herald of the Bloodfire has her charges force the issue, moving into charge range across the line. Ember Sprites vomit on the central Water Elementals or secure the field for the late game score. 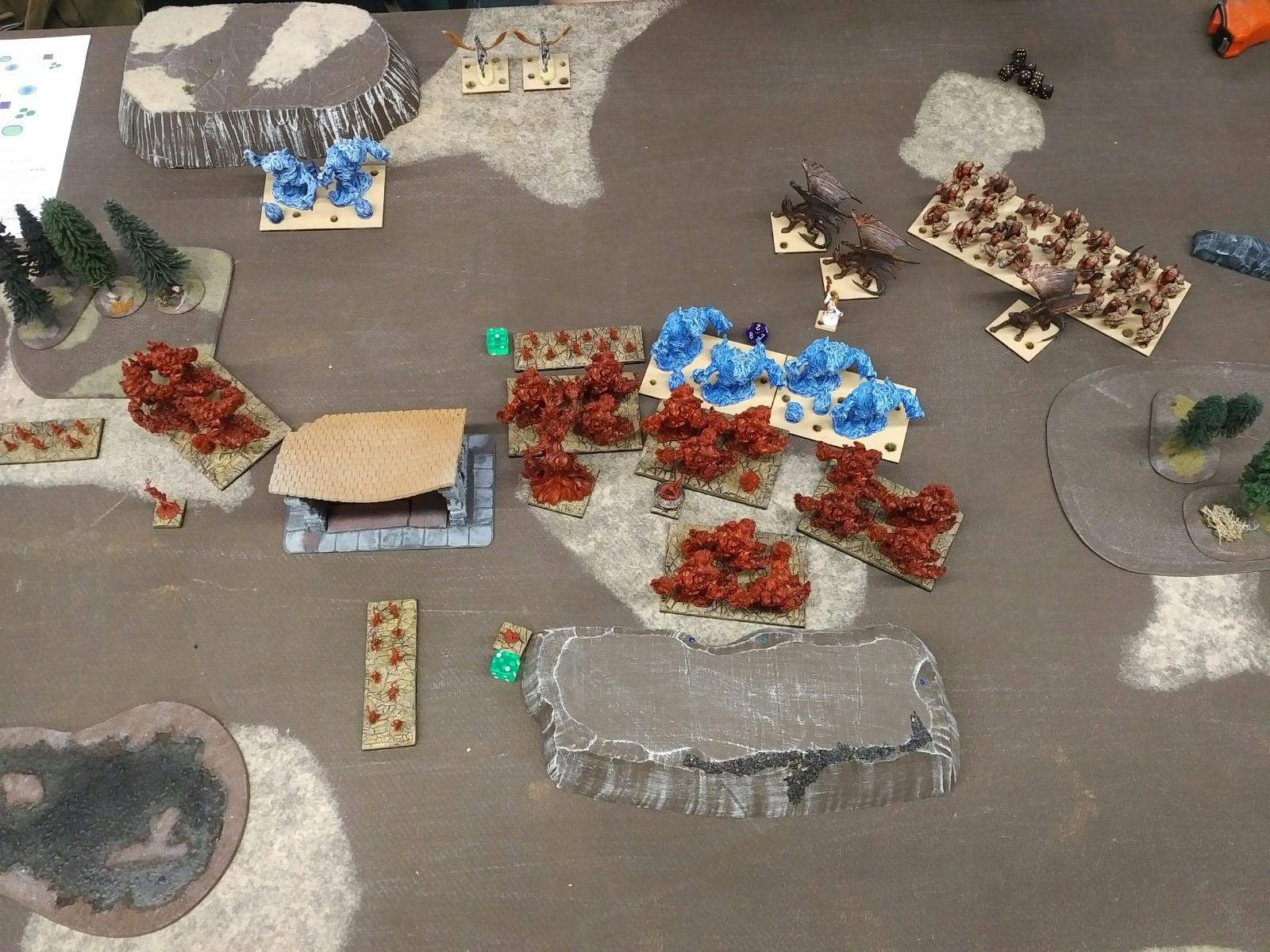 Suddenly released, two of the Water hordes crash into one Fire horde, as the pack of Beasts hop the Salamanders and enter the danger zone. 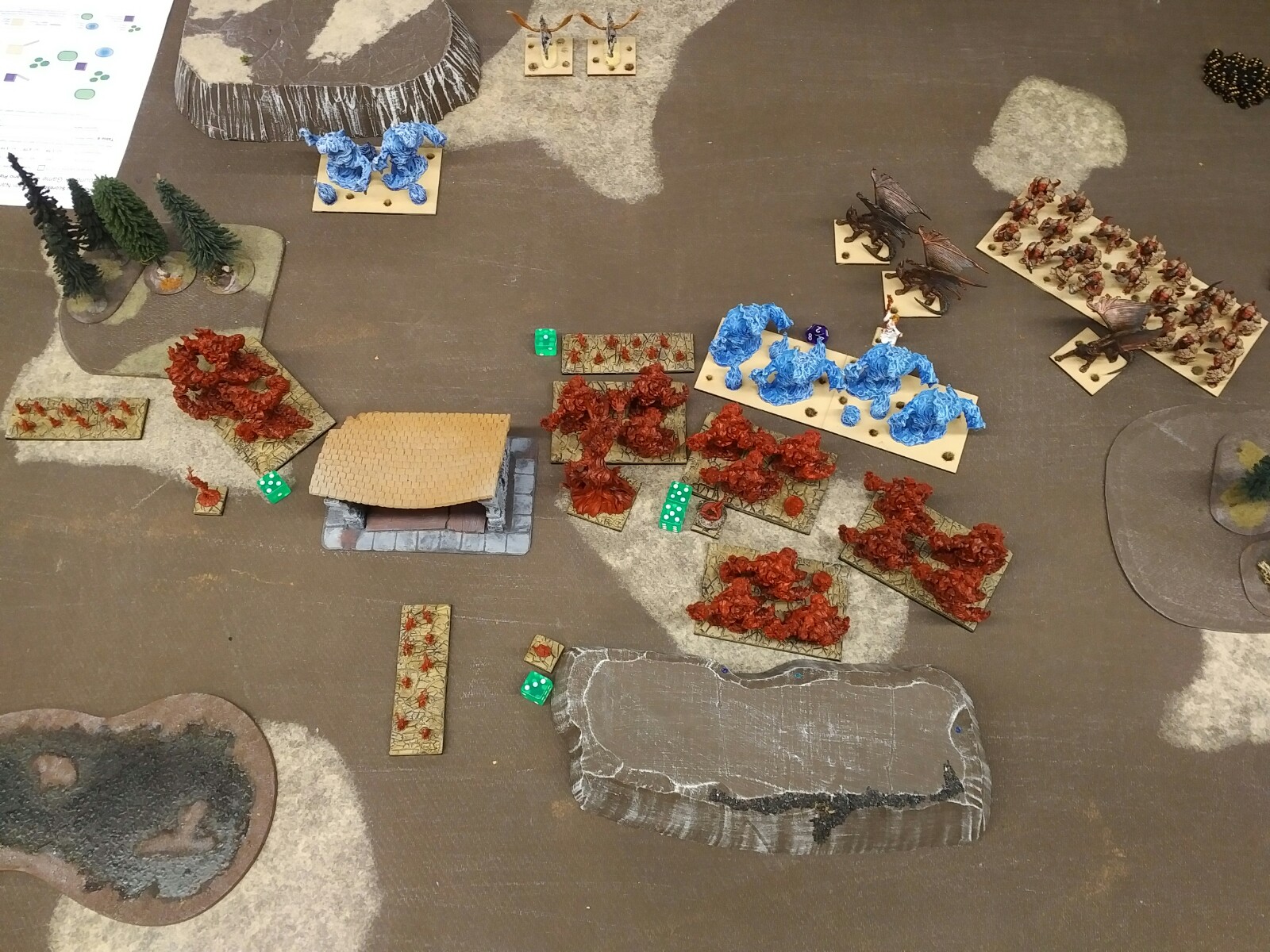 Lightning pounds into the Fire horde on the left flank, but 5 damage isn’t enough to stop their advance. In combat the Water hordes pummel 10 damage into the Fire Elementals however they retain their forms. 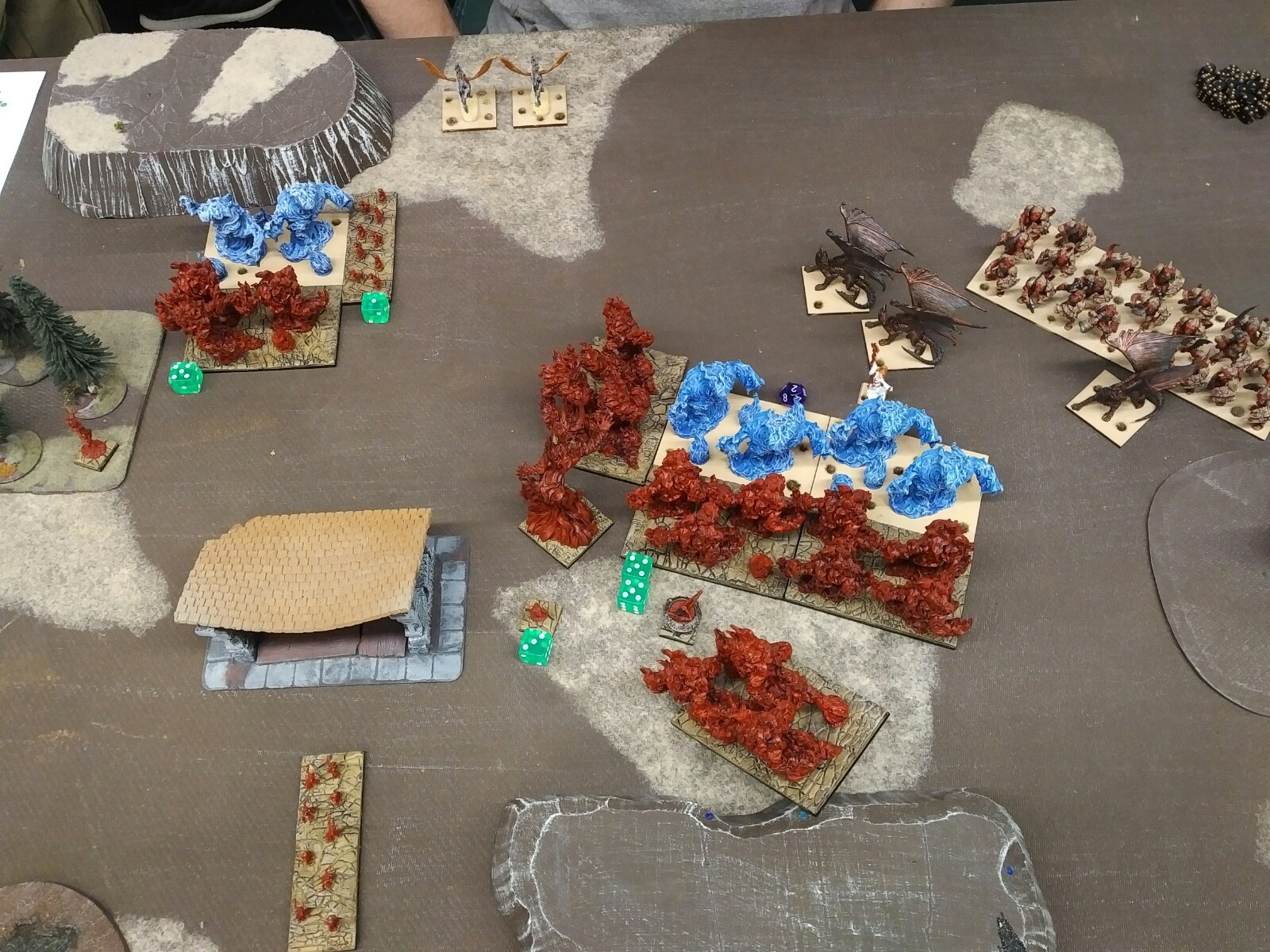 Already in Turn 4, Bloodfire can finally strike back, but will it be enough? The flanking Fire horde makes it into its watery counterpart (and is prayed down to 1 damage and bane-chanted as this is a tough ask of them), with Sprites providing flanking support (lulz). One of the central Water hordes is hit in flank and front by Fire hordes, while the courageous Fire Elementals tackle the other Water horde. 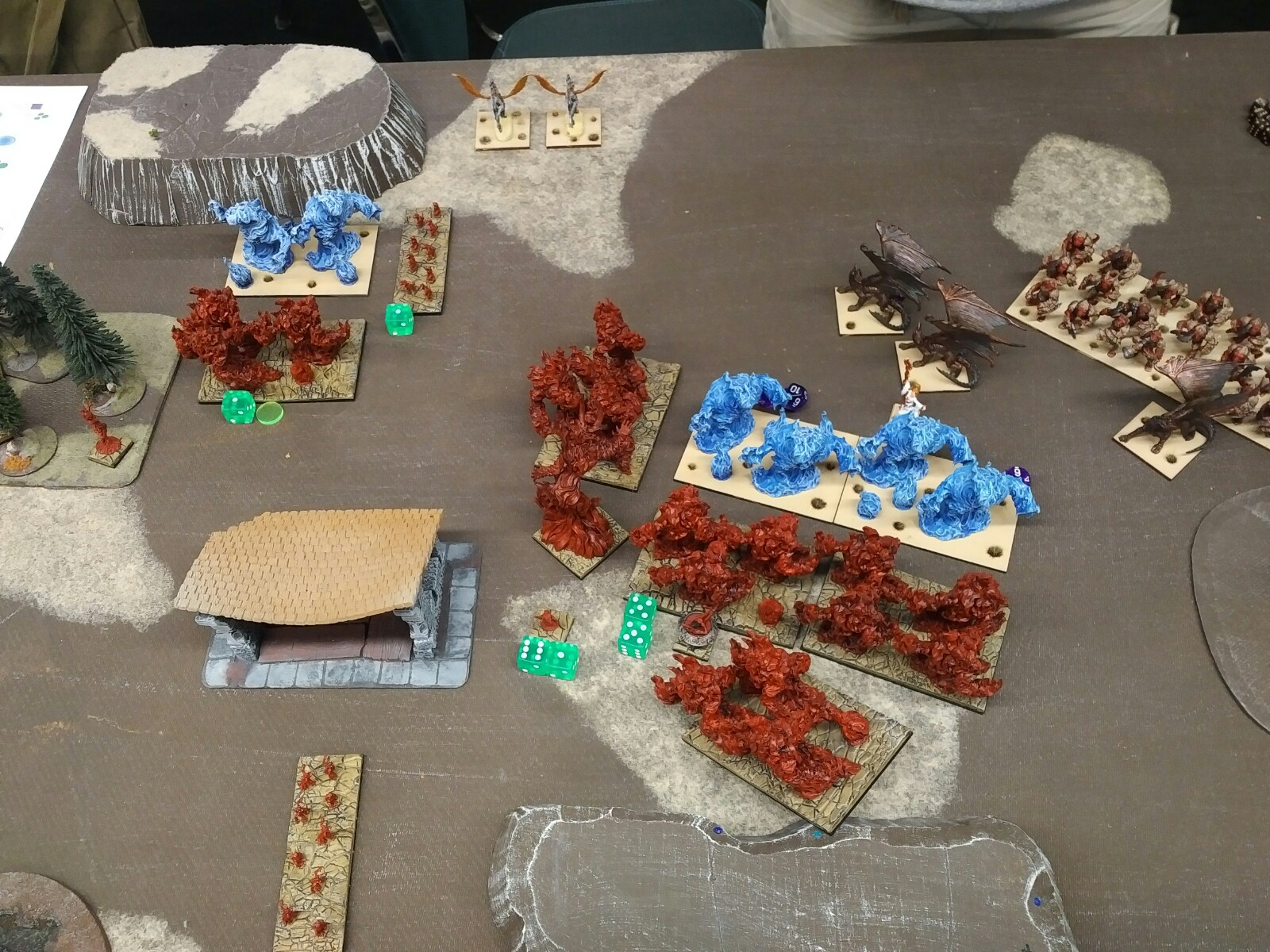 Bloodfire dice roll cold and all of the Nature targets stand. Agnes speared some damage onto a Beast but likewise to no great effect. This is especially disheartening knowing the level of regen and heal available to the enemy . . . 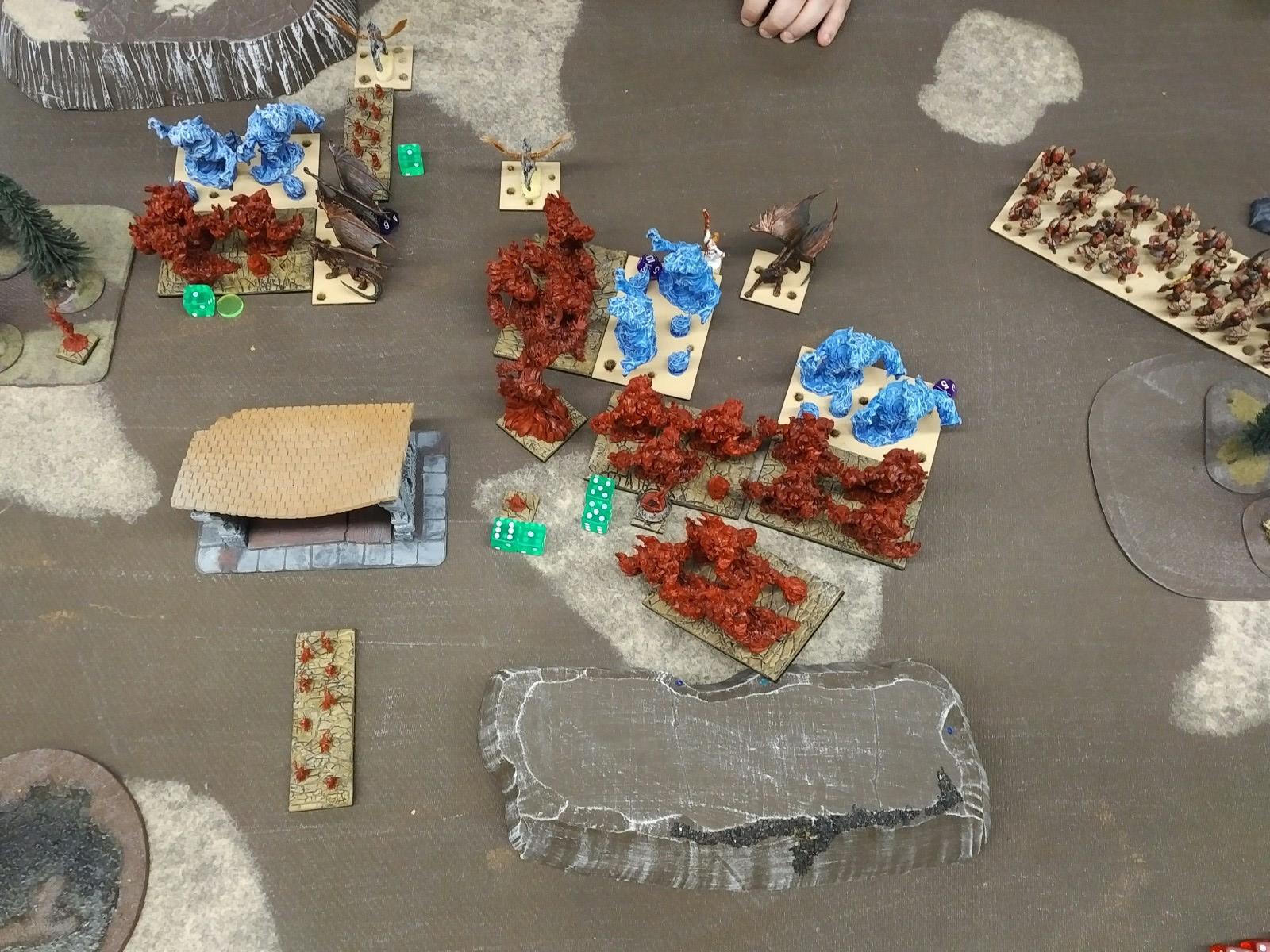 The Forces of Nature properly tighten the noose with a bevy of charges: Water + 2 flanking Beasts into the leftmost Fire horde (!), Unicorn into their Sprites flank, Water hordes into the undamaged central Fire hordes. 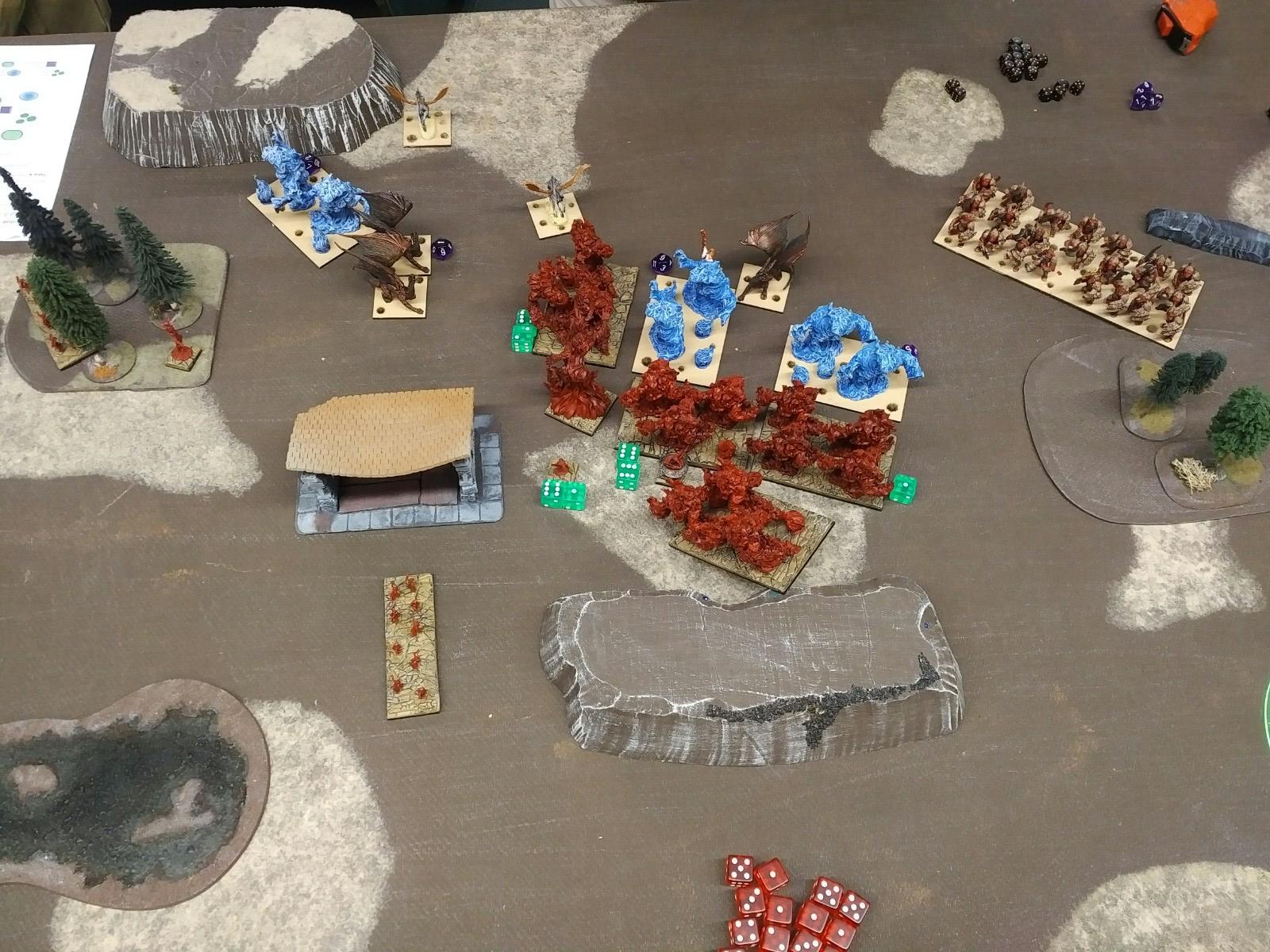 The Beasts smash apart the flanking Fire Elementals and the Unicorn scatters the Sprites (*golf clap*), however the center holds better than expected, including the damaged Fire horde holding despite the lightning barrage of the central Beast. Unfortunately a lot of damage is pulled off of the previously damaged Water horde. 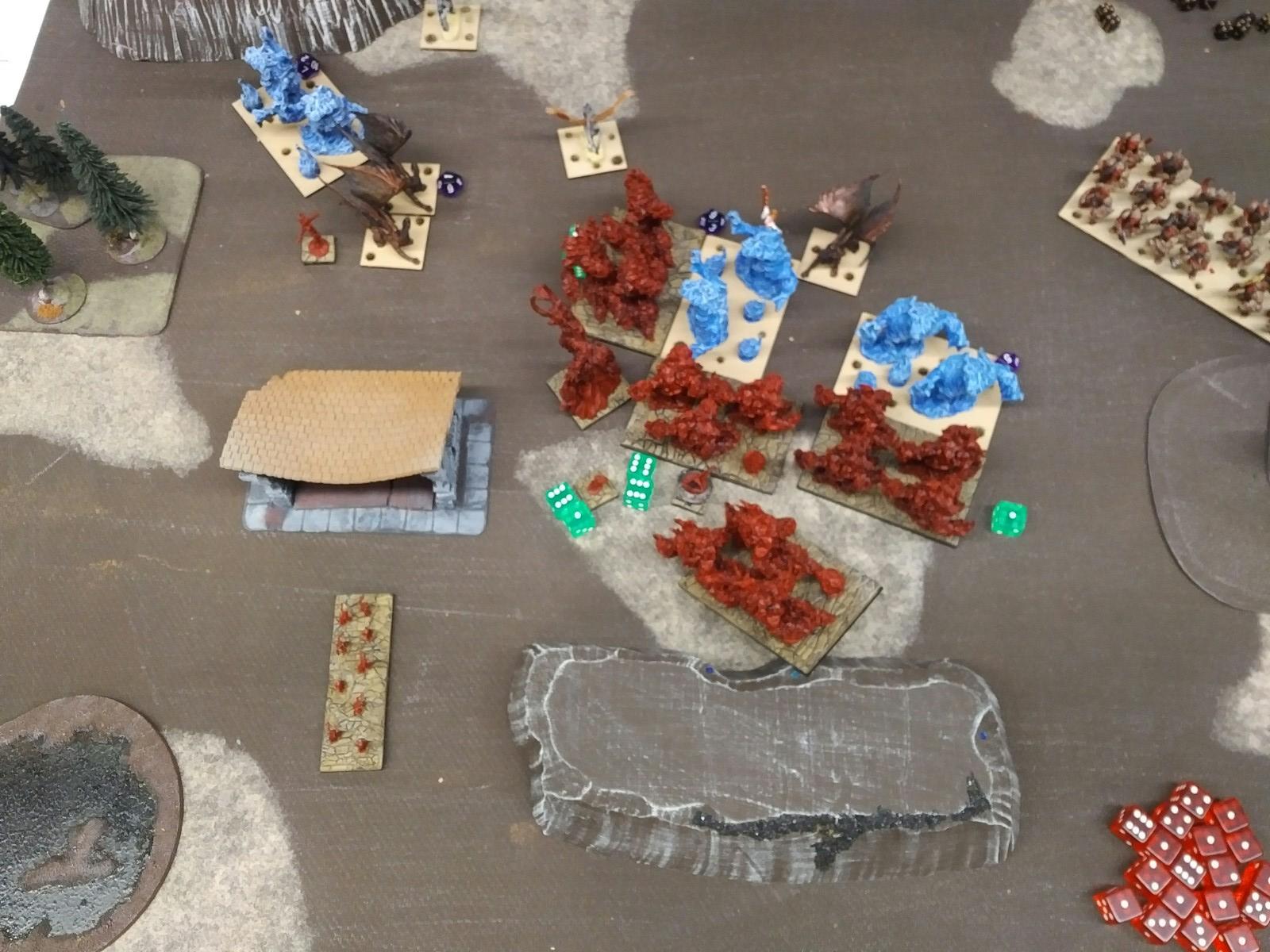 Bloodfire 5 is as violent as ever, with the grind continuing in board center and an overwhelming amount of firepower aimed at the undamaged Beast on the left . . . 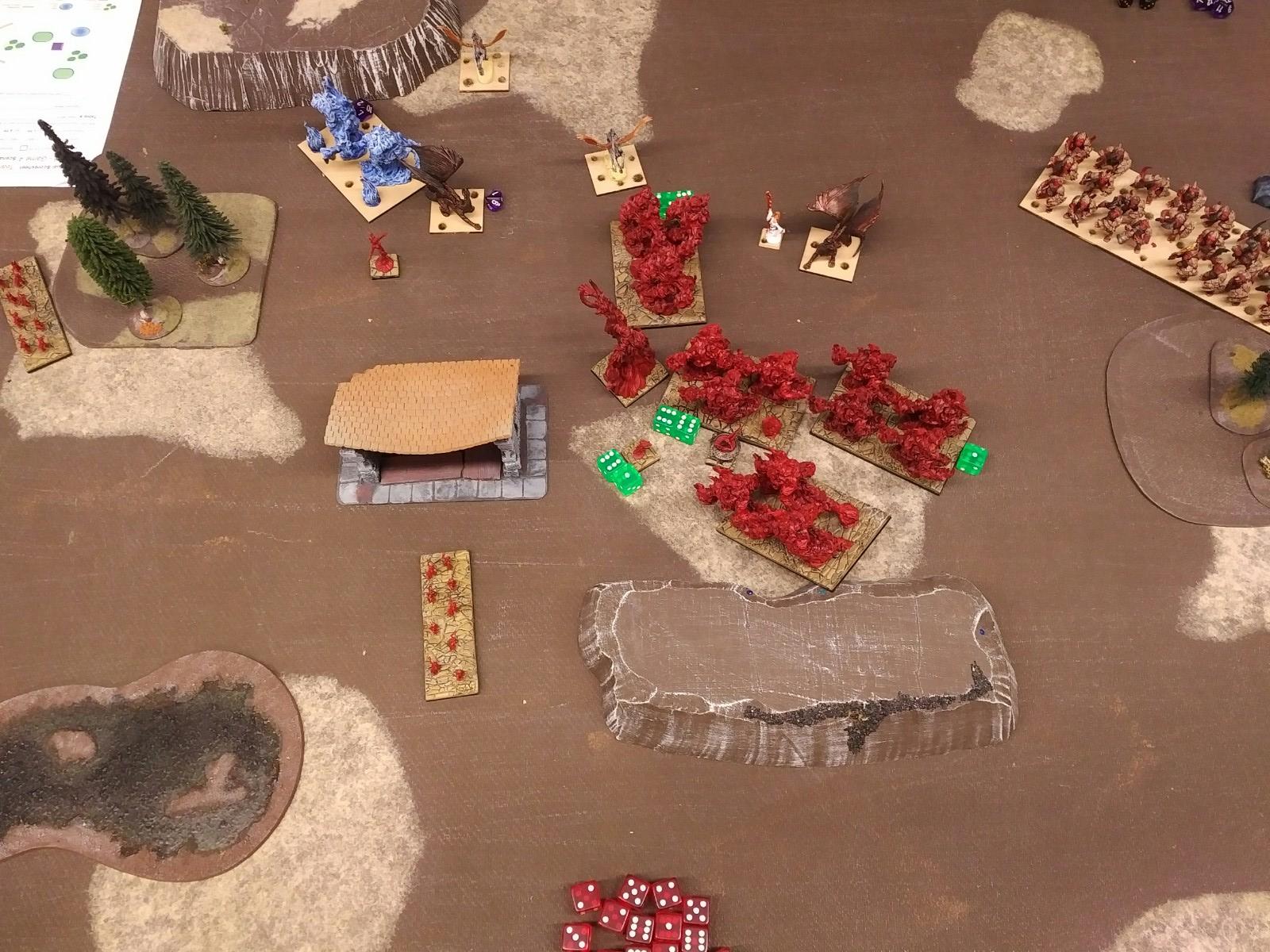 That Beast is decimated with extreme prejudice by Agnes death ray and 20 elite fireballs, followed by both central Water hordes being boiled off. Theres a whole hell of lightning still on the board, but fakk if that didn’t feel good. 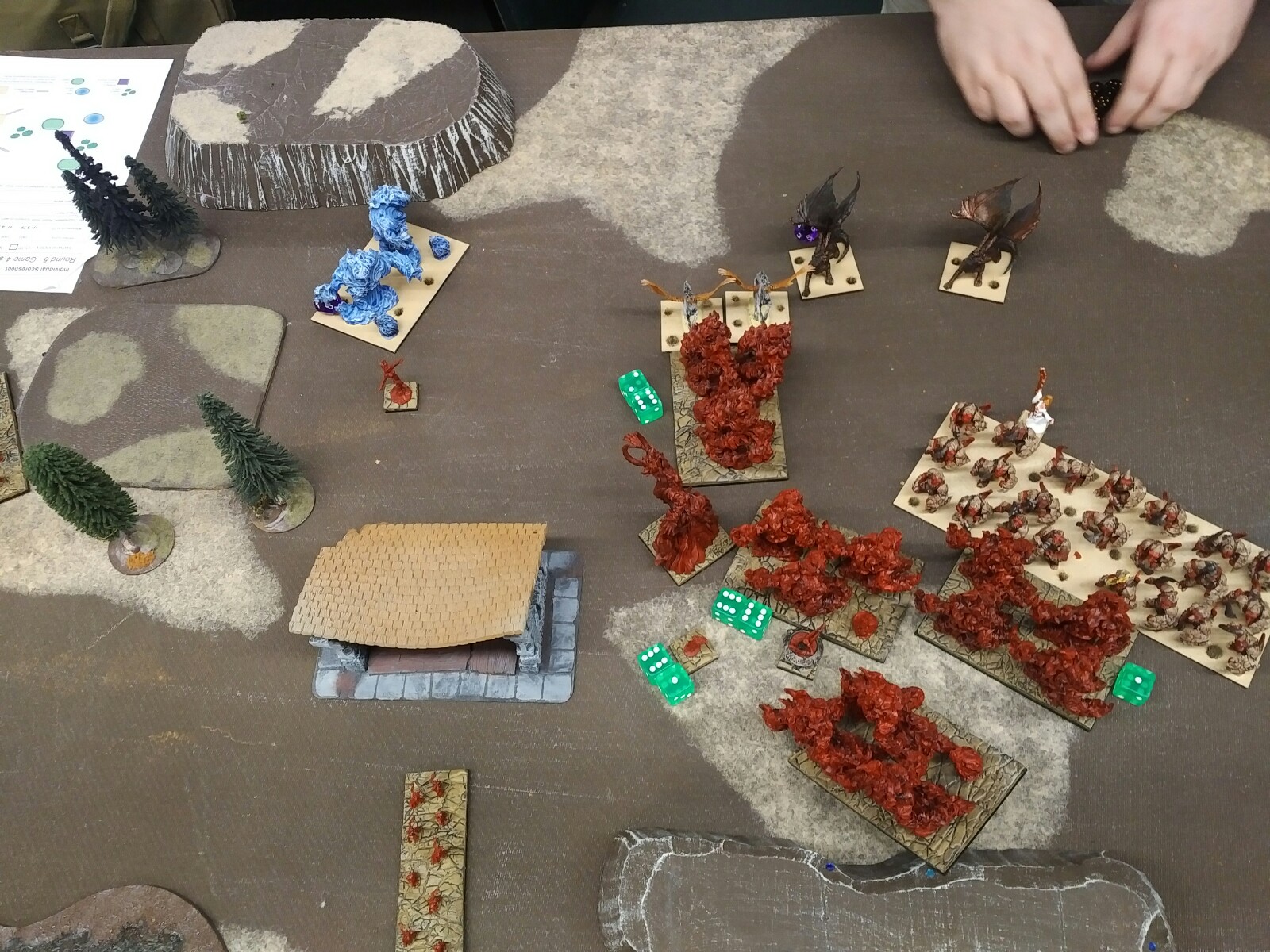 The Green Lady sends her horde of Salamanders into the courageous Fire horde, as the Unicorns swoop into the flank of a smoldering Fire horde (*double golf clap*) and Beasts prepare to exorcise the mangled Fire Elementals. 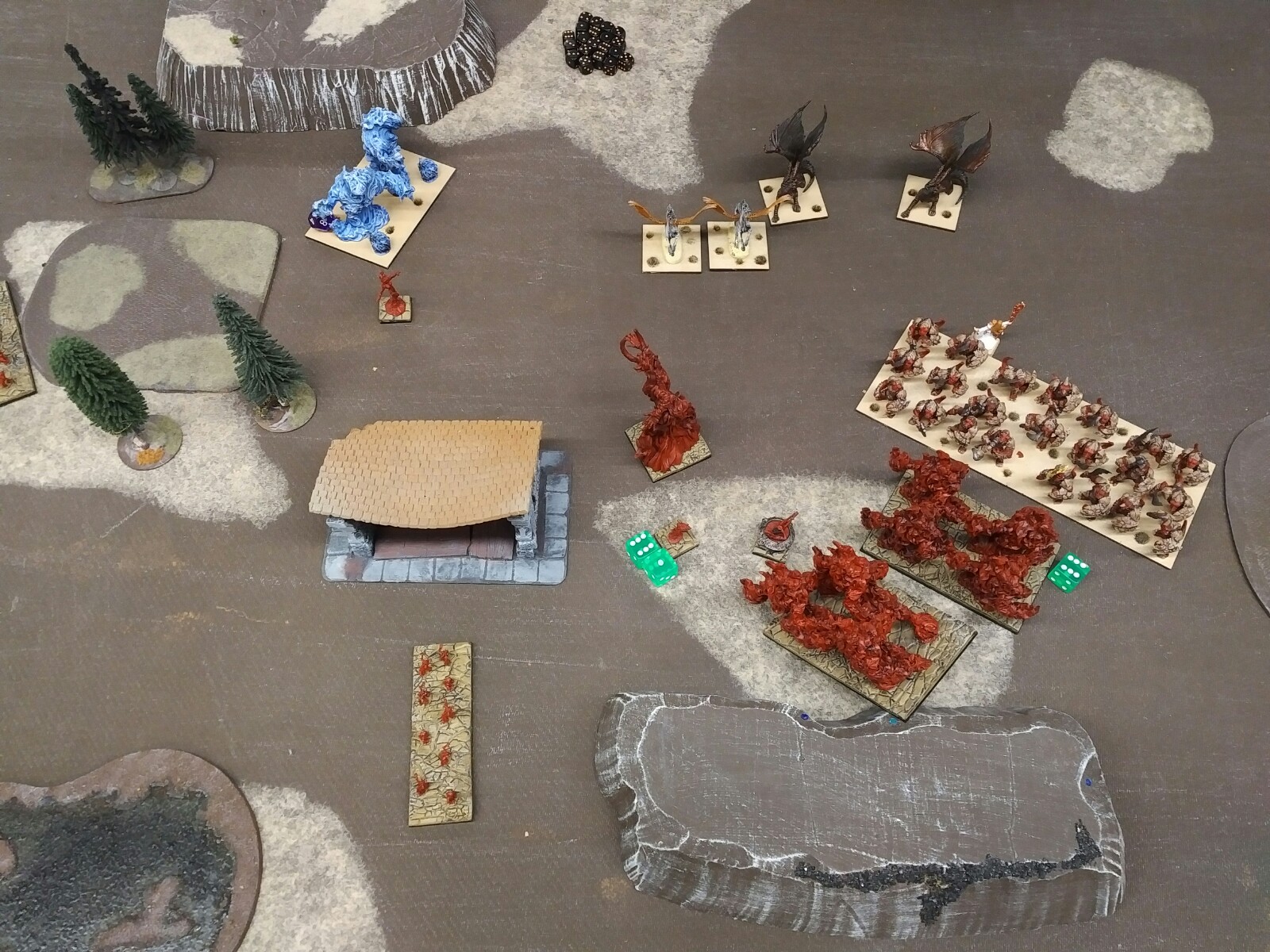 Its super effective! Or at least the Unicorn hooves and Beast lightning is. The Sallies bounce. 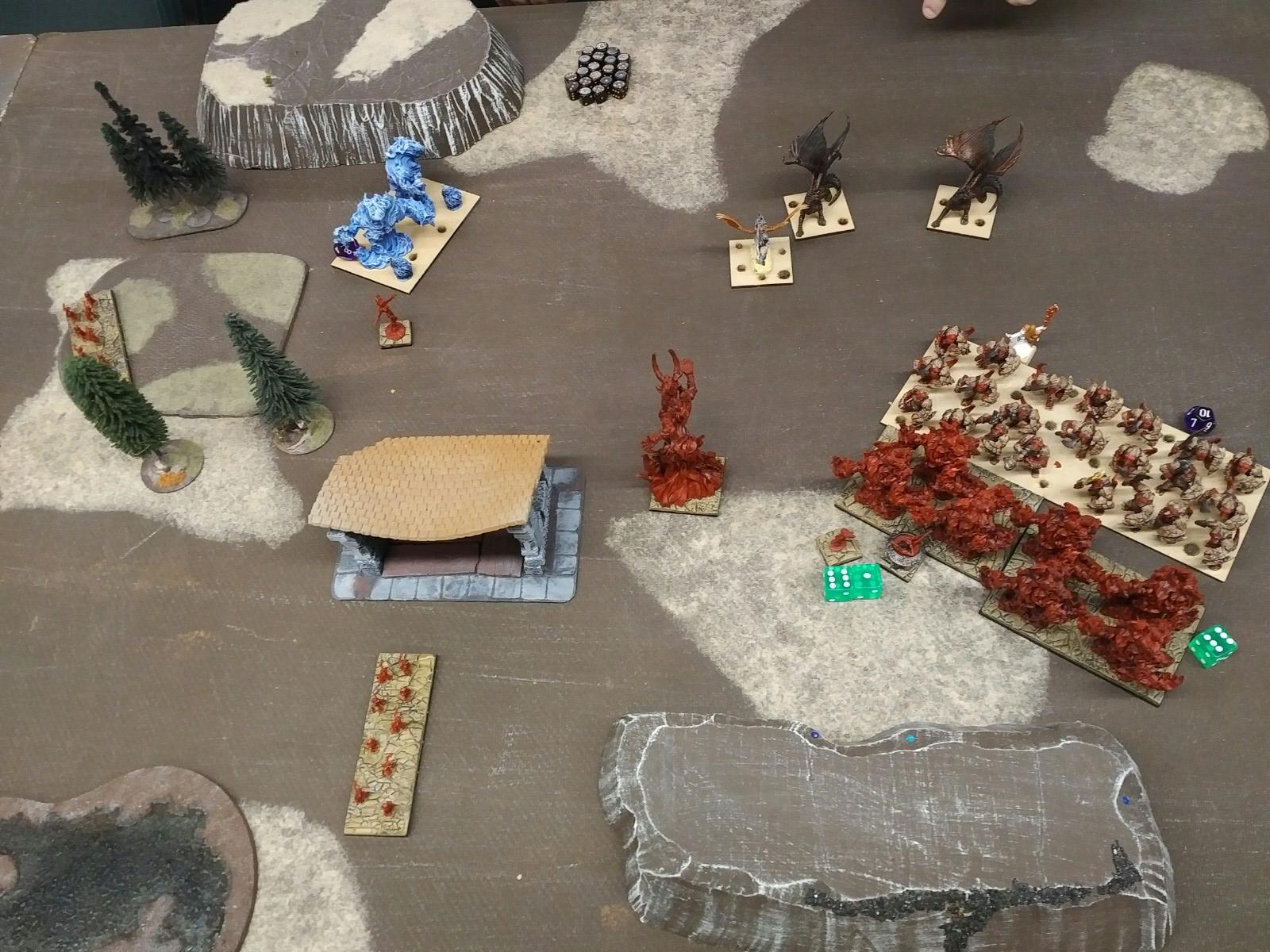 Bloodfire Turn 6 feels like the redementals are well out of this one, yet theres violence to be had. Agnes and the tall Priest cook a Unicorn for reasons and the Fire Elementals bash 10 damage into the Salamanders. 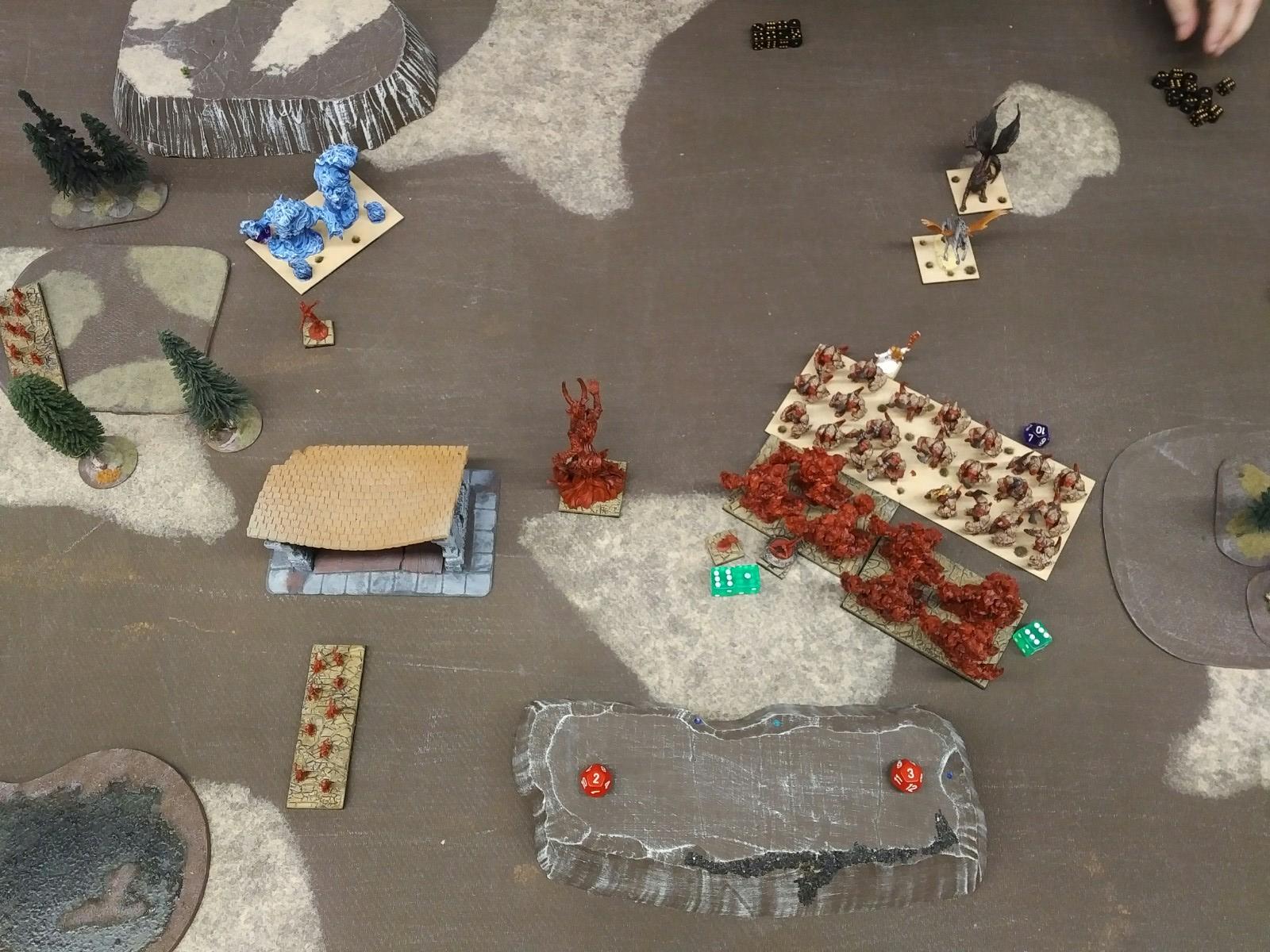 The winged elements of the Forces of Nature scatter to their designated scoring zones as the Salamanders bounce off the fresh Fire Elementals. With no Turn 7 it’s a solid . . .

It was cool to go up against this player again and see how far his skills have come, and also pretty neat to have an Elemental Off, and in fact a Reaper-minis-painted-basically-one-color-on-tan-bases off XD 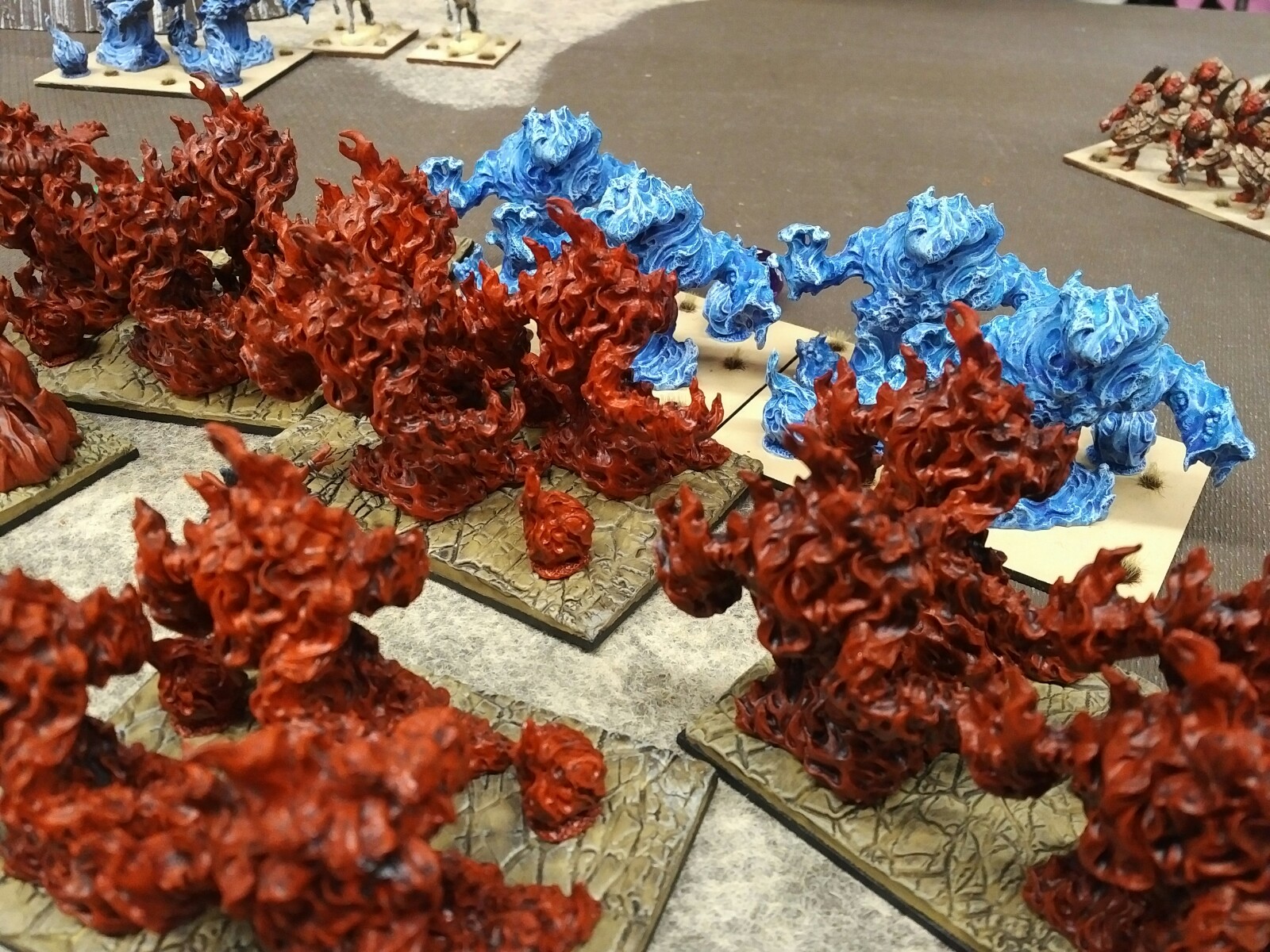 I do think Beasts of Nature are OP and really unpleasant to play against, and I sort of wish Nature armies weren’t so often this min/maxed affair were you just take the best things, and multiples of them if they shoot lightning. But then again I’ve also played against non-min/maxed fluffy Nature and consistently torn them to shreds, so who knows. Maybe the Beast is just the crutch of the army? And one you gradually work out? Again ala Death Engines for rats.

Anyway, while I dont know the final standings for Crossroads 2018 Im sure Cuddle Time was quite far down there, given our in-game performance at the very least. All the same, it continues to be a great event with great players and Im happy I could make this year. It sounds like next year is teams again, which Im grudgingly ok with – I totally prefer the simplicity of single player tournaments and the clarity of how matchups are done, but the increased camaraderie of team tournaments is fun, and I enjoyed making swag for our team (CUDDLE TIME t-shirts, DTC wristbands, cutesy display boards).